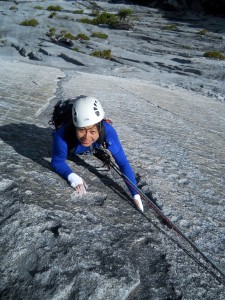 Shirley on the Blue Crack pitch.

Tuesday night (3rd of July), two days after the quick Leavenworth trip, we’re back on I5 heading north again. It’s raining at the (creepy) Darrington trailhead and for a moment we think about bailing to Leavenworth again. But we’re too lazy to drive any further and so hit the sack instead. I hear rain throughout the night and figure the forecast for OK weather was wrong. By morning however sunshine is poking through the clouds and so we start the hike. The bushwhacking-ish trail soaks us thoroughly and the stream crossing (running high) finishes the job. Fortunately the day warms up by the time we reach the start of Dreamer (10 pitch , 5.10b). We were planning on swapping leads but the route looks wet and so I offer to lead till things dry up…they never really do. We do the Dreamer Direct start pitch and then the Urban Bypass. Higher, the climbing is time consuming as crossing the wet streaks requires some delicate movement (with much forethought esp. when it’s somewhat above gear). The route is sustained and the climbing nicely varied. Perhaps next time I’ll read the route beta more carefully. The talk of 7 inch (Blue) crack (which is probably no harder than 5.7) made us lug some OW cams…I end up placing three pieces and none is larger than a #2 Camalot. The “9+ traverse” on the pitch above is soaked and covered in slime. A touch of A0 gets us through the wet section. Rest of the route offers some more knob climbing terrain. The raps go mostly smoothly except for two instances where the ropes catch around flakes below us (easily fixed). Car, redbull, fast-food dinner, home. 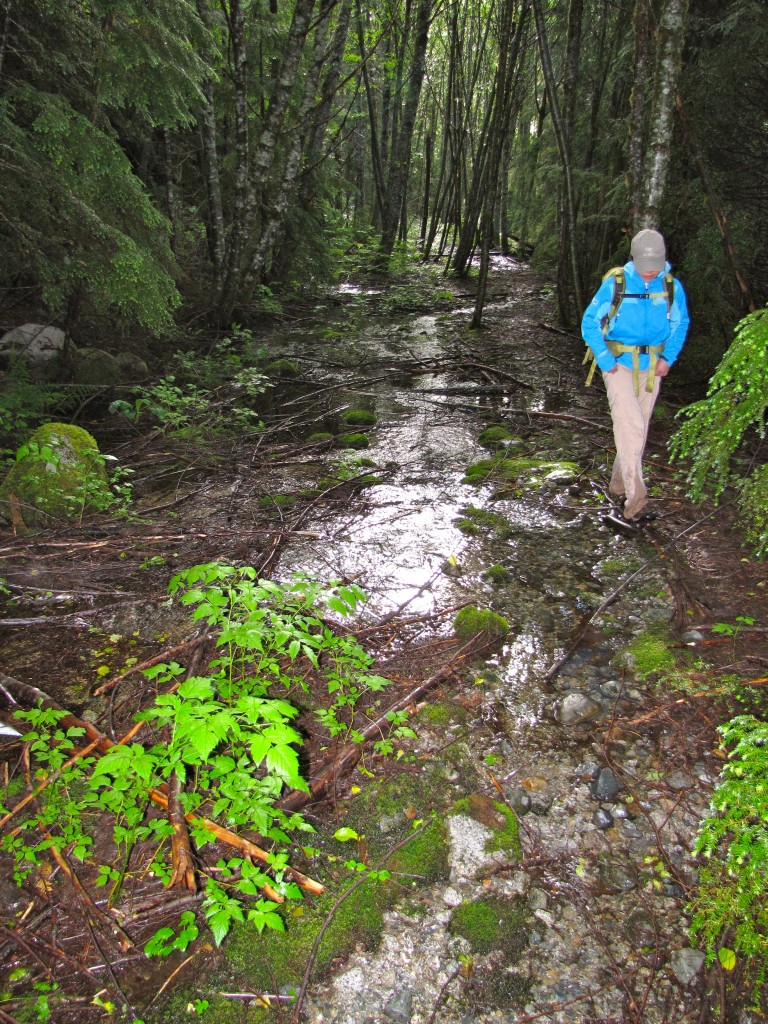 Shirley on our approach to the Green Giant Buttress via a moist forest service road (July 2012). 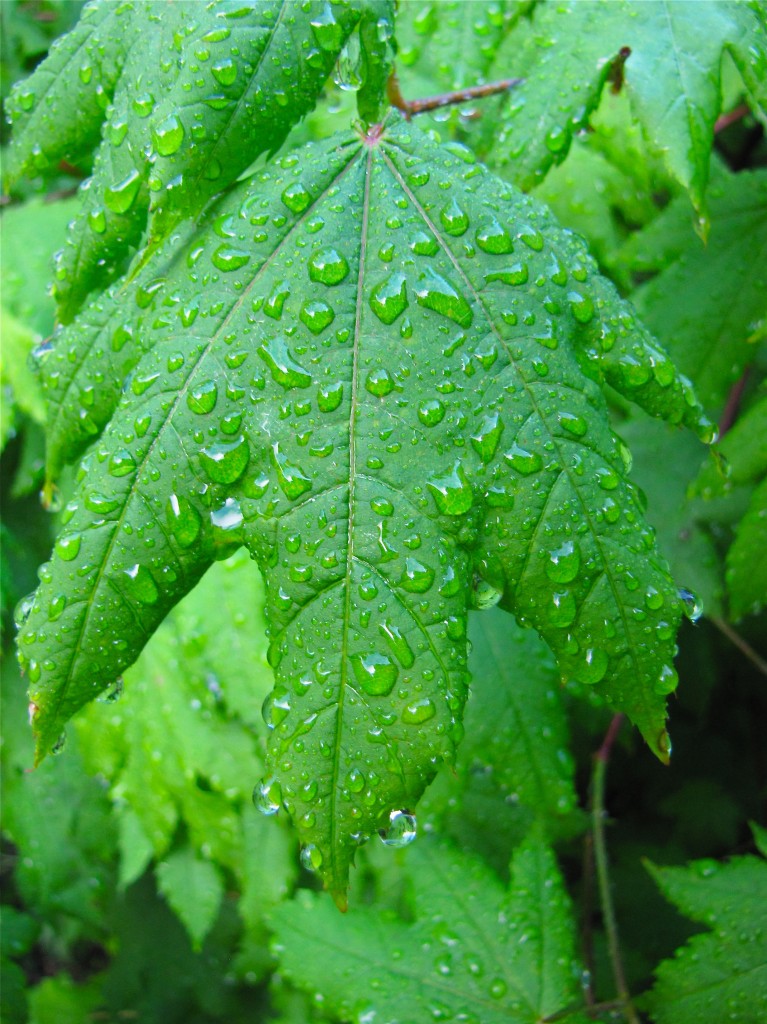 We got thoroughly soaked on our morning approach to Dreamer. It was raining the night before till wee hours of the morning (July 2012). 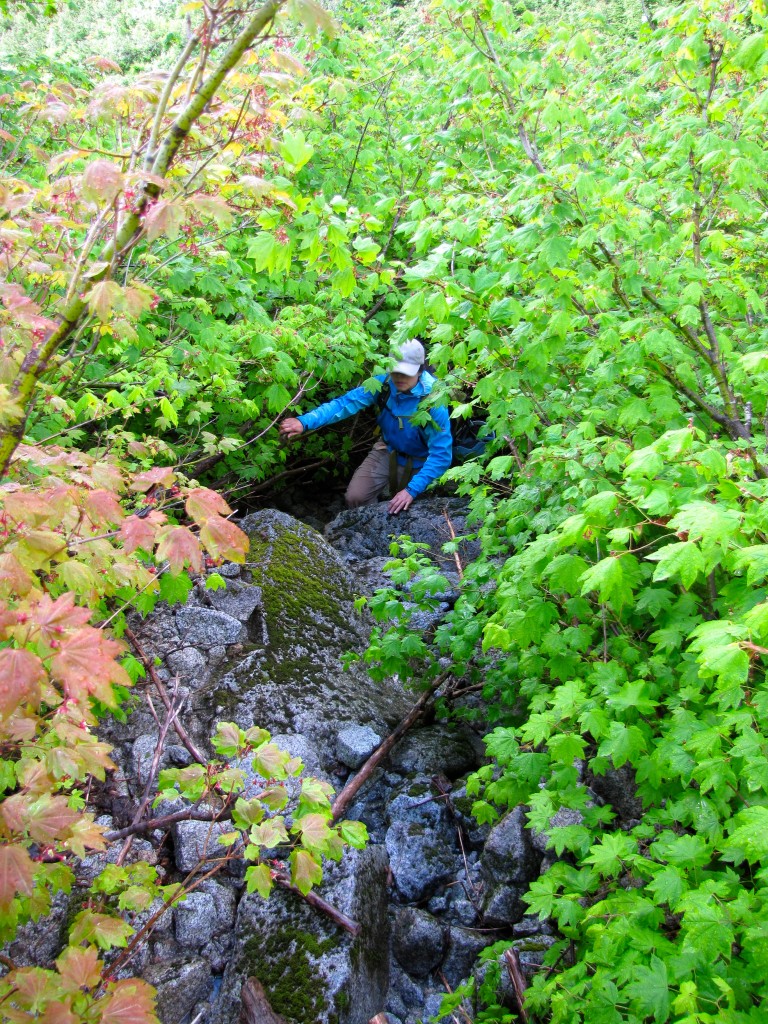 Some light bushwhacking on the approach to Dreamer (July 2012). 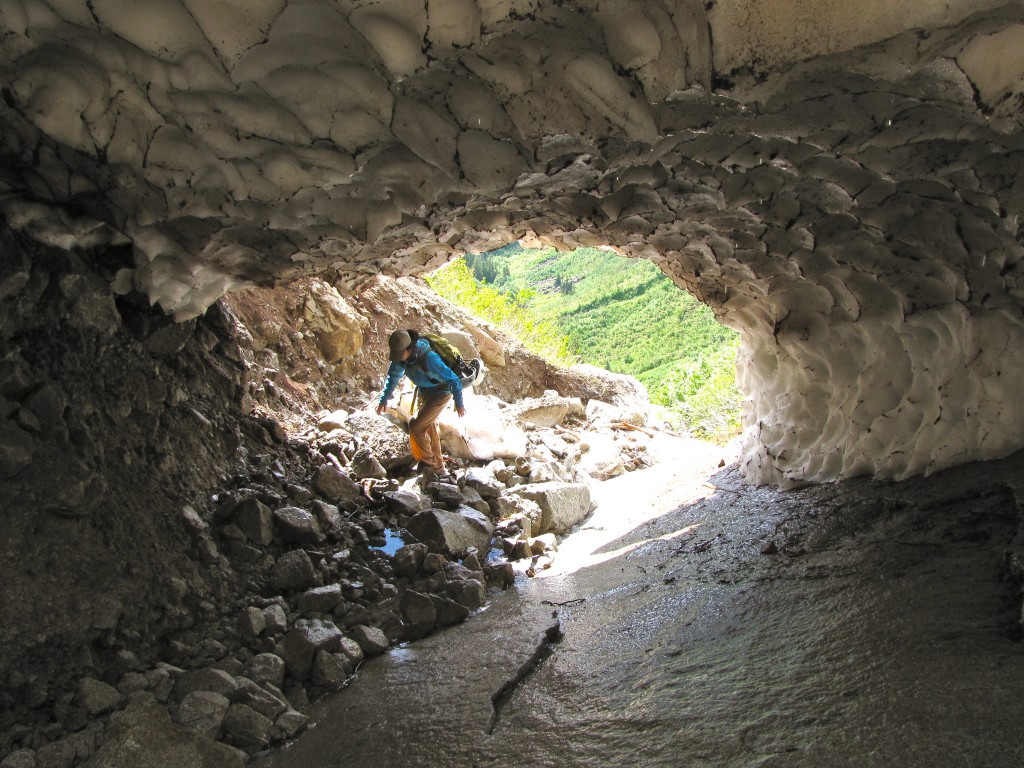 Shirley hiking up to the start of Dreamer. A cool little snow tunnel in the final approach gully (July 2012). 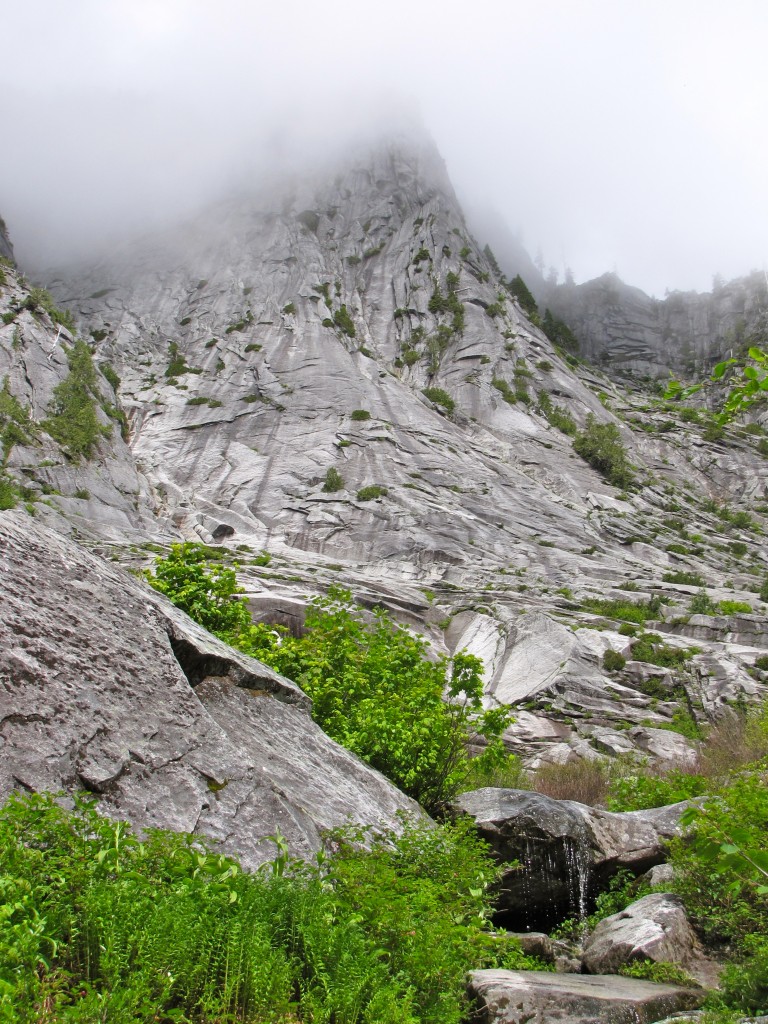 Green Giant Buttress on our morning approach. Things were not looking promising before the sun started to break through the clouds (July 2012). 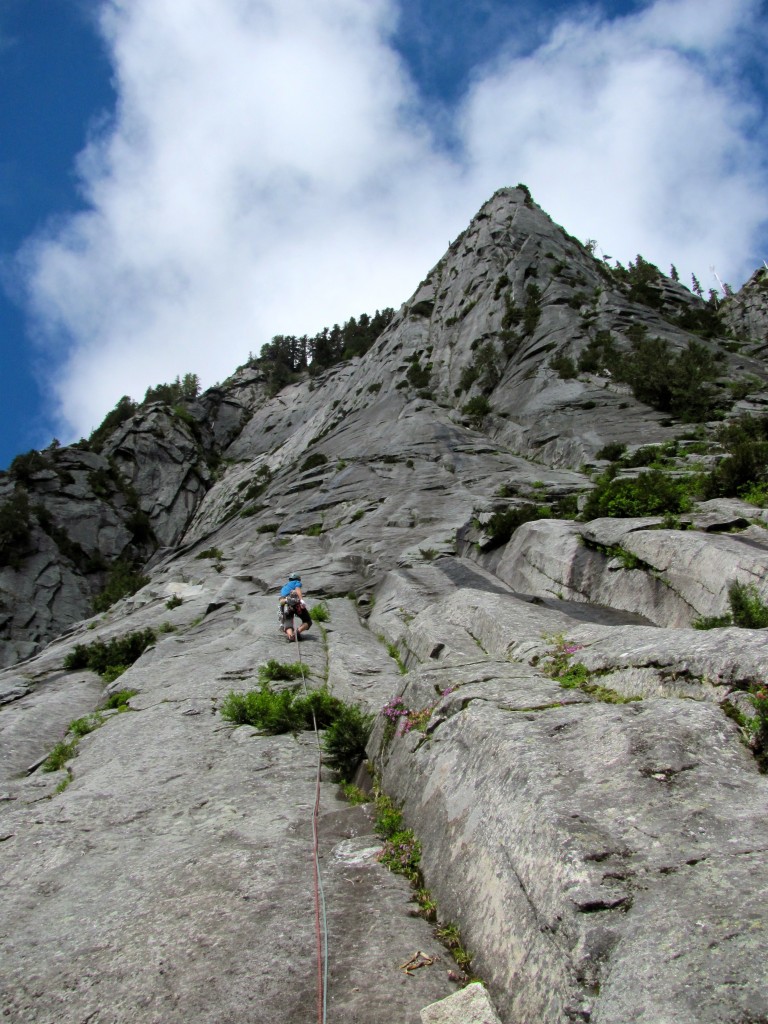 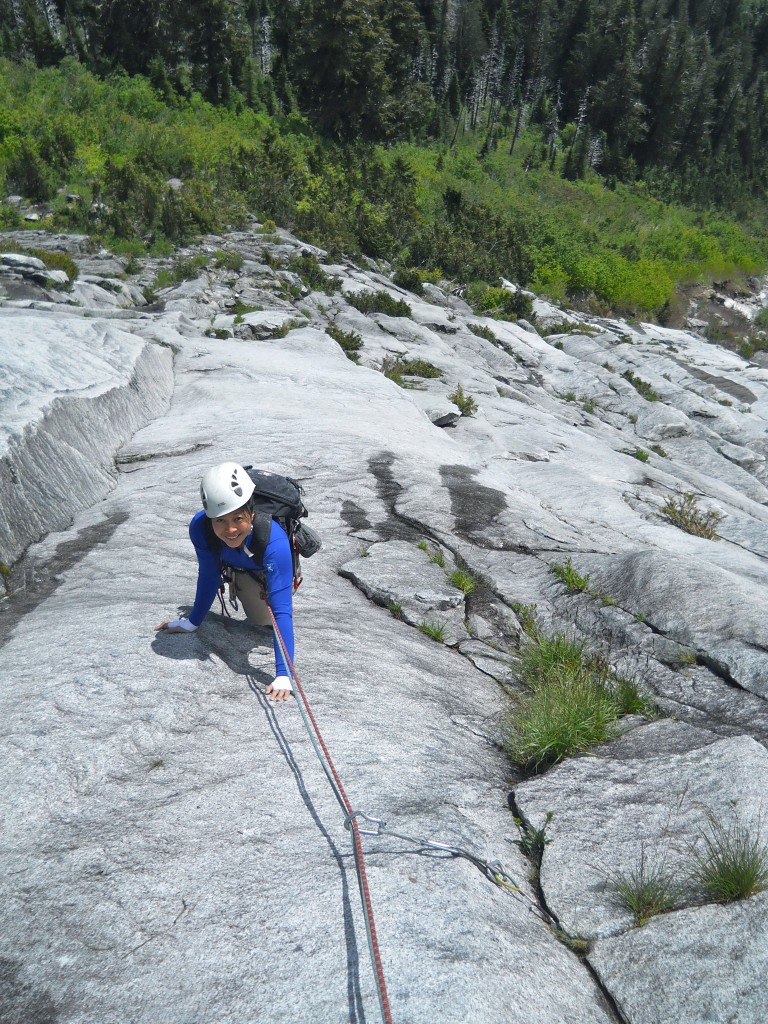 Shirley topping out on the Dreamer Direct pitch (our pitch 2; July 2012). 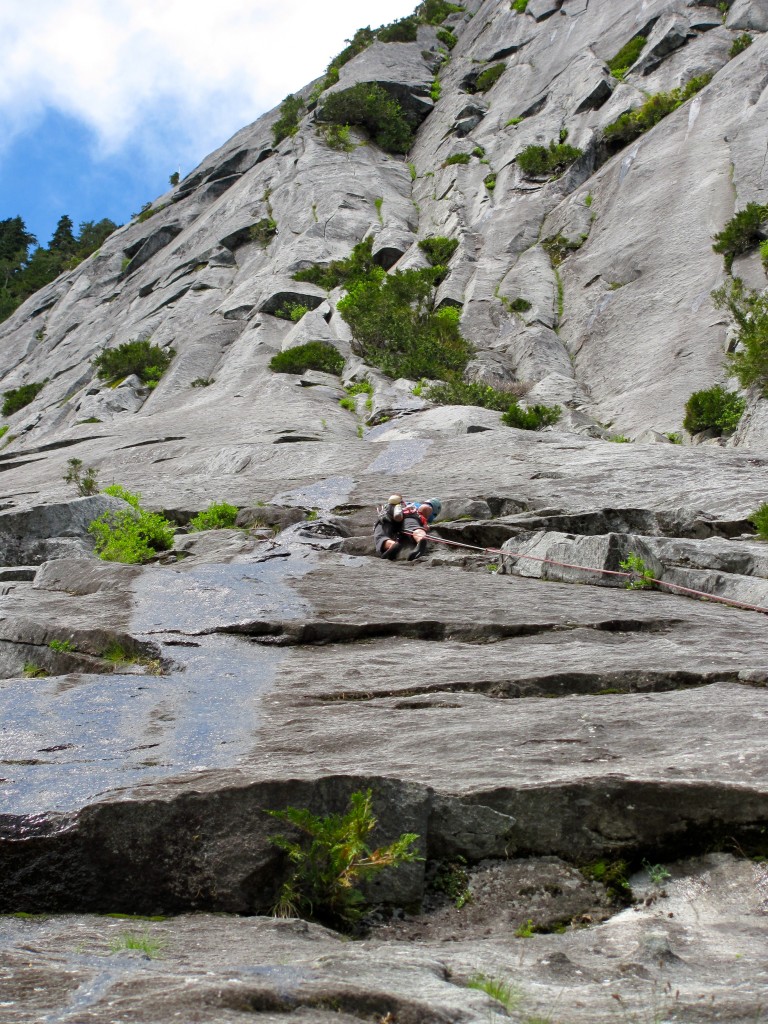 Leading the “connector pitch” between Dreamer Direct and Dreamer proper route…the crossing of the stream above took a bit of thinking (July 2012). 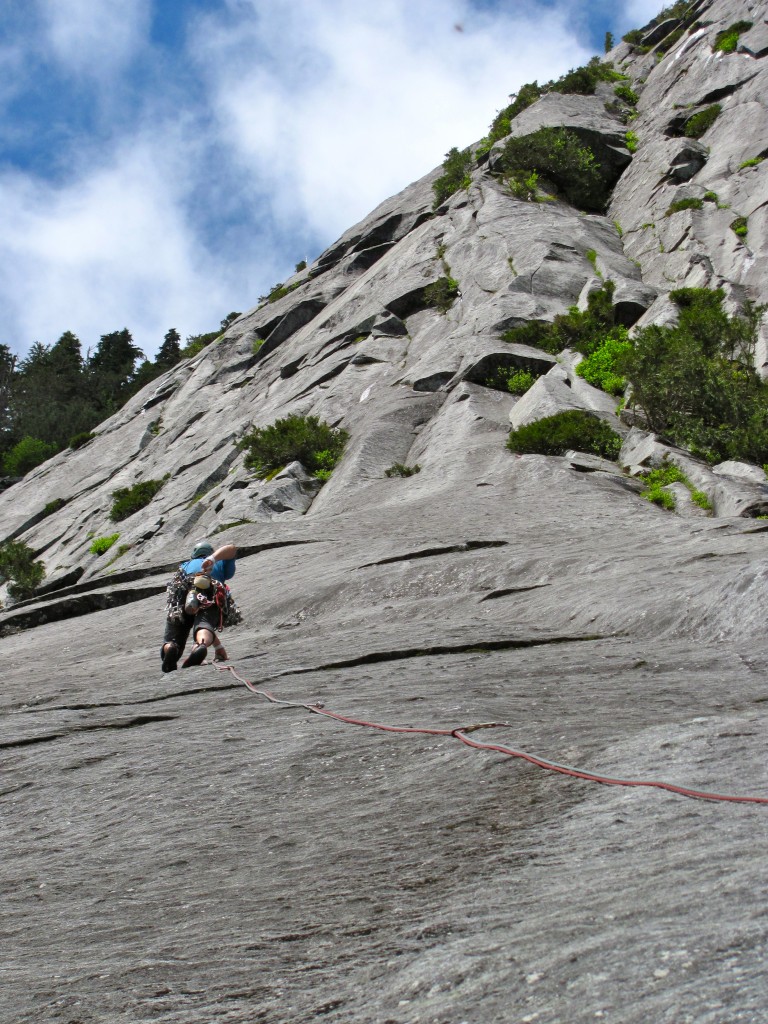 Leading pitch 3 variation of Dreamer (called the Urban Bypass and rated 5.10b). Climbing is not too hard until the 2 moves below the last bolt (July 2012). 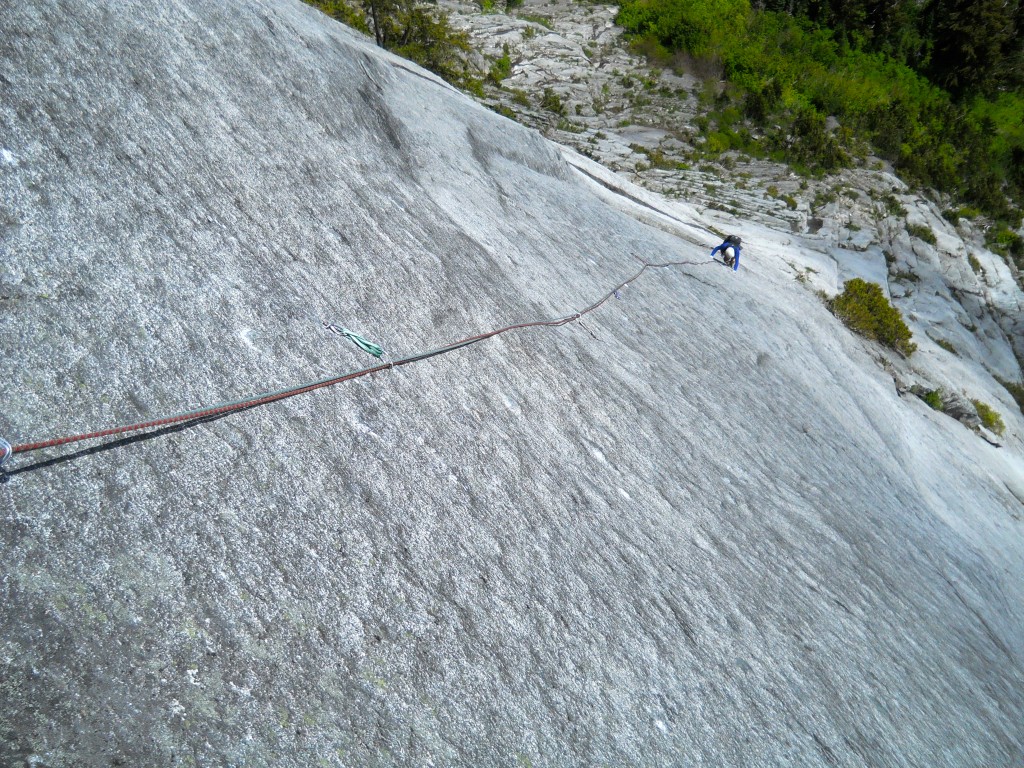 Shirley on the perfect granite of the Urban Bypass pitch (#3 variation on Dreamer; July 2012). 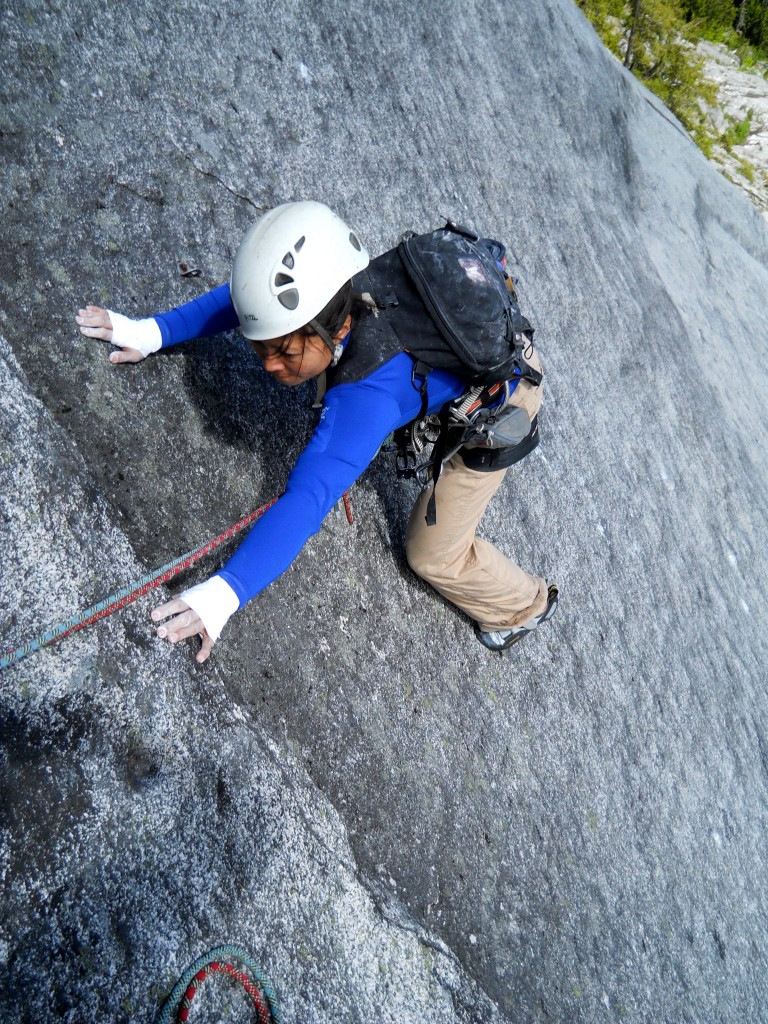 Shirley topping out on pitch 3. This is the top of the Urban Bypass (5.10b) variation. This last clip at Shirley’s feet is the crux of the pitch (July 2012). 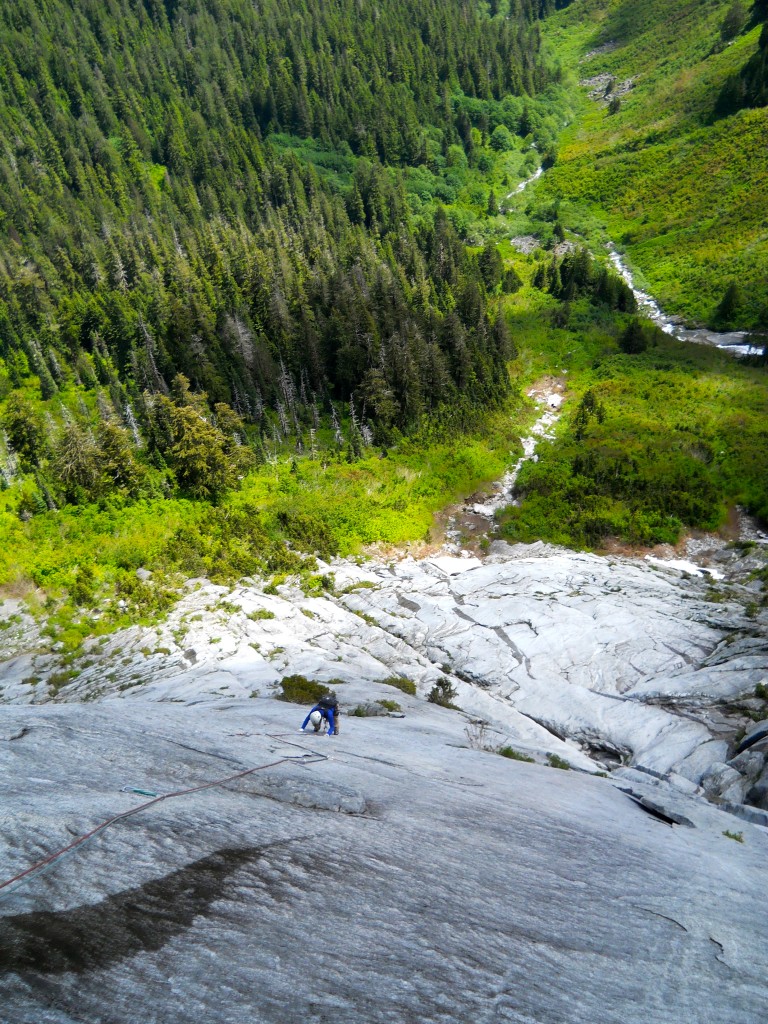 Shirley on pitch 4 of Dreamer. These wet/running patches provided moments of deep reflection at times (& some slow climbing; July 2012). 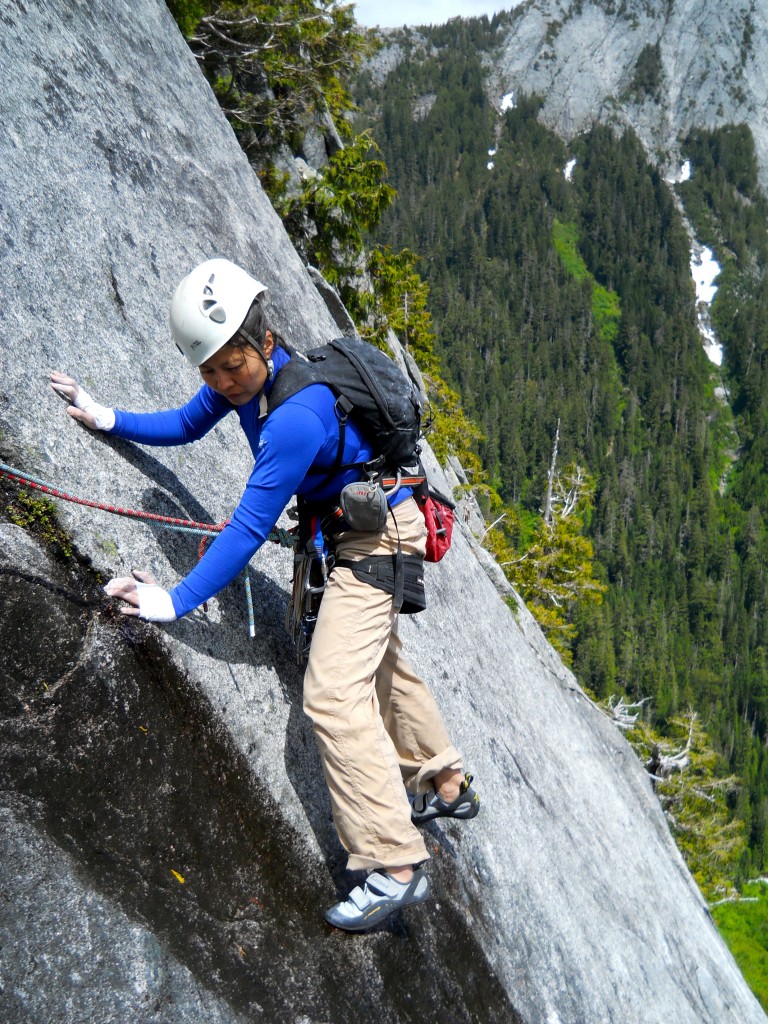 Shirley crossing the wet patch (again) at the top of pitch 4 of Dreamer (July 2012). 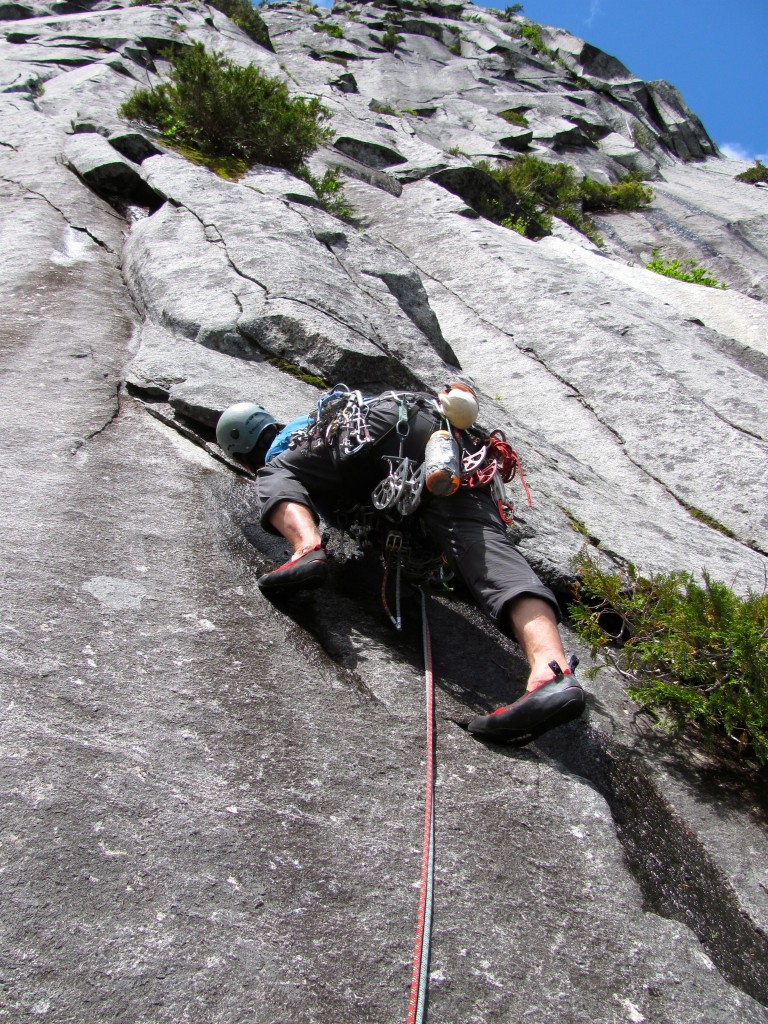 Starting the lead of pitch 5 of Dreamer. Much seepage in the corner above me (July 2012). 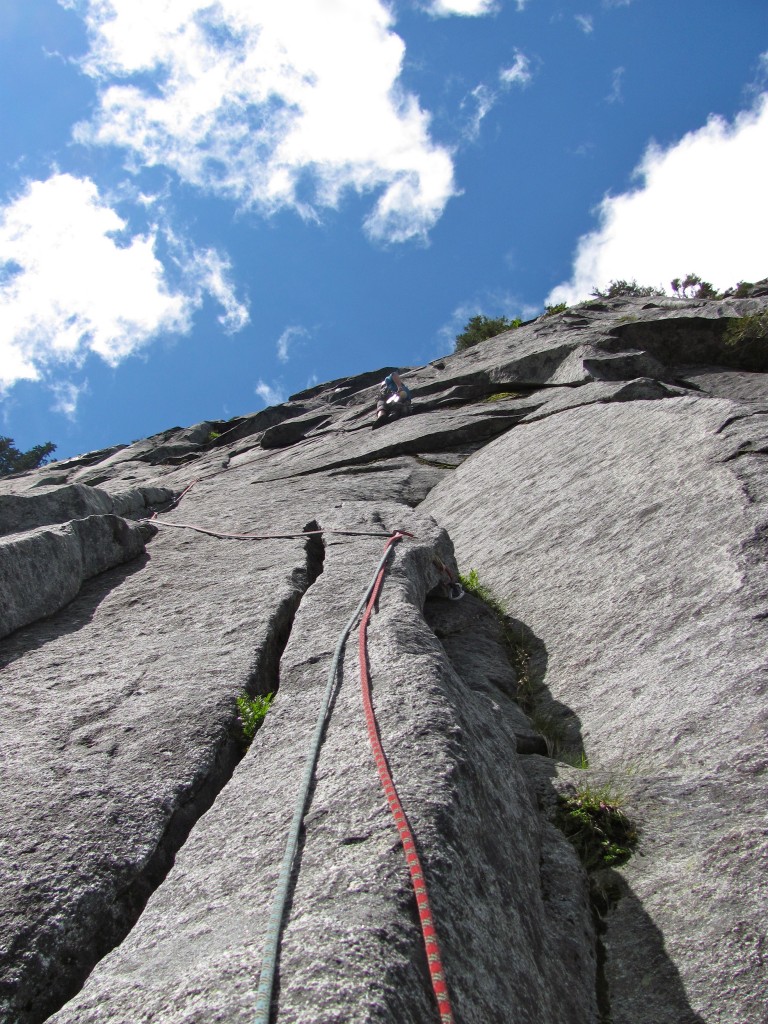 Leading the undercling section on the lower half of pitch 6 of Dreamer. “Blue Crack” is just above (July 2012). 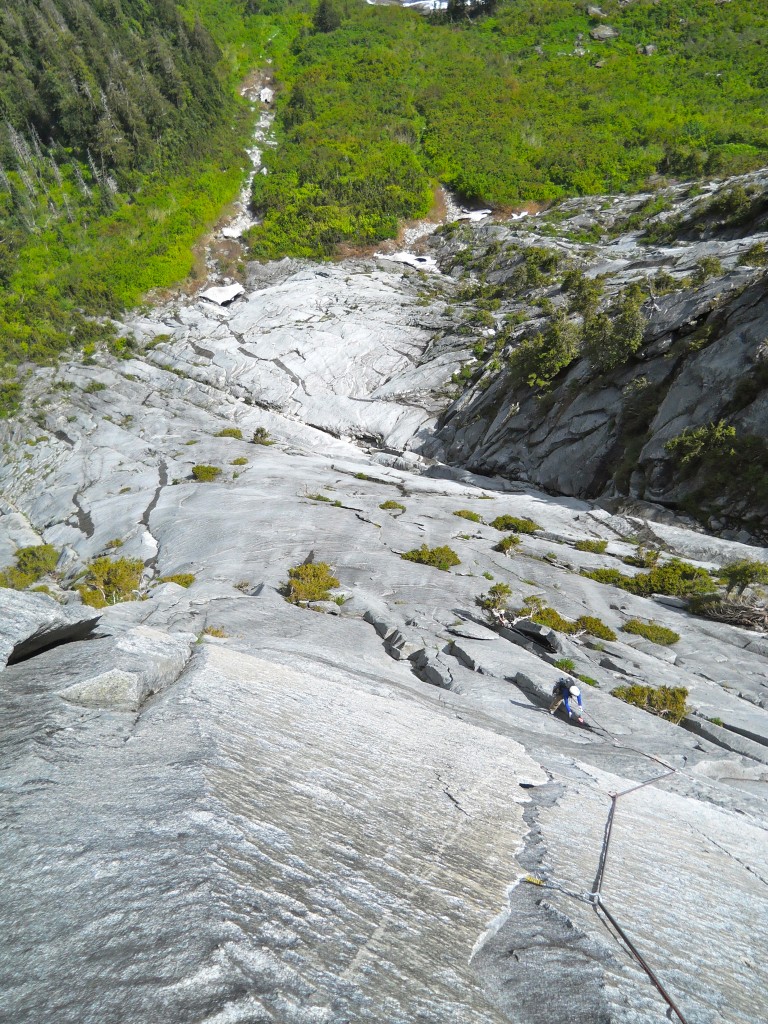 Shirley on pitch 6 of Dreamer – view is from the top of the “Blue Crack.” Think this was the funnest pitch of the day (the fact that it was completely dry might skew the survey; July 2012). 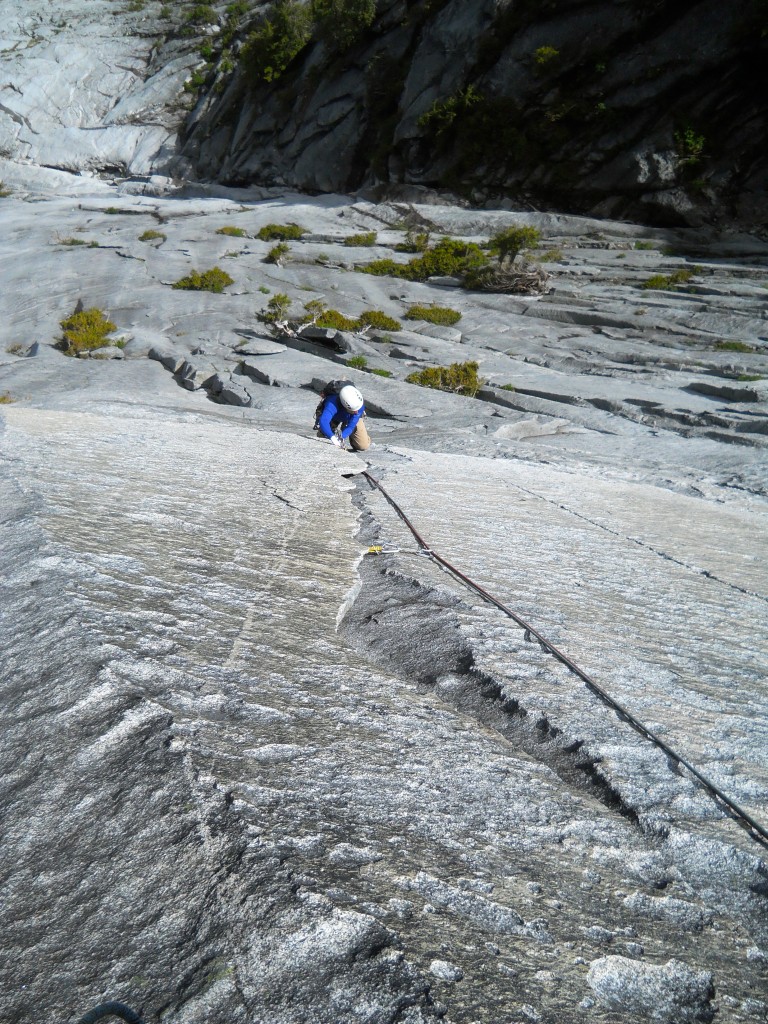 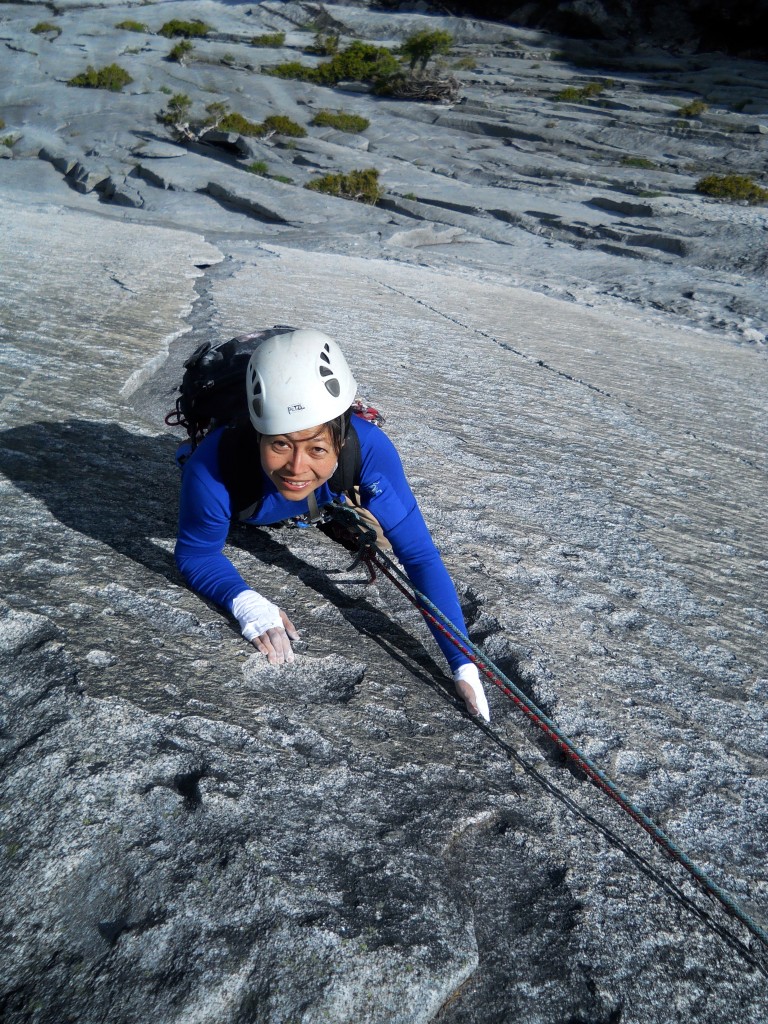 Shirley topping out on the BEAUTIFUL “Blue Crack”. Pitch 6 of Dreamer. The crack itself is probably no harder than 5.7; it’s only reaching the start of the crack that is 5.9 (July 2012). 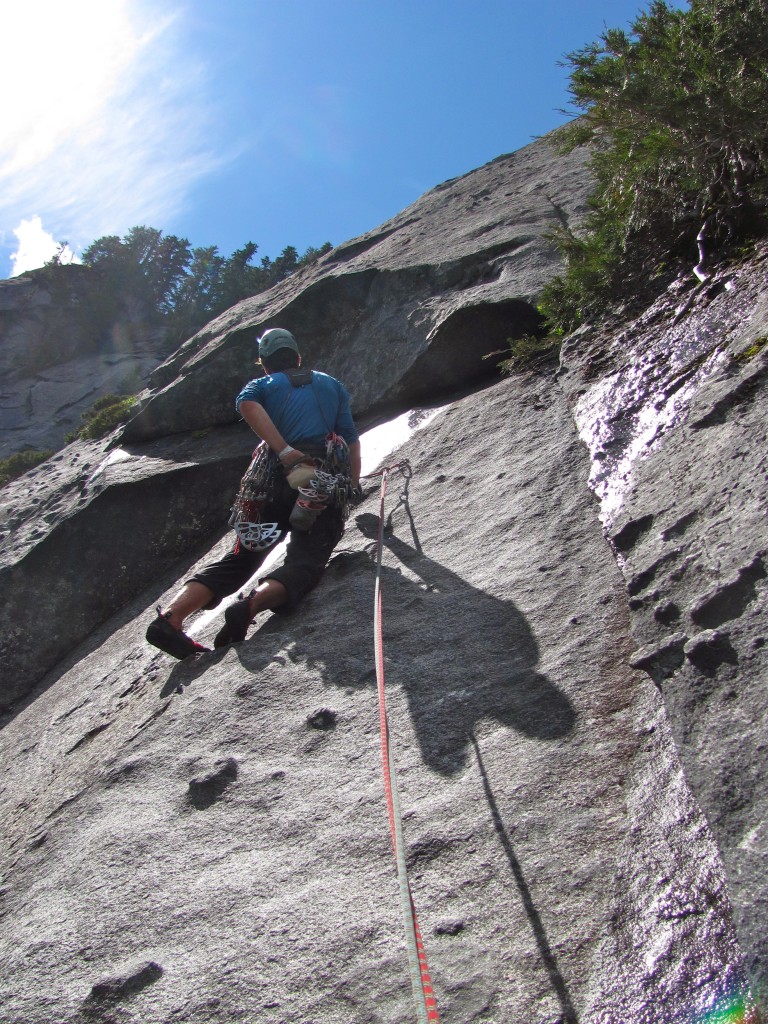 Starting the lead of pitch 7 of Dreamer. The start of the traverse was soaking wet & slimy and got crossed with a bit of tension (July 2012). 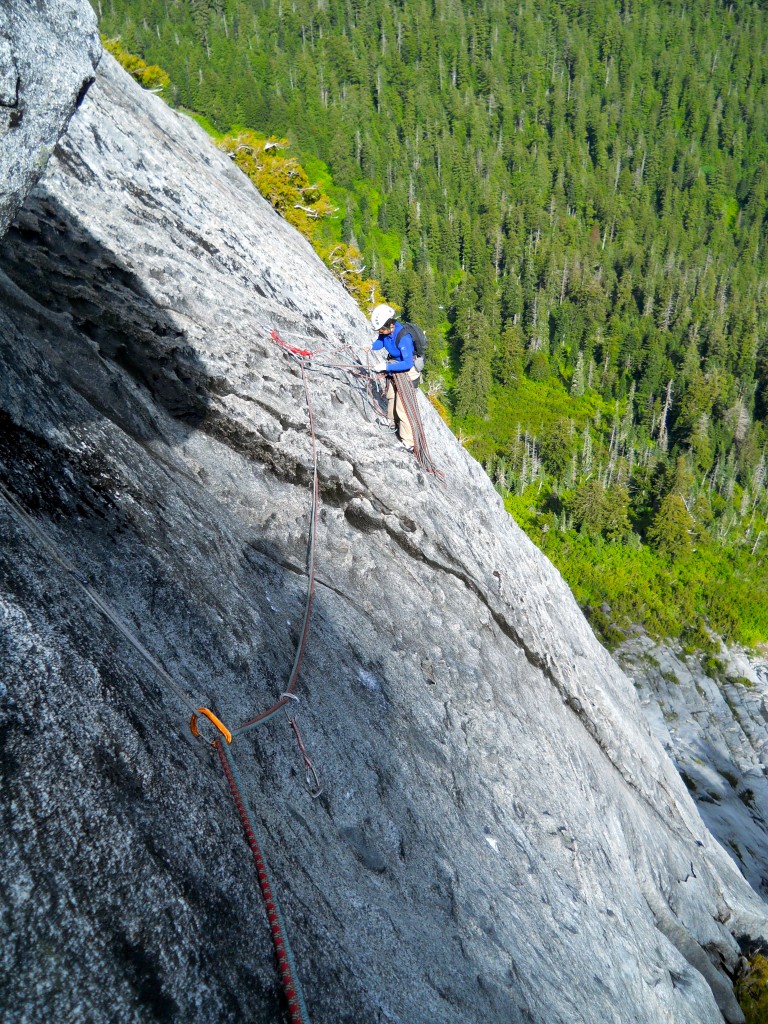 Looking back at Shirley from the start of the 8th pitch of Dreamer – a nice knob climbing affair (July 2012). 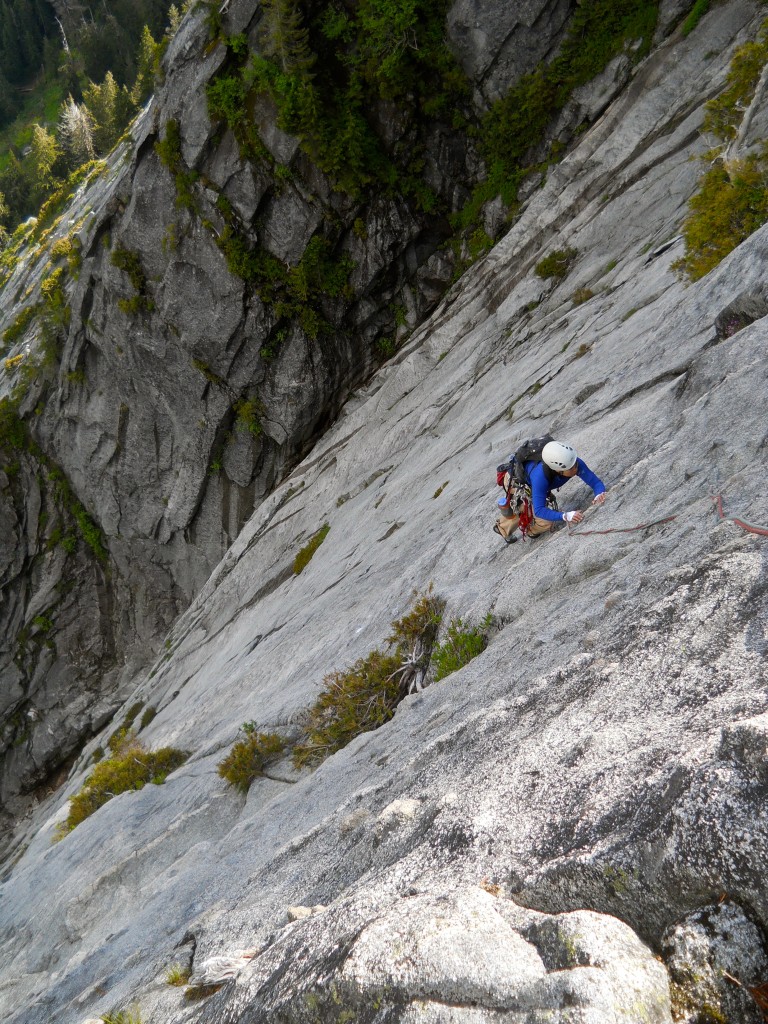 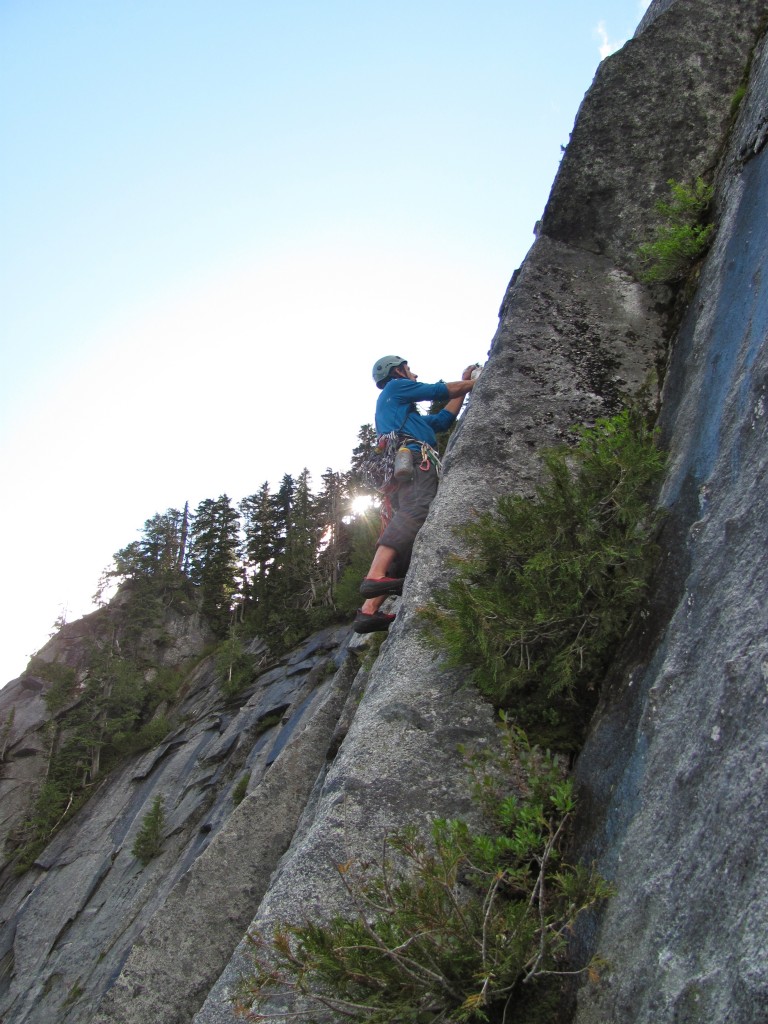 Leading the final (we did not do the low angle pitch at the very top…the unnumbered one on the topo) pitch of Dreamer. Steep but with big edges (July 2012). 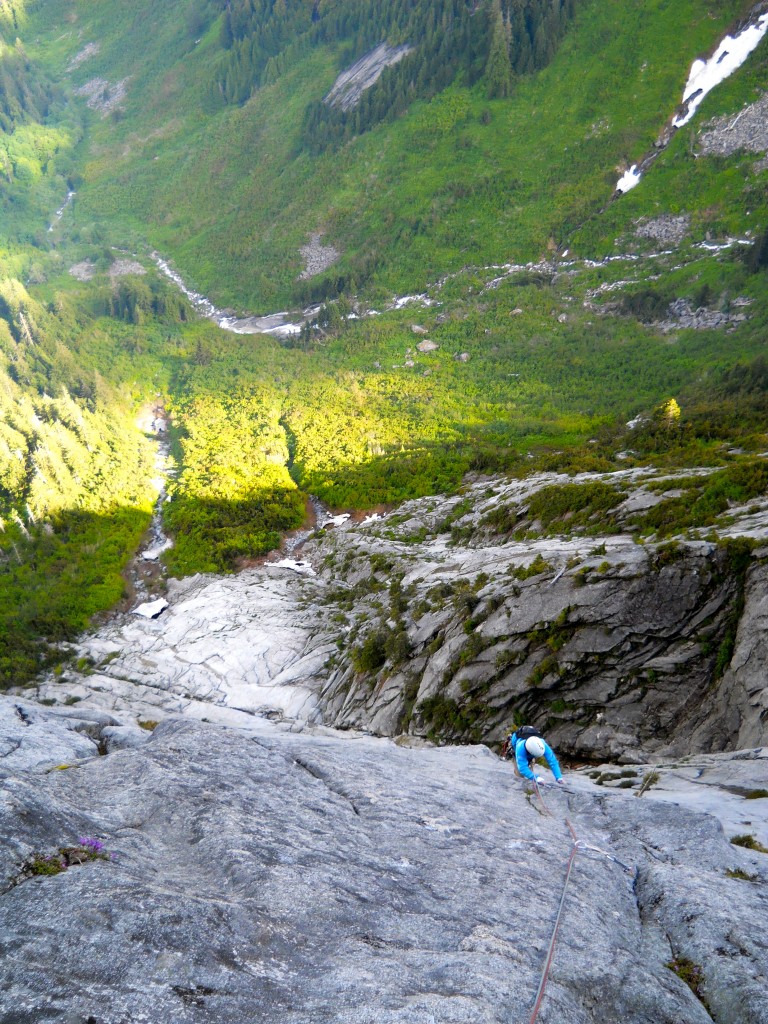 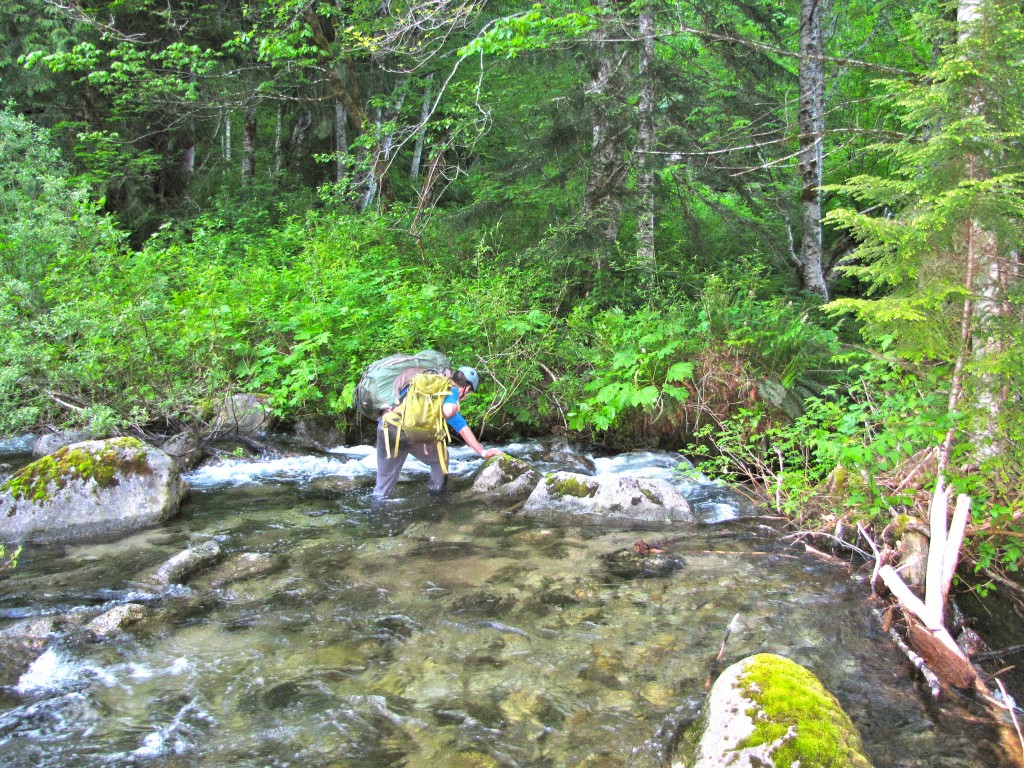 Hiking out after our climb of Dreamer. The river did not provide any dry foot crossing options (running higher than we’ve seen it before) and we were soaked anyway at this point (July 2012). 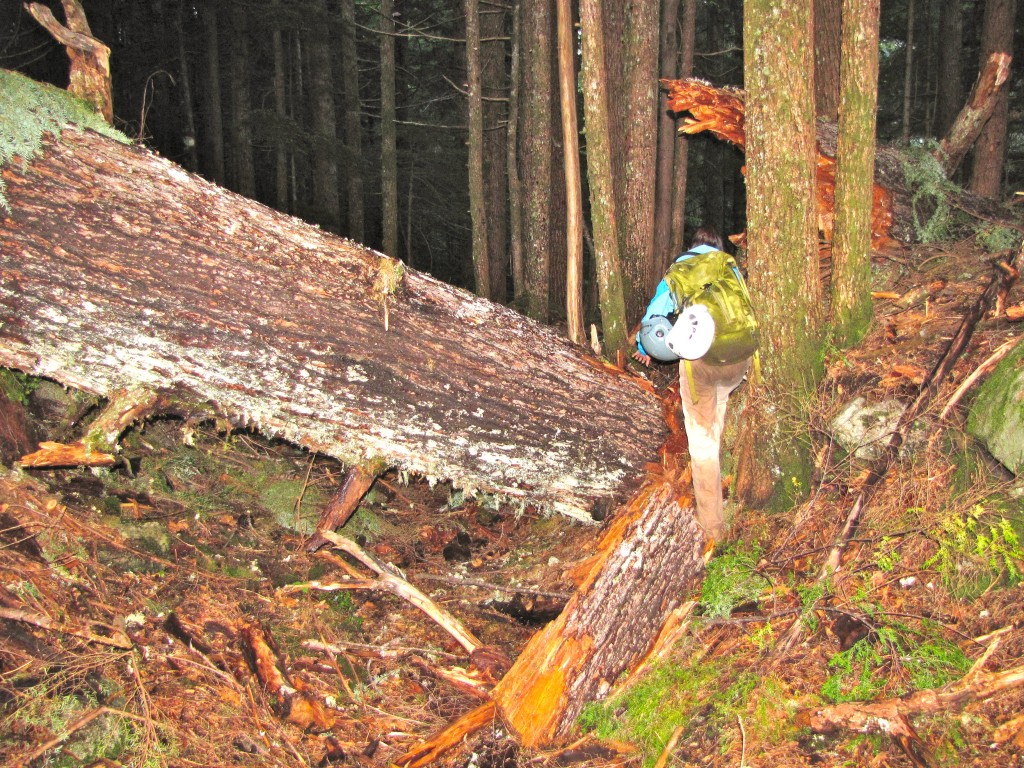 Hiking out from the Green Giant Buttress (July 2012).