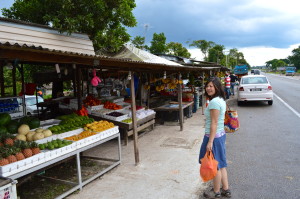 As forecasted, less than ideal weather greeted us in Malaysia: a mix of sun and sustained periods of torrential rains. Things seemed to improve slightly once we reached the town of Mersing on the South China Sea coast and by the time we were on Tioman the skies were clear. Tam, who is a climber (and a psychologist by training), runs the Simukut Hill View Resort along with Uncle Sam. Both have been heavily involved in helping to establish climbing routes on the Dragon Spires. Tam has climbed many of those routes including participating in first ascents. On our first evening, he suggested that we use the next day to get our gear to the base of the route, including filling water bottles in the jungle en route. We spent the afternoon checking out the nearby Mukut village including a nice waterfall, snorkeling the beautiful and accessible coral reefs, and enjoying some very good fresh seafood courtesy of Uncle Sam. There are countless mango trees (different varieties) growing in and around the village and the fruits were in season. This meant an unlimited supply of free mangos. In fact, if you wanted to go really low budget, you could survive eating nothing but mangos. We saw a lightning storm out at sea that night but the sky over the island remained clear. 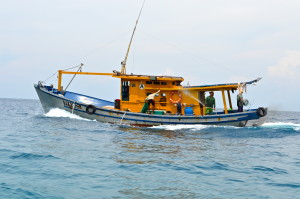 In the morning, we set off on the jungle trail in the direction of the spires. Heavily laden with gear, it took about 30 seconds for us to be totally soaked in sweat in the sauna-like environment. A hundred feet above the village I nearly stepped on a small snake. Knowing that the island is home to several varieties of cobras (including The King) and vipers, we were tickled pink with anticipation (scared shitless) as to what else we were going to encounter on the 90 minute hike. Halfway through the approach, there’s a marked water source at a stream which was unfortunately down to a trickle as there has been no rain on the island for some days though things were about to get remedied. It took us over an hour to collect enough water for the climb. Tam came along with us and graciously helped us in carrying the water to the base. Tam and Uncle Sam maintain a good trail (with regular doses of machete work) all the way to the base of Waking Dream route. We secured the gear near the base, hung out with Tam at a nice overlook point and eventually made our way back down to the village. That afternoon we met a couple from Kuala Lumpur: Bee Lee and Ian who were also staying at Tam’s. We enjoyed chatting with them and especially absorbing their food recommendations. We watched another lightning storm out at sea that night but once again nothing came close to the island. 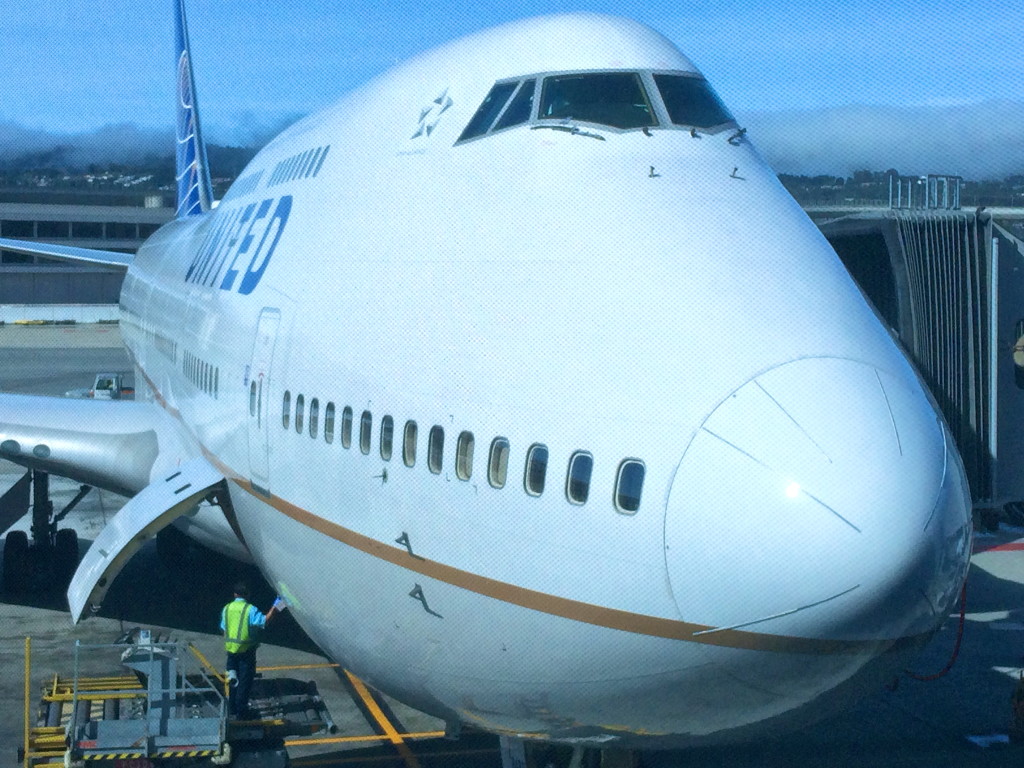 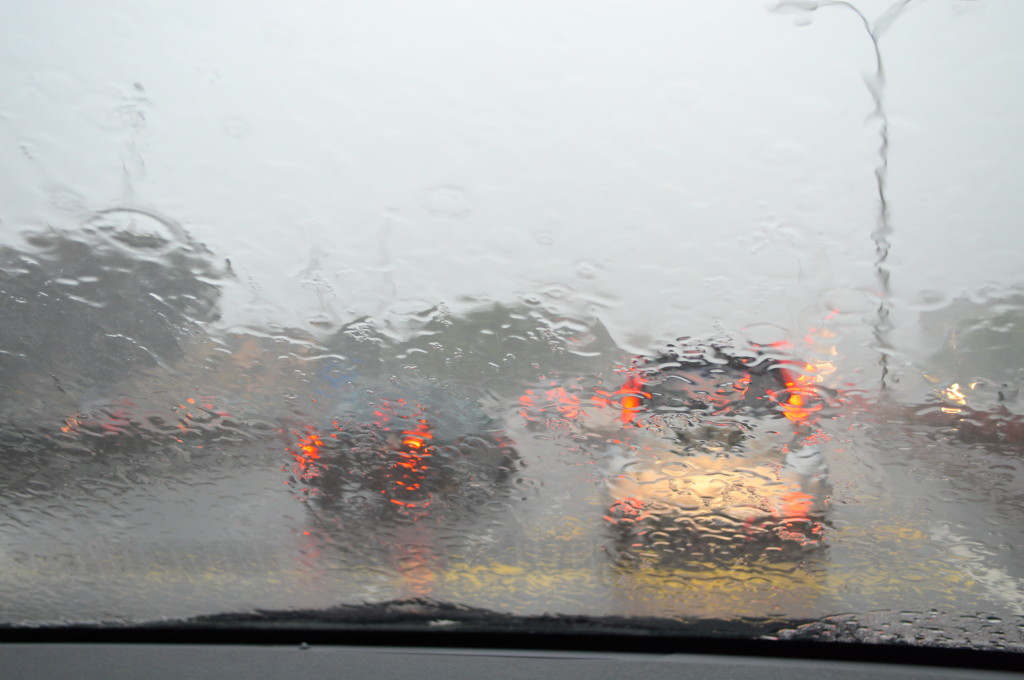 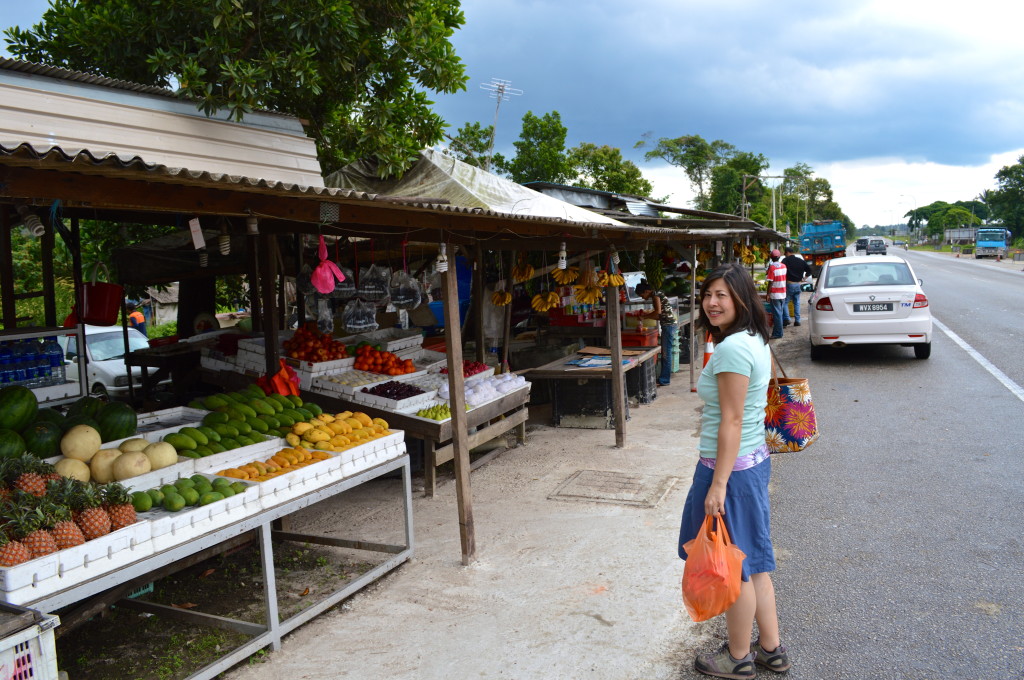 Roadside fruit vendors somewhere outside of Mersing (May 2014). 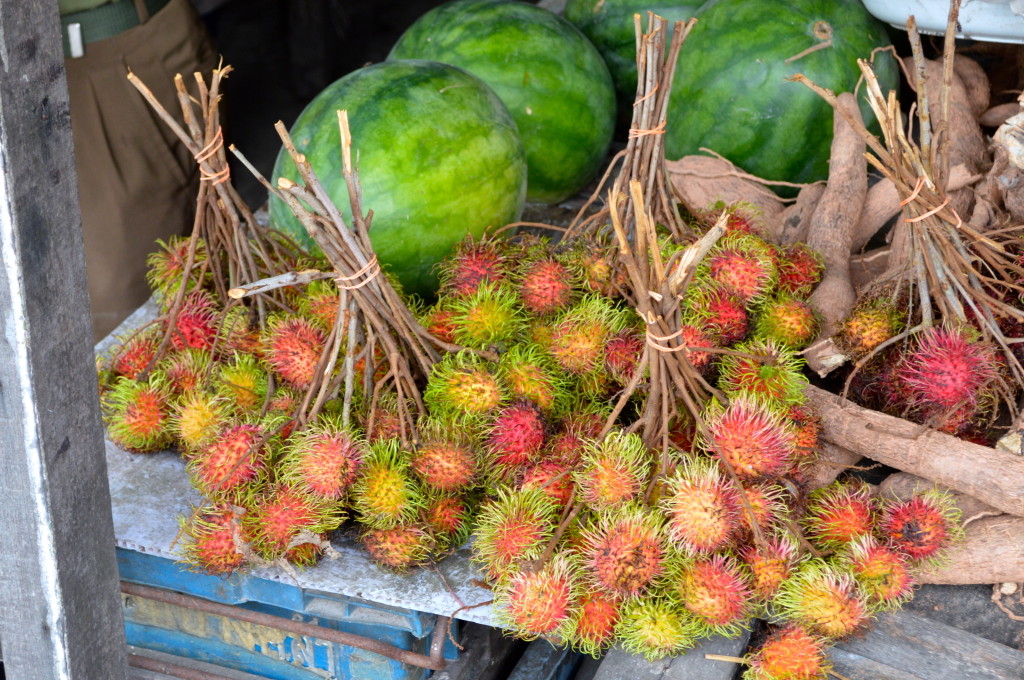 Some ripe rambutans at a roadside fruit stand during our drive from Johor Bahru to Mersing (May 2014). 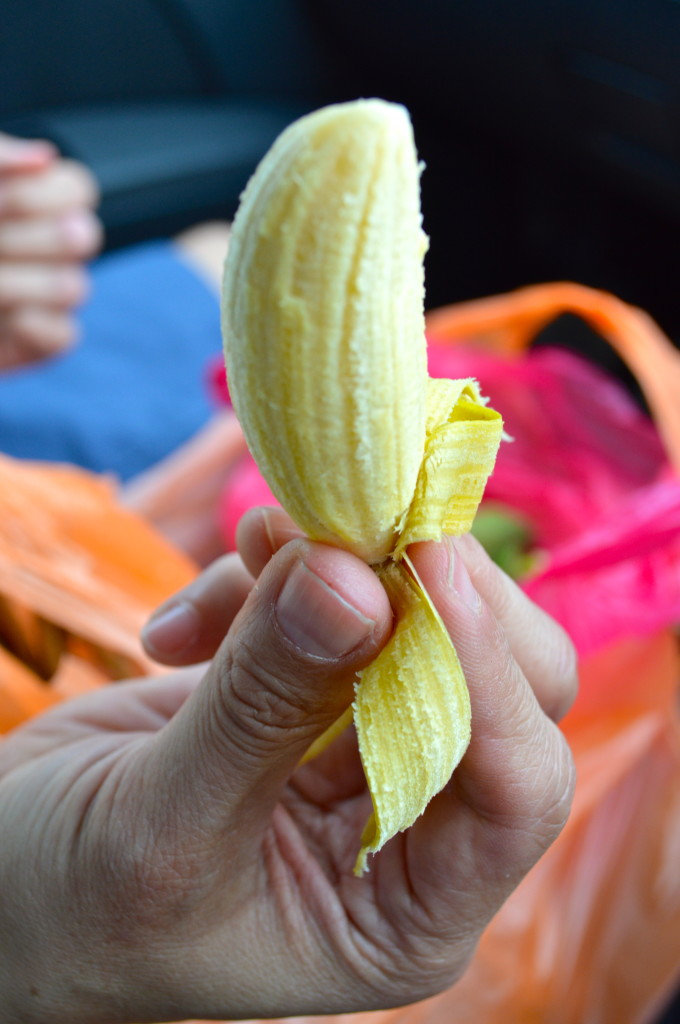 Bananas come in many forms – not just the single Safeway market variety as in US (May 2014). 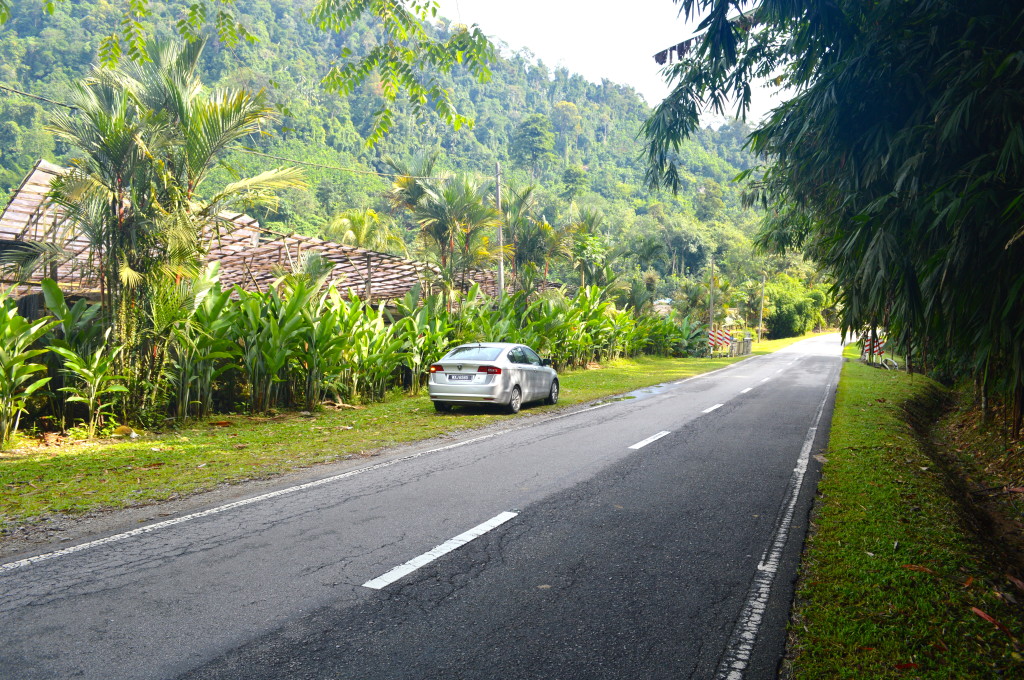 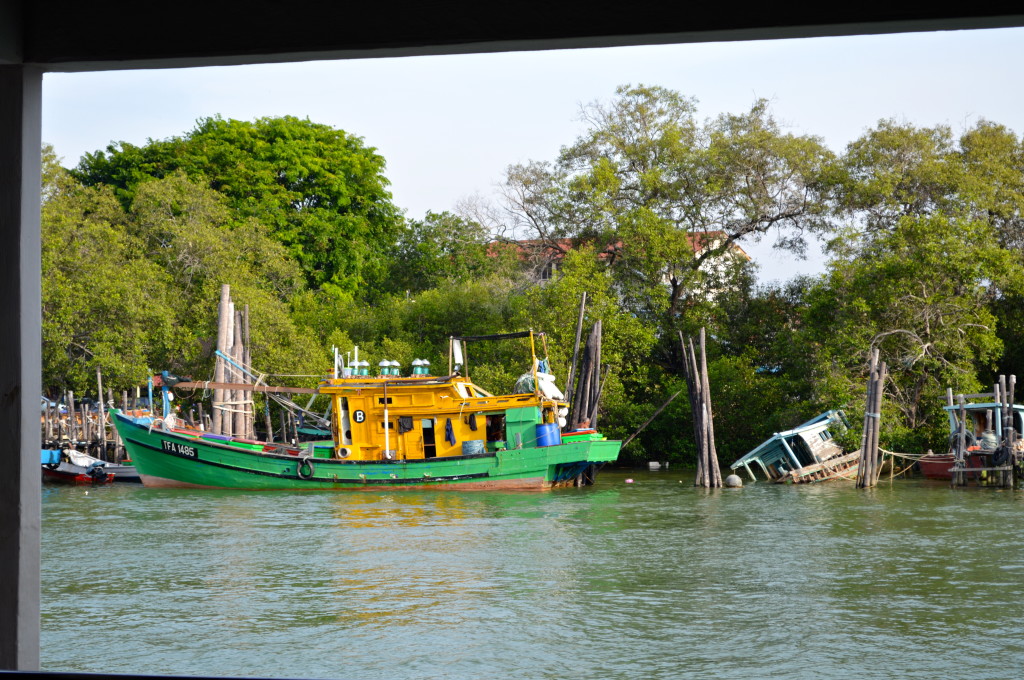 The Mersing marina – small town on the Malaysian mainland from which the ferries to Tioman depart (May 2014). 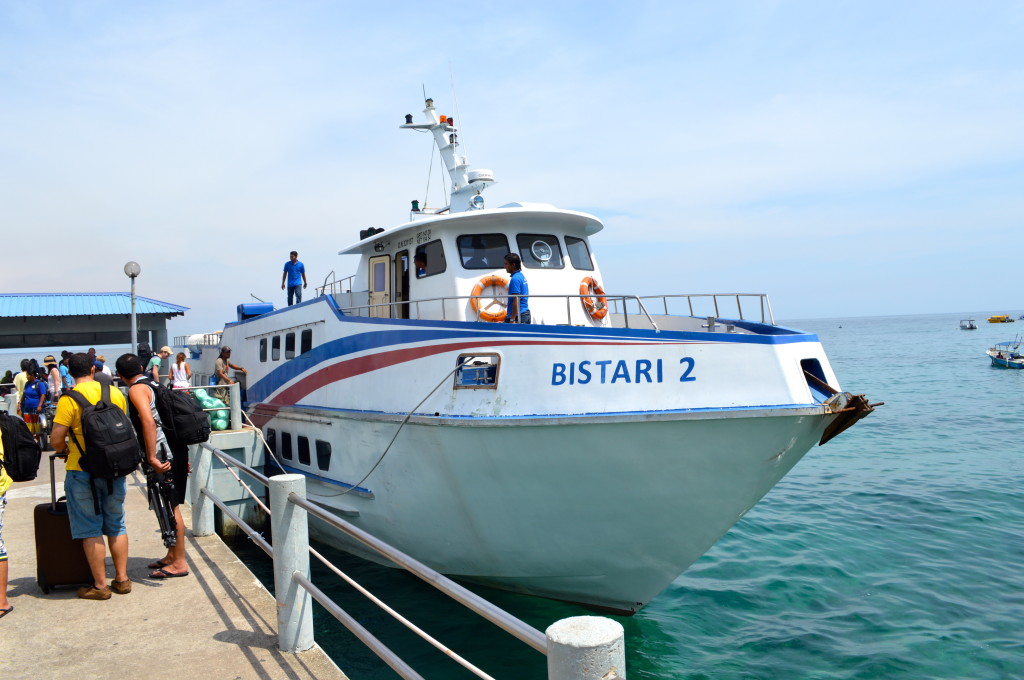 Our ferry arriving at the village of Genting on Pulau Tioman. From here it’s another 45-60 minutes ride in a small boat to the village of Mukut on the southern tip of the island (May 2014). 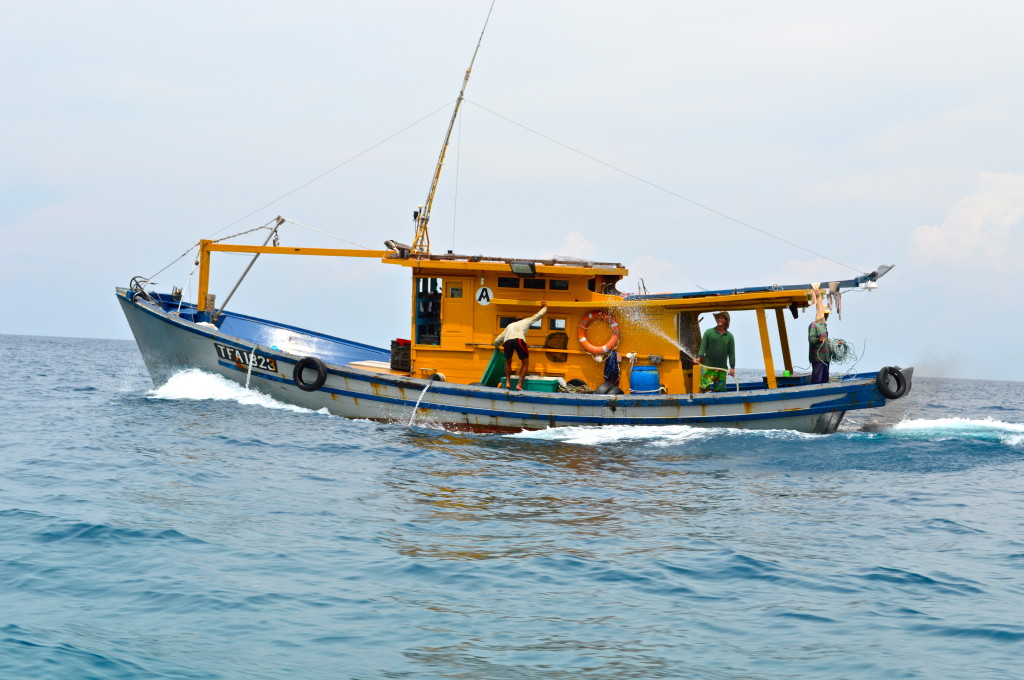 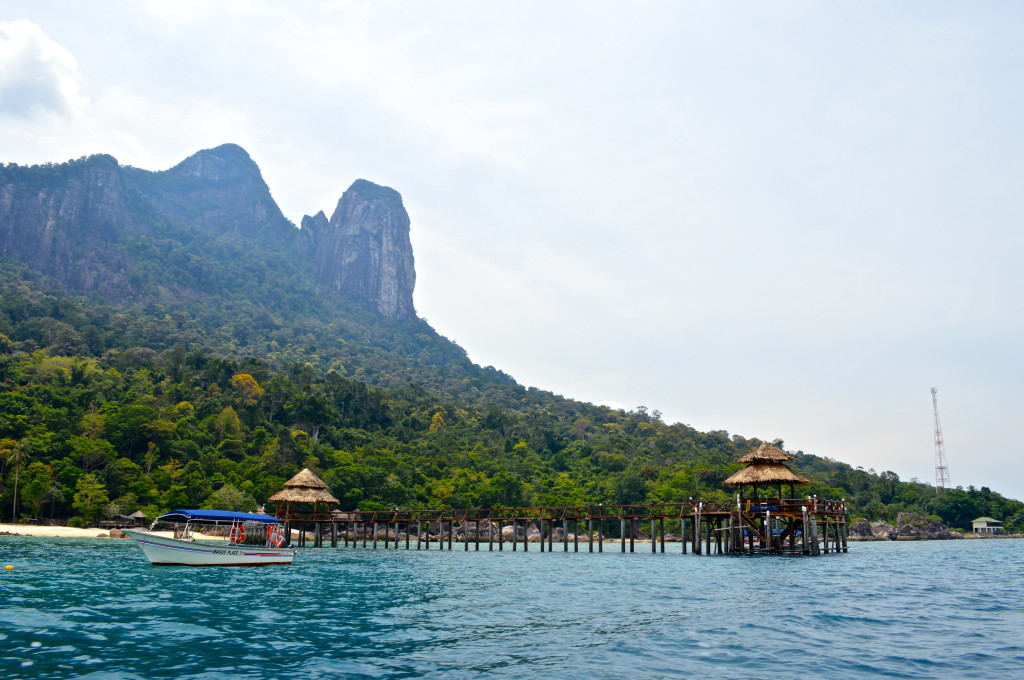 The first sighting of the Dragon Horns formation. The south one (with multiple established routes) is the more dramatic looking one on the right (May 2014). 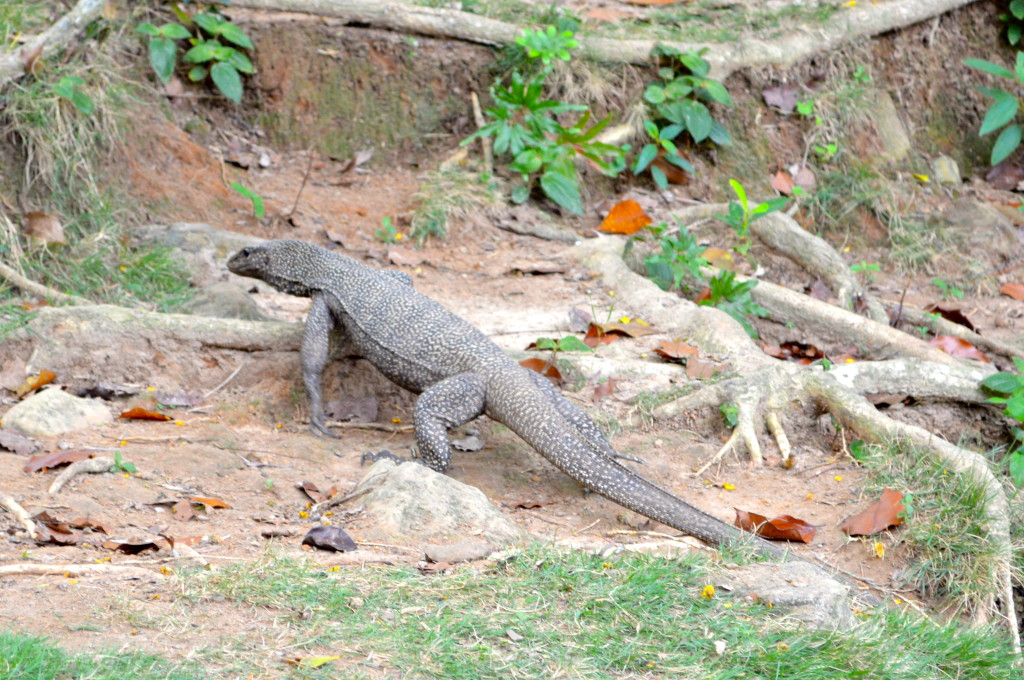 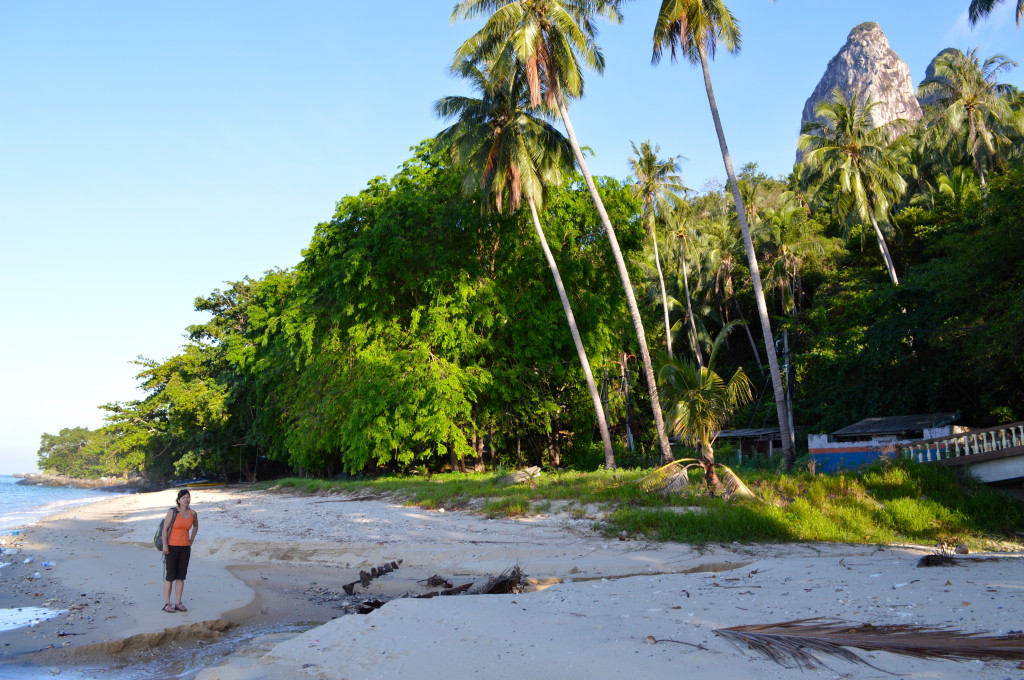 Walking the beach in Mukut with the South Horn showing (May 2014). 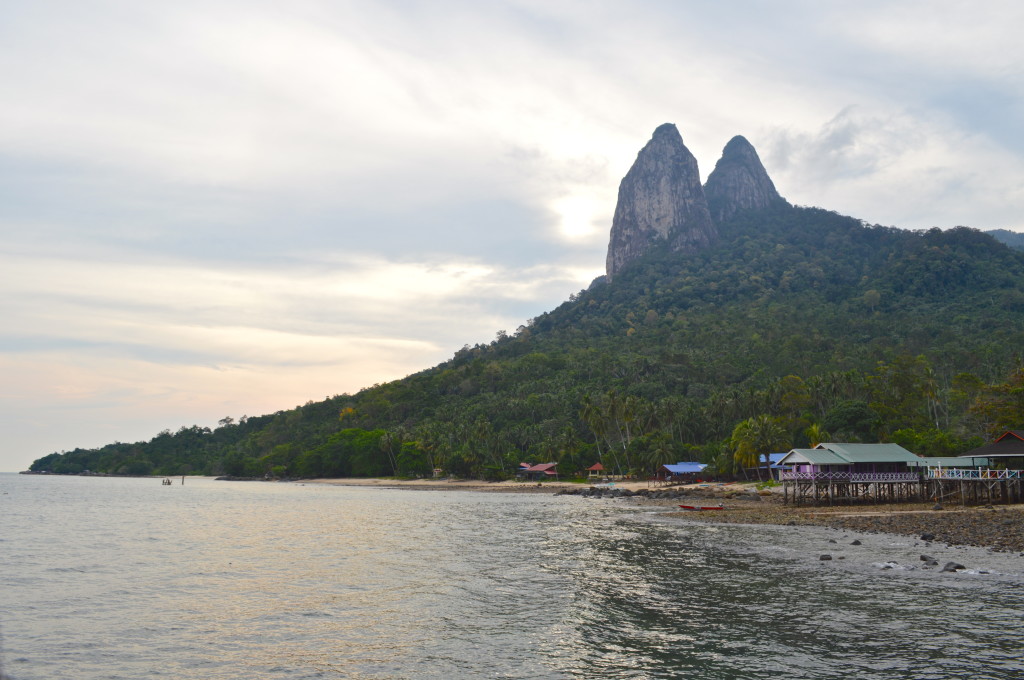 The view of the Dragon Horns from the jetty in Mukut (May 2014). 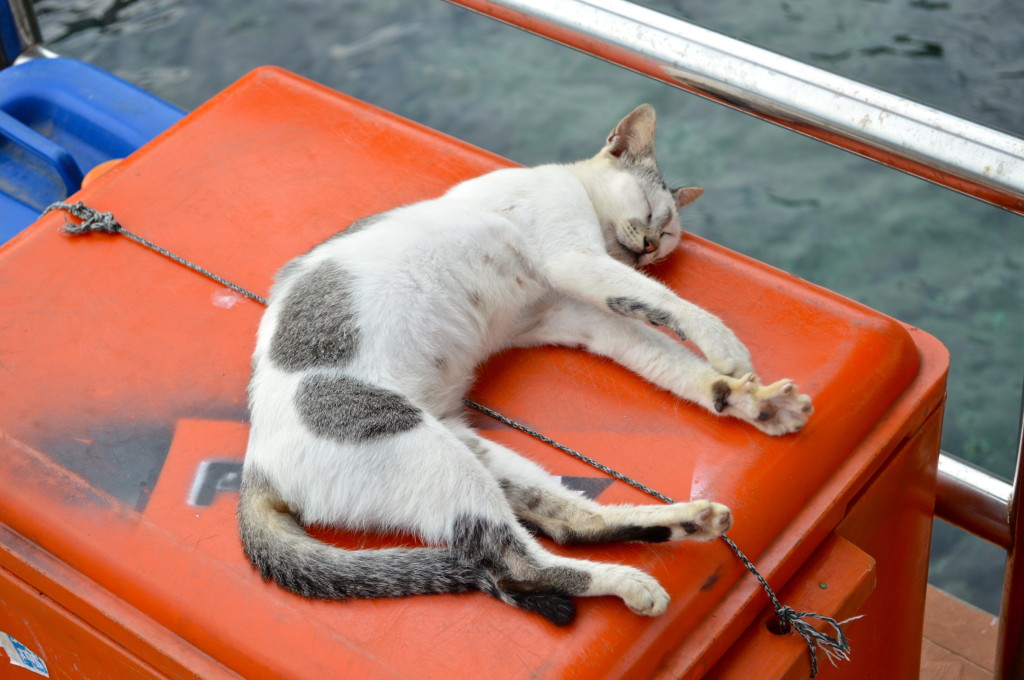 The village had numerous tigers as well – most were quite docile however (May 2014). 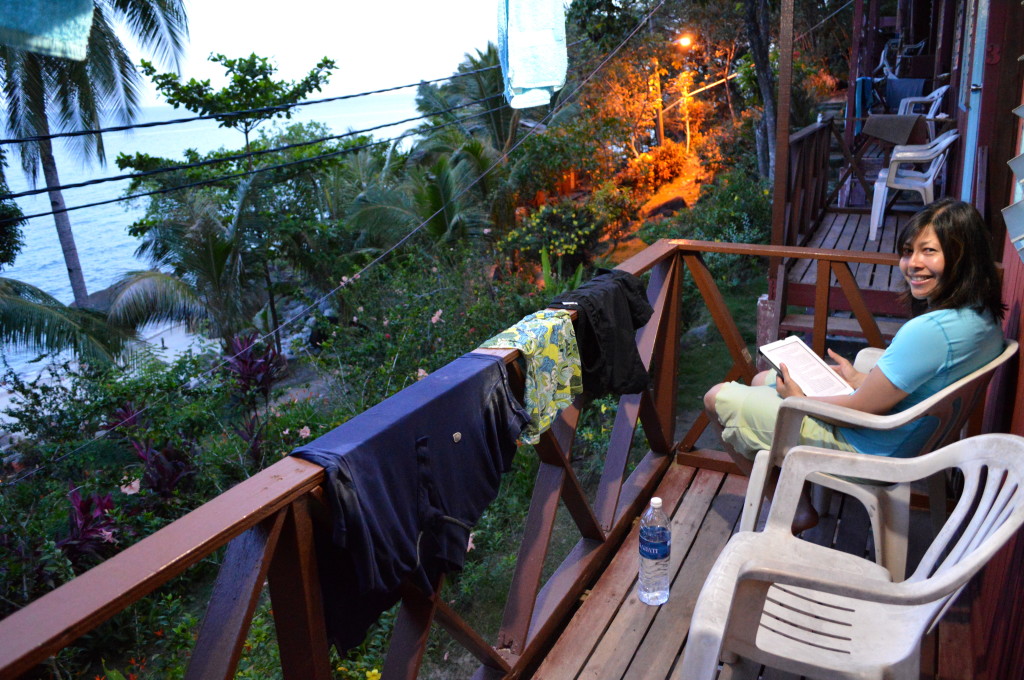 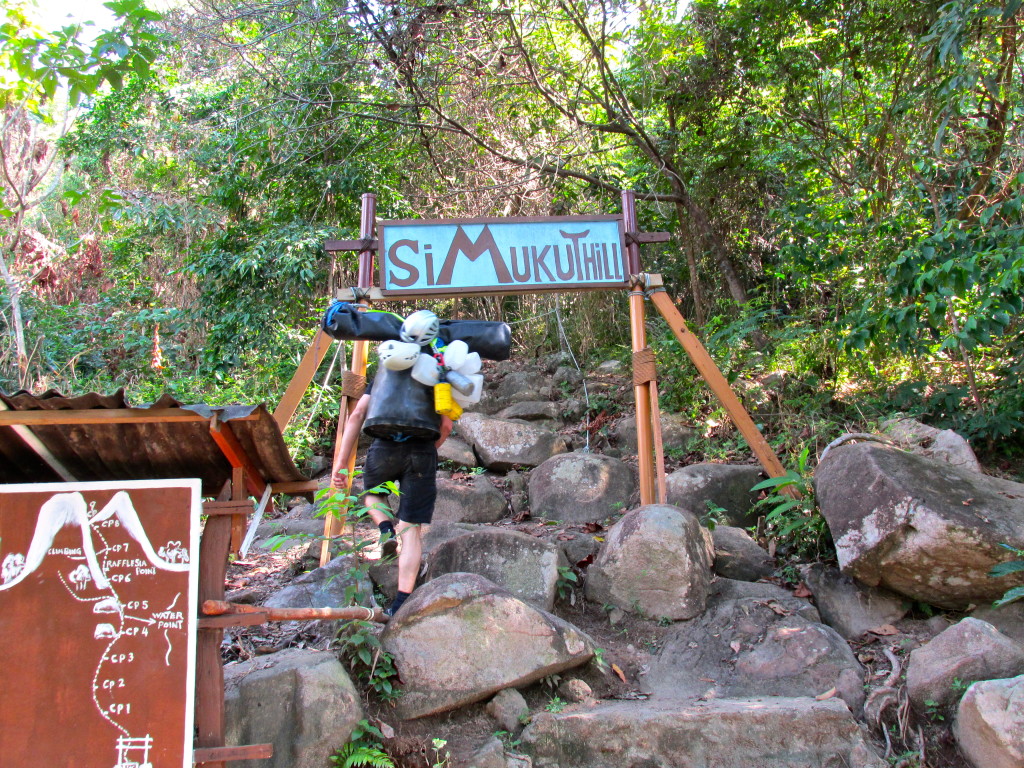 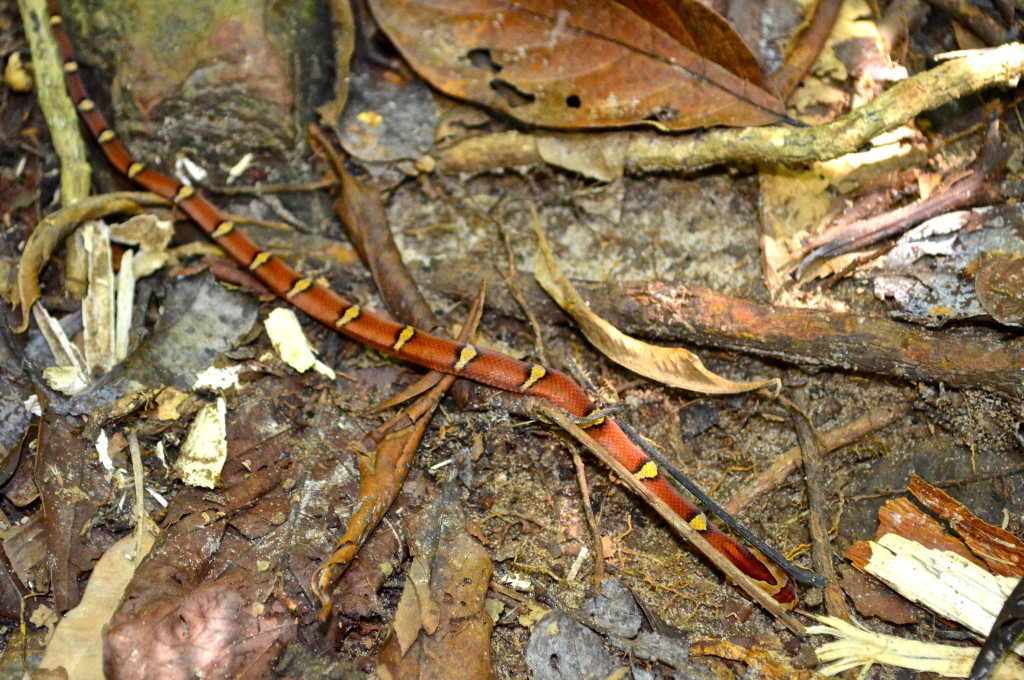 A small snake we encountered on the jungle hike just outside the village. I think it’s some sort of a kukri snake and Tam might’ve mentioned it being called a dagger. At this point our thoughts were that if we’re already seeing snakes less then 50 meters from the village, what else are we going to run into on the 90 minute hike to the base? 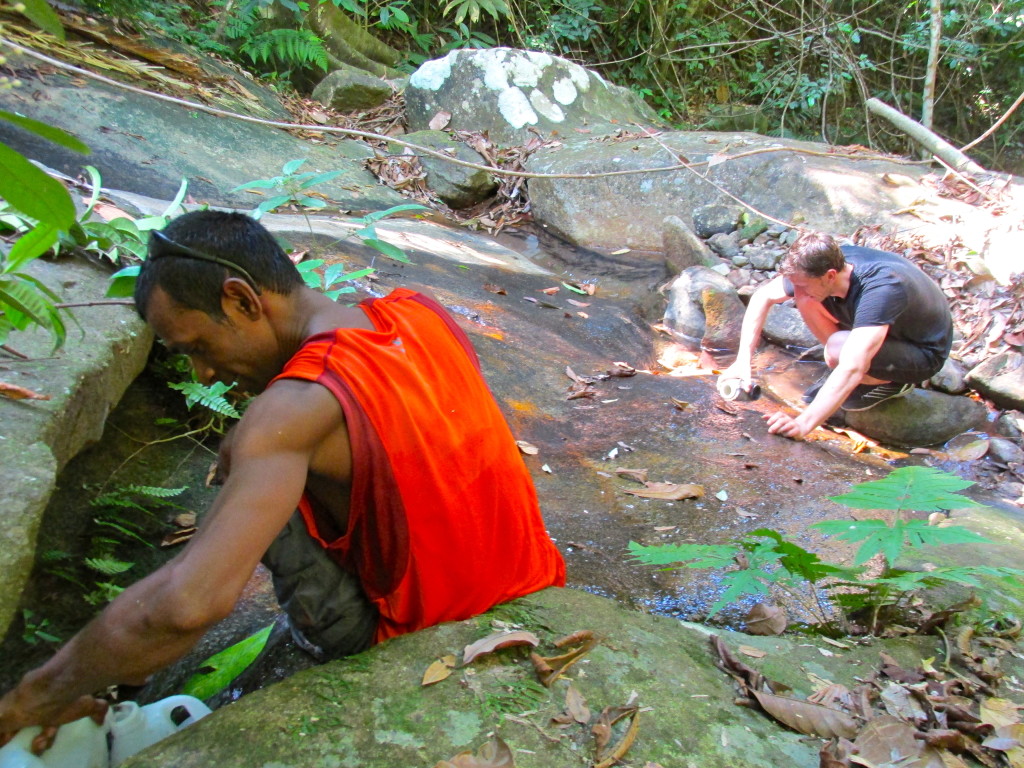 Working with Tam to fill our water bottles for the climb. Took a while. The jungle water source was not exactly running at high level (it would be soon enough…). 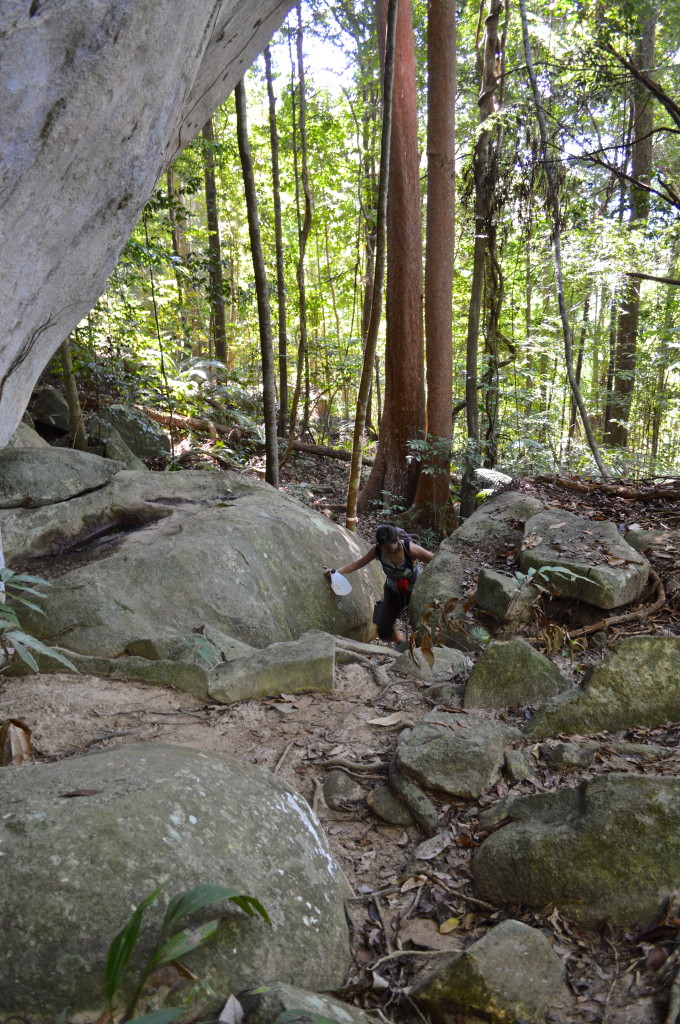 Shirley approaching CP5 (one of Tam & Uncle Sam’s marked checkpoints) on the jungle approach (May 2014). 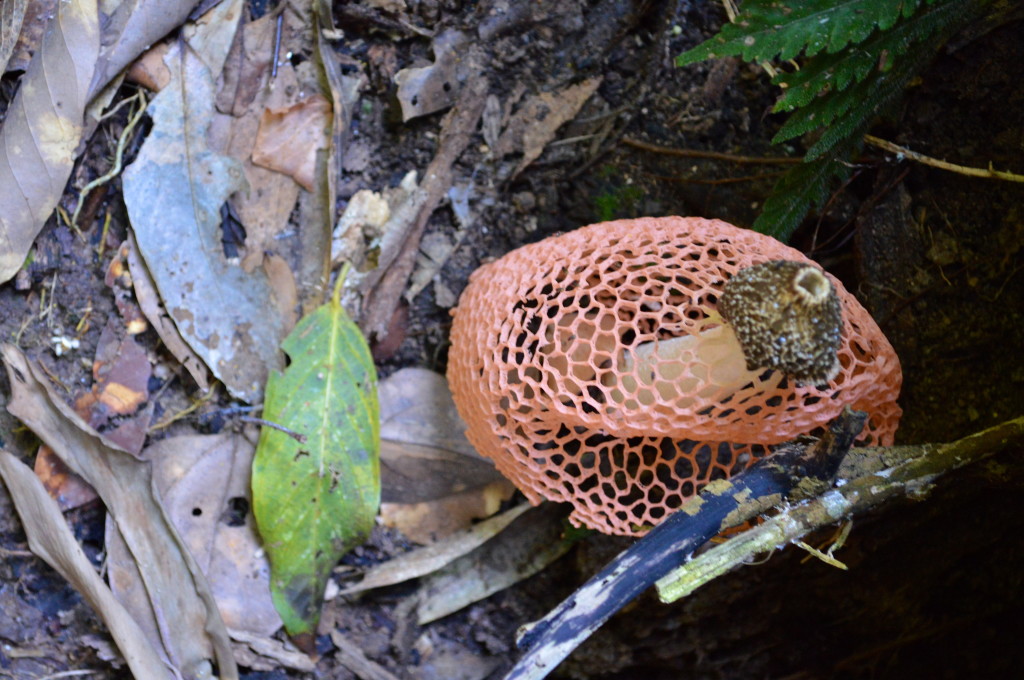 An interesting looking mushroom in the jungle (May 2014). 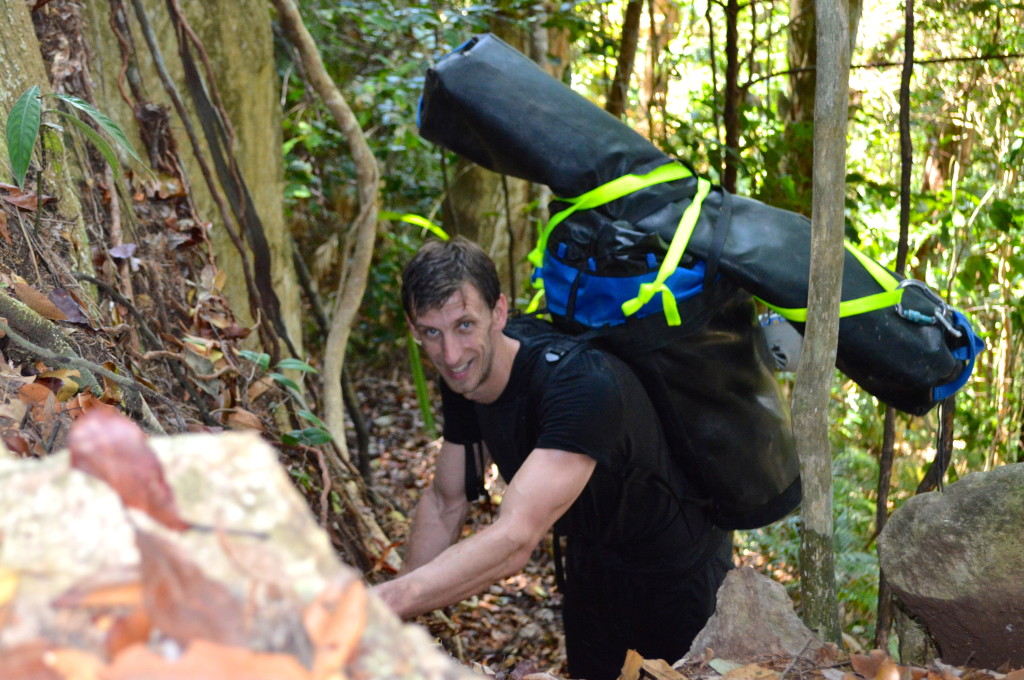 Nearing the base of Waking Dream on day one. The goal was to get all the gear and water to the base of the climb…some sweaty fun (May 2014). 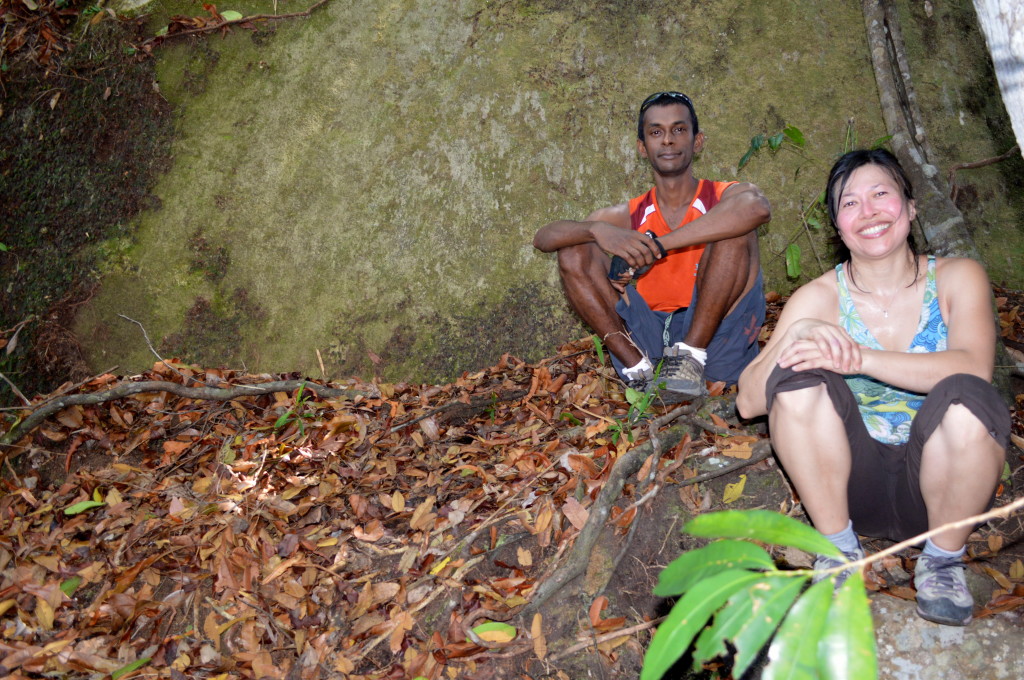 Shirley and Tam near the base of Waking Dream after dropping off our loads…well, that didn’t come out quite right but you get the gist (May 2014). 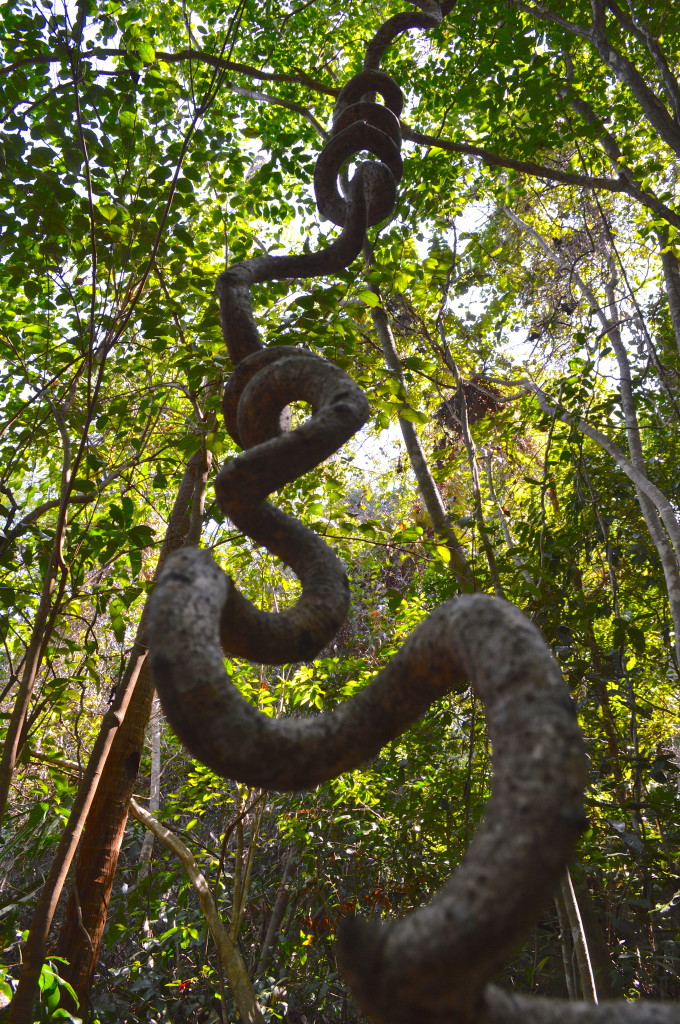