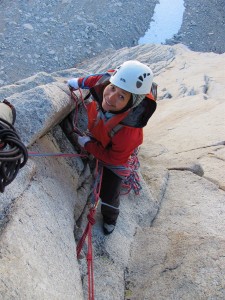 Shirley & I have made a few (unfortunately a small “few”) trips to the Sierras over the years – in fact, before I started looking at this, I always thought that somehow we’ve done more there! Oh well, an incentive to keep going back. We’ve made a handful of road trips down to The Valley, but most of the trips to the Sierras somehow involved flying down from Portland. Though we’ve flown into LAX, SFO, and Reno, the cheapest (usually by far) option and the one with best schedules is Sacramento (and it avoids the traffic horrors of the first two)…not to mention it’s got some of the most ghetto Motel 6’s you can find (i.e. cheapest for that post climb/pre work clean-up & sleep). The goal of this page is to organize our material (largely photos) from those trips. Guess for now, I’ll include the Tuolumne stuff here as well – otherwise, it’ll be pretty damn thin. 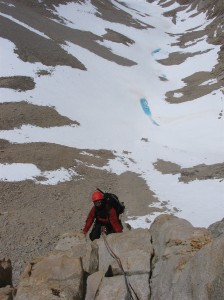 Shirley topping out on P2 of Fishhook Arete of Mt. Russell. 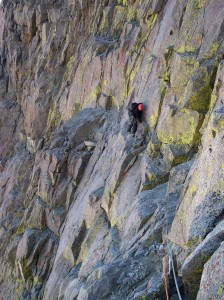