Go back to Australia.
Go back to Southern Hemisphere Sampler. 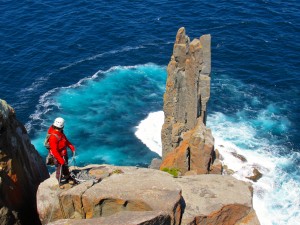 Has it really been seven years already? Older of course; wiser…perhaps not; but most certainly with a bigger appetite for international climbing. Another sabbatical was upon us…ticking away my career in seven year increments. Fuck it, let’s go climbing.

We’ve had a rough idea of what we wanted to do this time around for about a year. To that end vaccinations were done, visas were procured, tickets were purchased and ground transport was organized. We were ready. Then a month before departure a certain infectious disease struck and we found ourselves scrambling to find a suitable “plan B” (which would not require a three week quarantine upon return). Tasmania quickly came to the forefront largely based on the nicely done Select Climbs guidebook and the fact that December-January was more or less the optimal weather season. Though most climbing did not look huge it certainly looked interesting: a combination of sea stacks and multi pitch climbs (incl. splitter crack). 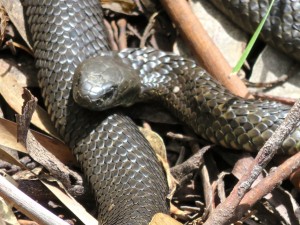 Our initial plan was to just wing it with a combination of camping and an occasional motel room. However, a last minute check of the forecast showed an on-off pattern of sogginess and so instead we reserved a cabin outside of Hobart which would serve as our base camp. A very good decision for multiple reasons. It turned out that the cabin was more of a very comfy house (the only bargain of the trip) and our hosts were a friendly Australian family with whom we quickly clicked and would share many dinners and “barbies” with. Much like us, Garry loved red wine and Jutta put up with my drunken quoting of Chopper Read. We’d watch Australian horror movies (Wolf Creek was great) together and learn how to properly enjoy Vegemite. We miss those guys already! 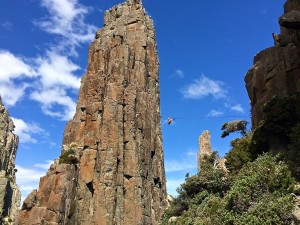 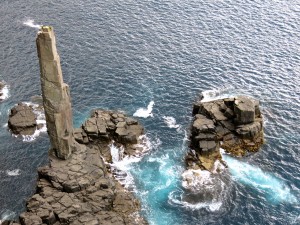