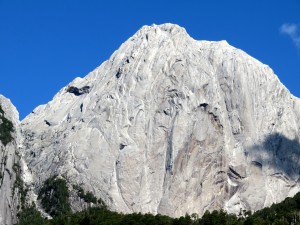 At base of Trinidad, you can crawl into your sleeping bag, stare at the wall as you try to sleep…the enormous wall can be intimidating and may not let you sleep. Its only a few hours until you have to wake up in the dark to be able to reach the peak in one day. I don’t want to mention storms if you plan to sleep in the bivy ledges … Enough reading about this route. Get some sleep and sweet dreams. 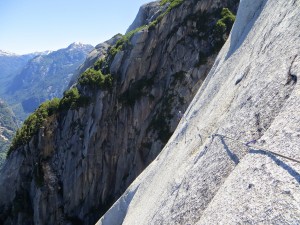 We were under way and scrambling up the 150 meters of 3rd class slabs by about 6am. Thanks to some helpful passer-by climbers who pointed out the route’s start the previous day, we had no shenanigans finding the start of the climbing proper. The first three pitches (.6, .7, .9) were mostly straightforward and went by quickly. The fourth pitch was the first difficult one of the route rated 5.10d to 5.11 depending on your choice of topo. Still it was well protected and consisted mostly of secure groveling up a steepening groove. Pitch five was a quick ledge traverse to gain an adjacent crack system. Actually, pitch six was a 5.10 groove (not crack) followed by some bolted 5.10+ face climbing – a good warm up for things to come very soon. We were moving along and making decent time. Pitch seven was a welcome respite from hard climbing and a rest right before what we thought was the crux of the route (by far!): a 35 meter traverse pitch (#8) consisting mostly of slab climbing. Strenuous start, hard but doable middle, and a desperate move past the last bolt (A0). This is of course full value for both the leader and the follower. 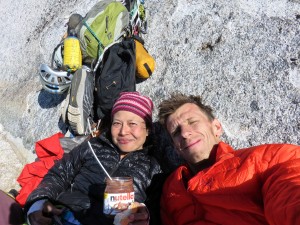 Did I mention the tabanos? The little fuckers seemed to intensify their dive bombing campaign right at the thinnest of slab moves. The crux took quite a bit out of us and the following pitch – more delicate granite face climbing – felt hard (10c). Pitch ten was a 60 meter dihedral (10b) ending with some lieback moves. We were getting tired. Most of the pitches felt quite long – the advertised 950 meters of climbing means the 20 pitches average 48 meters in length. Pitch eleven and more (10c) liebacking. I tried jamming a flared groove and took a 15 foot winger. Delicate stemming solved the issue on the second go. We took a quick rest at the start of pitch twelve. It was about 4pm and though we had plenty of daylight left, we felt pretty tired. Also, if you bring some bivy gear…you know how it goes. We climbed up to the bivy ledges 2/3rds of the way into pitch 13 and decided to spend the night. We had a full nalgene bottle, remnants of nutella in a jar and two stale bagels. We had lots of daylight, 7 pitches of climbing left and an uncertain descent. We watched the sunset over Cochamo Valley and eventually faded out to sleep. Though the night was windy, we had sufficient shelter to be comfy and actually got a decent amount of sleep. 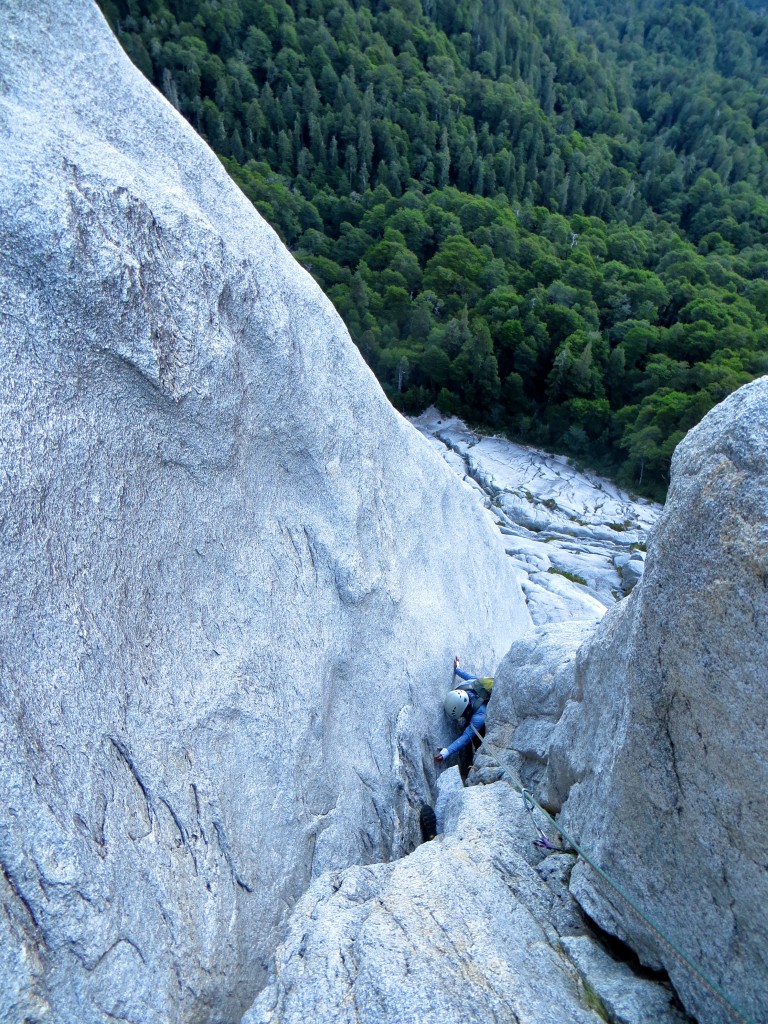 Shirley pulling out of the squeeze chimney on pitch 2 of Bienvenidos a mi Insomnio (better than the crack system to its left I thought; Jan. 2015). 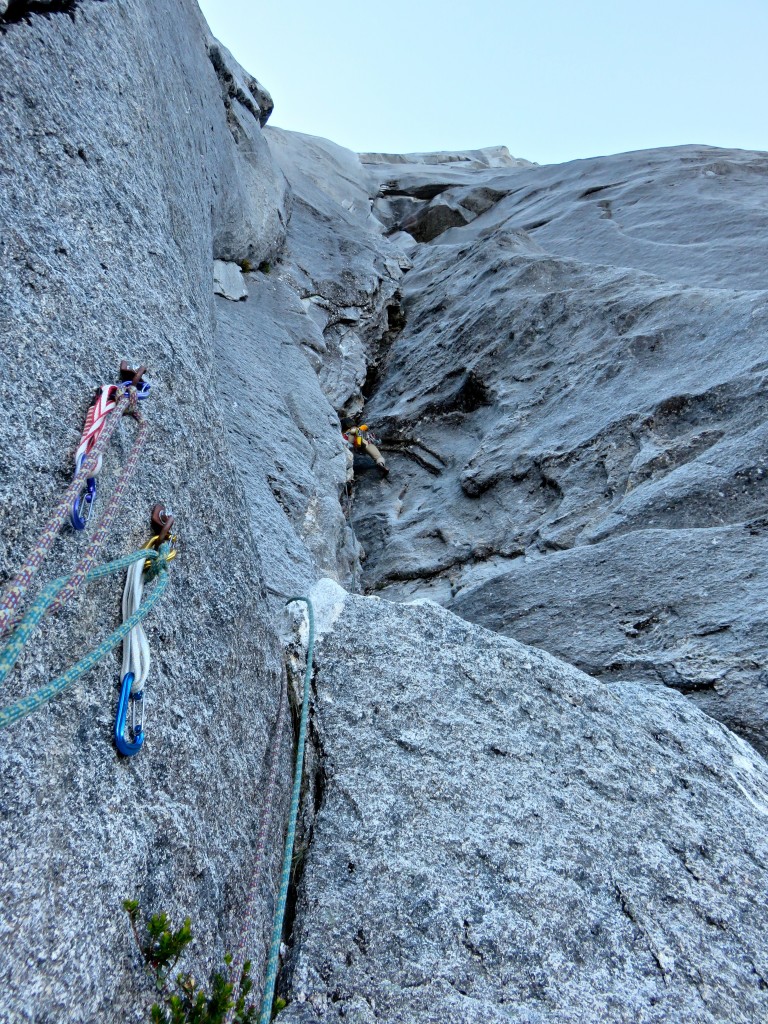 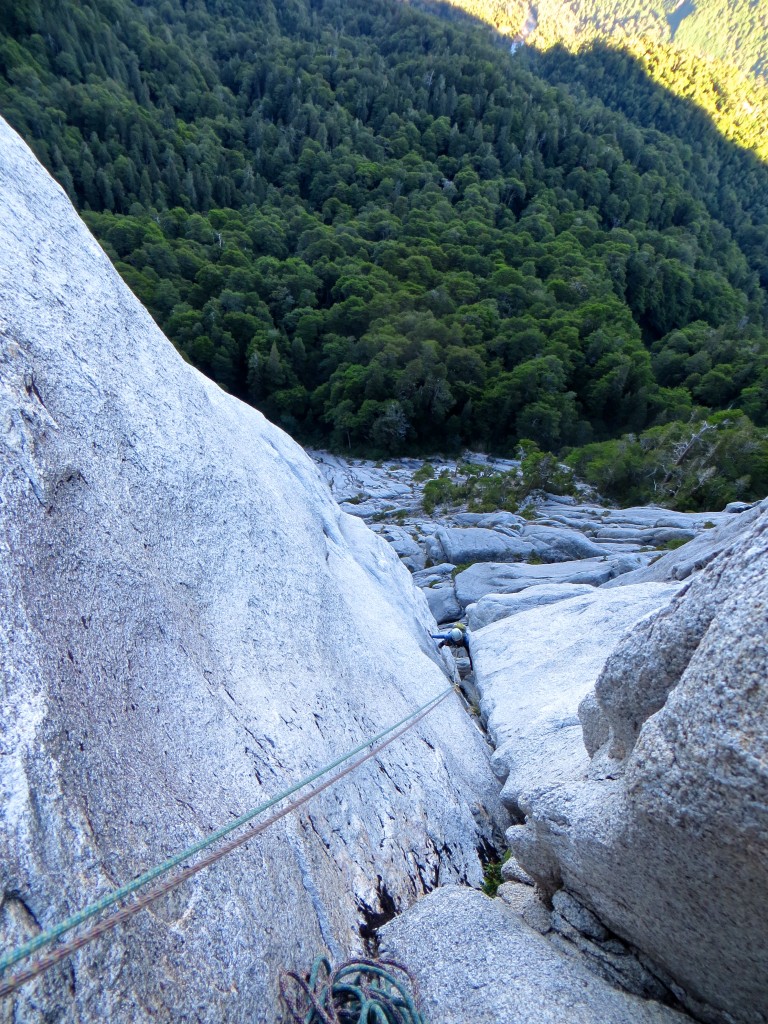 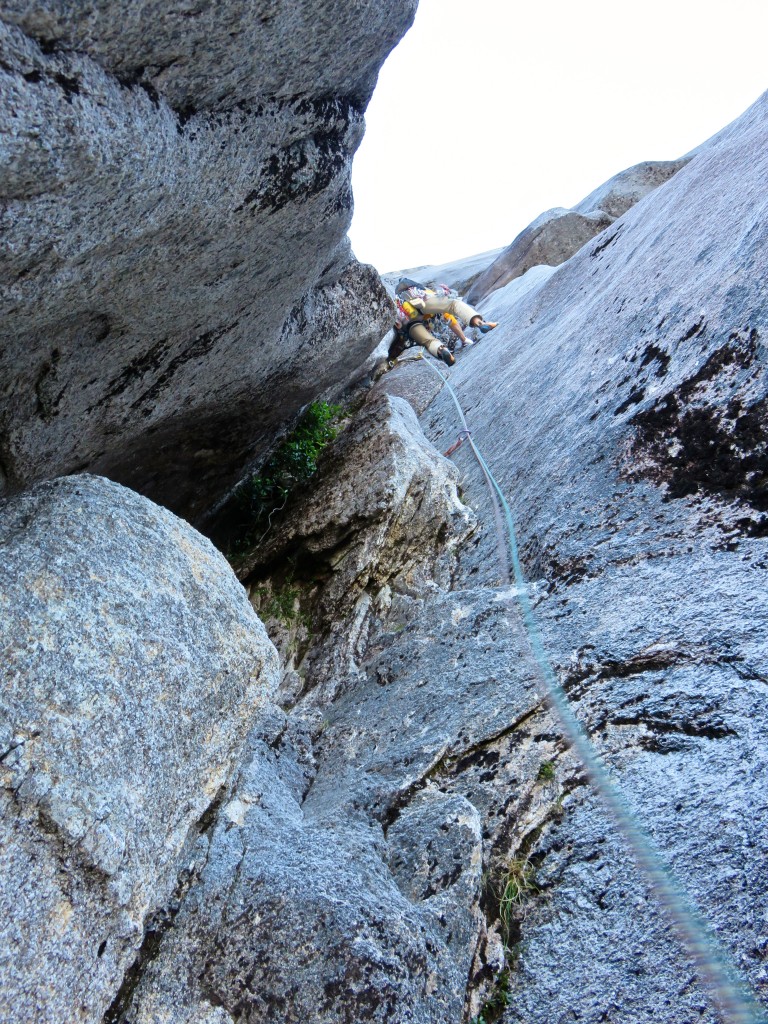 Leading pitch 4 – the first of the hard climbing on the route (but I thought the so called 5.7 squeeze on pitch 2 was not that easy either; Jan. 2015). 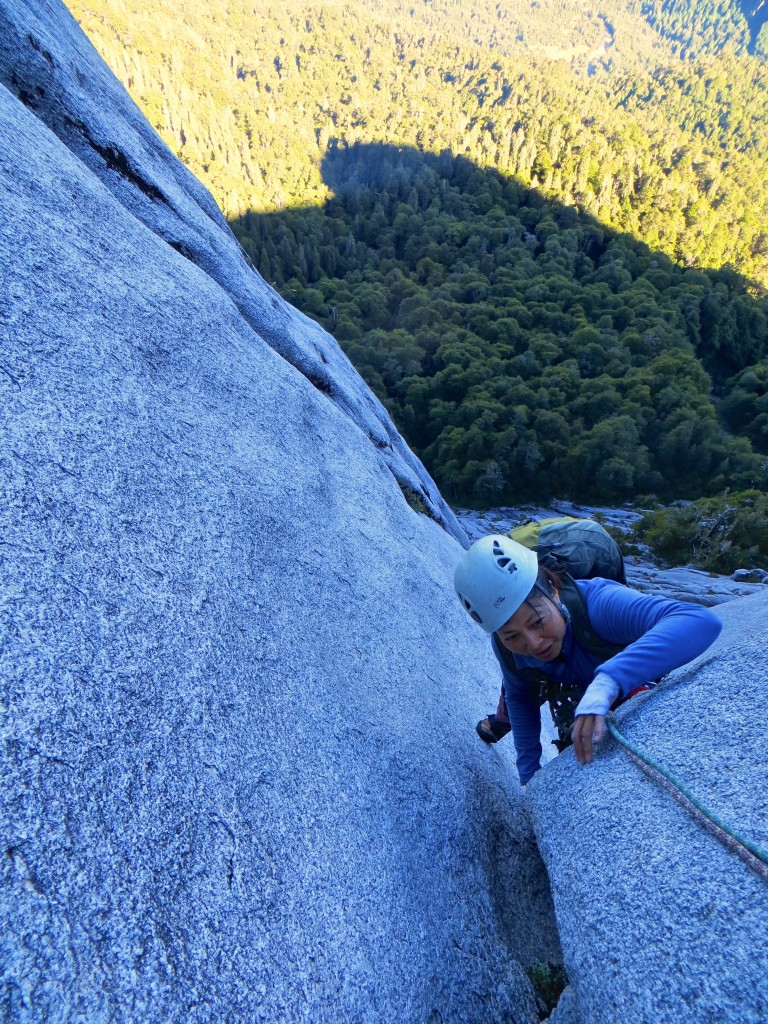 Shirley exiting the groove that is pitch 4 of Bienvenidos a mi Insomnio – first hard pitch of the route (Jan. 2015). 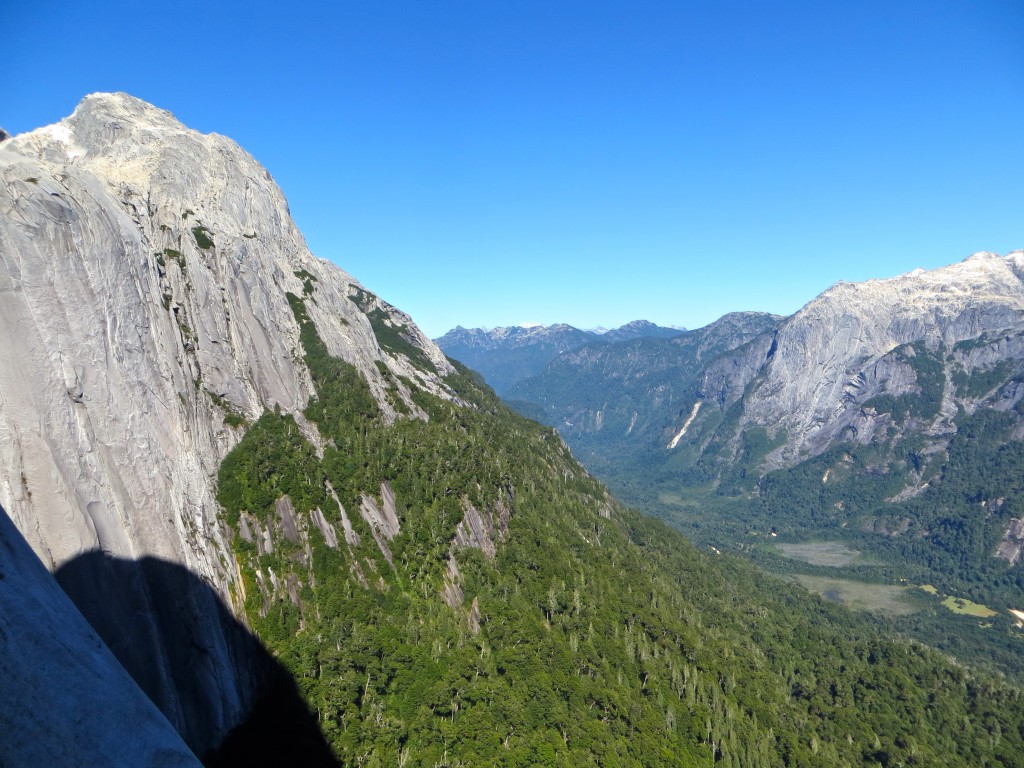 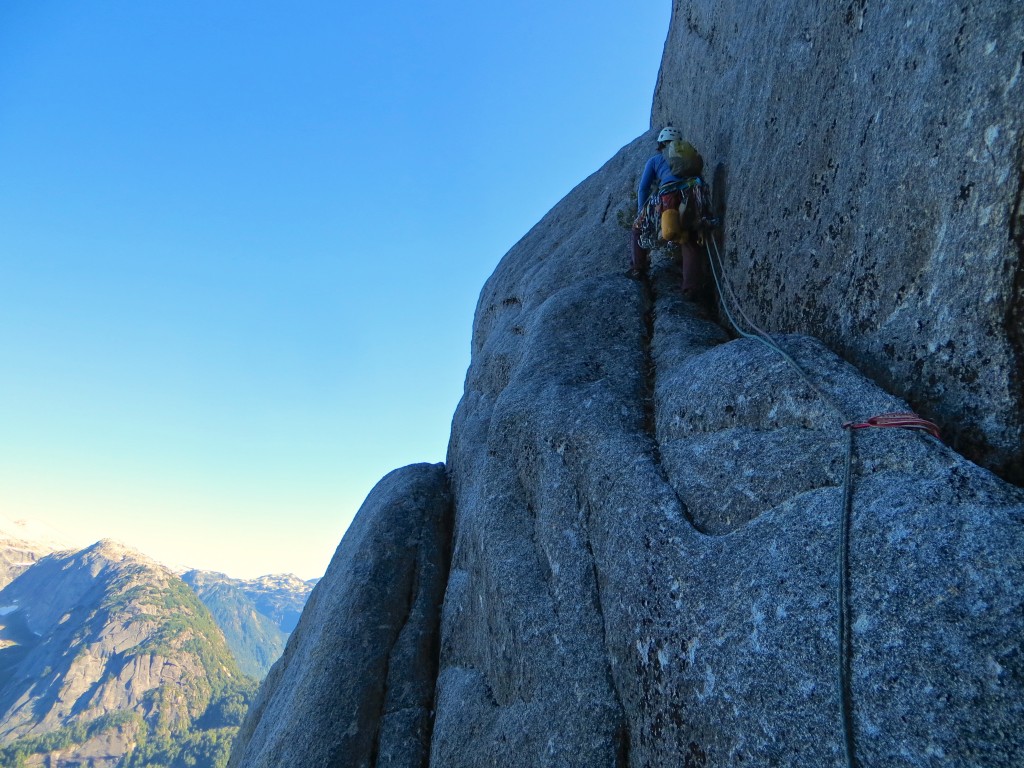 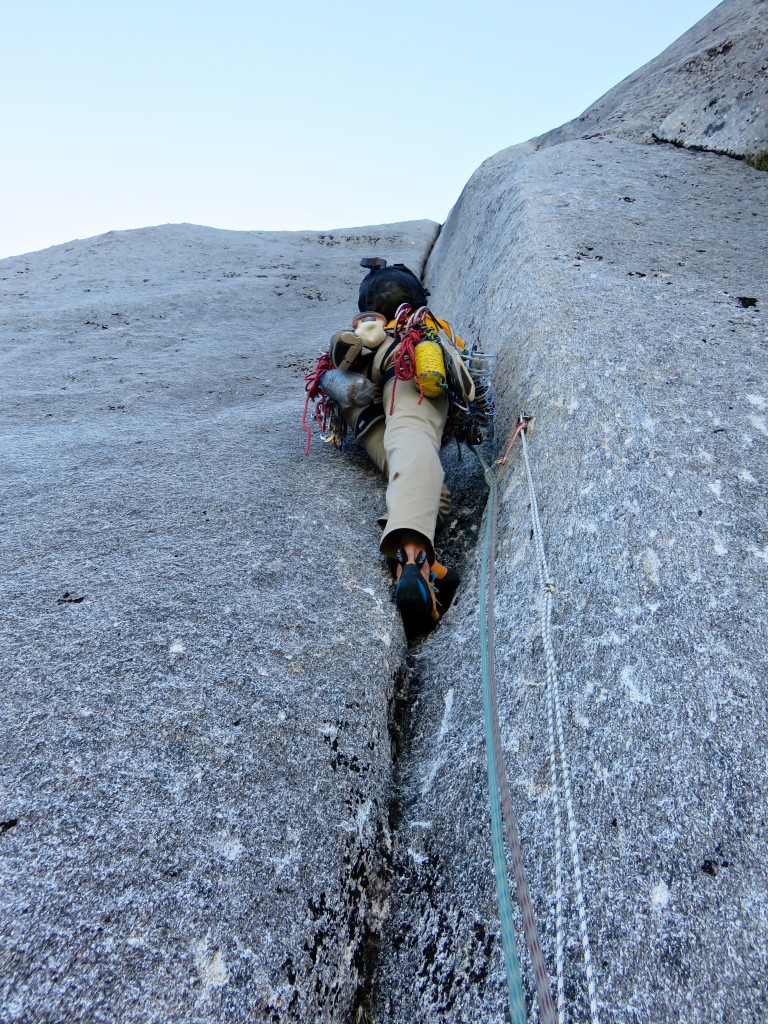 Starting up pitch 6 of Bienvenidos a mi Insomnio – a moderate groove (visible from base of route) to bolted face climbing (less moderate). 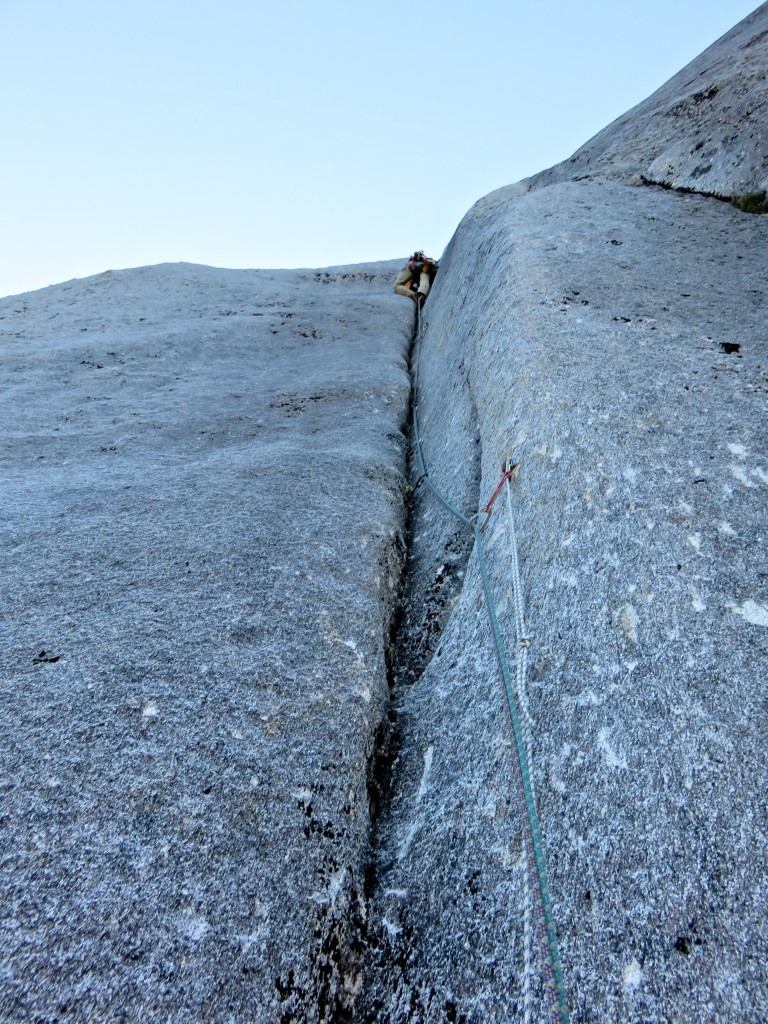 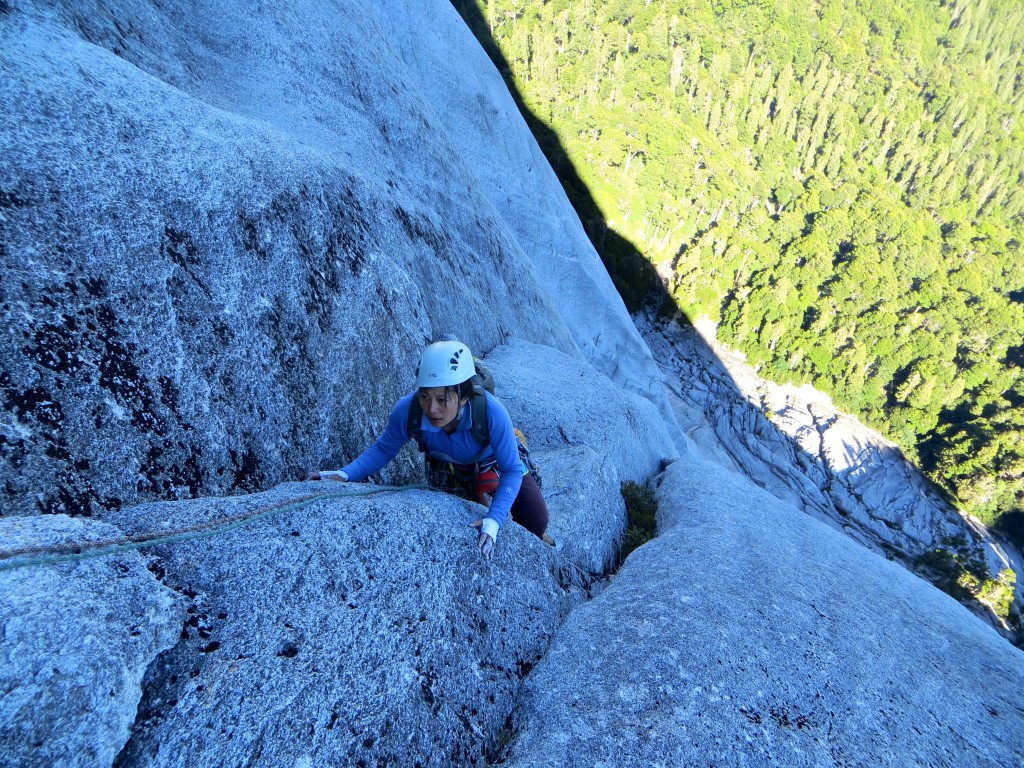 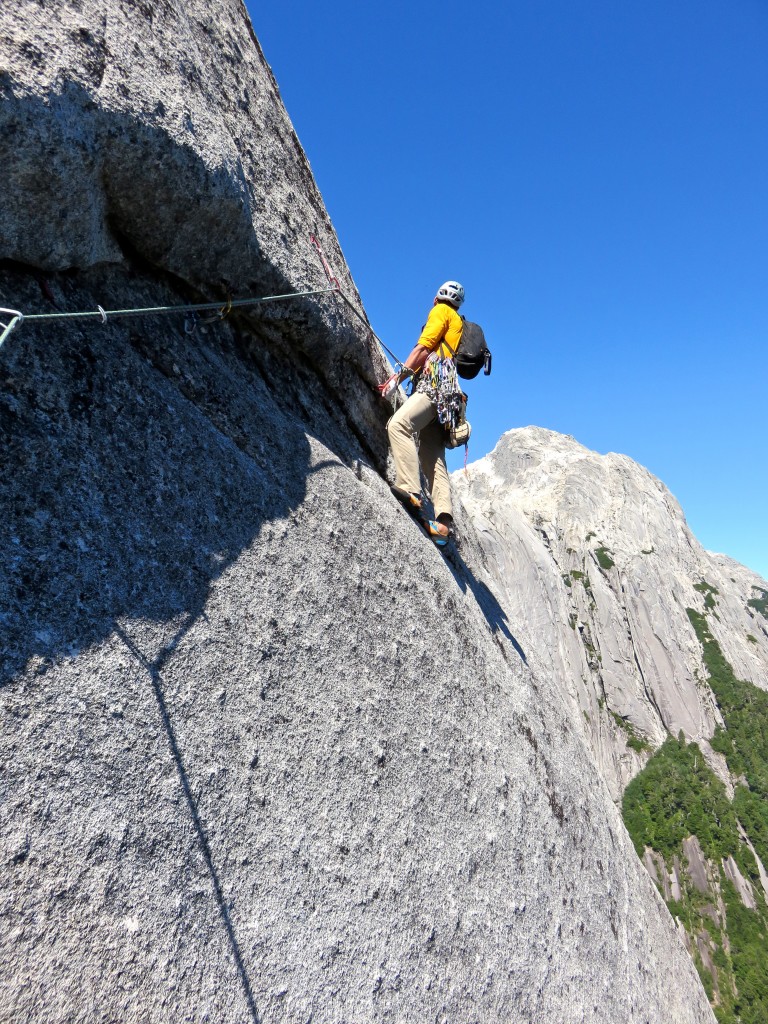 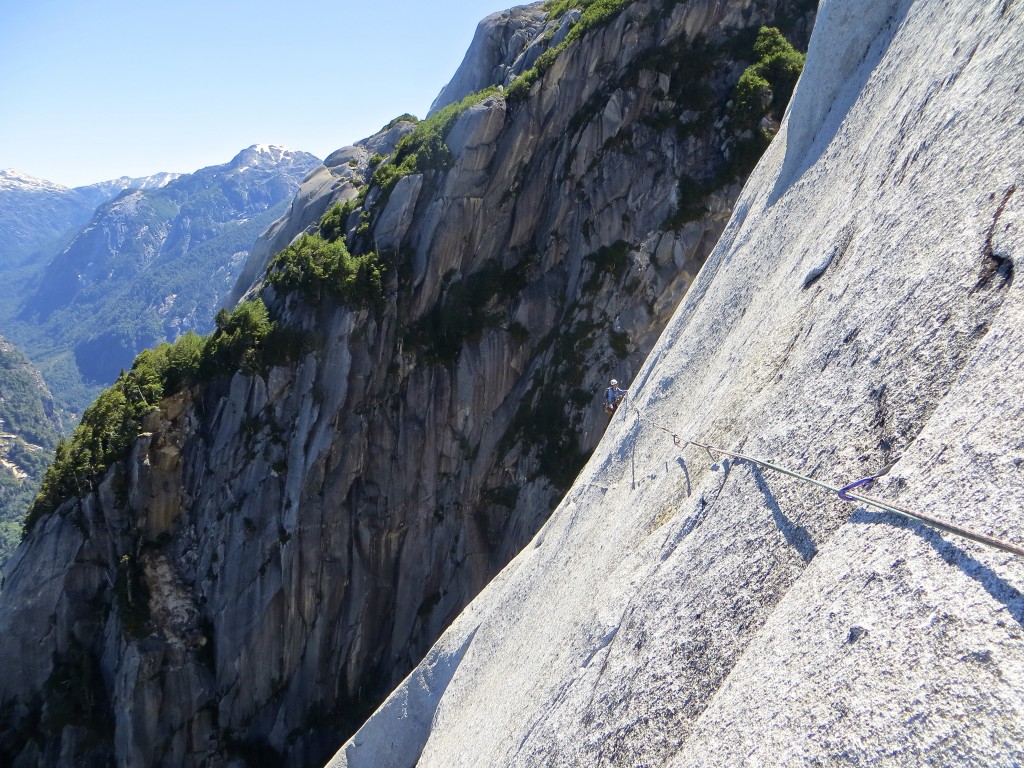 Shirley starting the 35 meter traverse pitch (#8) – even money for both the leader and the second. 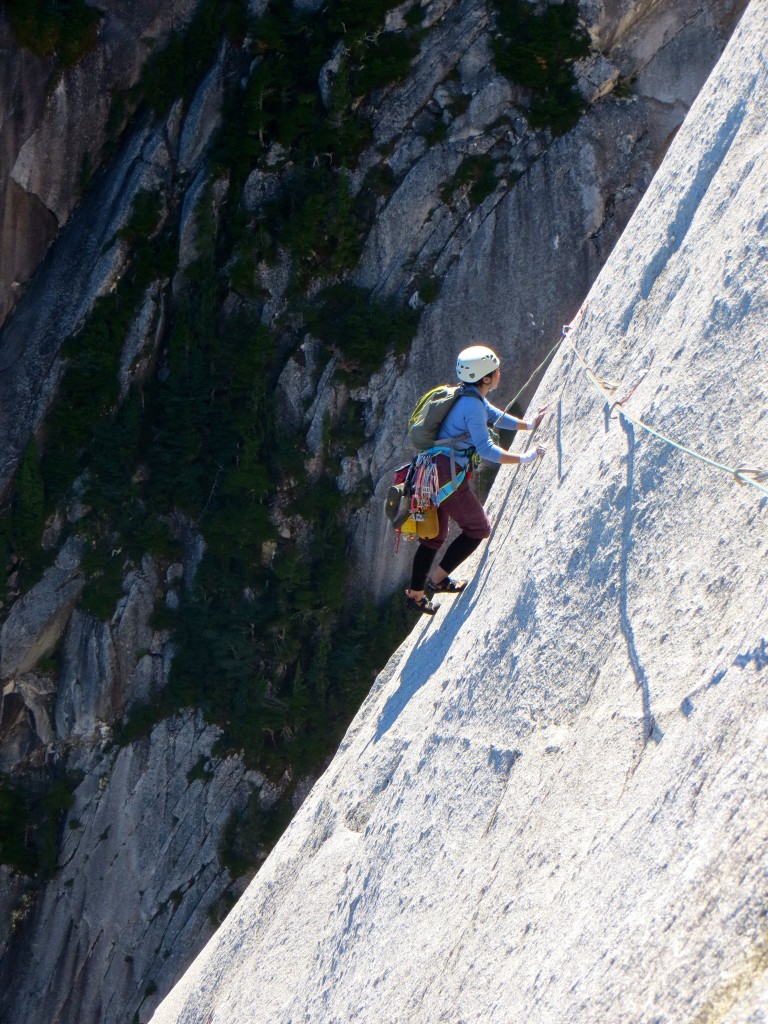 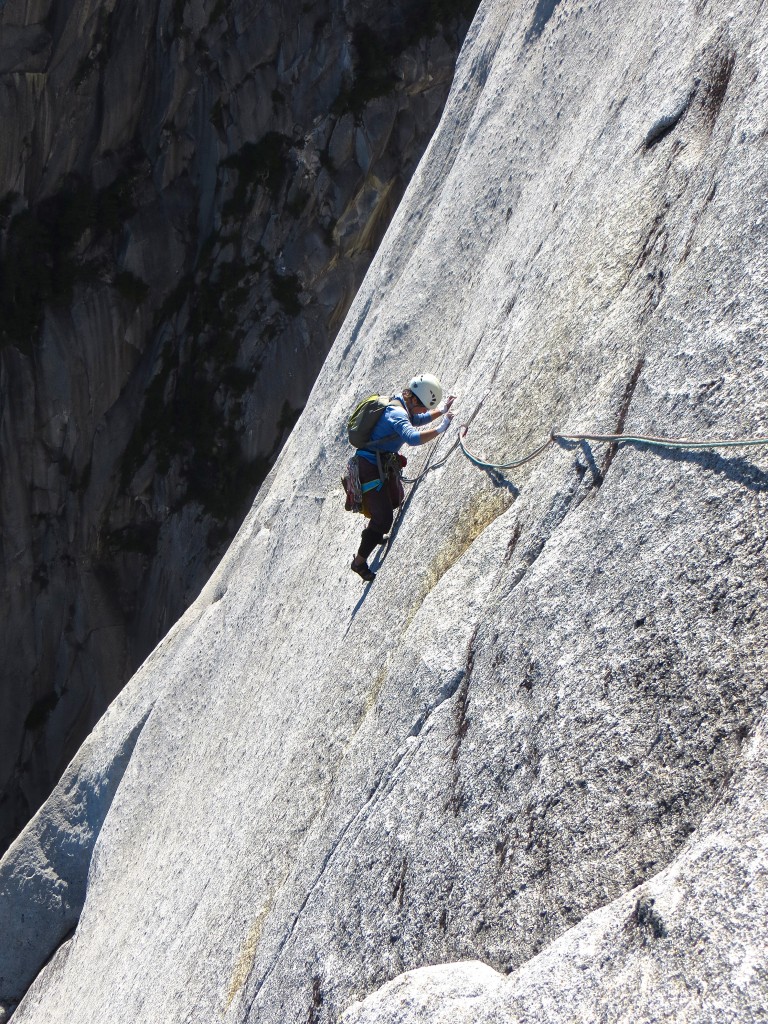 More slab action. I should also mention that the experience was much enhanced by tabanos trying to get into your eyes and mouth…good times (Jan. 2015). 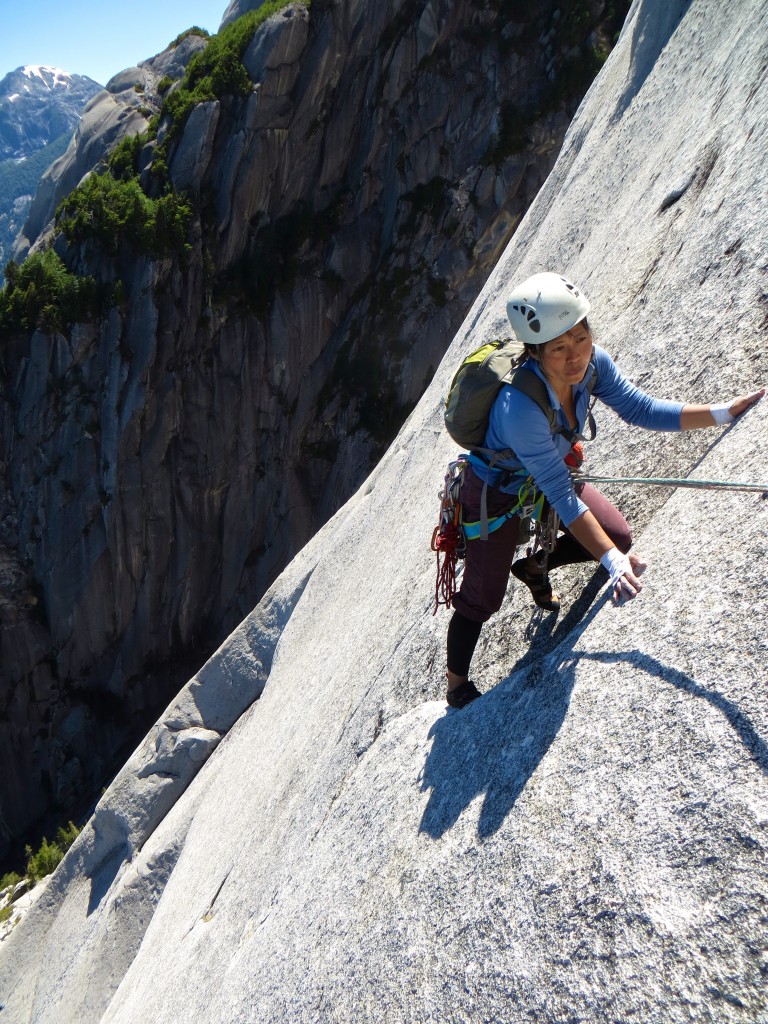 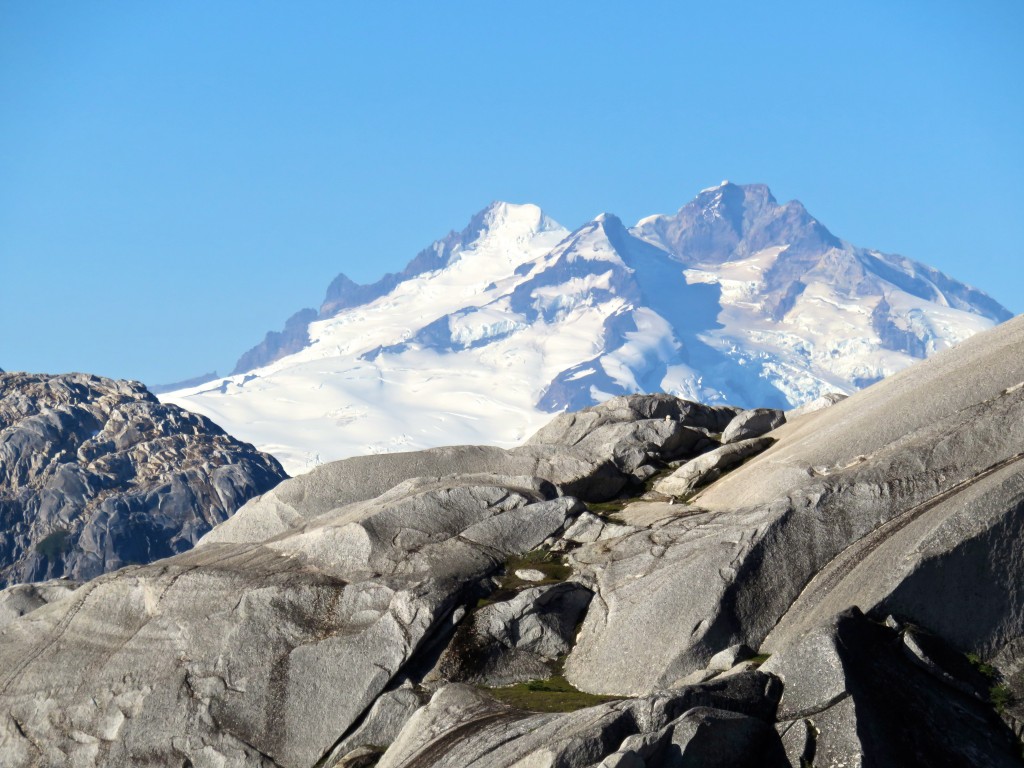 A glaciated volcano that came into view high on the route…not sure which one it is (Jan. 2015). 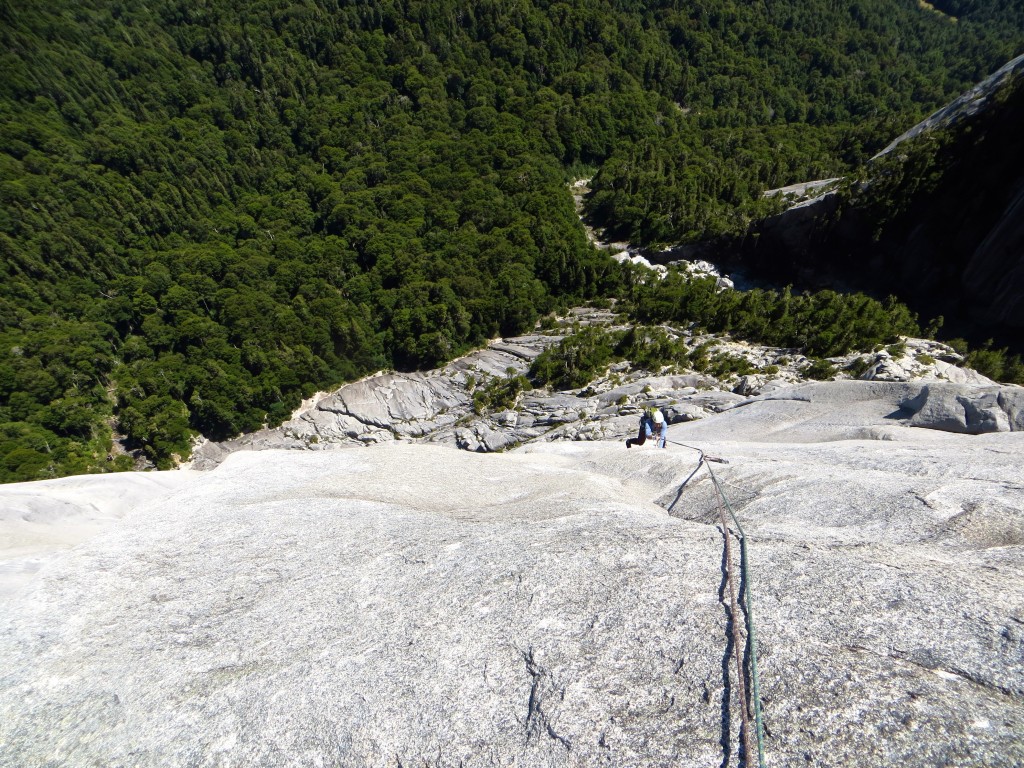 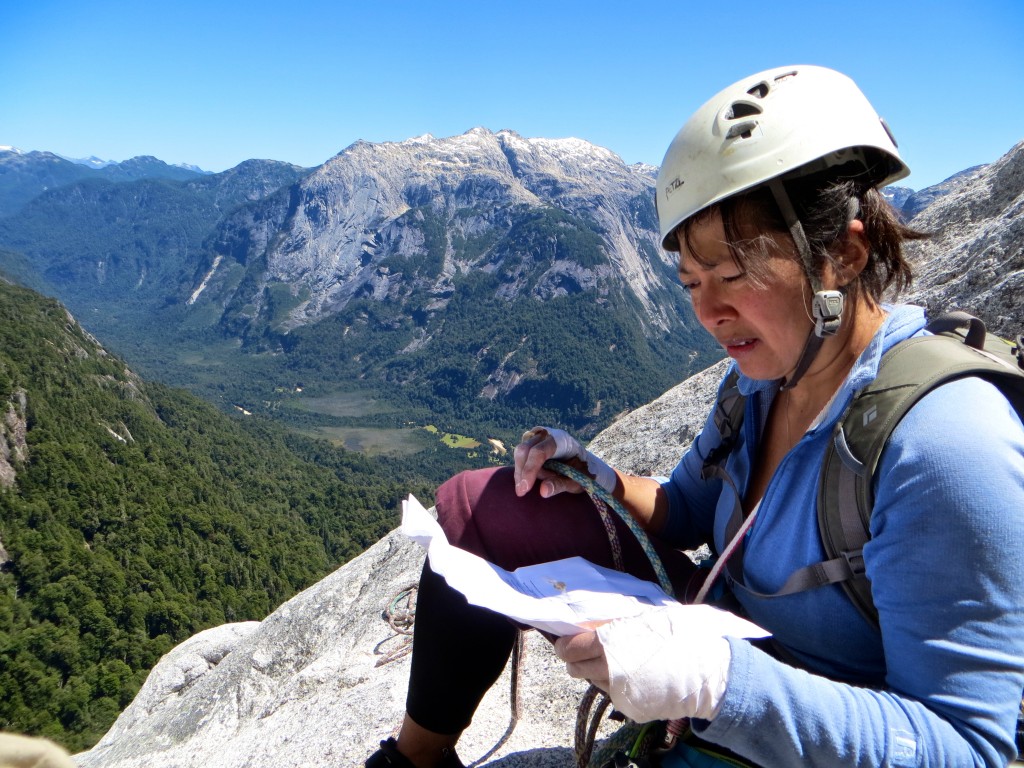 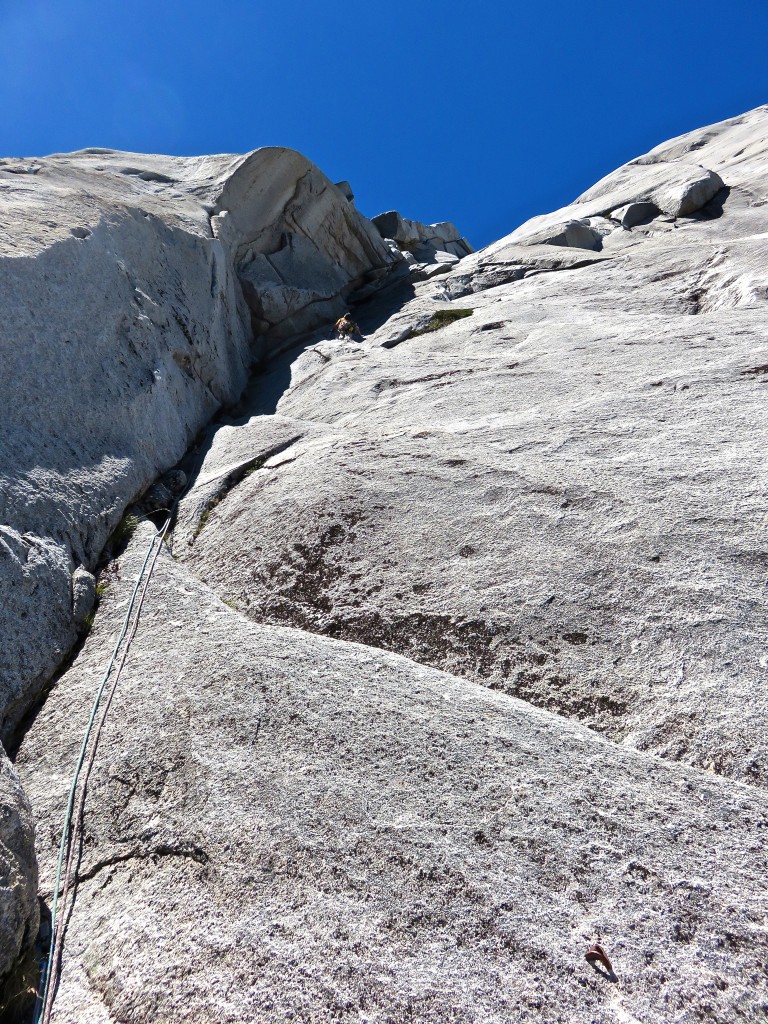 Leading pitch 10 of Bienvenidos a mi Insomnio: a long (60meter) dihedral ending with some invigorating liebacking. The giving continues on the following pitch with a 10c dihedral (Jan. 2015). 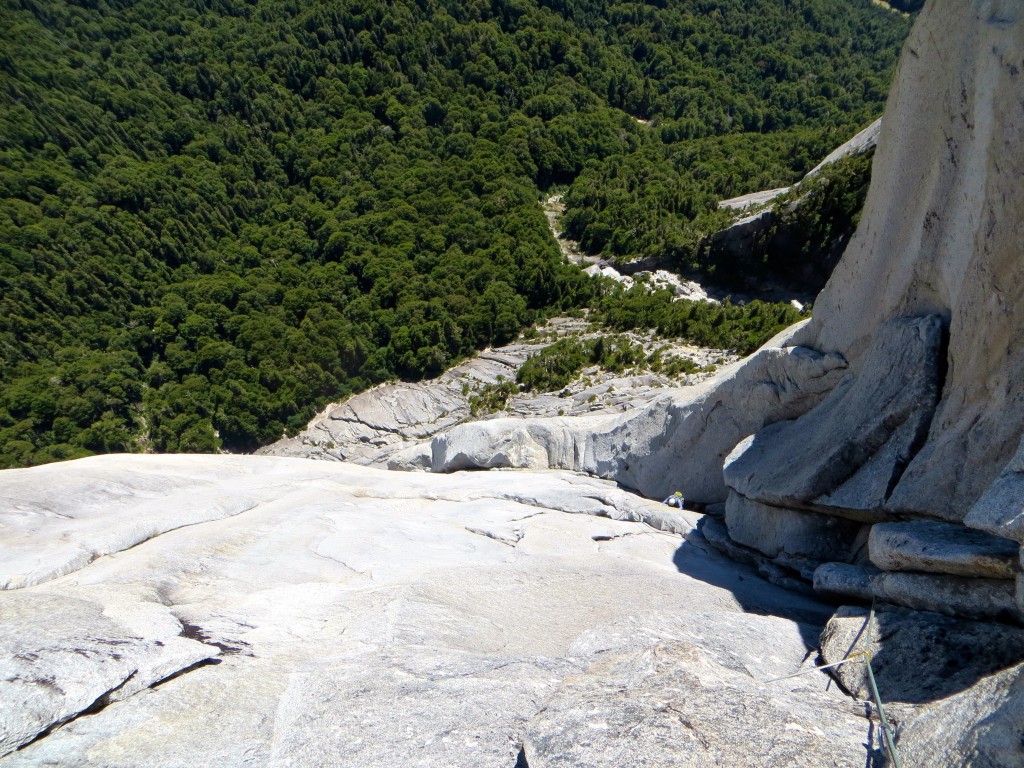 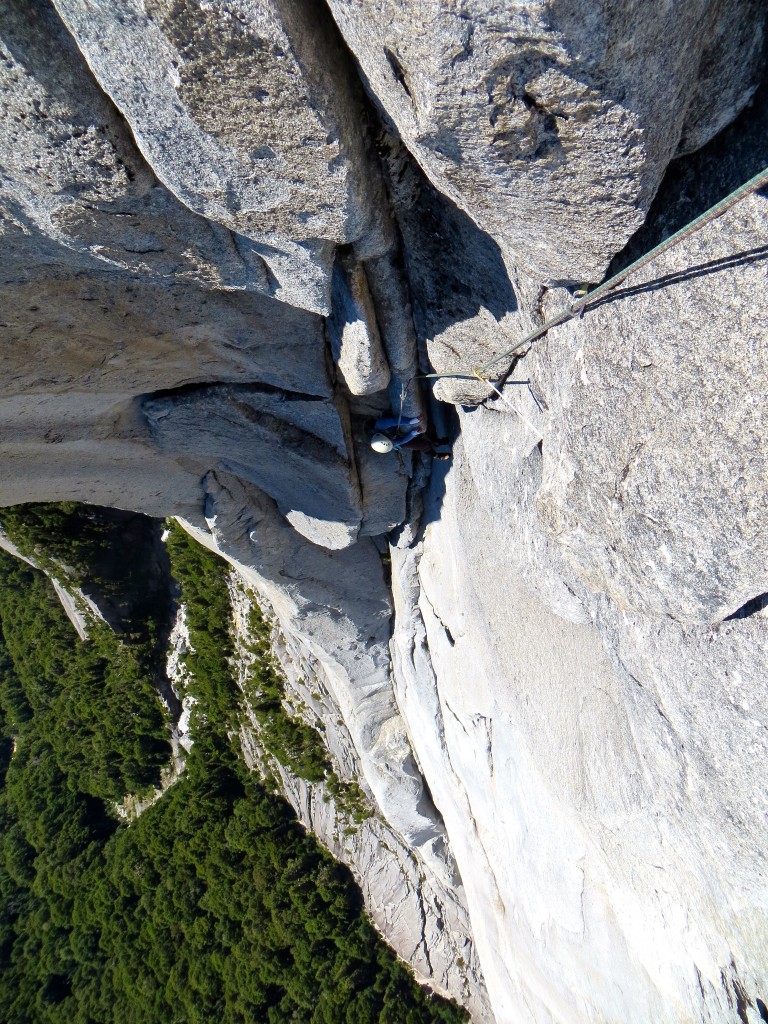 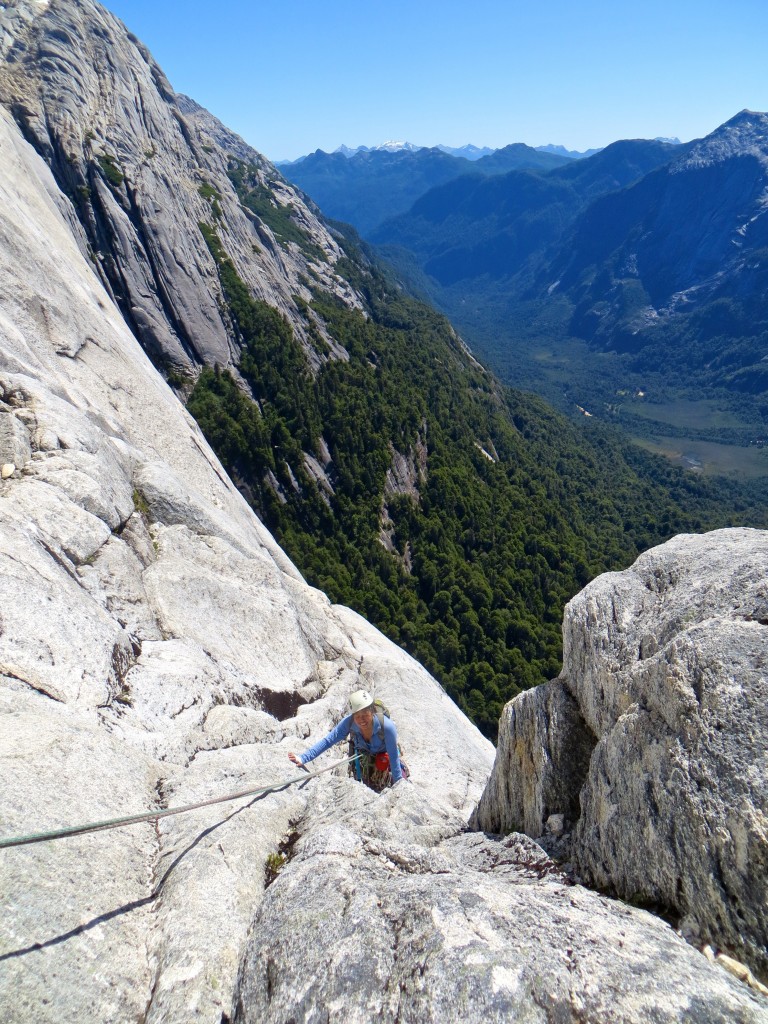 Shirley topping out on pitch 11 (another stemming, linebacking 5.10c). 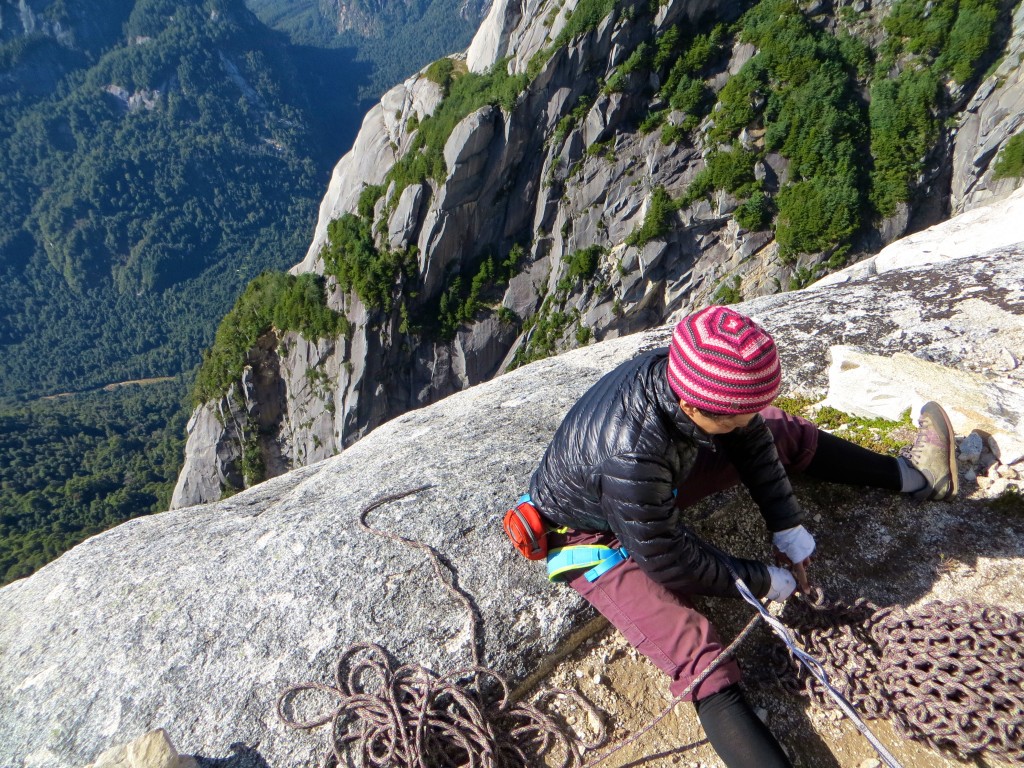 It was about 4:30 pm when we arrived on the pitch 13 bivy ledges. Still had time to top out given the summer daylight but first, we were pretty tired and second, we had bivy gear with us…and as they say, if you bring it, you’ll use it. Shirley’s weaving our twins into mats. 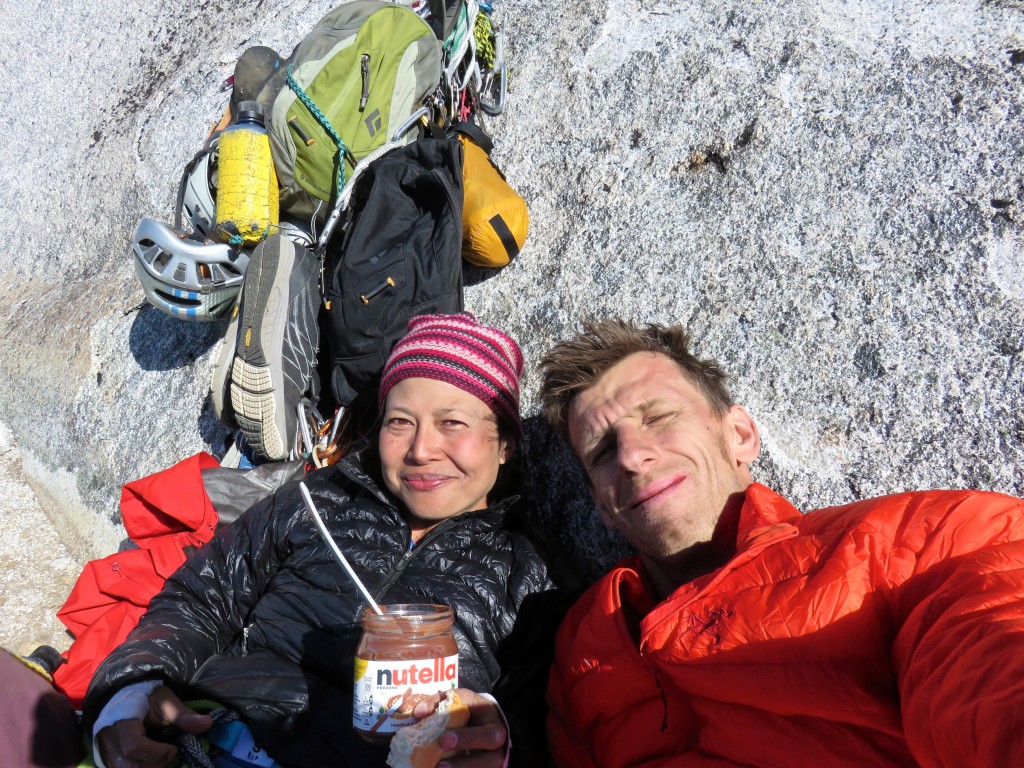 Calling it a day atop pitch 13. Nutella jar scrapings and two stale bagels…and a nalgene+ of water. We were set for a nice evening (Jan. 2015). 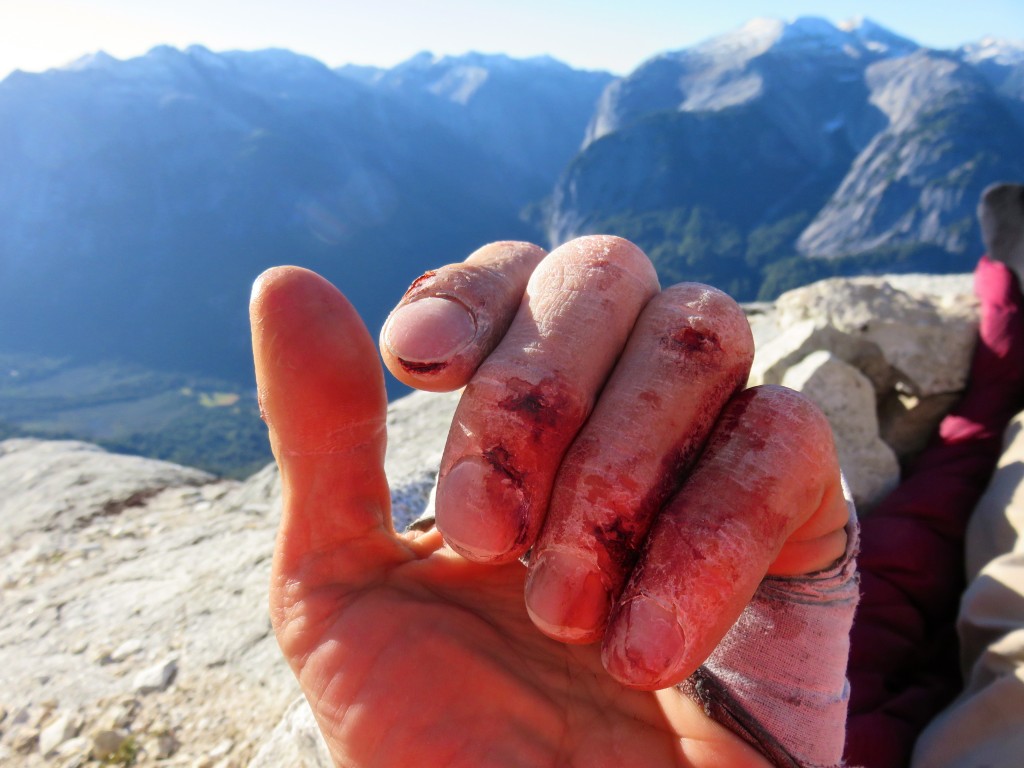 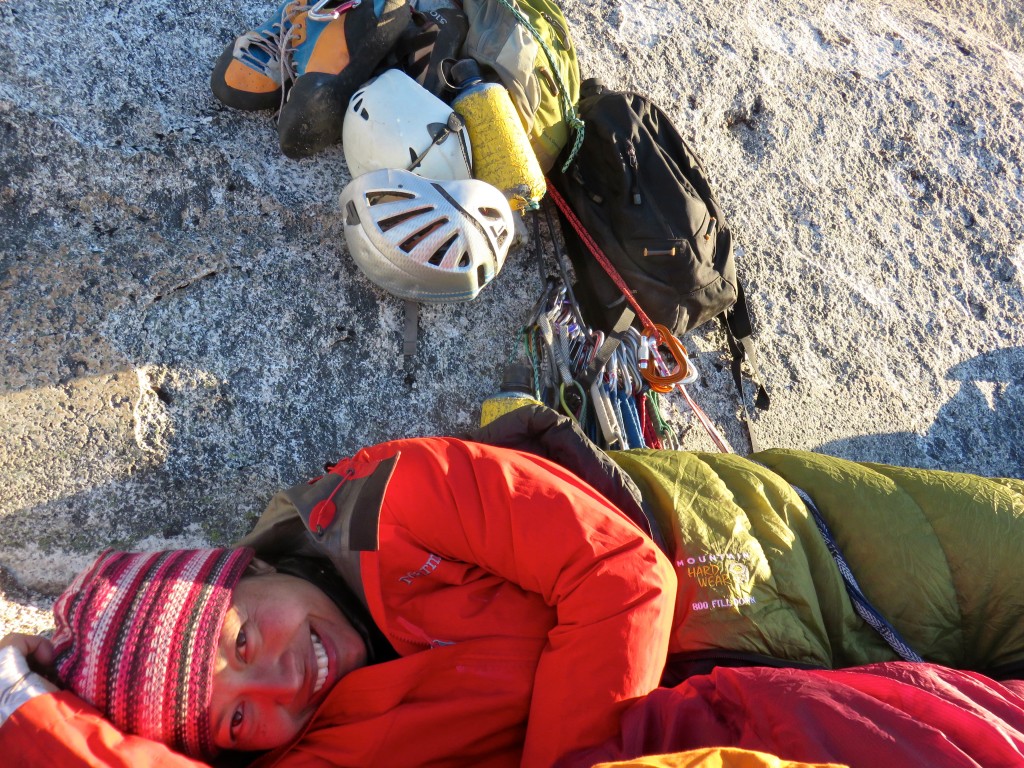 Despite the moderate winds, we were quite comfy during the night in our lightweight bags…only concern was that the weather remain dry (Jan. 2015). 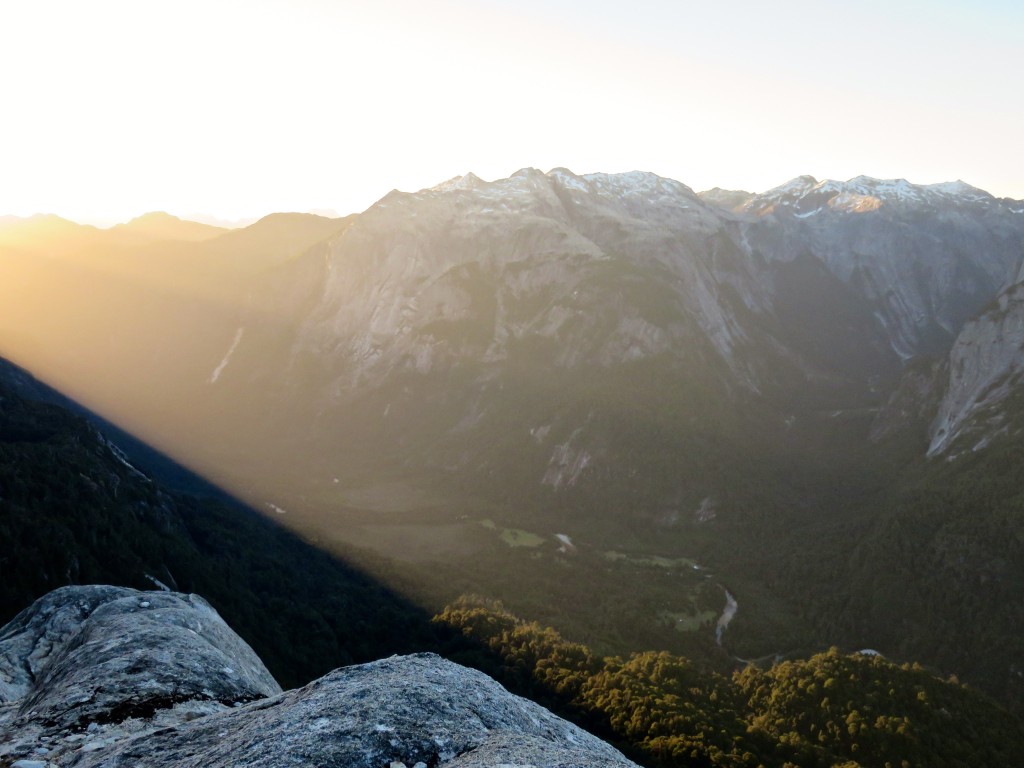 Go to Bienvenidos a mi Insomnio 2.
Go back to Cochamo.