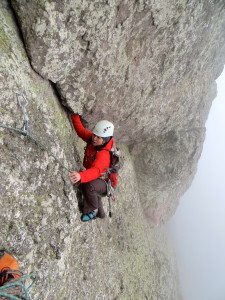 In the morning, drizzle and dense fog greeted us. A 45 minute drive on some winding cobblestone roads brought us to what we thought was the trailhead for the La Tanda formation. This was supposed to be home of a 5-pitch 5.10b climb (Mas Alla De La Estrellas) on a steep conglomerate wall. With little hope of climbing, we nevertheless grabbed our gear and hiked up to the base in a drizzle. After a bit of back and forth, we finally found Mas Alla De La Estrellas…running wet and mossy. A sort of incremental progression would be a recurring theme on this trip: well, it’s raining so let’s just drive to the trailhead….let’s just hike to the base….let’s just try the first pitch…Three wet and slick pitches up we were staring at a hard looking roof. The climbing thus far was likely no harder than 5.8 or 5.9 but the slickness of the rock and the moss made it pretty lively. The rain was now picking up but we got up this high…The roof (not 5.10-) got by-passed via some moss pulling variation on the left and we were soon atop pitch 4 looking at a 20’ bolt ladder through some steep and thin terrain to the top. It was raining harder, we were both wet and pretty sick of the whole package. So we rapped without finishing. 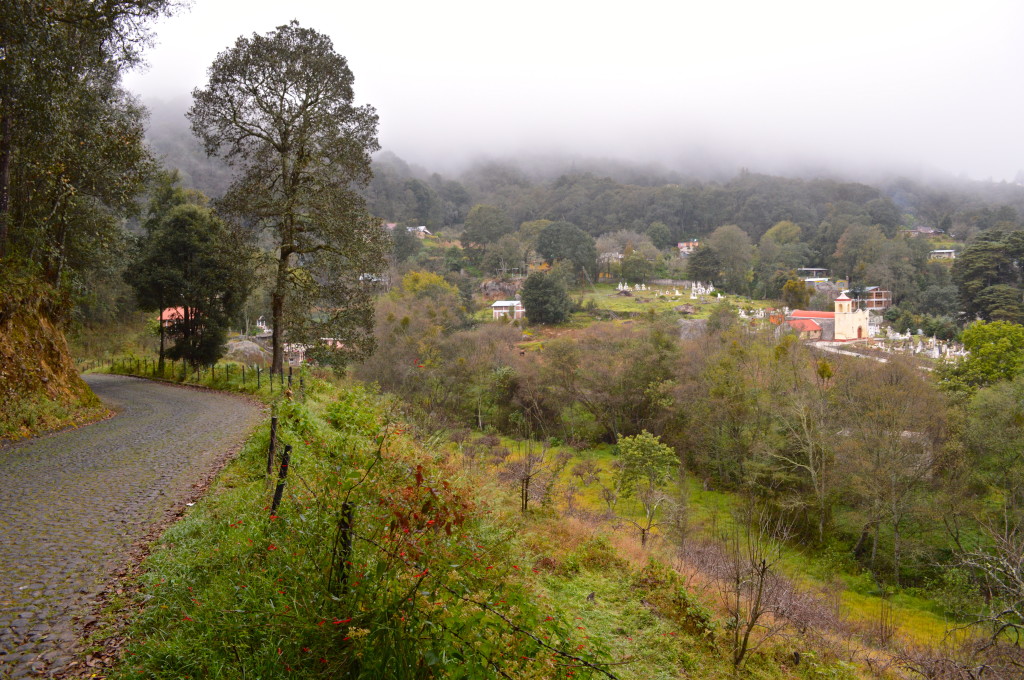 On day two we drove out in search of the La Tanda formation – this is the cobbled Camino de Truchas (Dec. 2013). 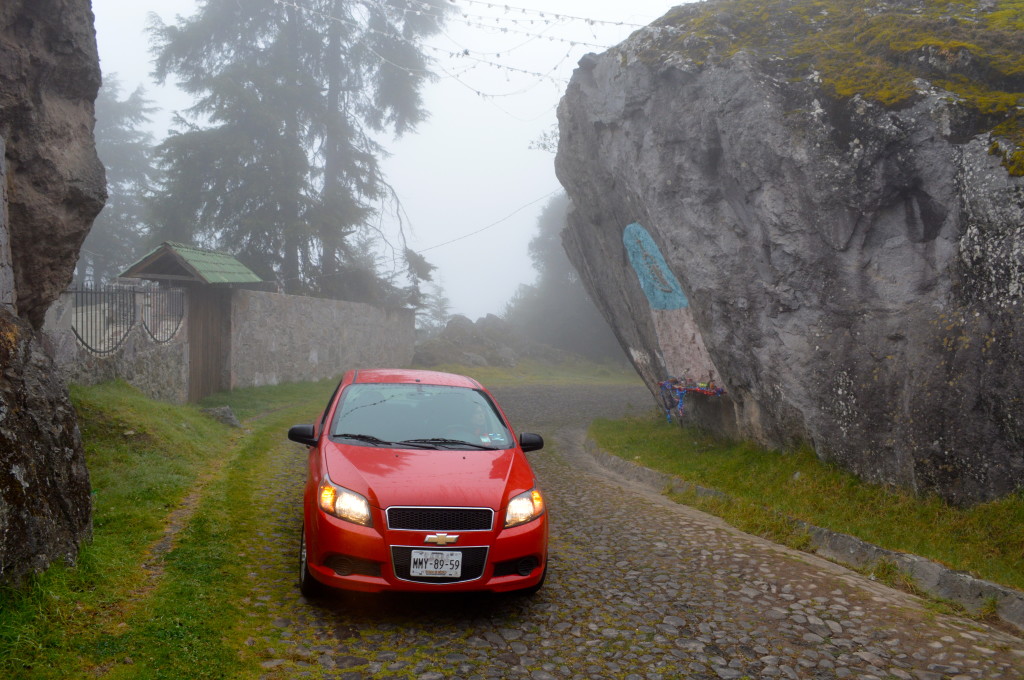 Looking for La Tanda formation – not a totally trivial task given the 100 foot visibility that day (Dec. 2013). 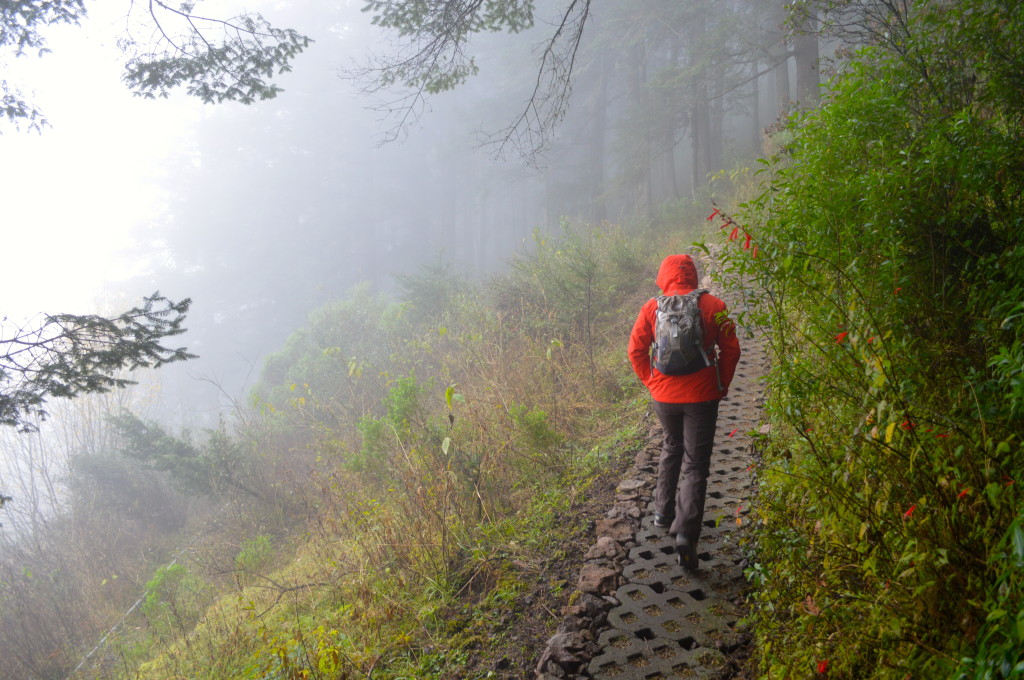 Shirley hiking up to the La Tanda base in fog and light drizzle. This nice path is apparently privately owned (so we were told but given permission)…guessing it has to do with the bullshit via ferrata that now graces the formation (what a shame; Dec. 2013). 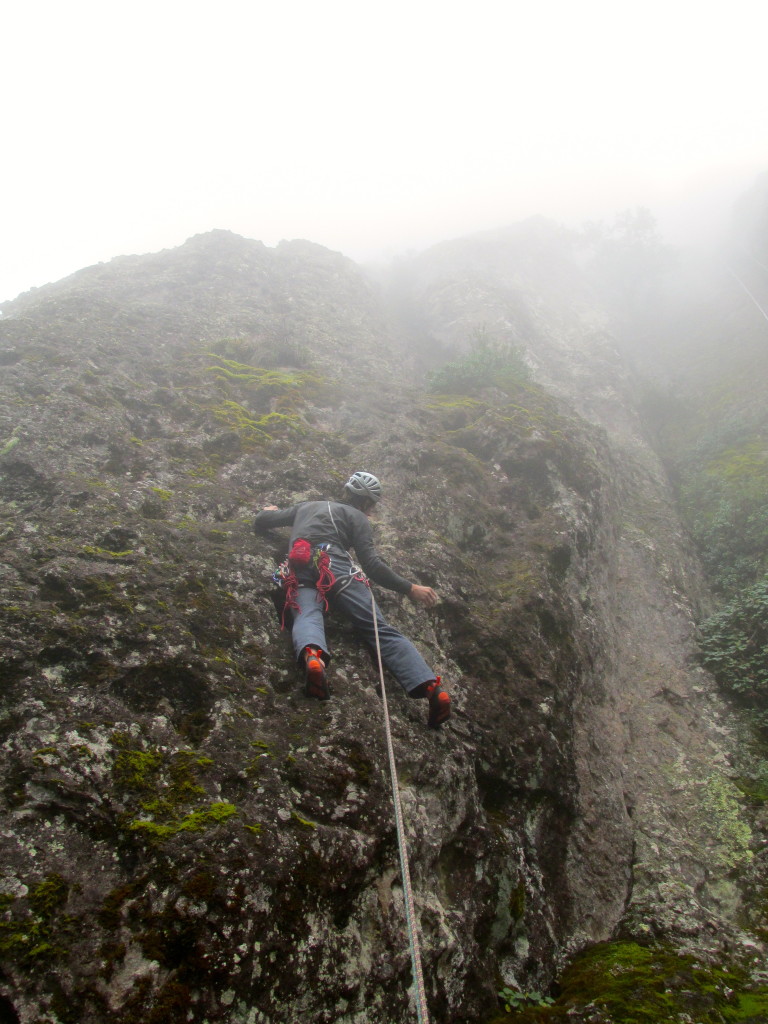 Starting the Mas Alla De Las Estrellas (5.10b) in some pretty shitty conditions. Scrape the moss off the next foothold and try to dry and repeat for the next four pitches (Dec. 2013). 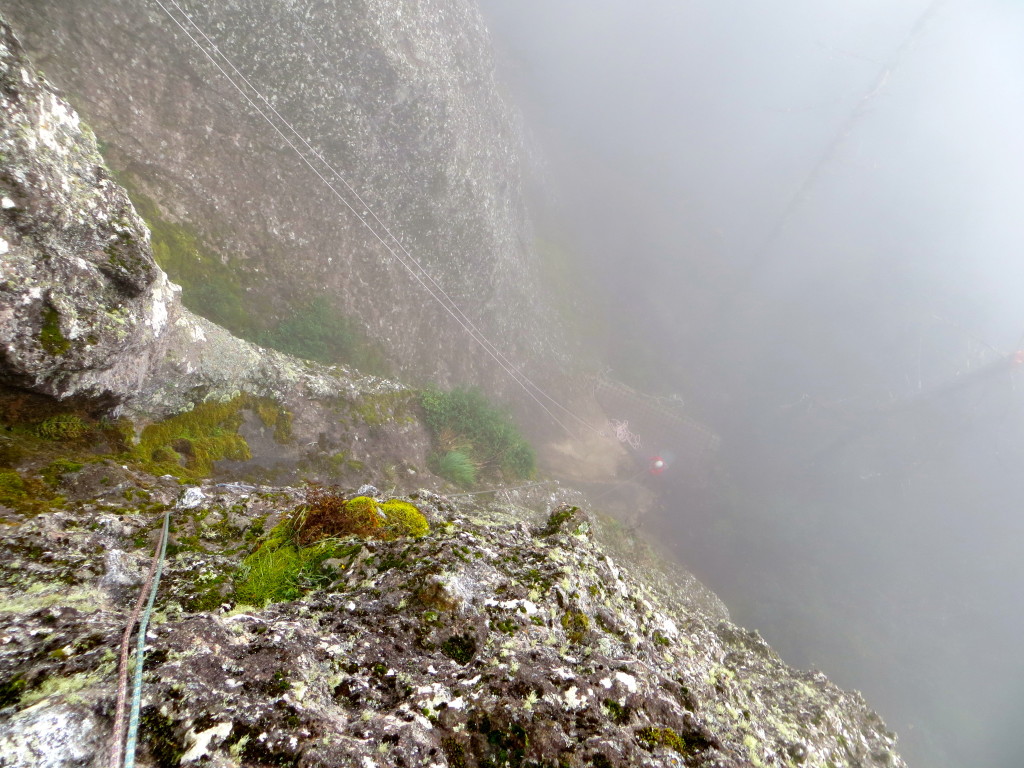 Looking back at Shirley from near the top of the first pitch of Mas Alla De Las Estrellas…drizzle and fog – perfect conditions for some mossy face climbing (Dec. 2013). 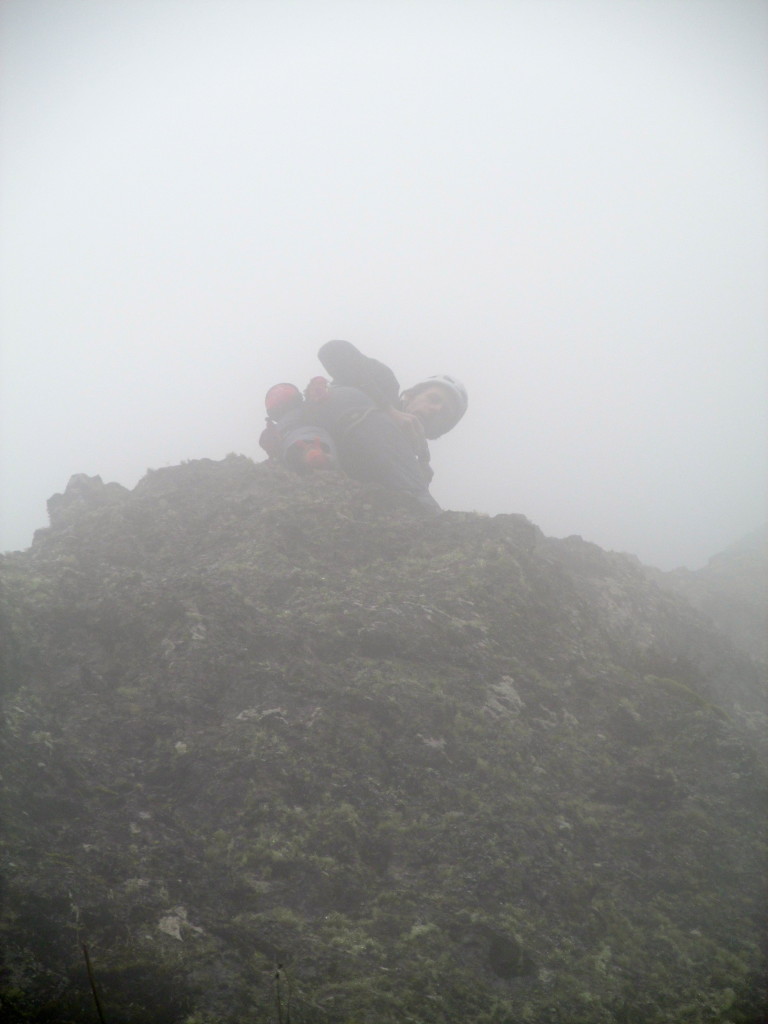 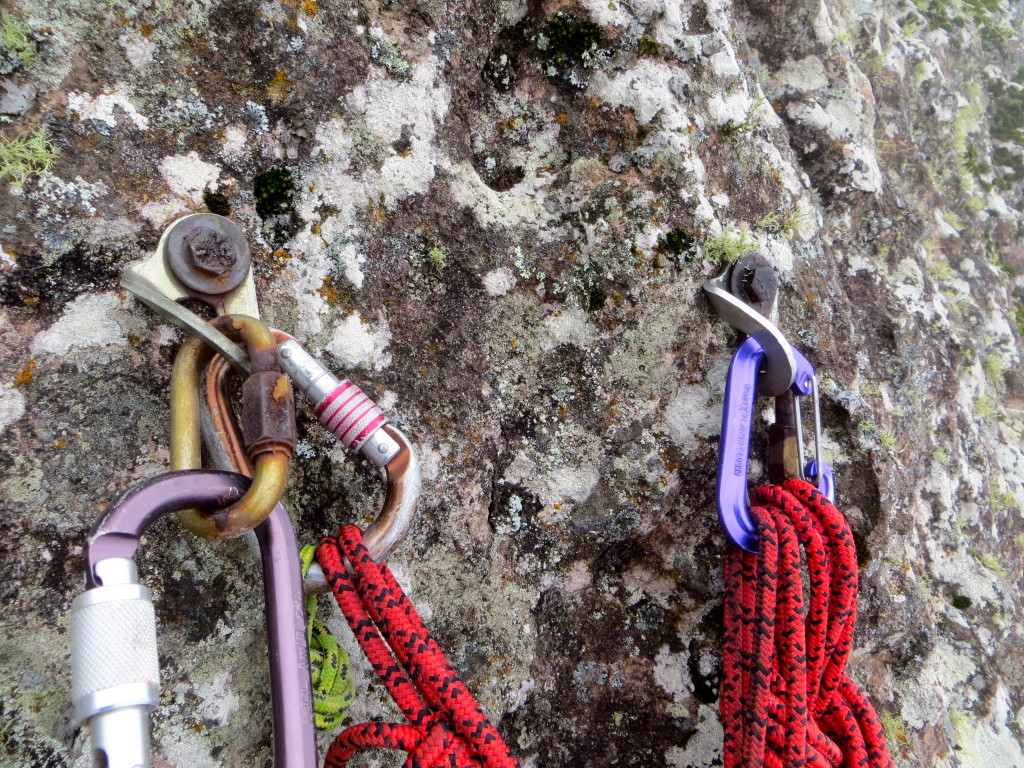 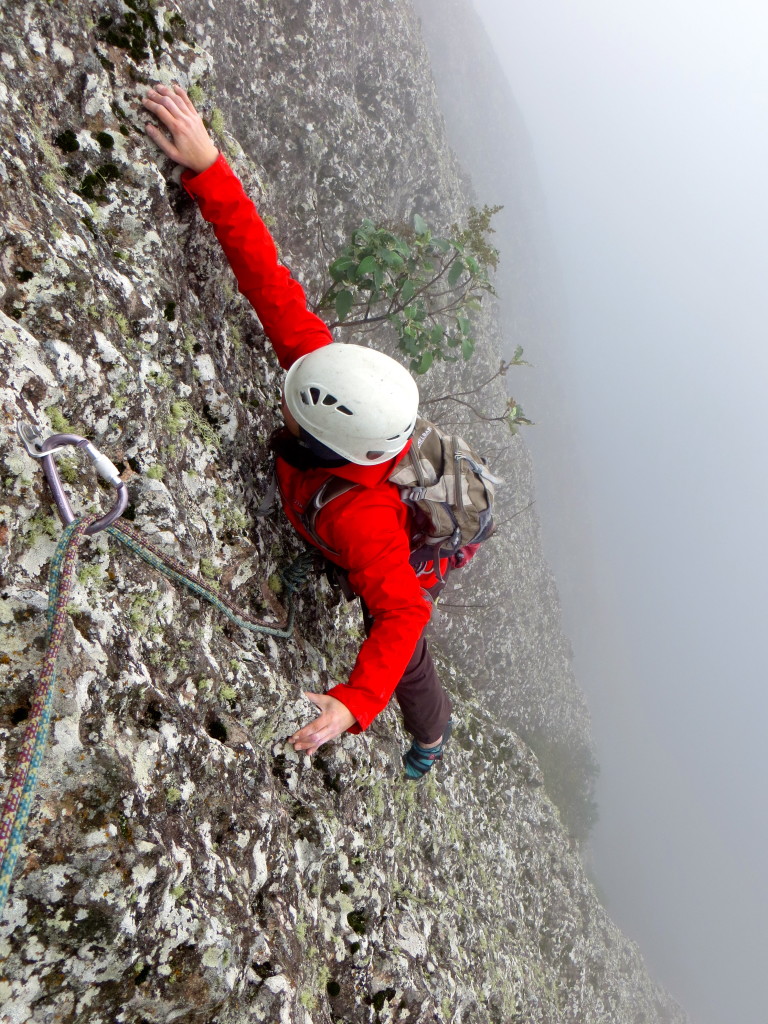 Top of the second pitch (we did this in one long pitch…ran out of QDs) of Mas Alla De Las Estrellas (Dec. 2013). 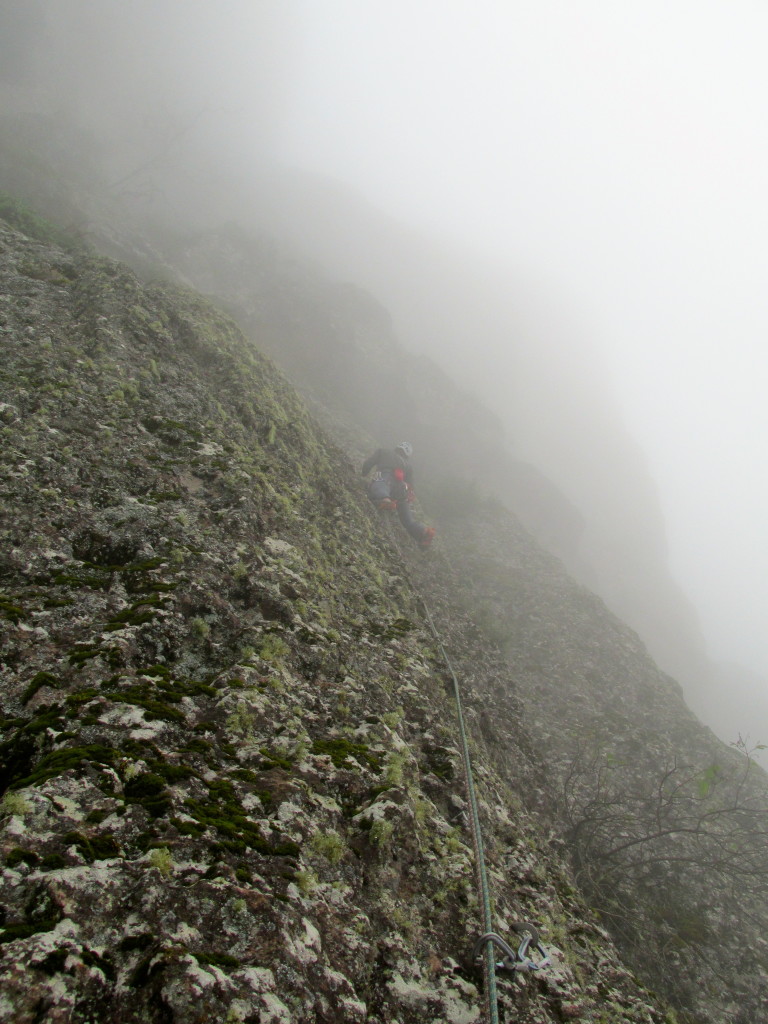 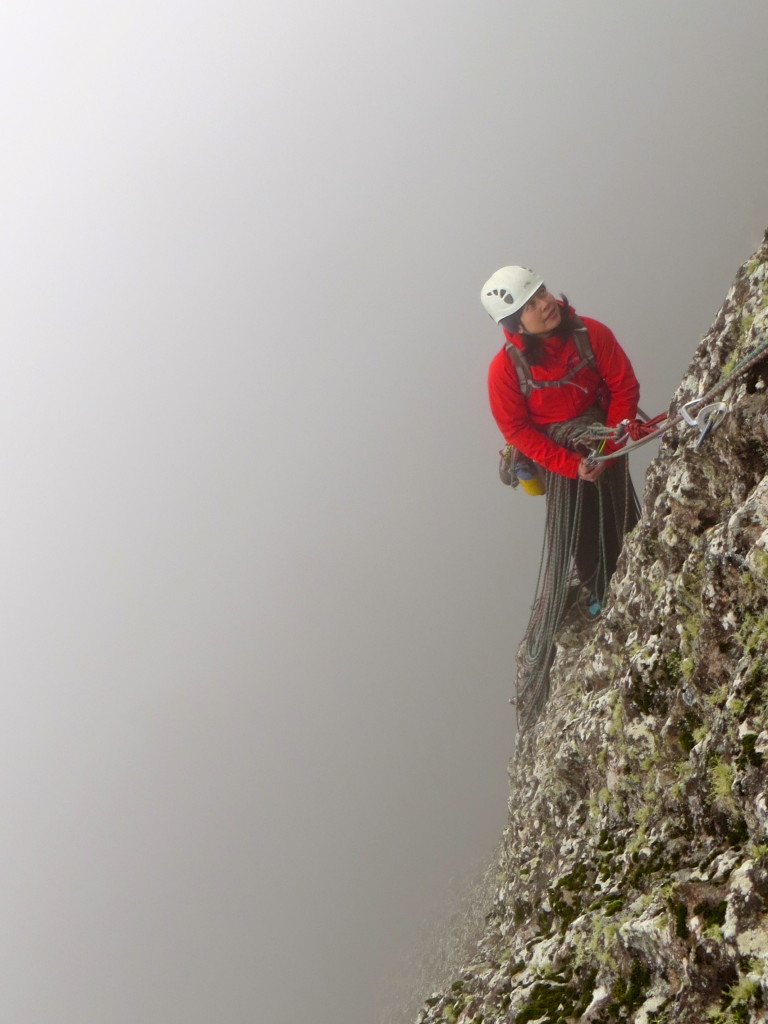 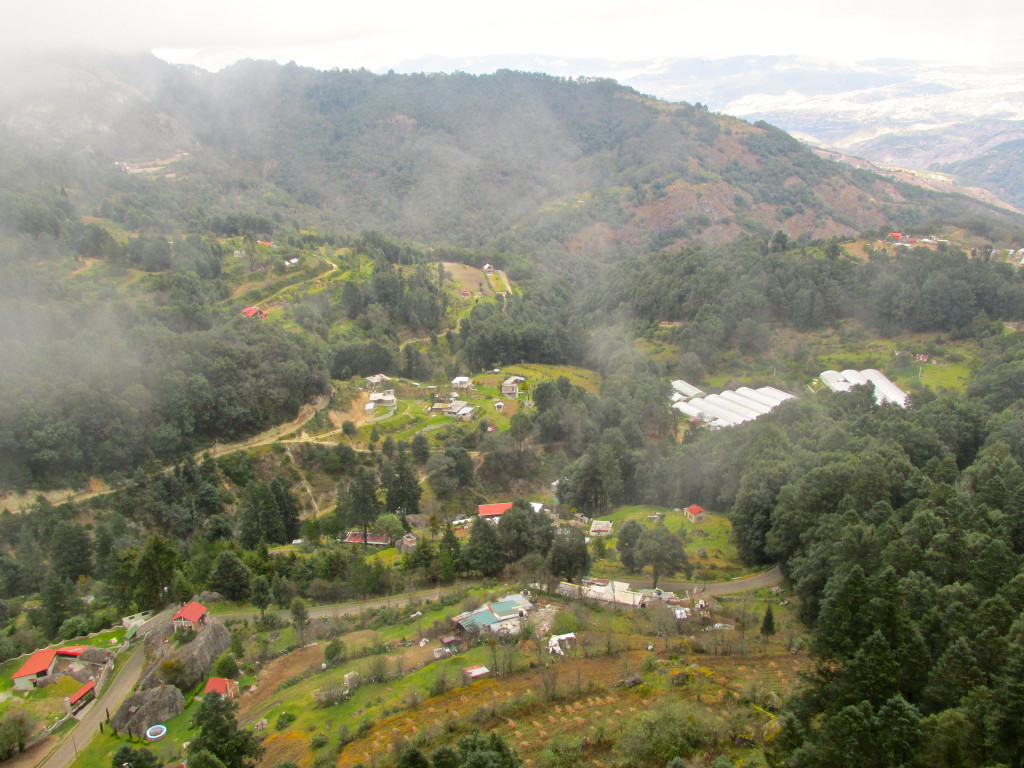 A very brief opening in the clouds allowed a view of a small village at the base of the La Tanda formation from high on Mas Alla De Las Estrellas route (Dec. 2013). 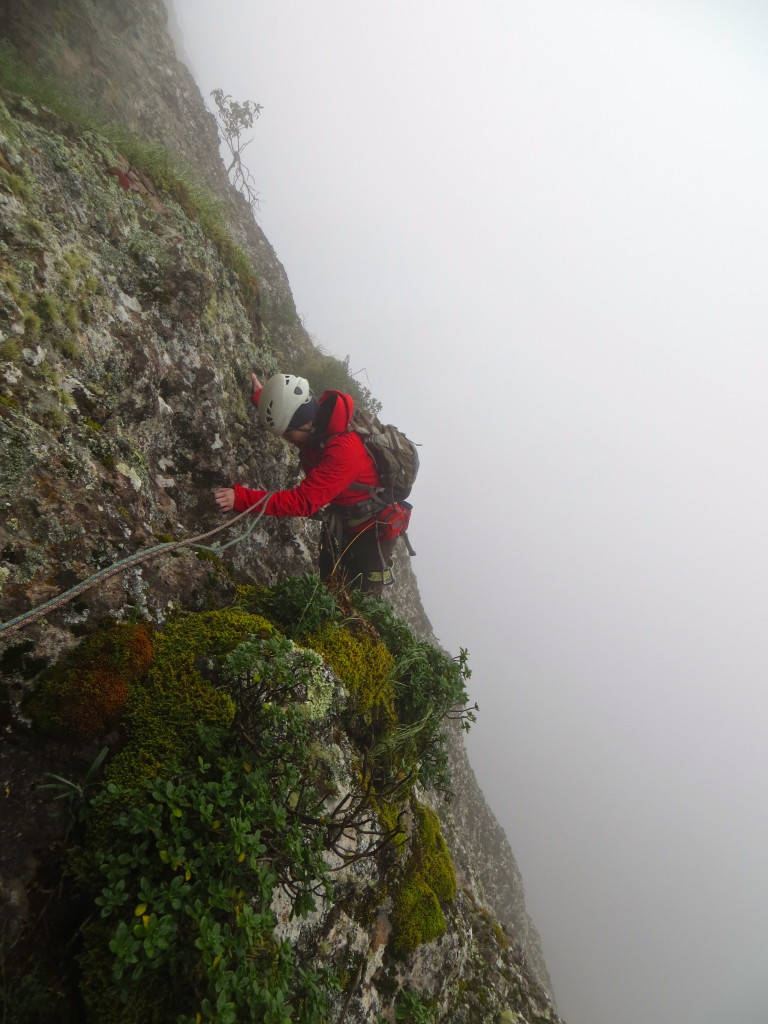 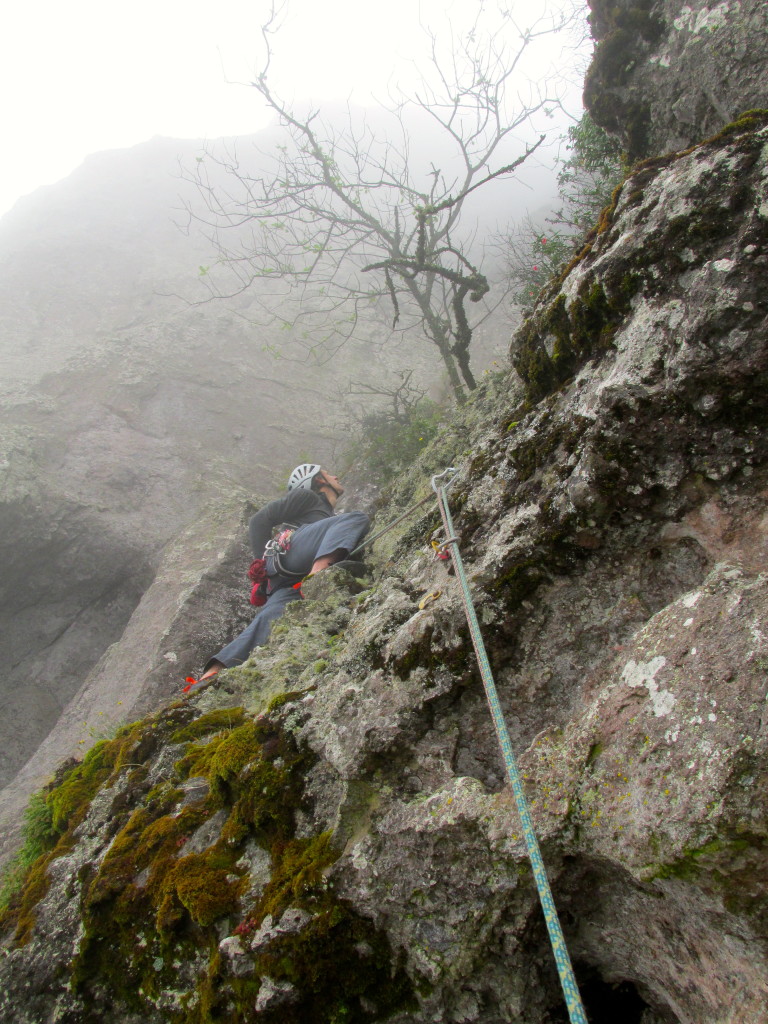 Our third pitch…probably the more mossy variation around a hard looking roof (Dec. 2013). 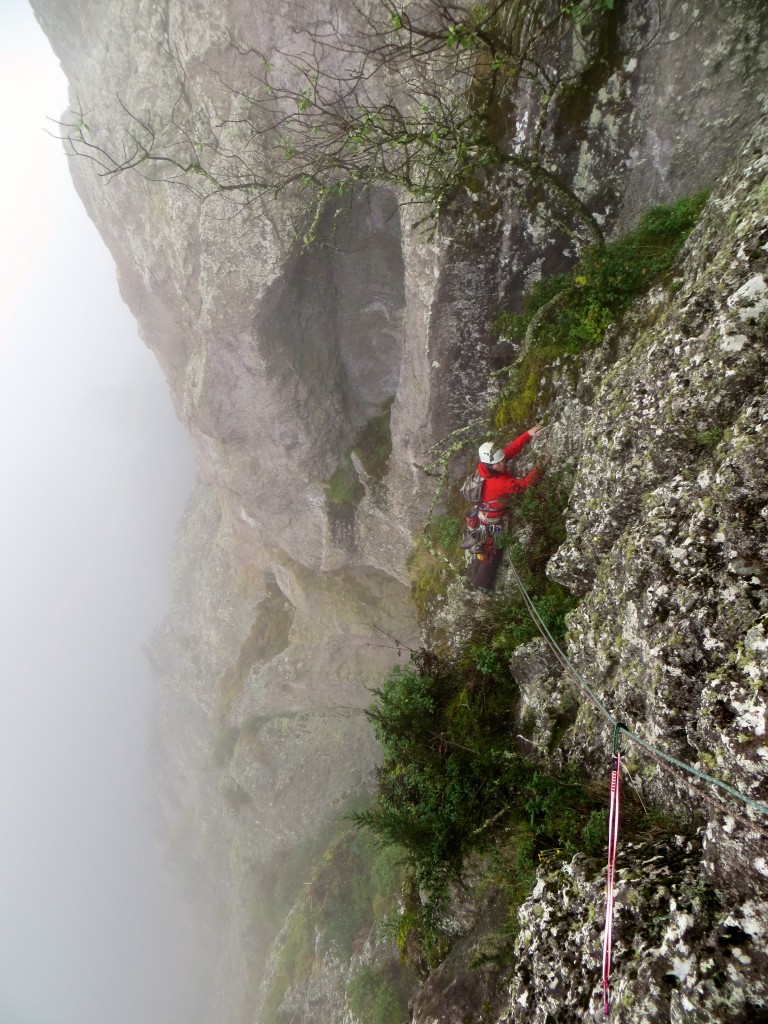 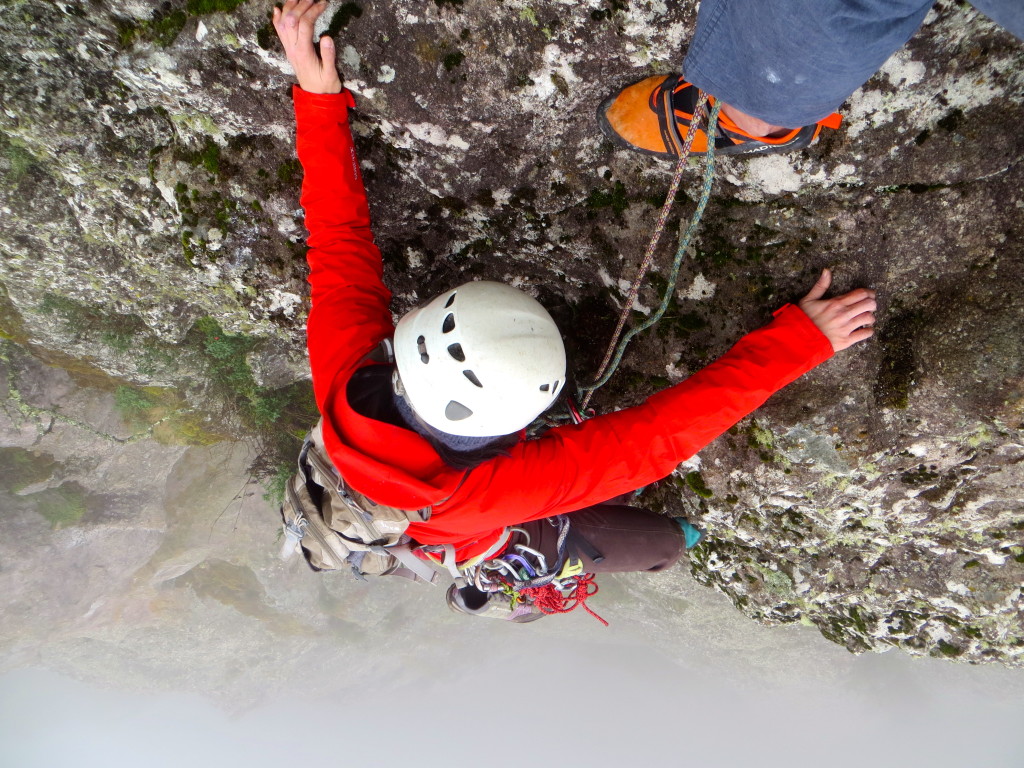 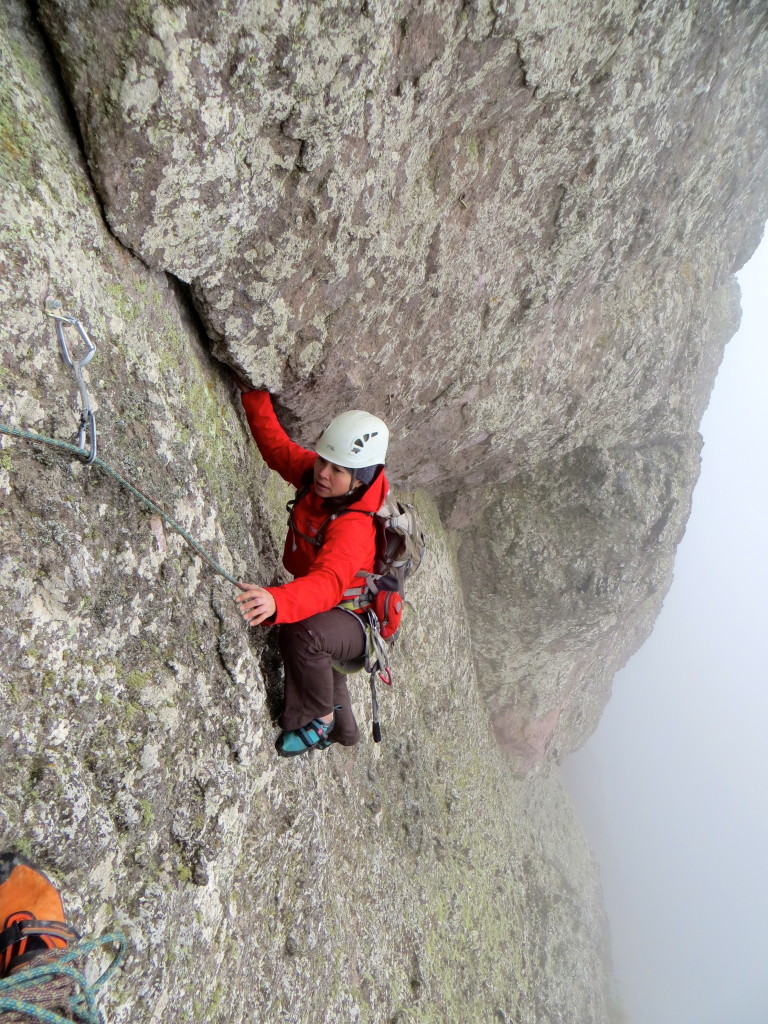 Shirley nearing the top of the 4th pitch of Mas Alla De Las Estrellas (5.10b). This was our highpoint on this shitty weather day (Dec. 2013). 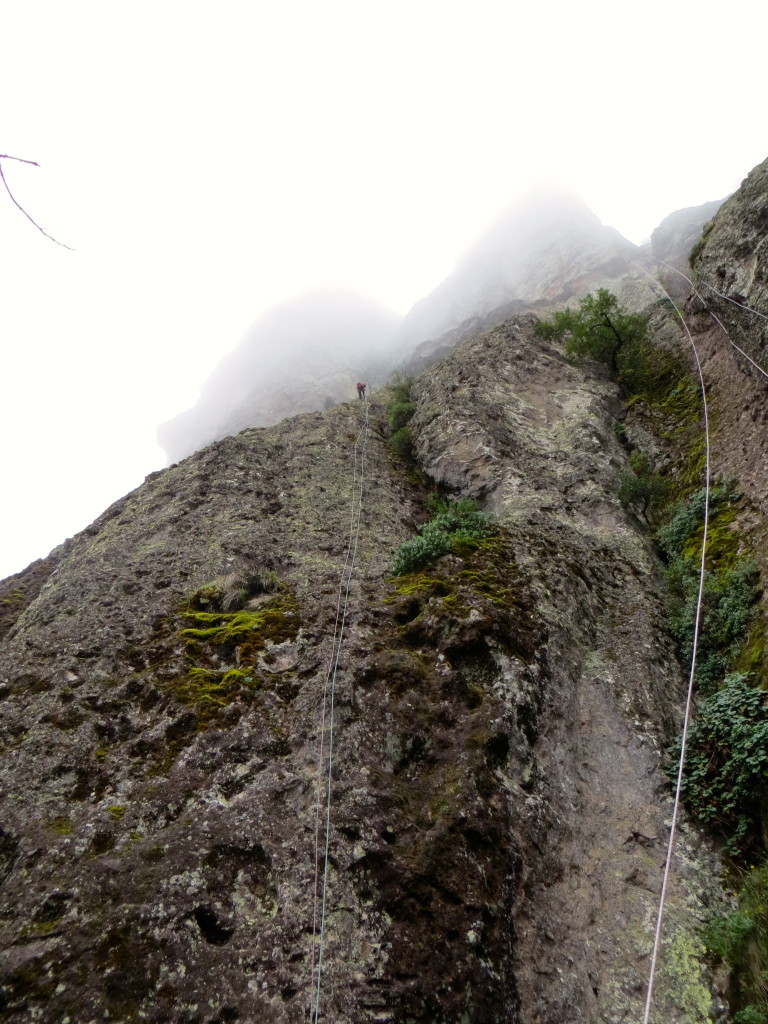 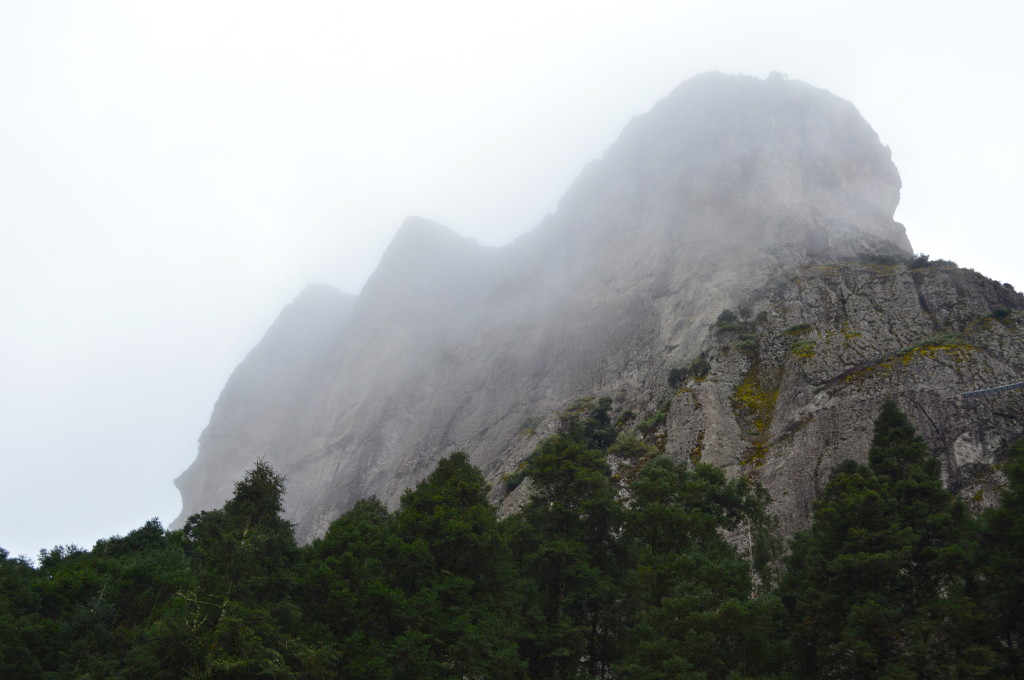 After we rapped off, we got our only view of our climbing objective that day. The window closed 30 seconds later (Dec. 2013). 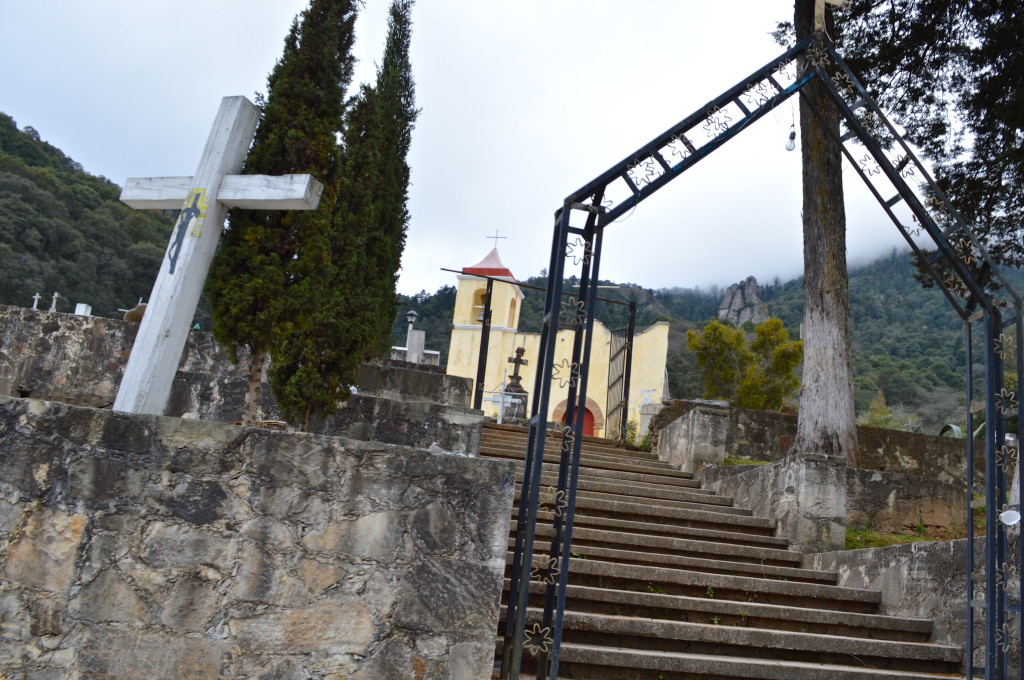 Some random sights (most heavily Catholic in flavor of course) on our drive back to Mineral del Chico (Dec. 2013). 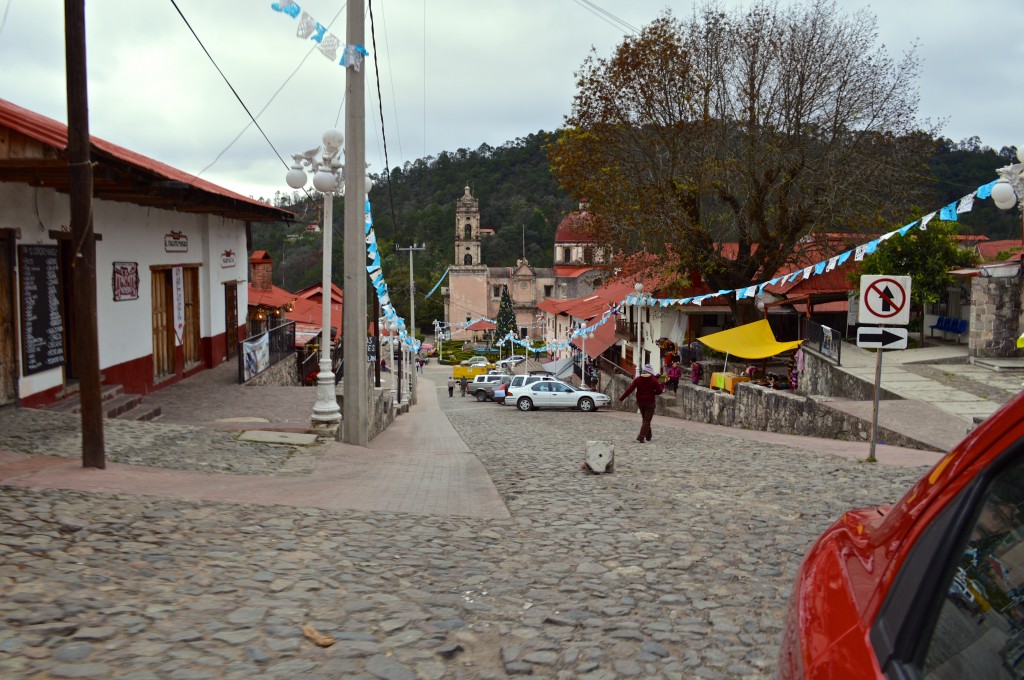 Bidding farewell to Mineral Del Chico. Setting out towards Queretaro. 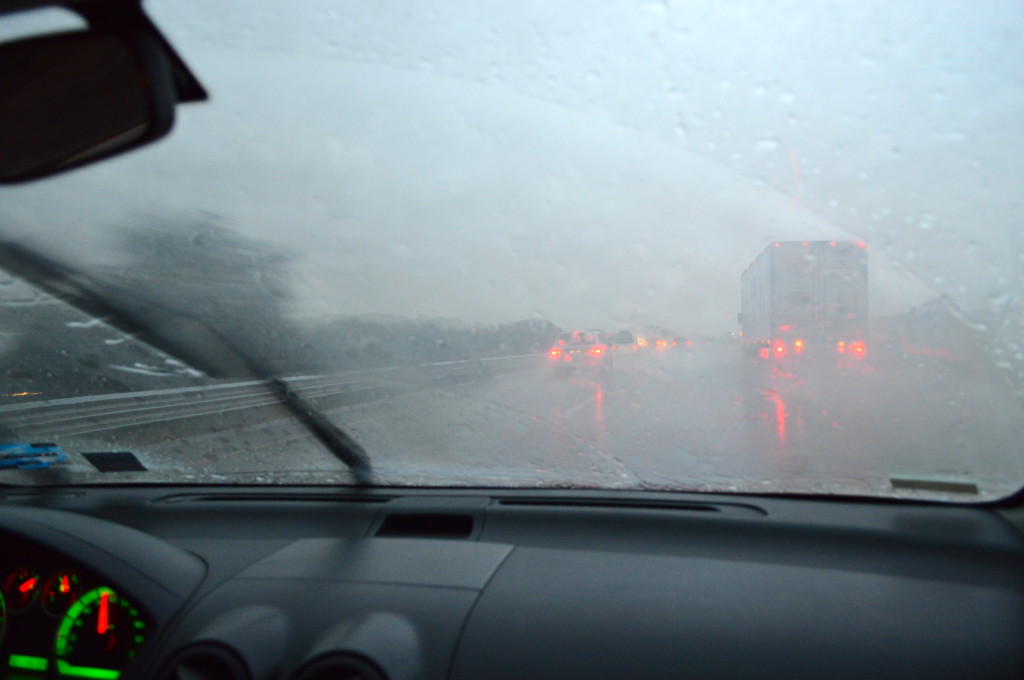 The prevailing weather we had during our road trip. The couple hour drive from Mineral del Chico to Bernal (Dec. 2013).