Go back to Madagascar page. 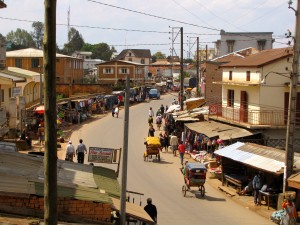 The village of Ambositra along our drive (Sept. 2011).

A set of mini-adventures on the trip over: like almost missing the connection at JFK (despite a four hour layover window…heightened security due to 9/11 anniversary?), having our ropes (carry-on set of twins) confiscated at CDG (“This! This problem!!”) and the ensuing 12-hour long stress of not knowing whether we’d actually get to do any climbing on this climbing trip. Though we had a second set of ropes in the checked luggage we were not sure if those would make it (Paris-Tana flight happens only twice weekly & should bags get delayed…). Fortunately our remaining gear got through without issues and after a two hour wait for our visas we were all merrily reunited. The final stop was the airport’s money exchange kiosk. You arrive with enough cash to last you the entire duration of your Madagascar stay (few hundred bucks), walk into the kiosk with a few bills and (an hour later, nothing happens fast) walk out with a paper bag containing a few bricks of cash. Exchange rate is on the order of 2000X, with the favorite bill being either a 5,000 or a 10,000 Ariary note. With these necessities out of the way, we were finally asleep in an airport motel (more on the place later) before 2am. 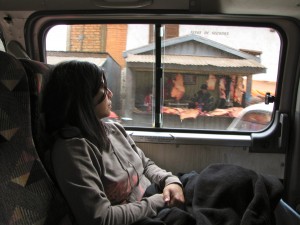 Shirley fading out somewhere on the 12 hour drive from Tana to Camp Catta (Sept. 2011).

The night was brief as we had arranged a driver to pick us up at 5am for the long drive south to Tsaranoro. Now this is a style-compromising move that was meant to save us about a day of travel time. The purist way would’ve been to go to a taxi brousse station in downtown Tana and get into a mini-van designed for 8 while transporting 24 with all the luggage piled on the roof. With our two week timeline, we figured we’d forgo this level of cultural immersion. 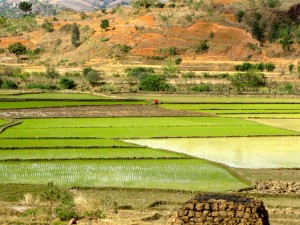 The distance between Tana and Camp Catta is probably just over 400km. With the infrastructure being what it is, the drive takes over 12 hours even with the highly spirited (I was wide awake for the entire drive – no problem) driving on the part of our “chauffeur.” The scenery along the drive was largely deforested hillsides and views dominated by rice paddies. People living in most basic of conditions. South of Fianarantsoa (final ~3 hours), scenery changes to arid plains with dramatic granite domes dotting the landscape. That evening we were enjoying some excellent cooking courtesy of the Camp Catta cafeteria & bar. 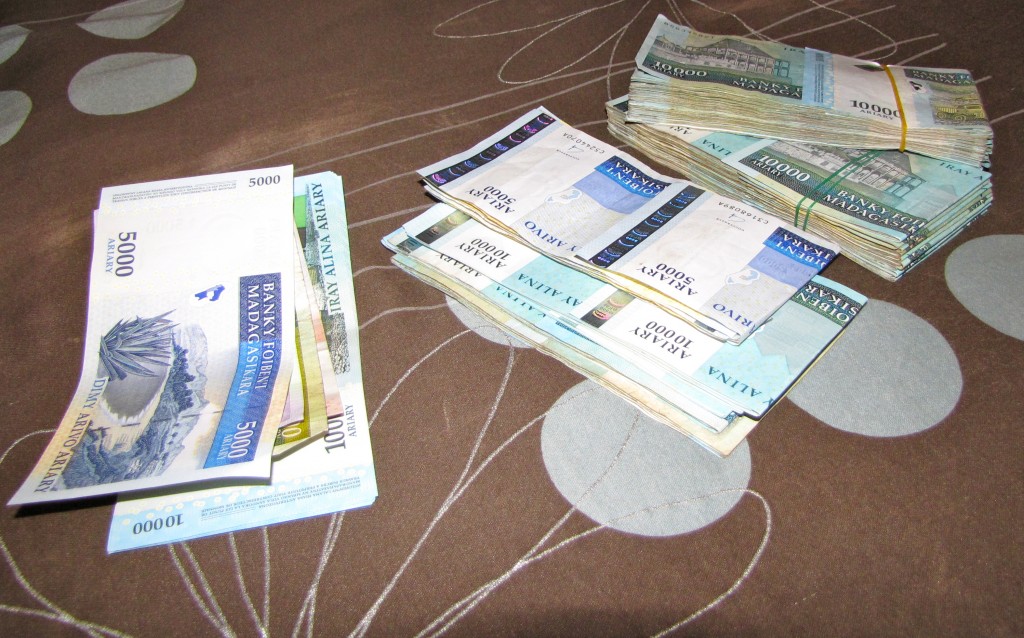 The trip begins with a trip to the cash exchange (at airport) shop where a few dollar (or Euro) bills buy you about 10lbs of local Ariary ...basically, you get enough cash to live on for the duration of your stay in Madagascar (Sept. 2011). 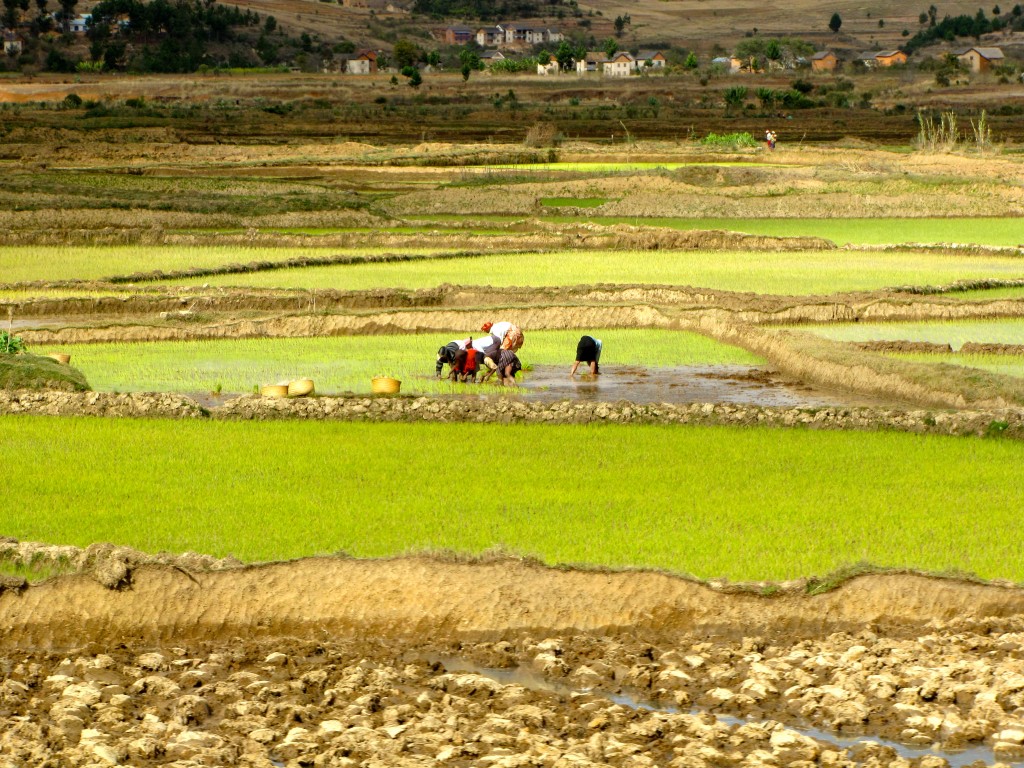 Malagasy farmers working on the rice paddies along the road (Sept. 2011). 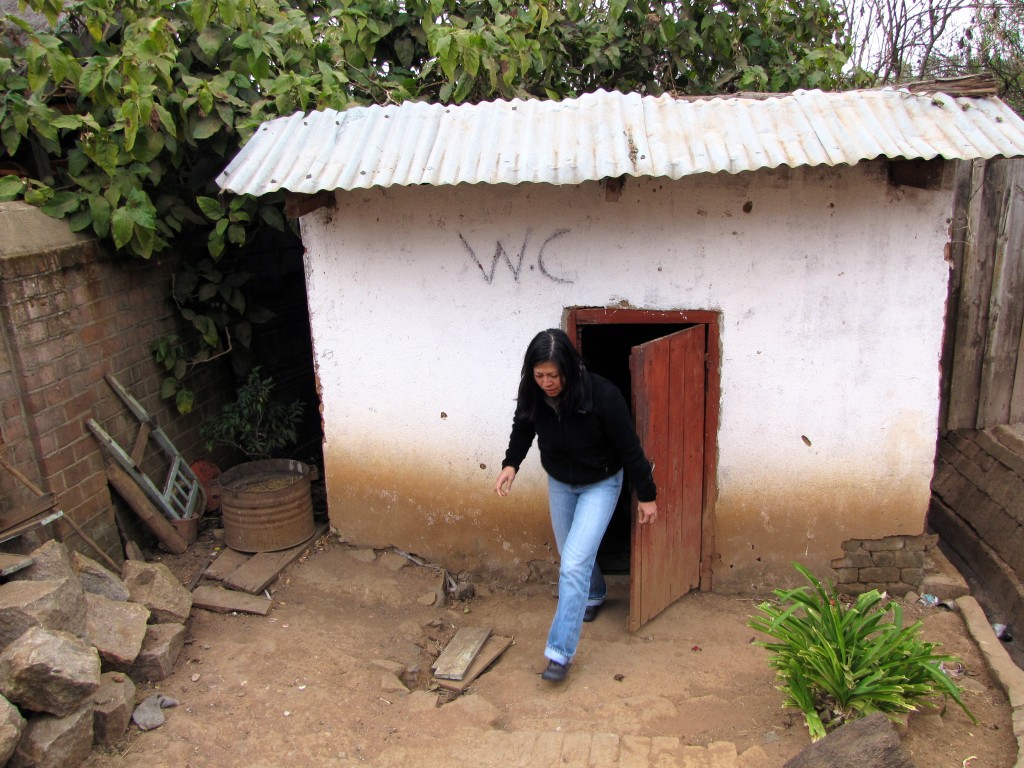 Shirley not so impressed with the roadside toilet facilities (Sept. 2011). 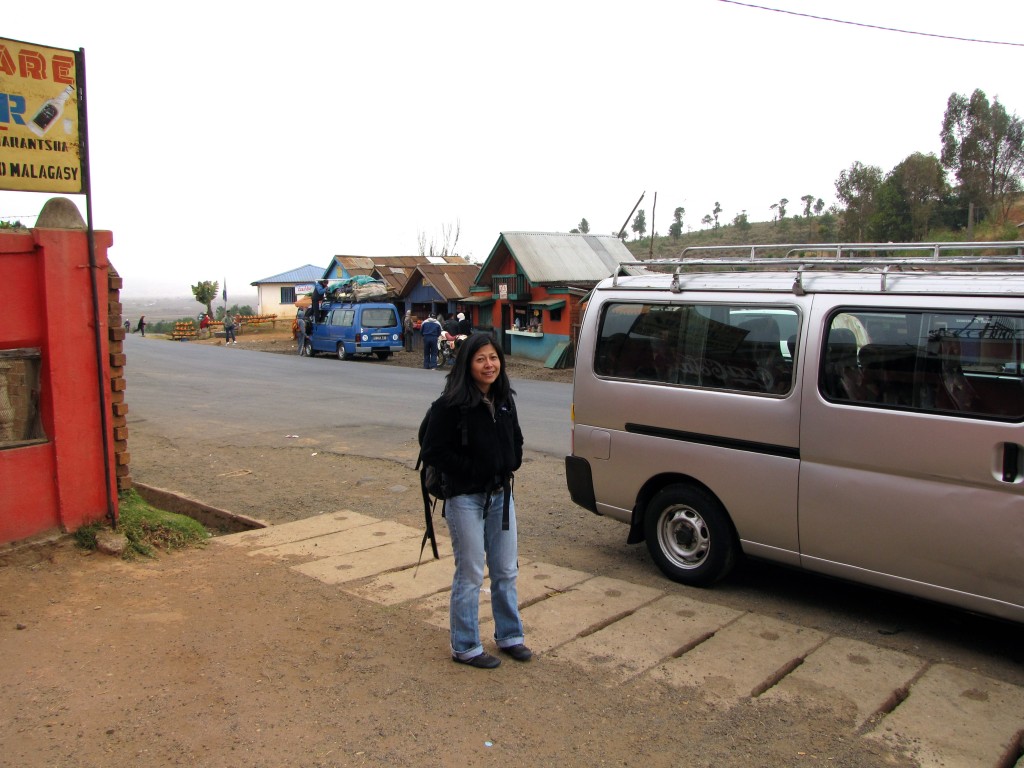 Shirley in front of our van taxi in some village. A quick stop about half way thorough the ~12ish hour drive from Antananarivo to Camp Catta (a distance of a little more than 400km; Sept. 2011). 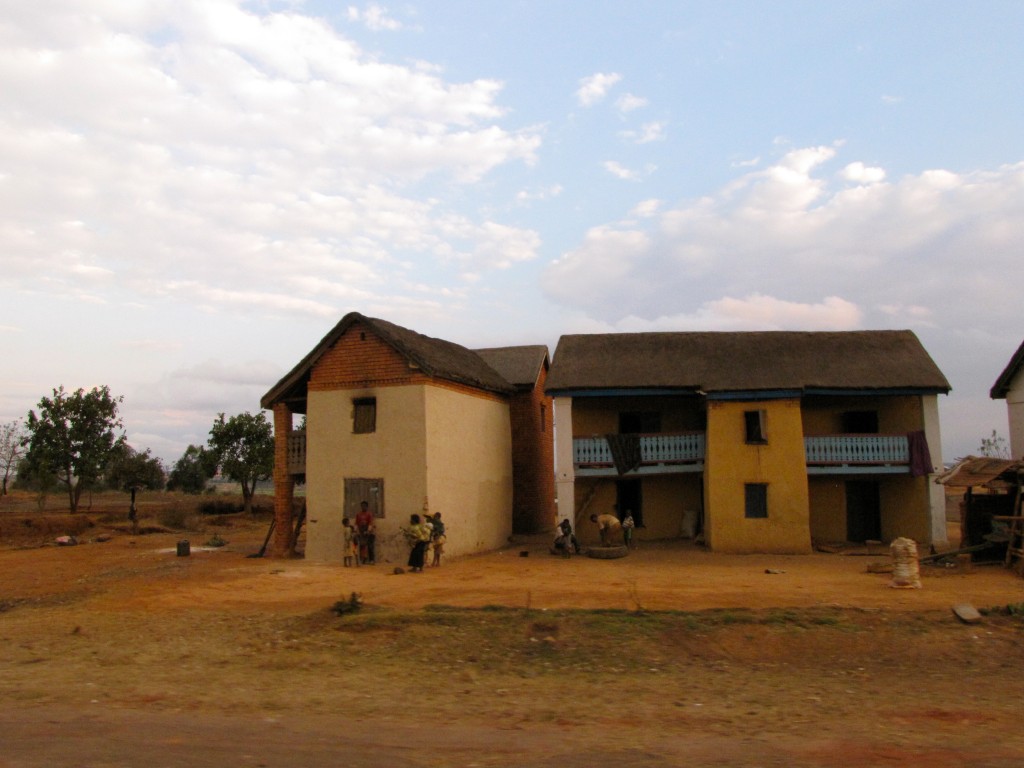 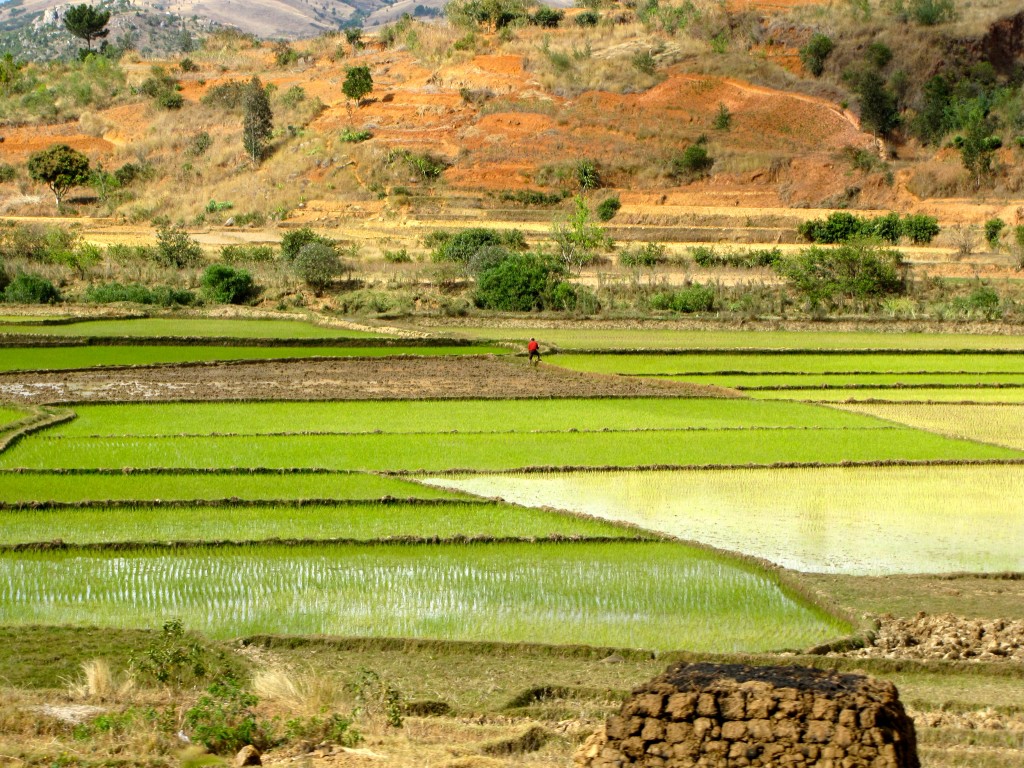 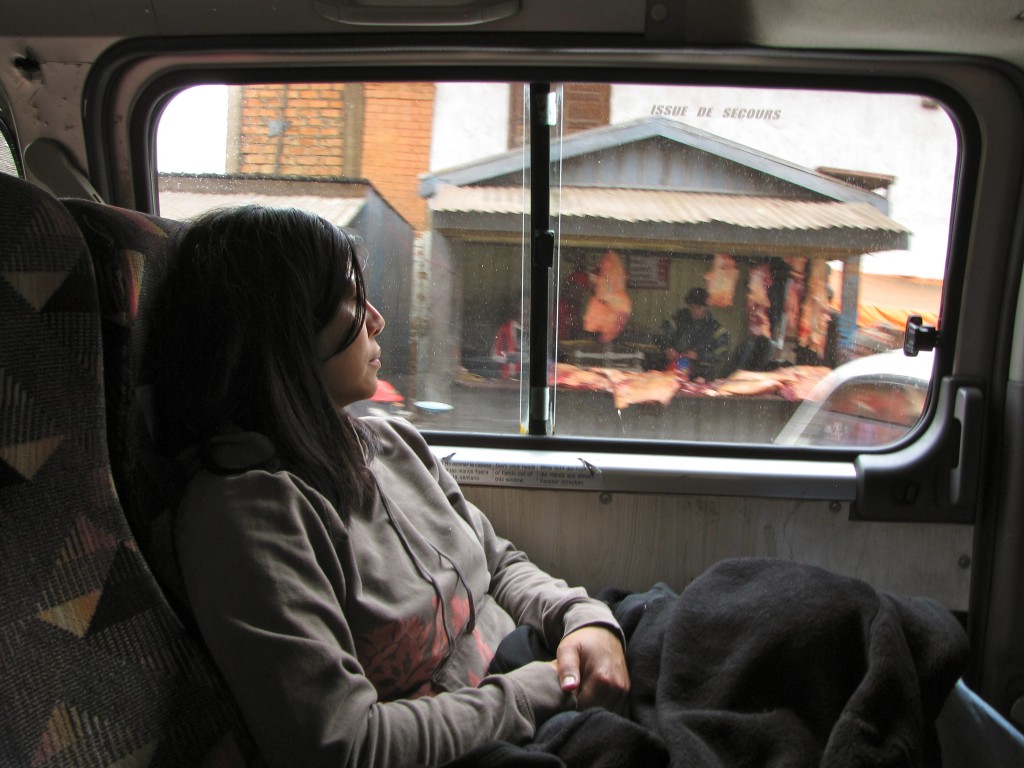 Shirley fading out somewhere on the 12 hour drive from Tana to Camp Catta (Sept. 2011). 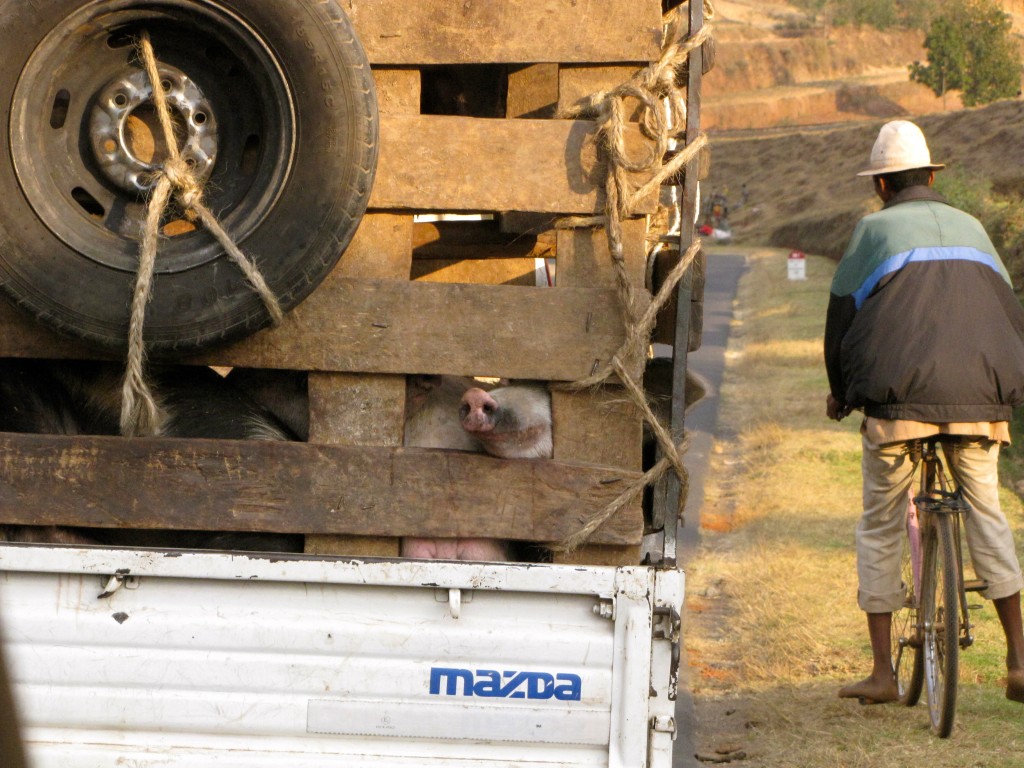 Sights along the road somewhere just south of Antananarivo (Sept. 2011). 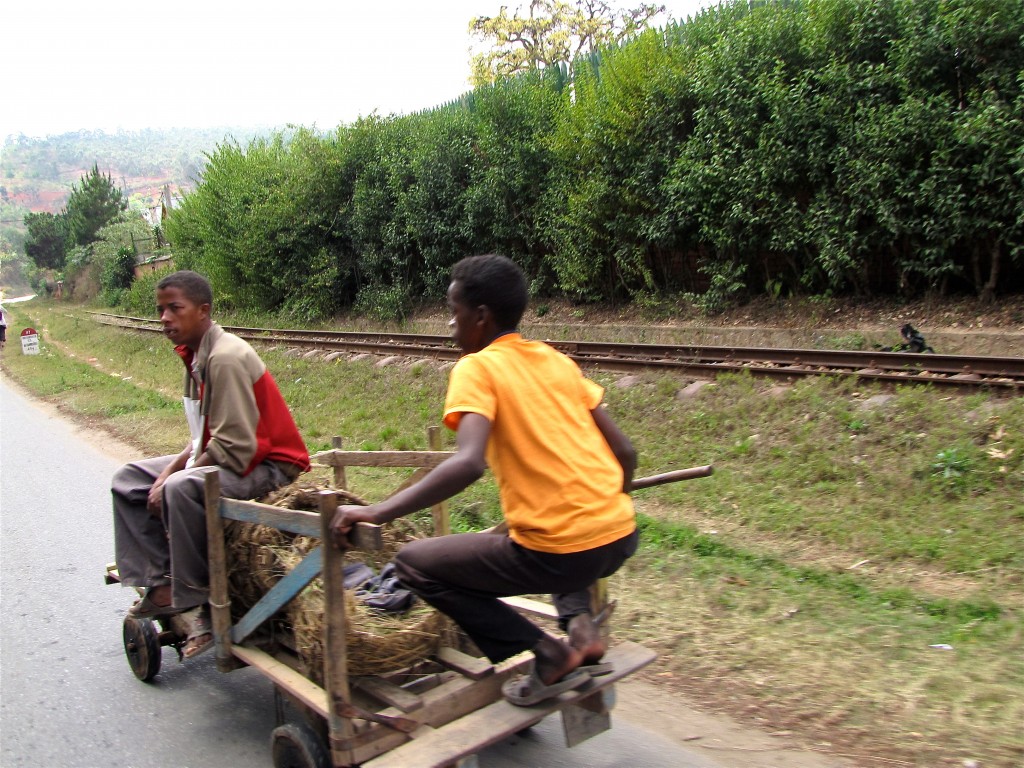 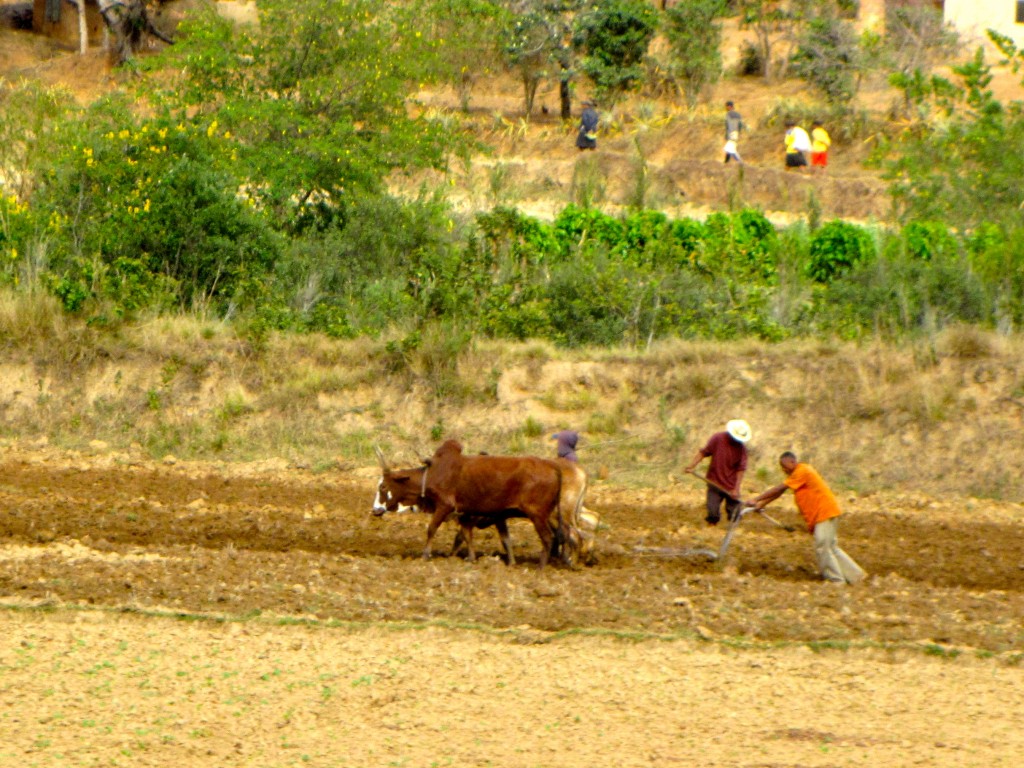 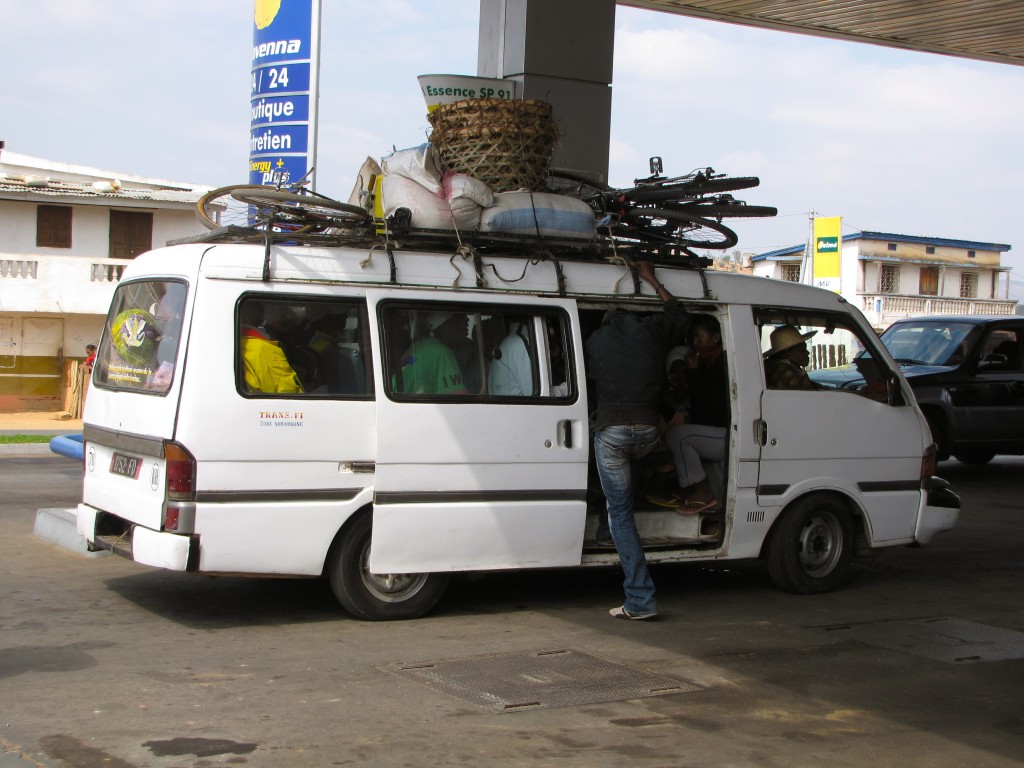 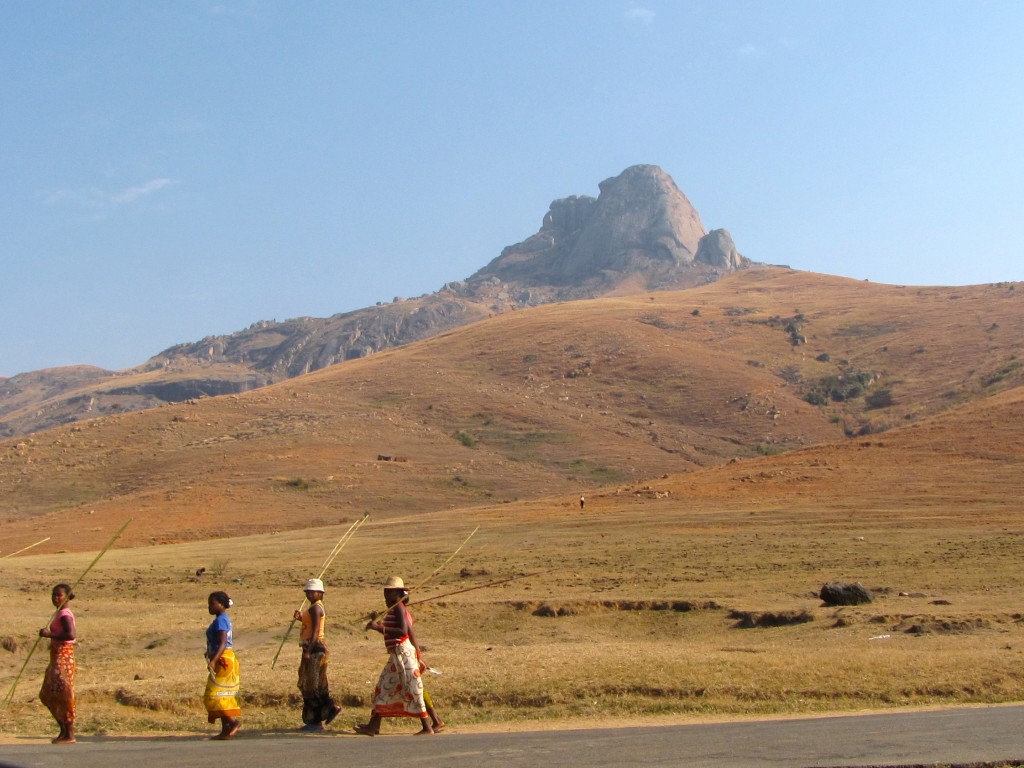 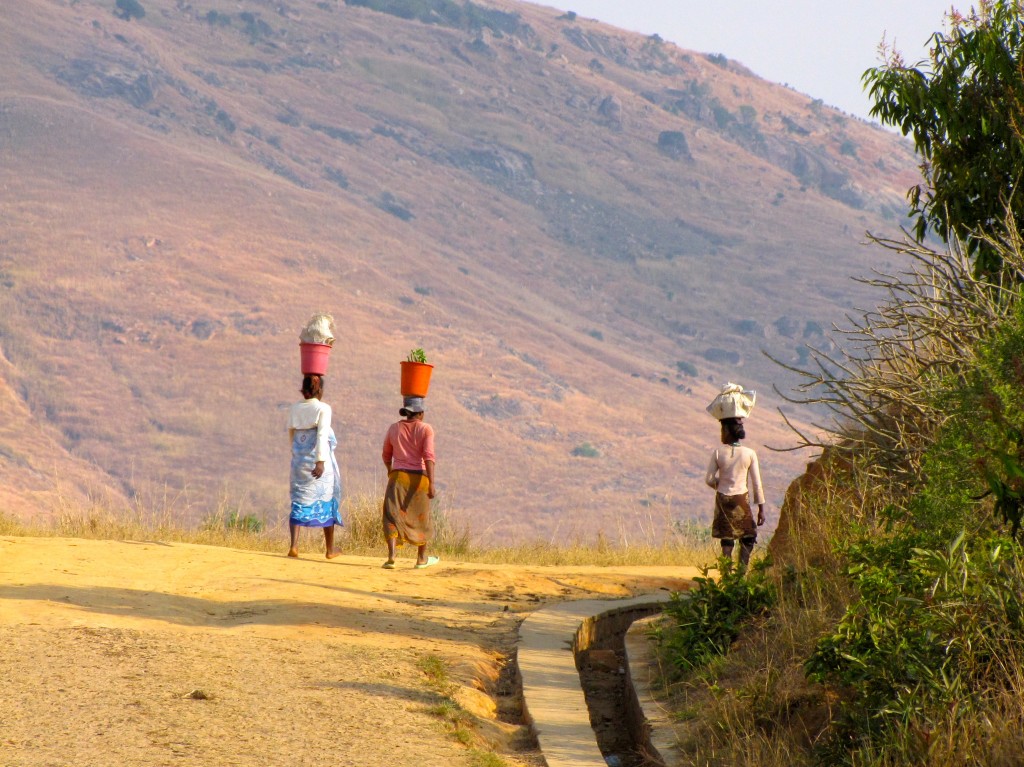 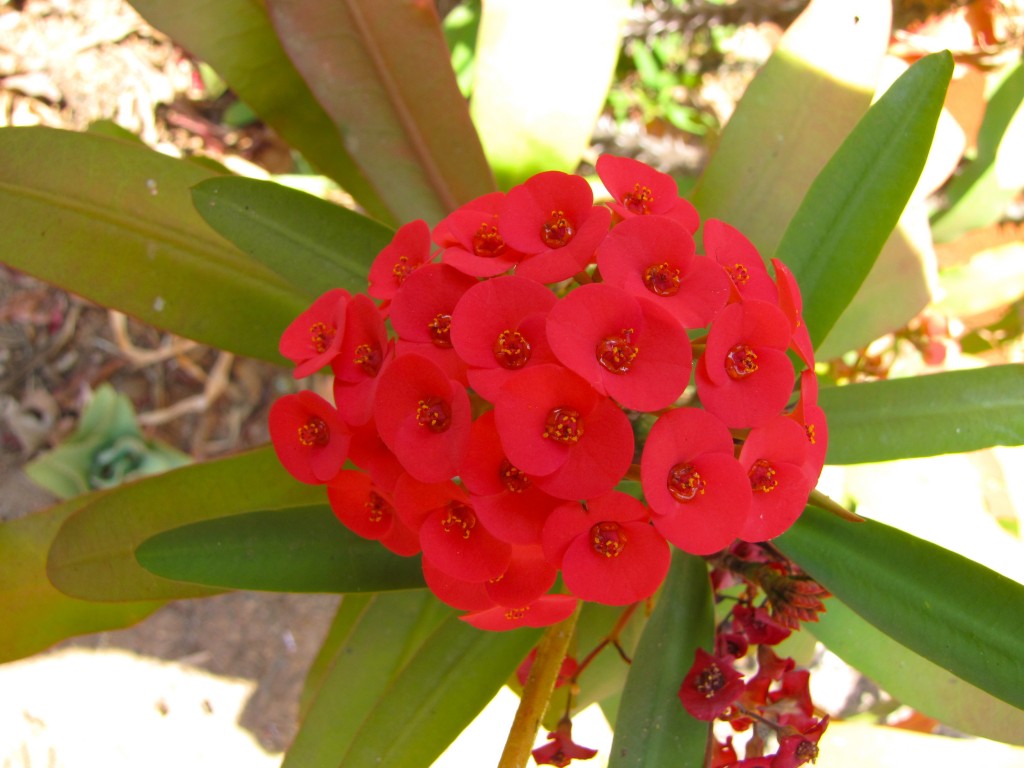 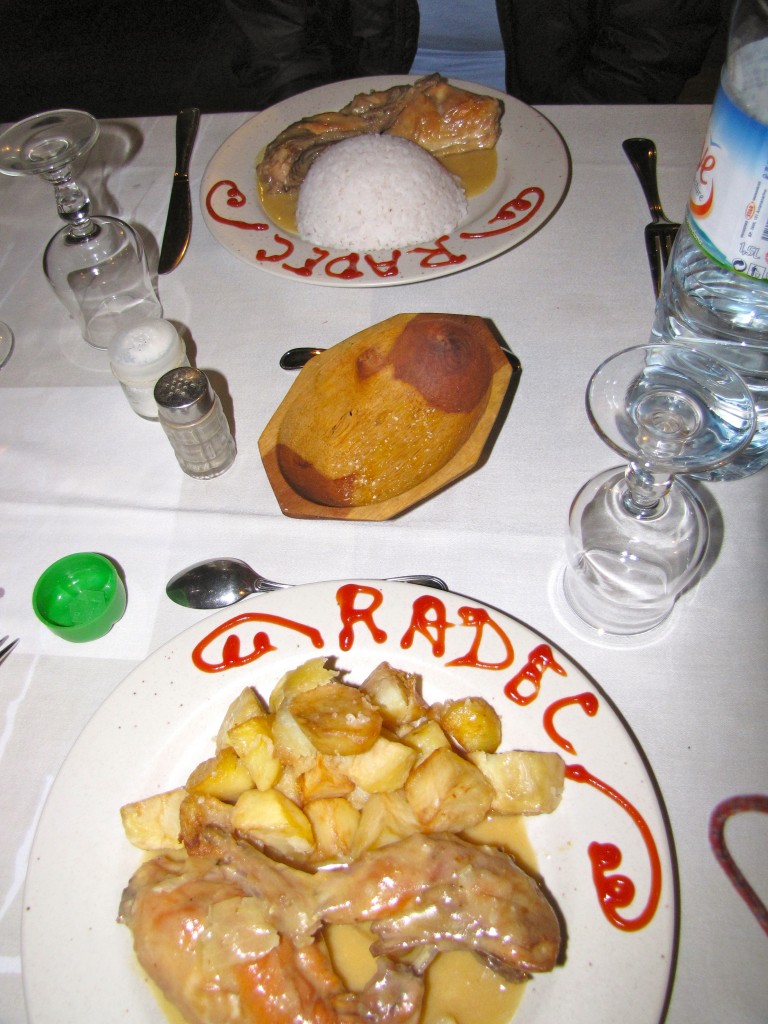 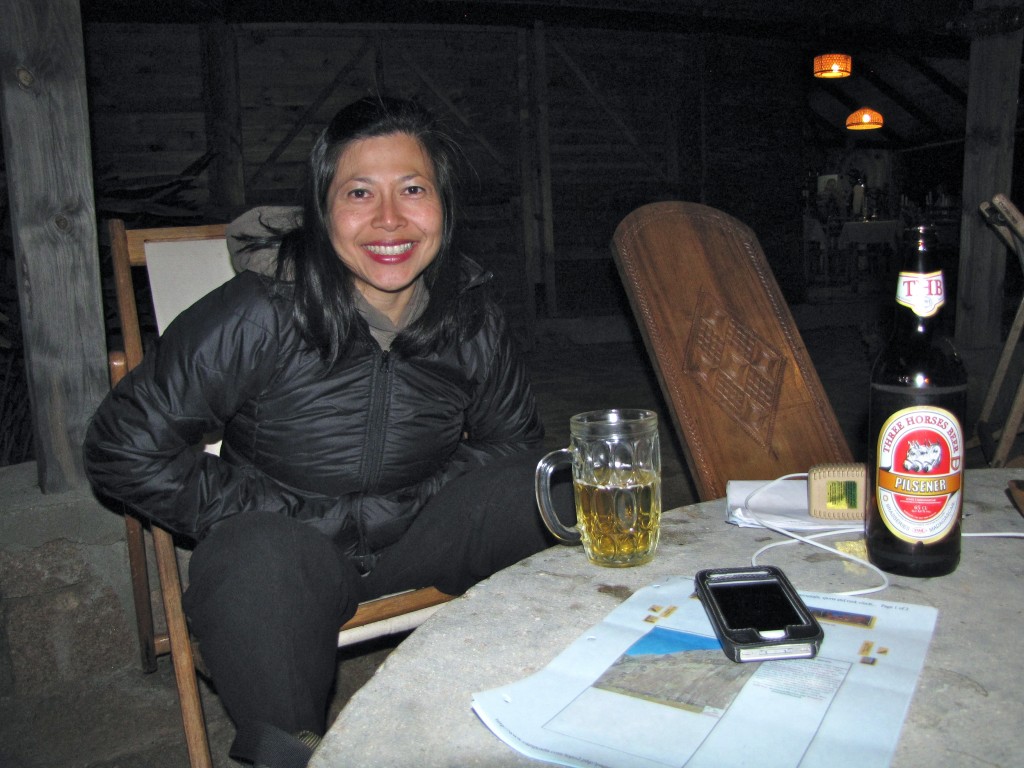 First night in Camp Catta after the long trip. We'd do much of this: sitting around & drinking the Three Horses Beer (THB....not the greatest beer but the only game in town) while occasionally glancing at the climbing topos (Sept. 2011). 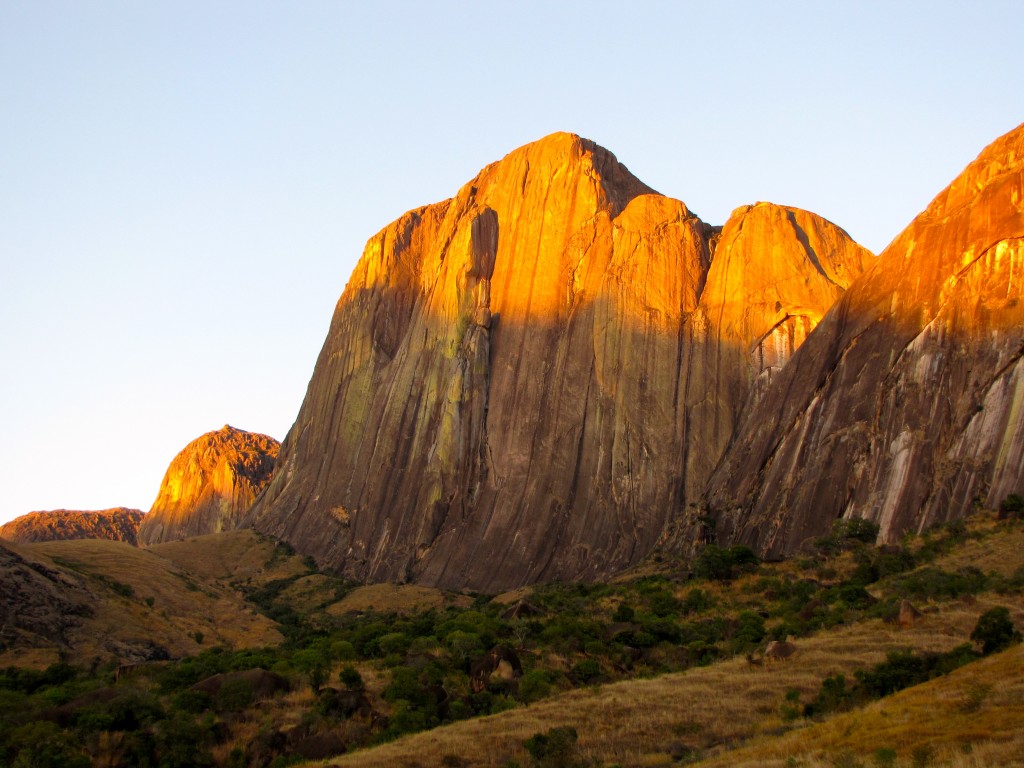 Go to Part 2.
Go back to Madagascar page.