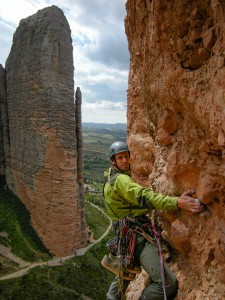 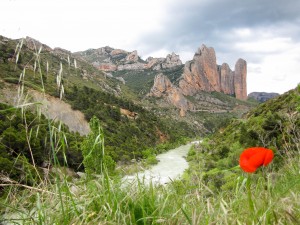 I think it was an article in Climbing magazine (…or was it Rock & Ice?) about the huge conglomerate towers and faces of Riglos, Spain some years ago that initially put this area on our radar. However, the idea was largely forgotten until I stumbled on a couple of TR’s on the web within the last year or so. Looking at the photos of the 300 meter tall formations with their unique (steep!) rock towering above a charming Aragon village got our climbing juices going. 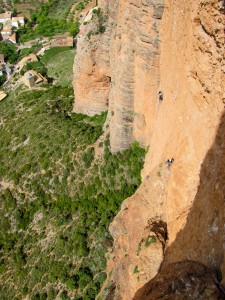 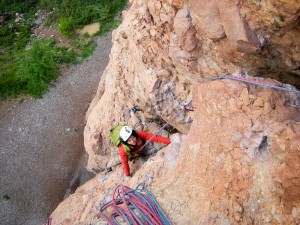 An overnight flight from Portland to Barcelona (including a layover in Atlanta) was followed by a very drowsy and seemingly never-ending (in reality, only four hours long) drive deep into the Aragon countryside. Thirty minute long bursts of driving were followed by hour-long rest area sleeping sessions. We finally arrived in Riglos on Saturday afternoon with just enough daylight to hike around and check out the starts of a couple of routes on our list. Incredible – the rock consists of “pebbles” of various sizes (ranging from thumb- to car-sized) embedded in a sandstone “concrete.” Something reminiscent of Meteora in Greece. From afar, the rock looks like chossy crap (a bit like Fisher Towers) but up close the holds seem well set in place and the established routes seem clean! With the fire stoked we went to sleep in a motel in Murillo (a nearby village) very excited at the prospect of climbing there over the coming five days. 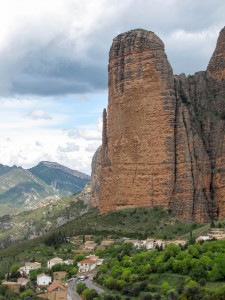 El Pison towering above the village. 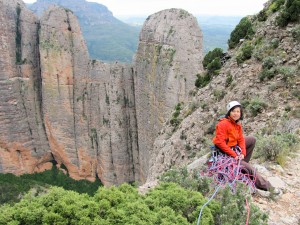 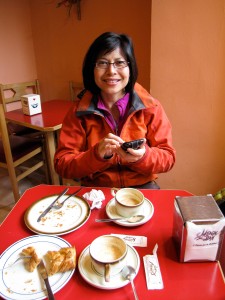 Best meal of the day in Aragon. 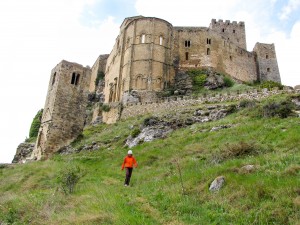 The Mallos Riglos are located in northern Spain , about a 45 minute drive west of the town of Huesca in Aragon directly above a village with a matching name. This is the foothills of the Pyrenees . Long-haul flights (as in from US) will put you in either Barcelona (closest, 4+ hour drive) or Madrid (just a tad further I think). There’s a train station in Riglos itself so it’s no doubt possible to avoid car rental (getting to/from climbs once in Riglos is trivial). 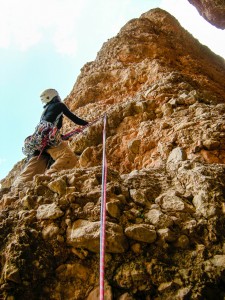 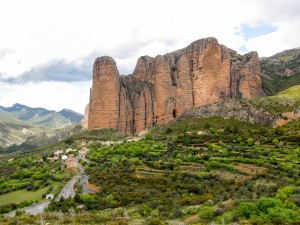 There’s a climbers’ refuge (bunk beds, 4+ per room sort of set up) in the village of Riglos . At the time of our visit, it charged about 15 Euros per person per night. The village of Murillo (~15 km away) has two hotels. The cheaper where we stayed is right on the main highway and will run you about 55 Euros per two people per night (including a skimpy breakfast). The more expensive (75 Euros per two people per night…and up) is up on the hill above the main road. Town of Ayerbe (~20 km away) has stores and restaurants. Yes, we had a lot of downtime in the shitty weather to look around.

Gear-wise we brought way too much! Next time we go, I’ll bring a single rack from yellow TCU to #2 Camalot and perhaps a nut or two. Then a ton of QD’s (18-20) and a few 48” spectra cords for tying stuff off. 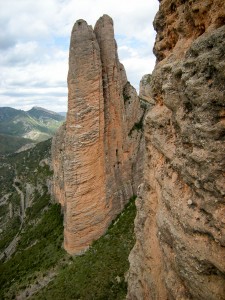 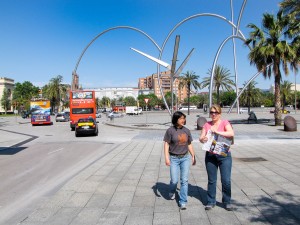 We found two guidebooks that describe climbs in the area:
Rock Climbs In The Pyrenees by Derek L. Walker (A Cicerone Guide; ISBN 1 85284 039 0). Only a small selection of older lines is included but it’s in English. 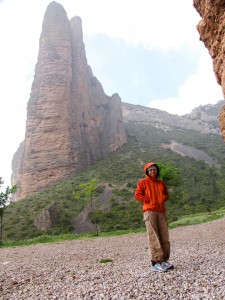 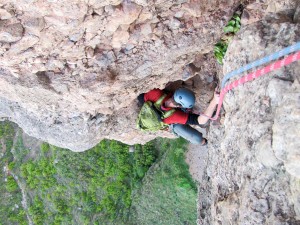 In preparing for this trip, we used Google Translate quite a bit to get some key beta. That usually produced some interesting results…here is a translated description of pitch 7 of Directa As Cimas from a Spanish online trip report…all I can say is wow, that’s some deep shit (Google Translate needs some work)!!

L7 (6c): Hell on their bellies, you could title this long. Take a long tape, because it makes a kind of zig-zag which just gives a little ass. Start out belly with webs (handsome), is easier to back another belly chokes on a long pass (well insured). You reach a point will hardly see their feet, and everything you see lisooo! Where are the skittles? Well, nothing, is sing a sharp left, shining (starts to be washed), so there is go. Long length. 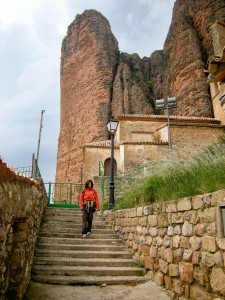 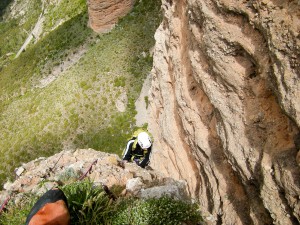 Go to Rainy Riglos 1.
Go back to Europe.