Go back to Morocco page.
Go back to Taoujdad page. 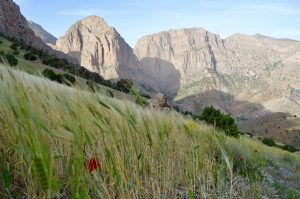 The next morning we got up early, enjoyed our last breakfast at Said’s (last good coffee in Morocco) and set off on a 12 hour trek through the High Atlas assisted by another poor donkey carrying our gear (and his owner Hamo). I woke up feeling sick that morning which was really poor timing on my part as the hike would cover some 30-40 kilometers and two 3000+ meter passes. When the altitude would let up, the heat would kick in (35 Celsius). What I had envisioned as a scenic hike – a rest day activity really – was turning into something else entirely, at least for me. Shirley seemed to be having a good time taking in the high desert and alpine scenery around us. Somewhere in the last third of this death march, some random women (nomadic Berber goat herders) in the middle of nowhere offered us some freshly cooked couscous and goat kebabs free of charge. This was explained to us as normal Berber hospitality – if you cook something that smells appetizingly, make sure you make enough to feed all those within range of the aroma. The hike finished with a 4 hour stretch in a mostly dry and very hot river canyon and was topped off with one final uphill slog before the village of Oussikis and the salvation of another comfortable gite. Here we were re-united with our Catalan friends (and one Spaniard) for an evening of eating and bs-ing. 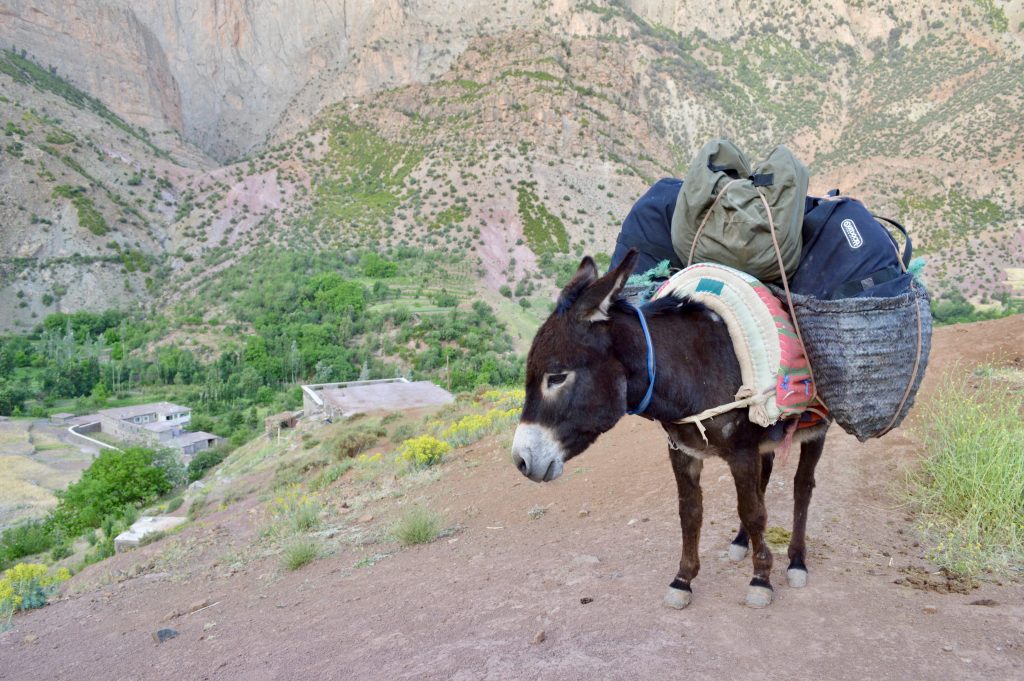 Props to the donkey! 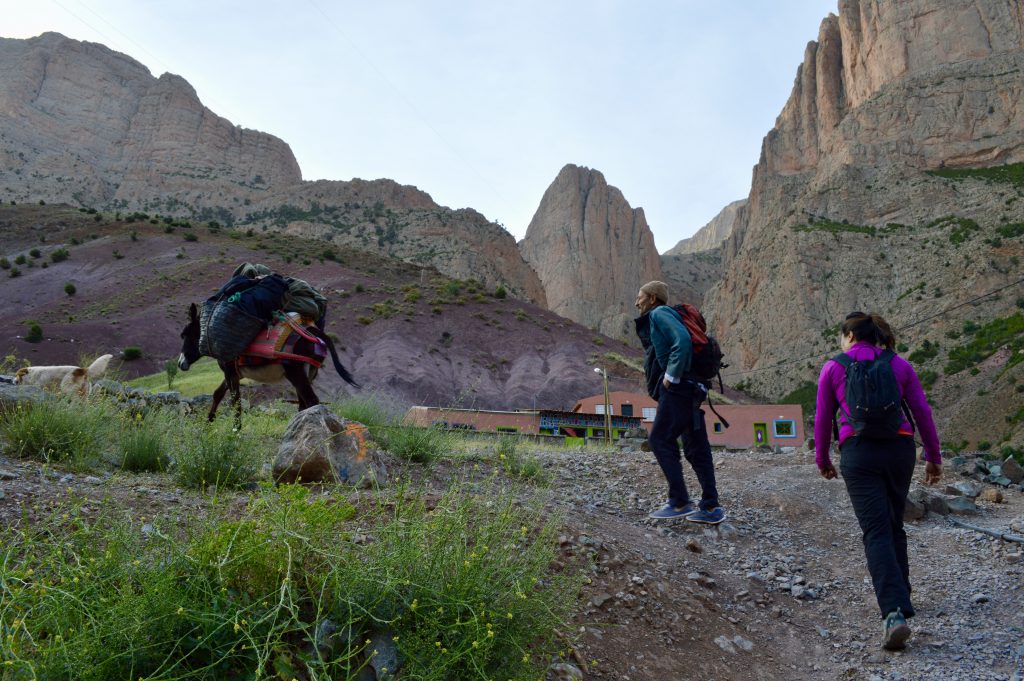 Leaving Taghia on our 12 hour cross-Atlas hike. The donkey in the lead, followed by his owner Hamo, and Shirley (May 2017). 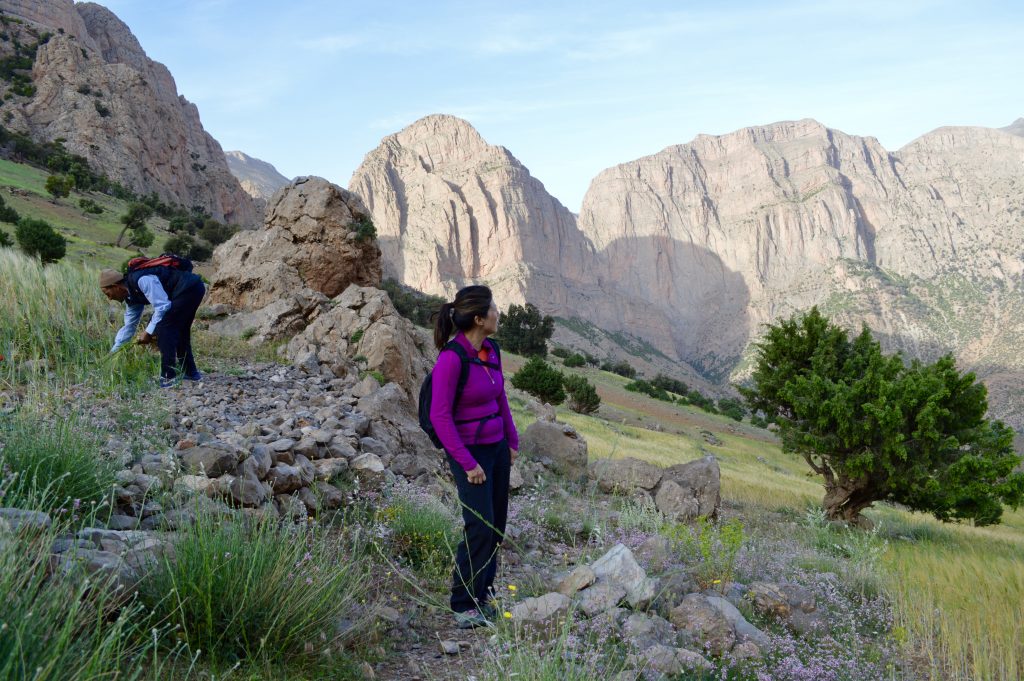 Early on in the hike. Hamo is picking up a light snack for the heroic donkey (May 2017). 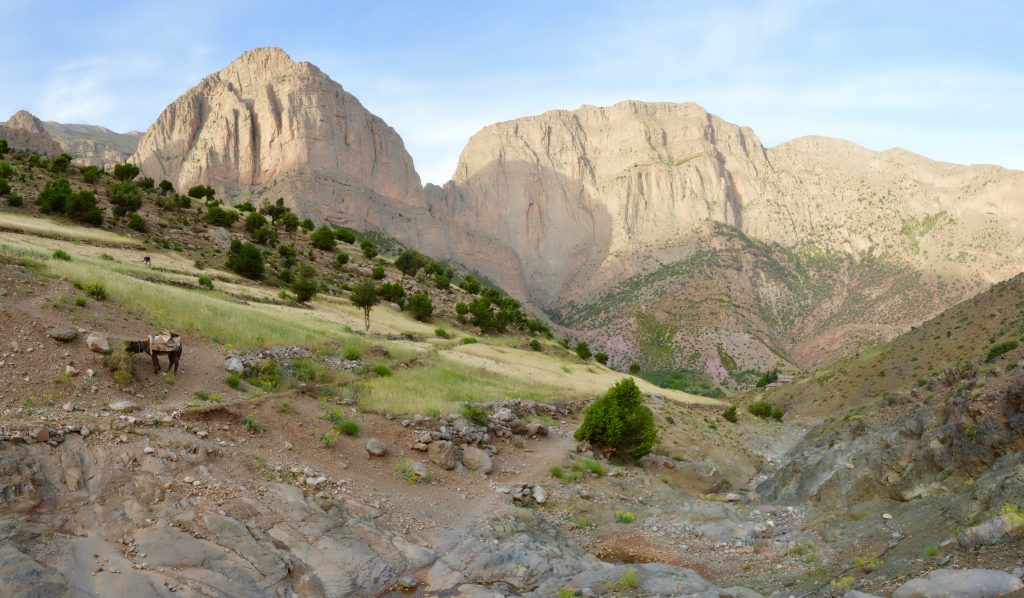 Our hard-working donkey is having a quick breakfast some 30 minutes above Taghia (May 2017). 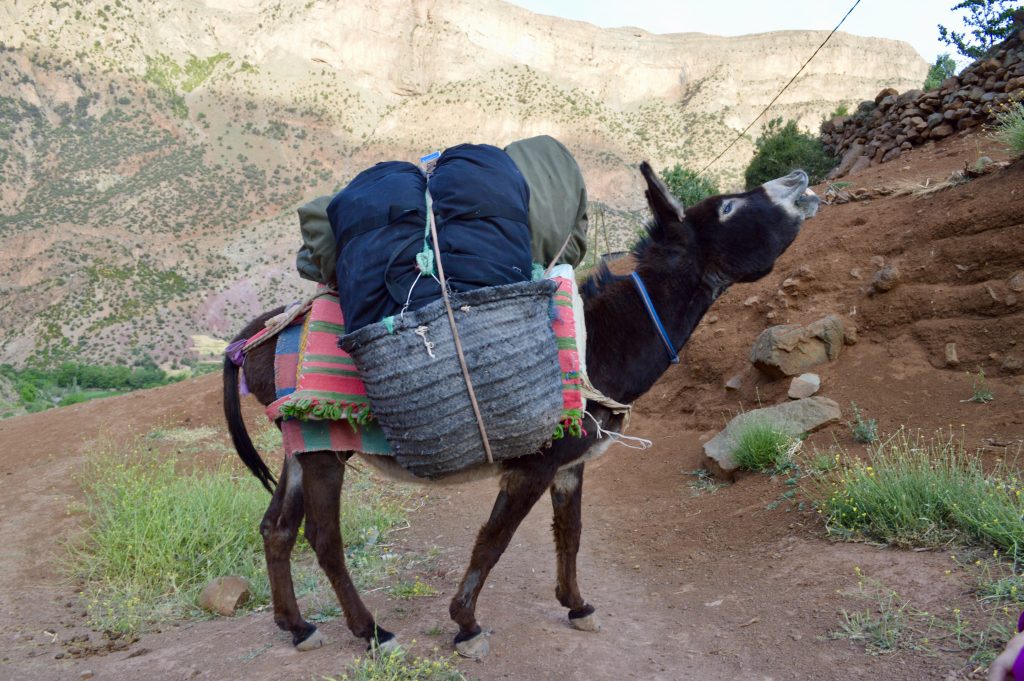 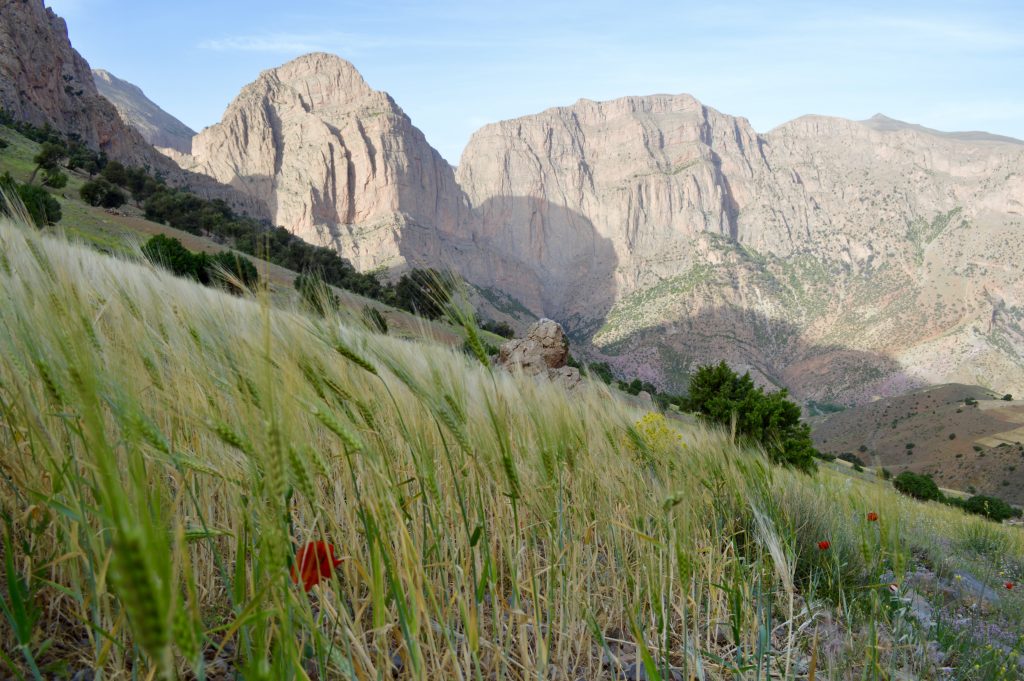 Poppies, wheat fields and the formations above Taghia (May 2017). 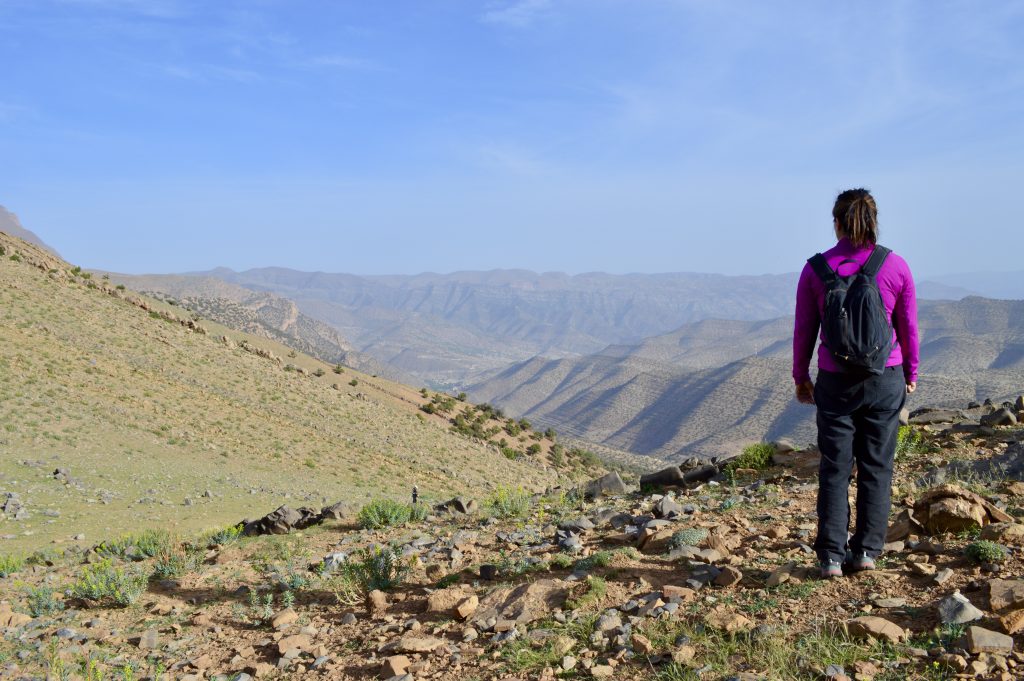 Looking back towards the village of Zaouia Ahansal …not our destination (May 2017). 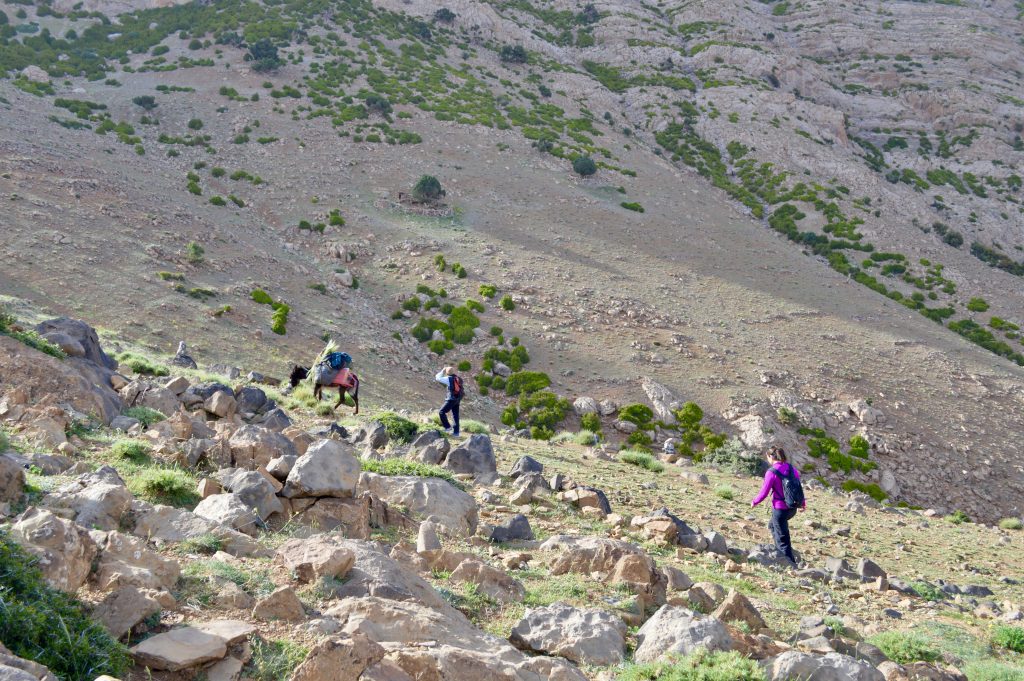 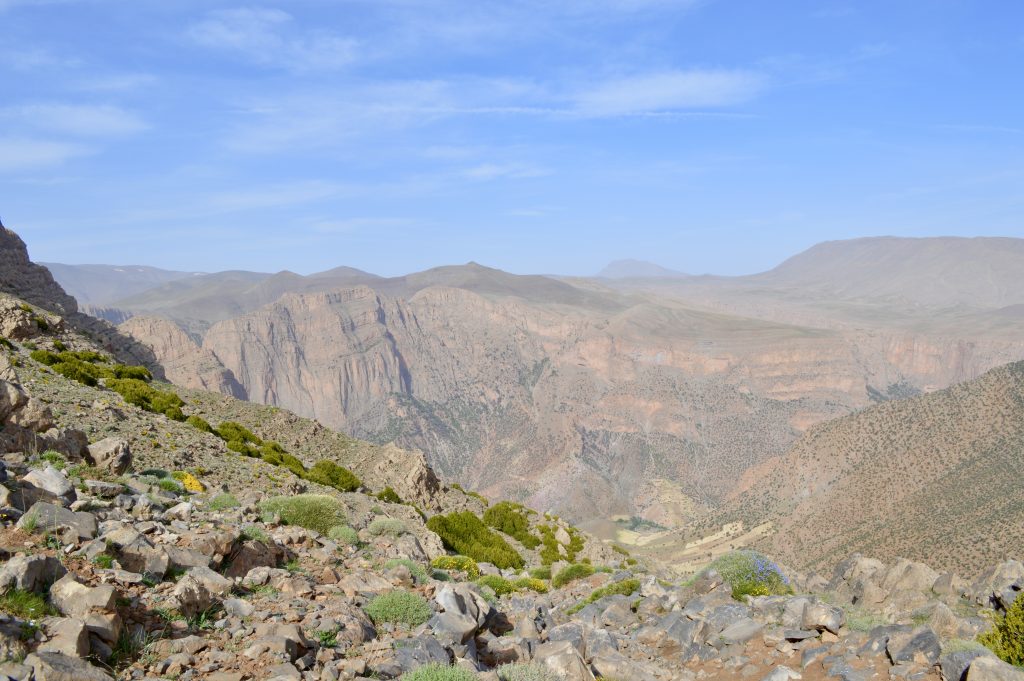 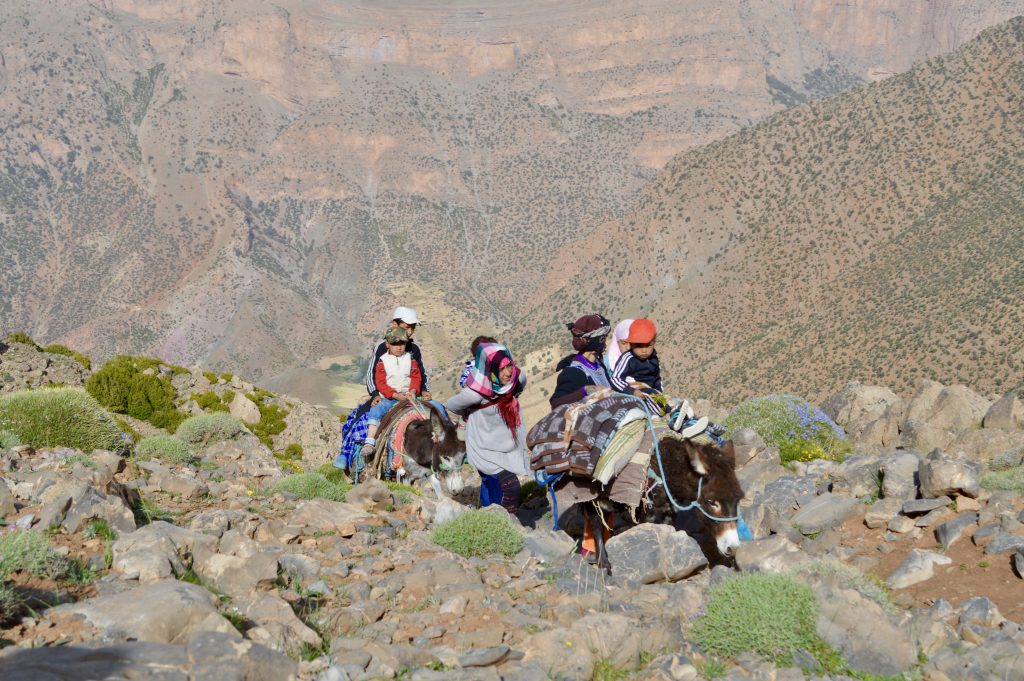 Some women and children undertaking a mountain crossing journey of their own – different villages though (May 2017). 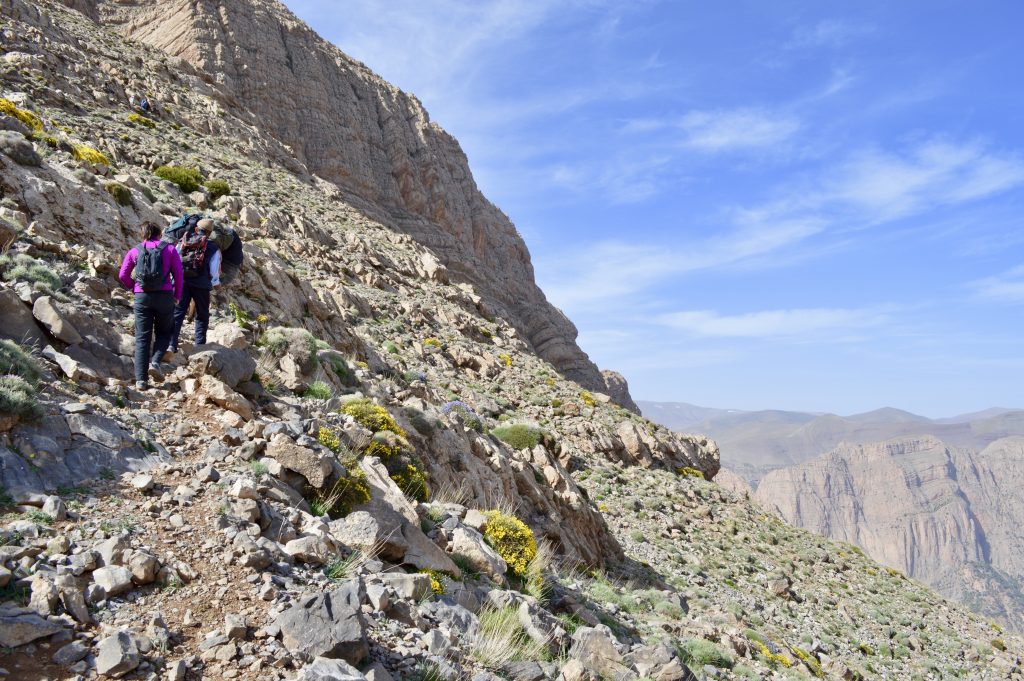 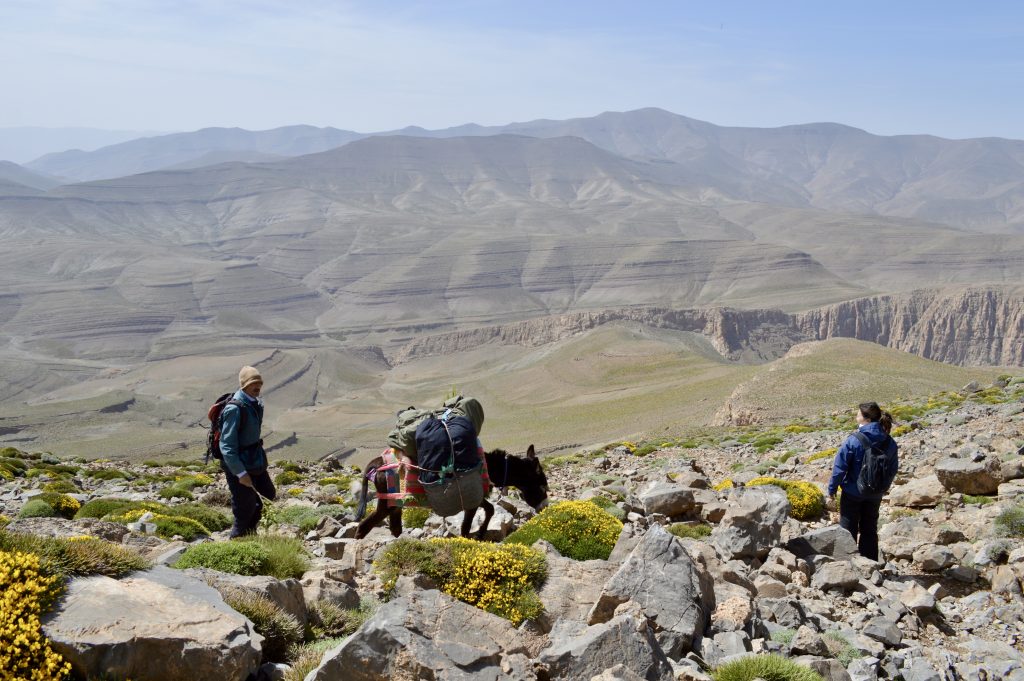 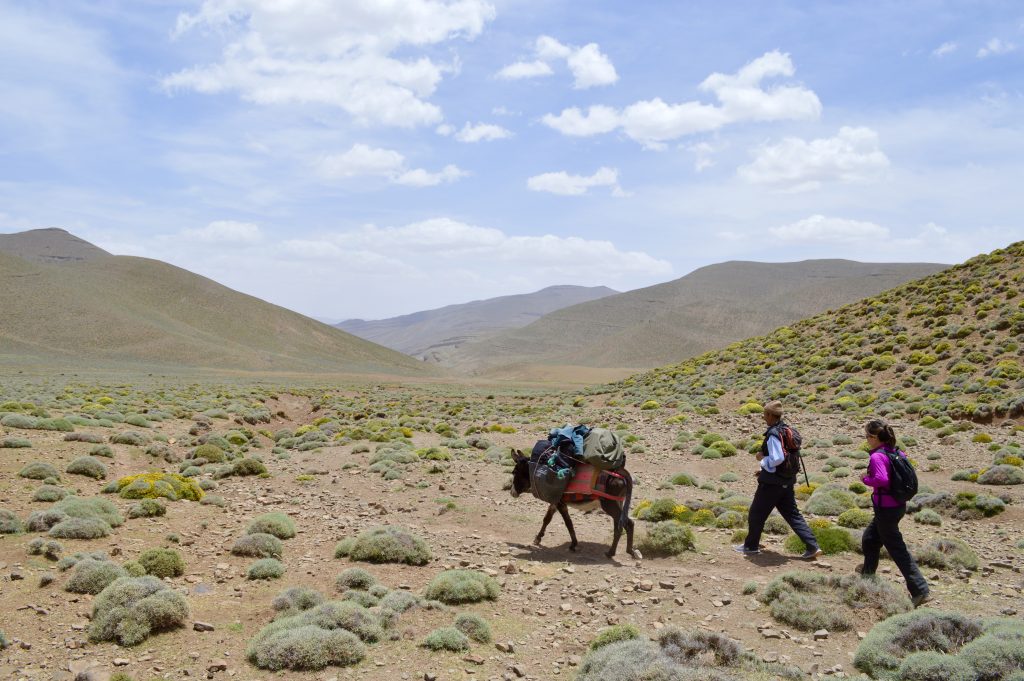 After the second pass, and endless descent begins; 4-5 hours to go.  Initially through this open plain and later through an endless and hot canyon (May 2017). 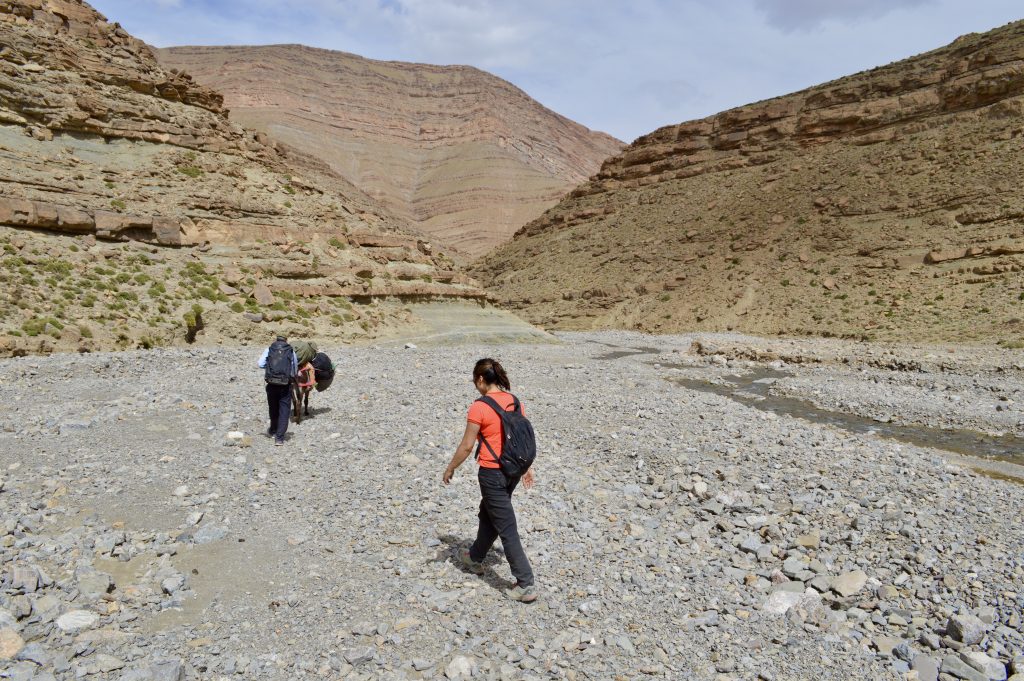 The never-ending river canyon (did I mention it was hot!?).  We’d sort of get into this cycle where we’d think that the village would magically appear just beyond the next bend and have our snowflake feelings crushed over and over (May 2017). 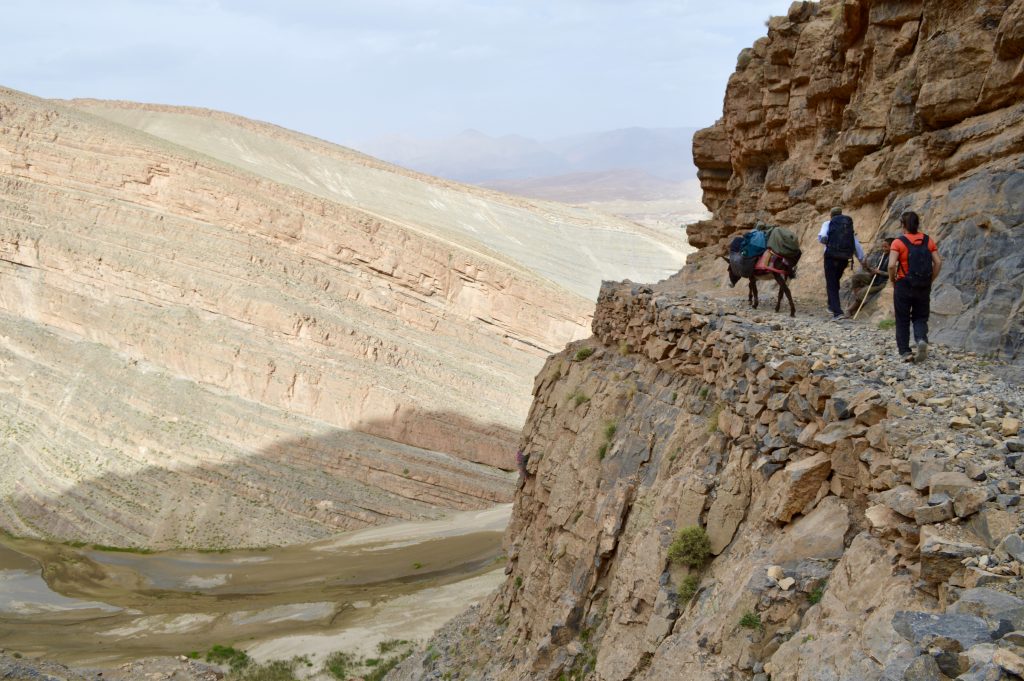 After 11 hours, turned out we still had another climb left before reaching the village of Oussikis (May 2017). 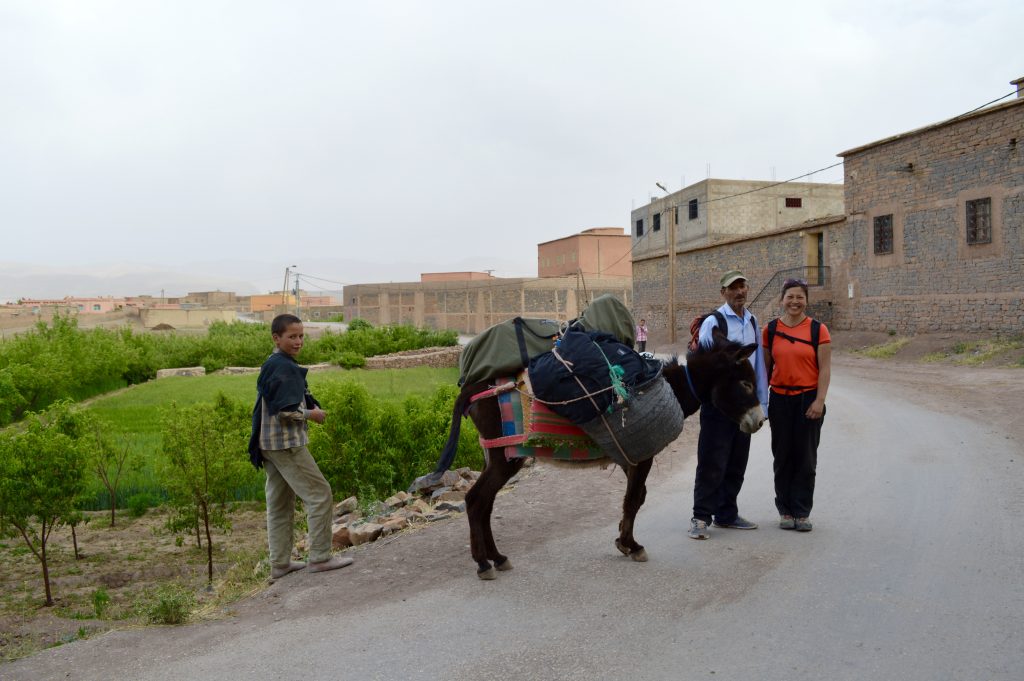 Alhamdulillah!! After 12 hours (12 painful fucking hours for me), we finally reached the village of Oussikis (May 2017). 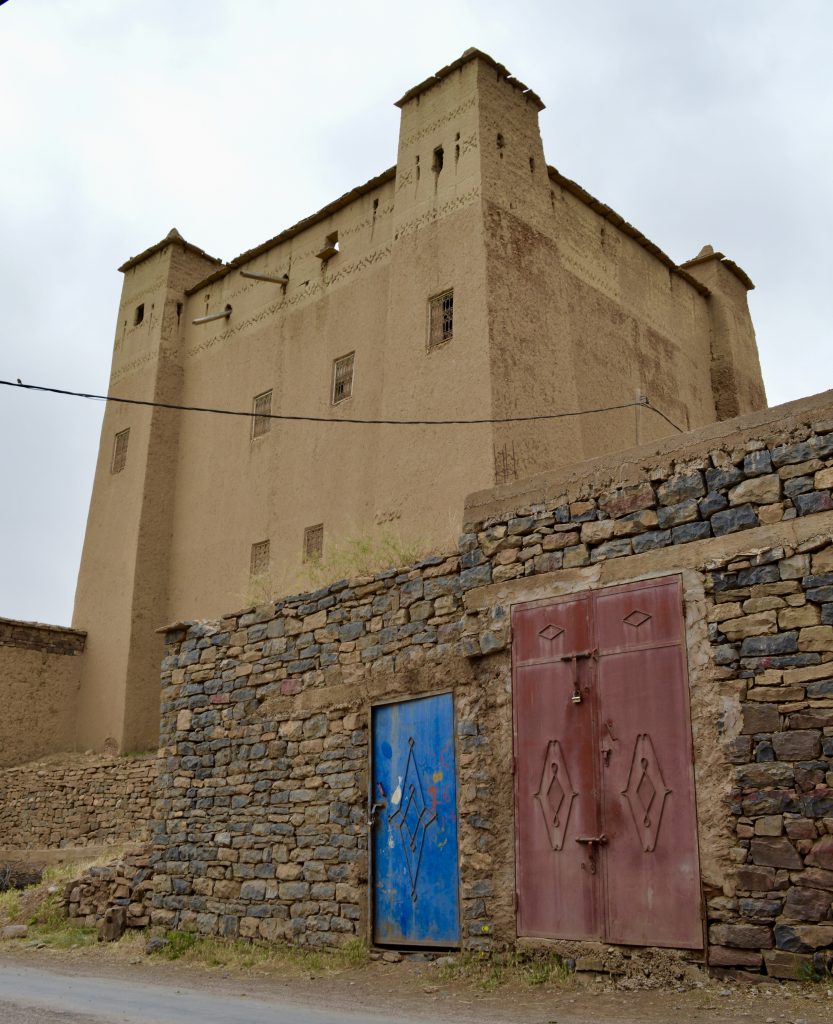 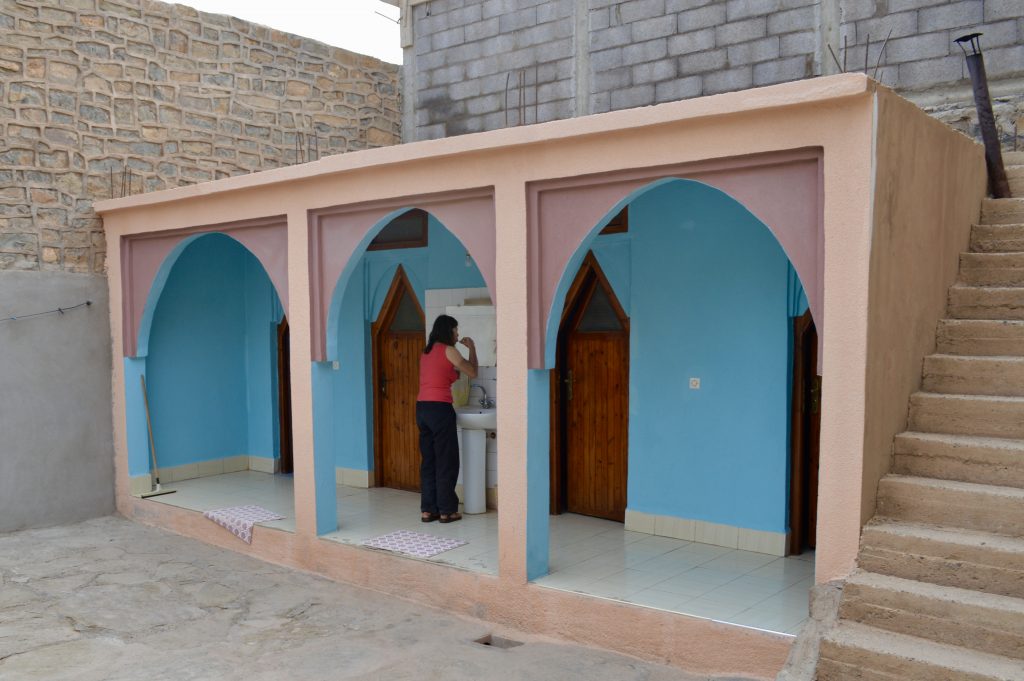 The very comfortable and charming gite in the village of Oussikis.  Here, 12 hours of sleep would fix me up (May 2017). 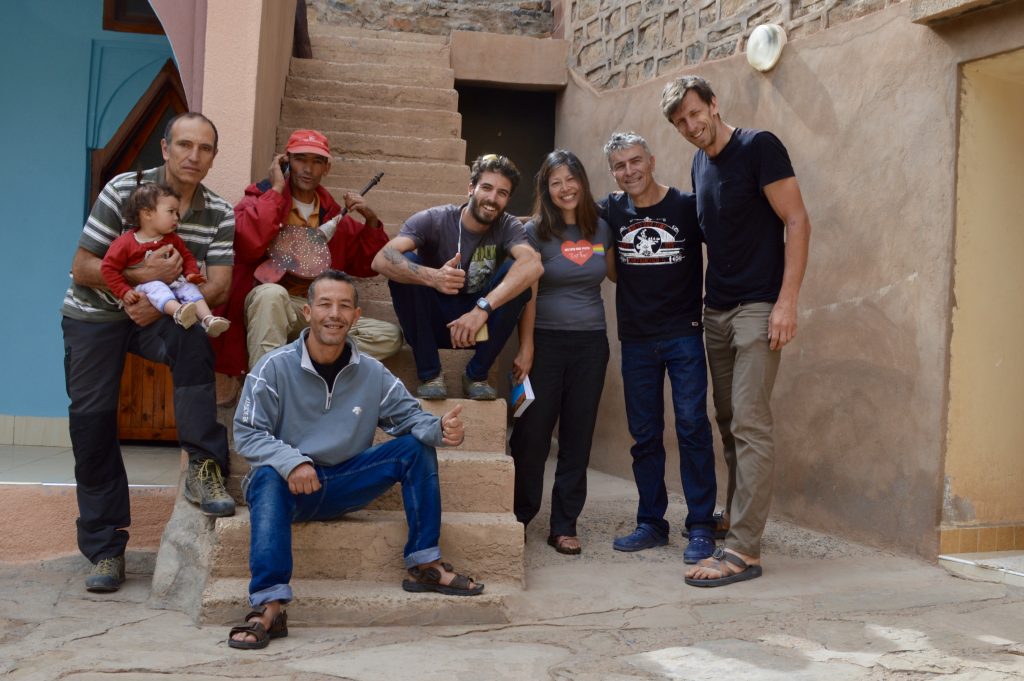 The crew at the gite in Oussikis. Left to right: Rafa (Catalonia), Lassen (lower on stairs), Said (not the same person as in Taghia), Carlos (Spain), Shirley, Ferran (Catalonia) and yours truly (May 2017).

Go to Todra page.
Go back to Morocco page.