Go back to Oman page.
Go back to Jebel Misht page. 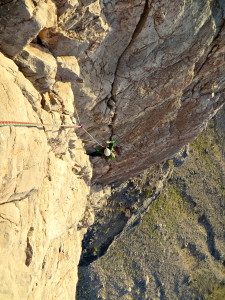 The Foord-Kelcey online topo has a short, intro paragraph on “Why should you want to do the French Pillar”? The selling points of:

a stunning line, a desert hybrid of the Walker Spur of the Grandes Jorasses and The Nose of El Capitan; both climbs of similar scale… remains a mostly-untrodden – and BIG – adventure

…certainly worked on us a year earlier and here we were. This ~1000 meter 1979 route consists of three distinct sections of roughly equal length: the opening steep pitches; followed by a long, mostly easy ridge (third class to up to 5.8 higher up); and the steep headwall where more difficult climbing is found as well as the route finding cruxes. Pitch two, rated British E3 5c, is reported as heady and difficult. In fact it is this pitch that had us doing all the stupid gym wanking over the last few months in preparation. The line meanders enough so that bailing from above pitch three is not really in the cards. Those facts hung heavily on us during the pre-dawn approach hike. 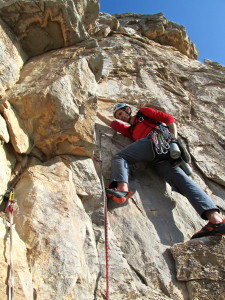 We made the base by 6am and were climbing at first light some 30 minutes later. The first pitch looked loose but was in fact straightforward and on mostly solid rock. Despite what we saw in some online photos, a direct, diagonal crack line leading to the main dihedral of the pitch was a friendly and well protected way to go and with hardly any rope drag. The highlight of the pitch was Shirley intentionally trundling a loose 50-pound block from near the top of the pitch – community service. Next came the mentally taxing pitch 2: a short traverse along the ledge followed by thin and somewhat runout face climbing. The first (old-ish) bolt is at about 10 meters above the ledge but there is pretty good gear to be had before. I broke this 60 meter pitch into two with a midpoint (fixed) belay. The upper part of the pitch (reportedly the crux of the entire route) was easier – chimneying and pulling around large, hollow-sounding flakes. Having done the reported crux, a much lighter mood came over us as we continued up on easier terrain. At some point that morning, Shirley’s cell phone rang – a work related call. We found that pretty surreal and funny (and of course ignored it). Above the topo’s pitch three, we did a bit of rope stretching pitches but no real sustained simul-climbing. The virgin, golden colored limestone was replete with sharp, rope-catching flakes that made sustained simul-climbing a pain in the ass. We passed the old food cache from the original ascent and continued up the steepening and progressively more spectacular ridge. 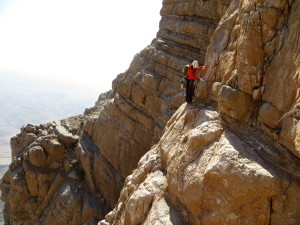 Traverse to the headwall.

I think we started traversing the ledge systems below the final headwall around1pm. Easy going but more pain in the ass rope drag. The bottom portion of this headwall has many ledges and pretty easy climbing. At around 3pm we found ourselves on a spacious ledge with ample dry wood. We were at a decision point. There were about 6 or 7 pitches left with some difficult climbing and difficult-sounding route finding. The upper part of the headwall is vertical to overhanging in places. We thought we might be able to finish the line if we had no major route finding screw ups…on the other hand, we might end up spending a night at some shitty semi hanging stance. We made a decision to bivy where we were. Did a bit of belayed firewood gathering from nearby ledges and were nicely settled in under our one light sleeping bag by the time the muezzin in the village below started his afternoon call to prayer. We had a nalgene and a half of water, a small can of hummus and a few slices of pita bread. The low water reserves and some dark clouds weighed on us a bit but we managed to get some sleep. 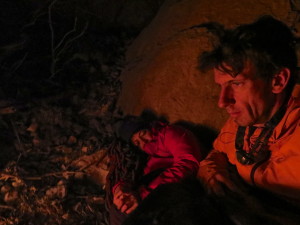 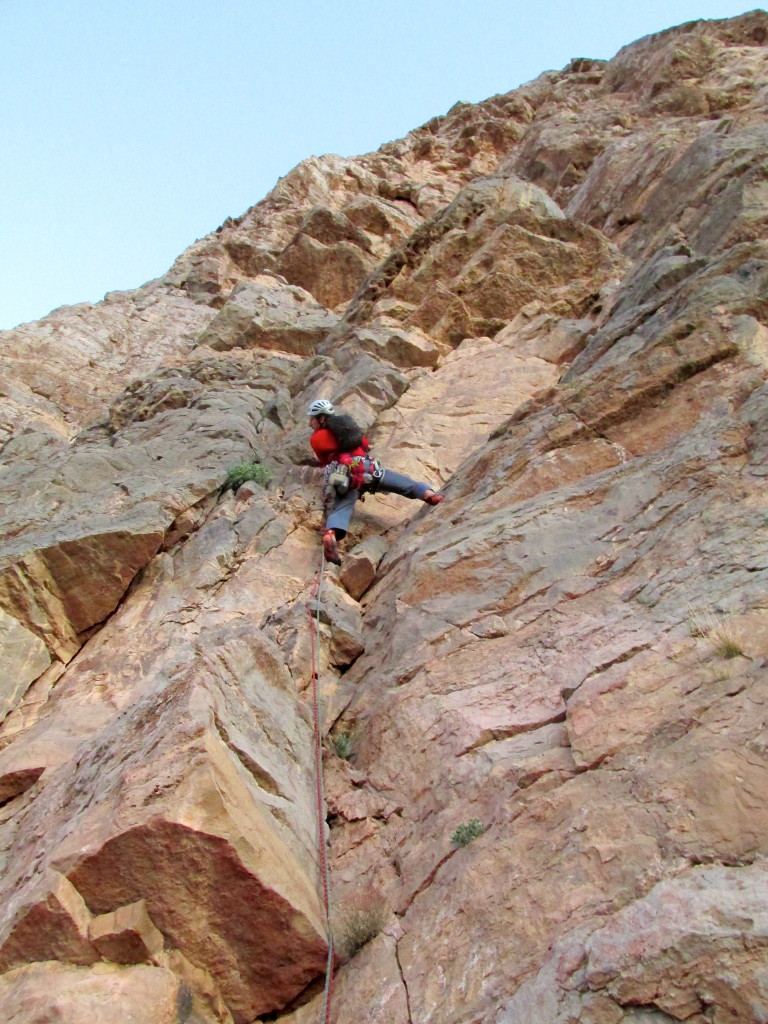 Pitch 1 of the The French Pillar in the early morning light. Looked loose from below but has seen enough traffic to be mostly clean and is well protected (…except for a 50 lb loose block near the top that that we airmailed to the talus below). 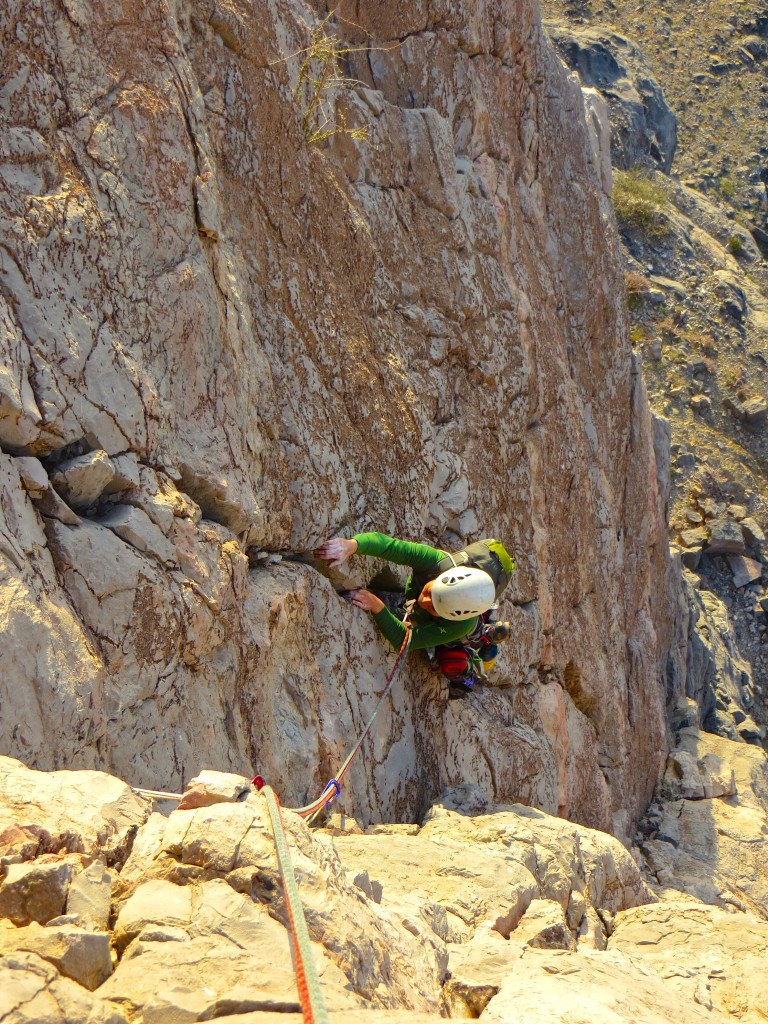 Well protected and fun crack climbing of pitch 1 of The French Pillar (Feb. 2014). 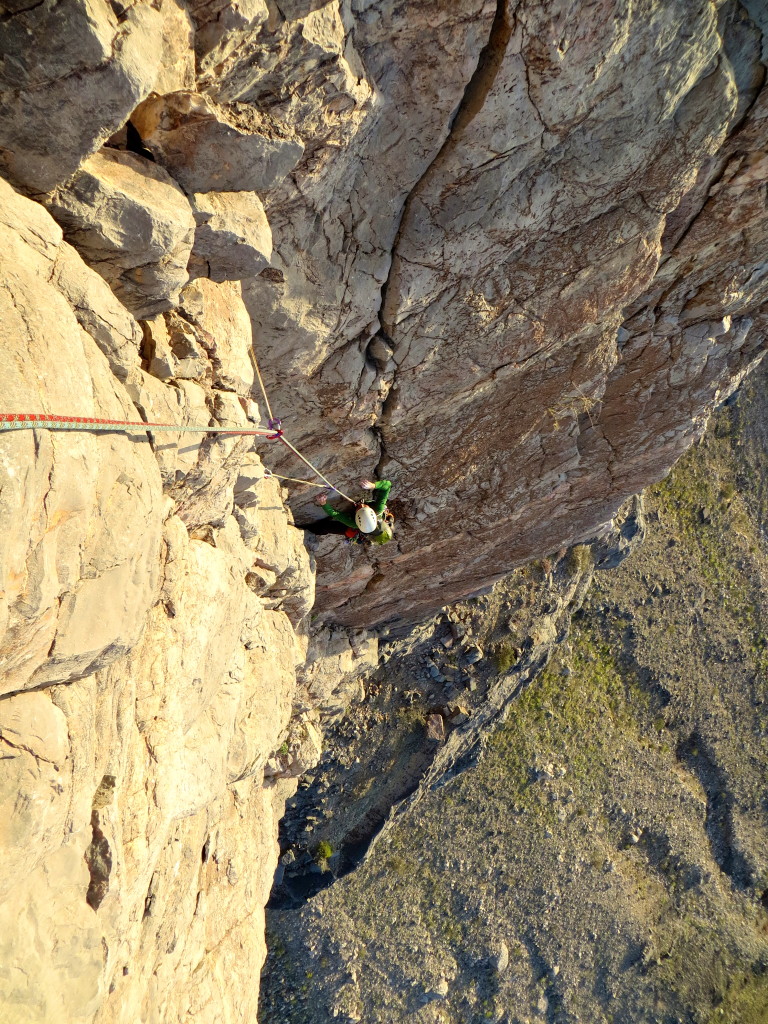 Shirley following the very nice pitch 1 of The French Pillar. That flake with a deeper golden left edge will soon be dropped off in a mailbox by Shirley (Feb. 2014). 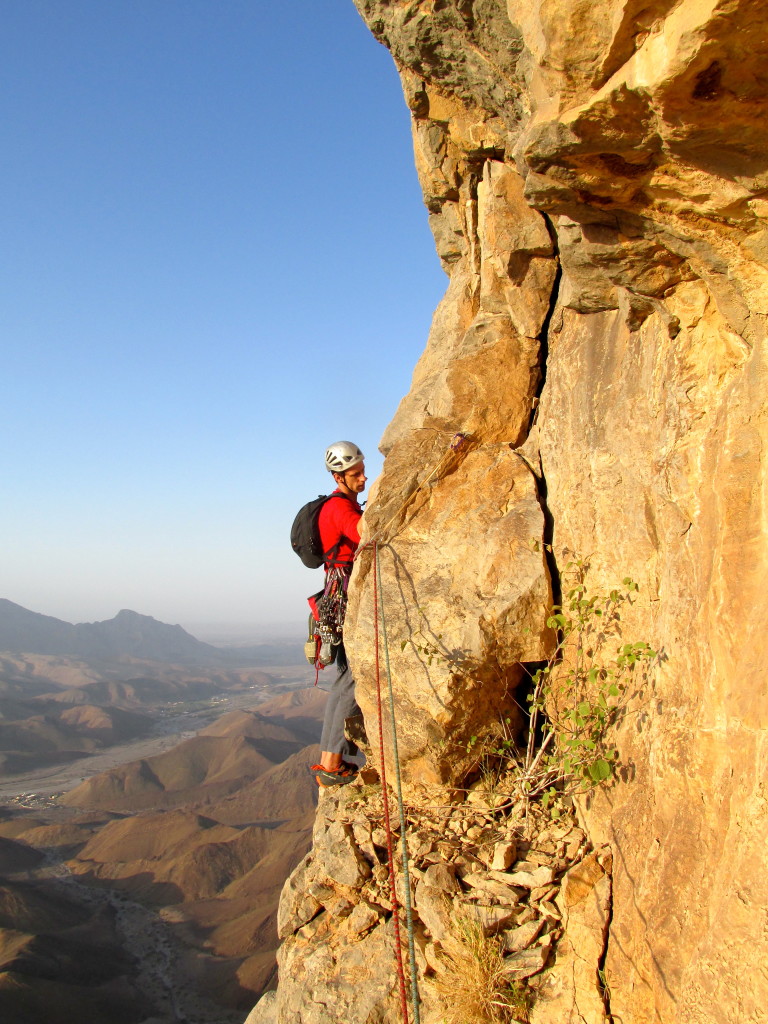 About to find out what E3 5c means on the crux pitch two. Though some argue that it’s only E2…either way, brilliant fun mate. 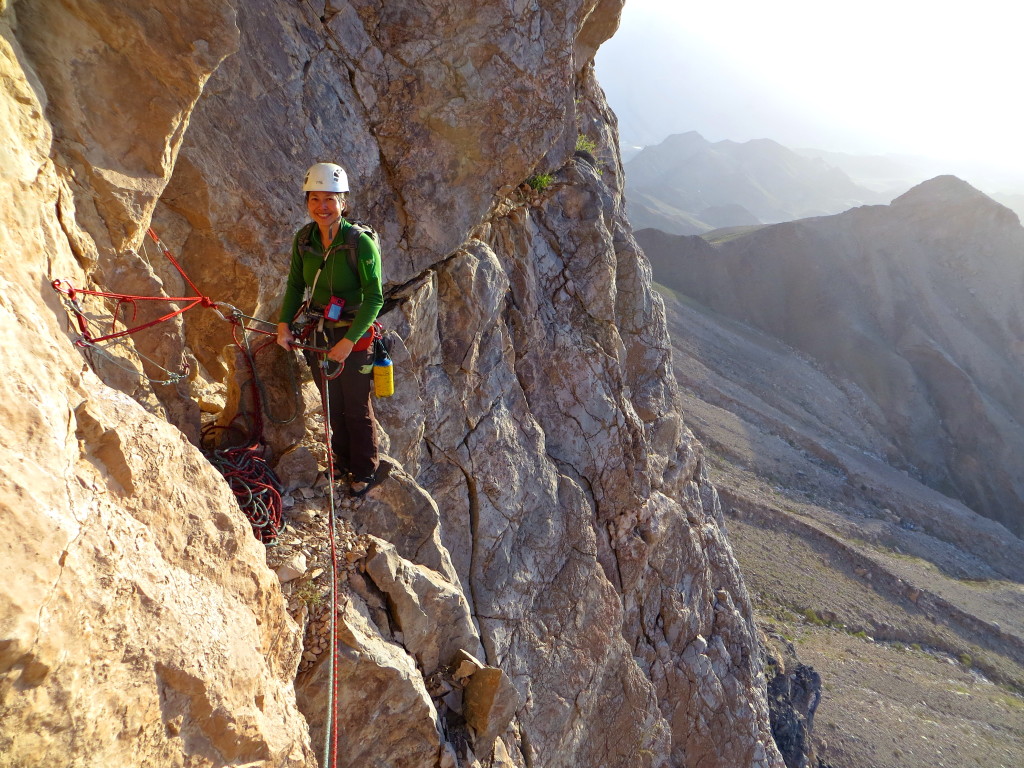 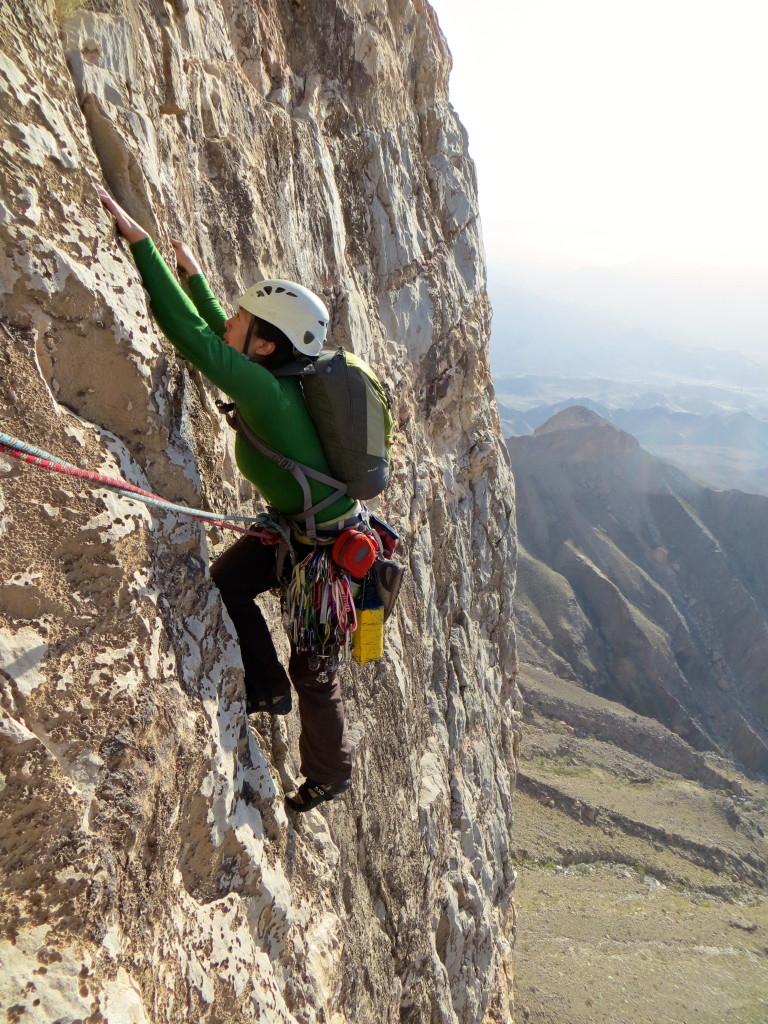 Shirley topping out on our pitch 2 of The French Pillar. Engaging face climbing on excellent quality limestone (Feb. 2014). 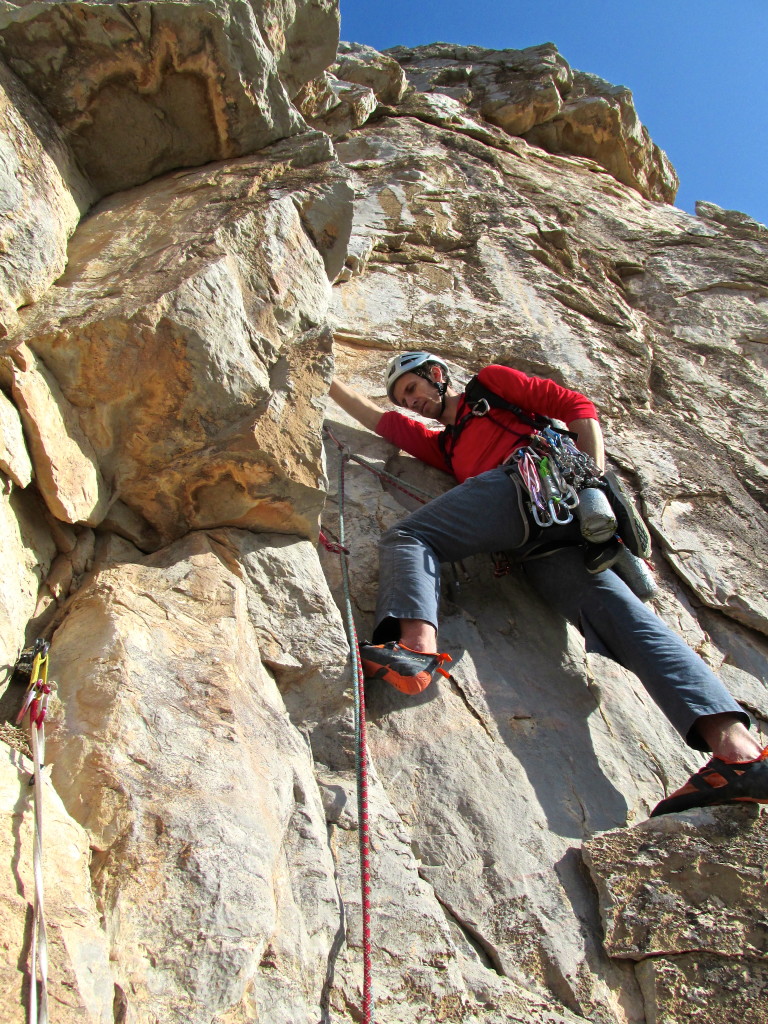 Starting up the upper half of the topo’s pitch two (our third). We found this part significantly easier than the thin face climbing directly below despite what the topo suggests (Feb. 2014). 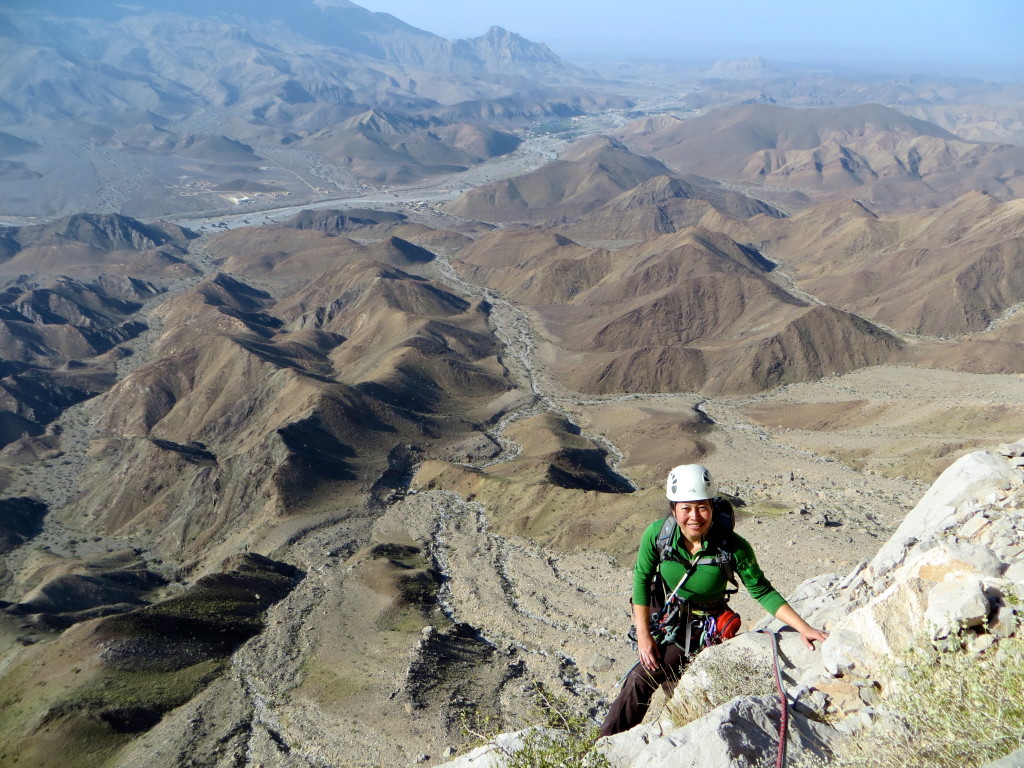 Shirley arriving atop the second pitch (our third). According to the topo, the most difficult climbing is below us and so spirits are soaring. The leftmost wadi in the photo is where our car camp is (Feb. 2014). 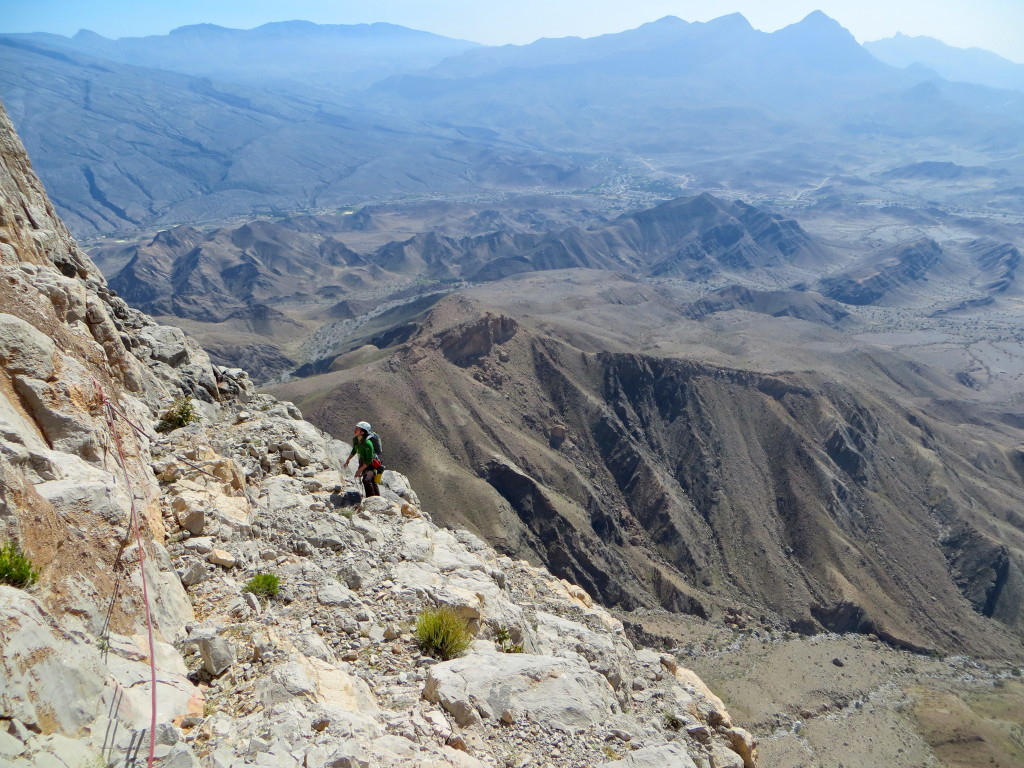 Shirley arriving at the base of The Heart feature (Feb. 2014). 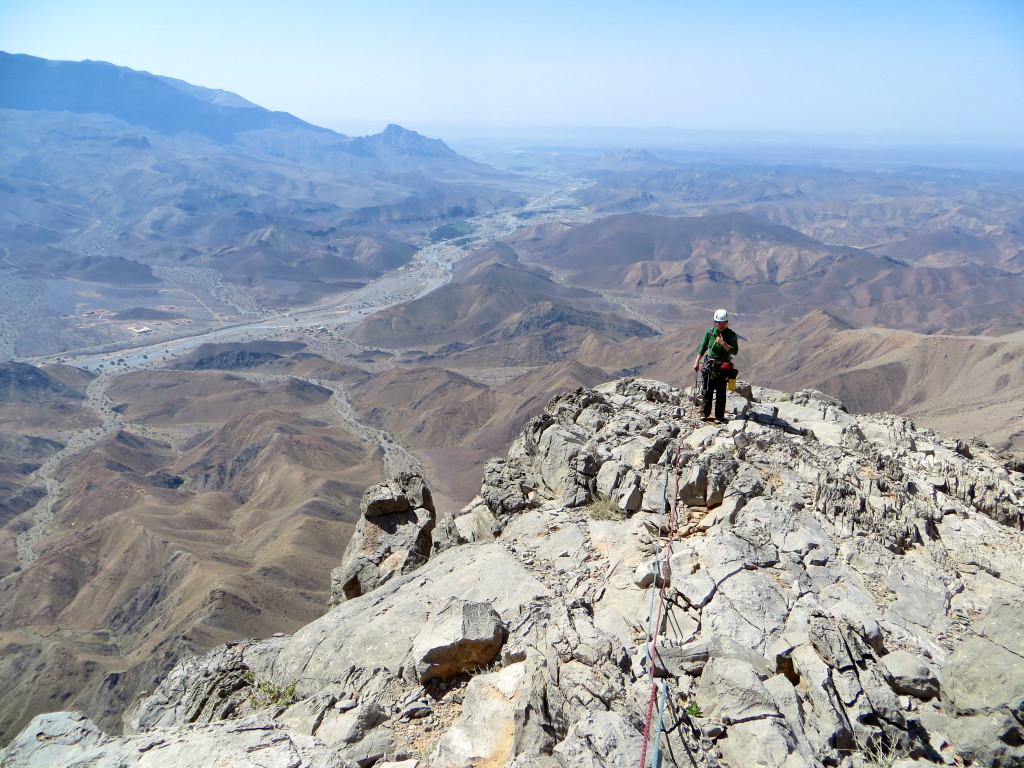 Shirley topping out on The Heart feature and the start of the ridge section. Village of Al Ayn is far in the background (Feb. 2014). 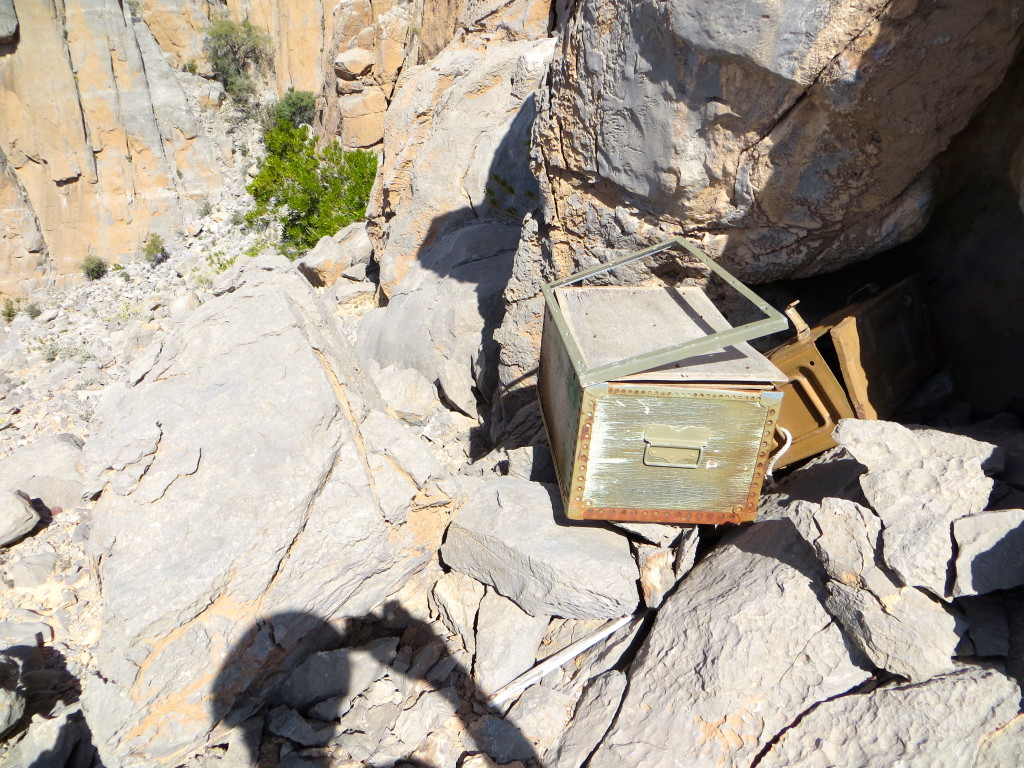 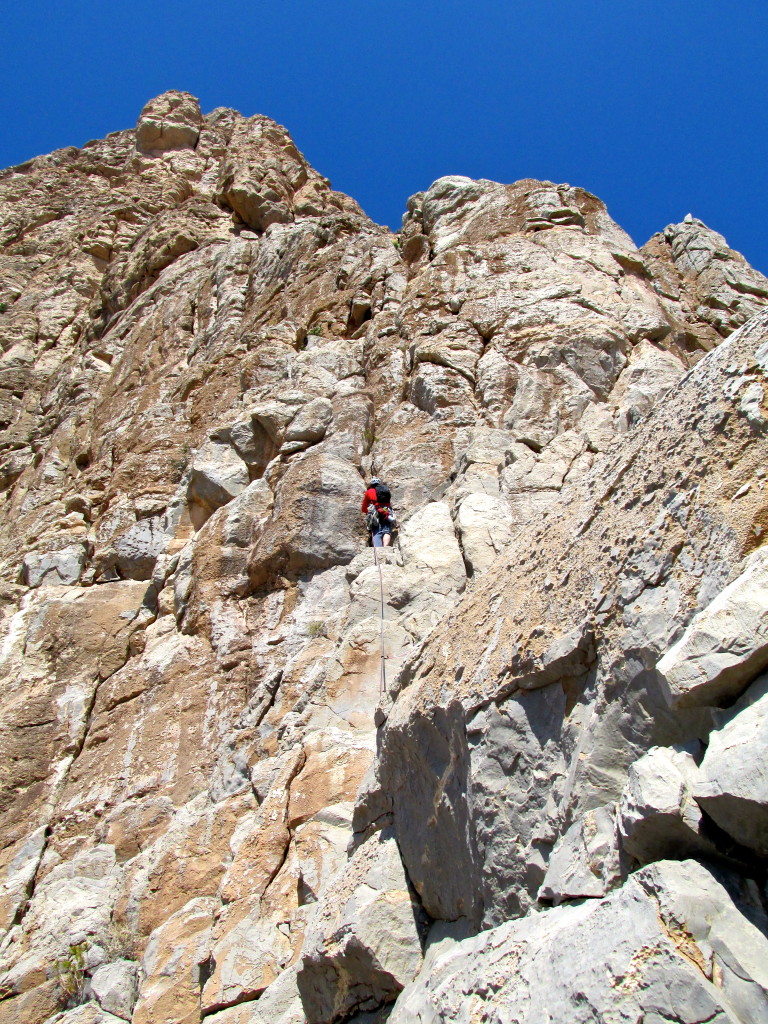 On the upper portions of the ridge. You go from third class terrain below to some intermittent 5.8-ish sections all the way to the top of the ridge (Feb. 2014). 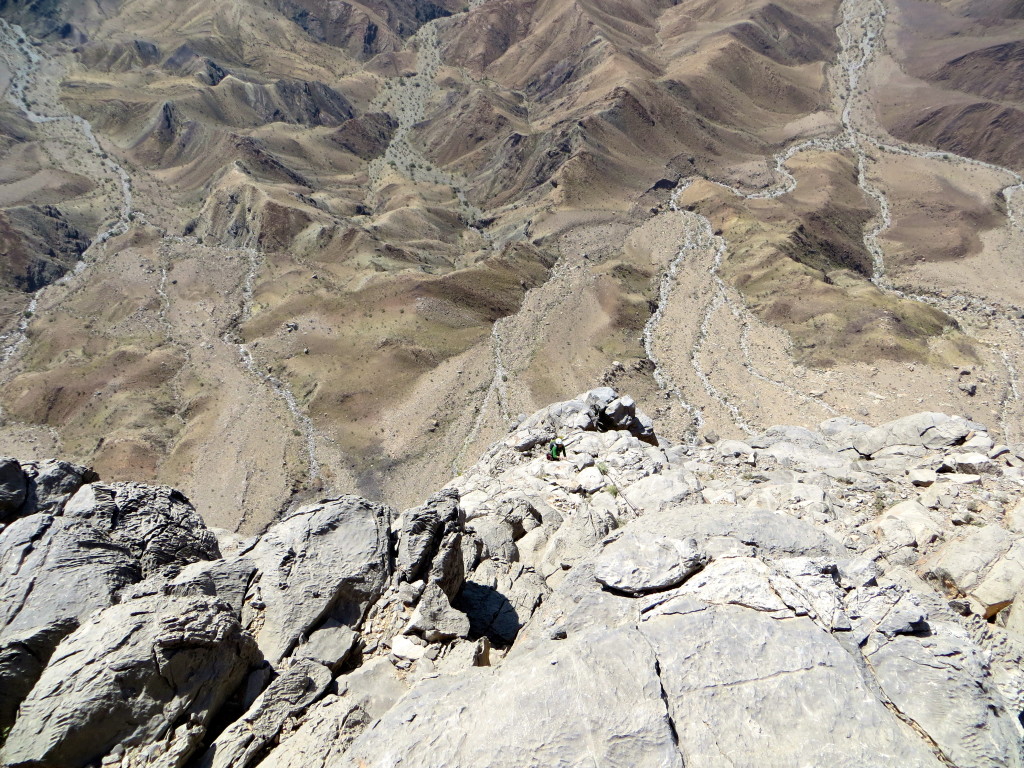 Shirley higher up on the ridge where the terrain steepens and becomes more exposed (Feb. 2014). 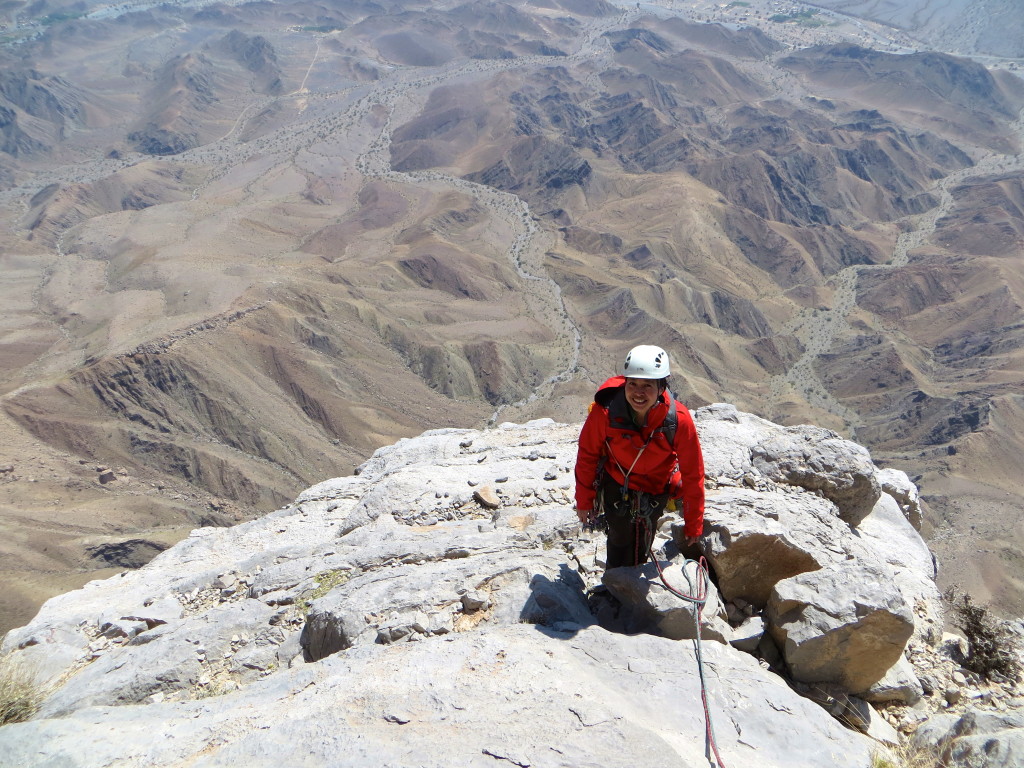 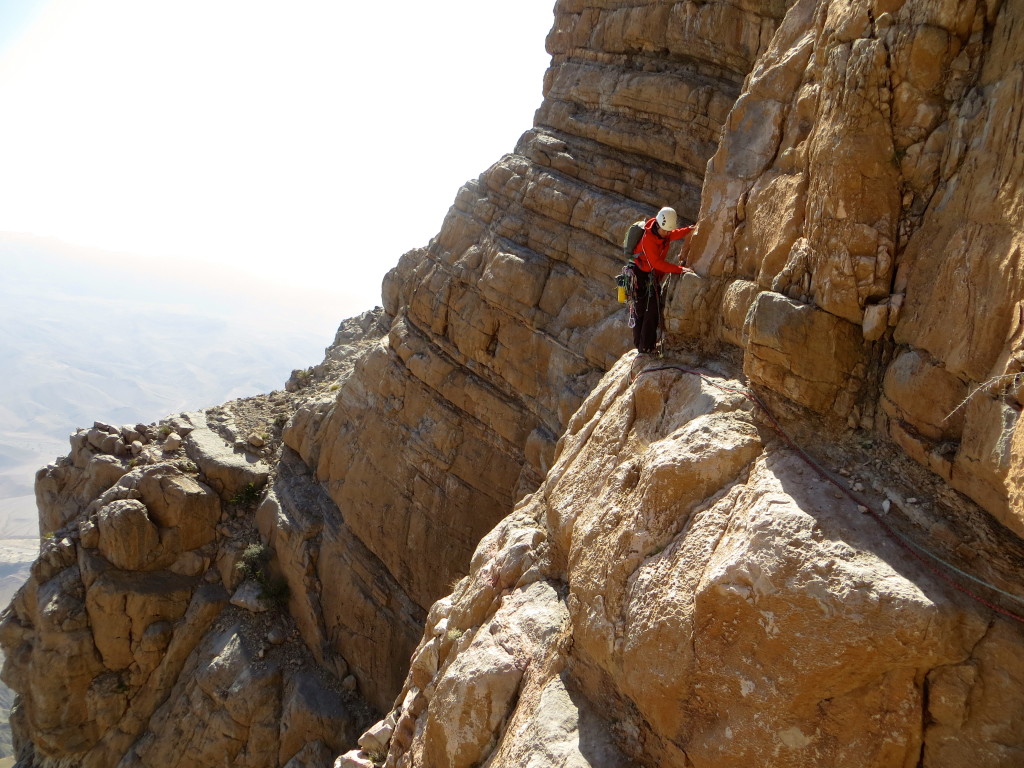 Shirley on the long traverse that connects the ridge section of the route with the pitches of the finishing headwall. The traverse follows the ledge in the background that is level with Shirley’s helmet (Feb. 2014). 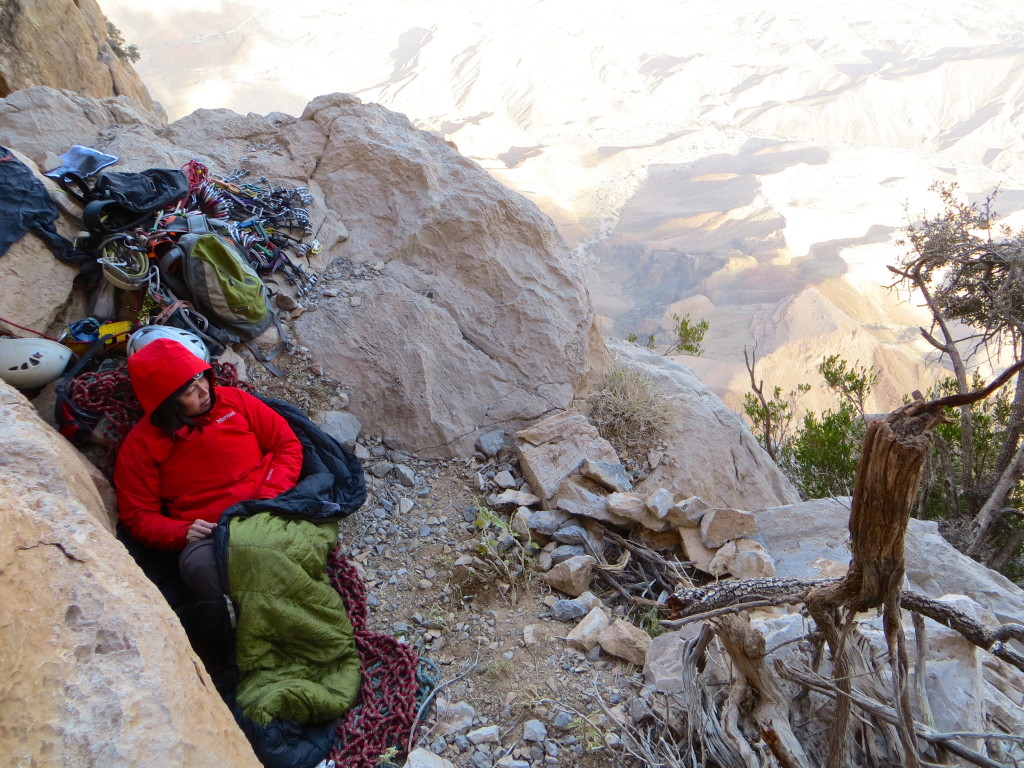 We knew we were going to bivy somewhere and so we had a very light sleeping bag with us this time. This spacious ledge and ample firewood seemed too good to pass up – perhaps this was a good choice as it seems that most of the firewood on the summit has gone up in smoke already (Feb. 2014).

The village of Al Hayl with its mosque as seen from our bivy site high on The French Pillar (Feb. 2014). 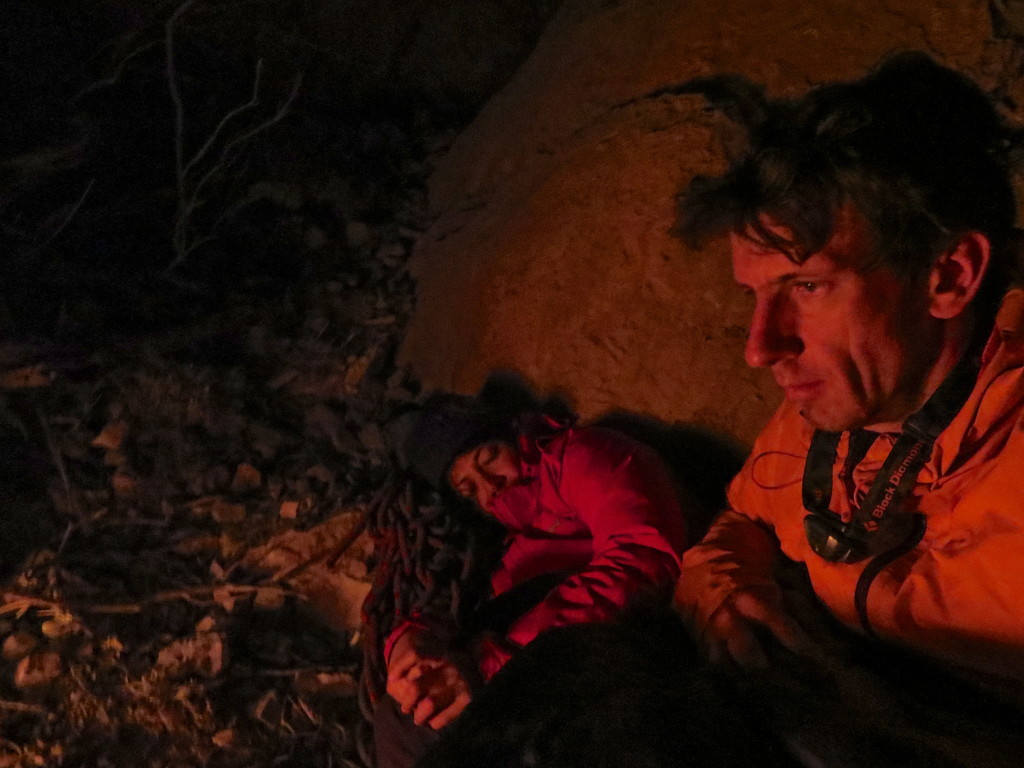 Standard bivy routine: stoke the fire, fade out and wake up from cold when it dies down again (though Shirley looks perfectly comfortable).

Go to The Descent page.
Go back to Oman page.