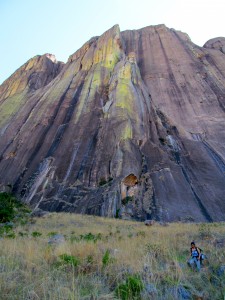 The descent from Cas Nullard made an impression on us and we took another rest day. Although Camp Catta had been a neatly divided place (tourists on one side, climbers on the other with only a bare minimum acknowledgement of one another), some tourists cornered us and we endured a session of listening to their bullshit about (1) how they totally love (“adore”) the simple life of Malagasy people and (2) how much they hate the US. Old, spoiled, rich farts – the whole fucking lot of them. Manager-type assholes used to having people listen to their bullshit & hence reinforcing their already unwavering belief in their own brilliance. Longing for the simple life of the locals while jet setting across the world & staying in high end hotels whenever possible (and needing a guide to do a 20 minute walk outside of the camp…at least here the locals can benefit from the morons). 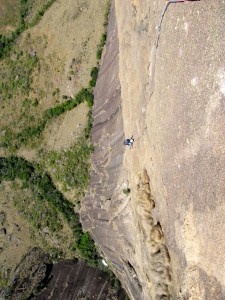 Up pre-dawn the next day. Things have been getting quite hot in those last few days (no more winds). We figured it was time to try Out Of Africa. I was nervous. Having read reports of 6b+ moves way above bolts and then there was that mandatory 6c rating on a 14-pitch route that included a 6c+ pitch and two 7a’s. But we figured we could bail if needed. As I started up the first pitch, a family of lemurs decided to make a run for it on the slab a pitch above me. It was one of the high points of the trip. I mean it doesn’t get any more Madagascar-ish than lemurs, eh? The first two or three pitches were not bad (6a+ max). The first 6b+ pitch required some slabby, crimpy moves a bit above a bolt but again nothing too bad. Things were moving along for us. Shirley was not having a great time with the pack on (carrying extra water and our shoes) but we were making progress. The seventh pitch was the first sting but that was expected given its 6c+ rating. Things started off easy (6a) and progressed to difficult in the last three clips, the crux being a pull over a bulge on Smith like nubbins with smeary feet. I rested on the bolt before but then did the moves (for me, a good performance). I arrived at the belay, looked up and my heart kind of sank. Two bolts spaced more or less like before with the third 25 feet above the second on some steep terrain. I was intimidated. Shirley came up and I led off. First clip, second clip – I did not have it. Could not commit to the hard moves above the second bolt. The thought of more continually hard and stressful terrain to the top further deflated me. I lowered, we rapped. 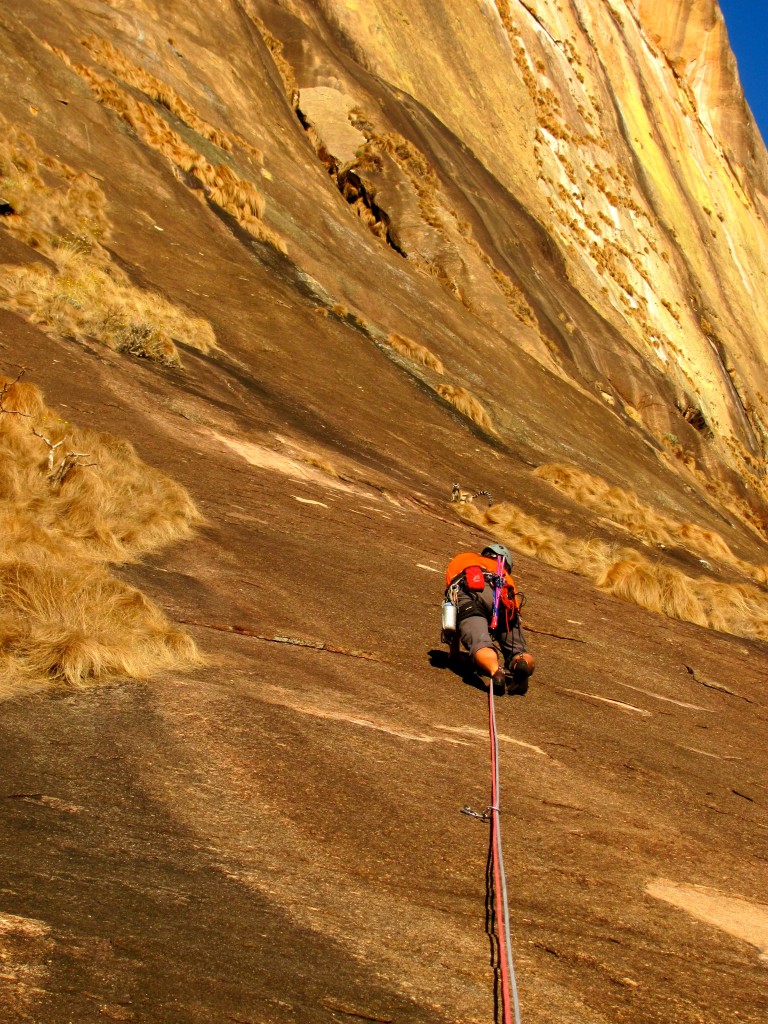 Starting up pitch 1 of Out Of Africa on Tsaranoro Kely with a bunch of lemurs watching me from higher on pitch 1 (Sept. 2011). 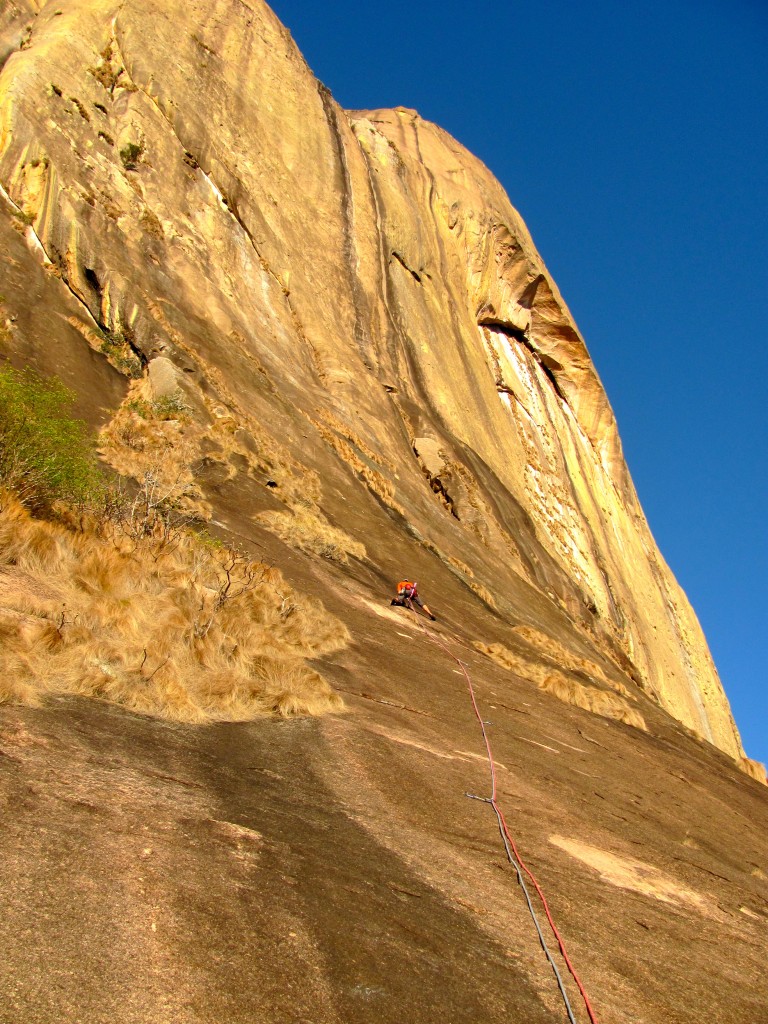 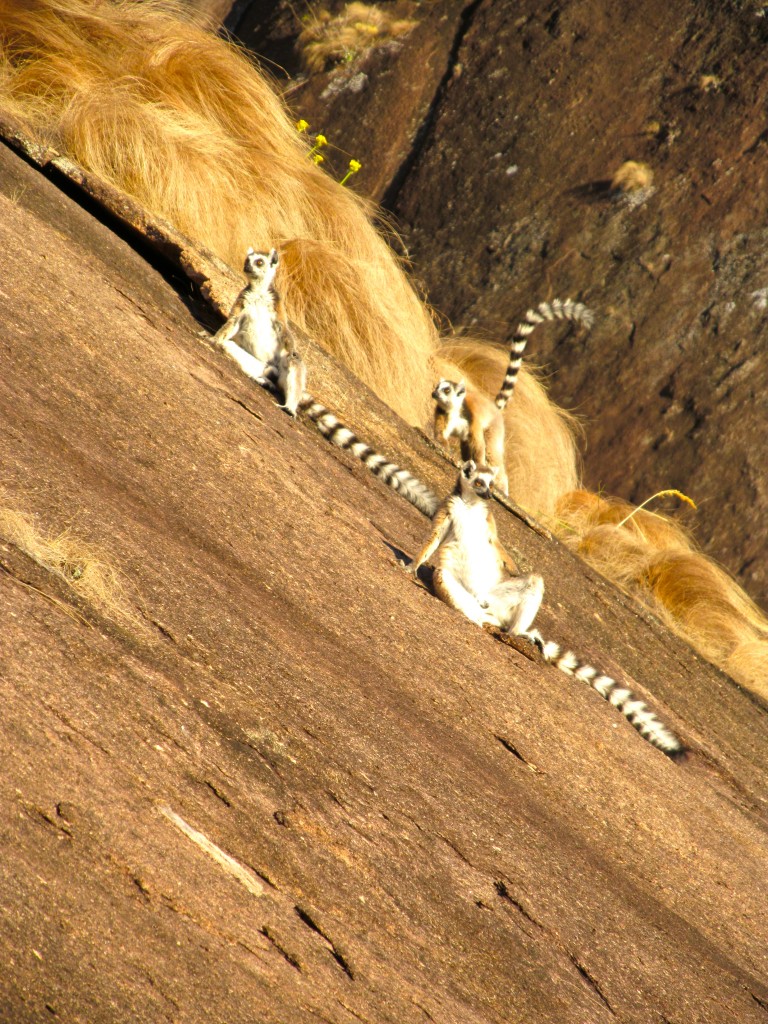 When I arrived at the first belay it was already a cluster fuck (Sept. 2011). 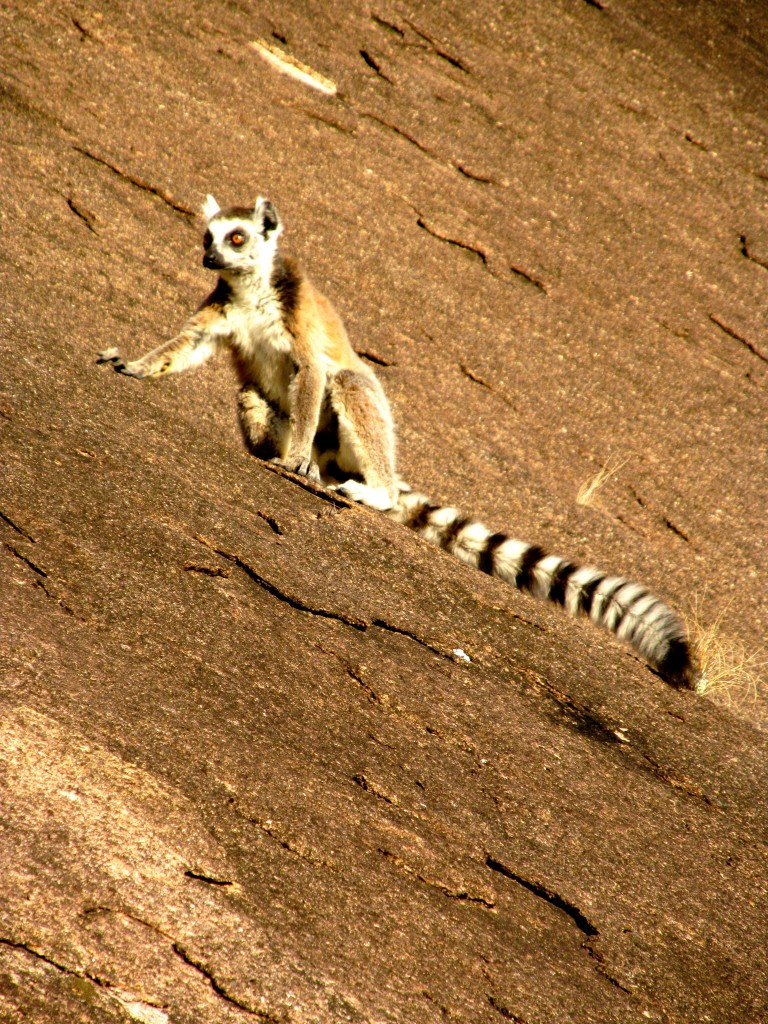 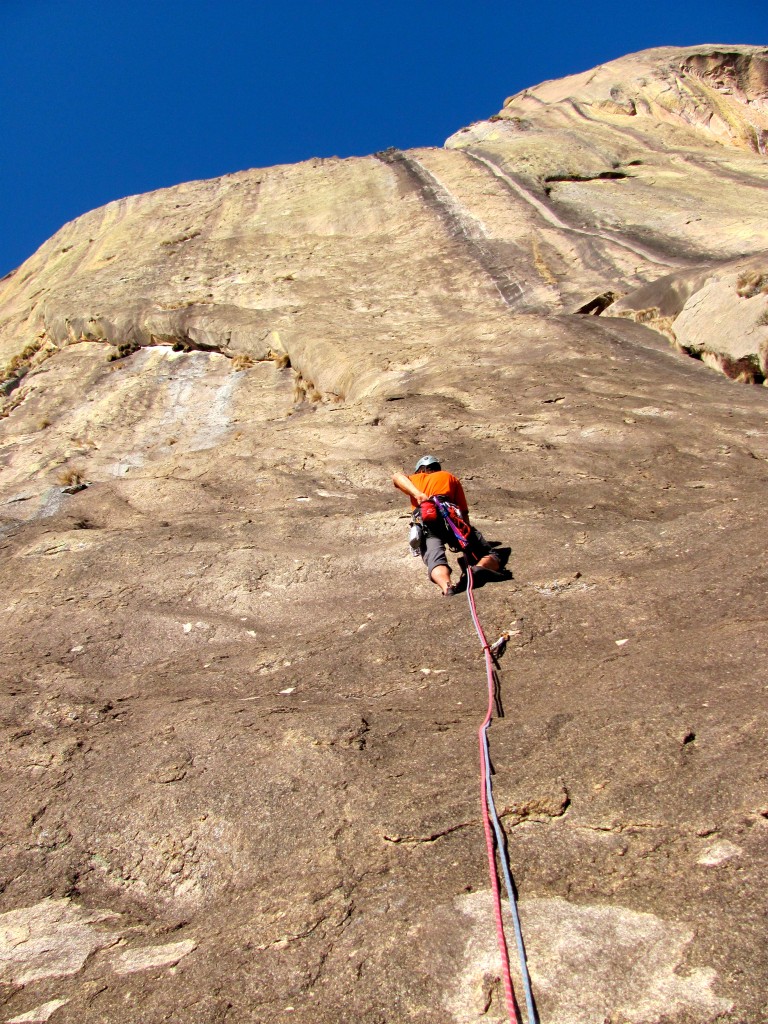 Starting up pitch 2 of Out Of Africa. The route climbs up and leftward shadowing the obvious dihedral on the face above it (Sept. 2011). 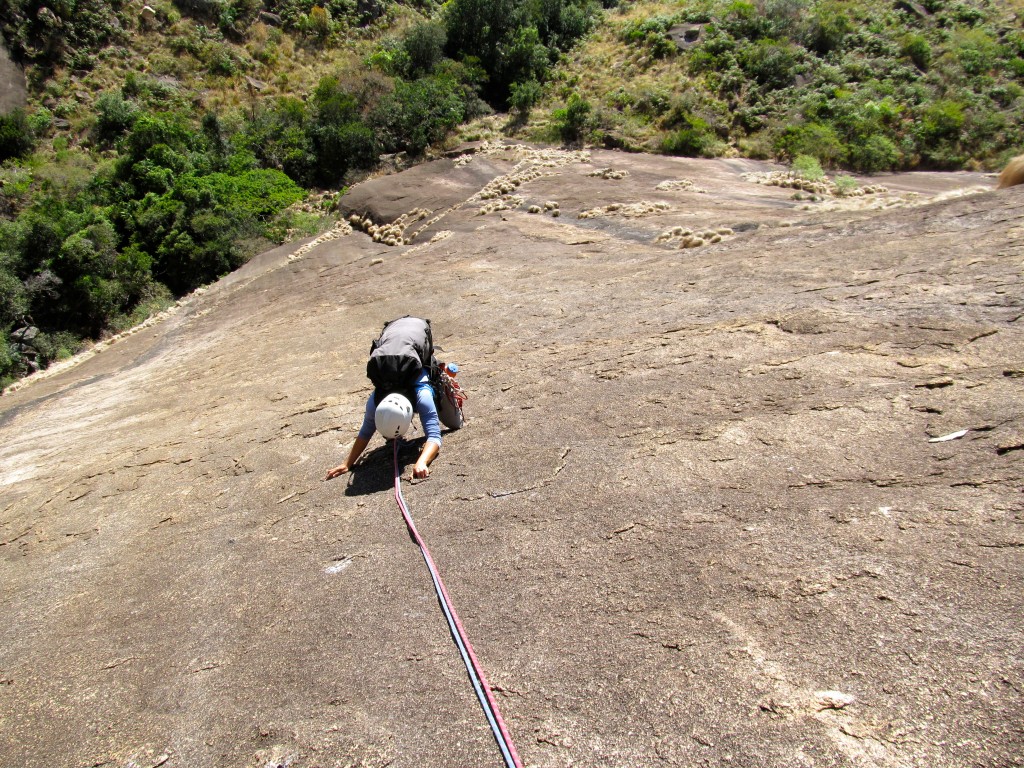 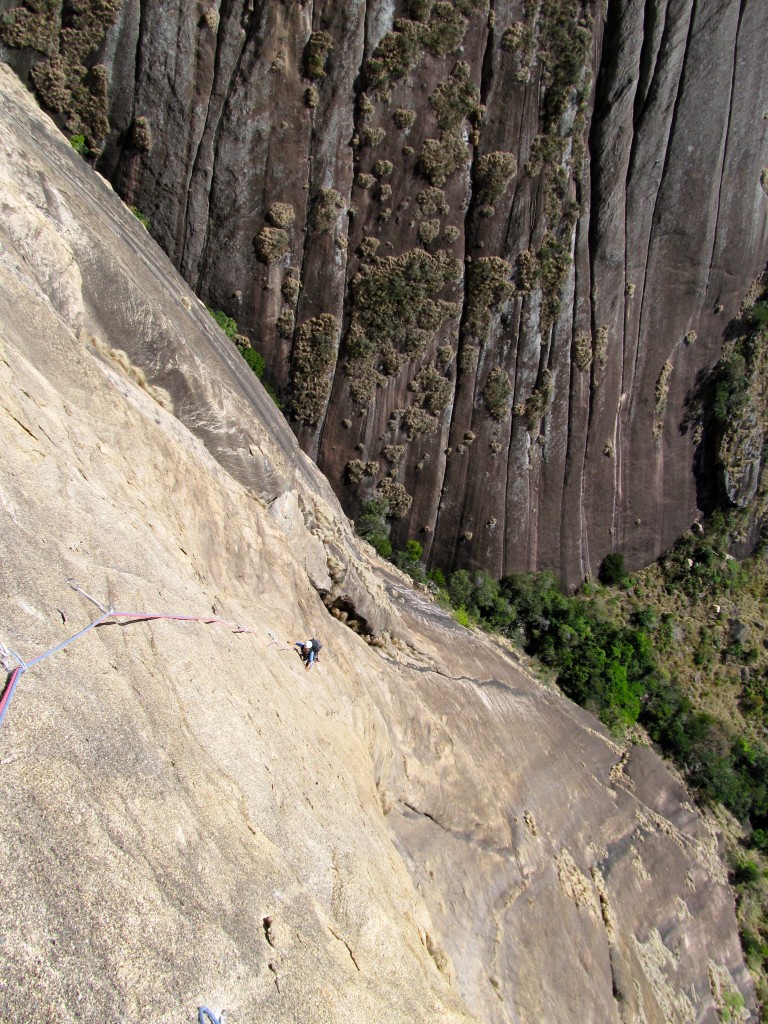 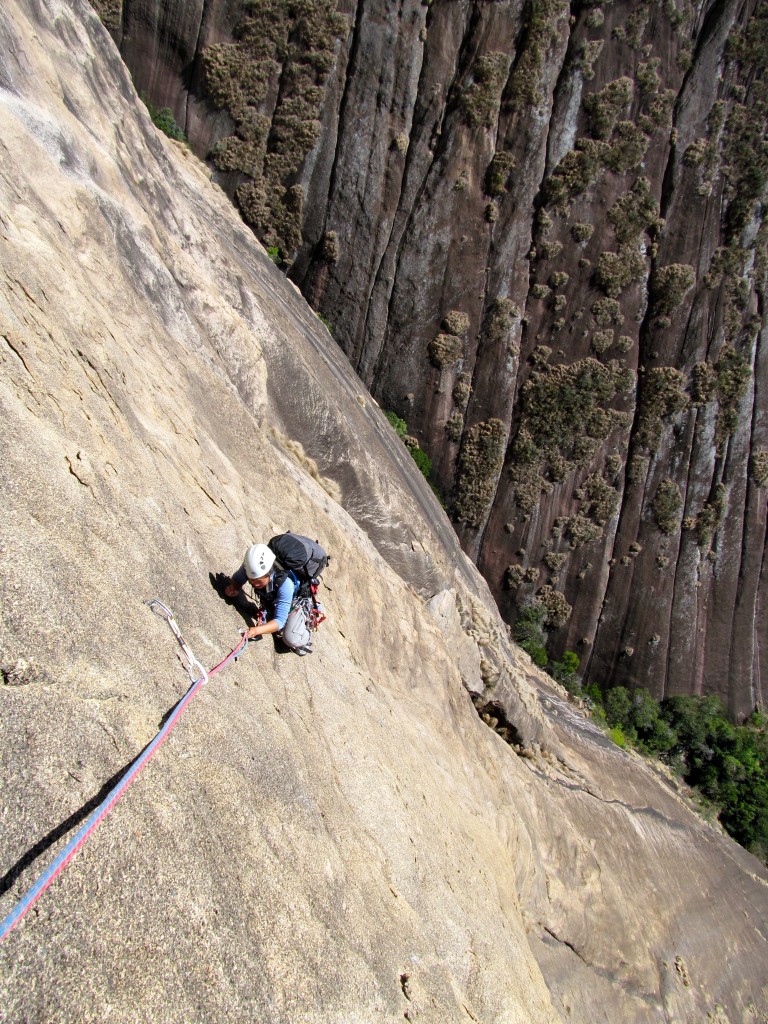 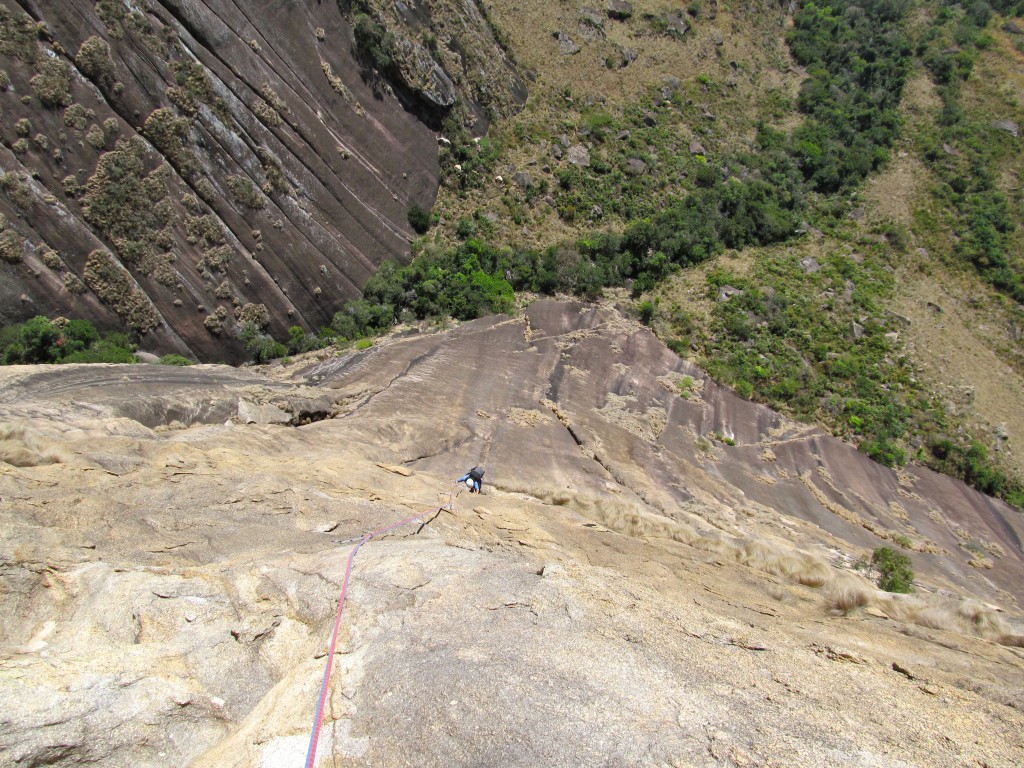 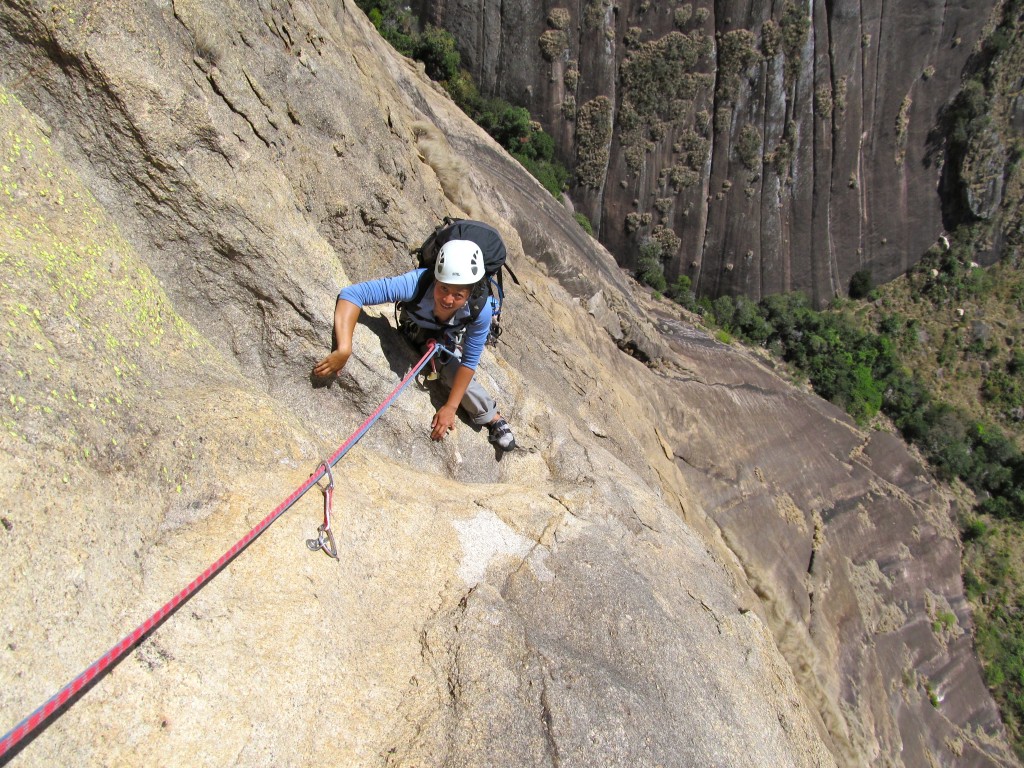 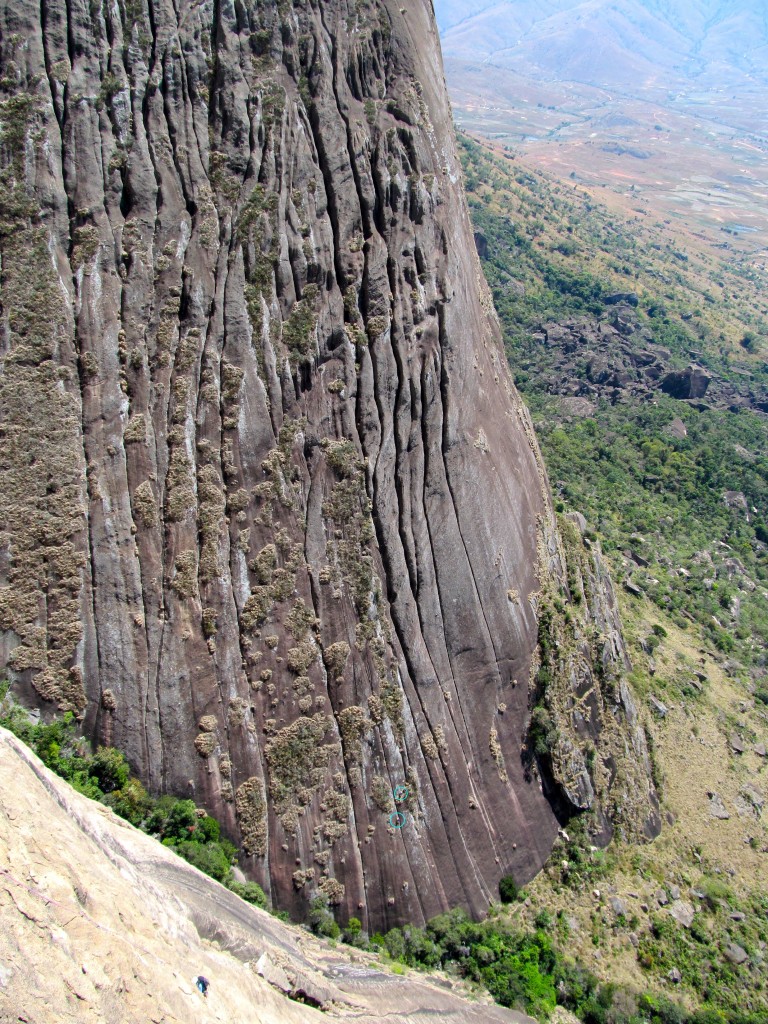 Our friends Lorella and Andrea (blue circles) climbing Cas Nullard across the way on the Karambony formation (Sept. 2011). 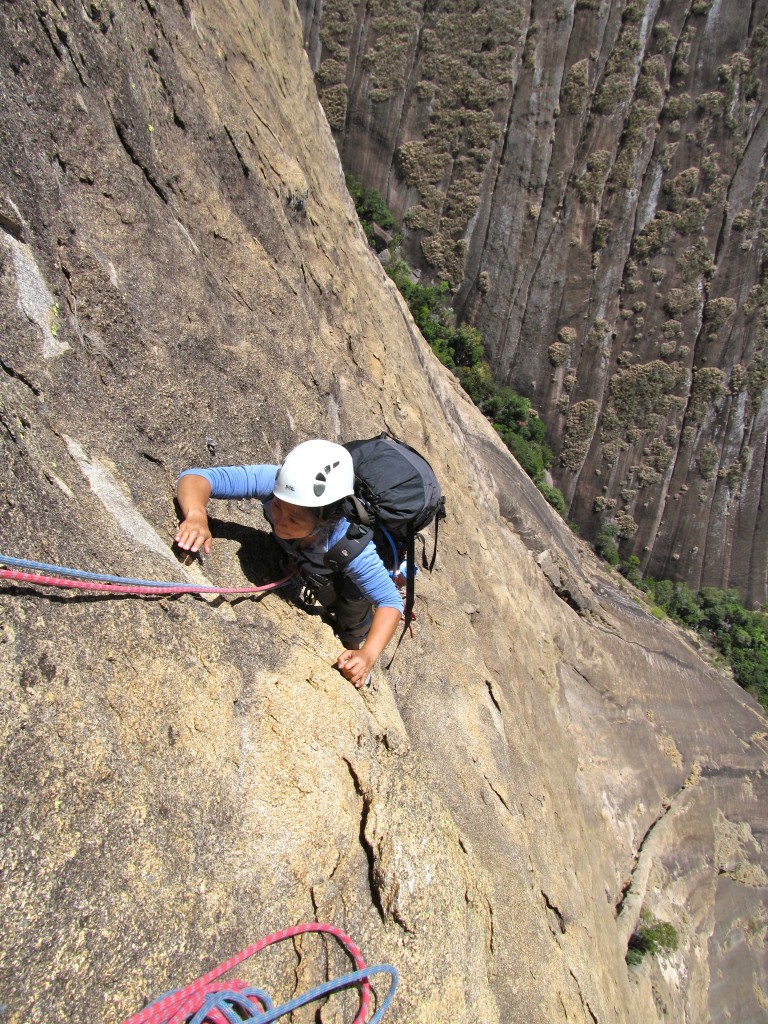 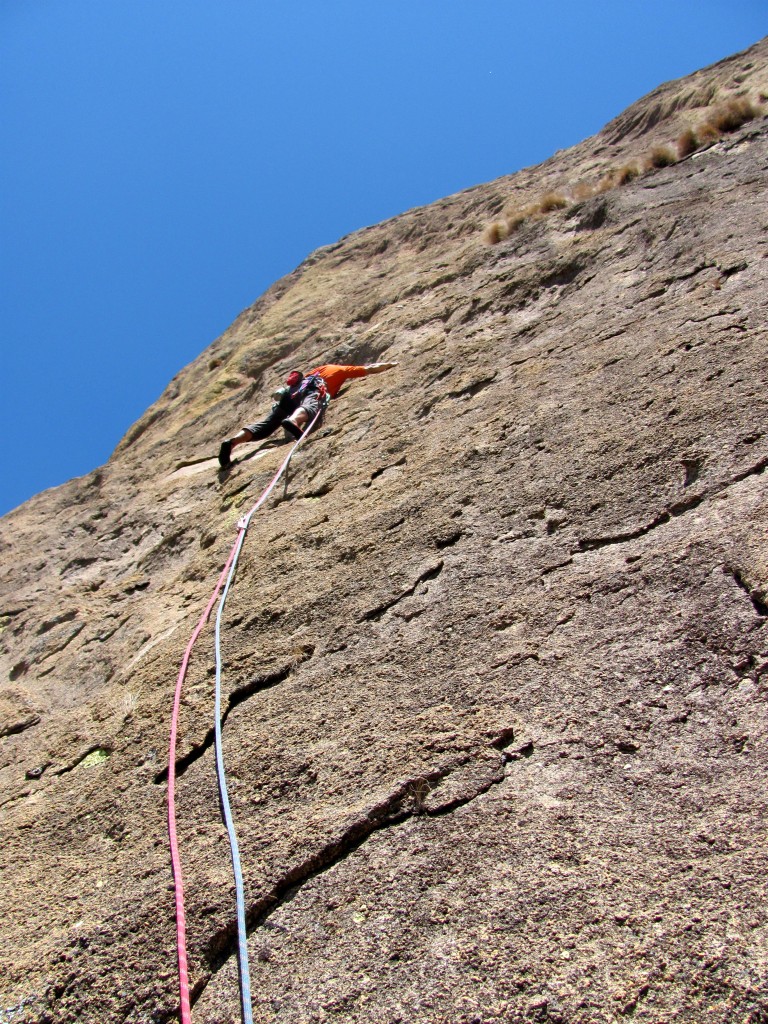 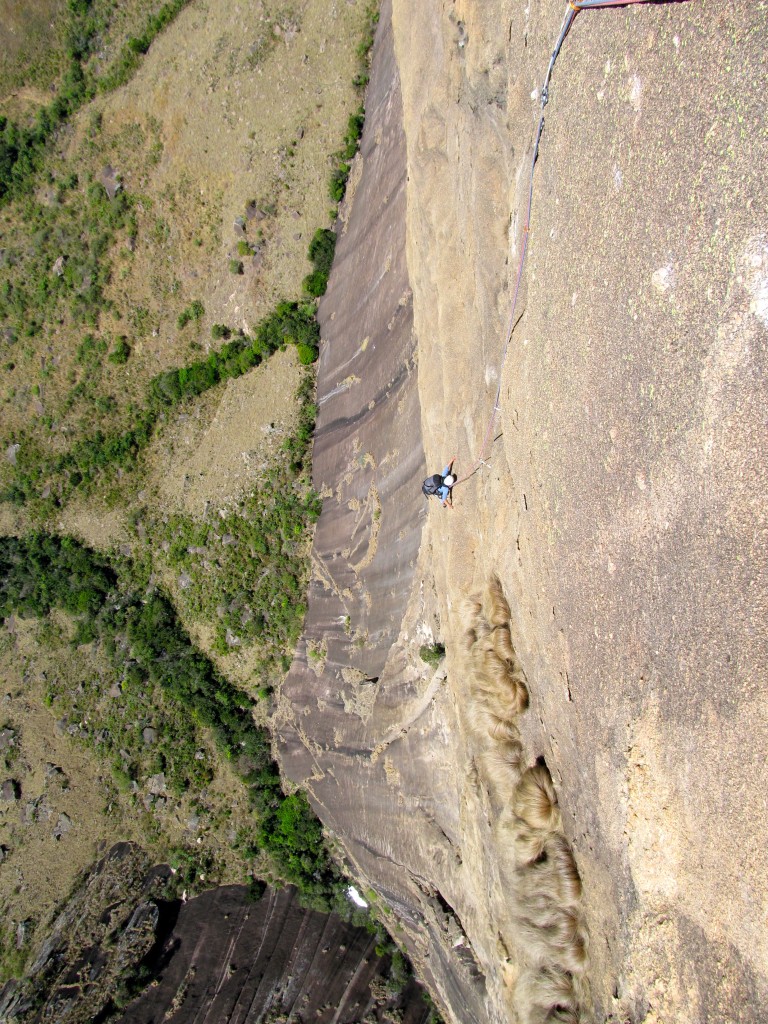 View down back towards Shirley from top of pitch 7 of Out Of Africa...unfortunately our highpoint (Sept. 2011). 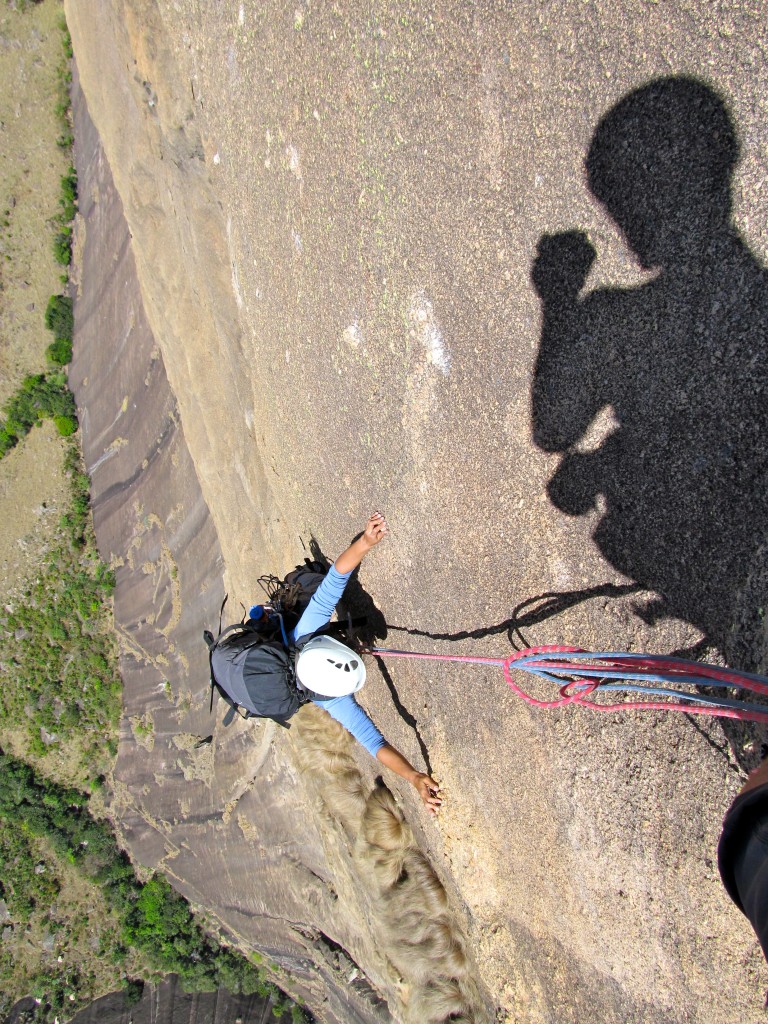 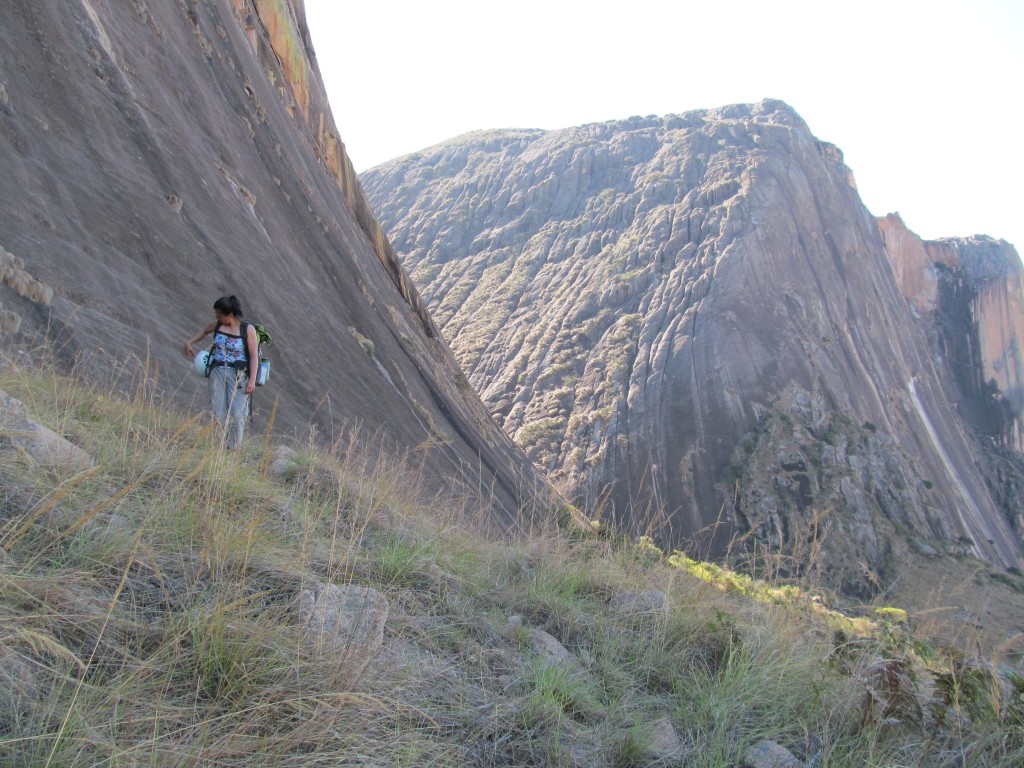 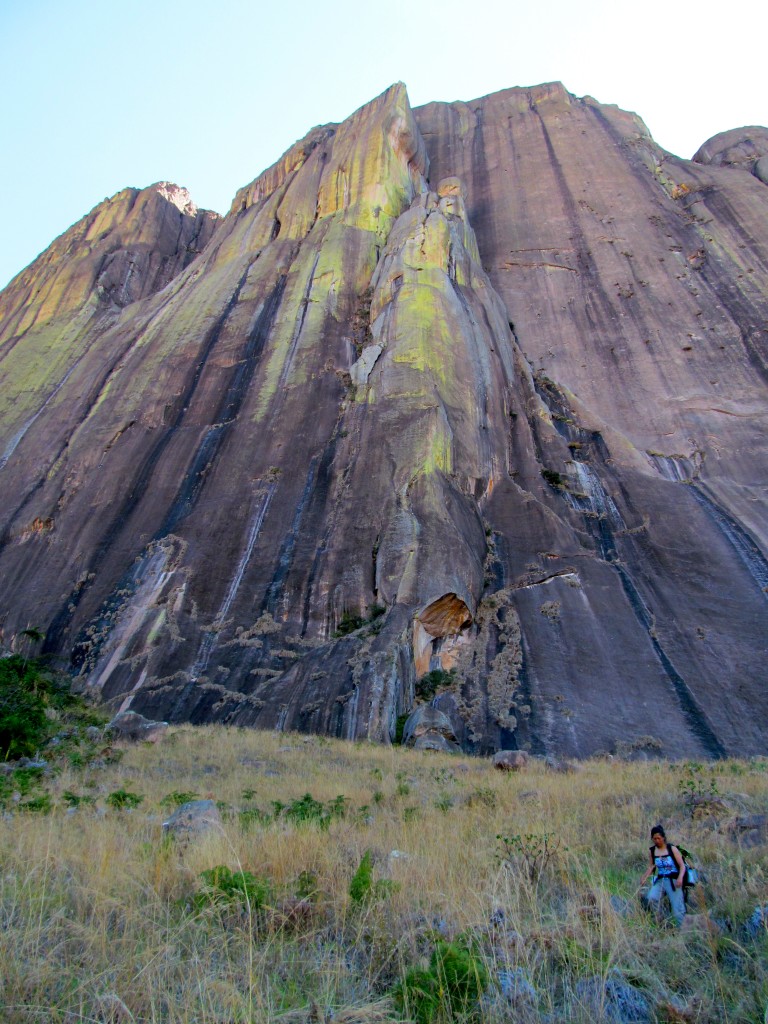 Shirley hiking down after our failure on Out Of Africa. Main Tsaranoro formation (Tsaranoro Be) is in background...proudly topping out at 800 meters tall. For example, somewhere near the right edge of the photo is the route Gondwanaland, 20 pitches long and rated 7c/7a+ mandatory (Sept. 2011). 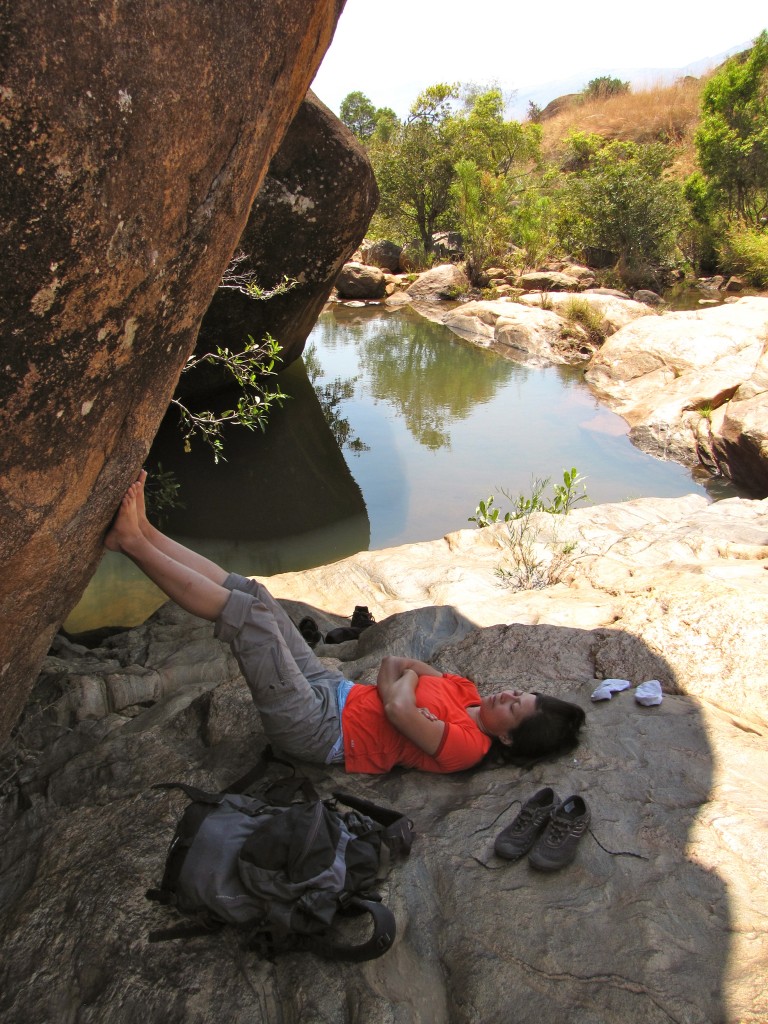 Shirley chilling out by a natural pool not far from Camp Catta (& licking our wounds of defeat; Sept. 2011). 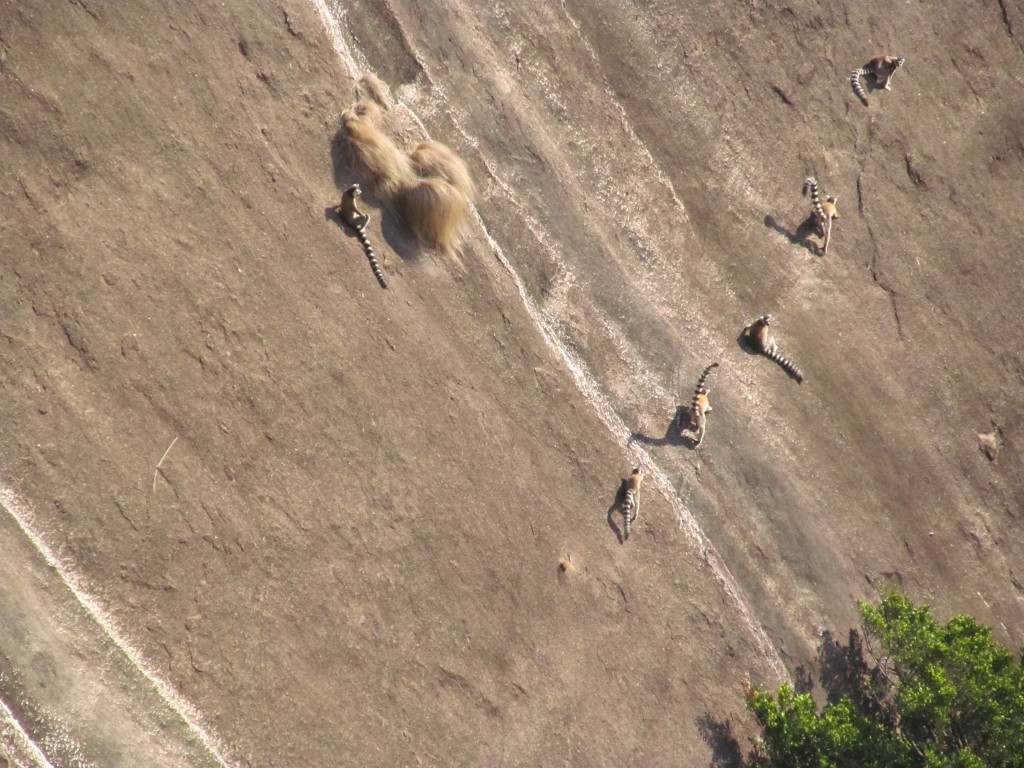 Lemurs traversing the base (like a pitch up) of the Karambony formation (Sept. 2011). 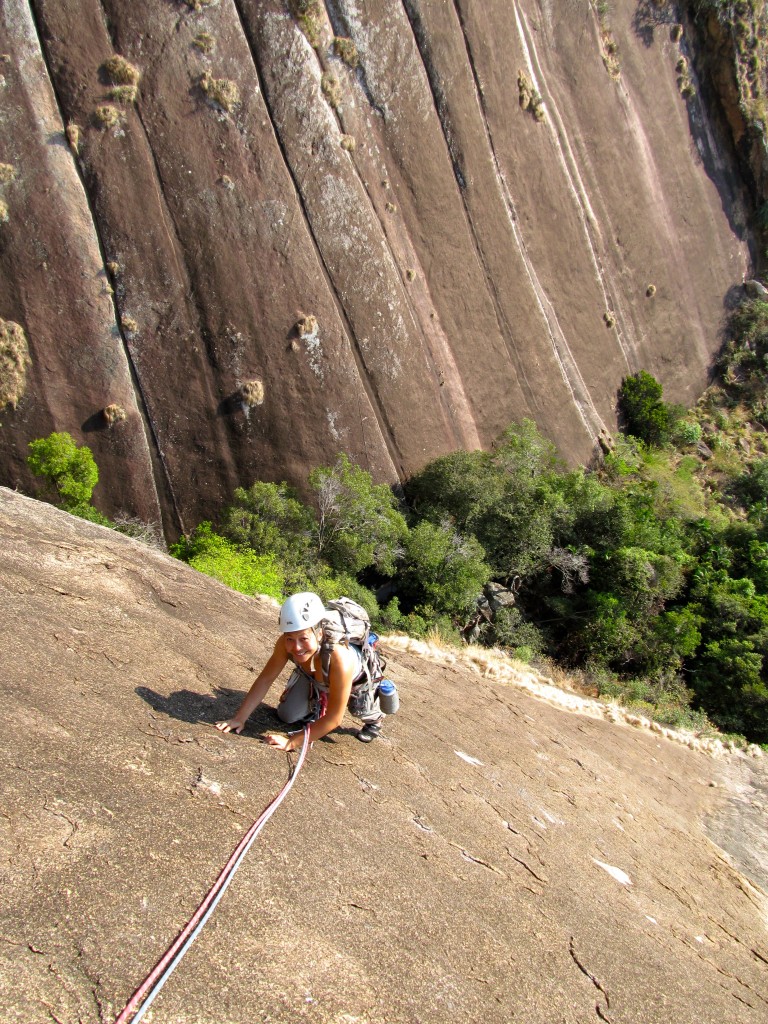 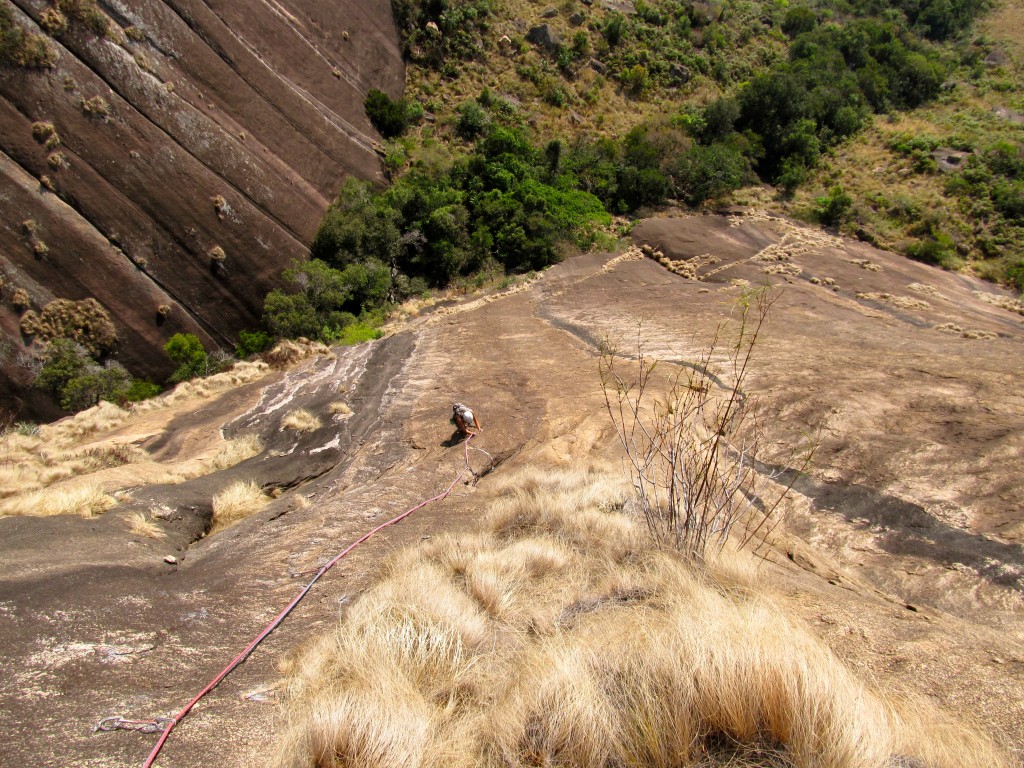 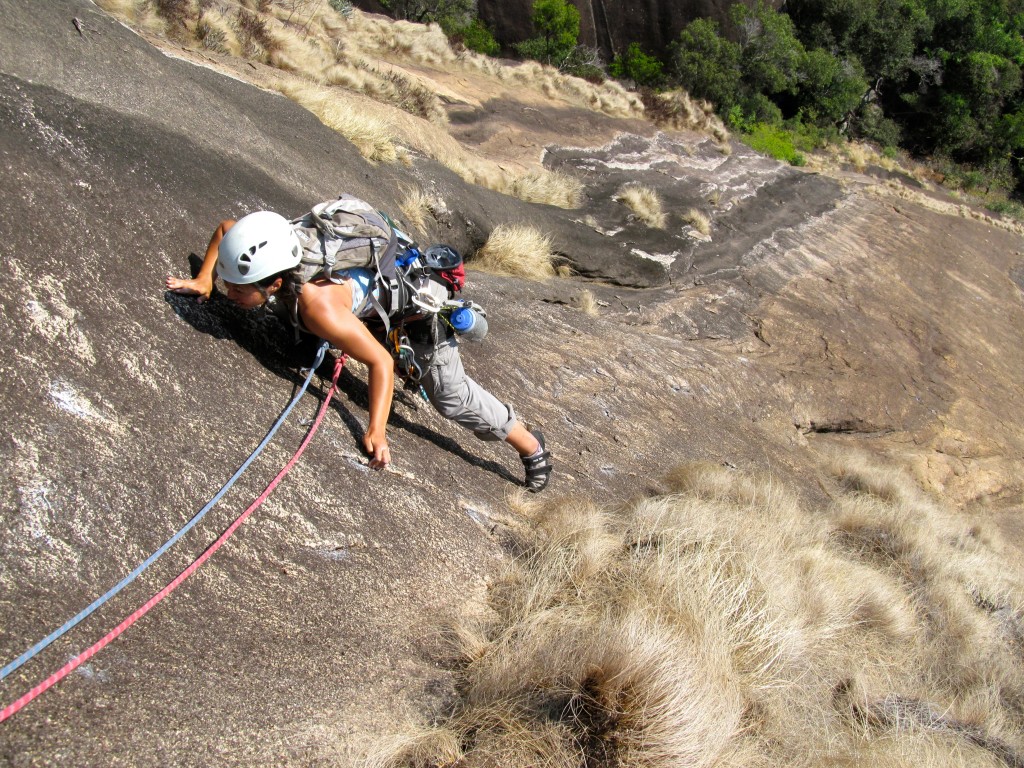 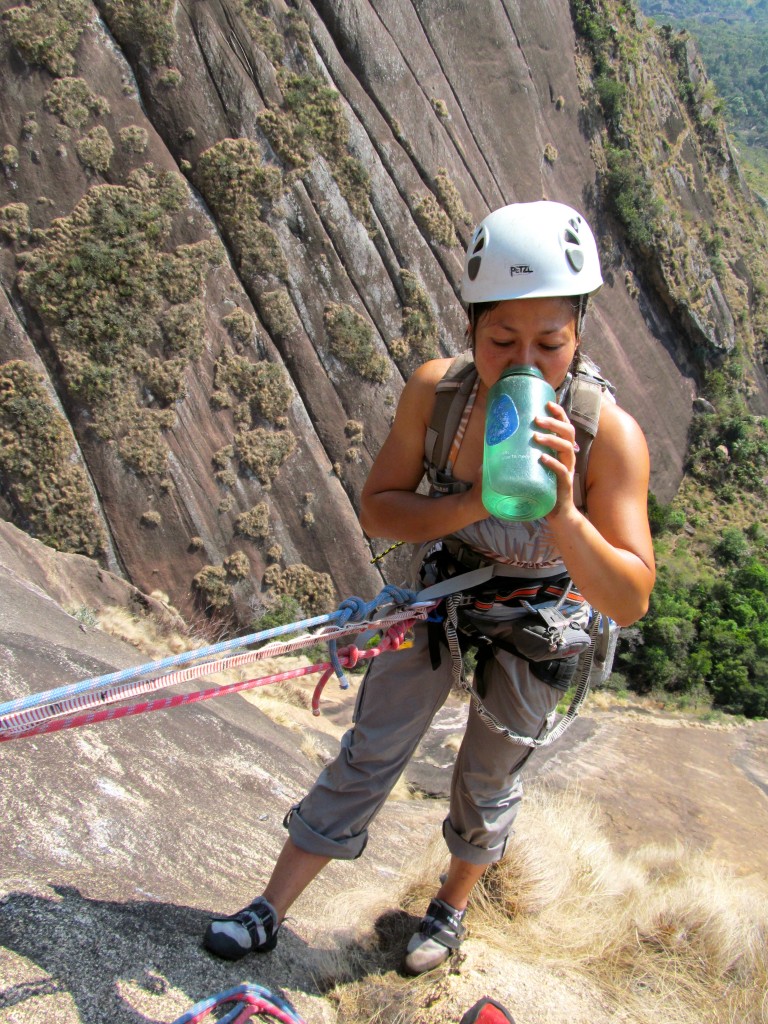 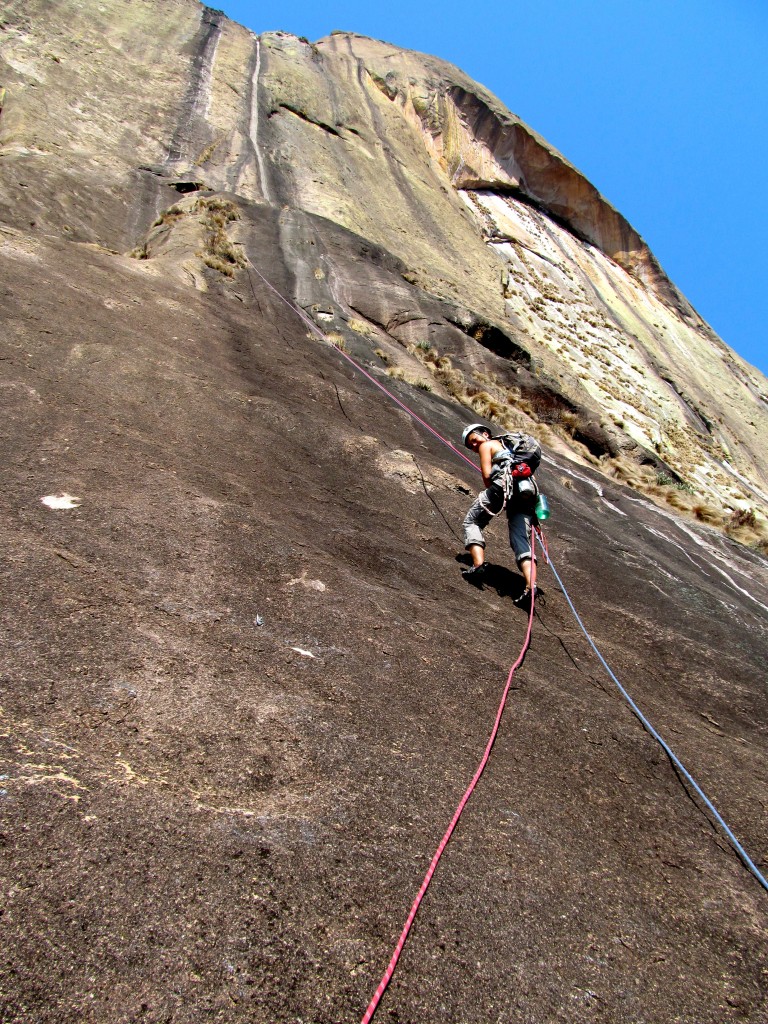 Rapping off the first two pitches of Bravo Les Filles with its characteristic roof looming above (Sept. 2011). 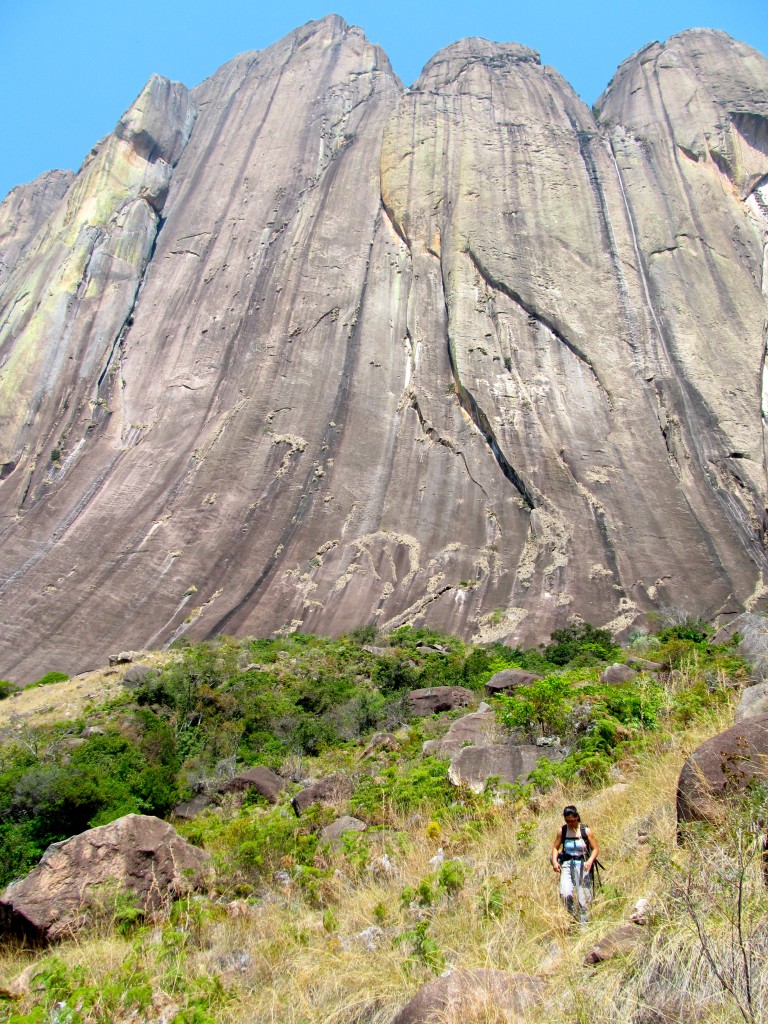 Shirley hiking out on our final day. Tsaranoro Kely and its Out Of Africa route are directly above. Out of Africa starts on the right and then diagonals leftward above the obvious leaning dihedral and then up to the top (Sept. 2011). 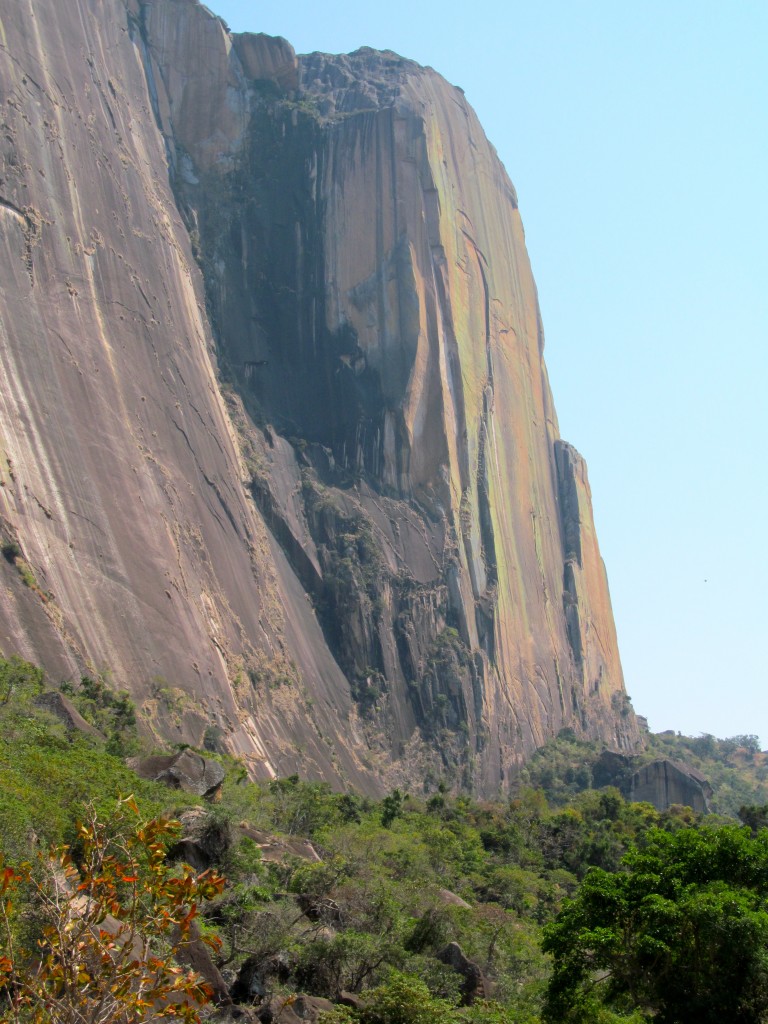 Another view of the Karambony formation (Sept. 2011).

Go to Part 7.
Go back to Madagascar page.