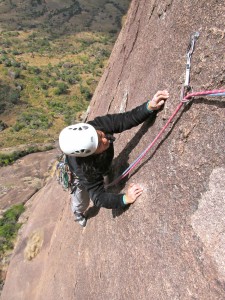 Based on our online research, we knew that the level of climbing on the cliffs of Tsaranoro was pretty damn high. The bulk of the long routes (things up to 20 pitches on 800 meter tall walls) require mandatory free climbing of at least 7a (French sport rating ~ 5.11 YDS) or much (much!) higher. Though we have no hesitation about enjoying a route that requires some aid sections, these lines here don’t really lend themselves to a straightforward pull on a piece or five. The uniqueness of Tsaranoro granite lies in the fact that it’s almost totally devoid of cracks! You are at the mercy of the FA-ists and their bolt gun trigger fingers. And so our list of objectives here was small and uncertain. 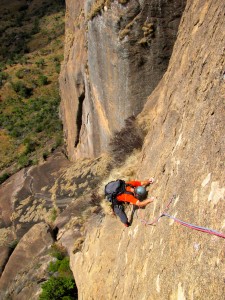 Yours truly on Alien's fifth pitch.

With these doubts in our heads, we woke up on day 1 and following a quick breakfast headed up to the School Wall (Secteur Ecole) to climb one of the easiest lines in the range: the 10-pitch long Alien clocking in at 6b. The first few pitches follow an easy (5c) slab on an apron. The granite is beautiful: high friction, clean, and largely black or dark brown in color. Very unique, at least for us. The route then reaches the upper headwall and difficulties pick up a bit. Low angle slab is replaced by steeper edges a bit reminiscent of some routes in Cochise. The line is well bolted and we were enjoying the day swapping leads. Conditions were windy and things got chilly at belays. The final easy pitch is probably to be avoided (was not set up for rapping…though it is now). We rapped the line and felt generally satisfied with our first outing. The first dinner in Camp Catta did not disappoint either. We also met the other climbers (only ones) in camp that night, four Polish guys who have apparently just sent the (Lynn Hill) line, called Bravo Les Filles clocking rated 8b. They’d continue to do some hard and serious routes for the next week while we wallowed in our intro grades. 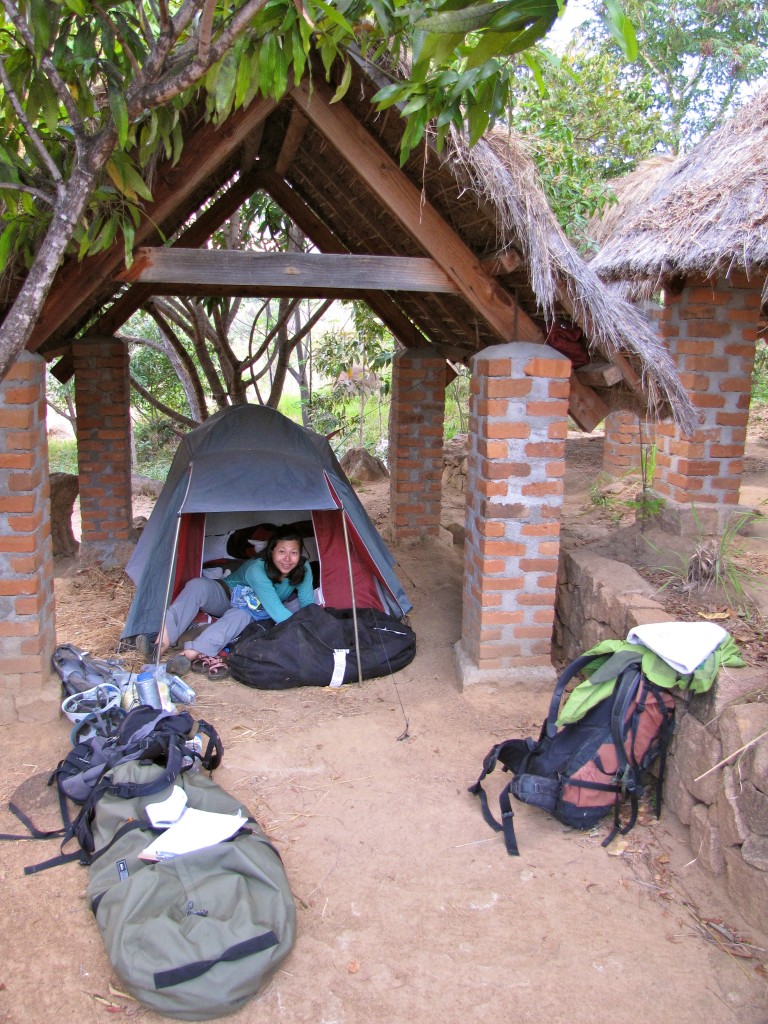 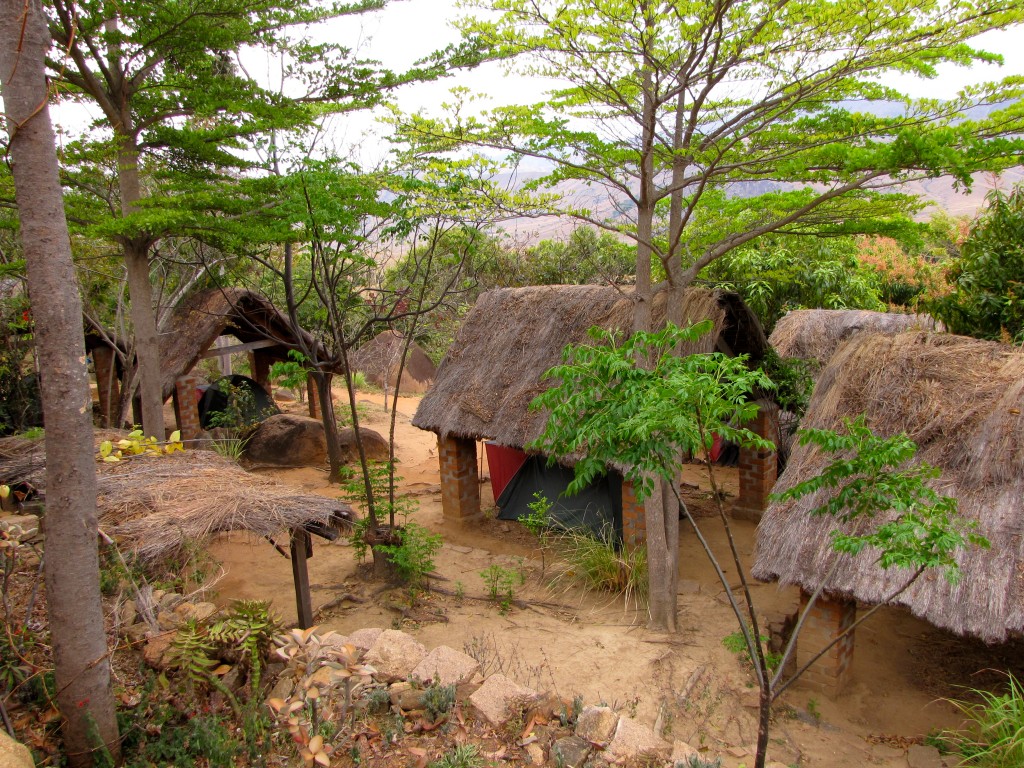 A view of tent shelters in Camp Catta (which also has cabins that are not visible here; Sept. 2011). 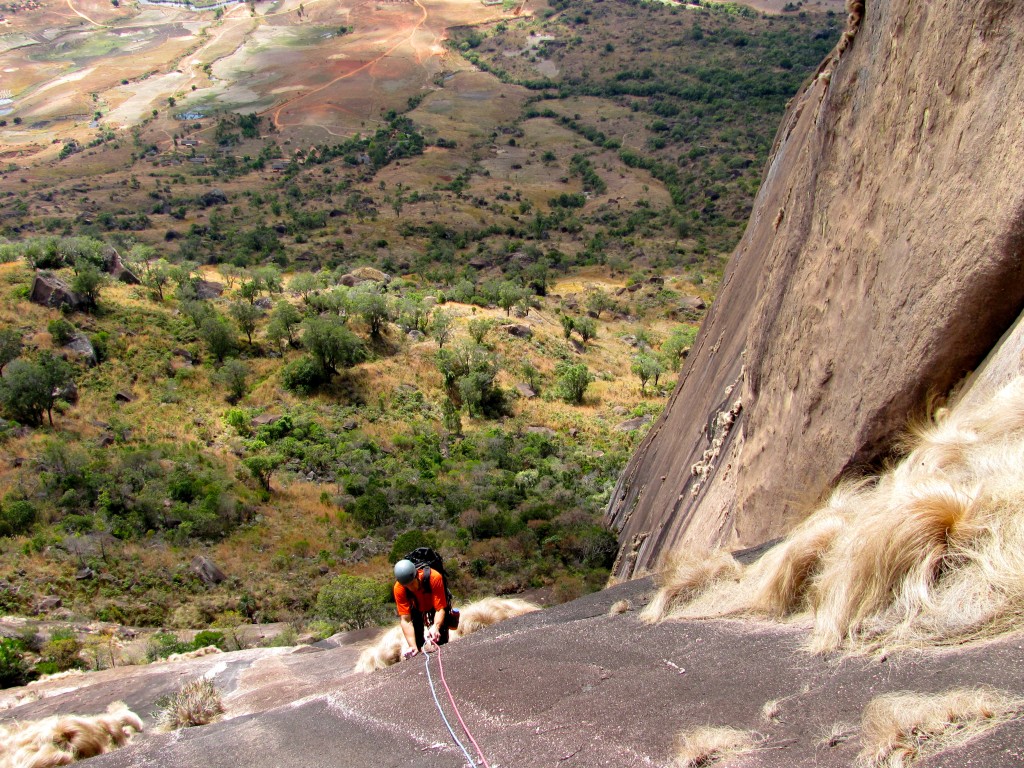 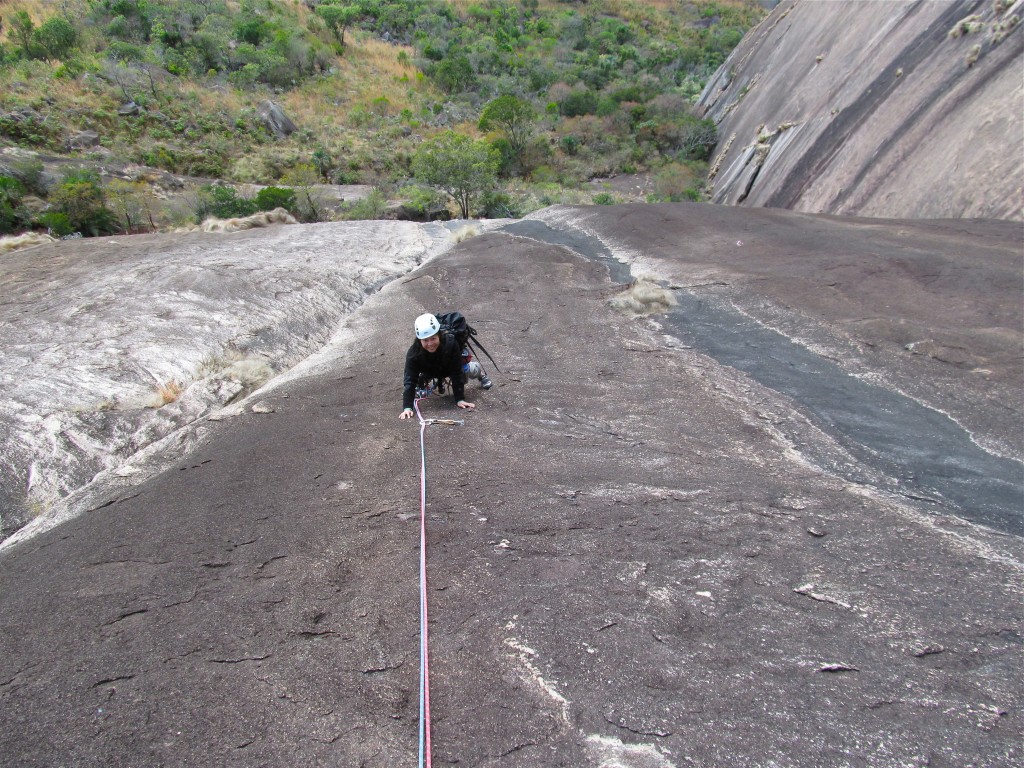 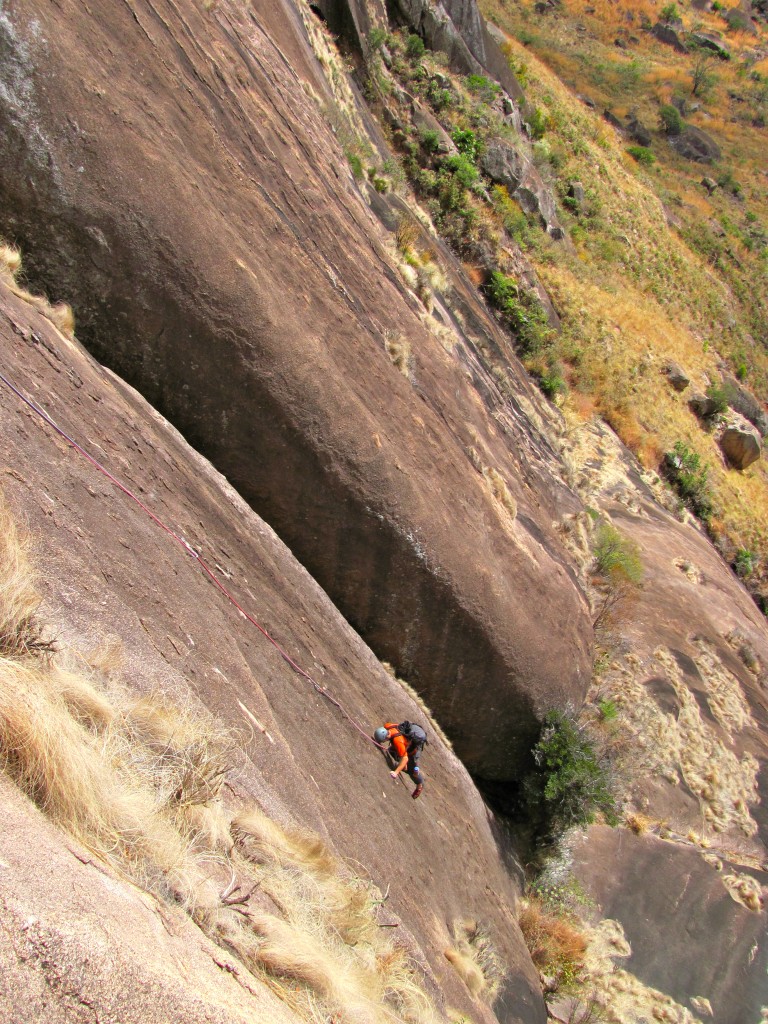 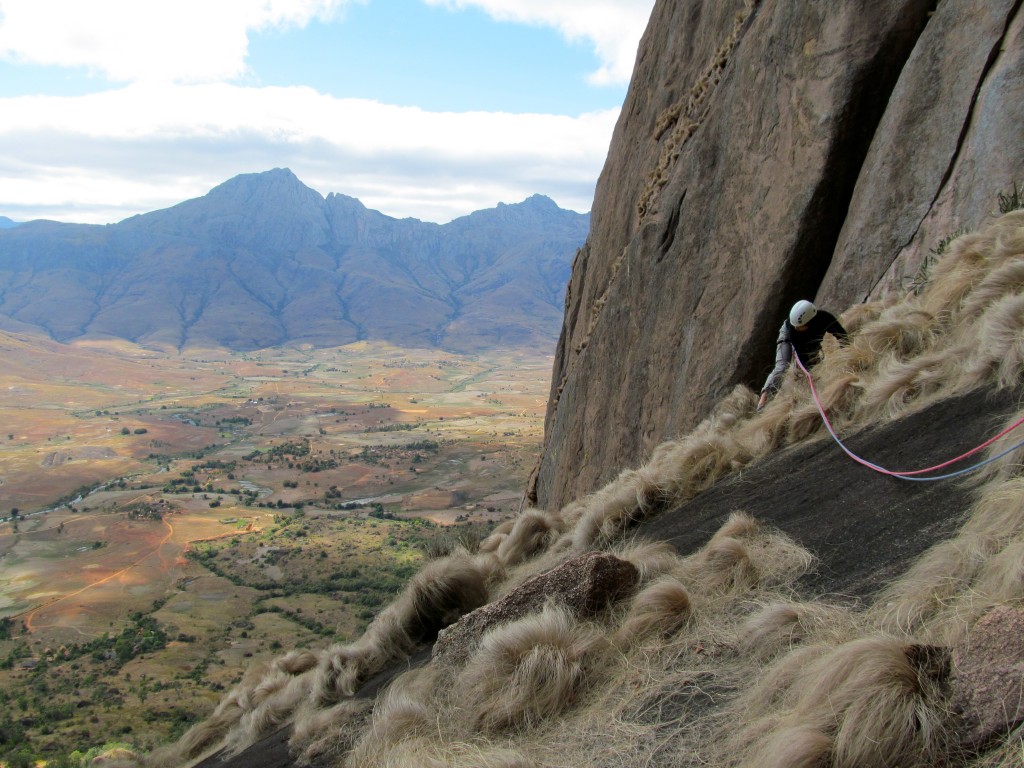 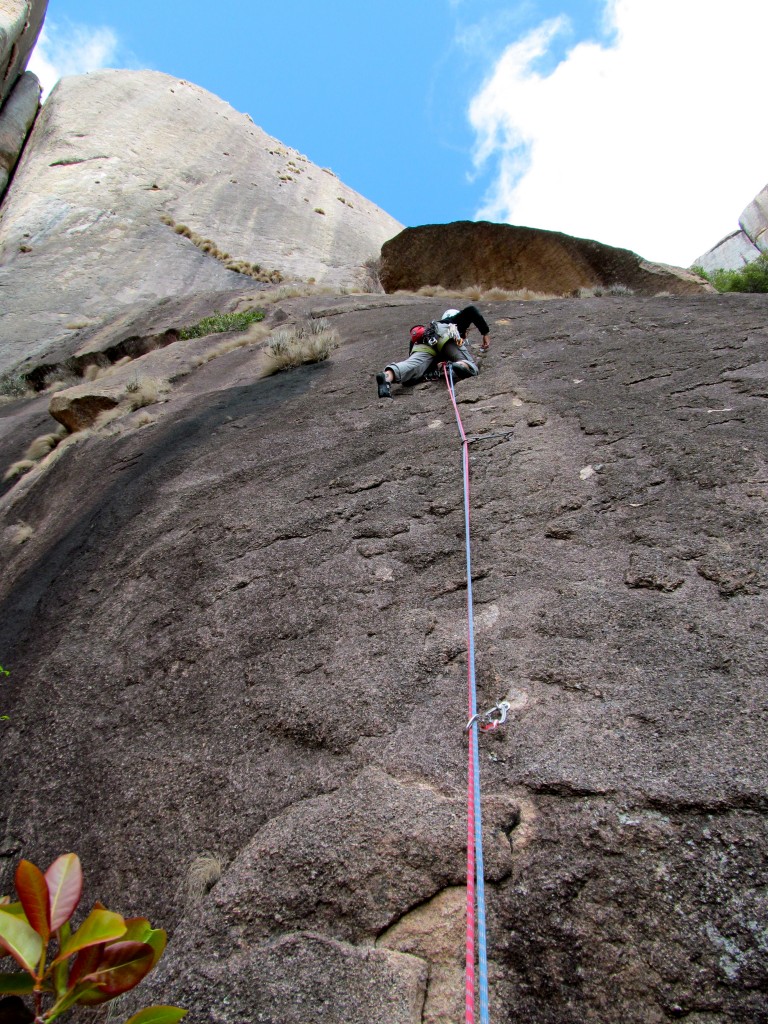 Shirley leading pitch 5 of Alien. This is the first of the steeper pitches above the apron and reminiscent of some Cochise face climbs (Sept. 2011). 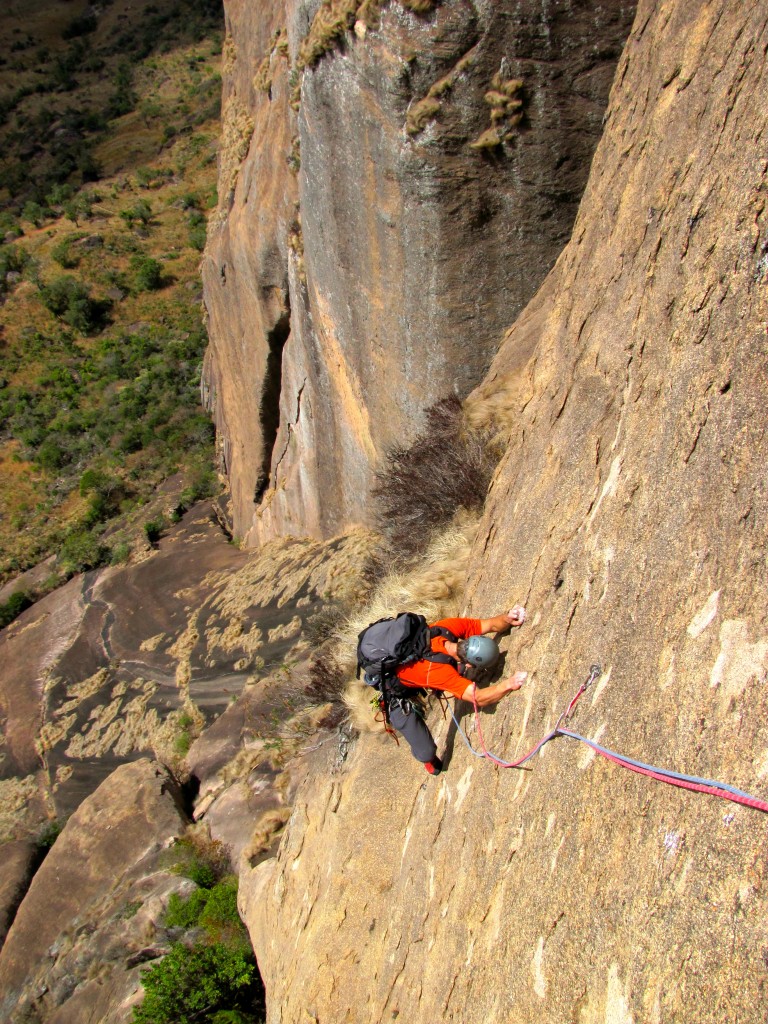 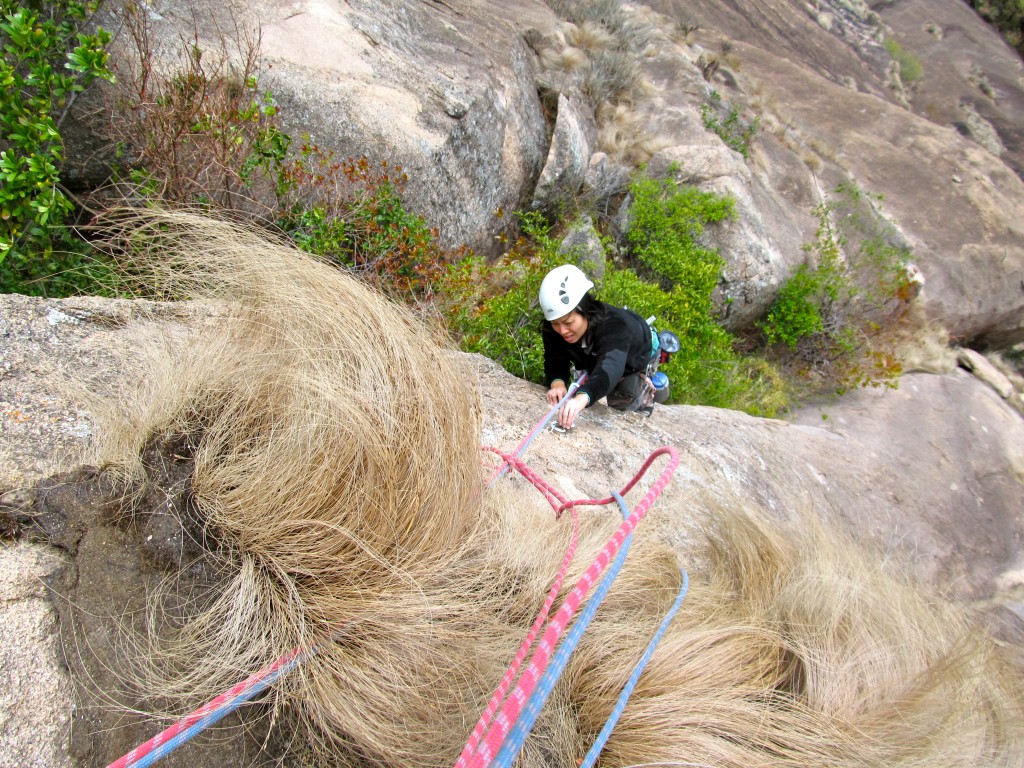 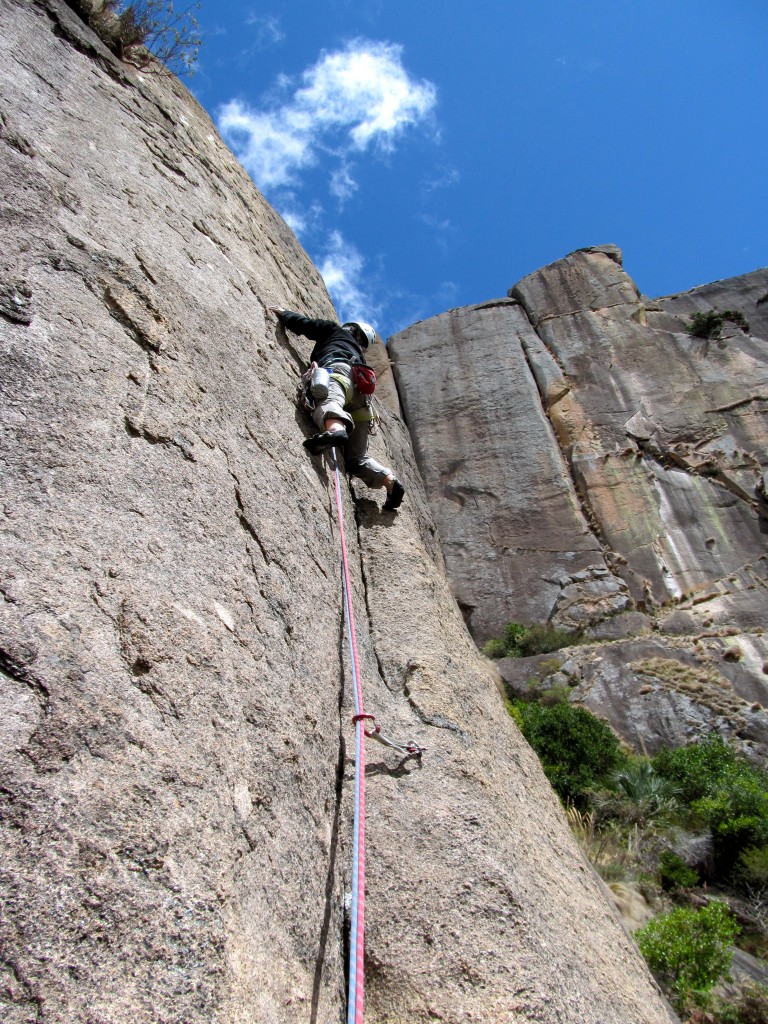 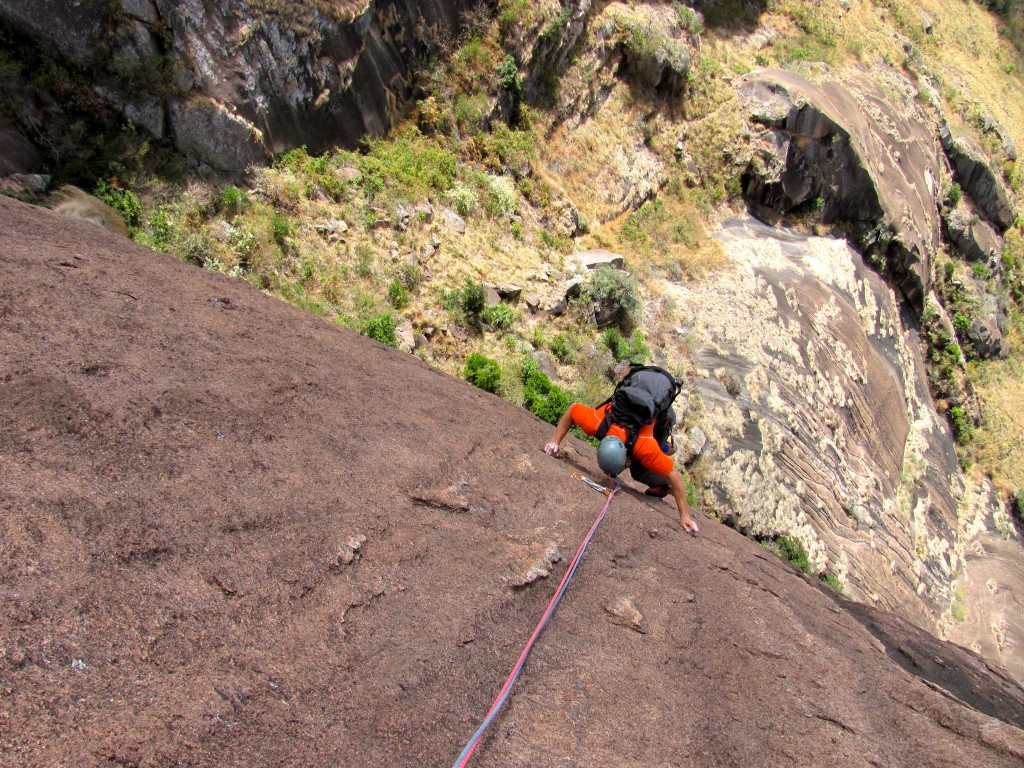 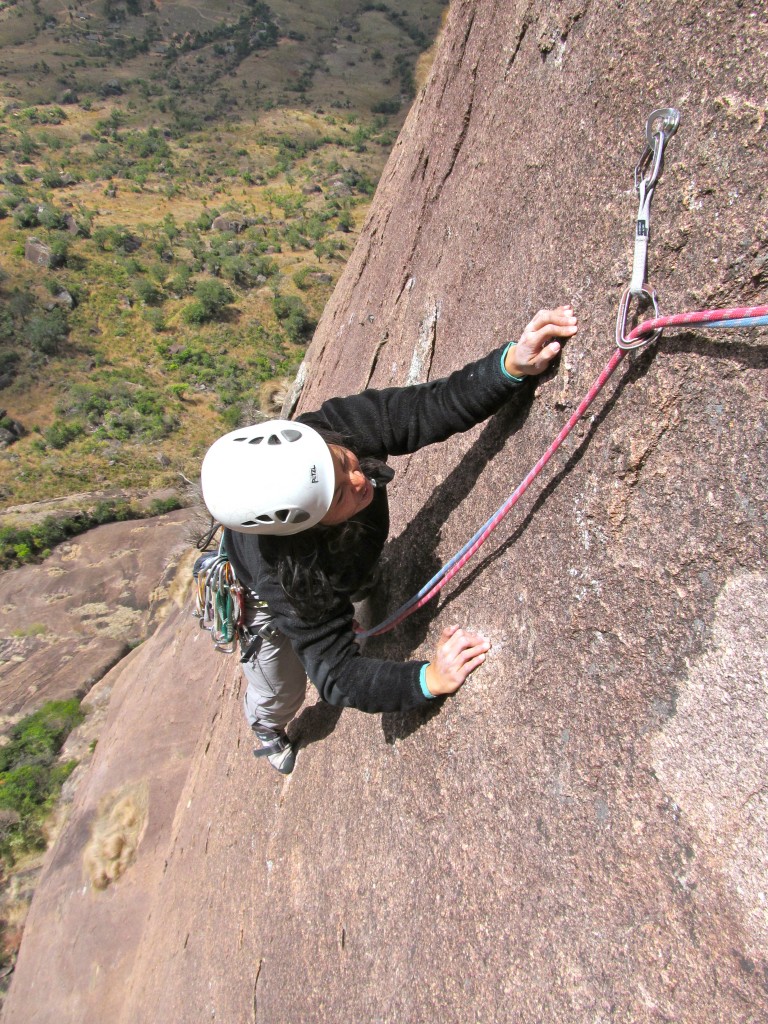 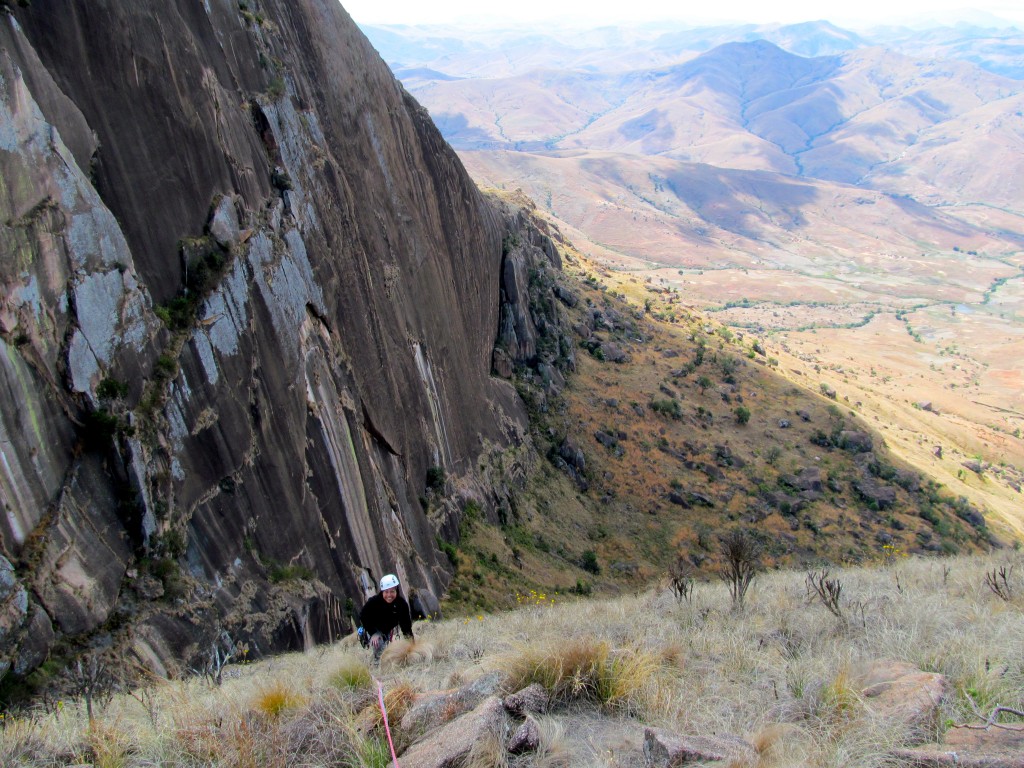 Shirley topping out on pitch 10 of Alien with the Lemur Wall visible on the left (Sept. 2011). 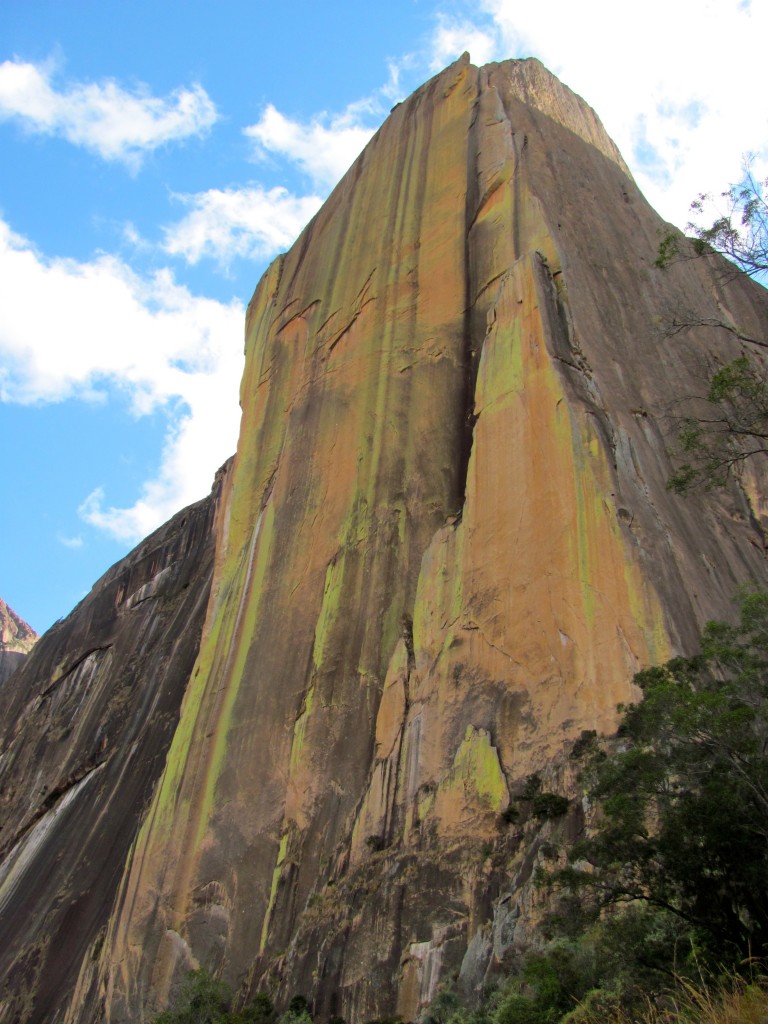 The amazing face of the Karambony Pillar, home to the Tough Enough route clocking in at 8c+ and 12 pitches long...Ondra's recent onsight (Sept. 2011). 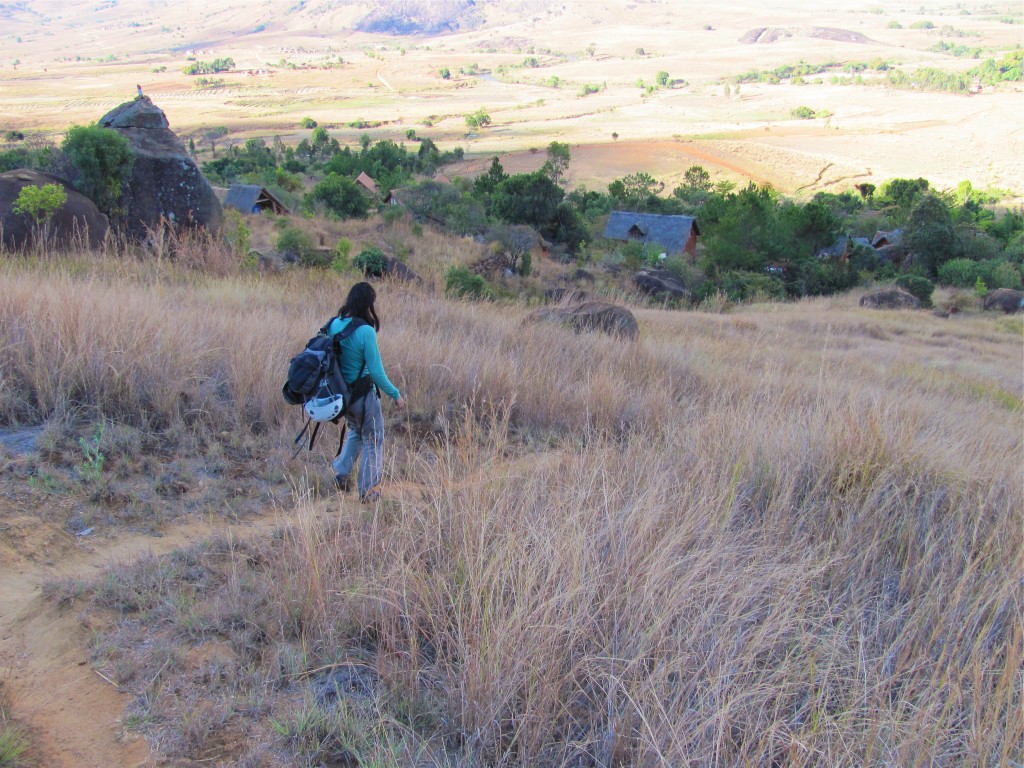 Shirley hiking back to Camp Catta (the huts in the photo) after our first climb in Madagascar (Sept. 2011).

Go to Part 3.
Go back to Madagascar page.