Go back to Morocco page.
Go back to l’Allumeur Du Reve Berbere page. 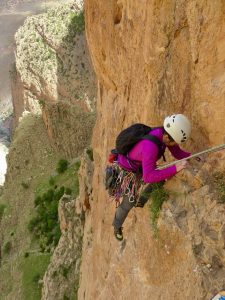 On our final day in Taghia, we hiked up to the base of the Taoujdad formation to try a newish route called El Geonauta, 7 pitches long and apparently with only one move of 6c (per our French companions from the gite). Once near the base, you climb up an easy approach ramp (same as for the classic route called Au Nom De La Reforme) and then rappel 7 meters and traverse to the start proper. The first pitch was an aesthetic 6b with about 2-bolts worth of very strenuous climbing – liebacks and underclings. Some A0 for me though Shirley had some (clean) fun on it. Pitch two was probably the highlight: you first tunnel and chimney your way through a nearly fully enclosed cave followed by some gymnastic moves on pockets (knee bars anyone?) and then face the blank looking 6c move. Here, an A0 tension traverse to the left got us through the difficulties. From there on, a handful of 6a and 6a+ pitches put us on the scenic summit of Taoujdad. I have to say that those upper pitches were probably the first time that we were having fun in Taghia – crimpy, vertical and without the weird sporto moves that we simply suck at. 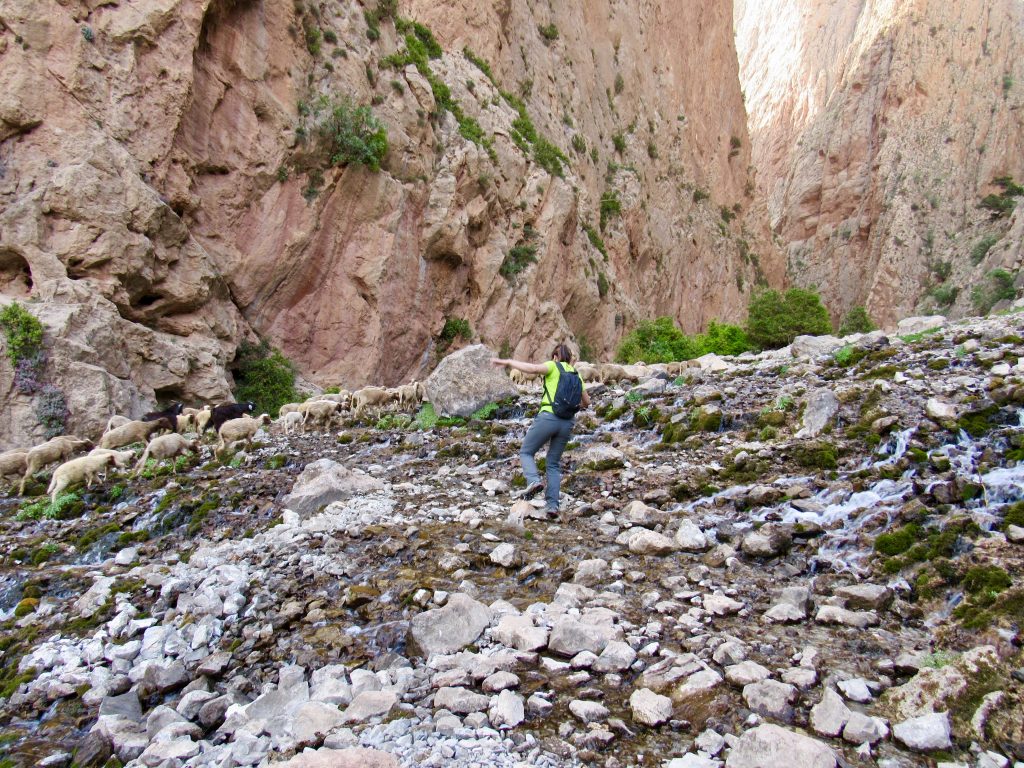 Shirley and some company on the hike up to El Geonauta route on Taoujdad. Click photo for a quick ambiance videos (May 2017). 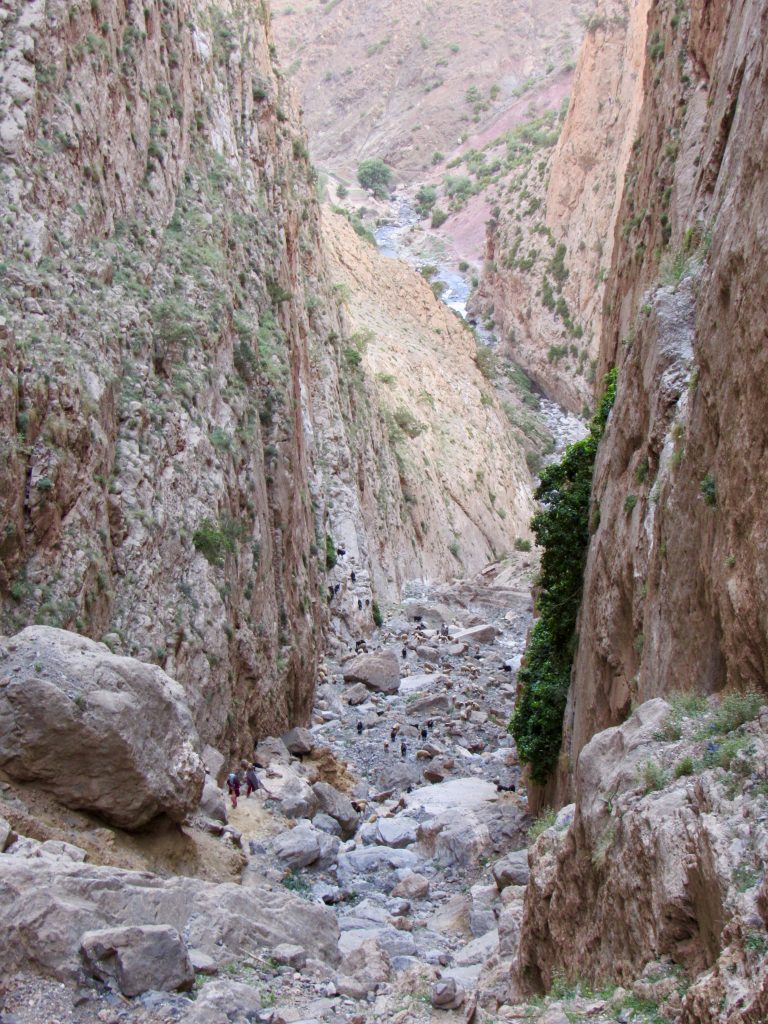 The herders and their goats accompanied us all the way up to (and past) the base of the climb. Make sure you stay above the goats on loose terrain (May 2017). 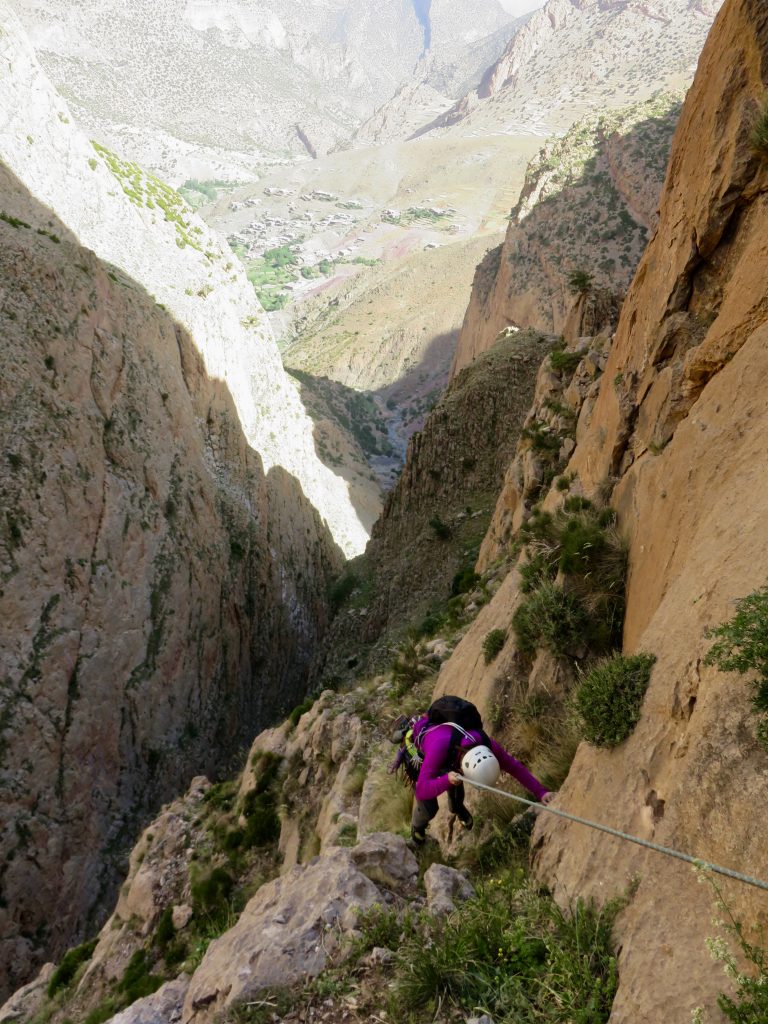 After an easy technical pitch, you need to rappel 7 meters and traverse some ledges to reach the start of El Geonauta on Taoujdad (May 2017). 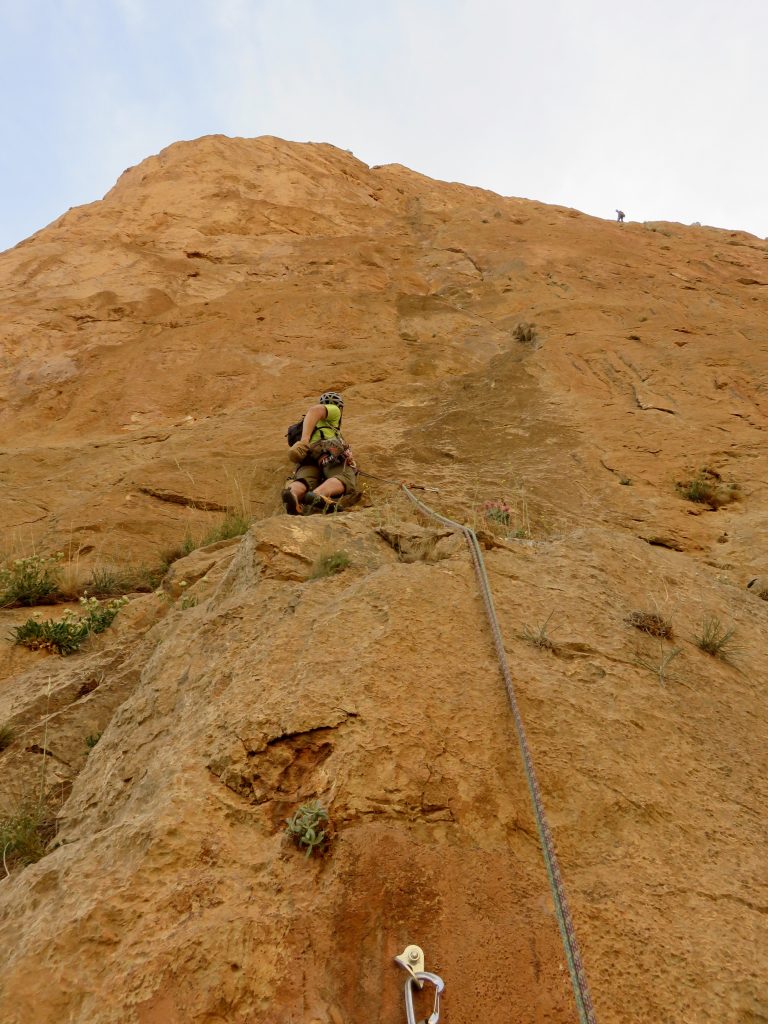 Starting up El Geonauta. This opening pitch was a pretty sustained 6b with a 2-bolts long section that was quite hard for me (May 2017). 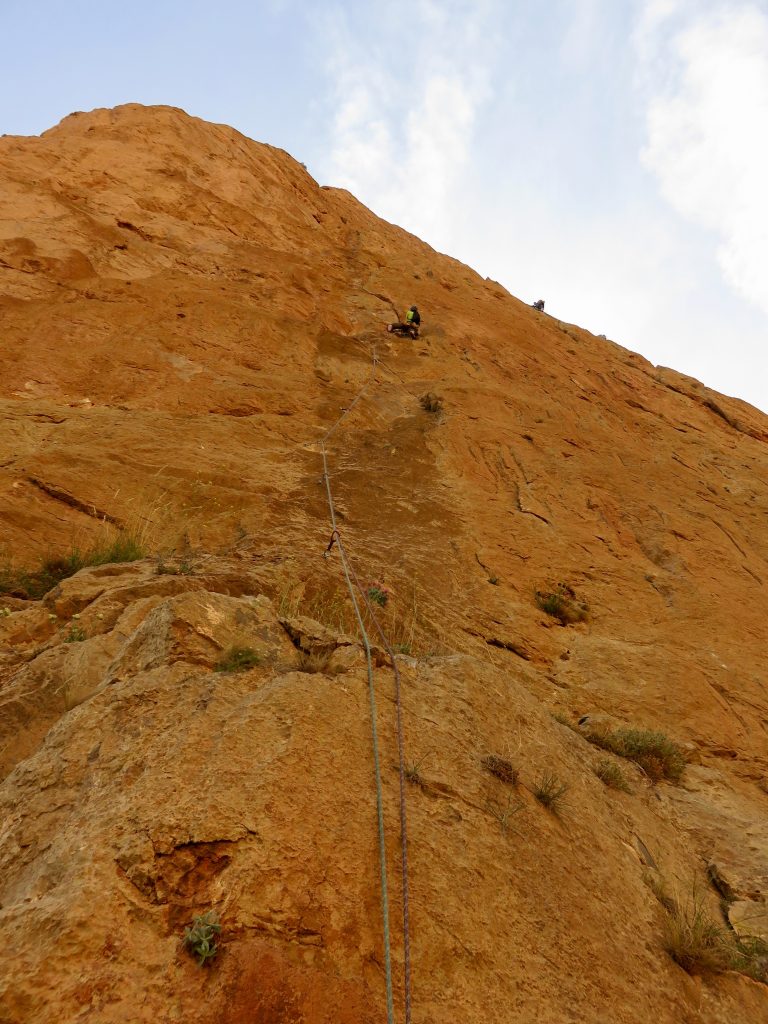 Approaching the crux of the opening pitch (May 2017). 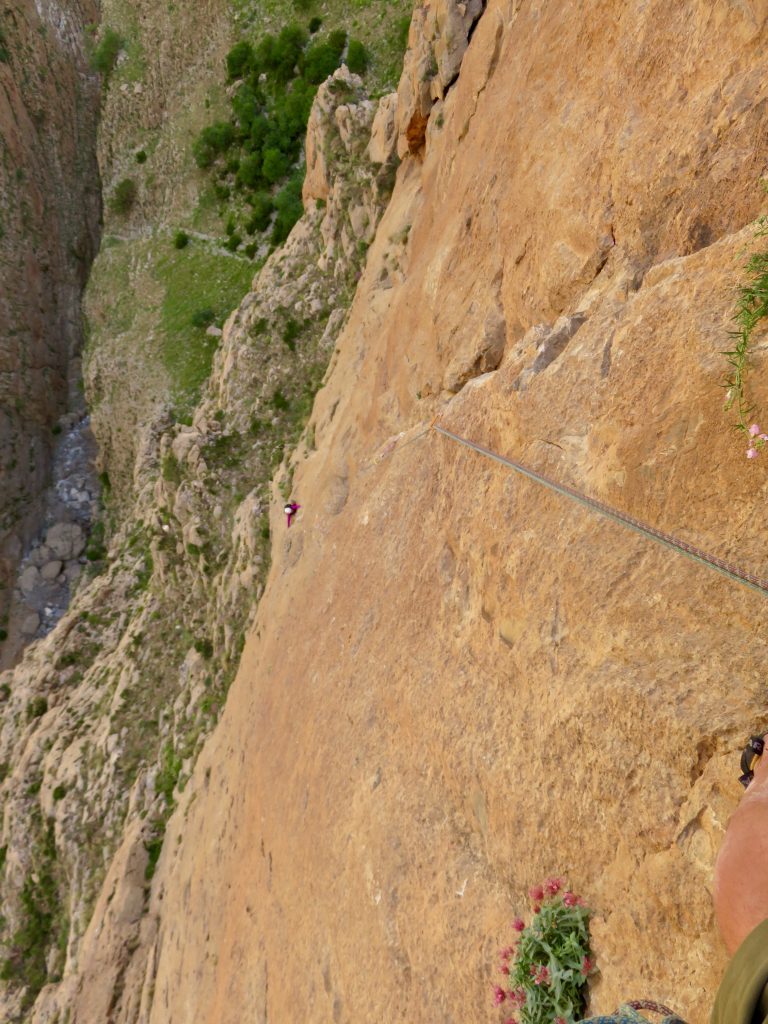 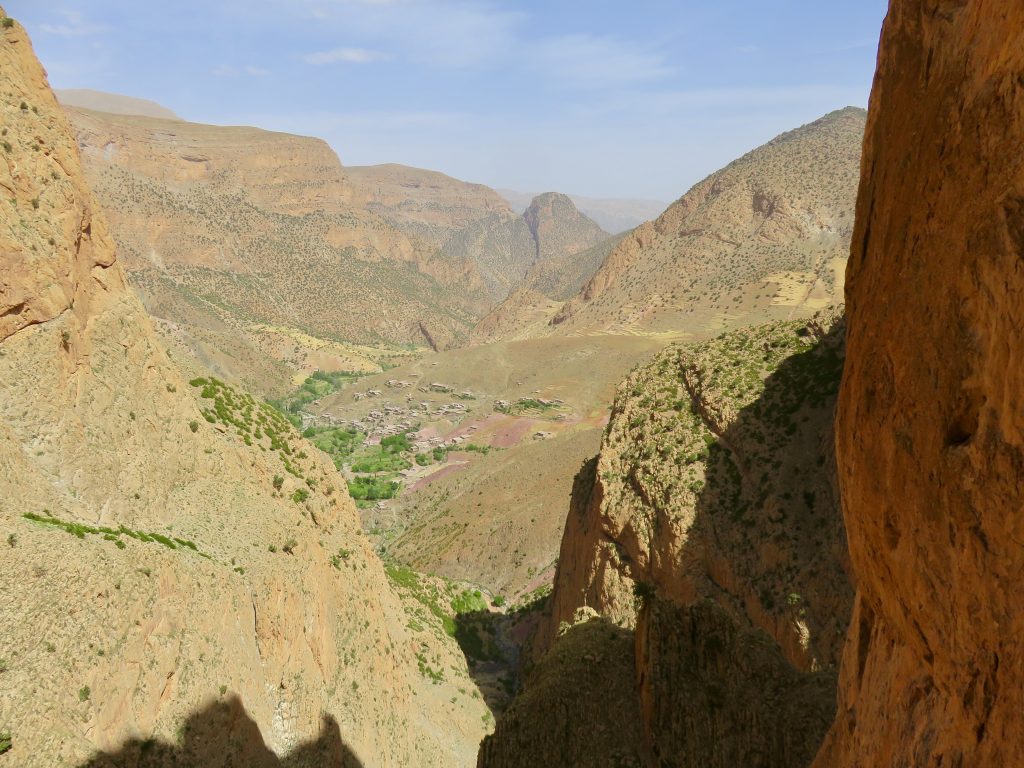 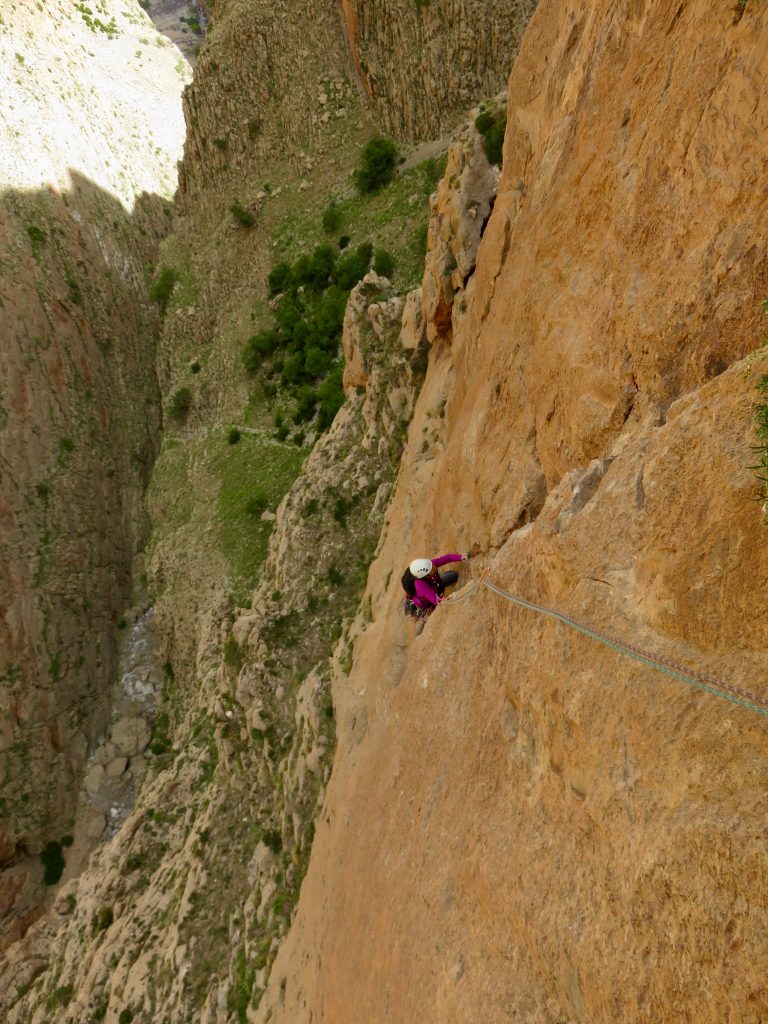 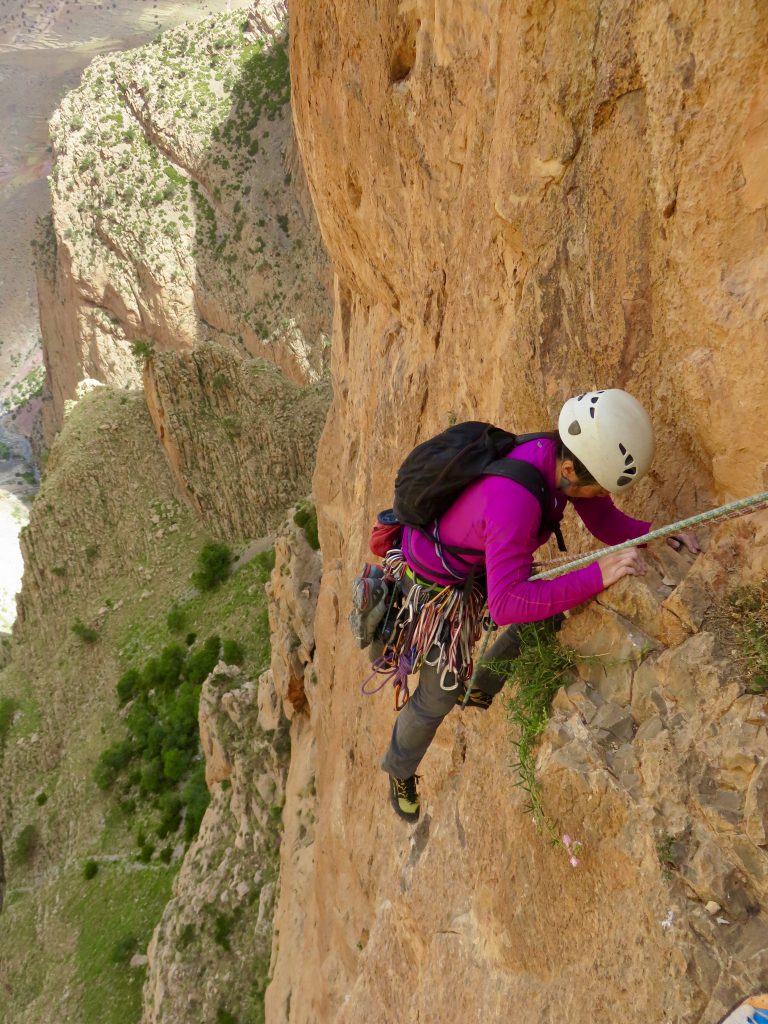 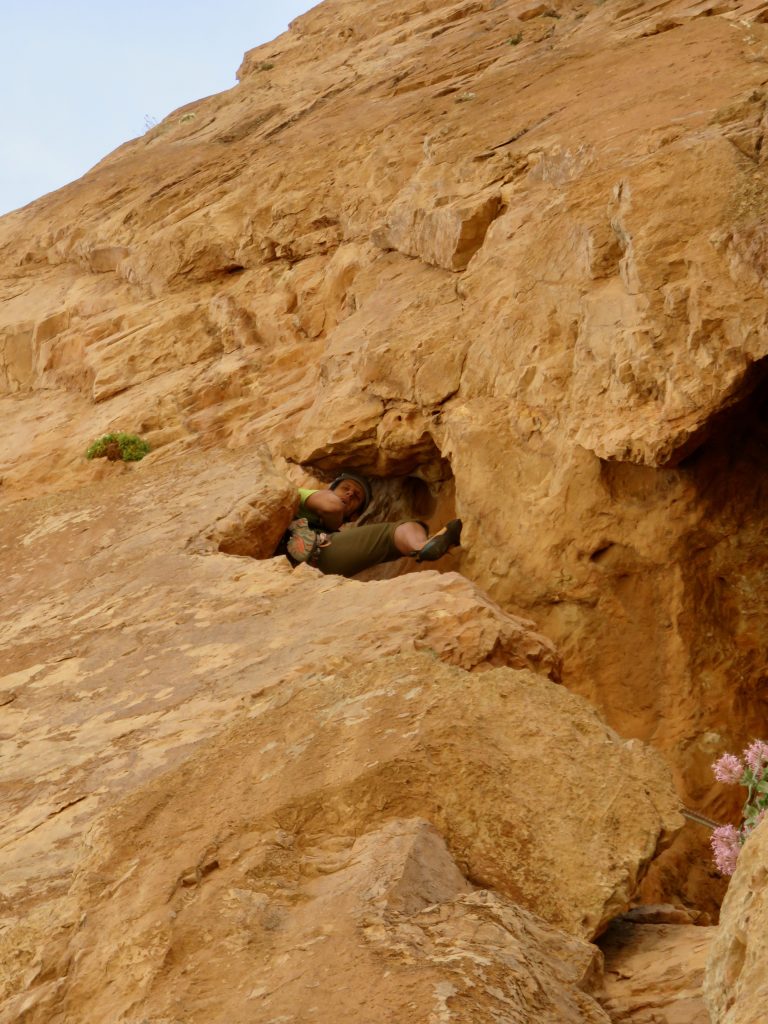 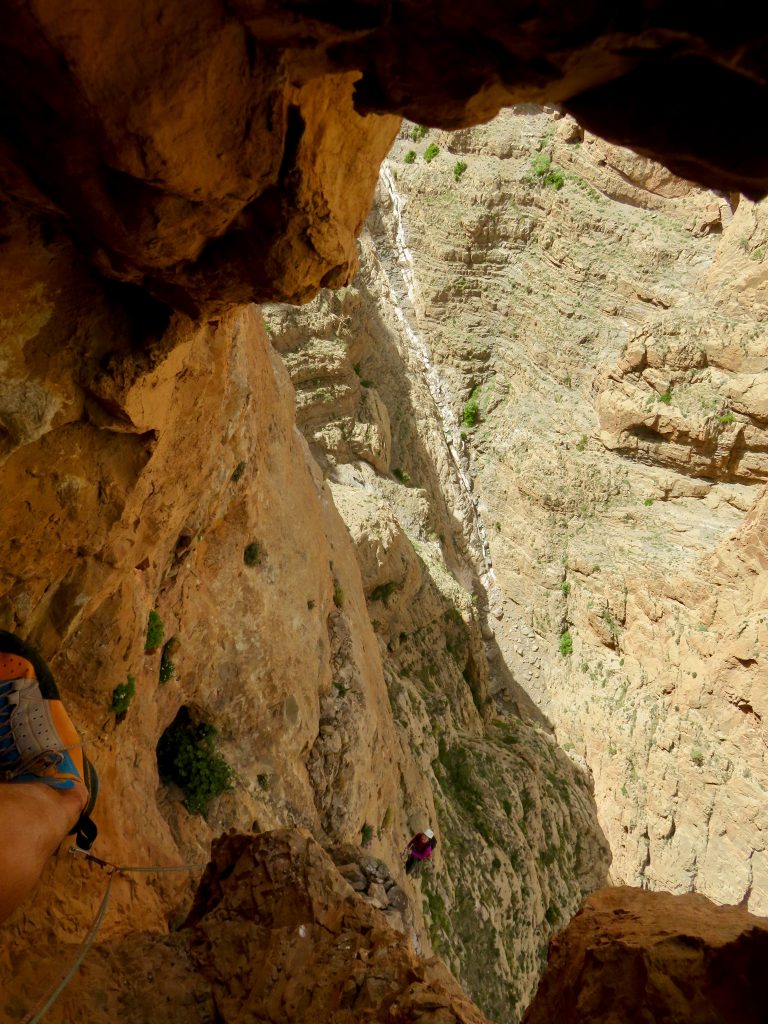 Looking back at Shirley from the cave (well, nearly a cave) on pitch 2 of El Geonauta (May 2017). 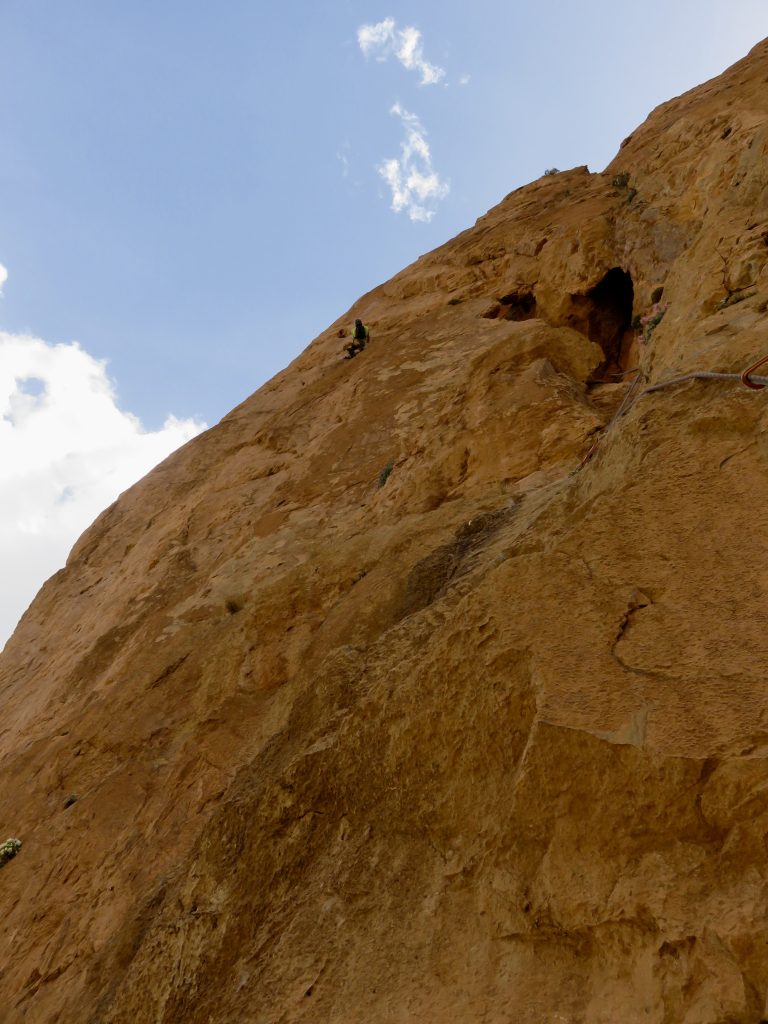 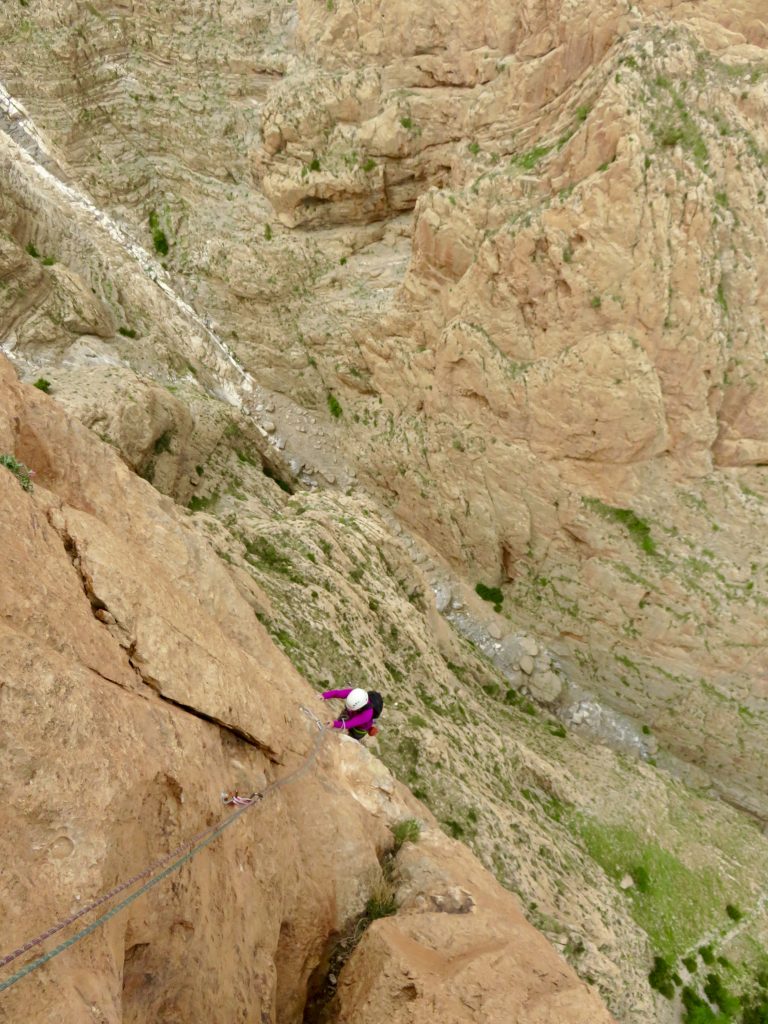 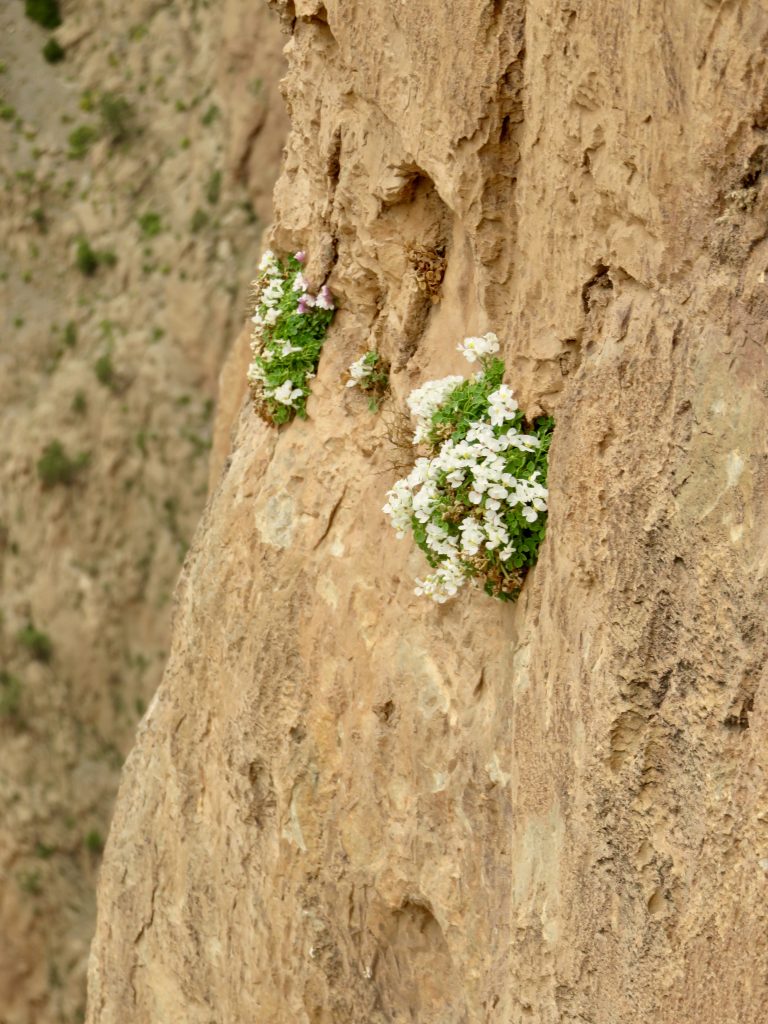 Pretty limestone with some pretty flowers (May 2017). 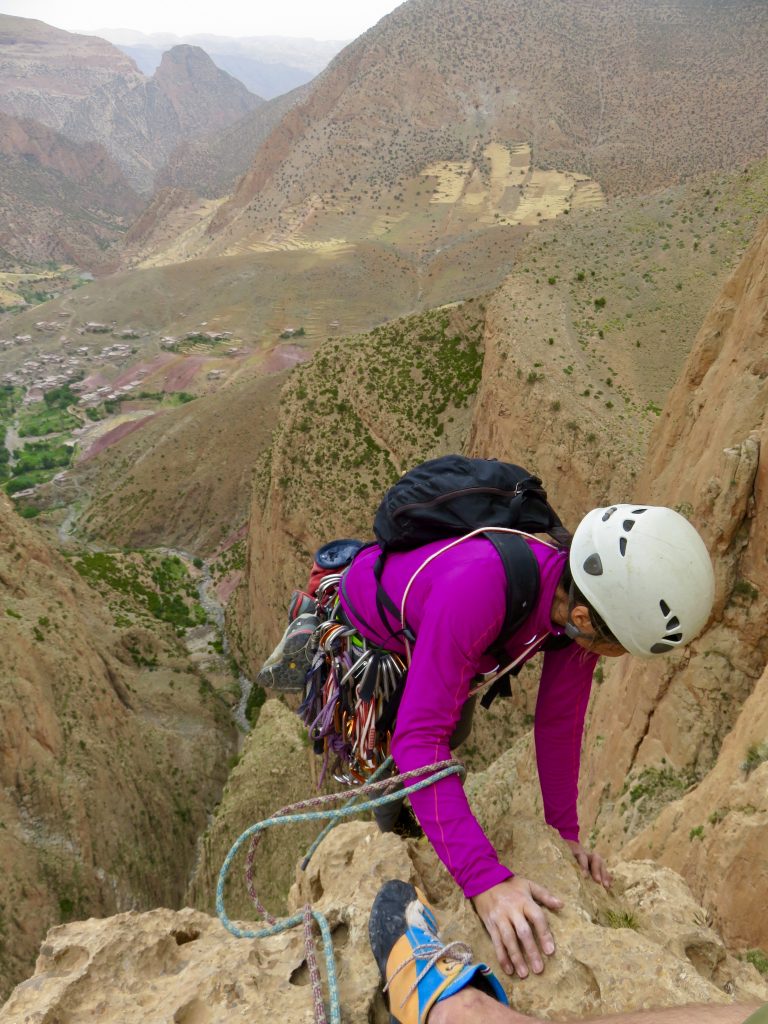 Shirley topping out on pitch 3 with the village visible below (May 2017). 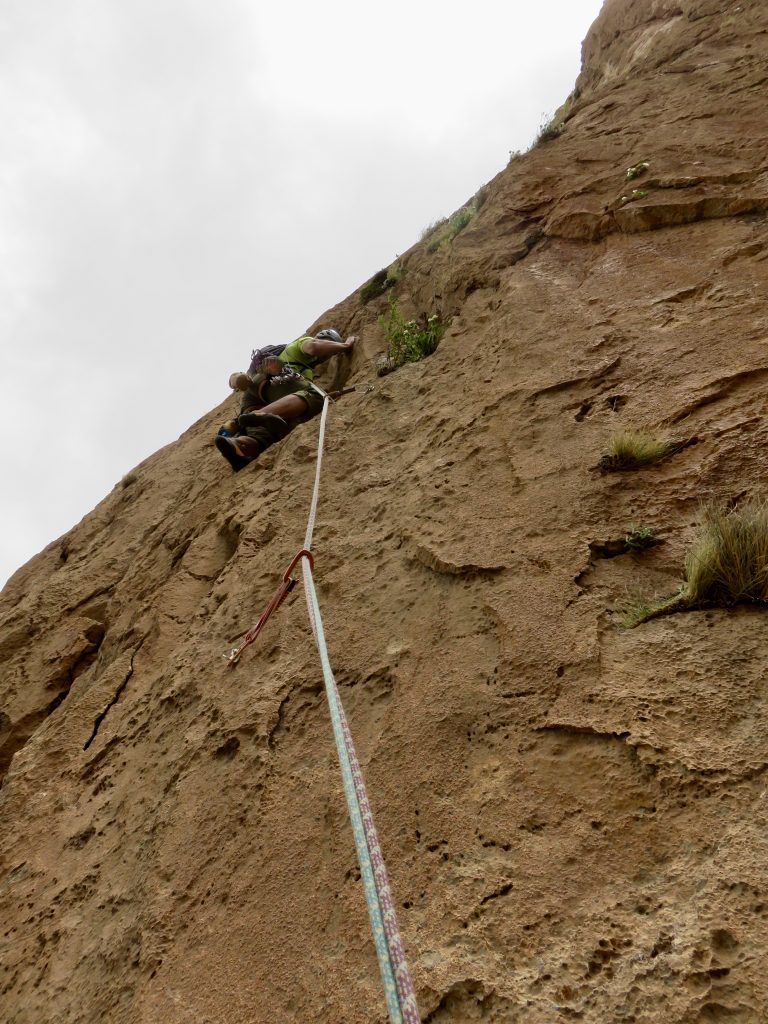 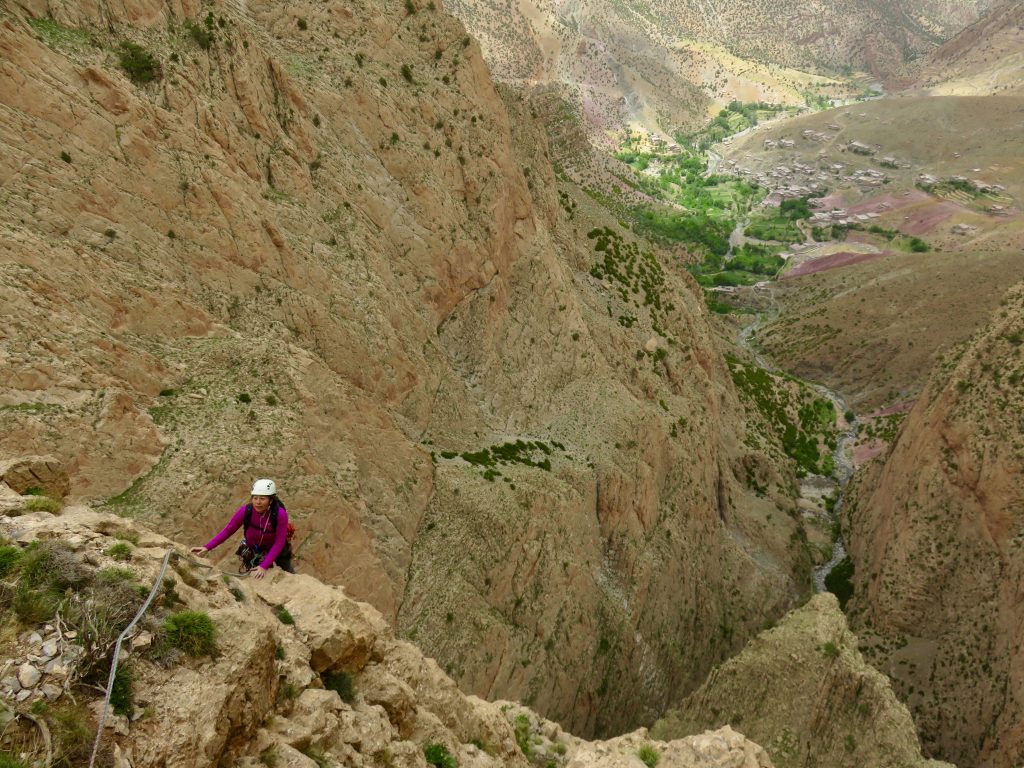 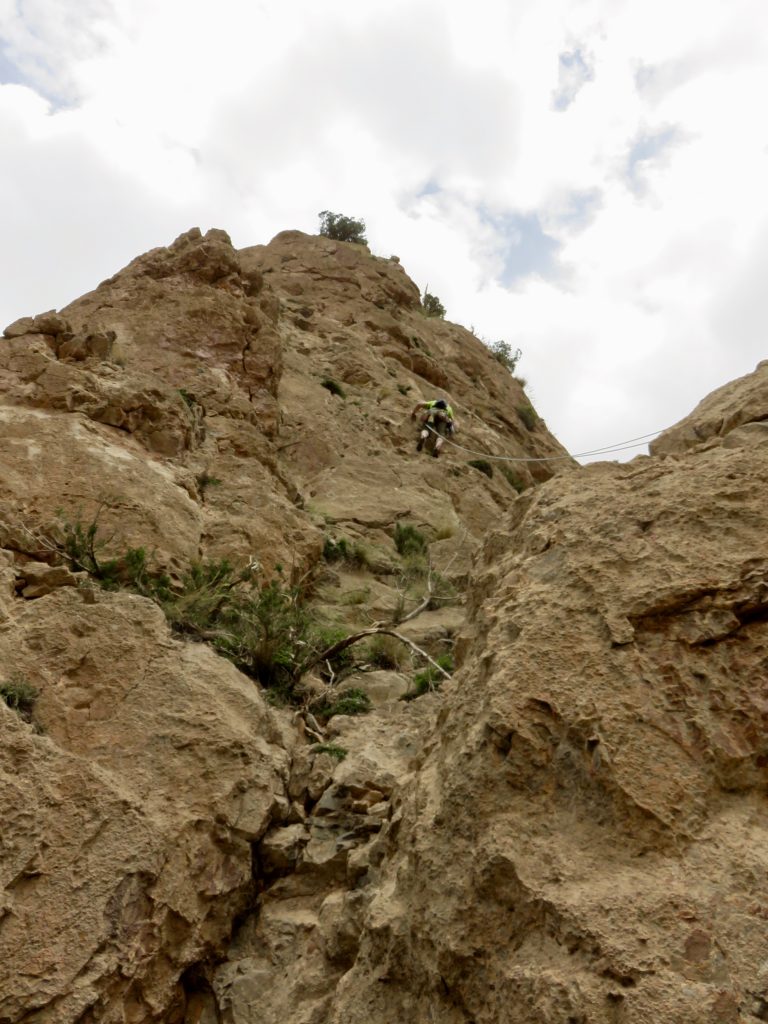 Leading the final pitch of El Geonauta to the summit of Taoujdad (May 2017). 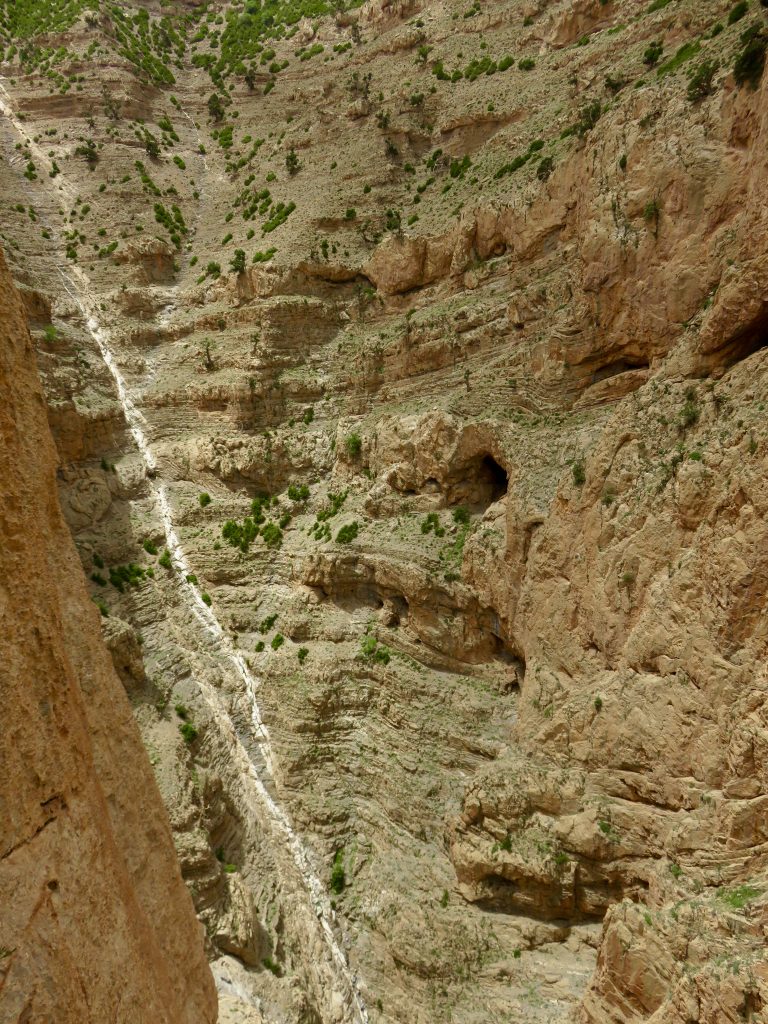 View up canyon – this is also part of the descent from the summit (May 2017). 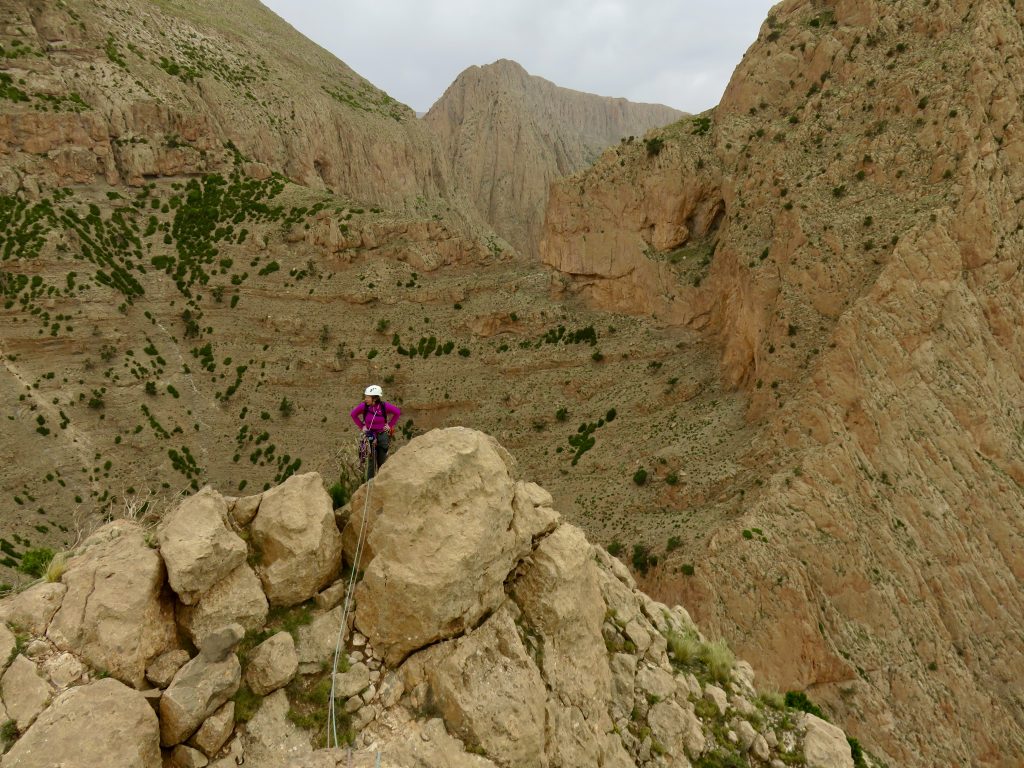 Shirley arriving on the summit of Taoujdad (May 2017). 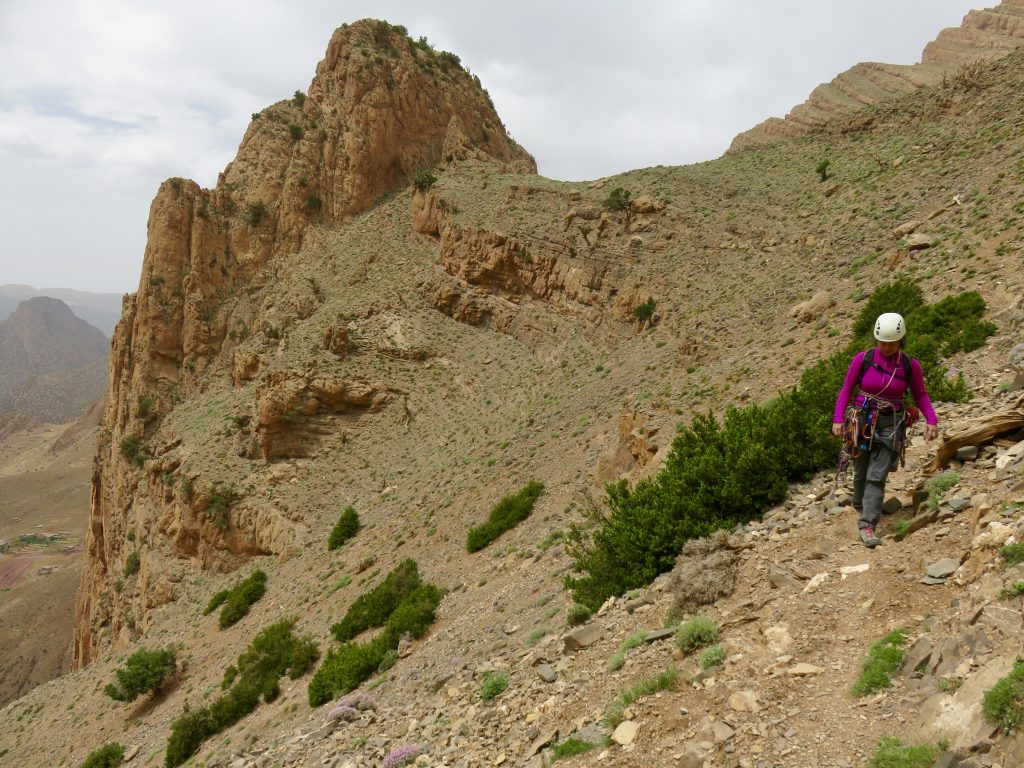 After one rap off the summit of Taoujdad, there’s a traverse to the head of the gully followed by a long scramble down the gully (May 2017). 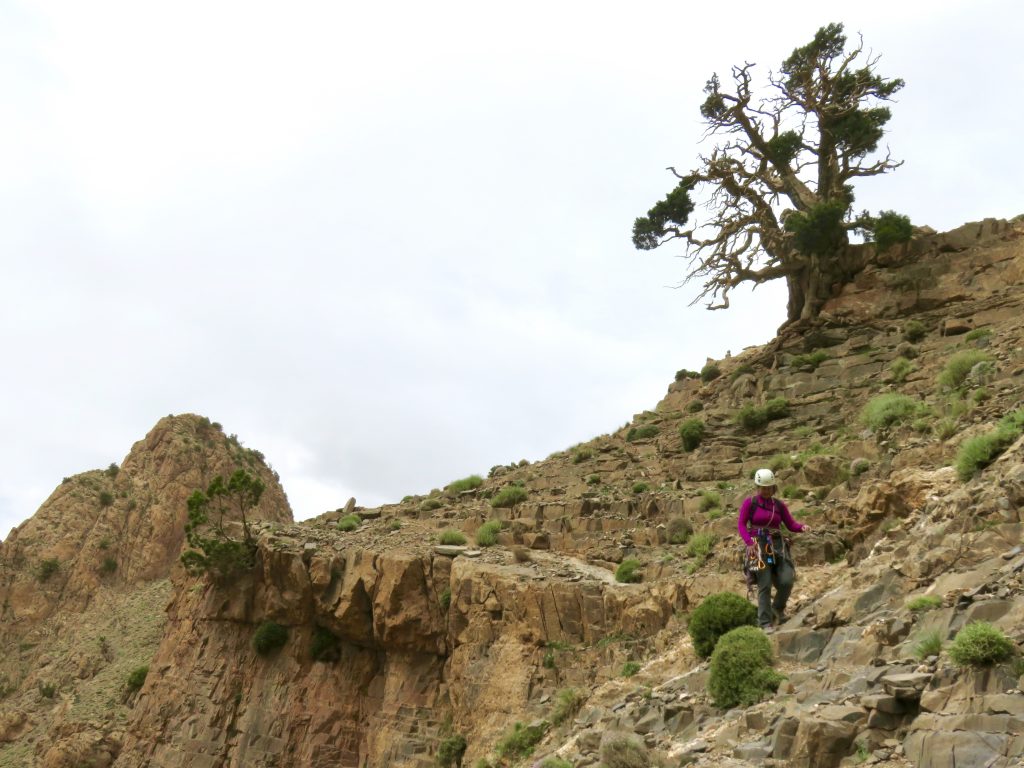 Interesting trees that dominate the flora of the high country above Taghia (May 2017). 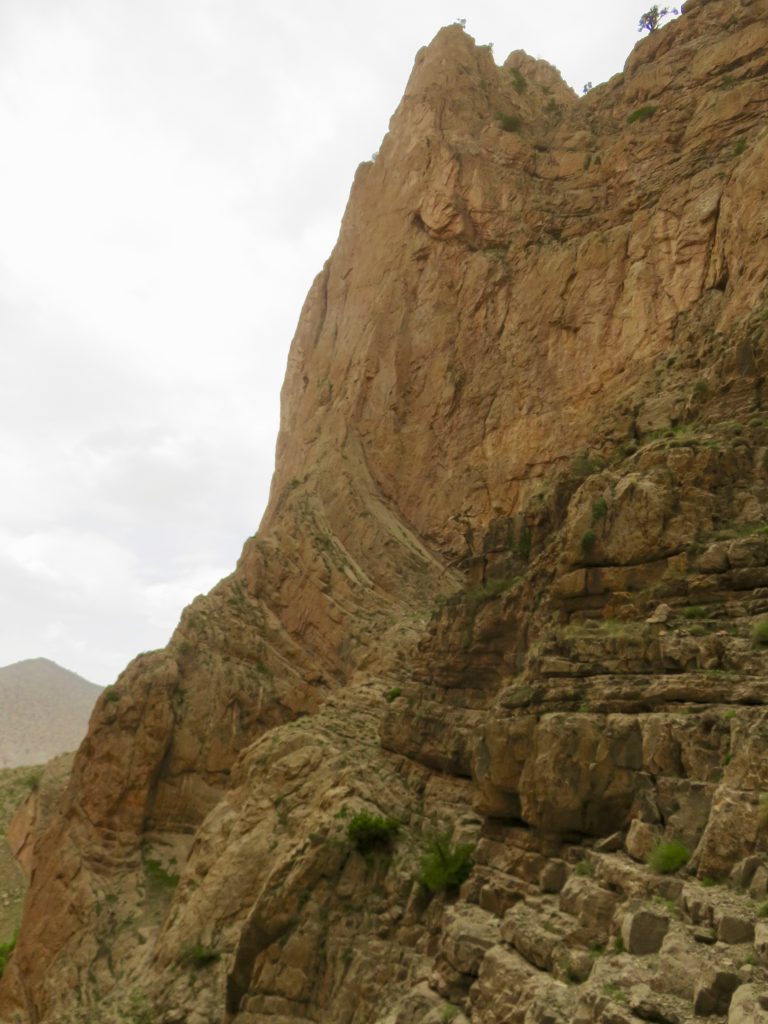 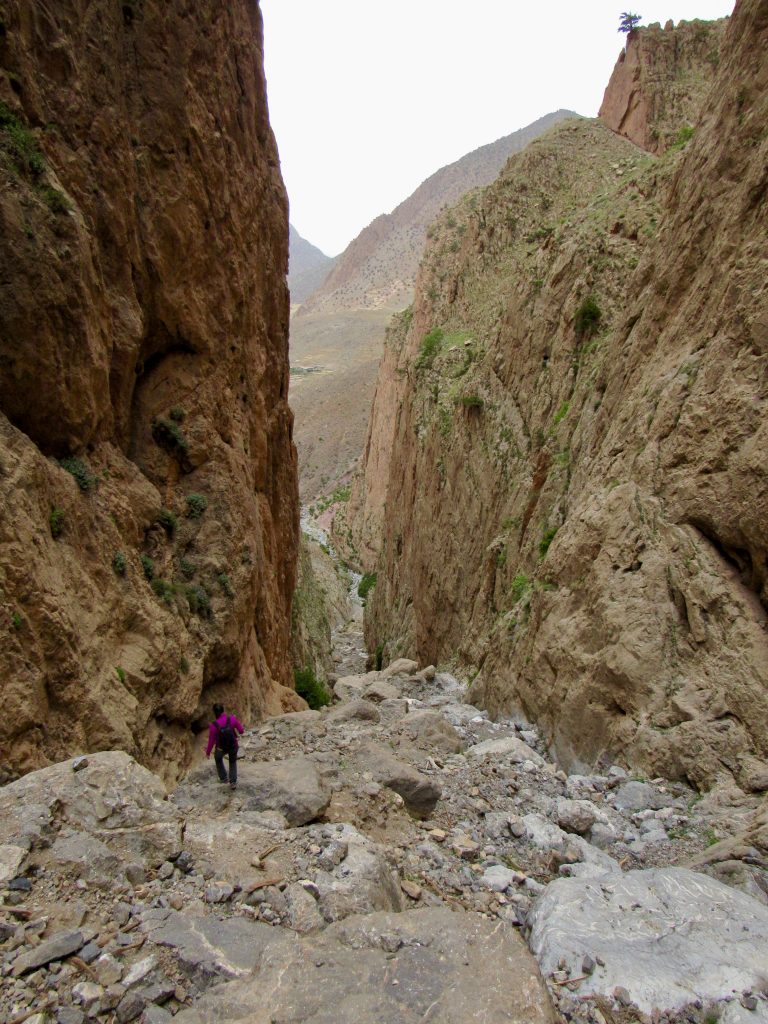 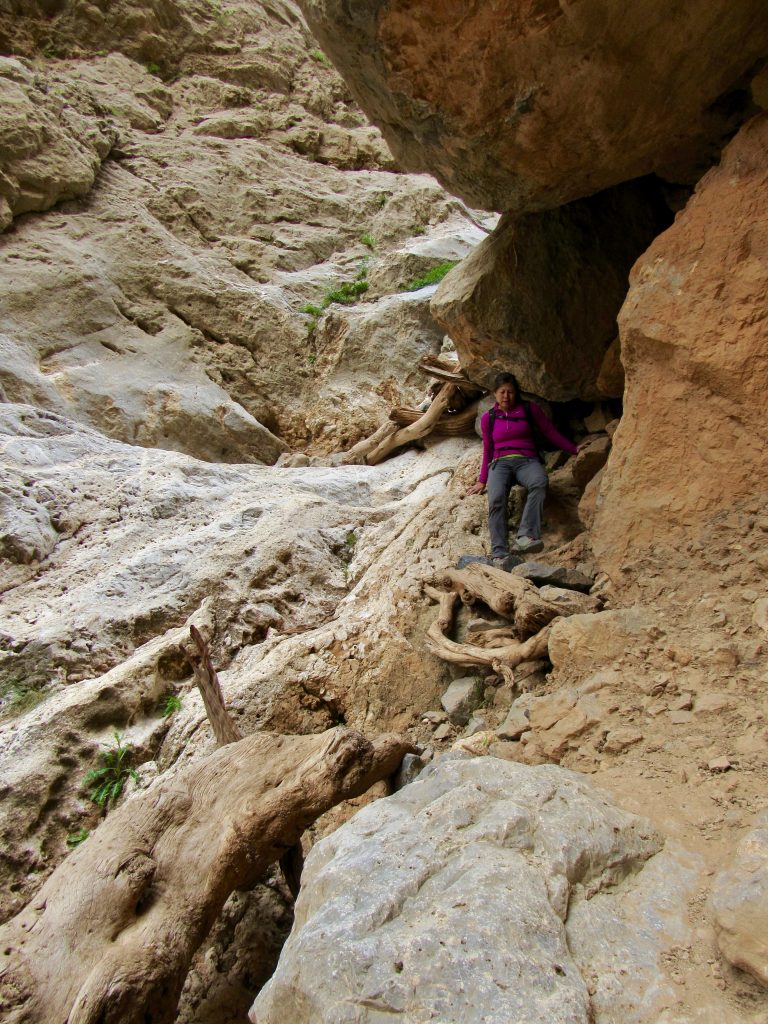 More Berber civil engineering in the descent gully – actively used by the goats and their human herders (May 2017). 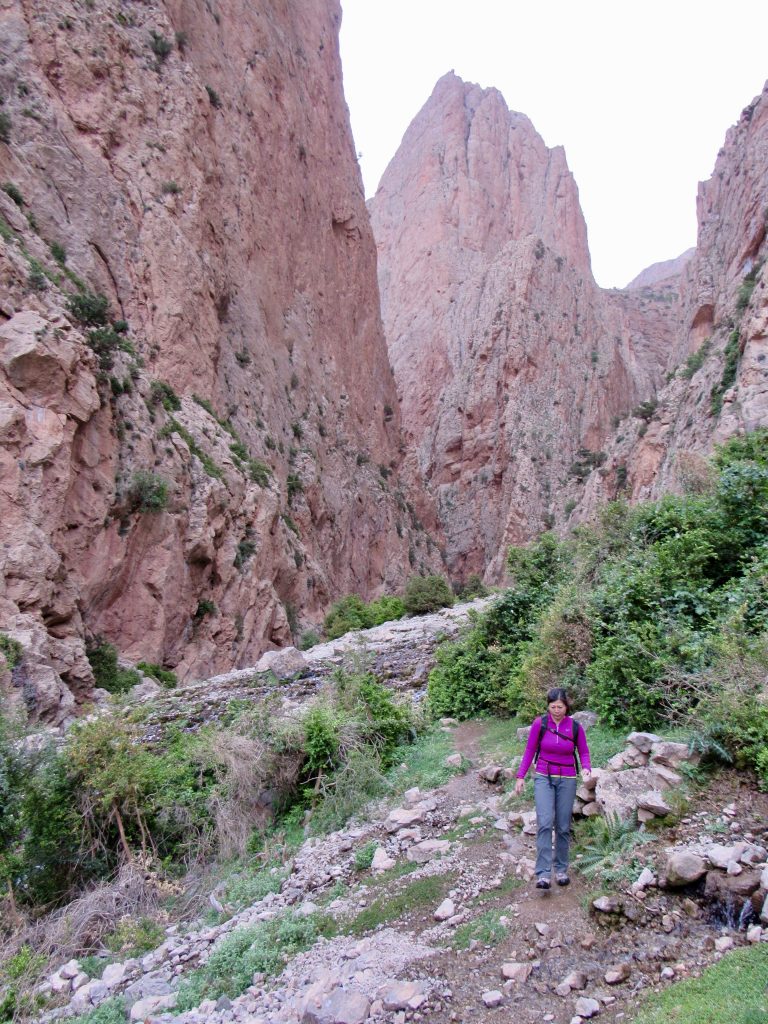 Back to the barn with Taoujdad in the background (May 2017). 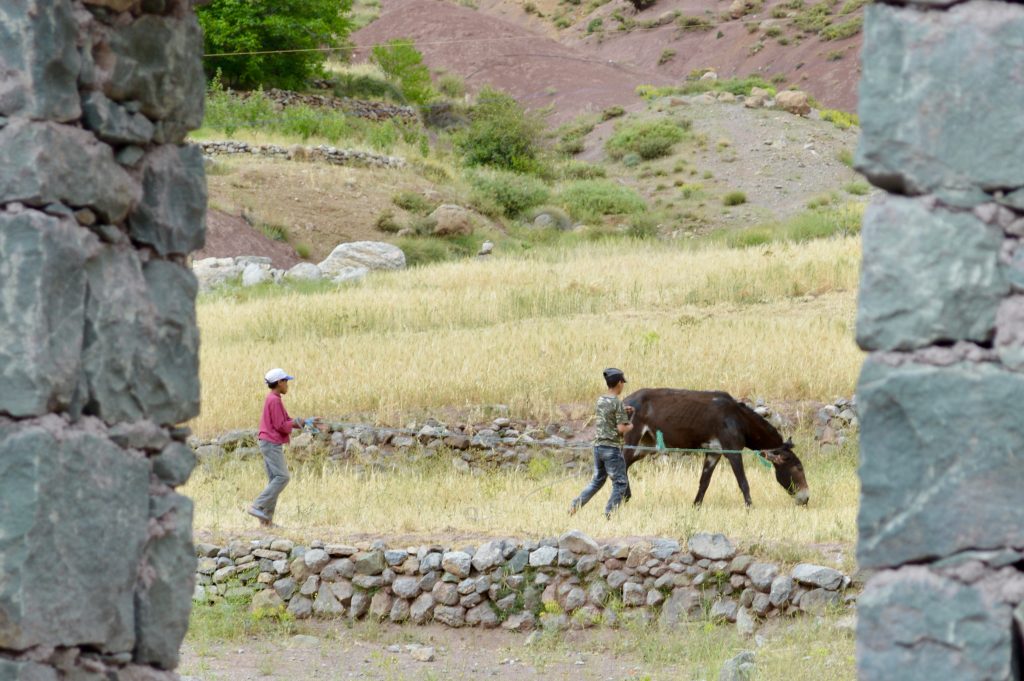 Go to Across The Atlas page.
Go back to Morocco page.