Go back to Mexico Road Trip.
Go back to La Tanda. 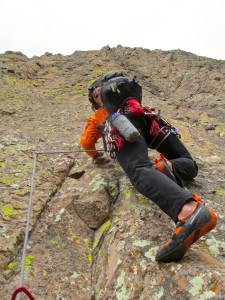 A four hour drive that afternoon and evening put us in the village of Bernal in the state of Queretaro, northwest of Mexico City. This is another pueblo magico whose main claim to fame is its scenic location at the foot of Pena de Bernal, a ~350 meter monolith of rock sprouting out of the rolling terrain. We wandered the cobbled and foggy streets of Bernal till late in the evening trying in vain to catch a glimpse of Pena’s dark outline. A cold, wet and foggy morning followed with no views of Pena. Finally around noon the wind picked up and began to drive the drizzle and the fog away and we got our first view of the formation. Grabbed gear and hiked up ~25 minutes to the base of the route…only to find a party already on it. Four or five routes climb the steep side wall of a ridge (which itself is traversed by the classic Bernalina, a 5.8 line) for 3-4 pitches before merging together with Bernalina for the final two long pitches to the summit. The climbing on those opening pitches was fantastic! The rock is volcanic – a bit like the more solid stuff at Smith – and the face climbing proceeds on nice and sharp crimps for fingers and grippy facets for feet. After the initial four pitches of Horizonte De Estrellas (5.10b), we joined Bernalina and our climbing neighbors: Ben from Quebec (first non-Spanish speaker we’d encounter till EPC) and his guide Carlos from Queretaro. Quick and easy descent including a couple raps and soon the four of us were tossing down large Victorias and tasty gorditas (a specialty of the village) and shooting the shit about climbing in Mexico . 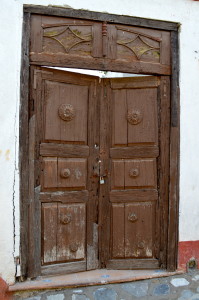 Our place in Bernal, Casa Tio Camilo, was a two-room hotel with not a soul anywhere on the premises. A woman let us in on the first night and then disappeared. Two older ladies would show up at 9 on both mornings, cook us breakfast and then too disappear. Though we do think we saw someone briefly move the curtain in the room below us we can’t be sure – not a peep was heard otherwise. It took some doing for one of the breakfast ladies to finally take our pesos and let us settle the bill before taking off early in the morning on the third day. Bizarre and beautiful place with great views of Pena – highly recommended. 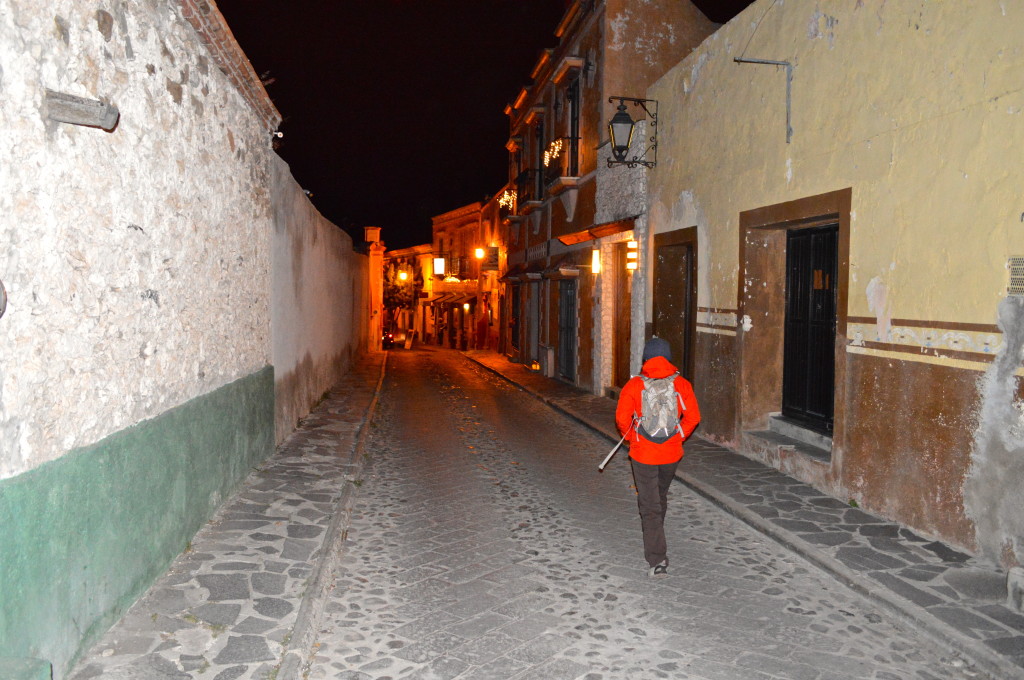 Our first evening in Bernal in the state of Queretaro. It took us a while to find the hotel we had reserved…drove and walked right by it several times but apparently the only marker was a Times New Roman font size 12 sign on a huge solid gate in an otherwise blank building wall. Looking for some food late on Christmas Eve here (Dec. 2013). 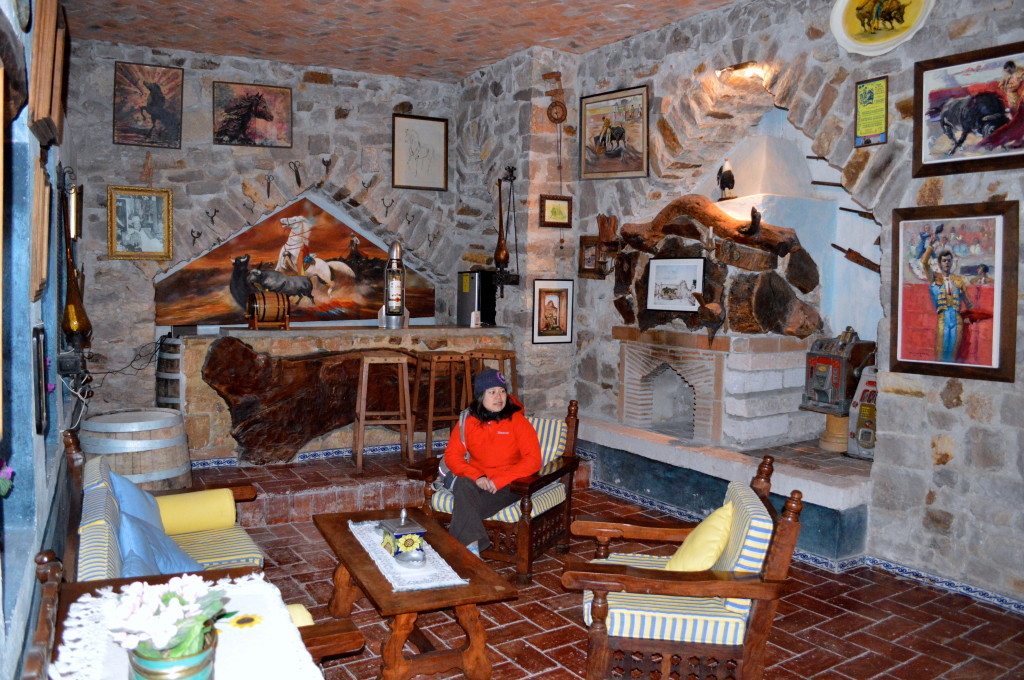 Casa Tio Camilo in Bernal…the ghost hotel. We were the only guests and except for 20 minutes per day when two women would cook us breakfast we were completely alone (or were we…). 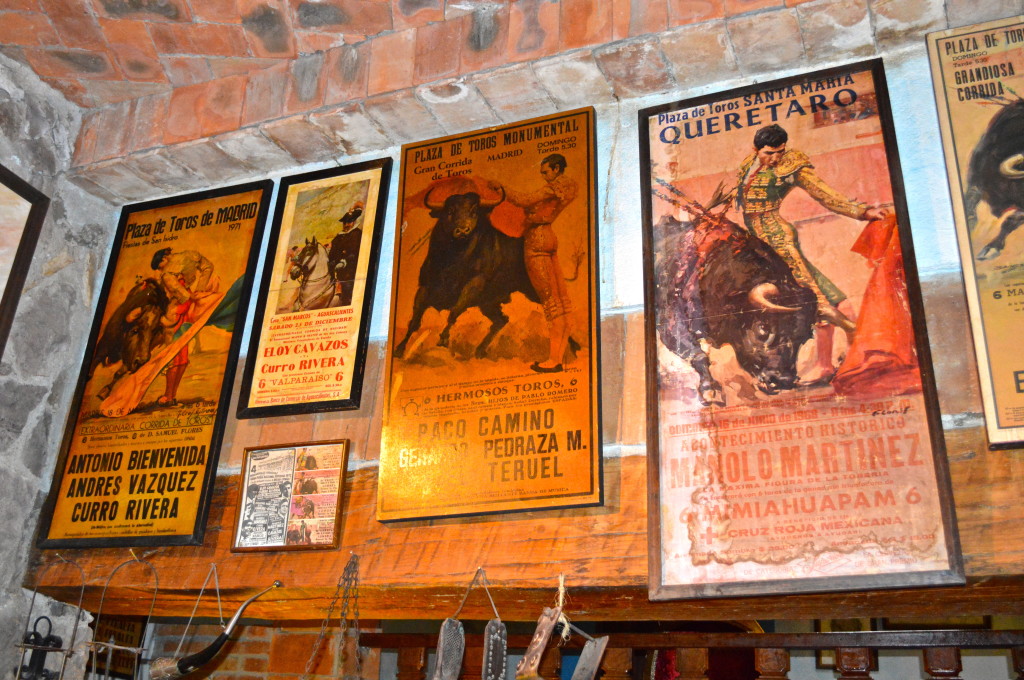 Casa Tio Camilo in Bernal. Place was spooky, beautiful and bizzarre…in other words very cool (surprisingly much better than the 50 peso shitholes I recalled from my first Mexico trip). 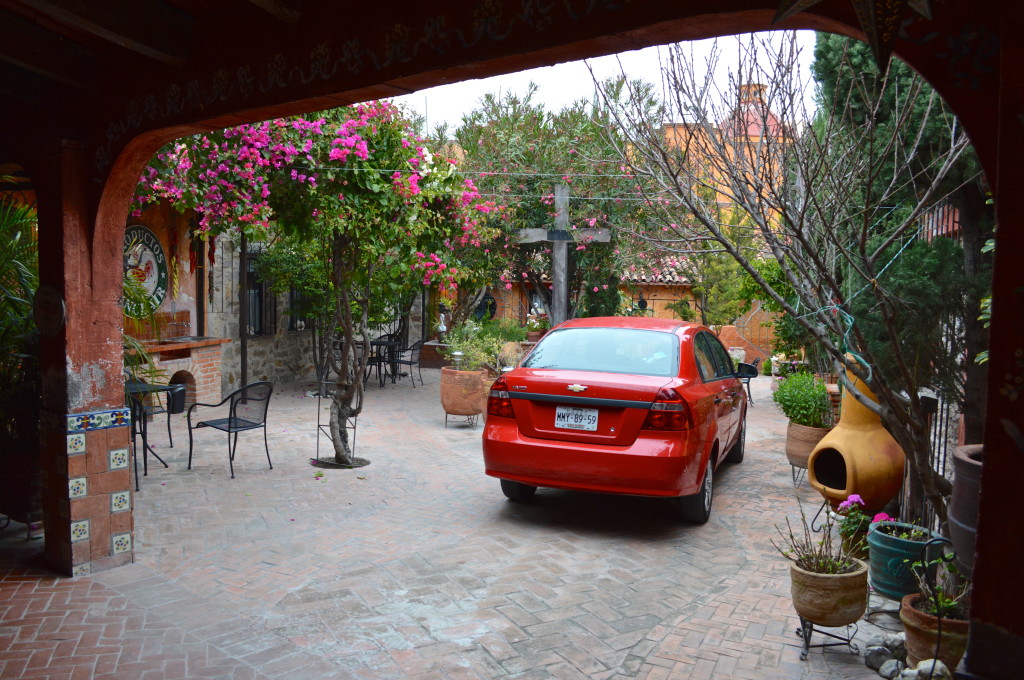 Casa Tio Camilo in Bernal…yes, I was impressed. Behind the huge steel gates facing the street was this little slice of (Catholic) heaven…but really, it was lovey (Dec. 2013). 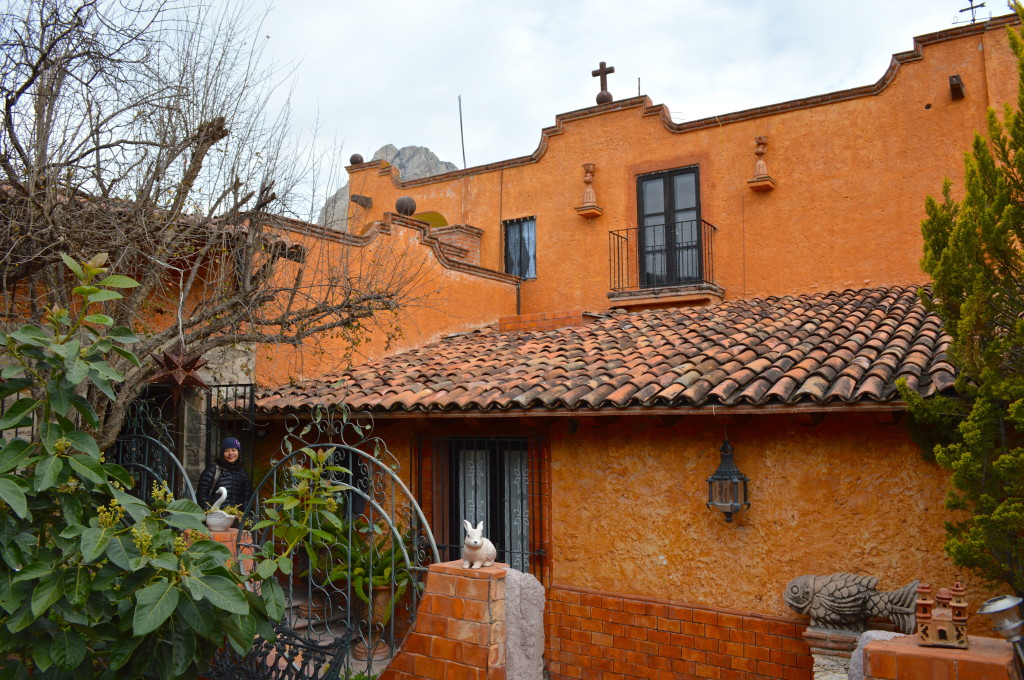 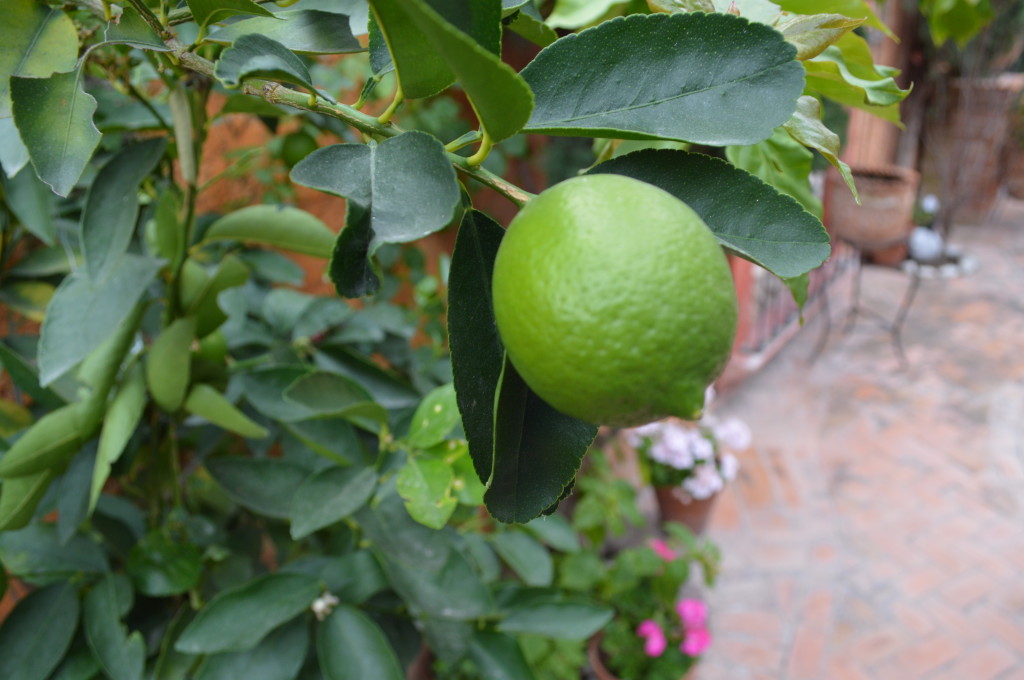 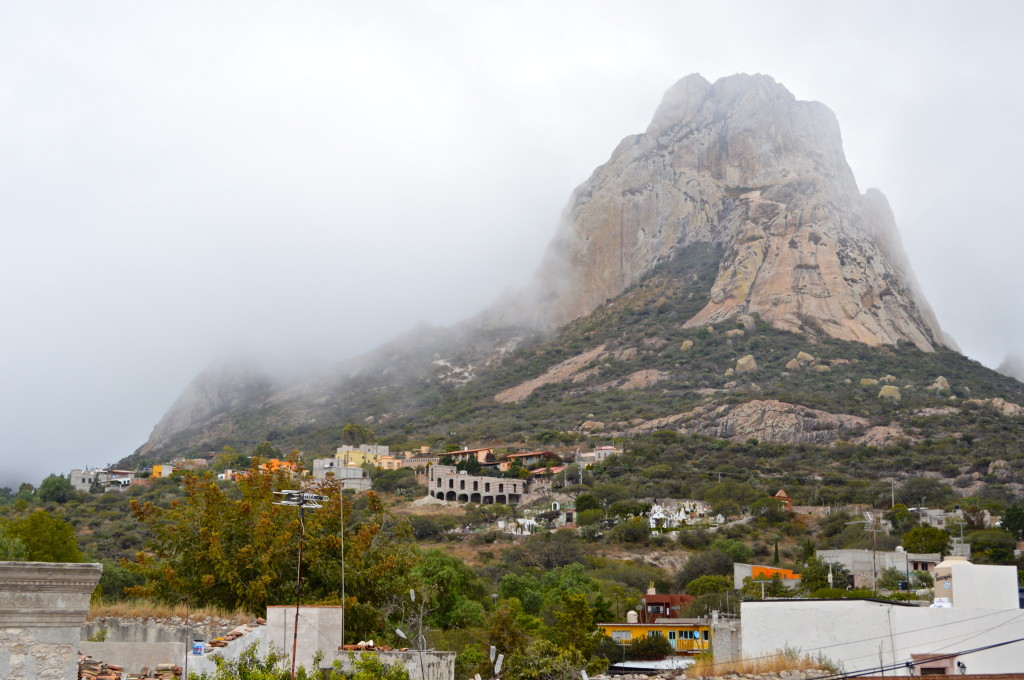 Late morning on our first day in Bernal. Pena de Bernal finally revealing some of its beauty. Time to go climbing (Dec. 2013). 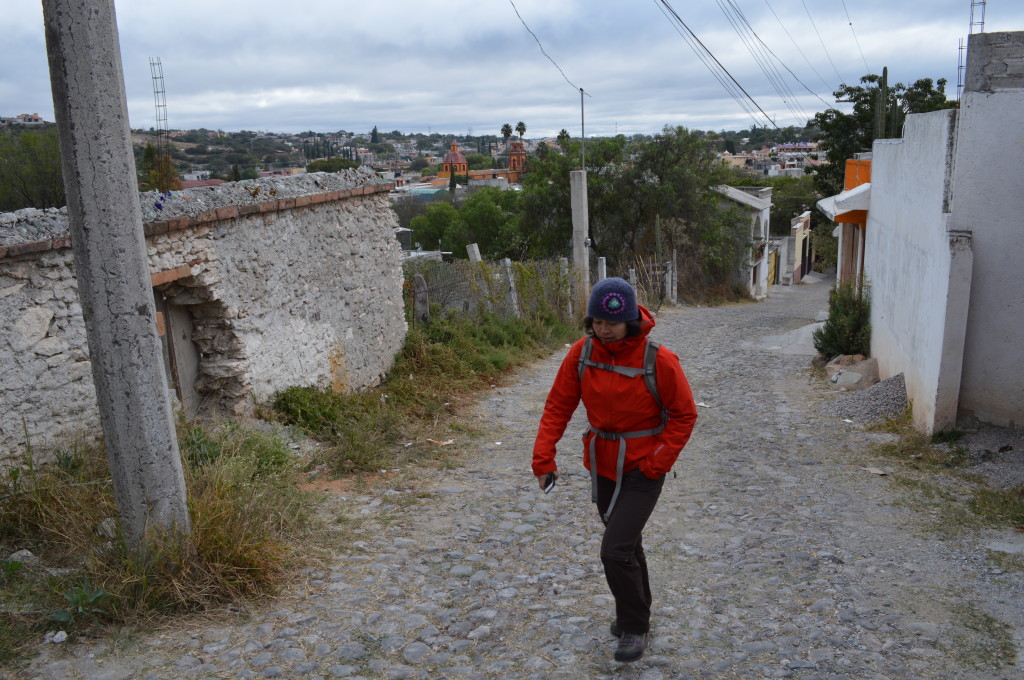 Shirley on the short approach to Pena de Bernal on our first day. Pretty overcast but stayed dry (unlike most other days; Dec. 2013). 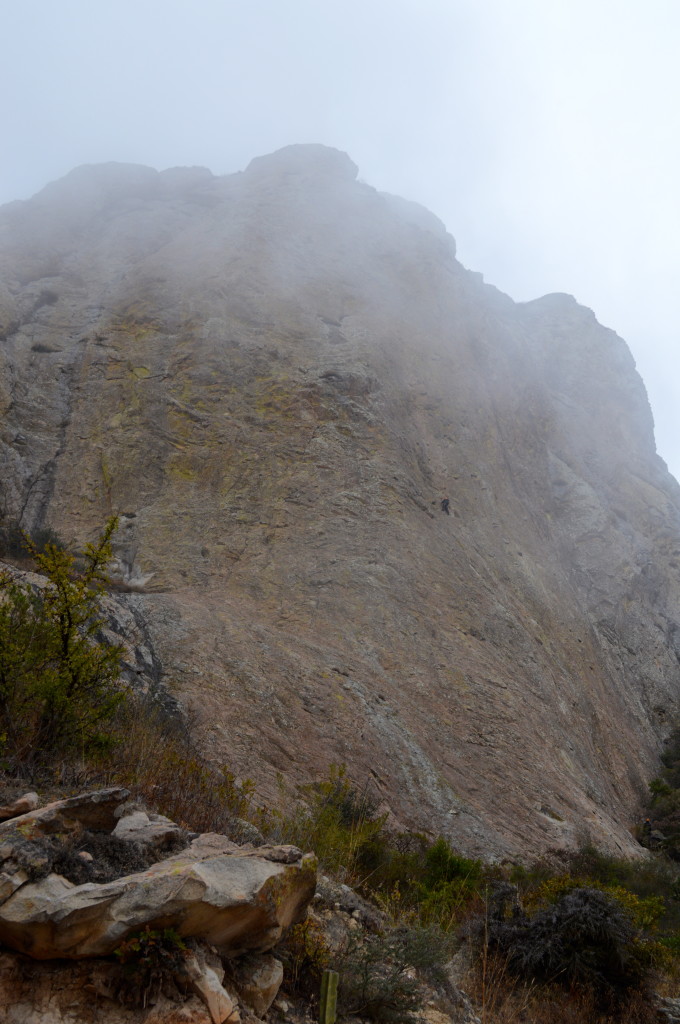 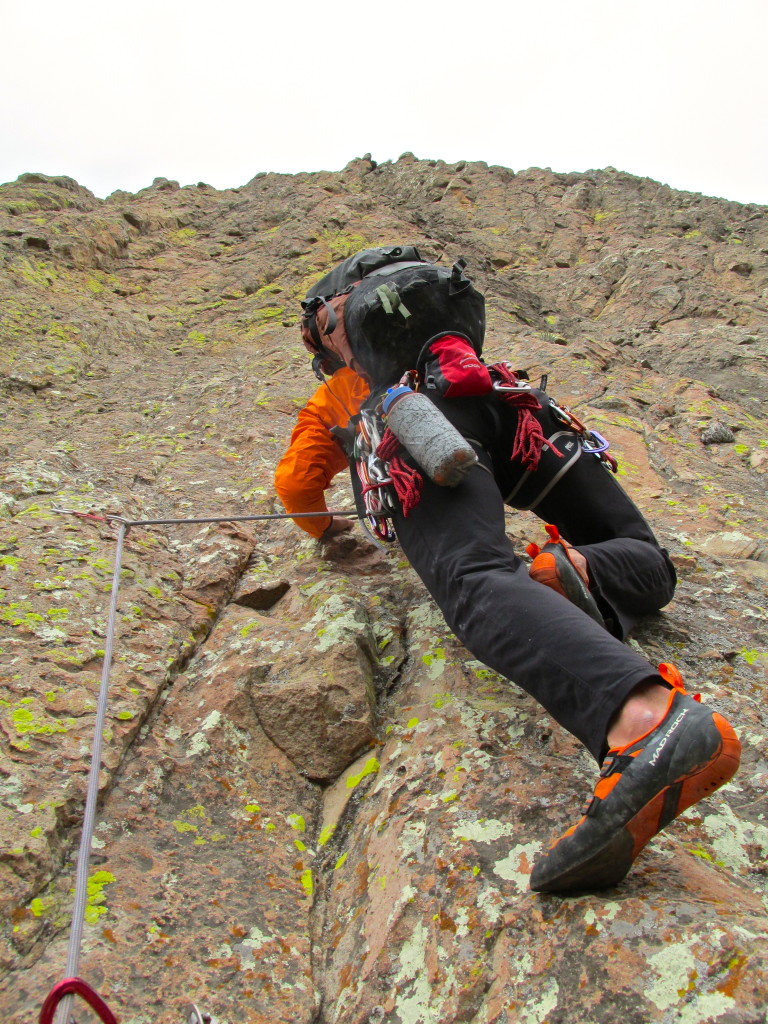 Starting the second pitch of Horizonte De Estrellas. This is some of the funnest face climbing we’ve done. The rock (some volcanic type I think) seemed tailor-made for climbing – sharp crimps and grippy facets for feet. Wish there were more routes on it (Dec. 2013). 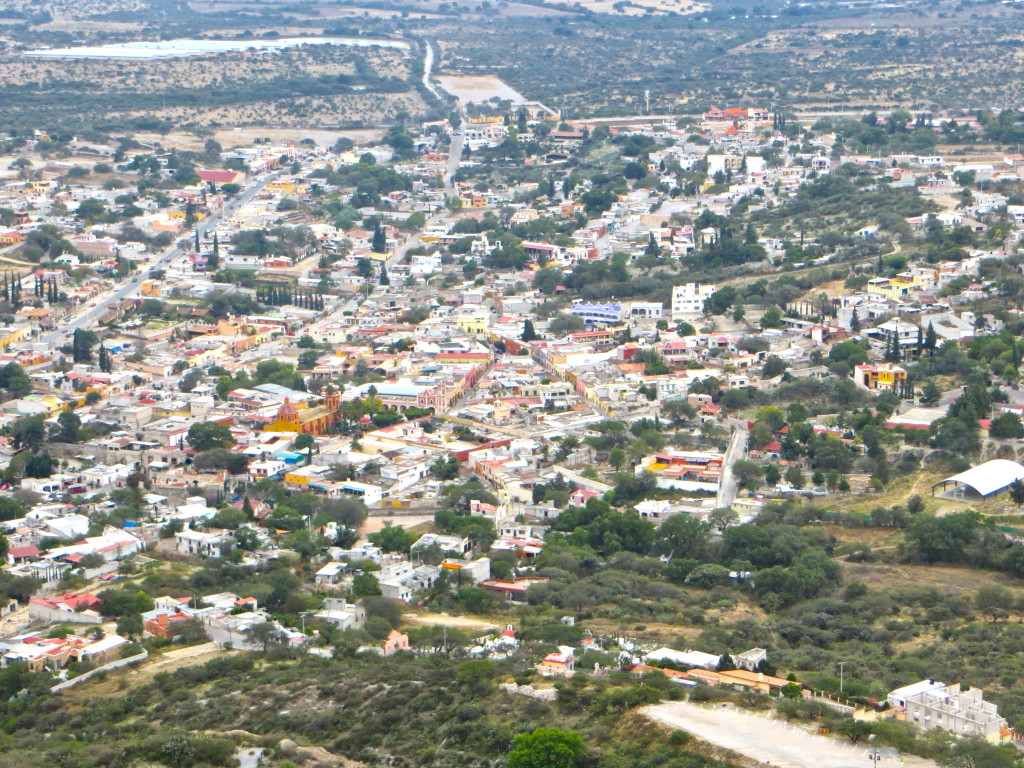 View of Bernal from somewhere on Horizonte De Estrellas route on the Pena. In full res. version of the photo, I can see the patio of our “ghost hotel” (Dec. 2013). 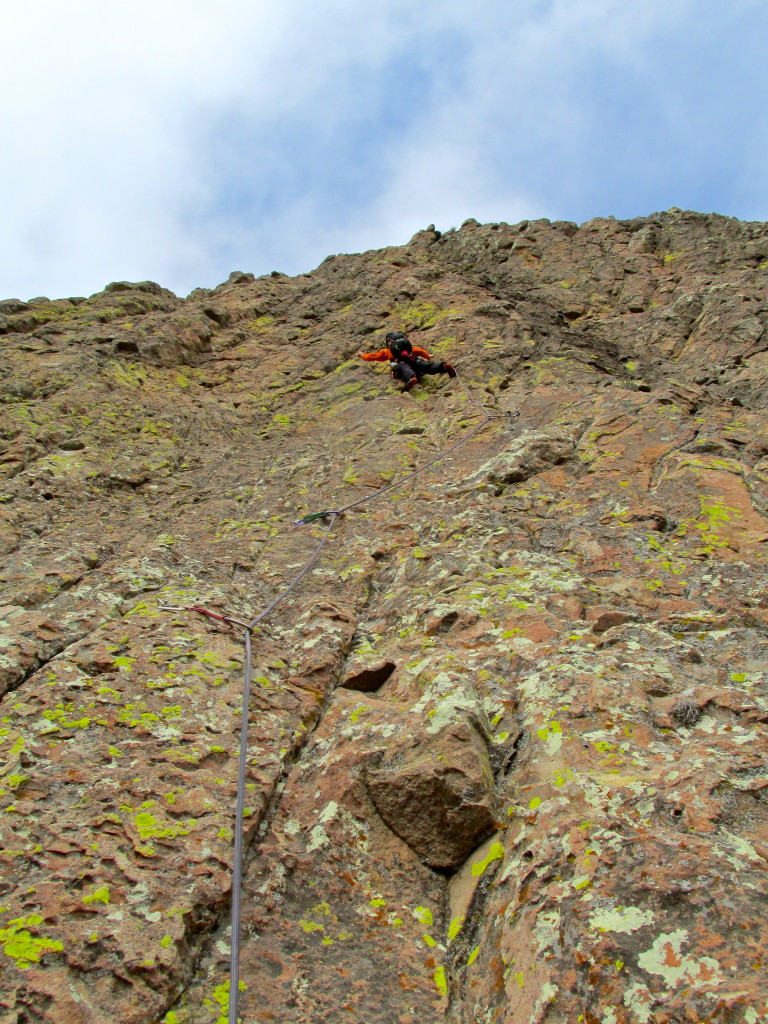 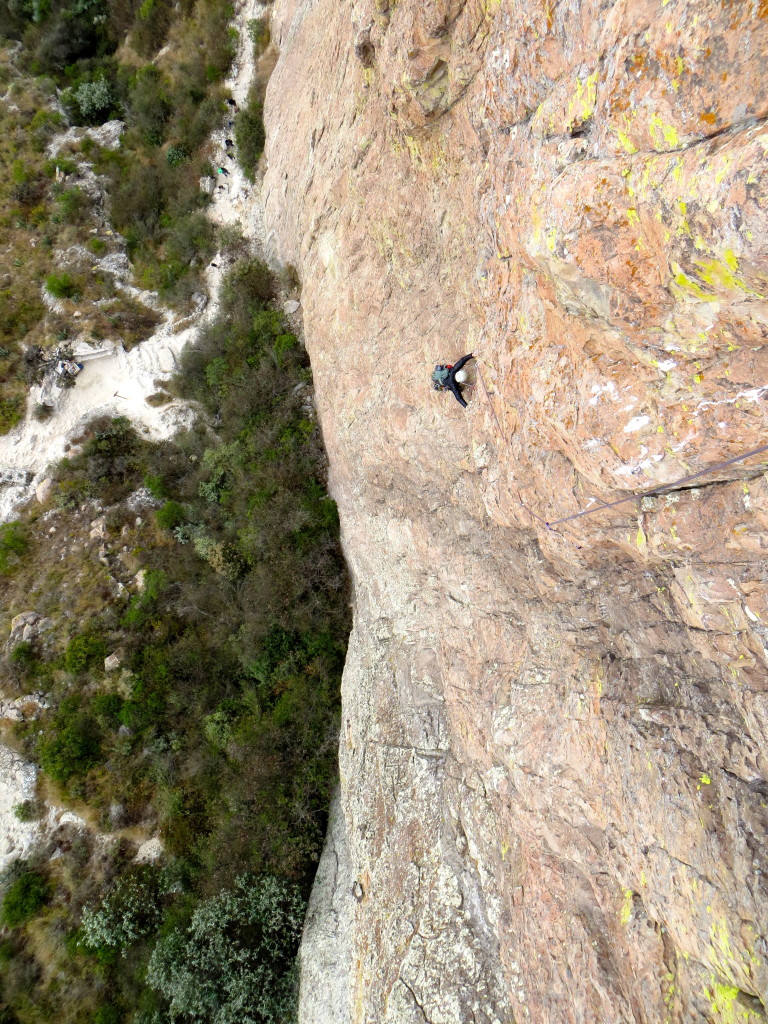 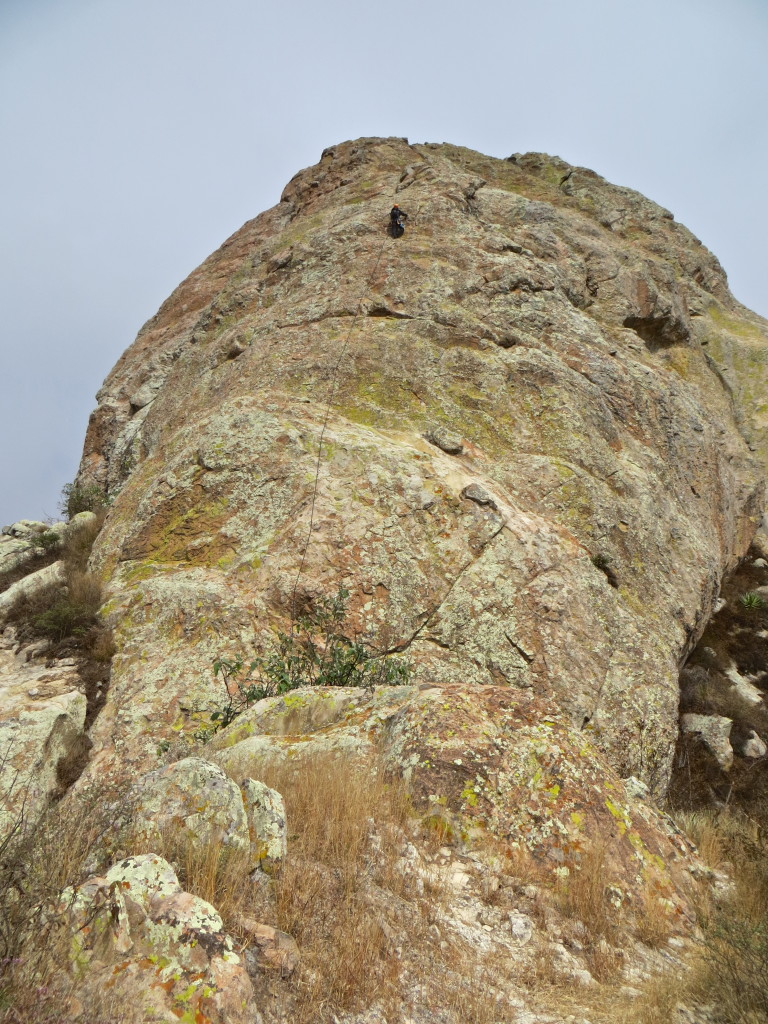 Carlos leading the final pitch (left hand variation) of Bernalina to the summit of the Pena (Dec. 2013). 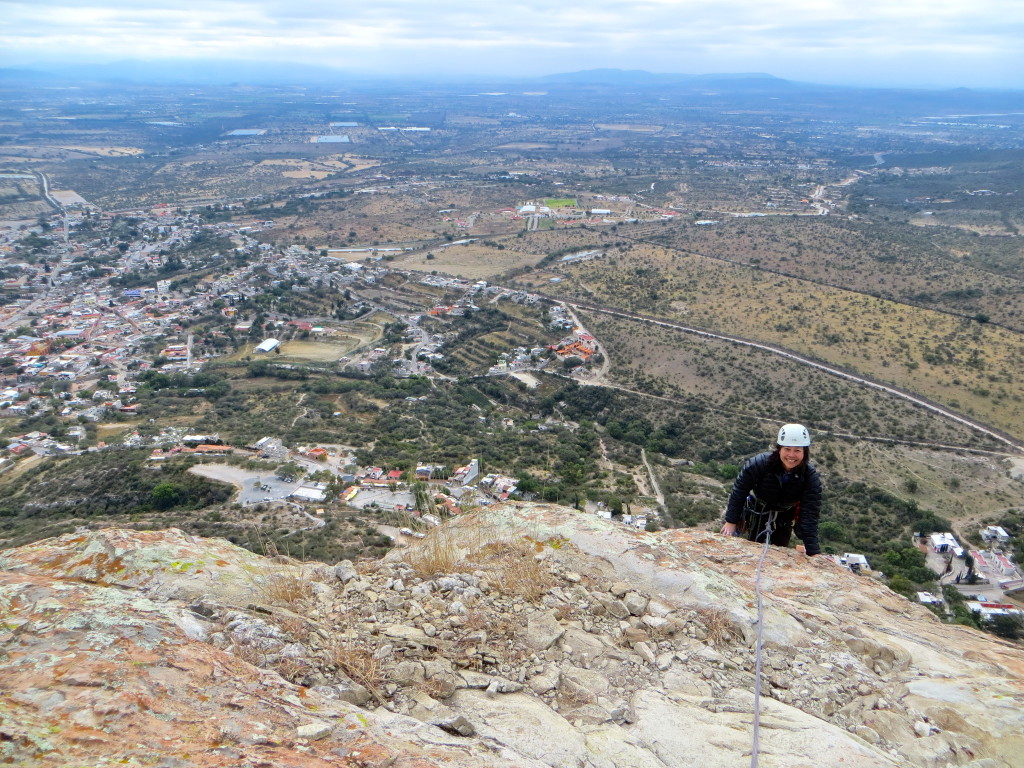 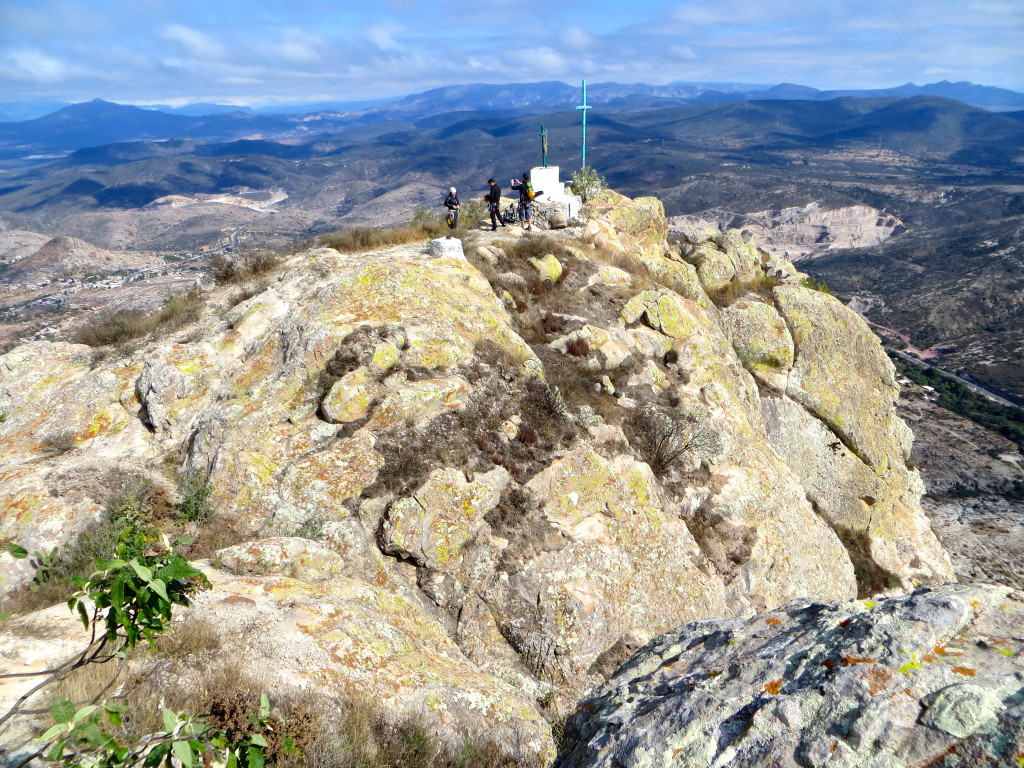 Shirley, Carlos, and Ben on the summit of Pena de Bernal as seen from Bernalina’s top out point (Dec. 2013). 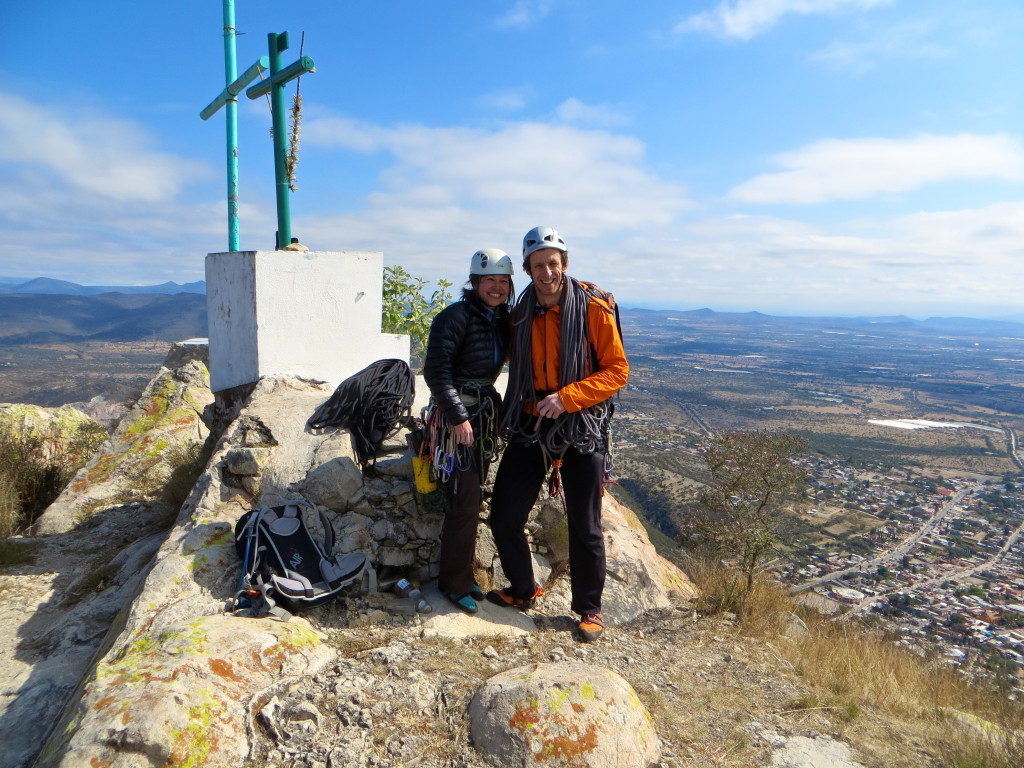 Our first lap to the top of the Pena. Photo courtesy of Carlos or Ben from the other party (Dec. 2013). 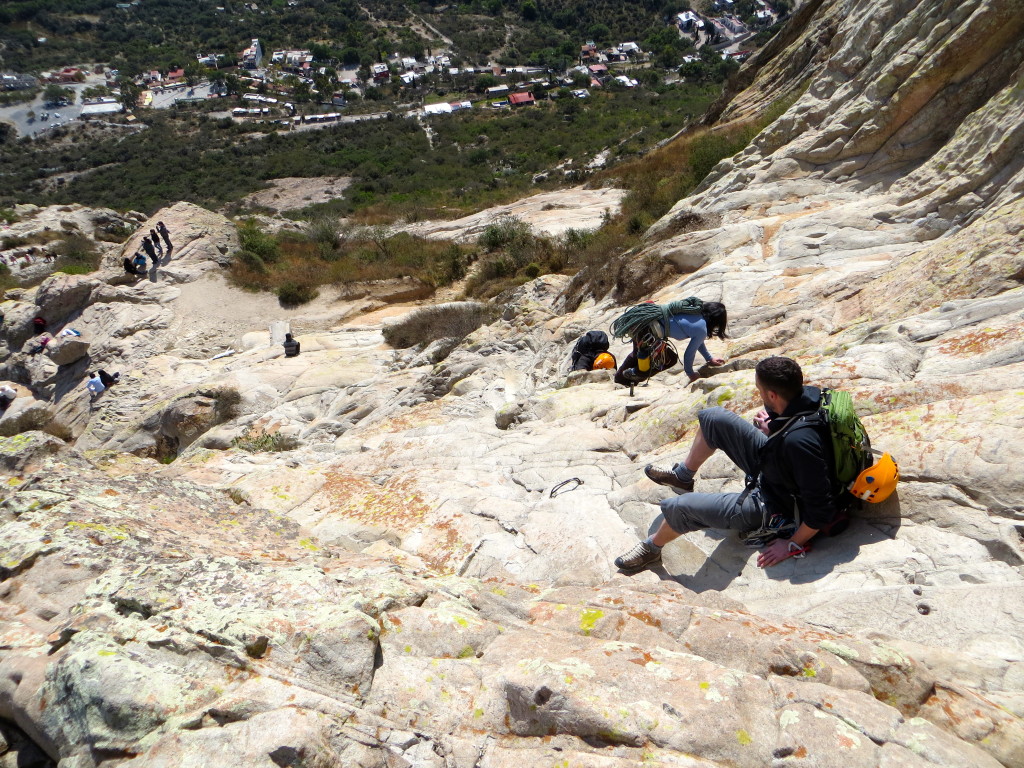 Ben, Shirley and Carlos scrambling down to the hiking path (Dec. 2013). 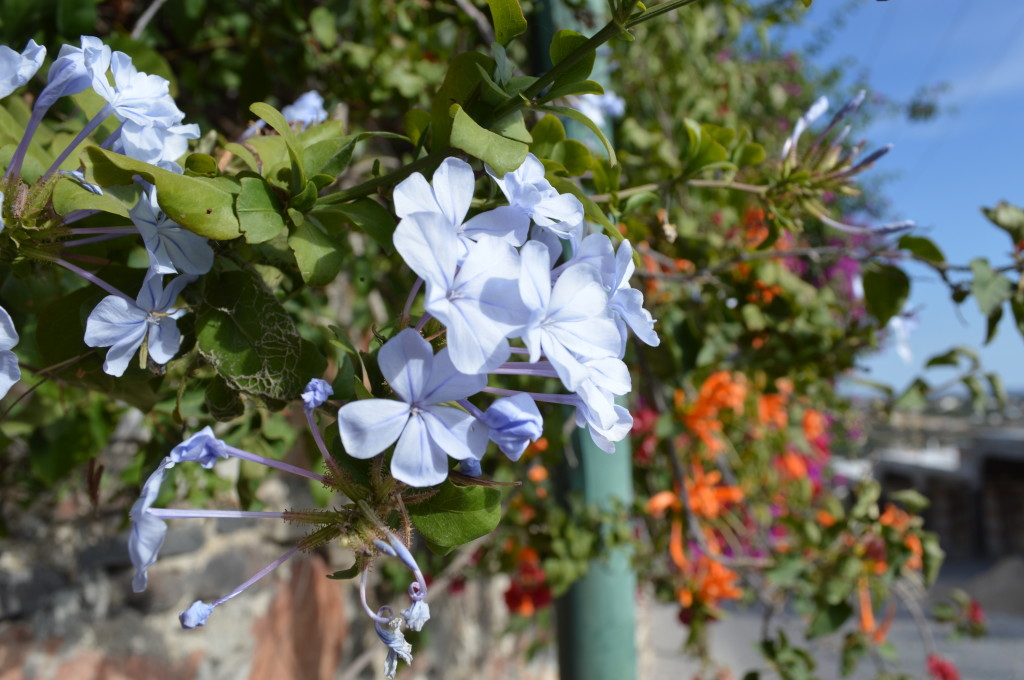 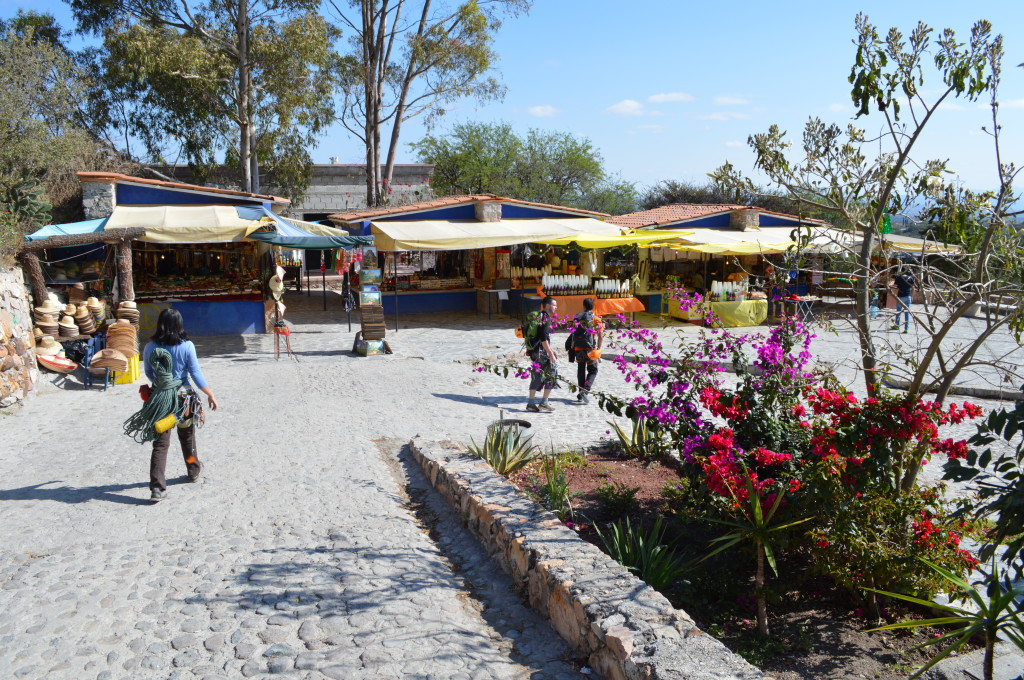 Following Carlos and Ben to the gordita stand after our climb (Dec. 2013). 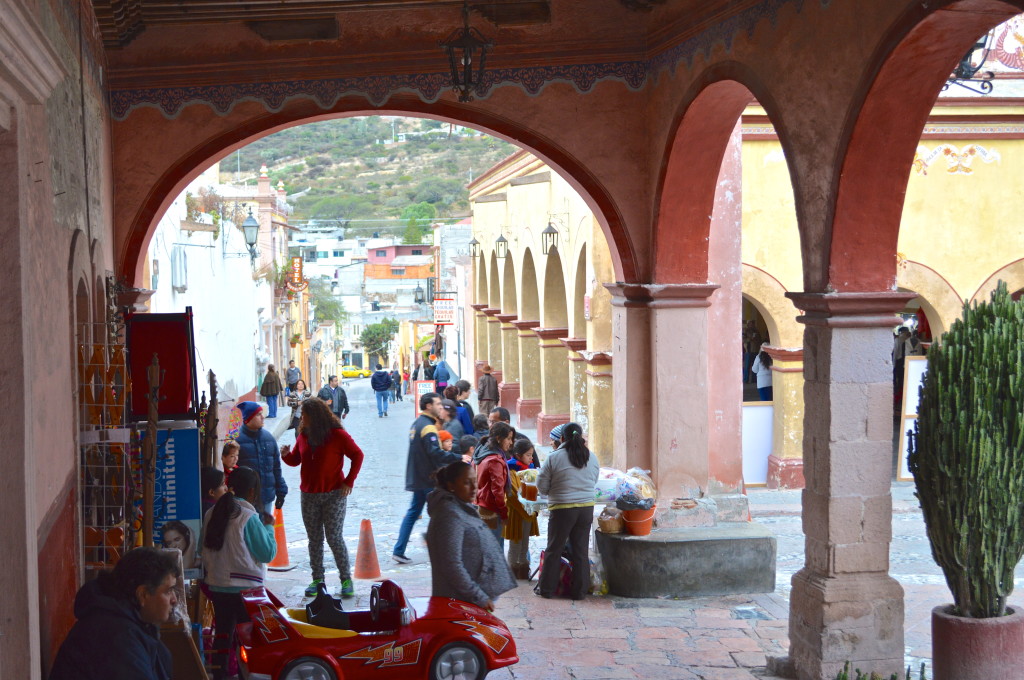 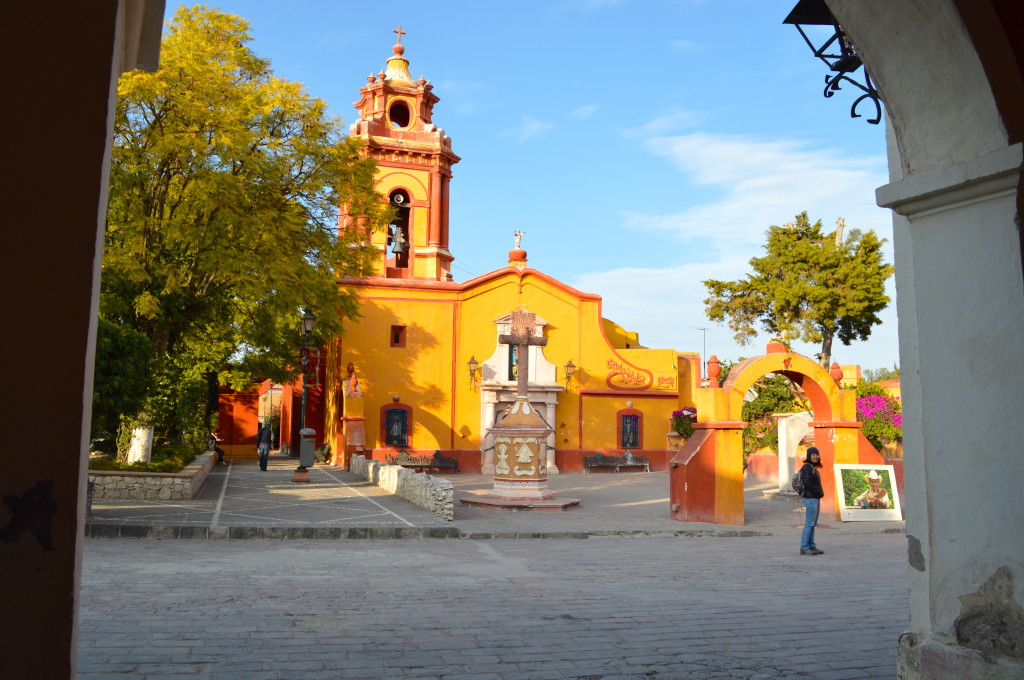 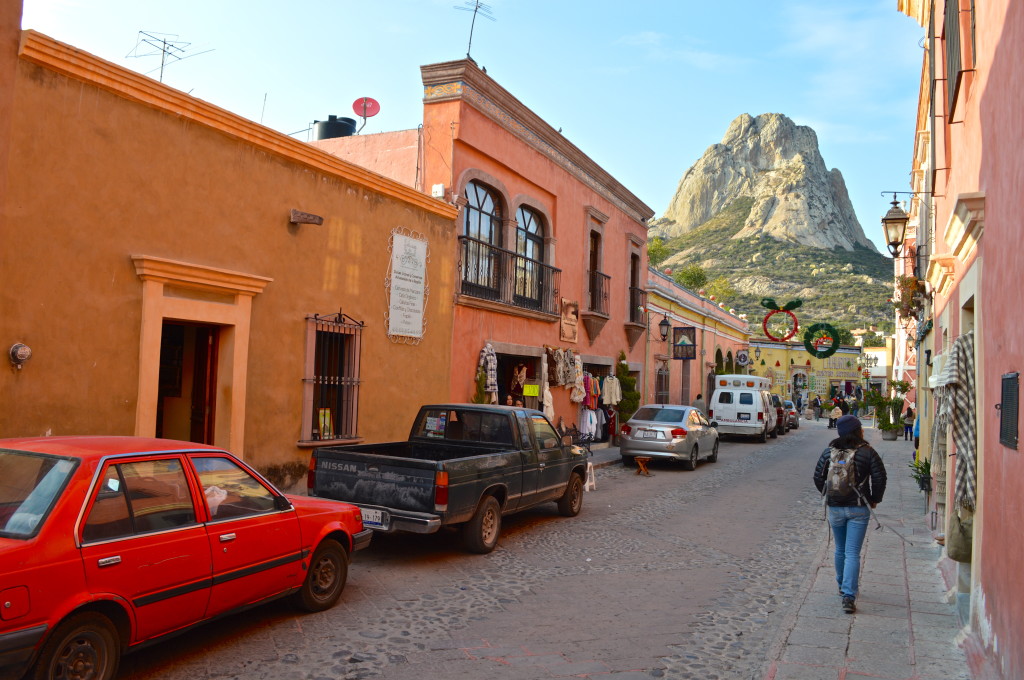 And the view that probably made us want to check out this area: Pena from a charming street in Bernal (Dec. 2013). 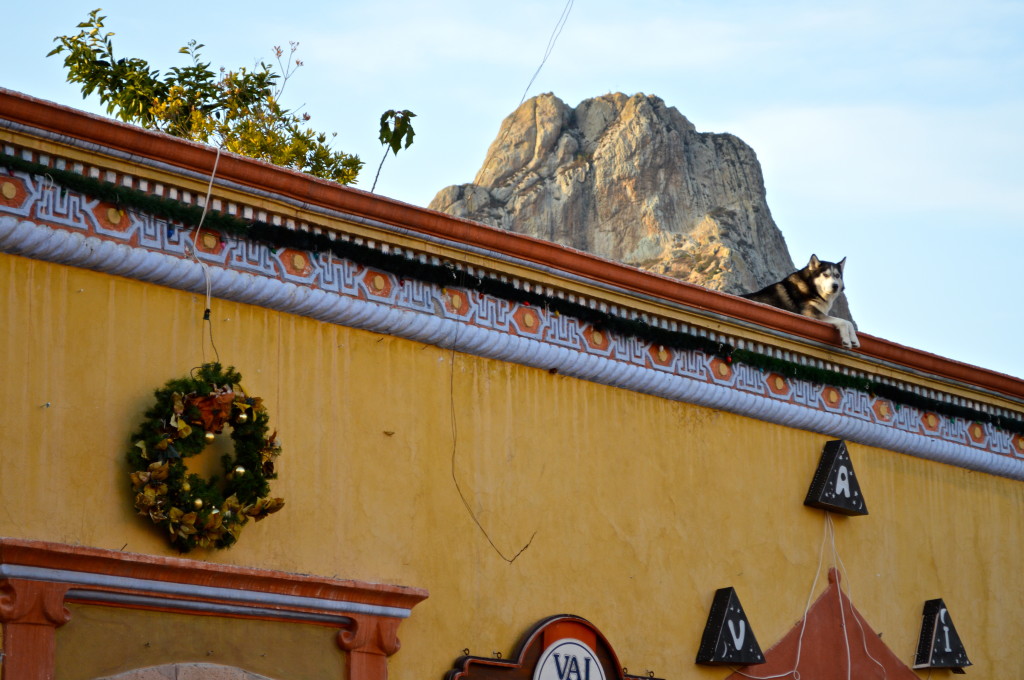 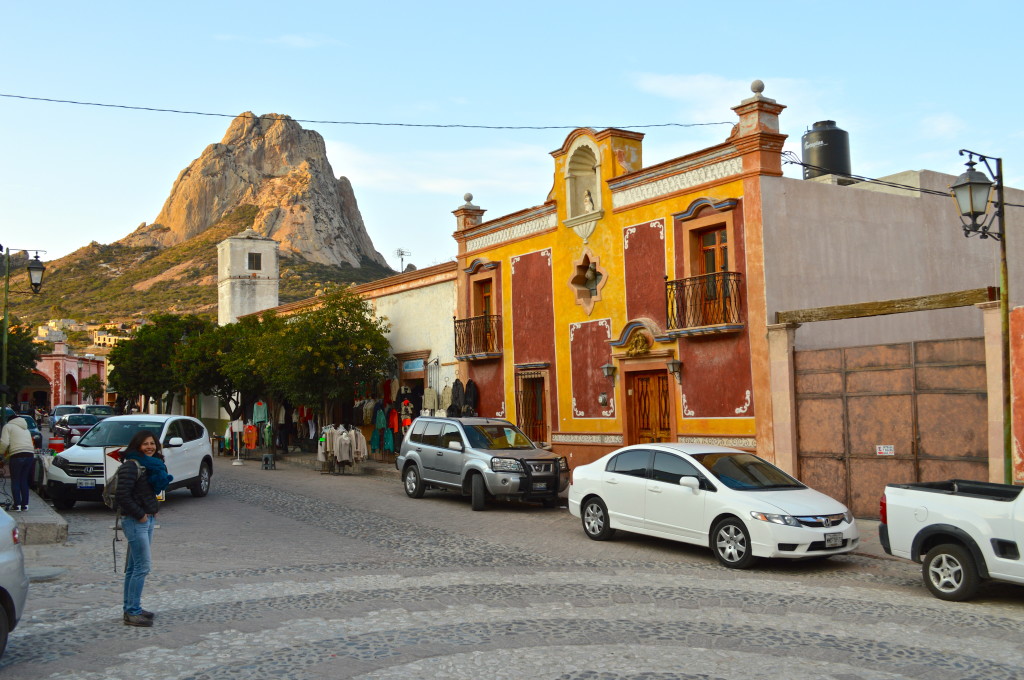 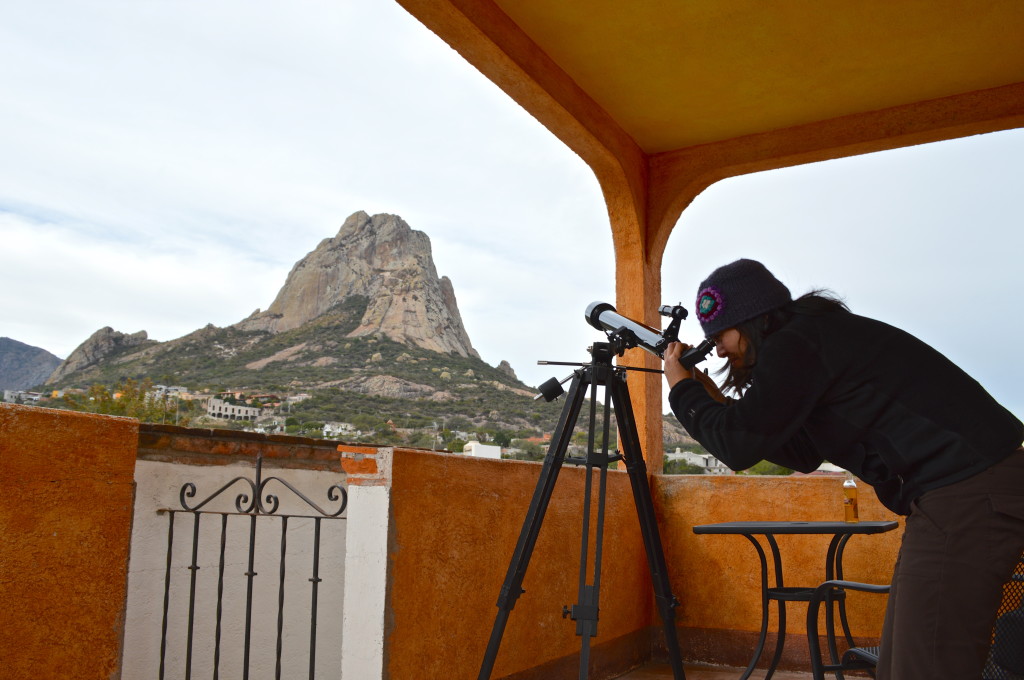