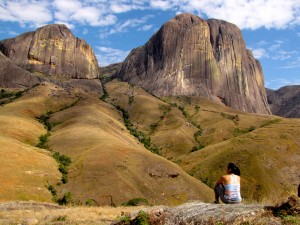 Views from the Chameleon.

Next day we took a break. Can’t really say we slept in as we’ve gotten into the habit of going to sleep right after dinner (8pm) and thus waking up at 5am and counting down the minutes to the 6:30am breakfast time. After an extra cup or three of their (good) coffee we decided to do a short hike to the summit of the Chameleon formation (summit ridge looks like a guess what?) where we spent a couple hours soaking in the views of the Tsaranoro Range. We then hiked down towards the villages where we encountered another family (gang?) of lemurs. We spent 30 minutes shooting photos until they scattered. Slowly made our way back to camp via a Malagasy village. We saw a lively snapshot of what I presume is average rural life in Madagascar: men working the rice paddies, women working in the village processing the rice and kids trying to sell us stuff. That night we met Lorella and Andrea, a couple of Italian climbers who were interested in our sort of climbing level (sub-7a!). We hit it off and ended up spending quite a bit of time chatting about climbing and especially climbing related travel. 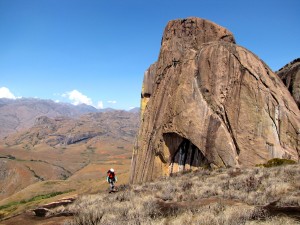 Back to climbing on the following day. We wanted to see the start of Out Of Africa and so we hiked in with the intention of climbing something easier nearby. There’s really only one easy line in the area and we got on it (Cas Nullard). A mix of easy (5+ or lower, some 6a moves) slab and some interesting water groove “scumming.” The best parts of the climb were by far the views of the main Tsaranoro Walls. The ten pitches went quickly and soon we were hiking along the summit plateau of the formation looking for a way down. We recalled the area trail sketch from the night before and cautiously made our way down overgrown slabs on the backside. Eventually we were forced into a 20-foot rappel off some grass into a deep and narrow wash. Here things got interesting. The wash was of course densely overgrown and choked with house sized boulders (similar to the upper reaches of First Creek Canyon in Red Rocks…descent from Resolution Arete deja vu). After a two hour battle with the flora of Madagascar (again, thinking about what a heaven this would be for multiple species of mambas), we emerged into daylight and found ourselves on the back side of the Lemur Wall. At least now we know how to hike off that one. 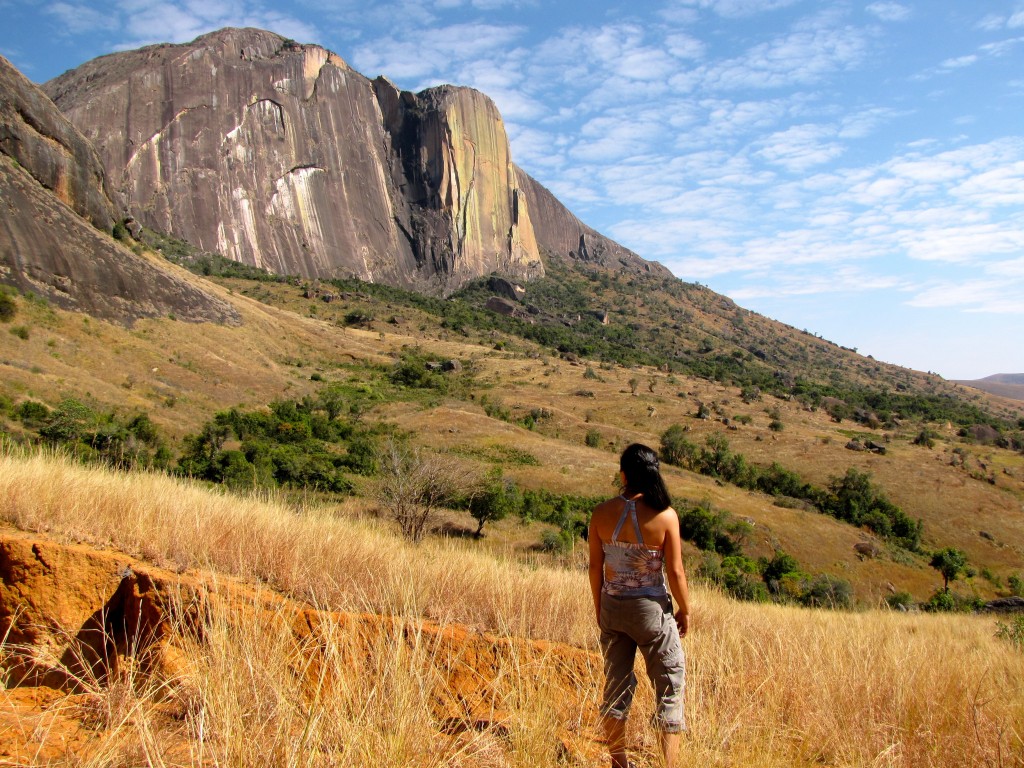 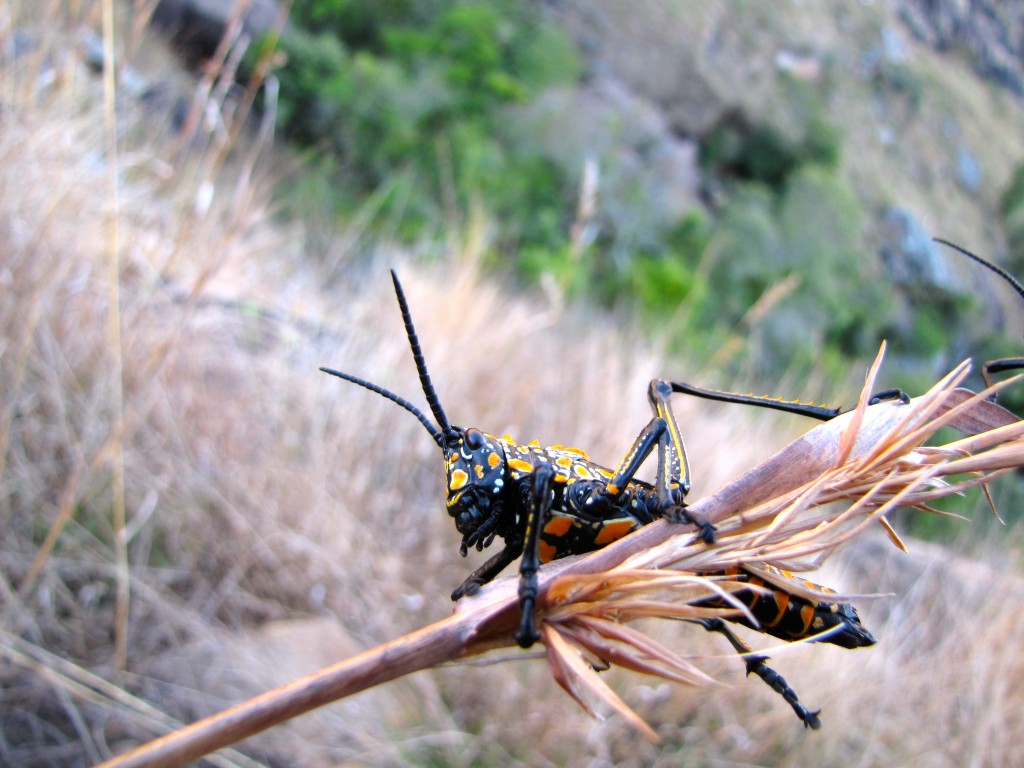 A huge grasshopper we saw on a trail near Camp Catta (think half fist sized here; Sept. 2011). 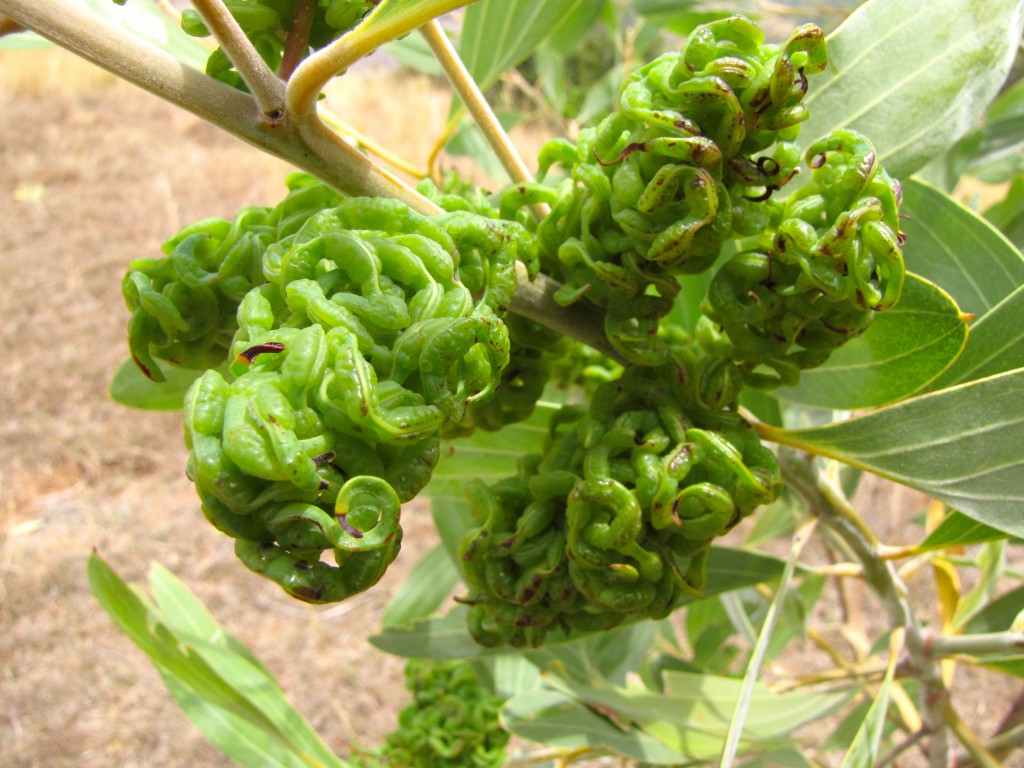 Interesting flowers (?) we saw growing on small trees outside of Camp Catta (Sept. 2011). 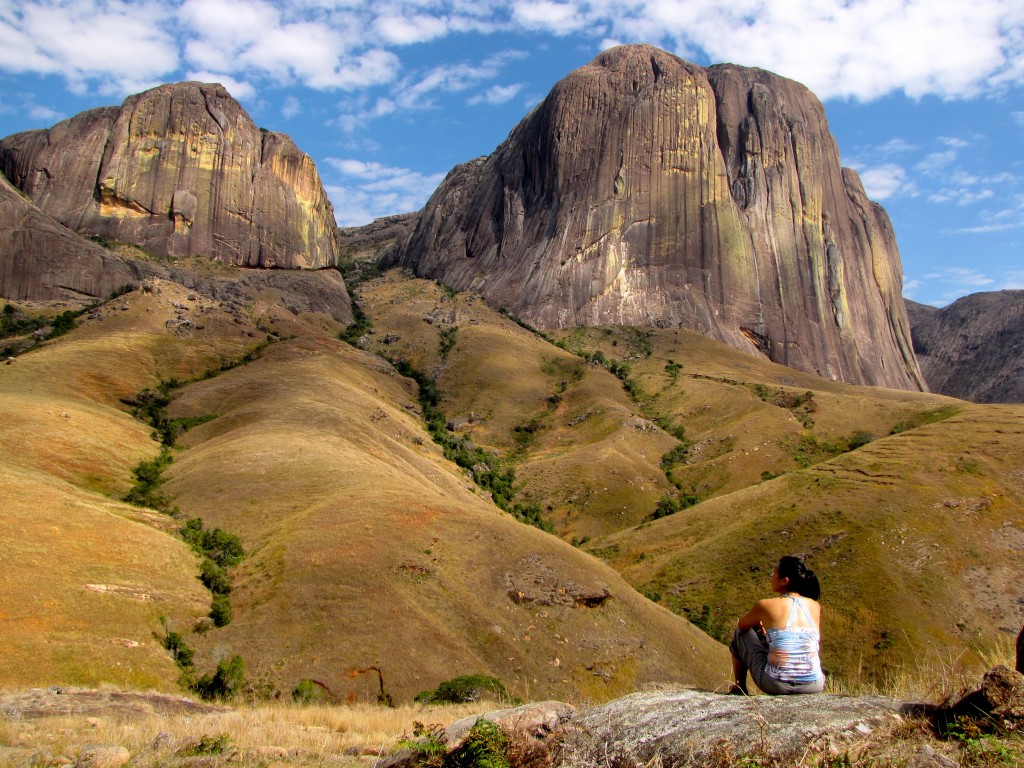 Shirley soaking in the views during our hike up the Chameleon. Tsaranoro is on the right and Mitsinjoarivo is on the left (Sept. 2011). 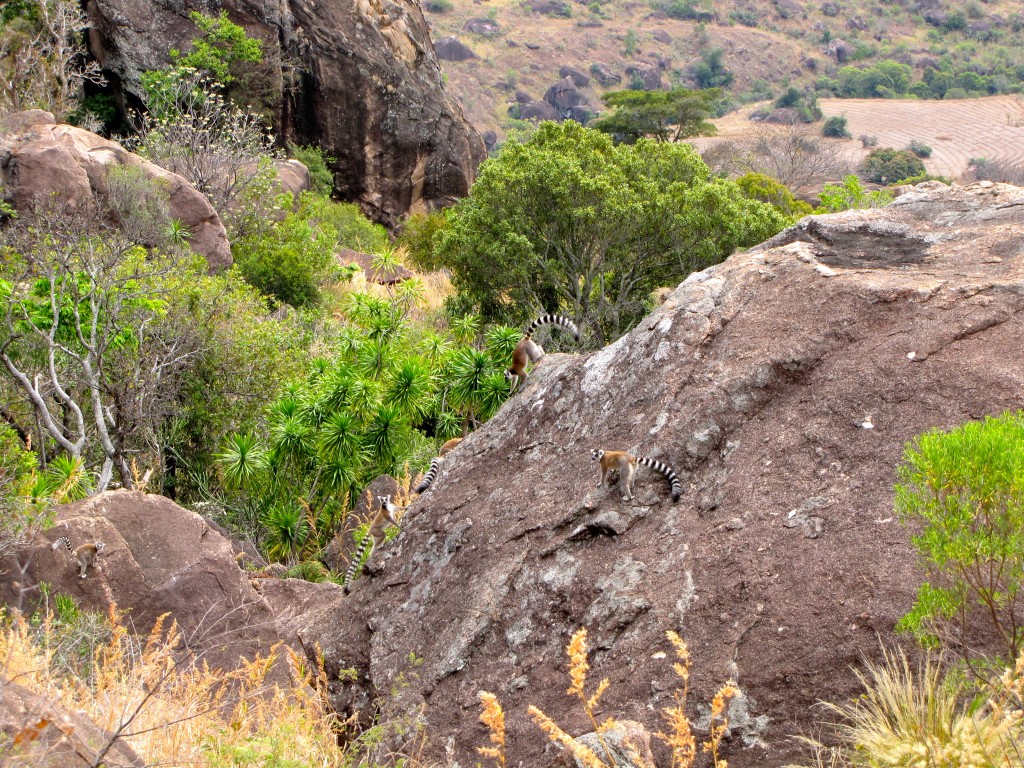 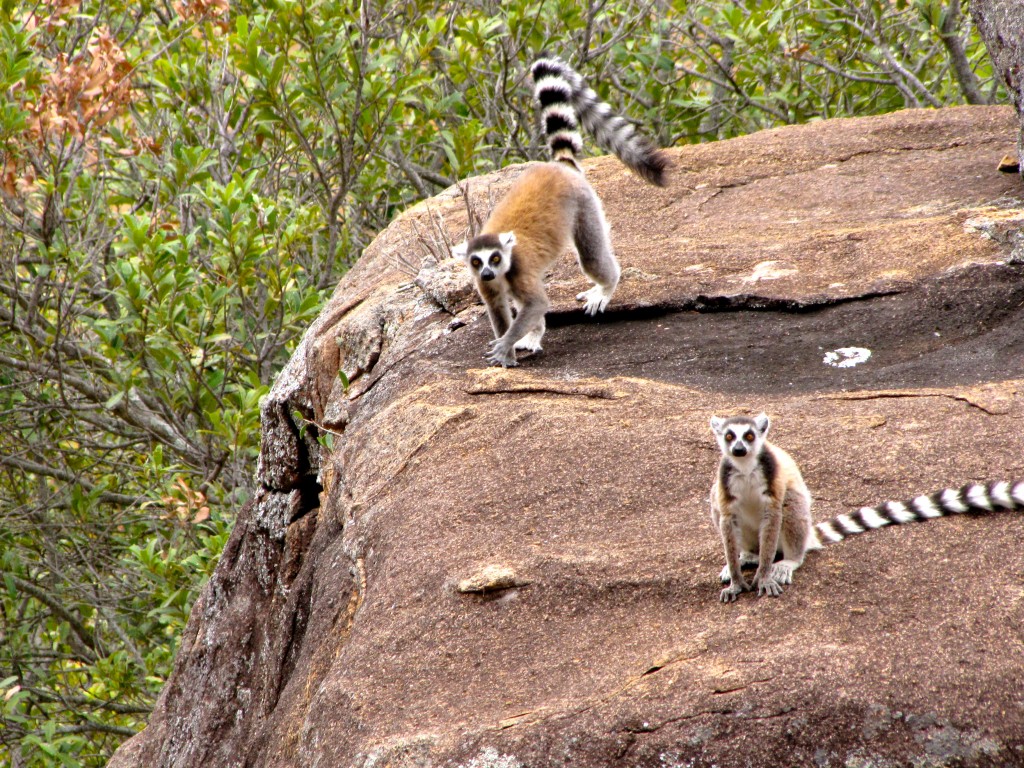 Two lemurs atop a large boulder on the backside of the Chameleon formation (Sept. 2011). 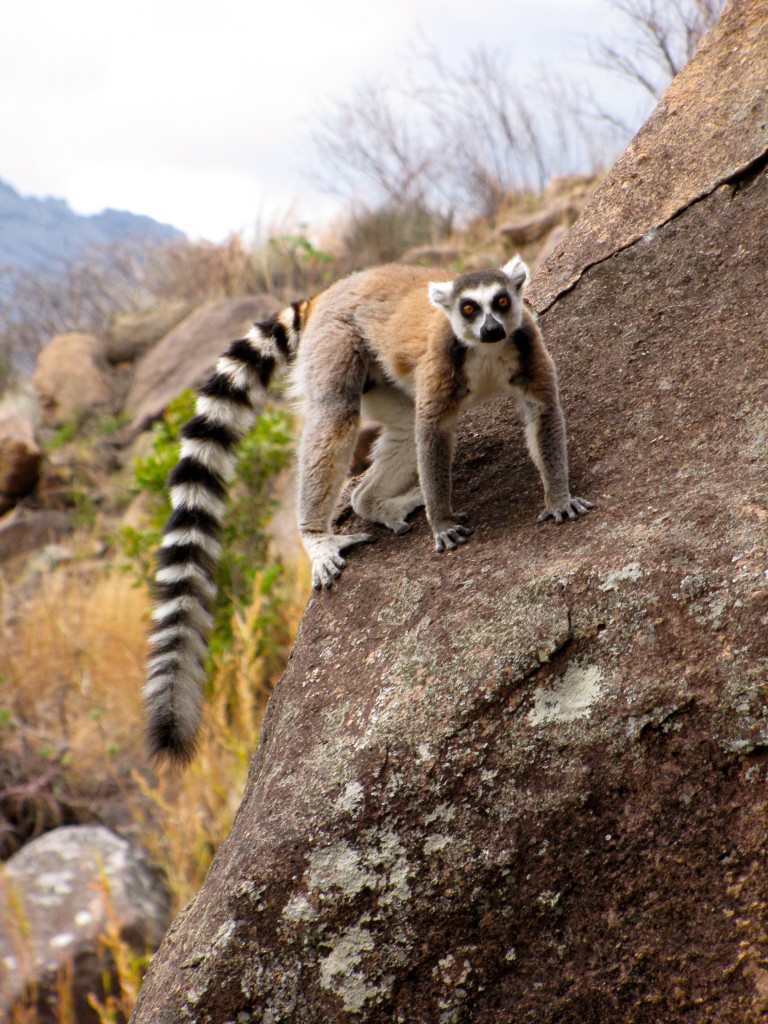 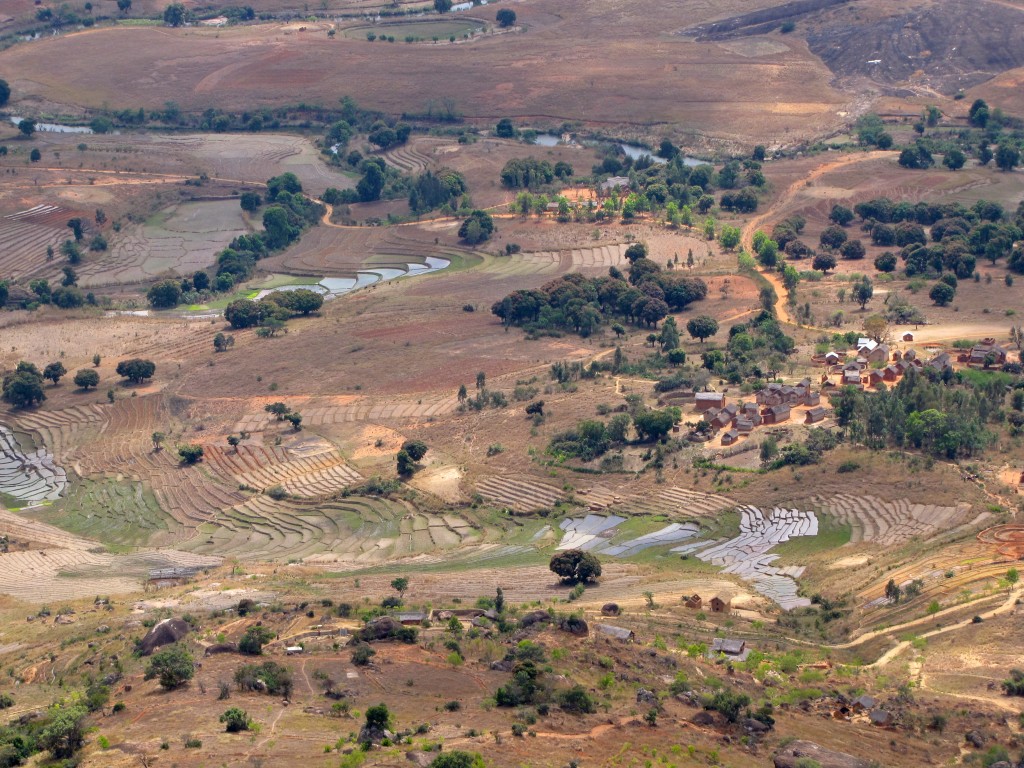 A Malagasy village from the summit of the Chameleon formation (Sept. 2011). 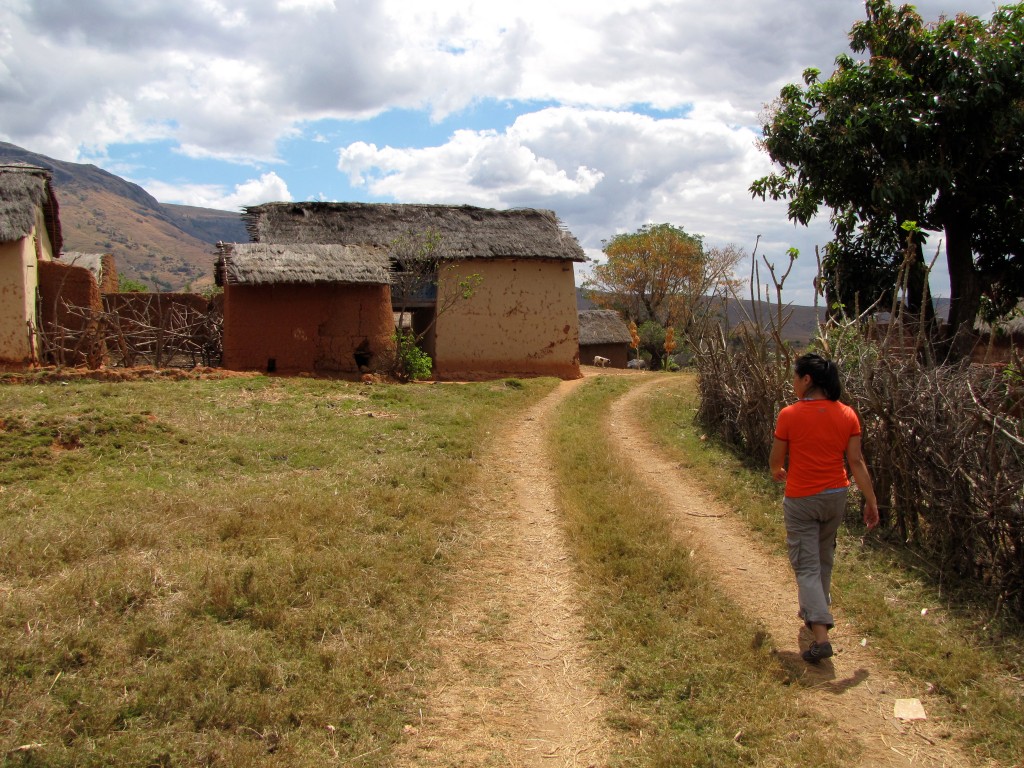 Shirley in a Malagasy village on our hike back to Camp Catta (Sept. 2011). 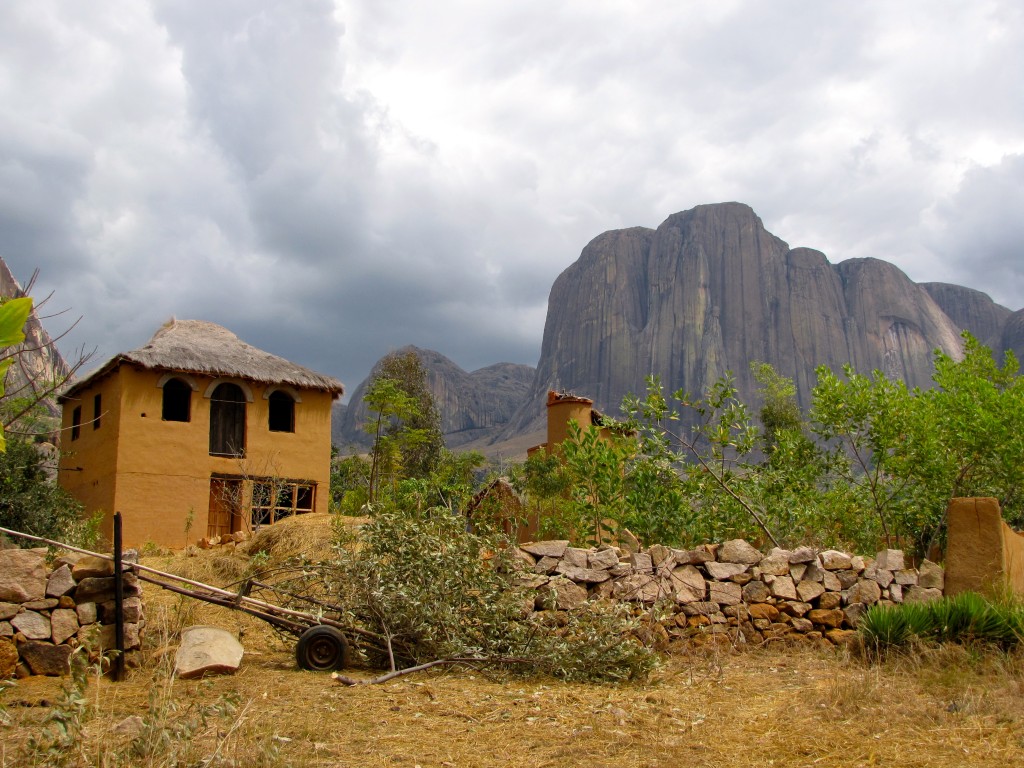 The main walls of the Tsaranoro as seen from the Malagasy village on the valley floor (Sept. 2011). 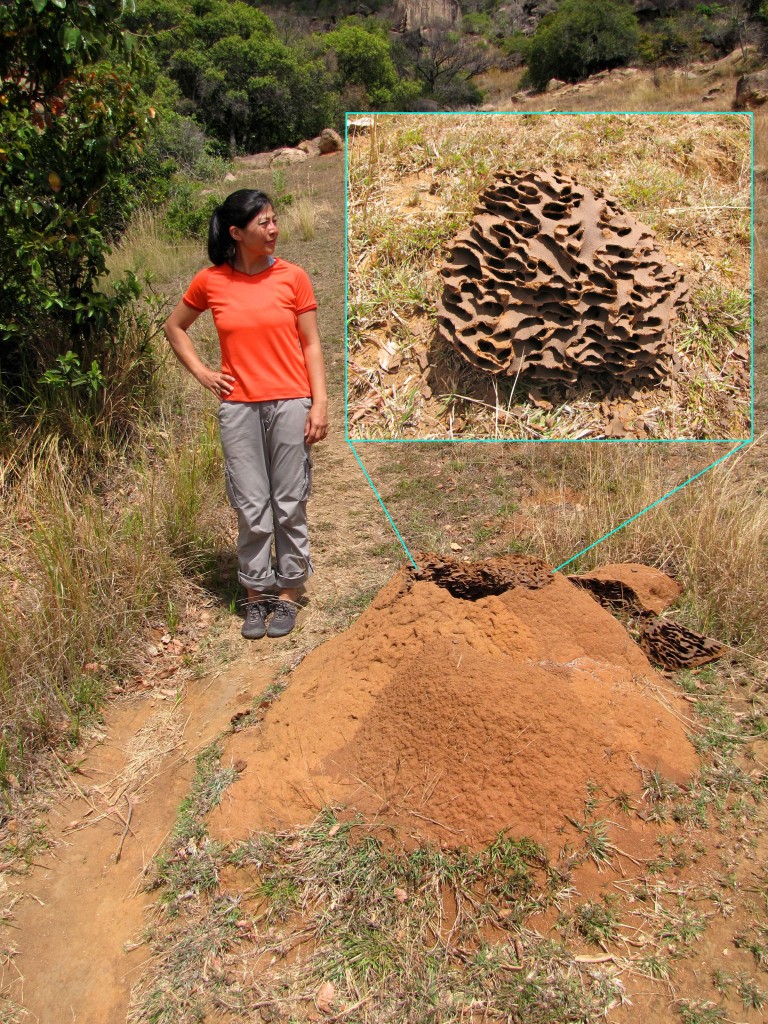 A cross-sectioned (not by us) termite mound. The valley floor had one every 50 feet almost (Sept. 2011). 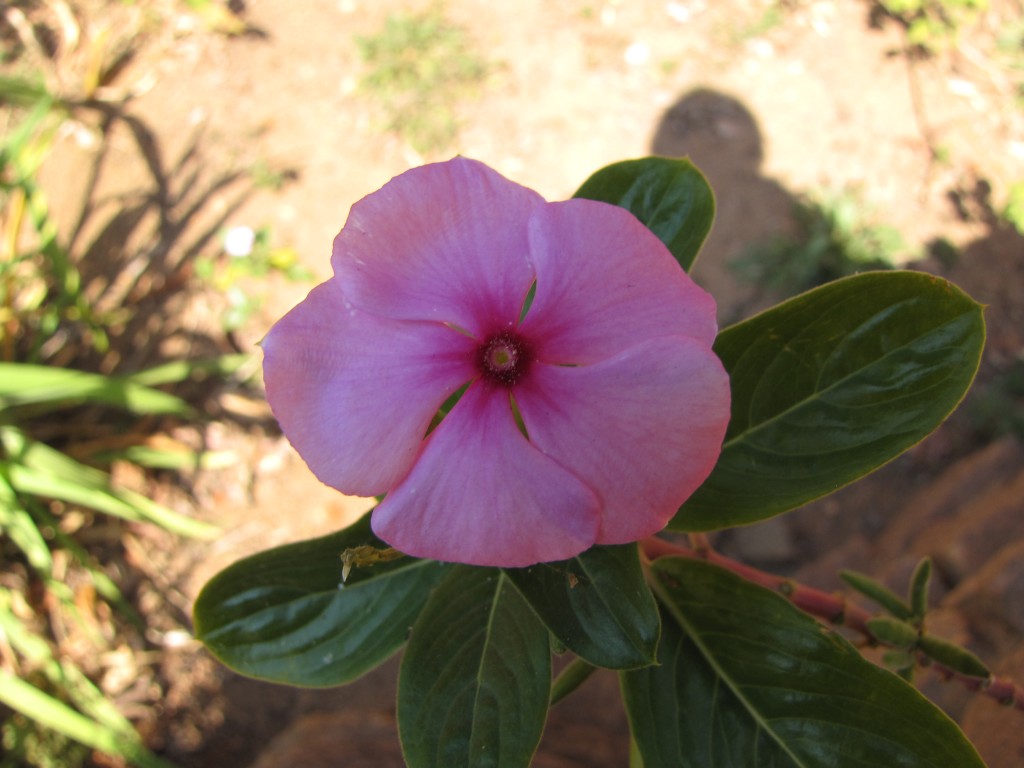 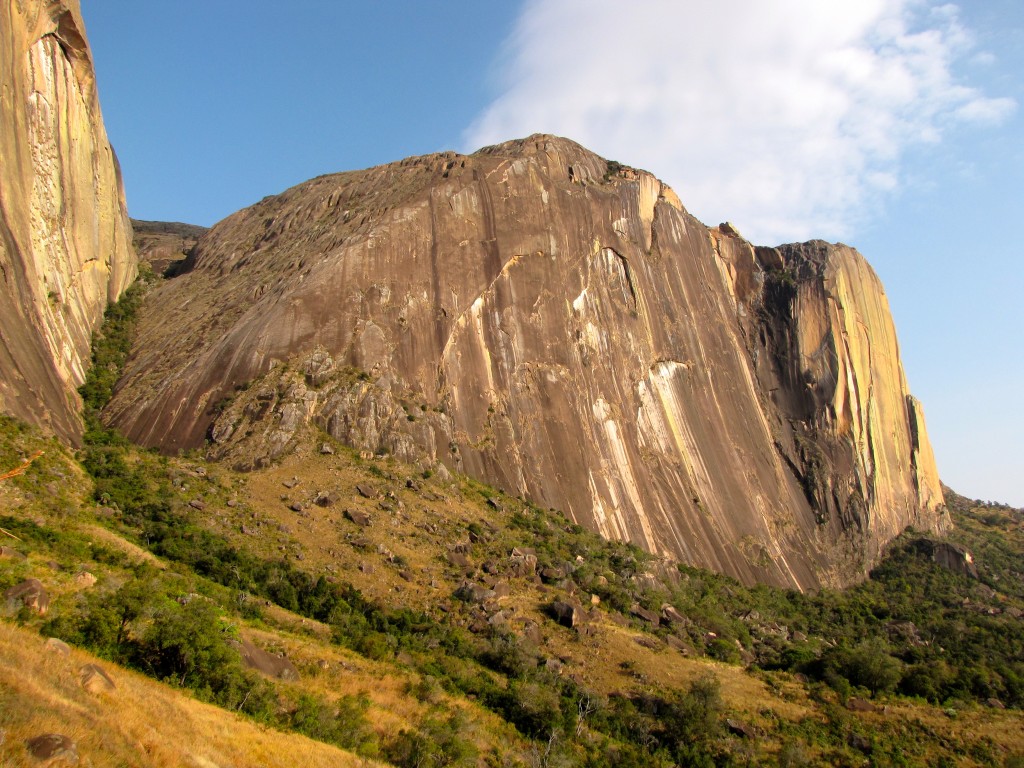 The Karambony formation. We climbed the ass-end of it: the un-proud, low angle, slabby left side (Sept. 2011). 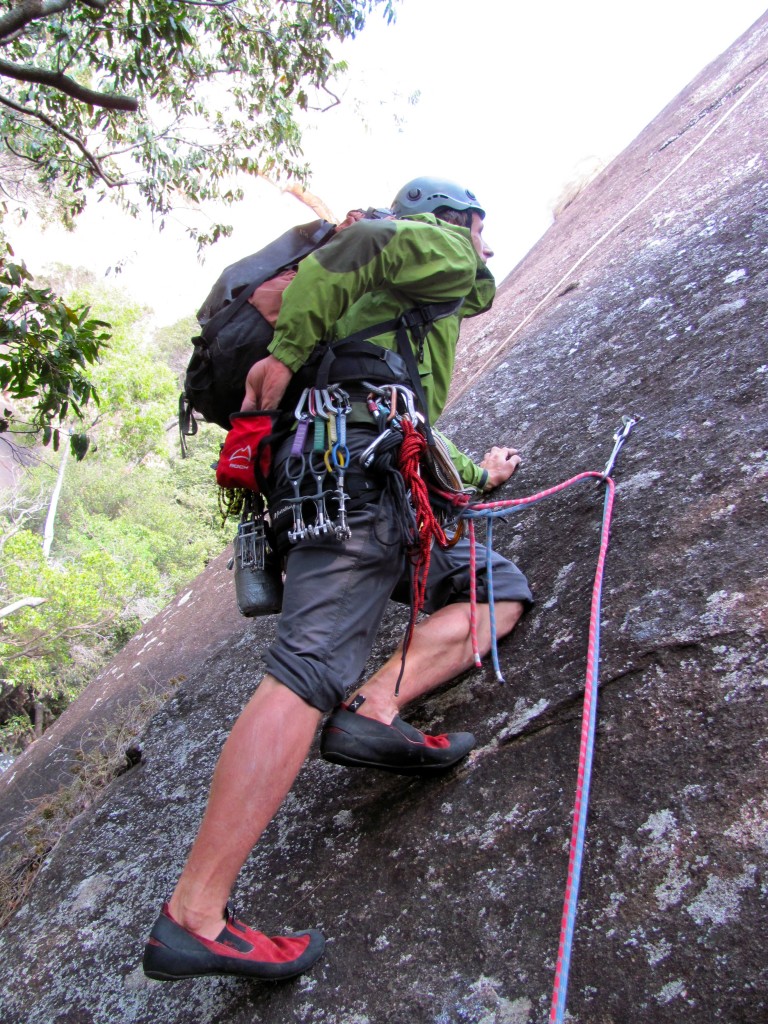 Starting up Cas Nullard on the ass end of Karambony. An OK 10-pitch line up mostly easy slabs. The gear was not needed (had some other ideas that morning & we were carrying over; Sept. 2011). 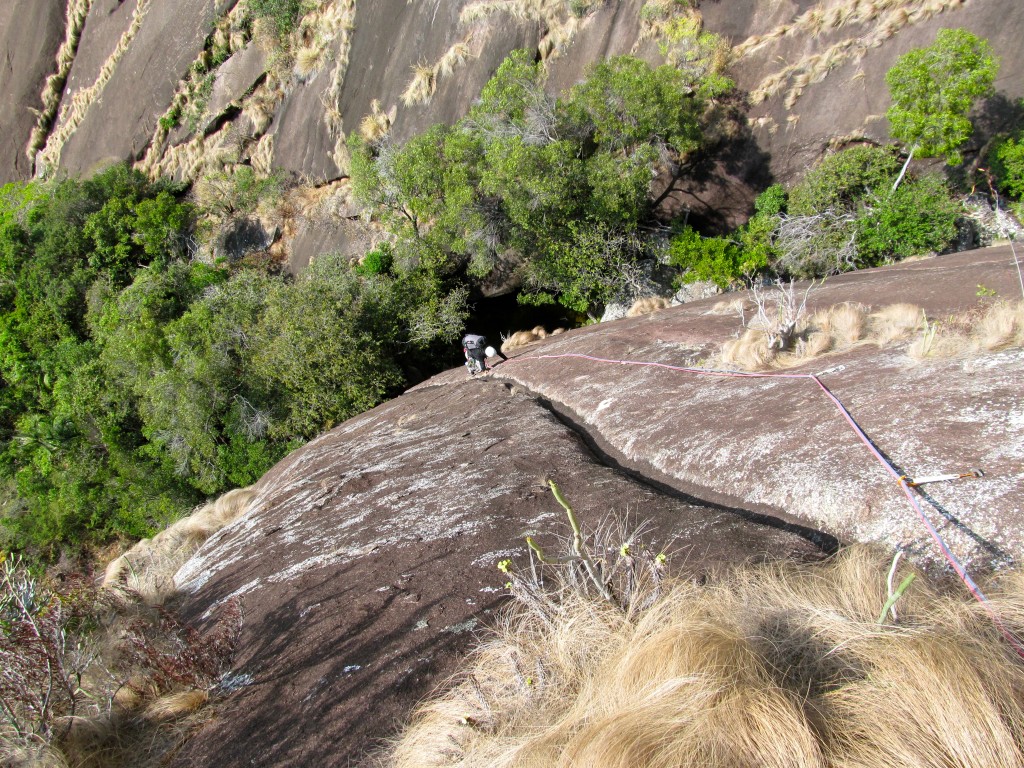 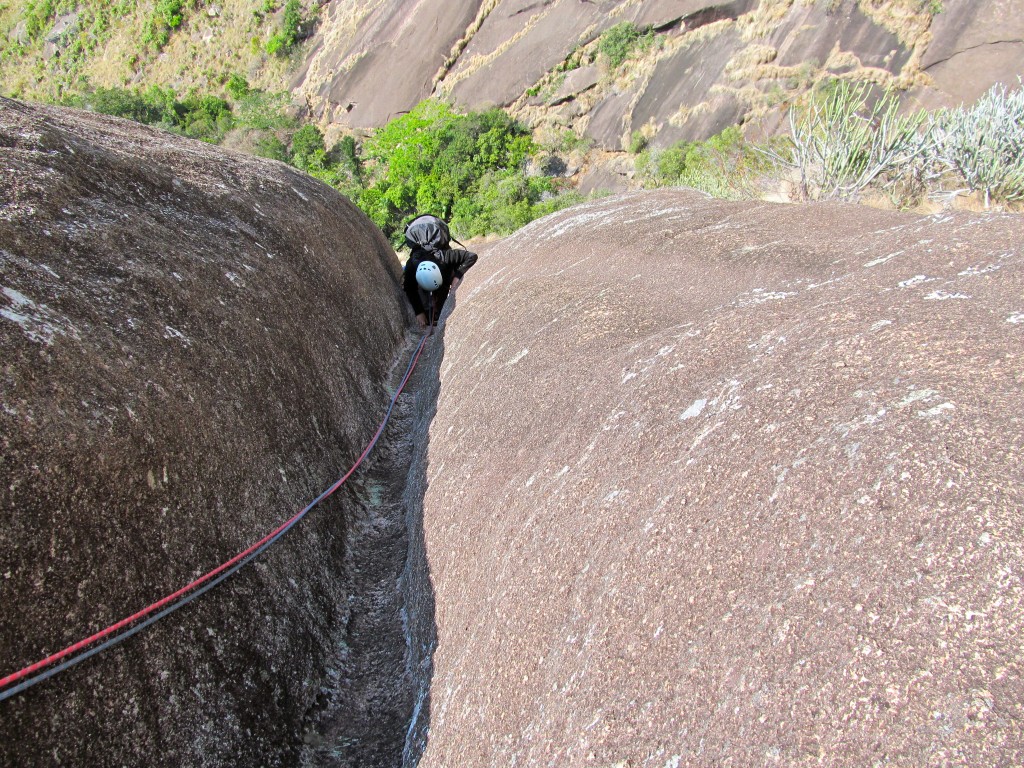 Shirley in a typical water groove encountered on Cas Nullard route. This is I think pitch 2 (Sept. 2011). 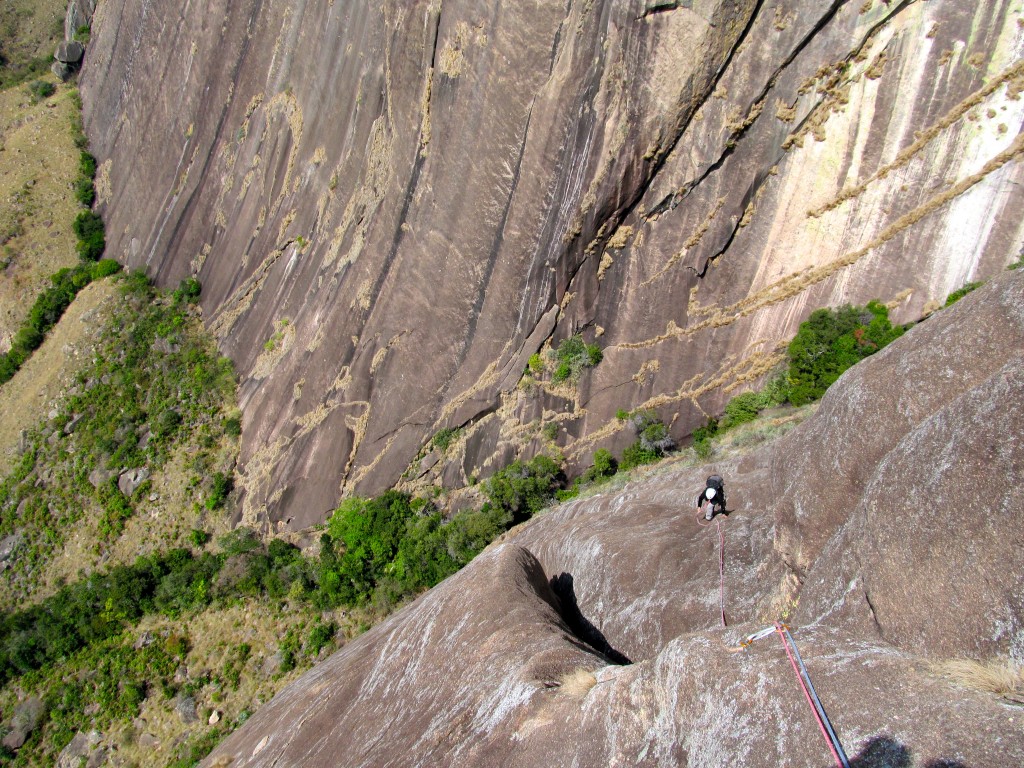 Somewhere midway (ish) up Cas Nullard with the base of the (main) Tsaranoro Walls visible below (Sept. 2011). 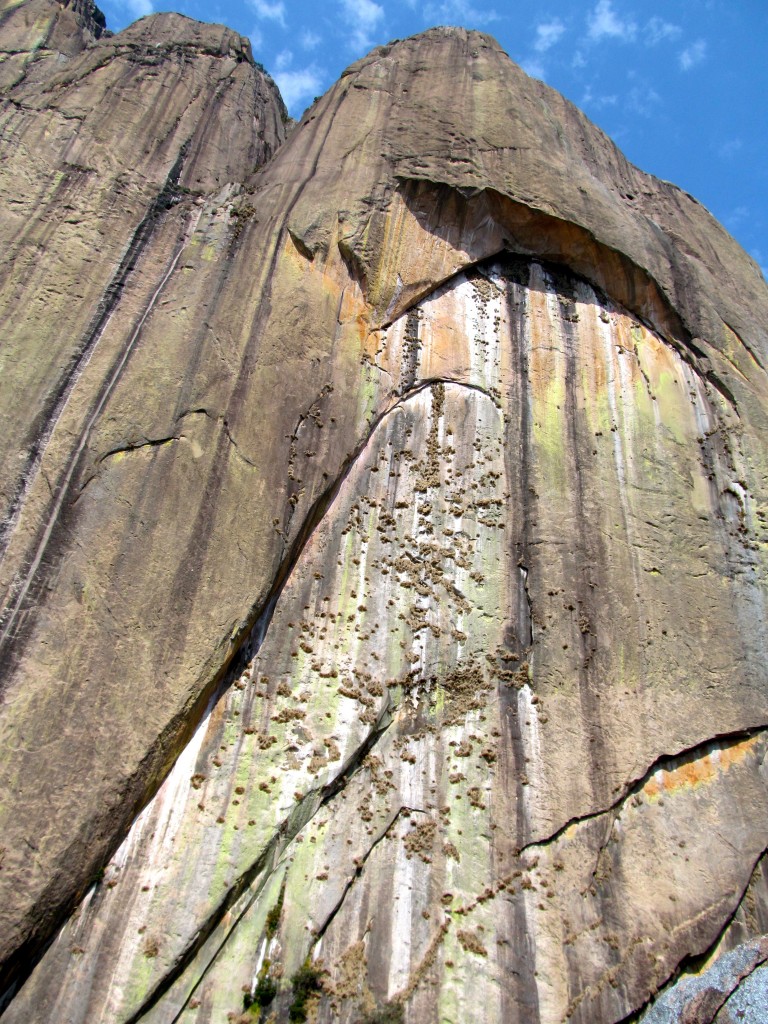 Looking up at the route Bravo Les Filles (put up by Lynn Hill & co) route on the Tsaranoro Nord. The line glances the huge roof on its left side (Sept. 2011). 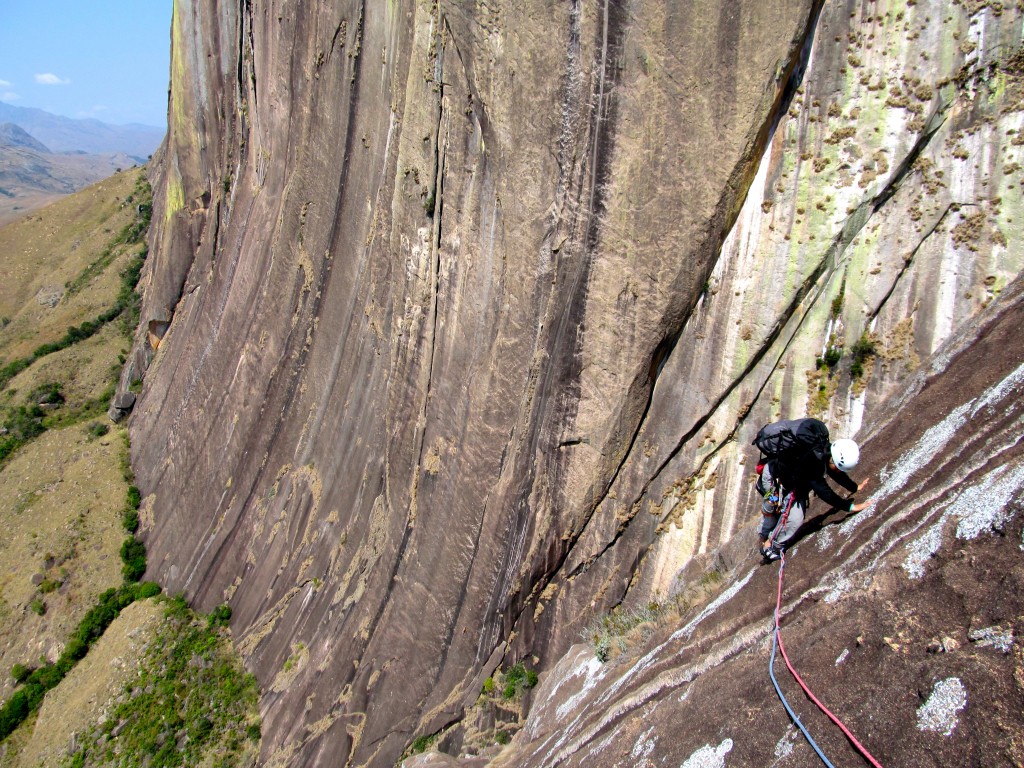 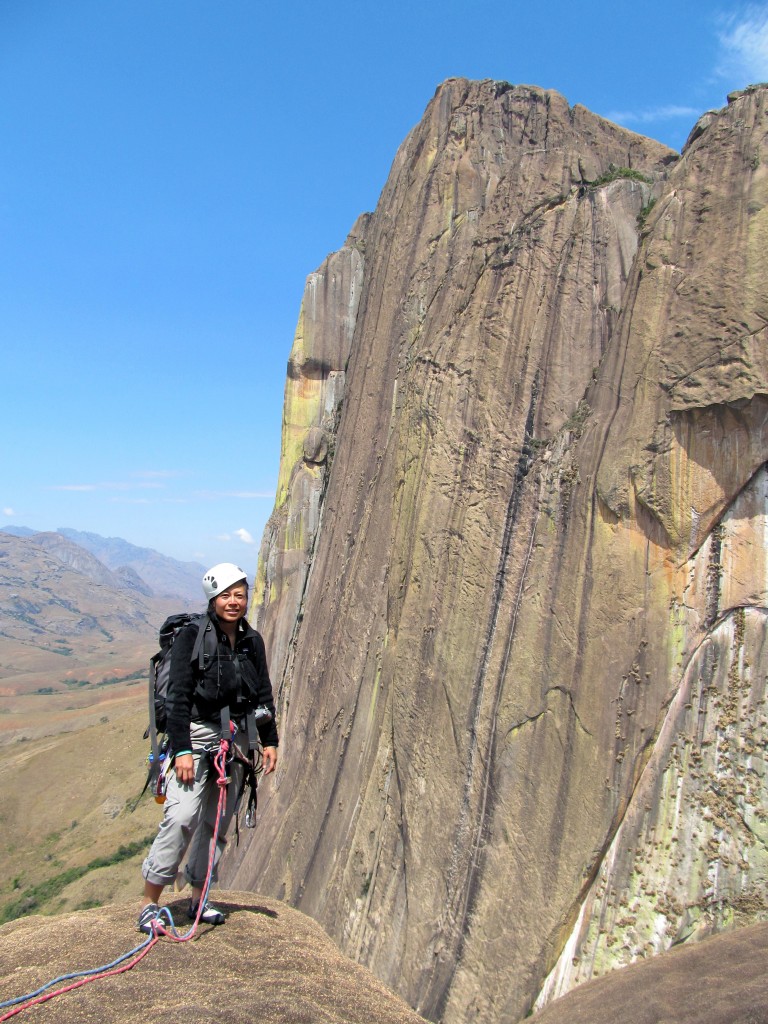 Shirley on the upper reaches of Cas Nullard with the Out Of Africa route (on Tsaranoro Kely) visible in background (among others; Sept. 2011). 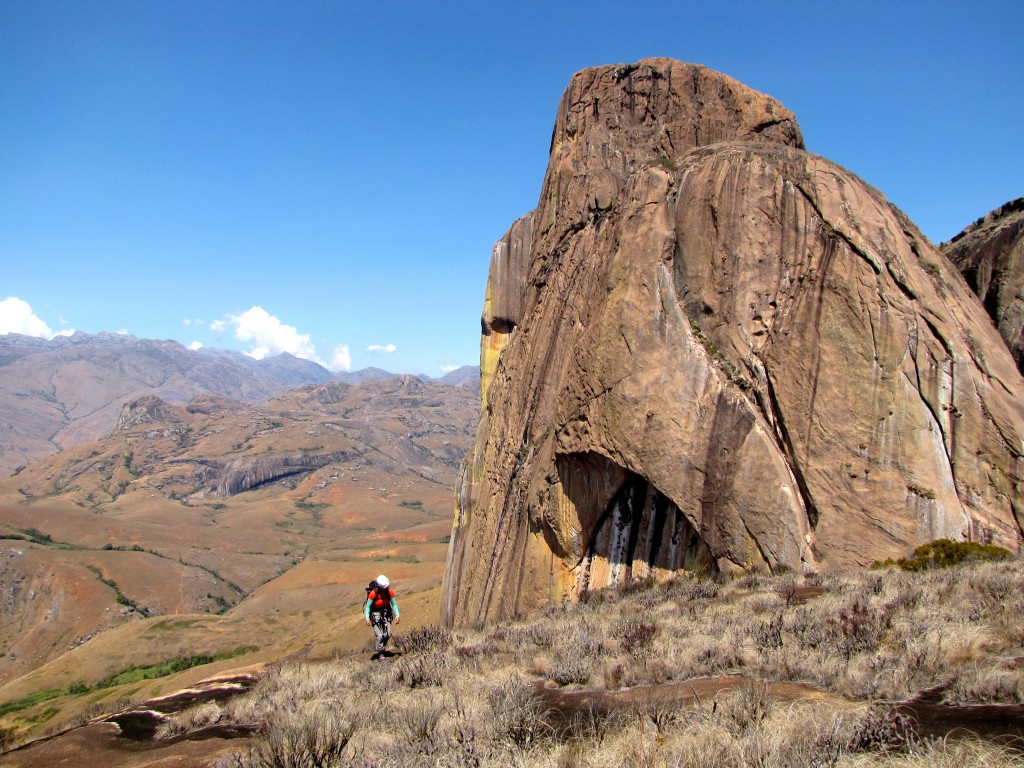 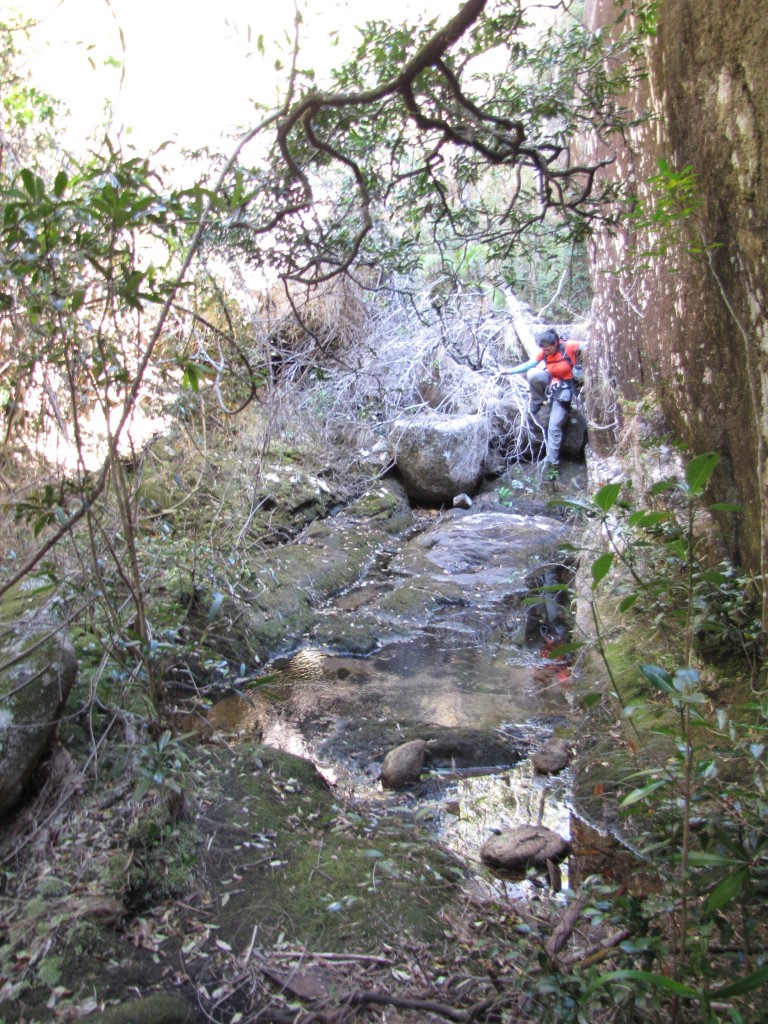 Brushy & swampy descent gully/wash...Shirley enjoying every minute of it (as did I; Sept. 2011). 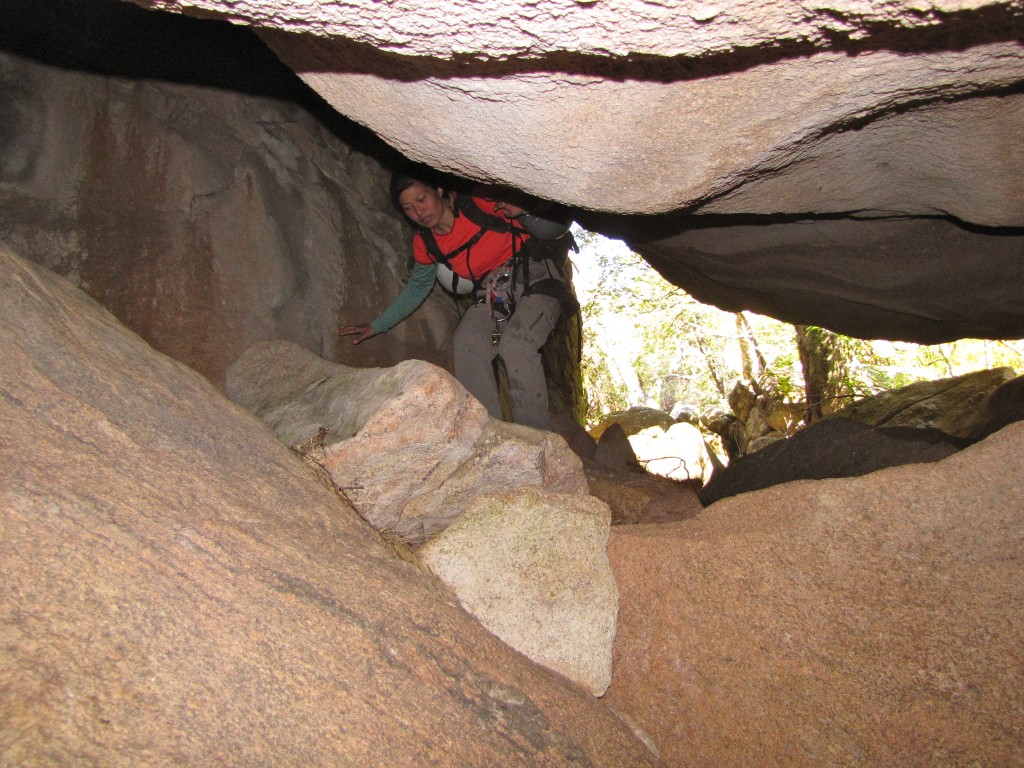 A bit of spelunking in the descent (our version of the descent anyway) gully. Actually there were sections long and dark enough that headlamps came out (Sept. 2011). 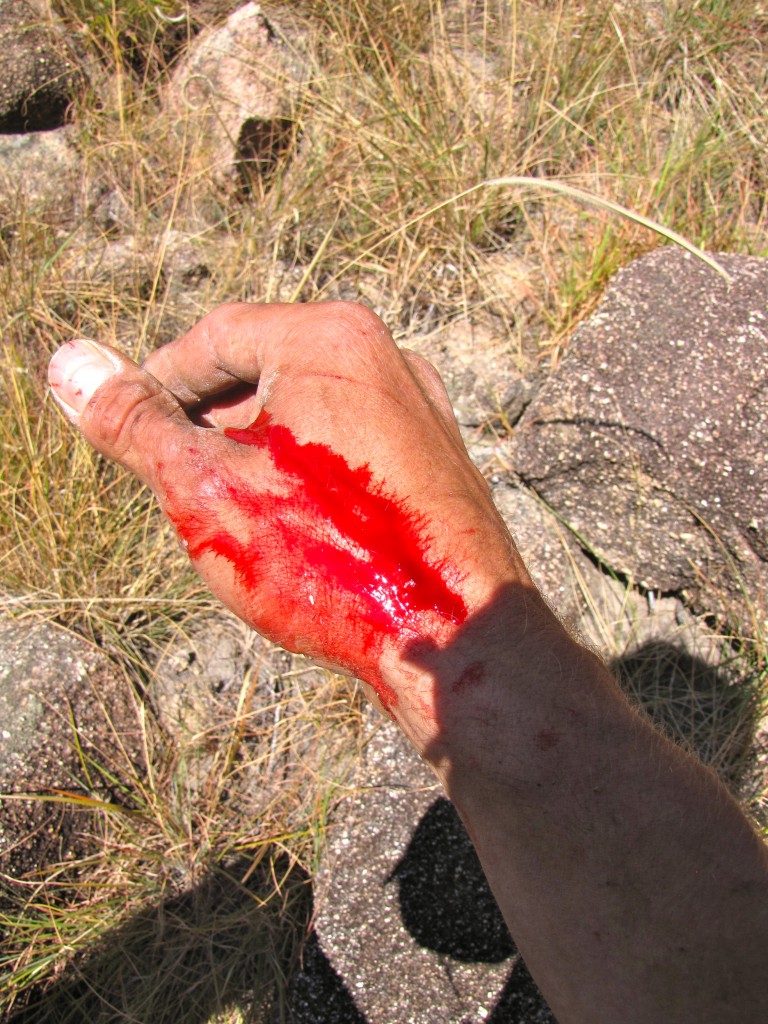 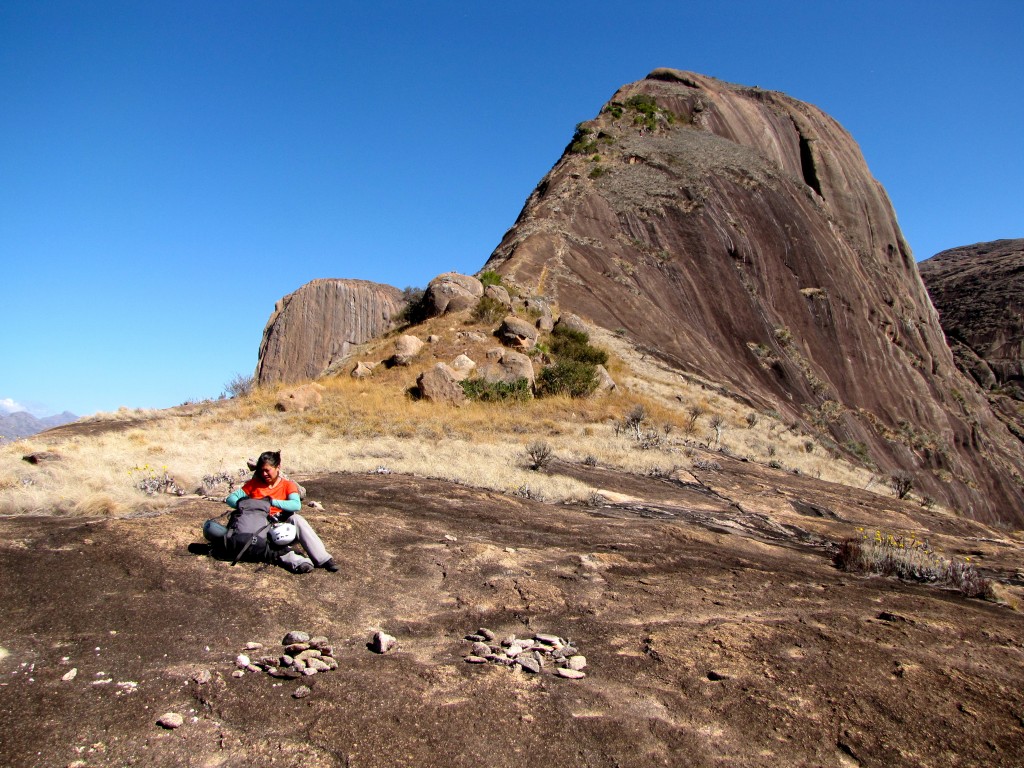 Shirley resting after our bushwhack with the backside of the Lemur Wall visible in background (Sept. 2011). 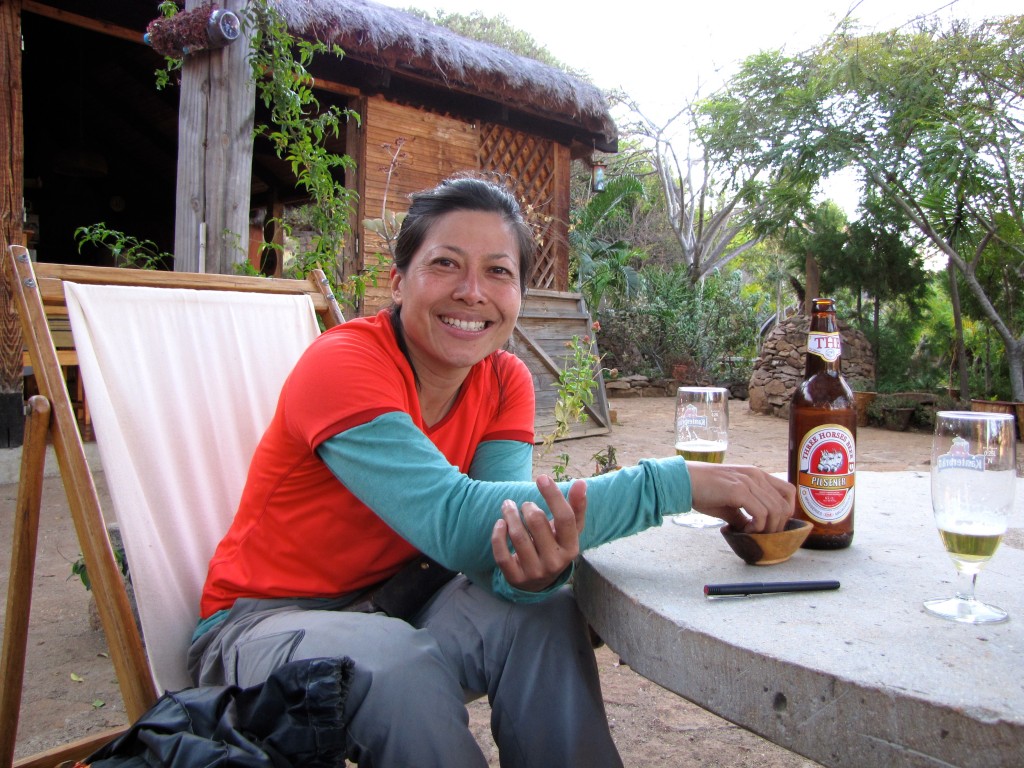 Go to Part 6.
Go back to Madagascar page.