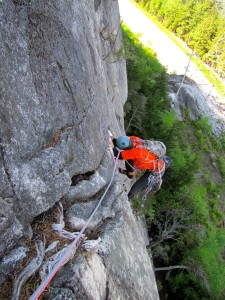 Yours truly following the short but nice pitch 3 of Hairpin - a 5.9 finger traverse above a small roof (June 2011).

Never been to this Squamish mecca everyone keeps talking about. Don’t know why? Certainly it was not the driving distance…it’s roughly the same as Washington Pass and a helluva lot closer than say City Of Rocks. Really we have no excuse. Finally, last weekend we headed out Friday night and after some (unintentional) sightseeing in Vancouver, we arrived in Squamish at 2 am-ish on Saturday morning. We tried the Snake, a 5-pitch trad line on The Apron but found it flowing about 500cfs and thus near flood stage. We bailed from midway up pitch 3. We then moved on to The Papoose formation just down the road and climbed the short but very sweet Hairpin route, a 5-pitch 5.10a line. A very fun opening 5.8 traversing crack pitch, followed by some highly enjoyable finger cracks, a 5.9 roof, a scenic 5.7 hand crack traverse, and the whole package is topped off by a 5.10a slab pitch (reportedly soft but I found it plenty slick). So good! We’ll be back. 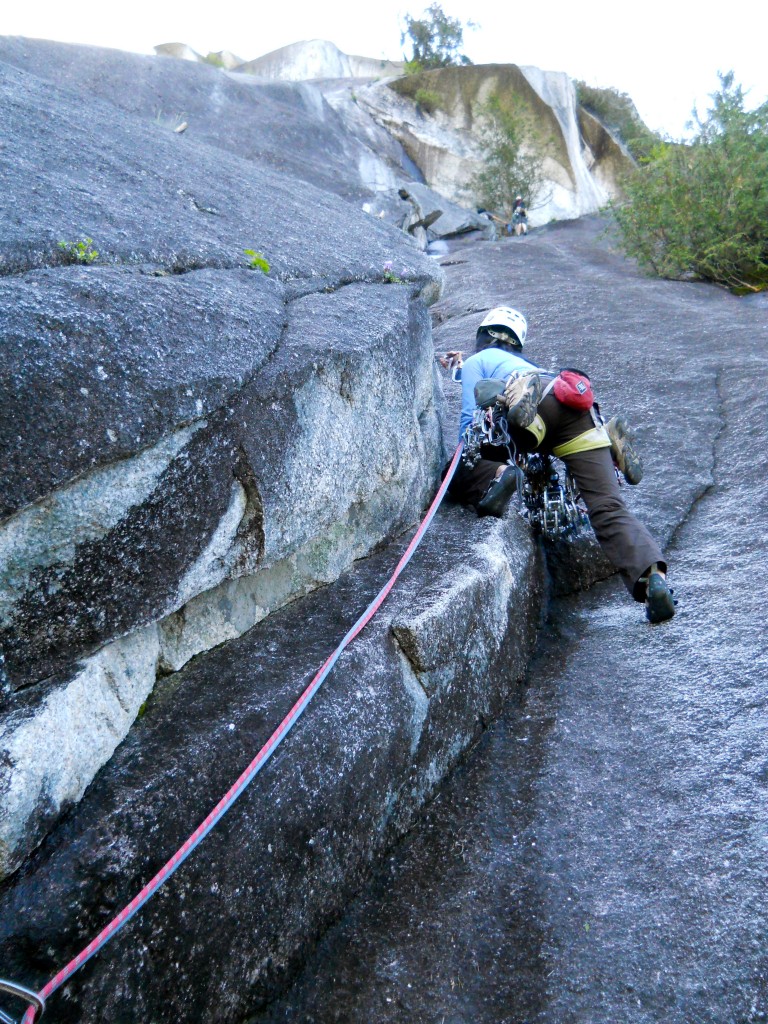 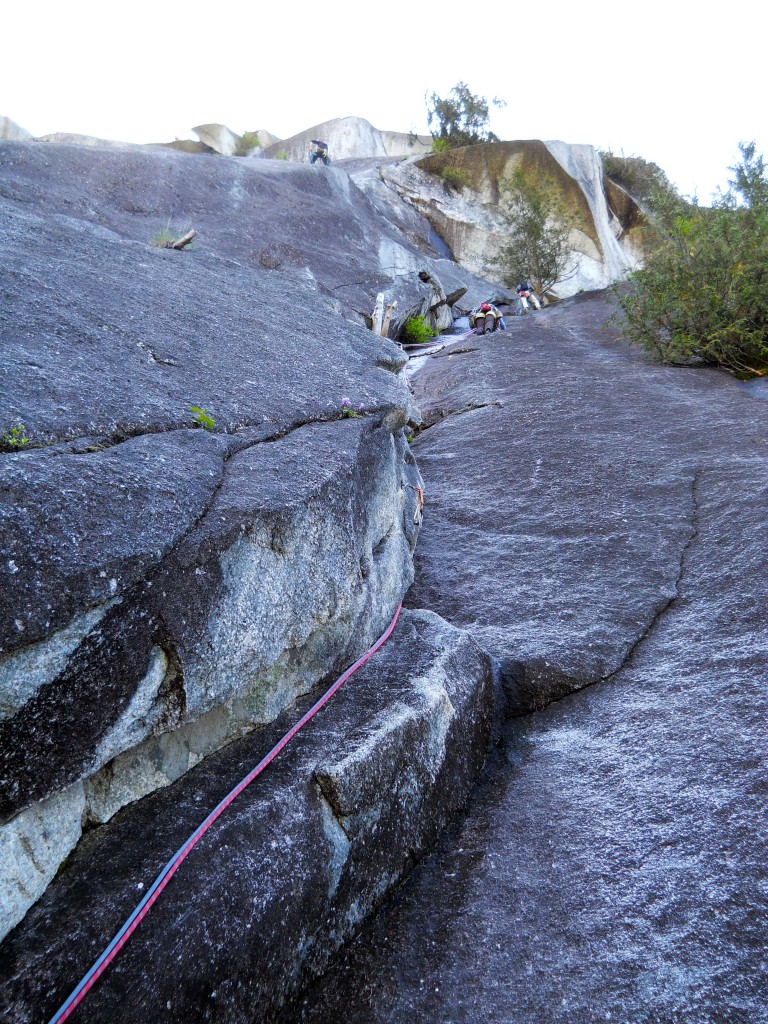 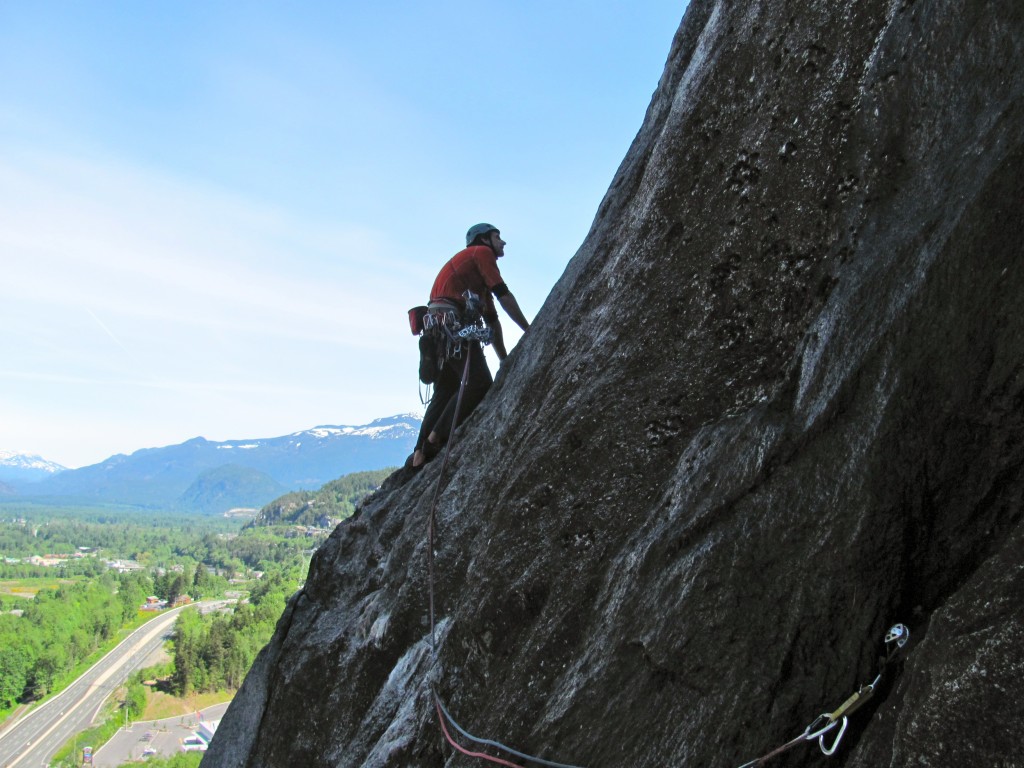 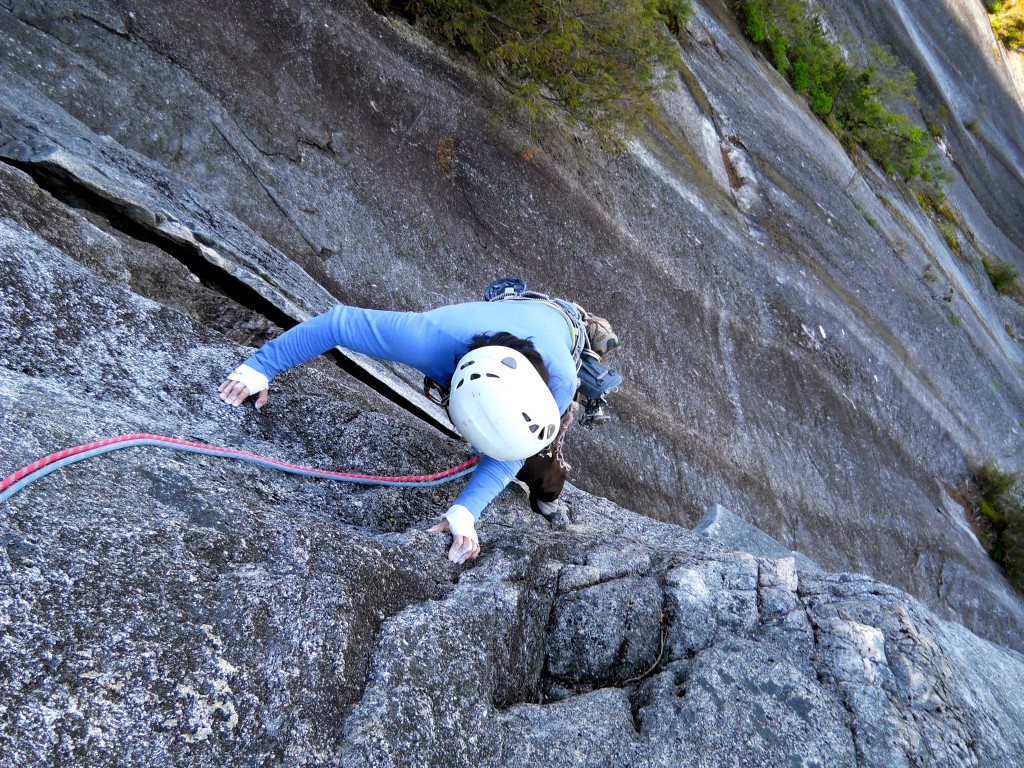 Shirley topping out on the short pitch 3 of Snake (5.9). This was our highpoint as the crux of the next pitch's traverse was wet and it looked wetter up higher (June 2011). 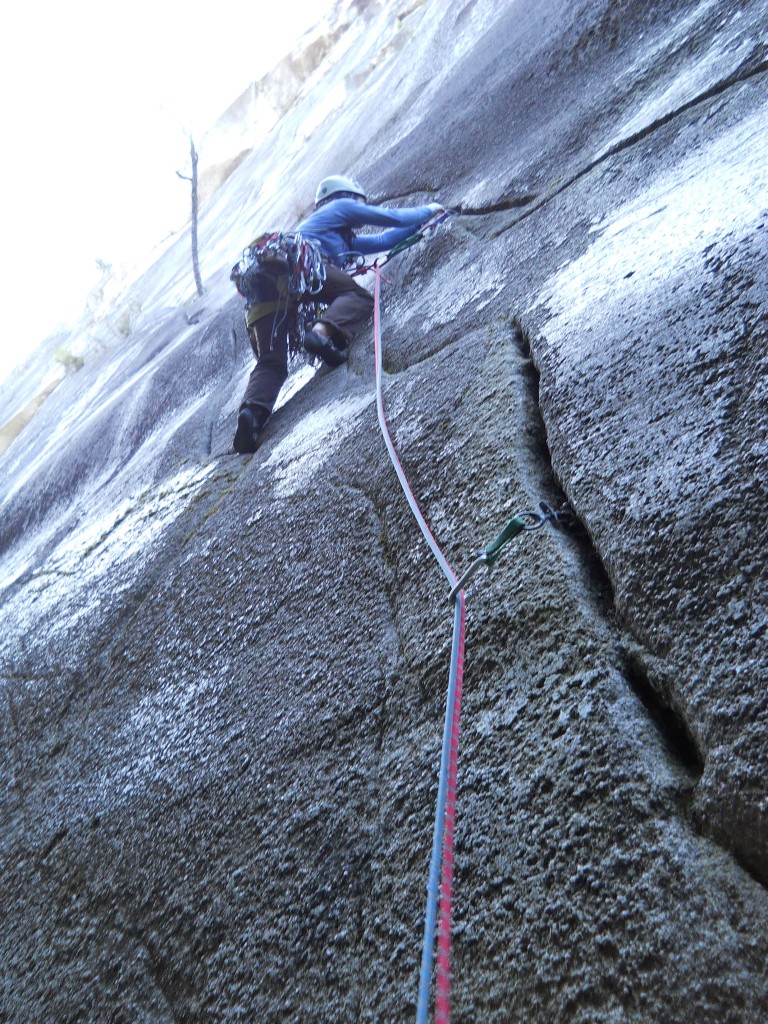 Shirley starting the lead of pitch 1 of Hairpin. The glistening rock is not wet...no, it's coated with some teflon film in spots (June 2011). 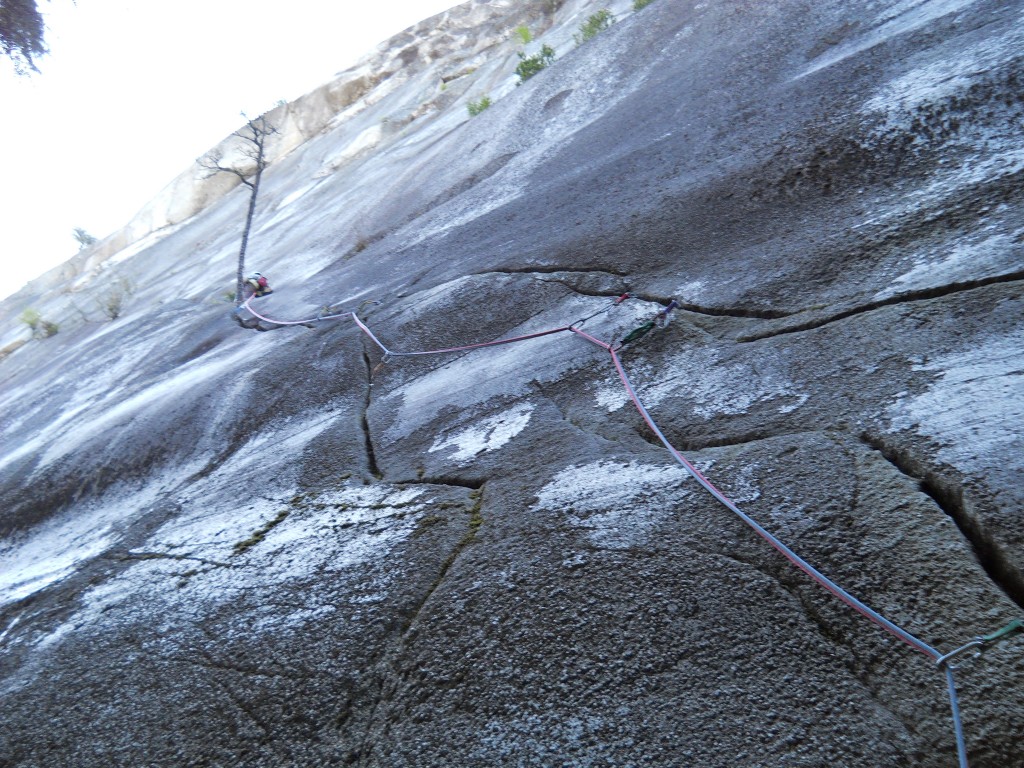 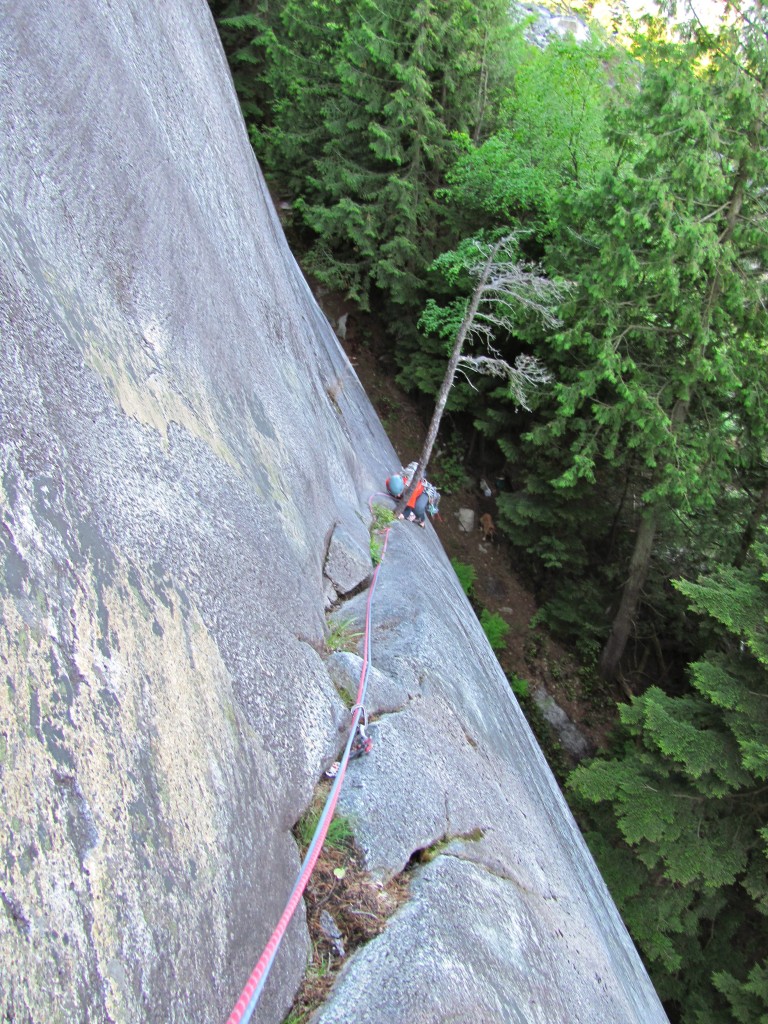 Yours truly following the traversy pitch 1 of Hairpin (June 2011). 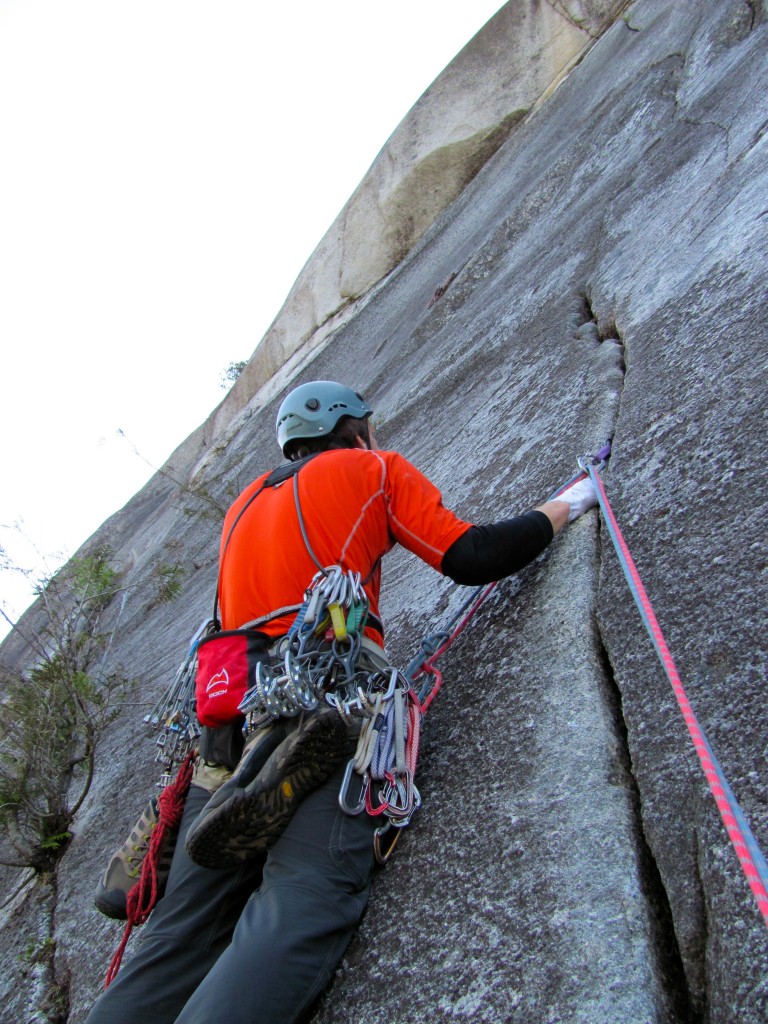 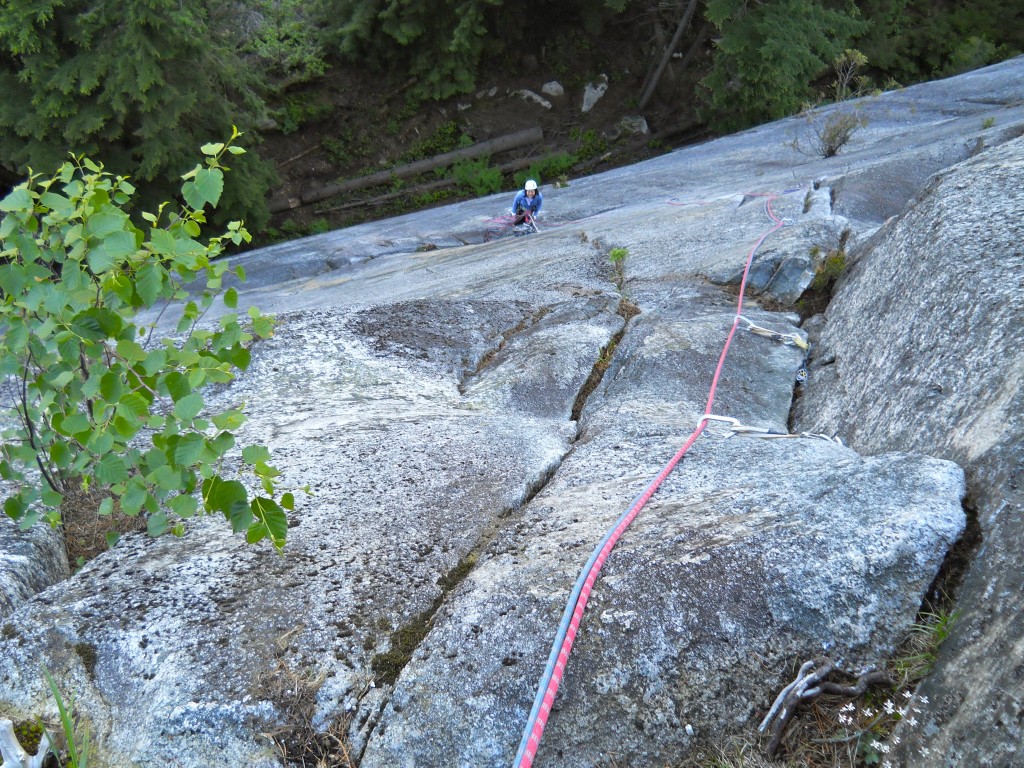 Looking back at Shirley from near the top of the excellent pitch 2 of Hairpin (June 2011). 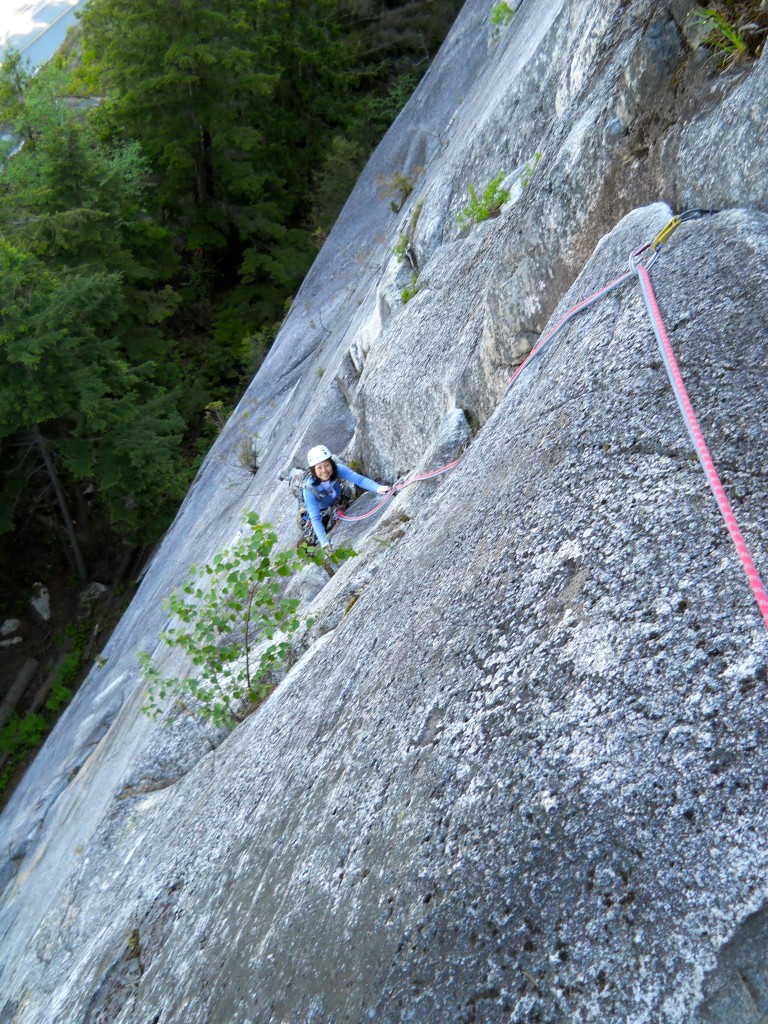 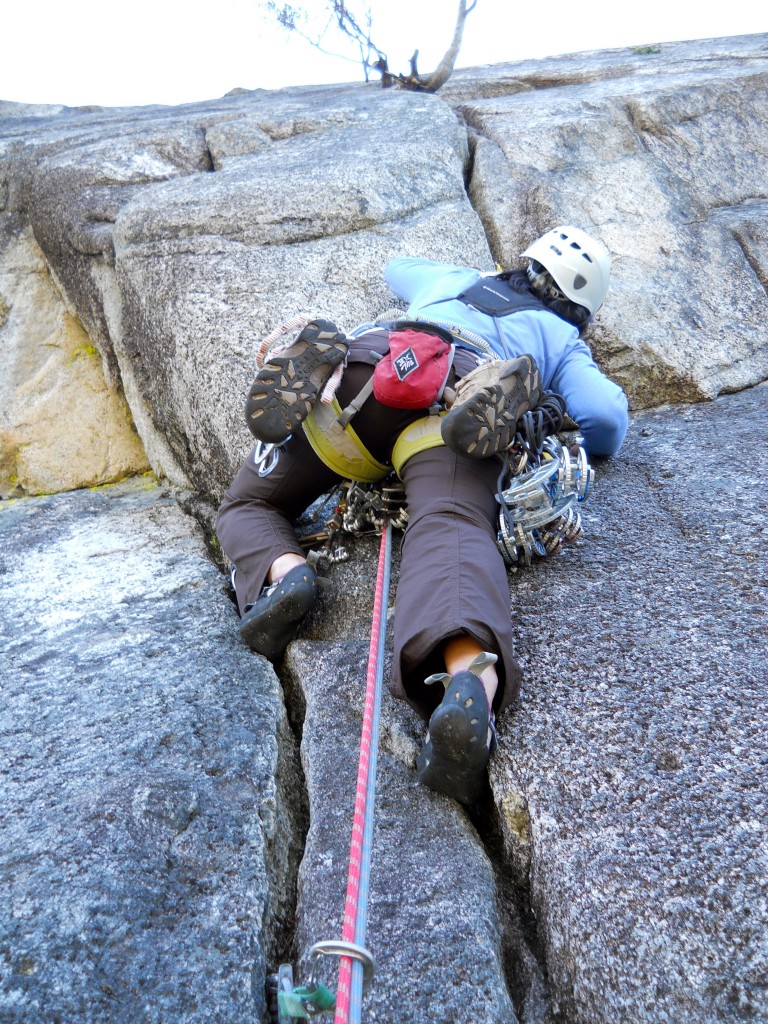 Shirley starting the third pitch of Hairpin (5.10a) route. A nice if short 5.9 roof followed by a finger crack traverse (June 2011). 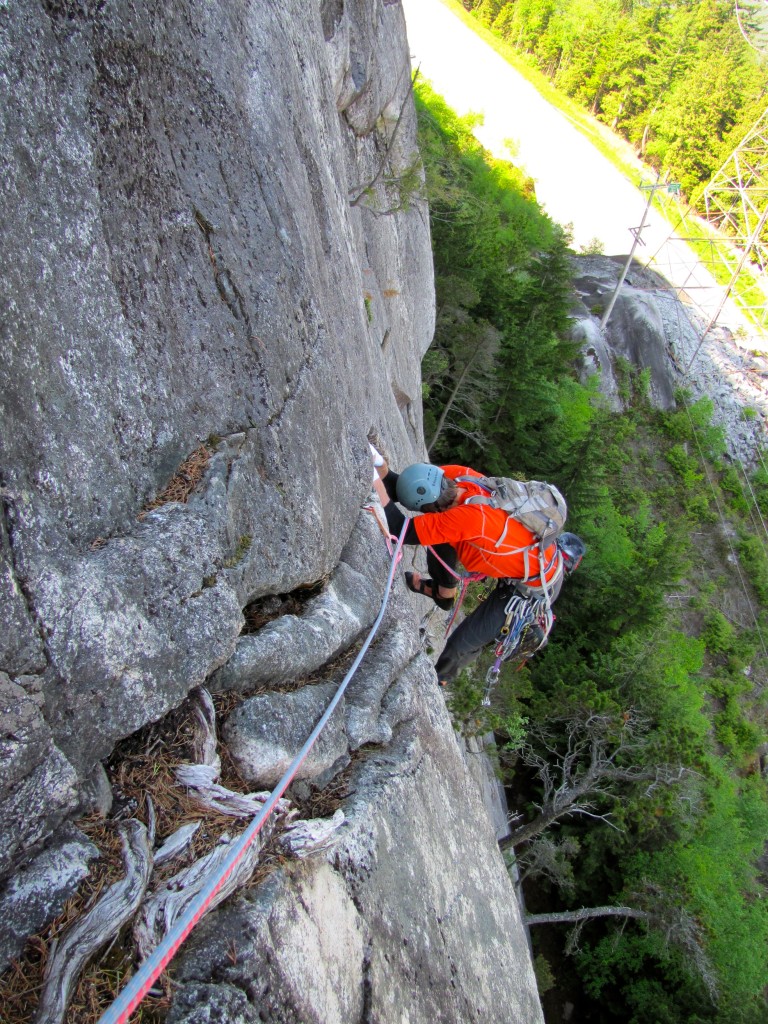 Yours truly following the short but nice pitch 3 of Hairpin - a 5.9 finger traverse above a small roof (June 2011). 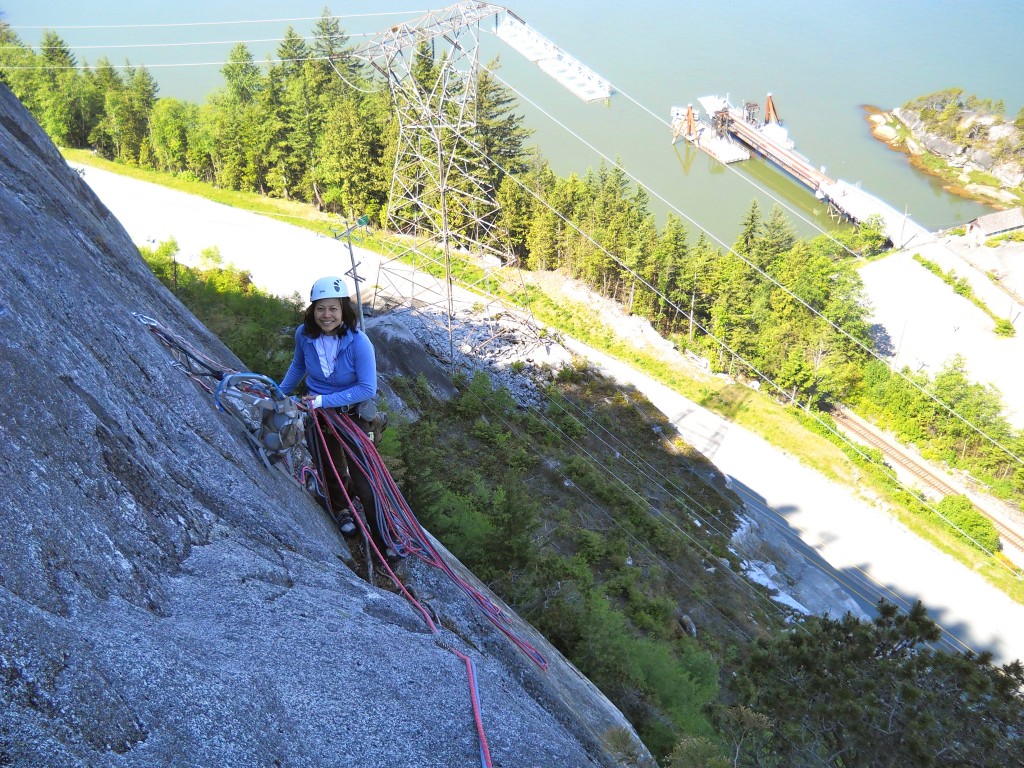 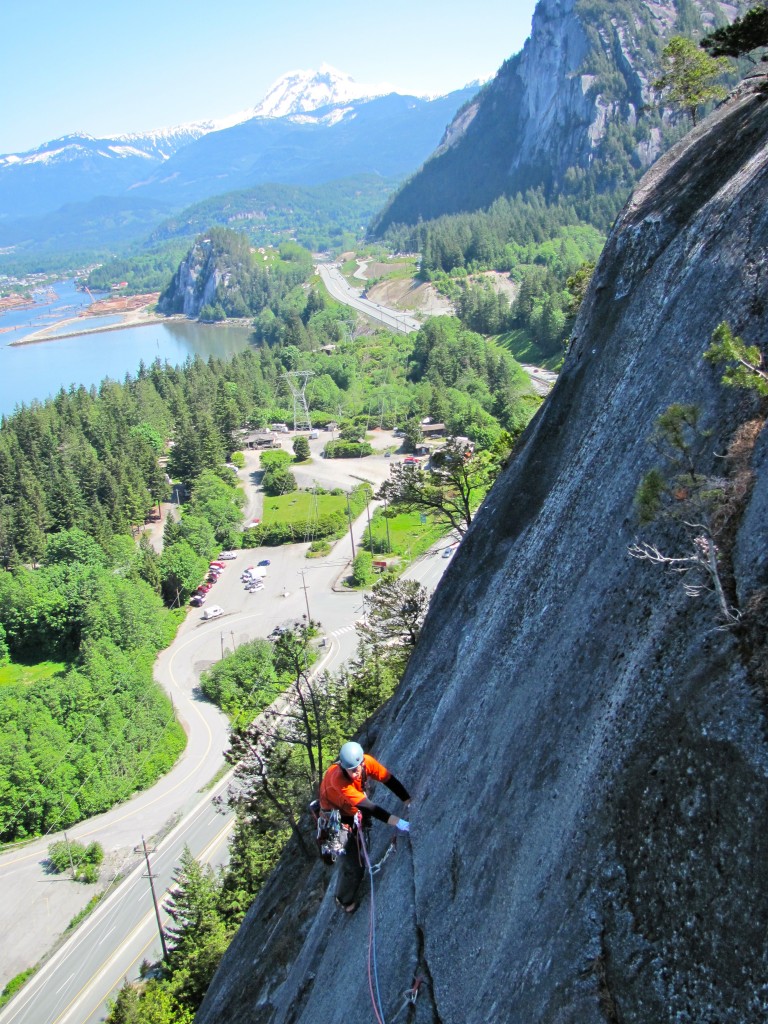 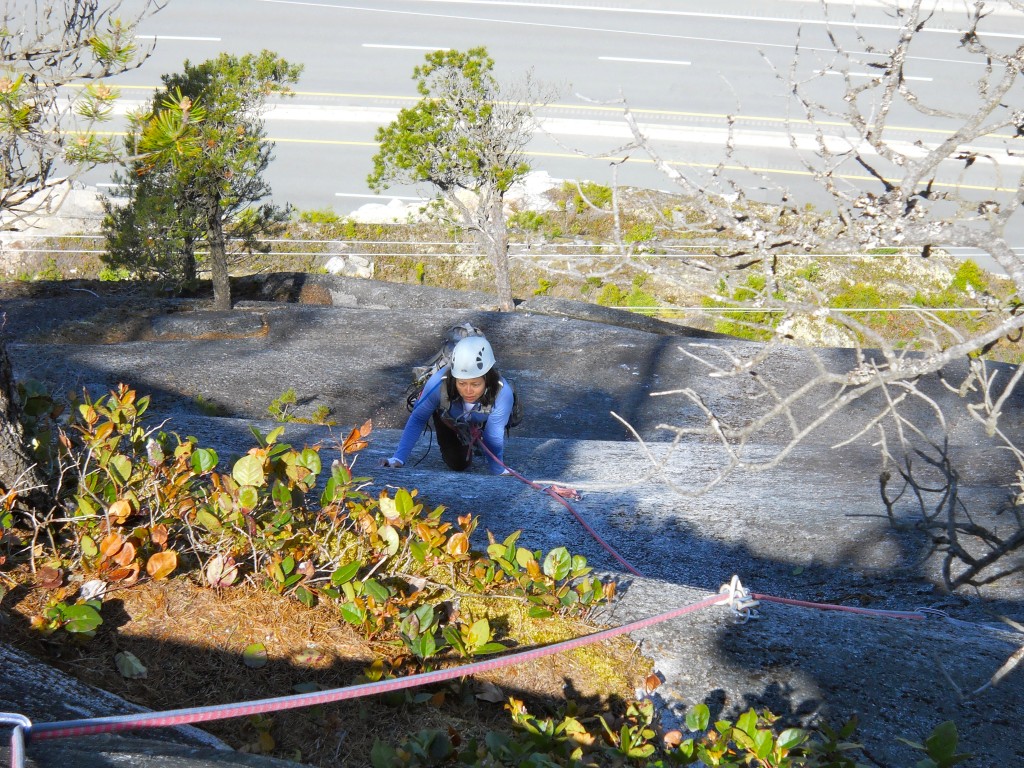