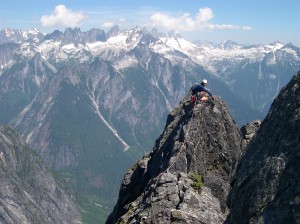 Leading the knife-edge ridge traverse section during our descent of Northeast Ridge of Triumph.

If it’s not here it might be in the Washington Pass pages or Alpine Lakes Wilderness pages or it’s simply impossible and hasn’t been done! The small selection of trip reports below is a mix of some easy rock climbs & snow slogs. Hoping to see it grow over the years. 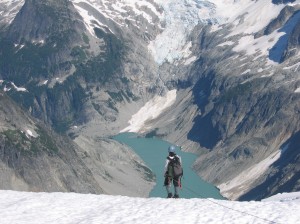 The long hike out - Shirley traversing the snow and heather slopes high above Terror Creek on our hike out day. Inspiration is in center of photo in far background (July 3, 2006).

Shirley on the descent down Eldorado's East Ridge. Mounts Forbidden (left) and Torment visible. Morain Lake is down below. The junction of Eldorado and Inspiration Glaciers also visible (July 2007).