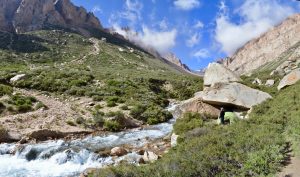 Unlike all previous climbing trips, the jet lag seemed to be working against us this time around – perhaps copious wine consumption & altitude might have contributed. We’d have trouble falling asleep and have a hell of a hard time waking up. As a result day 2 also started late and we ended up hiking up to El Zorro – 45 minutes above camp and right behind the Jesus statue. This was a mostly forgettable route (blocky, ledgy) with the exception of the final two pitches which were nice enough. 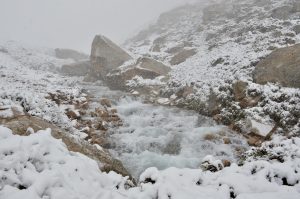 Day 3 was meant to be more meaty – alarm clocks were set, we skipped (…or skimped on) the wine, and went to sleep early…only to wake up to a tent nearly collapsed under a foot of snow and 30 meter visibility outside. We spent the morning and the early afternoon commiserating with our camp neighbors, Cedric (from Grenoble in France) and Veronica (from Buenos Aires). In the late afternoon, as the snow kept falling, we finally decided to break down camps and drive down to the villages below for some warmth and internet (forecast).

On approach to El Zorro – statue marks the spot! 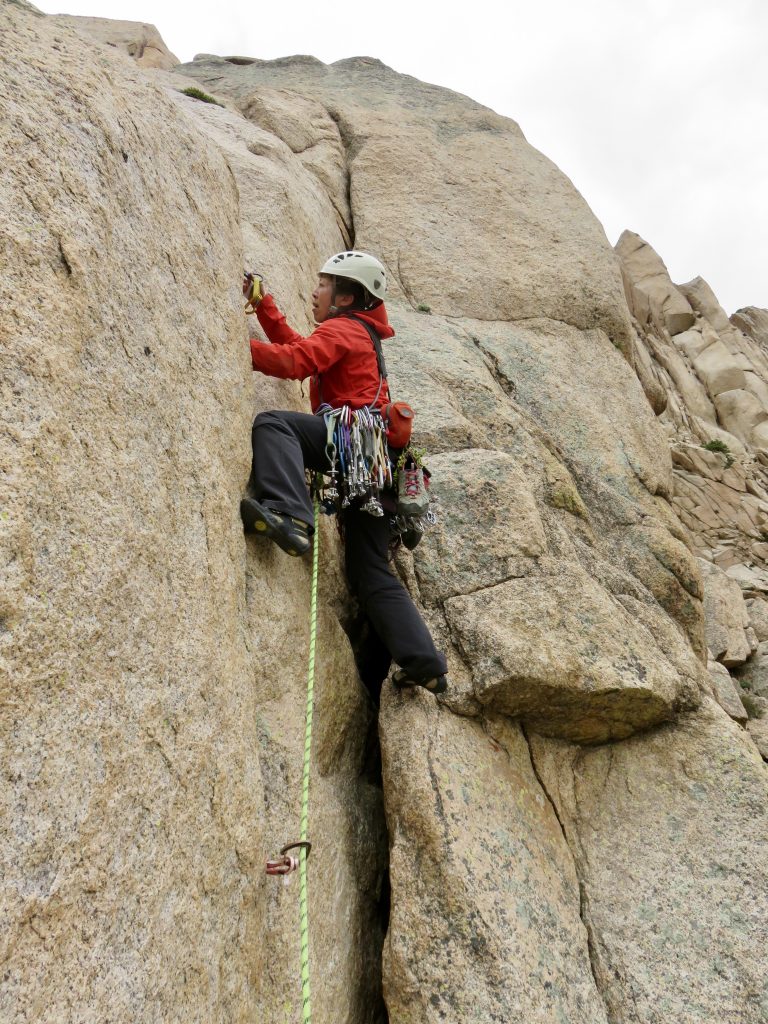 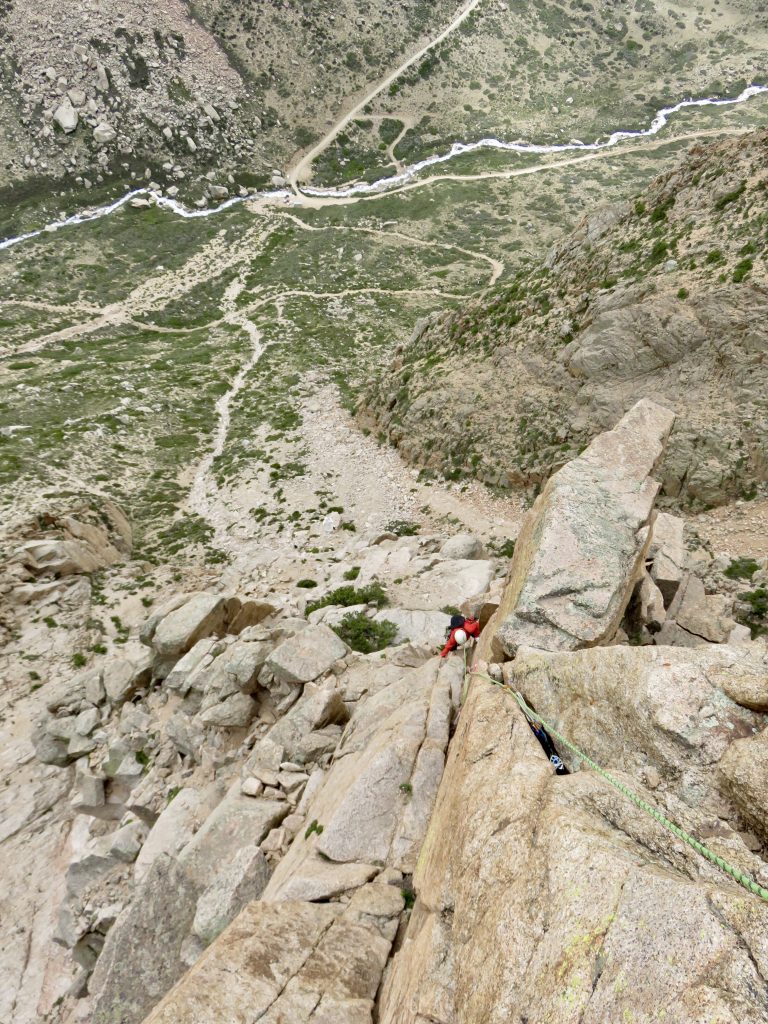 Shirley following a pitch high on El Zorro (pitch before the last one). 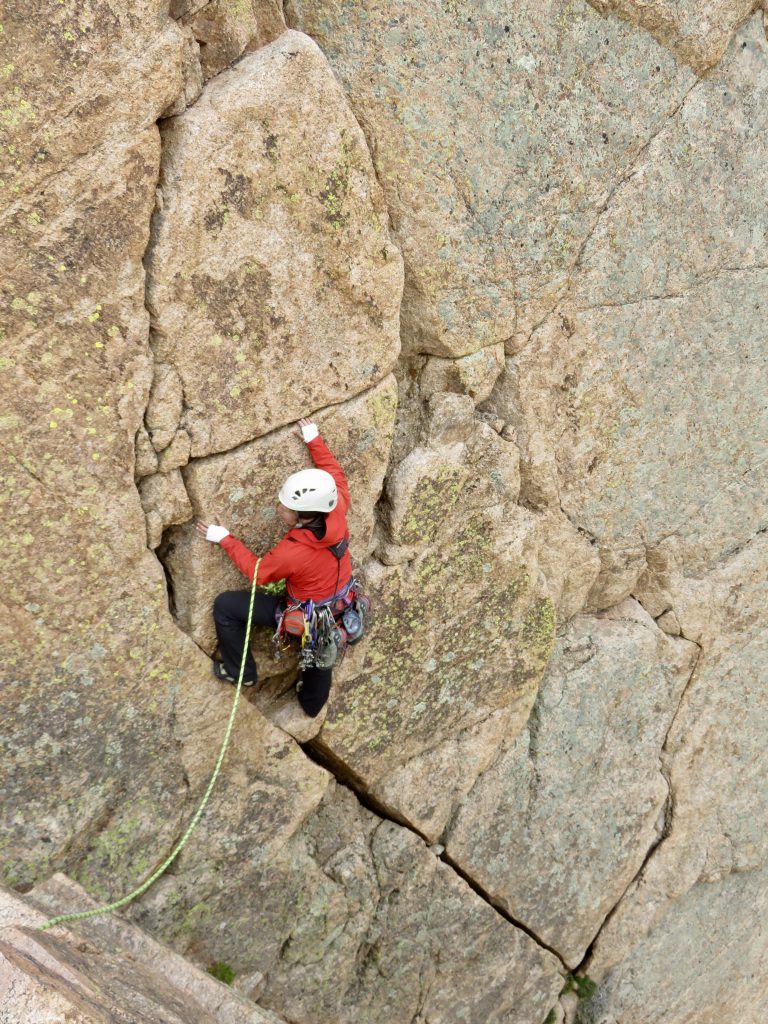 Shirley starting the lead of the final and best pitch of El Zorro (Dec. 2016). 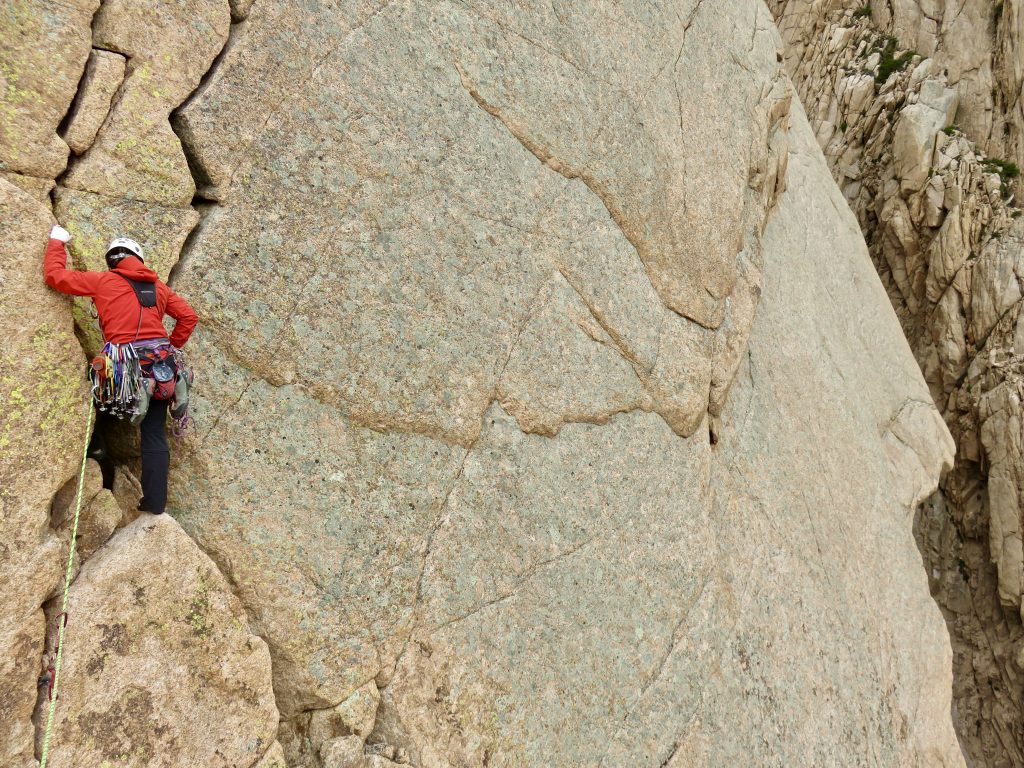 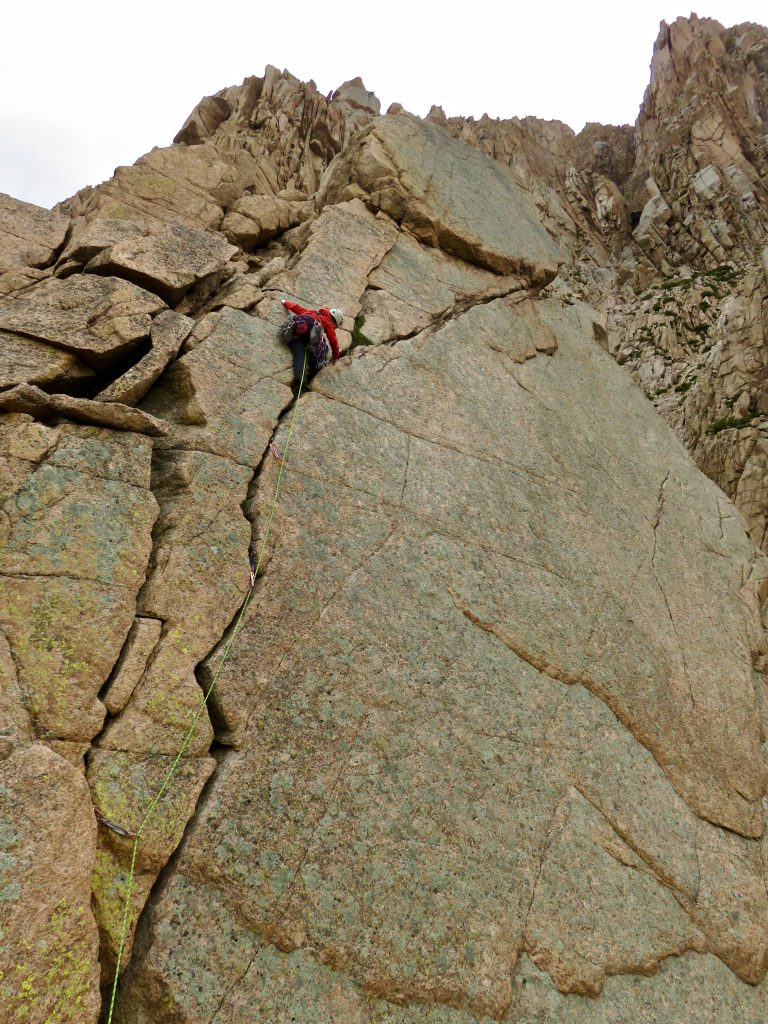 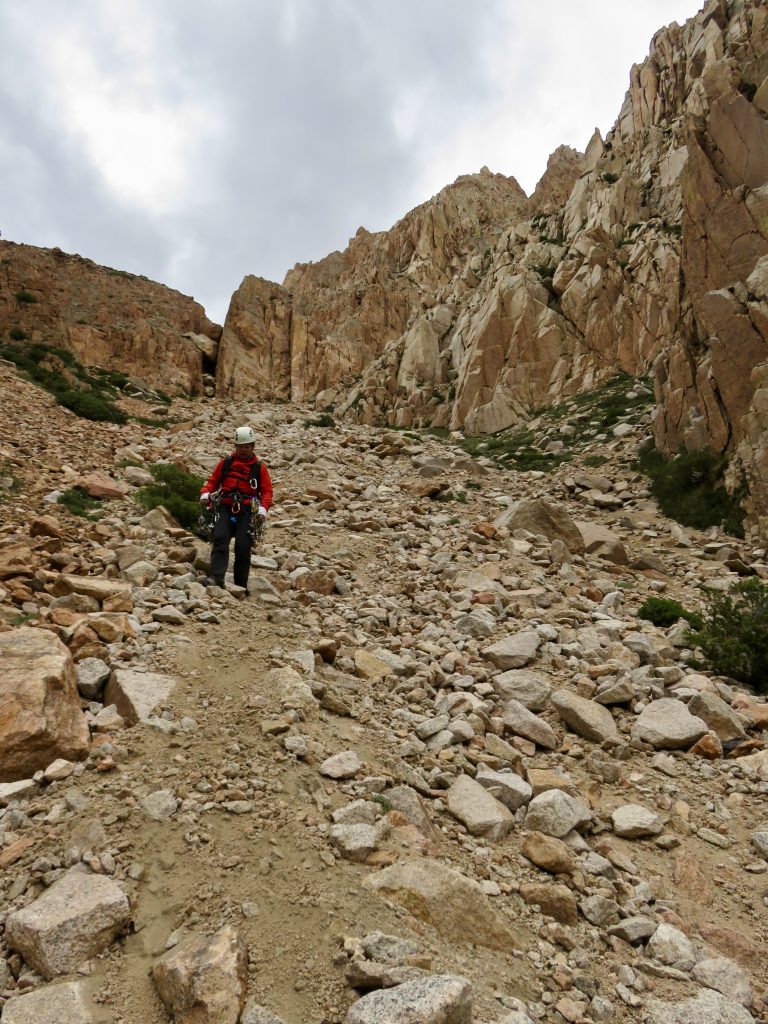 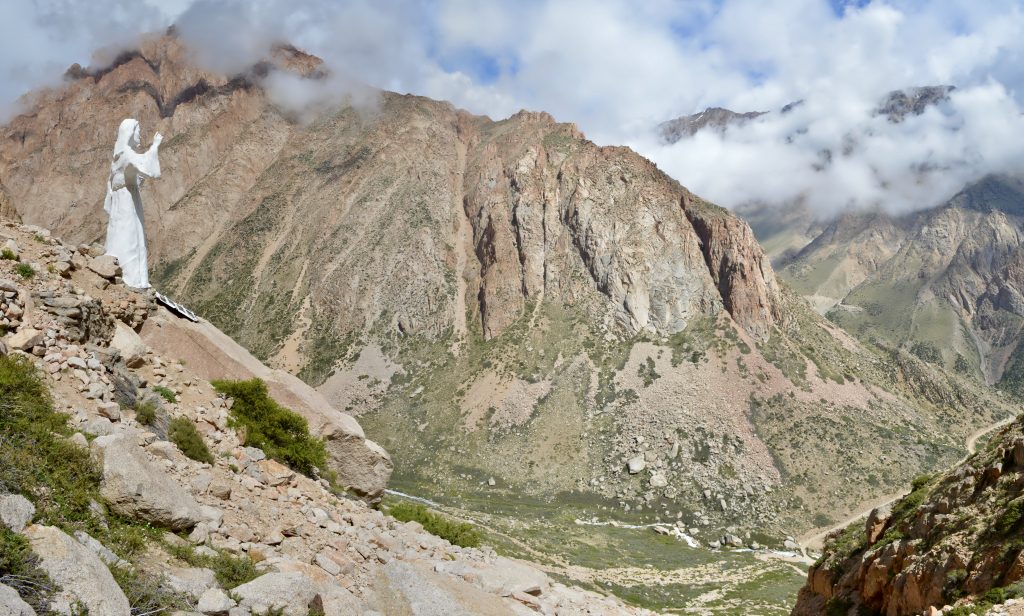 Jesus statue at the base of El Zorro route. Some German climbers, whom we ran into the day before after they had climbed the same route, referred to the statue as Mary.  I guess they were affected by altitude more than us since “Mary” is sporting a goatee (Dec. 2016). 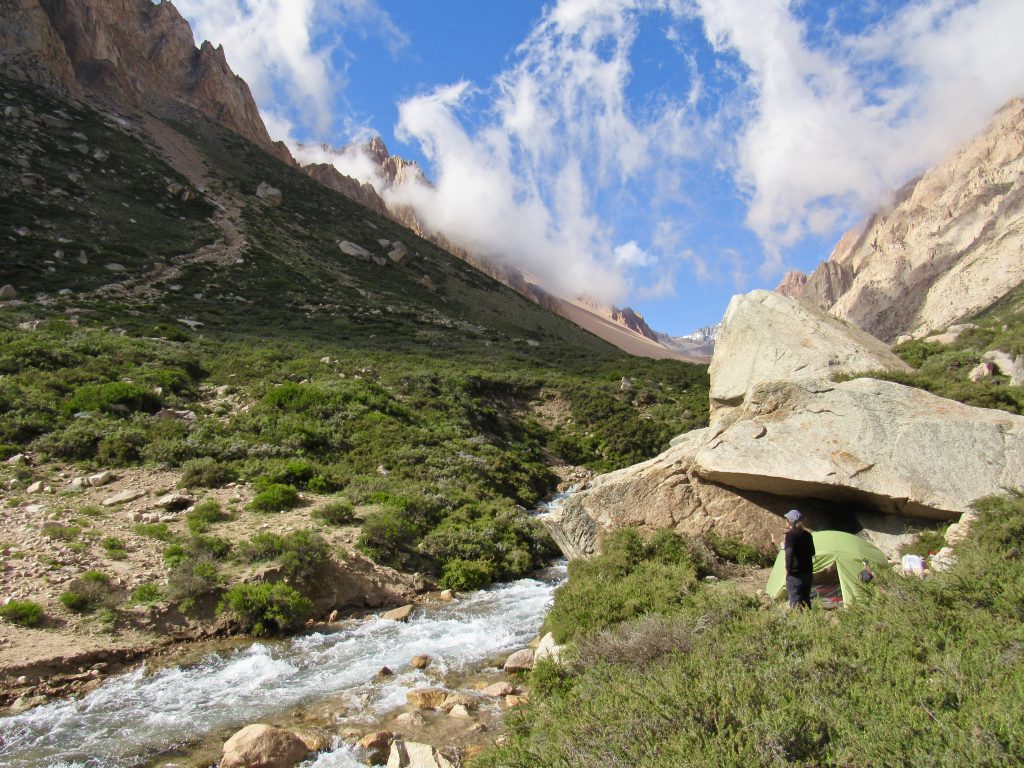 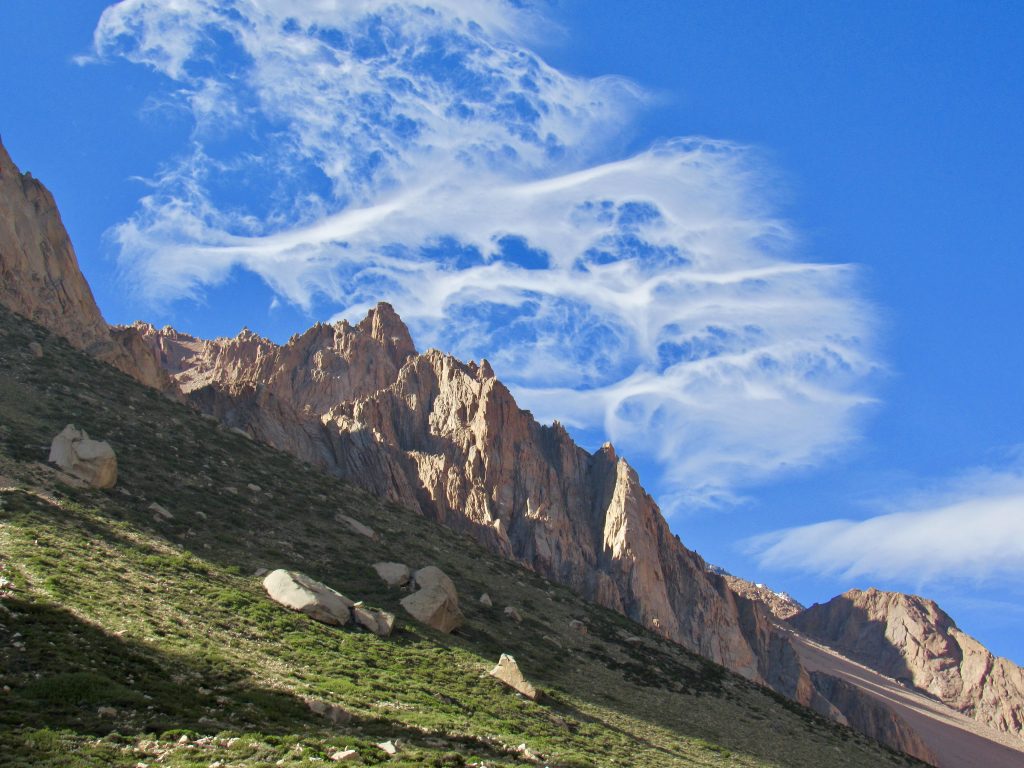 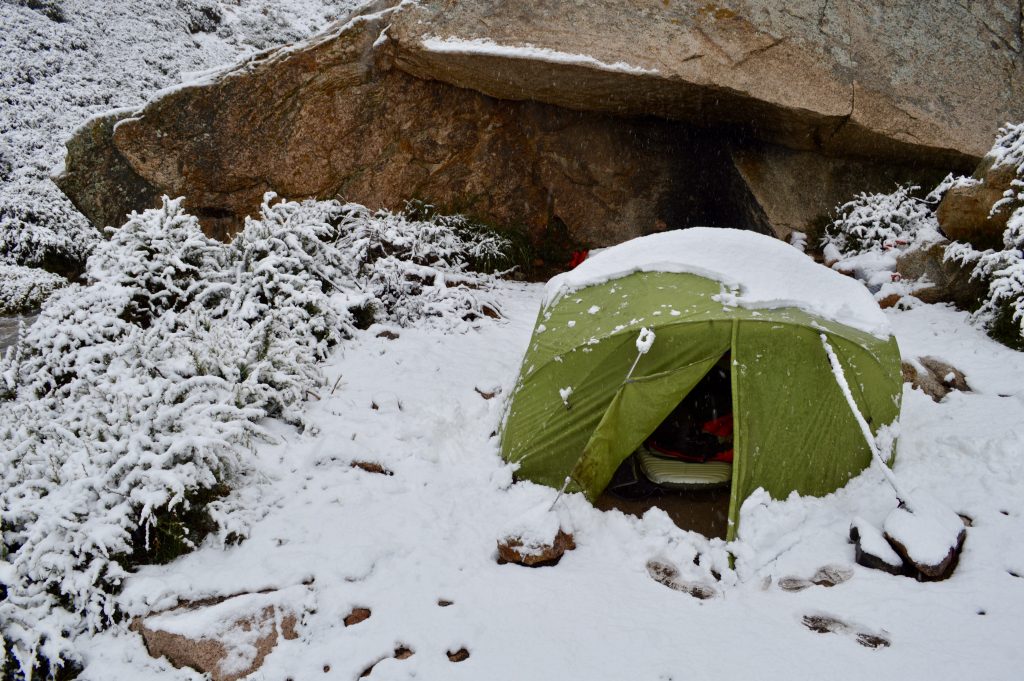 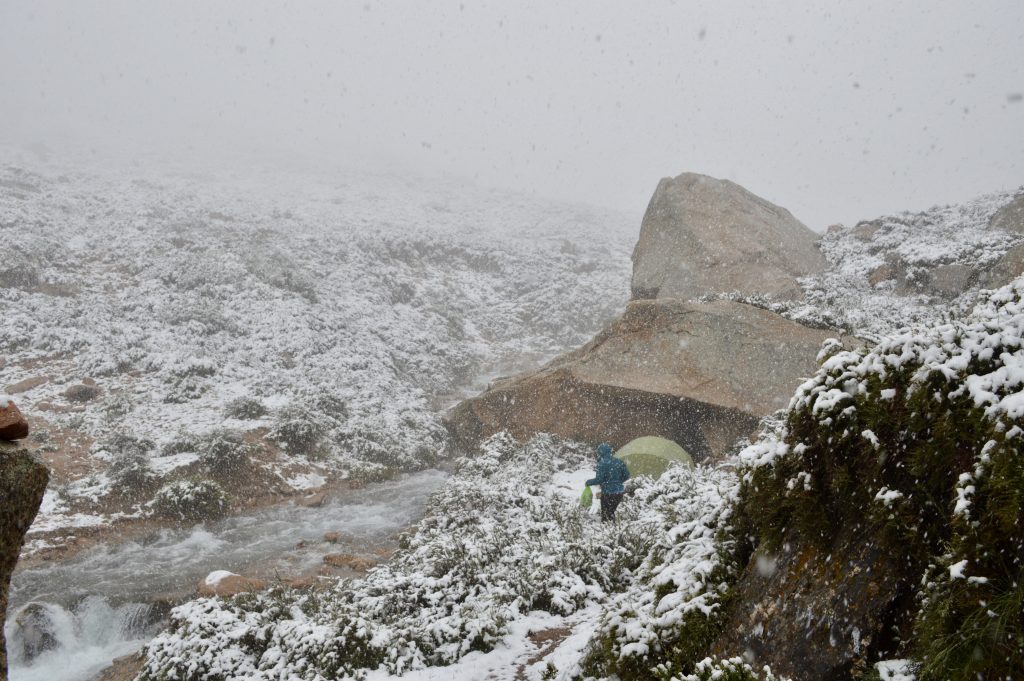 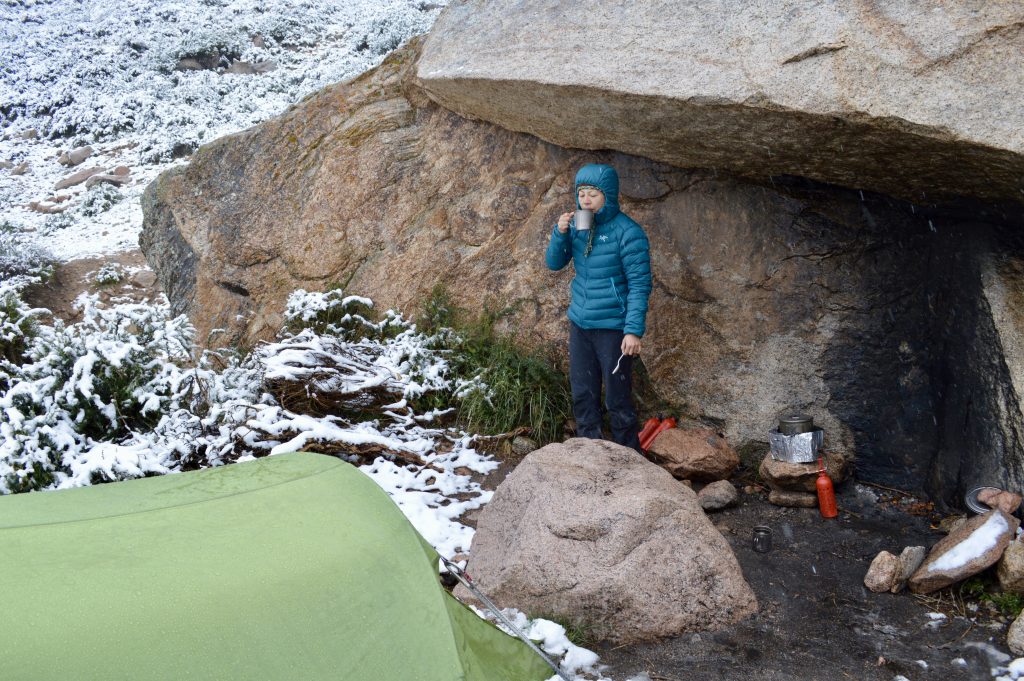 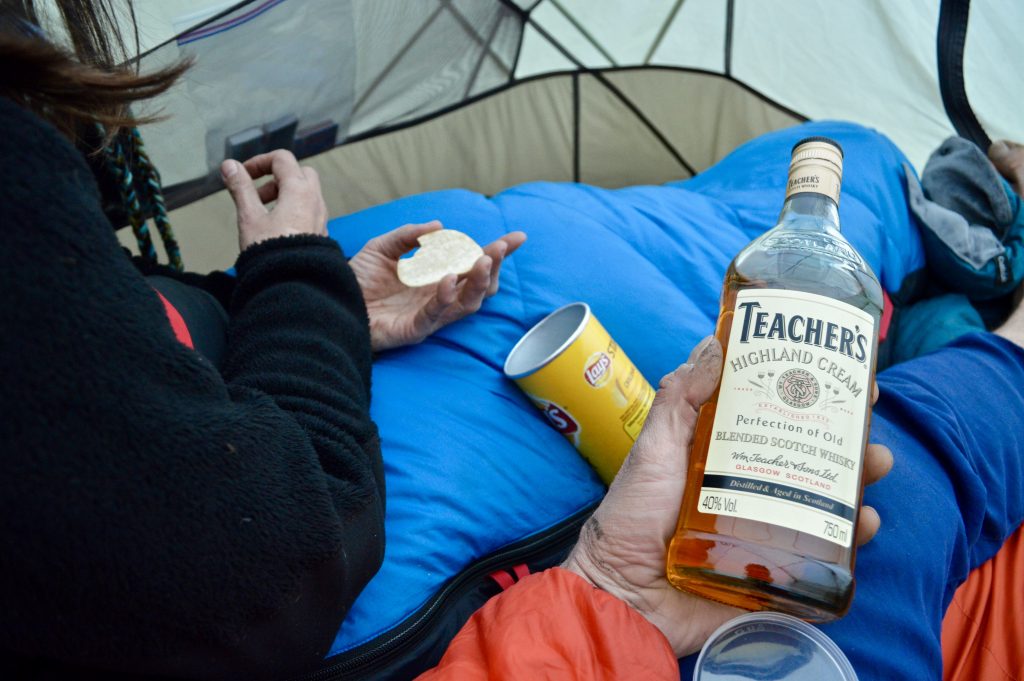 Waiting out the snowy day in the tent with a bit of Teacher’s (highland) cream as aid (Dec. 2016). 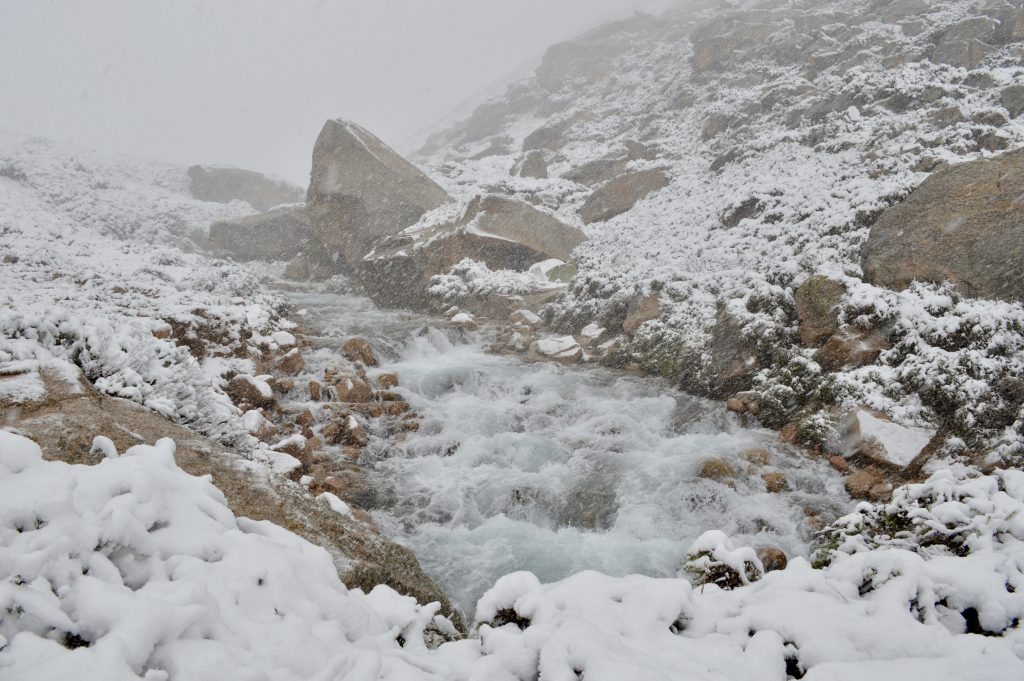 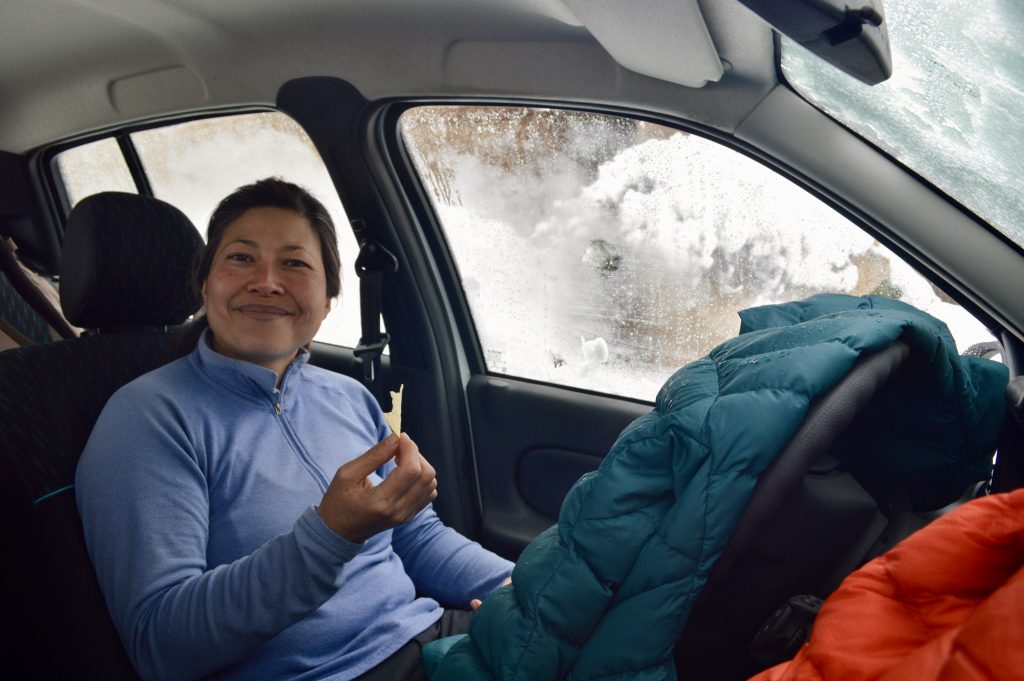 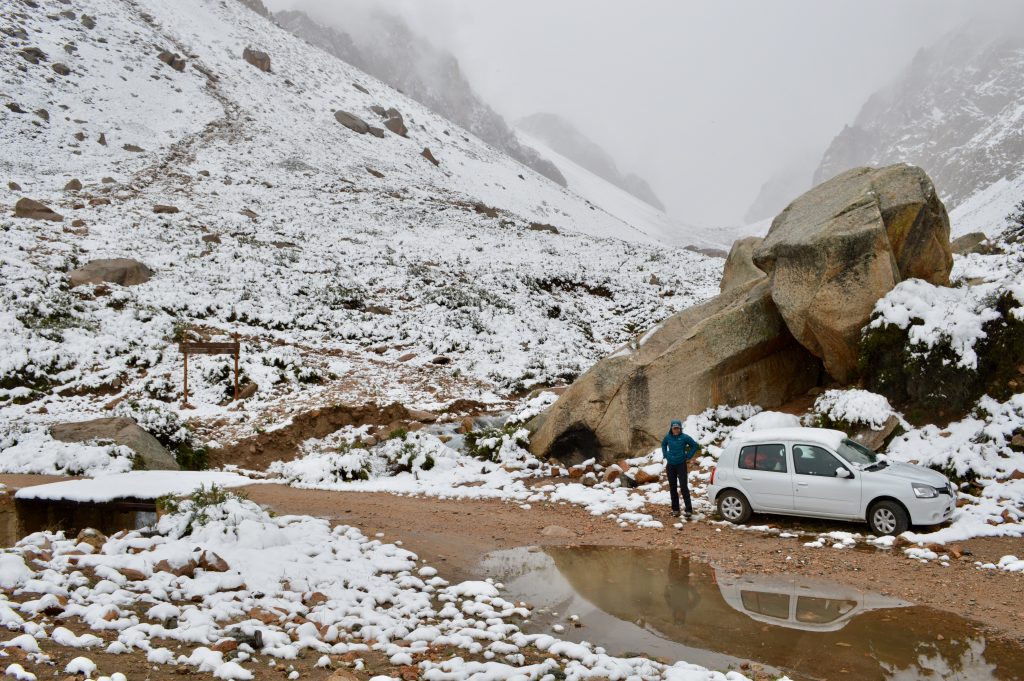 The snowfall let up for about 15 minutes and, just as we made the decision to stick it out, it resumed in earnest (Dec. 2016). 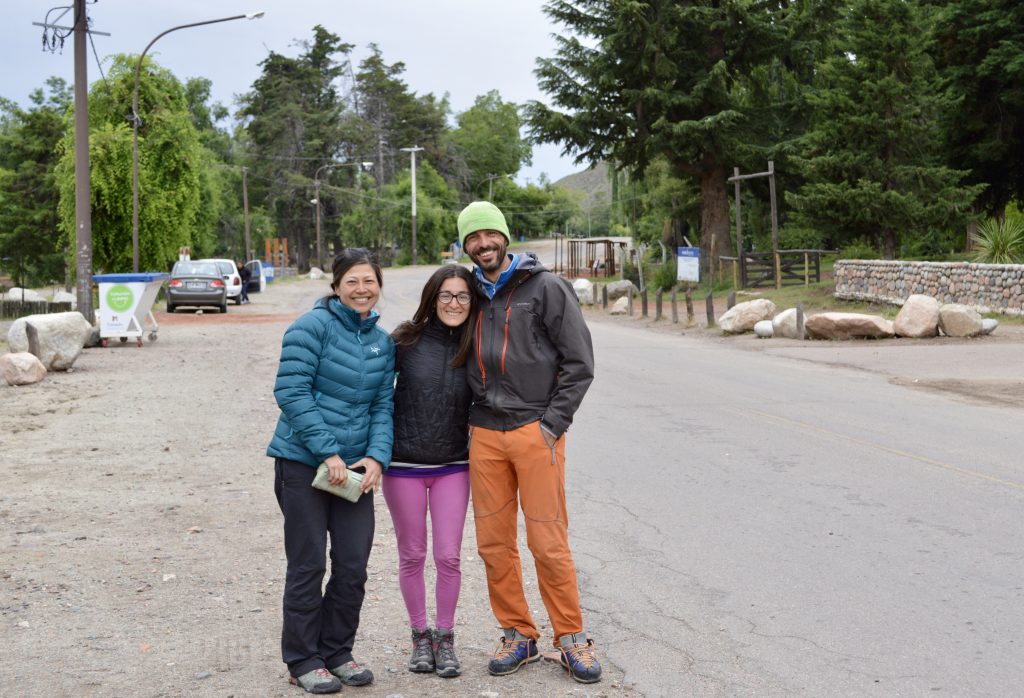 …and so we headed down along with Cedric and Veronica. This is Manzano Historico (Dec. 2016).

Go to Condor Pasa.
Go back to Los Arenales.