Go to Malaysia.
Go back to Tioman. 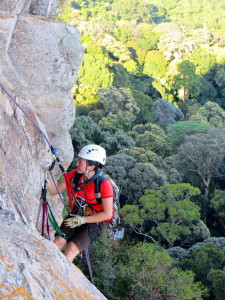 Next day, after a casual breakfast we hiked back up to the route. The first pitch is a low 5th class affair with mostly dirt, roots, and tree climbing to get above the jungle canopy. A bit of extra shenanigans are required as the haul line does not follow the meandering scramble. The start of pitch two was a head scratcher – even with the topo and the beta from David and Stephan. After a ten footer (soft landing) onto the ledge, things became more clear. Per David’s recommendation, we broke up the meandering pitch 2 into two and arrived on the sloping ledge system below The Great Roof in the afternoon. I have to say that the granite was taking some getting used to. Flaring cracks that would’ve been a mindless C1 hike on say Yosemite granite were spitting out gear in many cases. The rock texture felt almost chalky in some of those cracks – perhaps the result of thick lichen build-up? We set up our hanging camp, enjoyed some canned food for dinner and watched the small thunderheads build over the sea. Given our experience of the previous two nights we were expecting a light show out in the distance and foolishly did not bother getting the fly ready. We faded out to sleep just past 6. 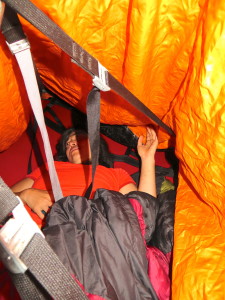 Riding out the thunderstorm on Waking Dream (video). 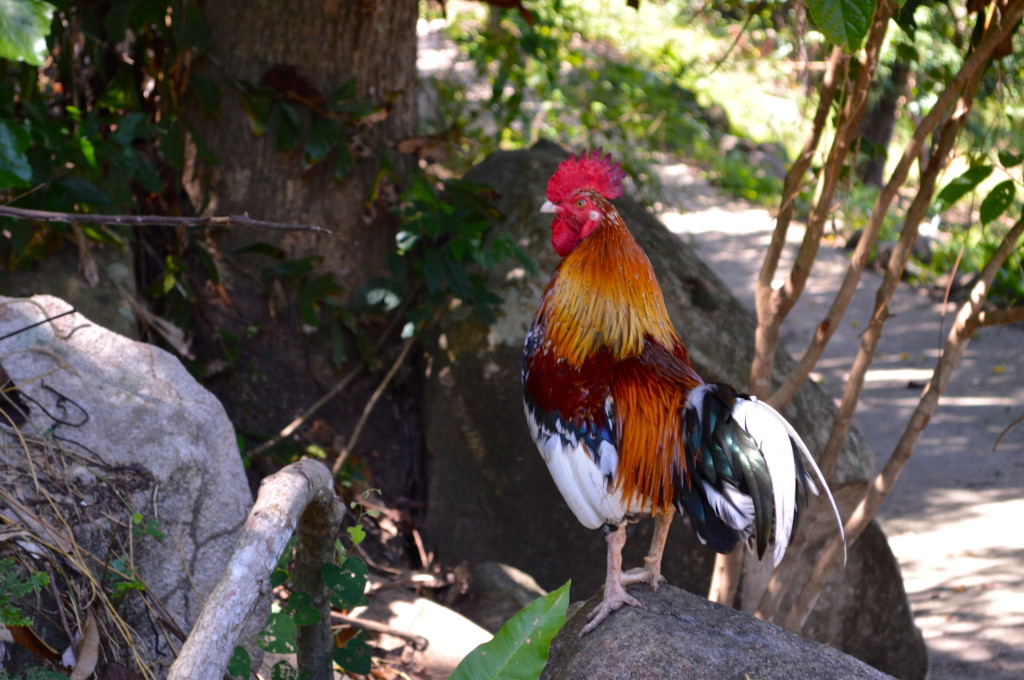 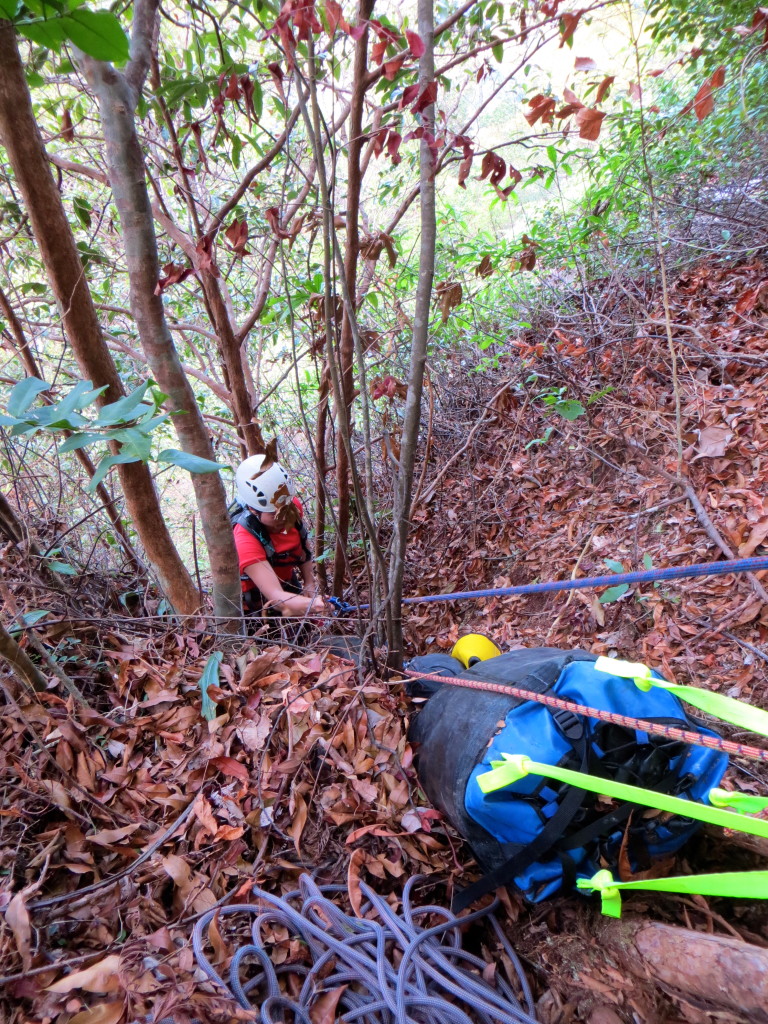 Shirley jugging the first pitch of Waking Dream – a slab and jungle affair (May 2014). 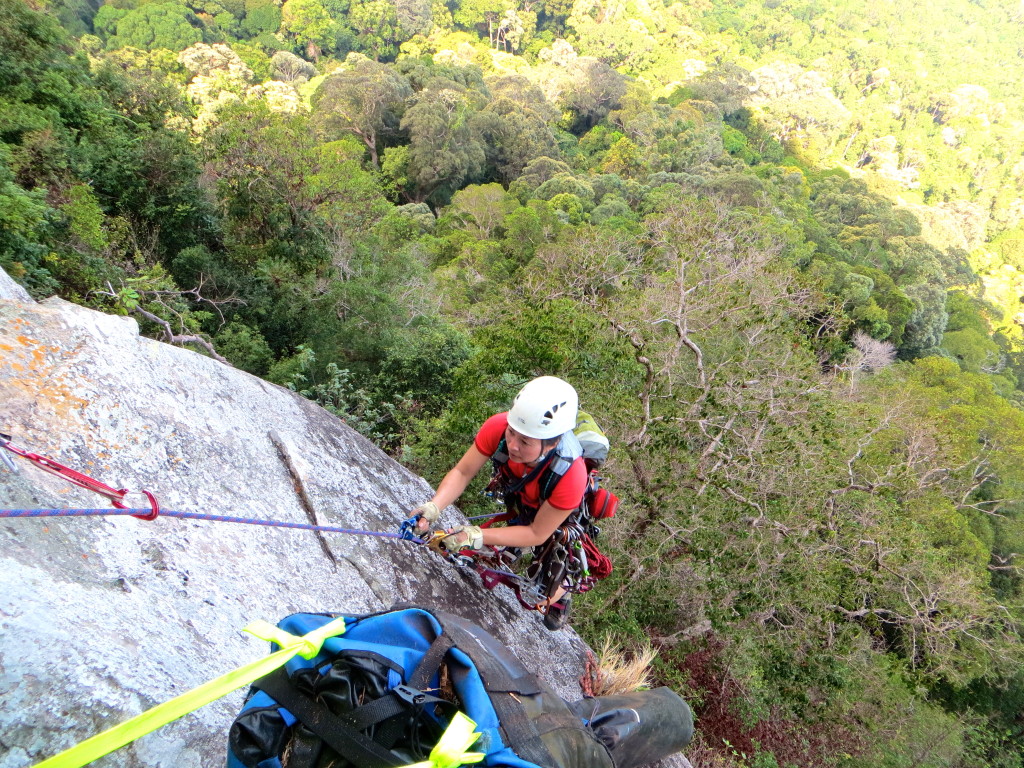 Shirley topping out on the lower half of pitch 2 of Waking Dream (May 2014). 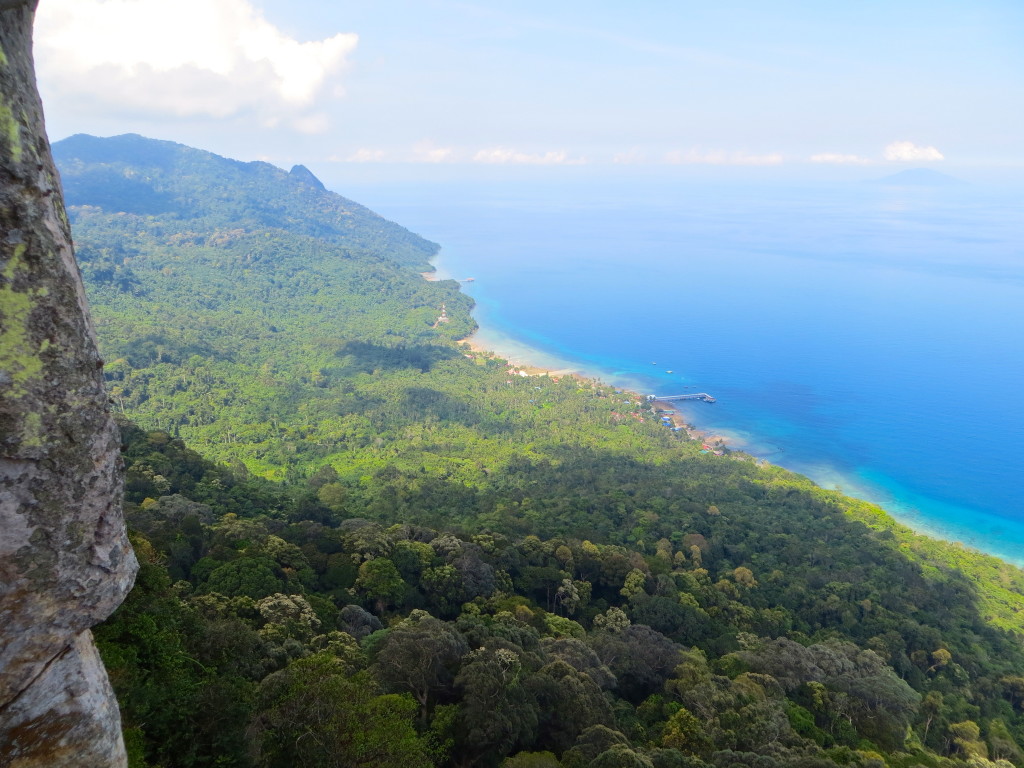 Looking back towards Mukut village from Waking Dream (May 2014). 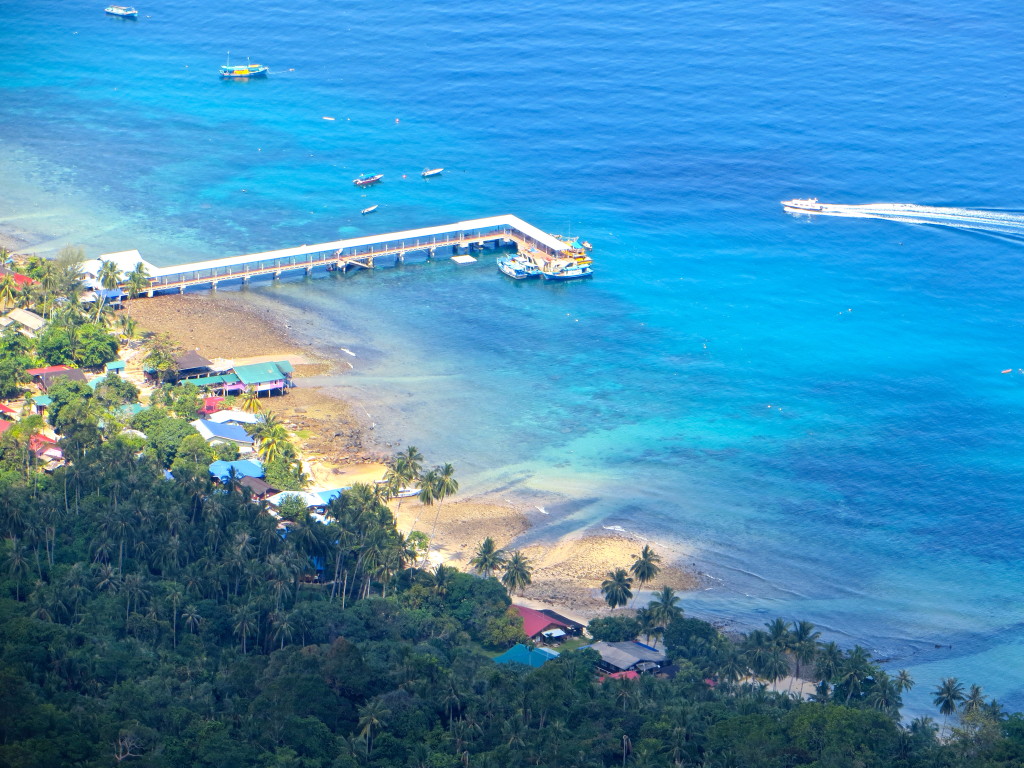 Mukut Jetty as seen from under The Great Roof (May 2014). 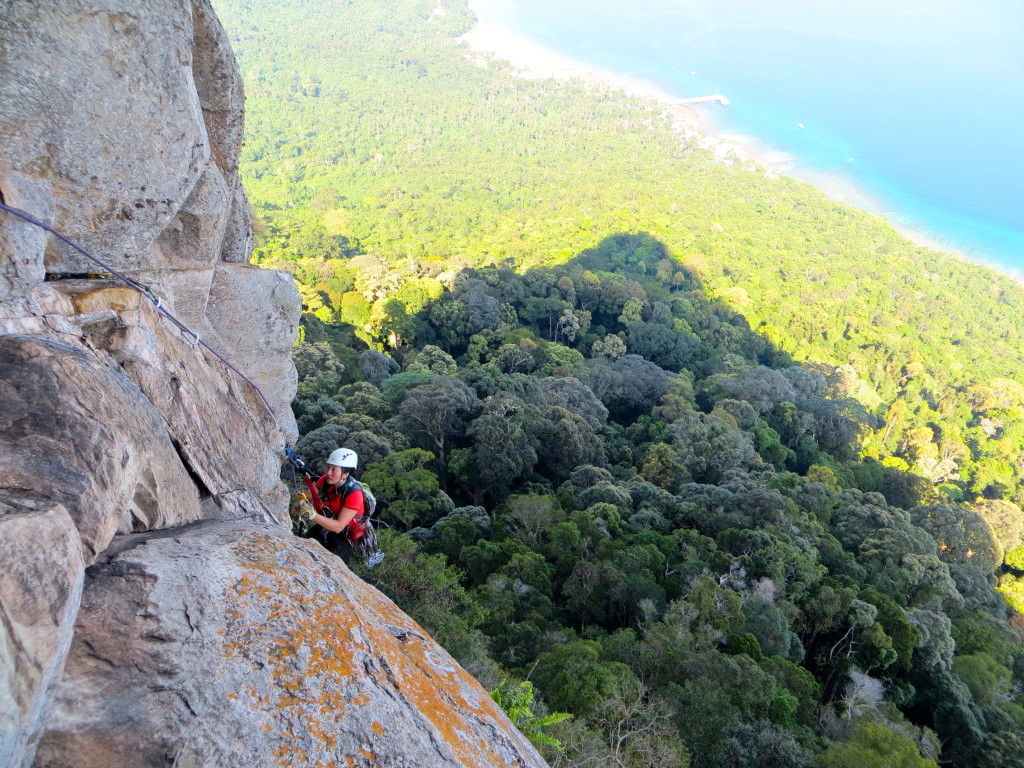 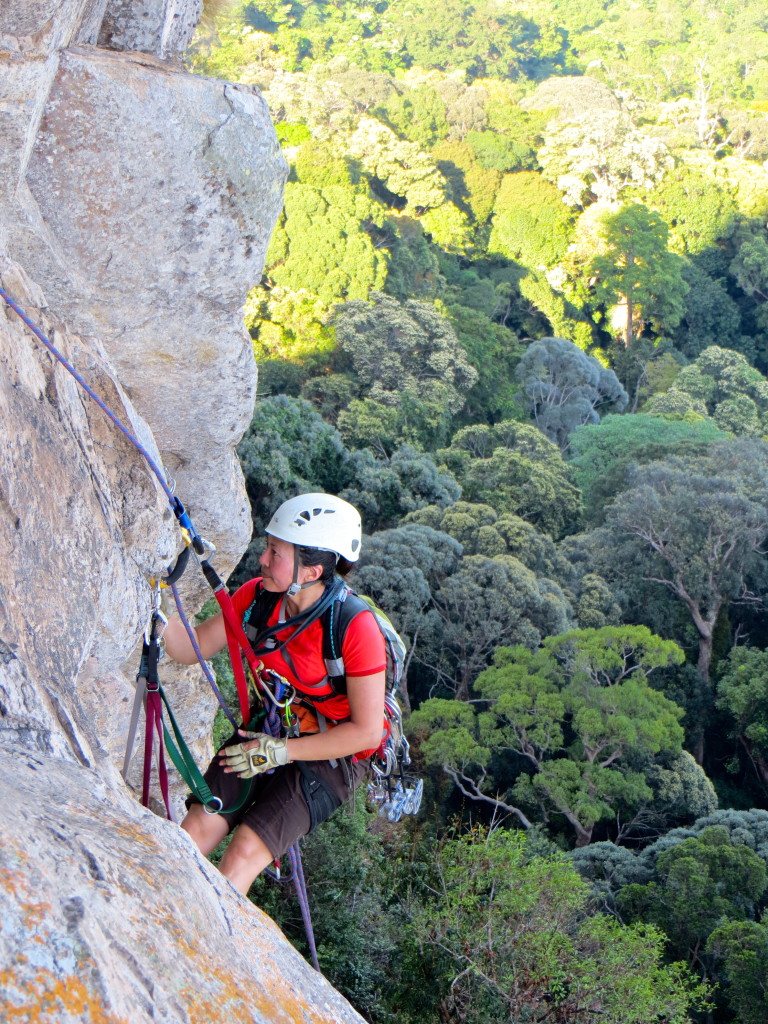 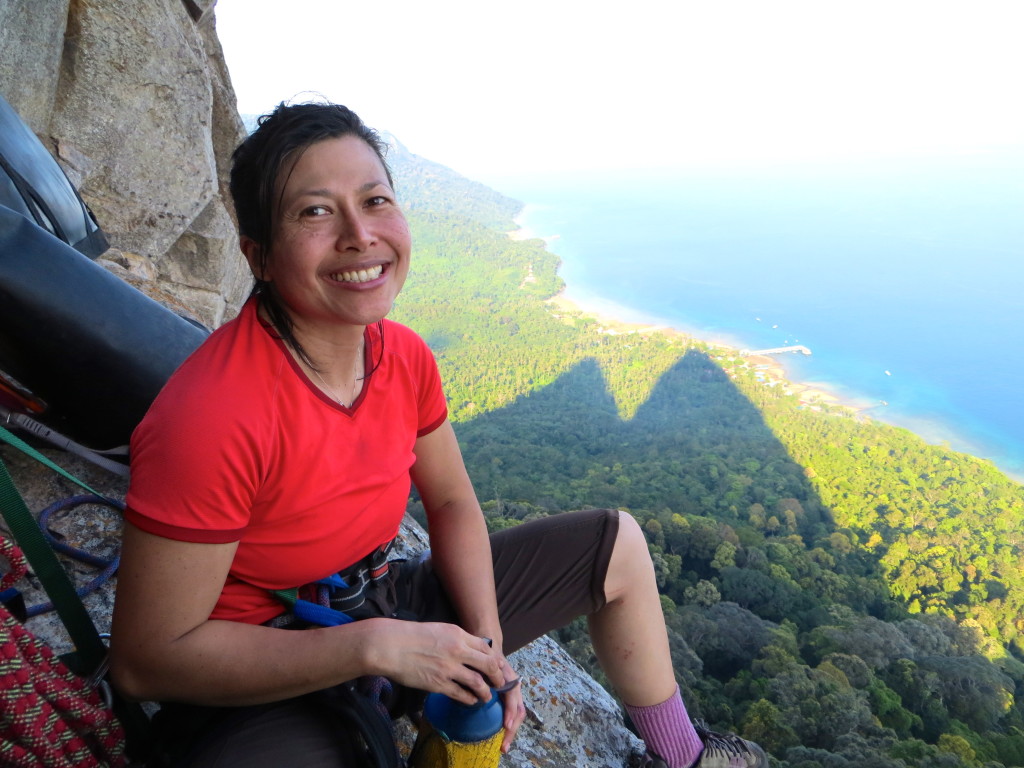 Under The Great Roof on Waking Dream with the shadows of the Horns visible below (May 2014). 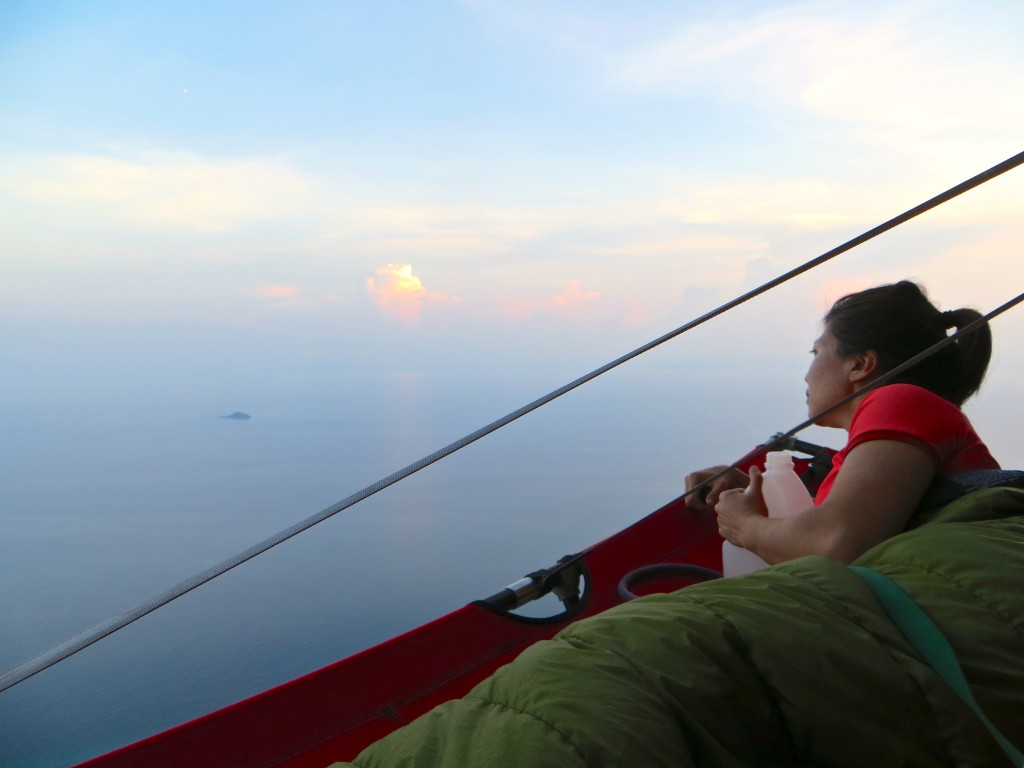 Shirley at our bivy high above South China Sea, two (our three) pitches up Waking Dream. The puffy cloud would magnify into quite a storm that would engulf us staring after midnight (May 2014). 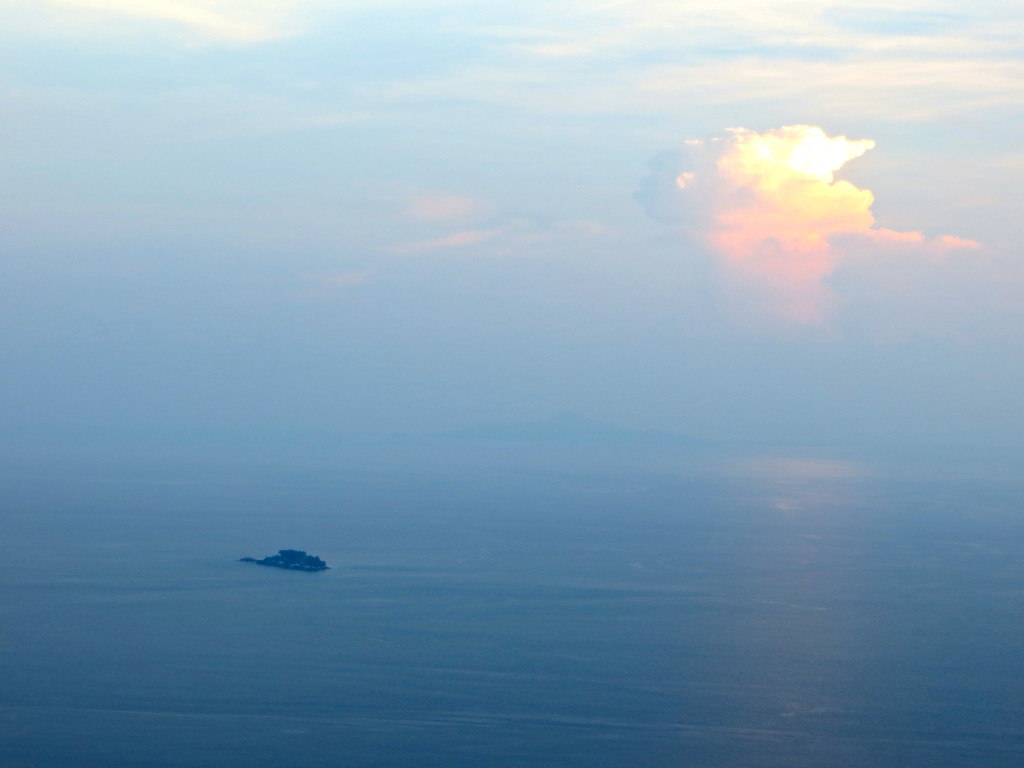 A storm building out at sea. What we did not expect is that it would NOT stay at sea… 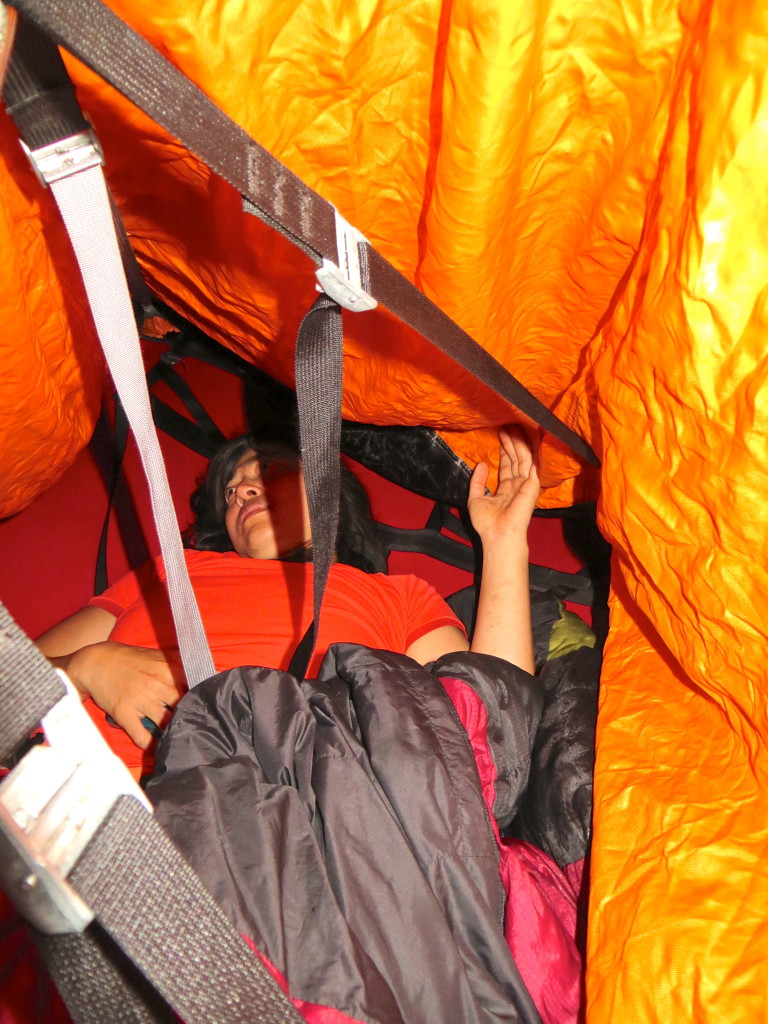 Riding out the thunderstorm on Waking Dream. Click photo for the video (May 2014). 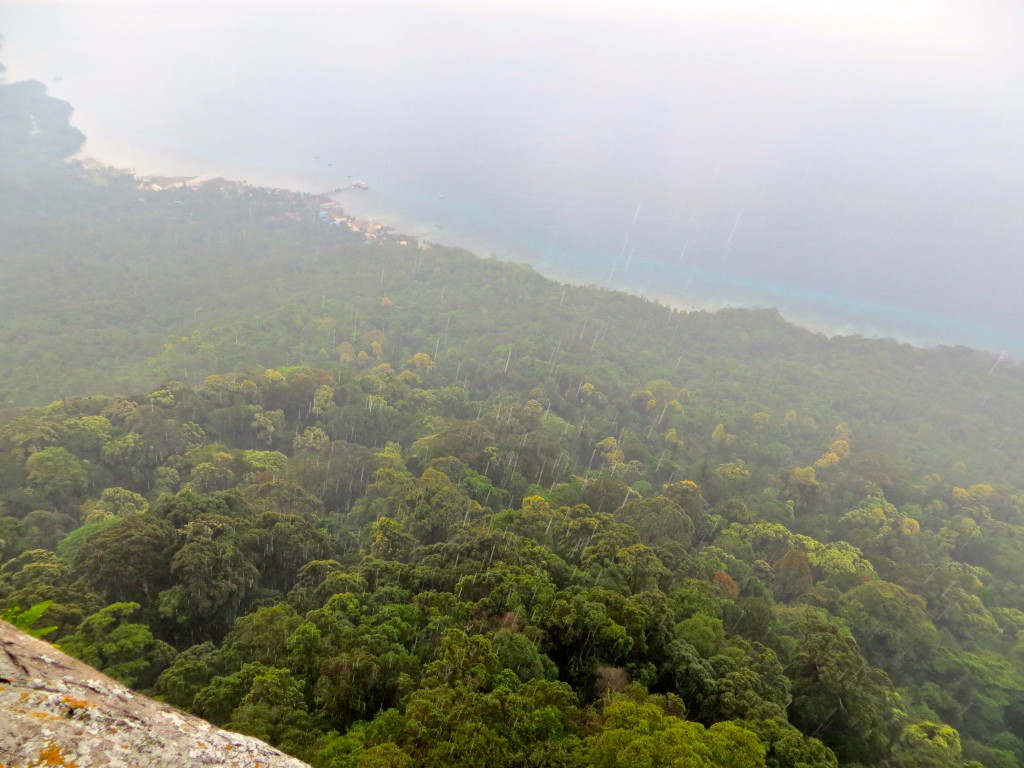 The storm dissipated before daybreak leaving behind nothing but very heavy rain. Here we are largely protected by The Great Roof (May 2014). 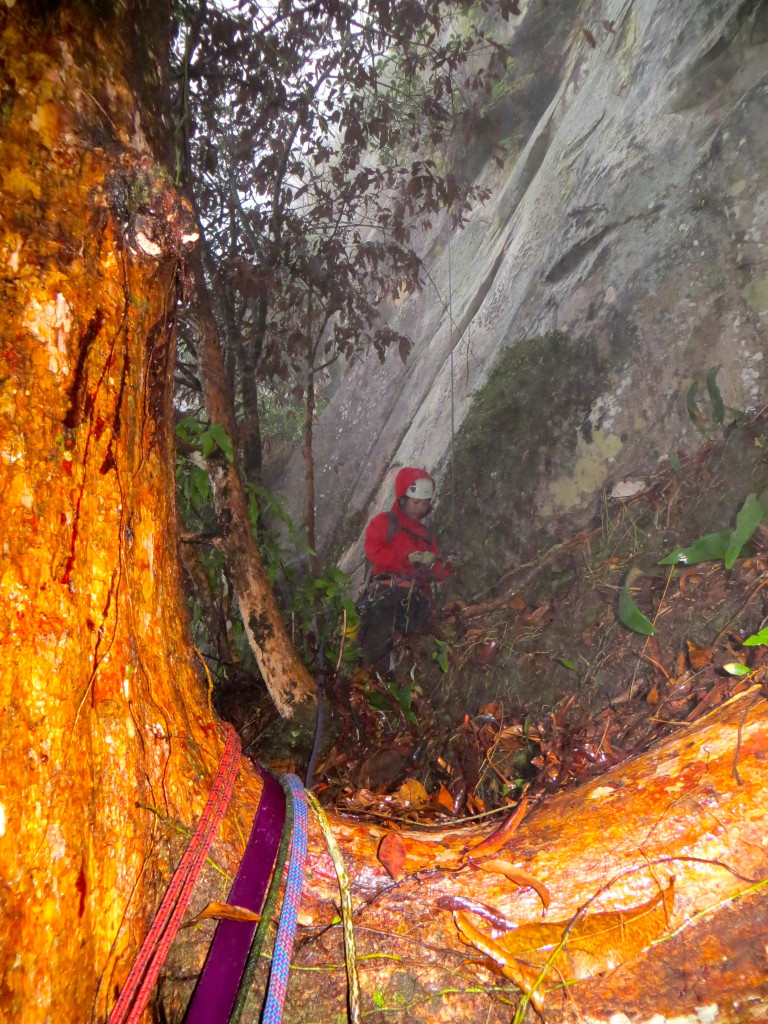 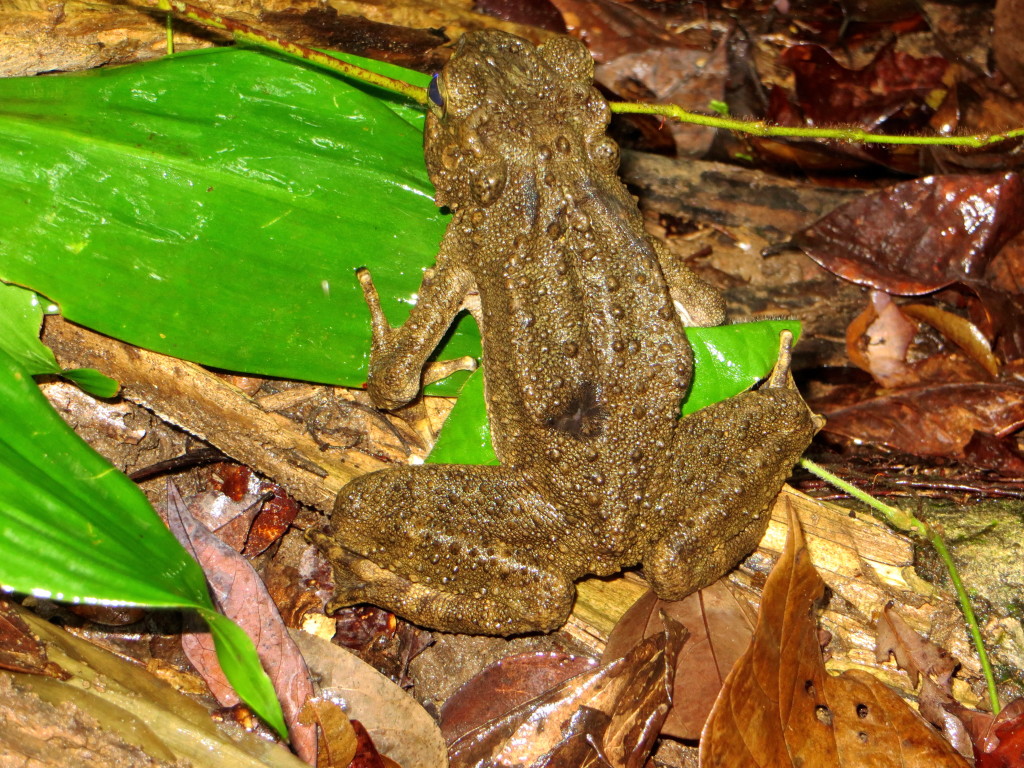 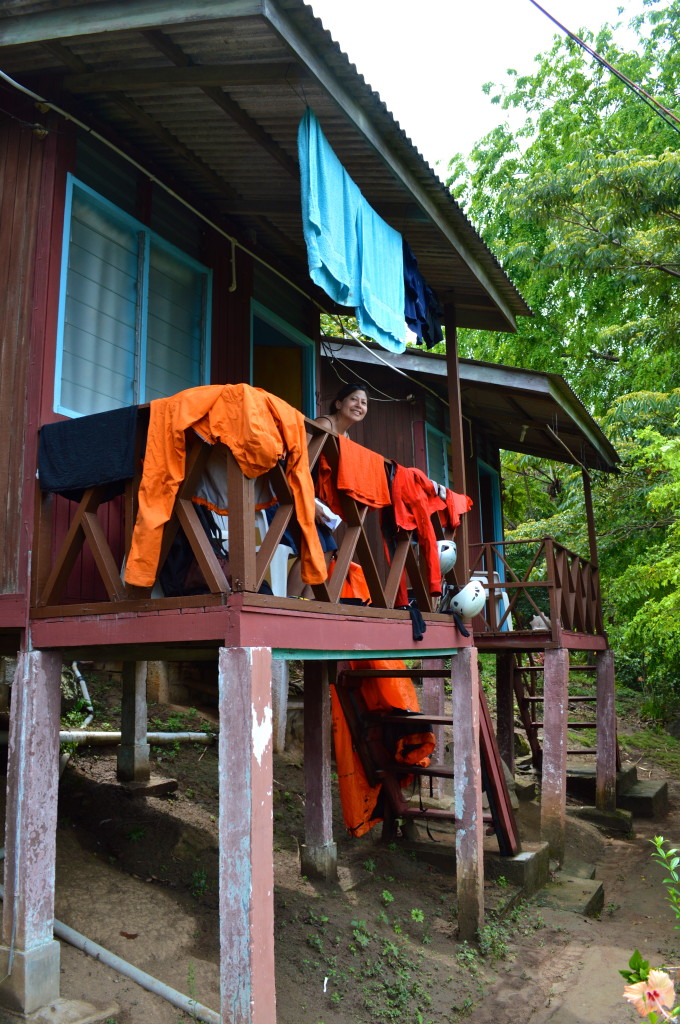 The drying operation at our chalet after a night of hosing. Hard for anything to dry in the 90% humidity and particularly on that drizzly, cloudy day (May 2014). 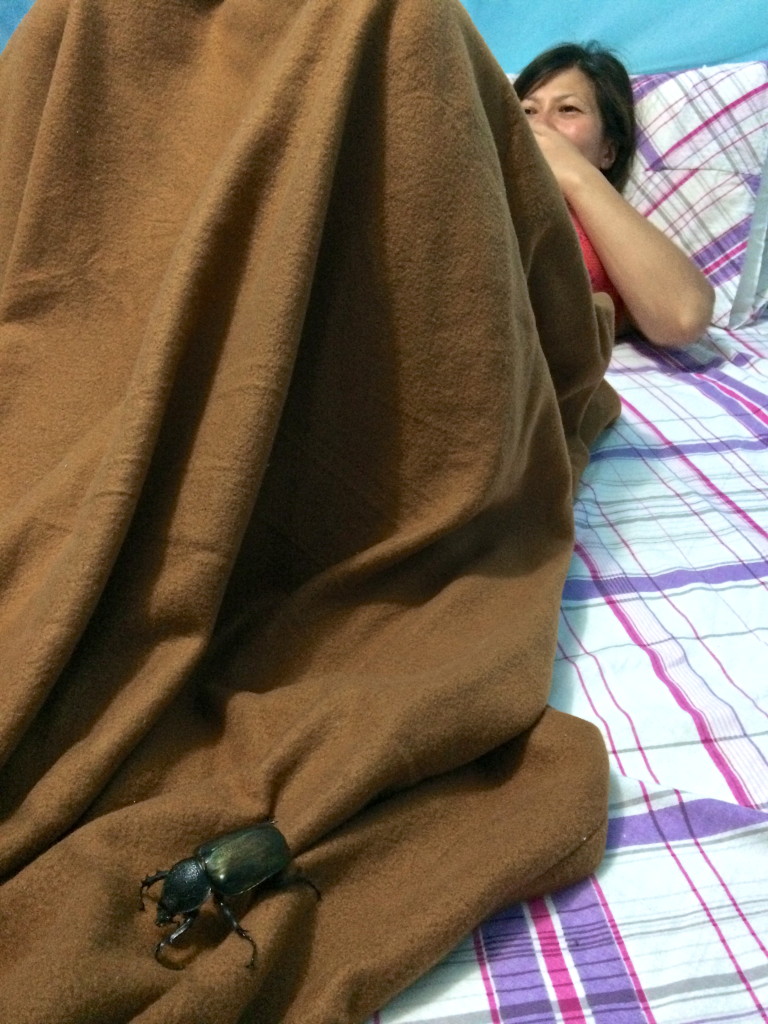 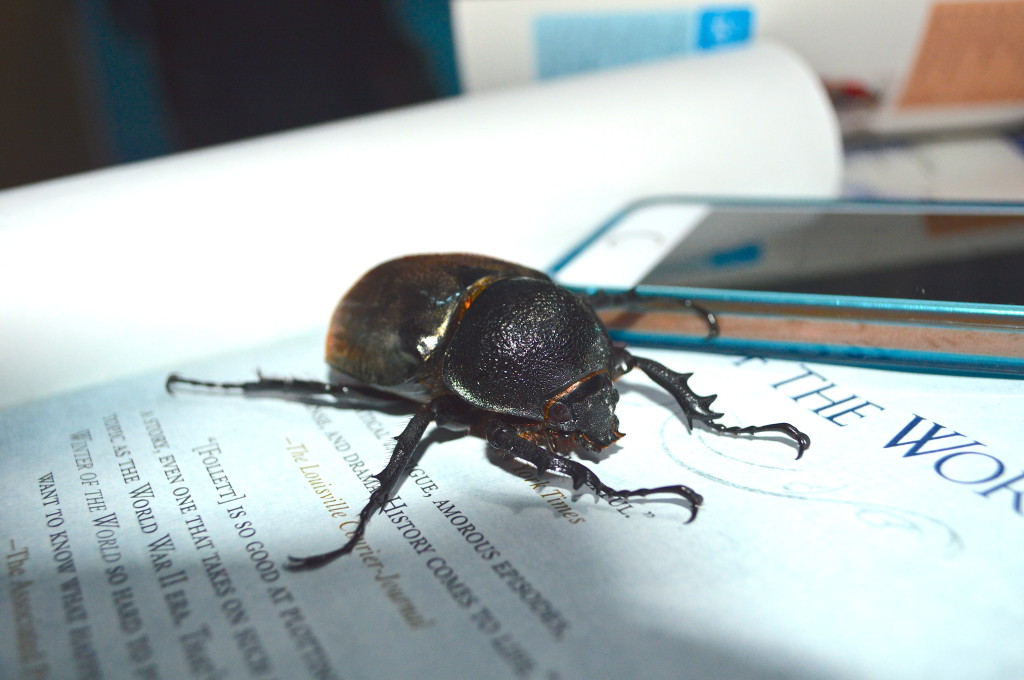 What kind of turtle is this?

Go to Mukut.
Go to Malaysia.