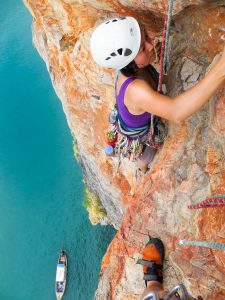 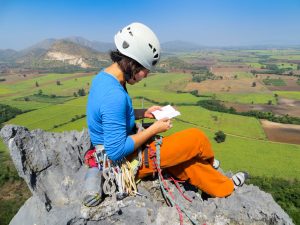 I think that the Thailand trip idea started exactly a year ago during a marathon drive down south over a 4-day New Years weekend. Three days earlier we had just come back from a quick in-and-out driving trip to Red Rocks and had naively set out to drive down to Cochise with our heads still buzzing from the previous outing. Sitting in some shitty diner in the sticks of Nevada it occurred to us that we did not feel like driving any further. In fact, we felt unmotivated and possibly borderline depressed. We (once again) swore off spending the dark winter holidays solo and on the road and started making plans for some family times over both Thanksgiving & Giftmas in 2012. The challenge was to mix family & climbing times – to have the fucking cake and eat it too. 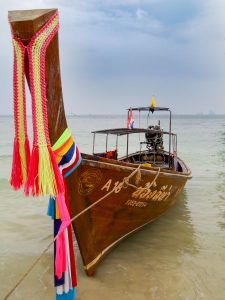 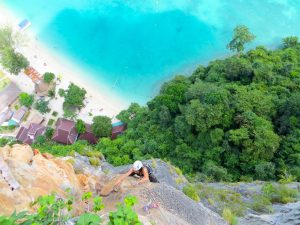 Thailand quickly emerged as a great middle ground where we could meet up with Shirley’s Mom. She would not have to travel halfway around the world and we would not have to sit around locked up in a house in a huge city. Win – win! Maybe…

We knew that we’d be in Thailand during the high tourist season but that was the trade off for getting a two week stretch at the cost of our remaining 6 vacation days. Also, what’s not to like about the prospect of joining the herd of rude, chain-smoking, banana hammock-sporting tourons on the beaches of Krabi Province … 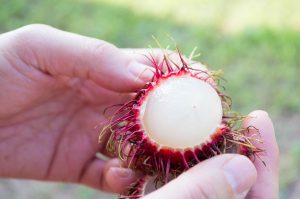 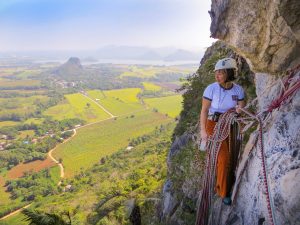 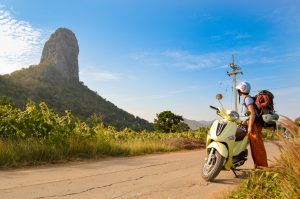 Thailand is as easy to get into and around as western Europe. With sufficiently early planning, the cost of flights (form the west coast of US) is also comparable even during the high season. US passport gets you a “visa” on arrival…technically it’s not a visa but some sort of an entry permit good for <30 days (a nontrivial difference when you see the two lines at BKK). During our visit, the exchange rate was approximately 30 Baht/$1. Once in the country, getting around is straightforward. We took a cab from Bangkok to Lopburi (175km for 2000 Baht) and a public minivan on the way back (tenth the cost). Would do the latter in the future as it’s cheap, easy and efficient. Bangkok taxi drivers have a decent reputation for not screwing you (too hard). In Lopburi, we stayed in Noom’s Guesthouse (1 block away from the minivan station & all the old town attractions) and would do that again. Noom’s has a range of things to rent from rooms to bungalows. Most importantly, Noom the owner makes a great cup of coffee in the morning and is a cool guy (and a climber). He has climbing beta and some gear available for rent. Also, he’ll rent you a scooter for 300 Baht/day (international driving permit was suggested but never checked for…probably would be if one were to get pulled over by police). This is essential for getting to and from the Khao Chin Lae 2 Peak (20km away). 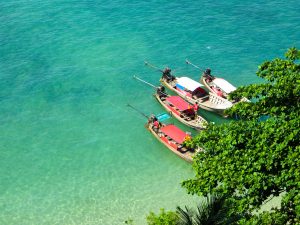 Take advantage of the fresh fruit vendors in and around town as we hardly found any later on in Railay. Don’t be afraid to try new things pussycat – there’s a reason why people like some of “those weird looking things” (because they’re tasty, silly).

Climbing on Kaho Chin Lae 2 would best be described as “adventure sport climbing”, particularly the multi-pitch lines. There’s a Buddhist temple at the base of the peak where the short hike to the base begins. We found the gate locked but politely talked to the lady in the yard and were let in with a smile. Be polite, respectful, and generally as far from an asshole as you can. As with most places, climbing here is a privilege and not a right. Make a donation into the blue box next to the trail and you’ll send harder.

Beautifully drawn topos used to be available for free at bamboo-escalade.com but the site has been down for a few months now. Noom has a hardcopy of the guide. A total of four 6-pitch lines (one of those is trad) exist on the main peak (from 5+ to 6b+) and one line on an adjacent tower (3-pitch). A ton of single pitch sport lines (up to 7a) are scattered along the base. 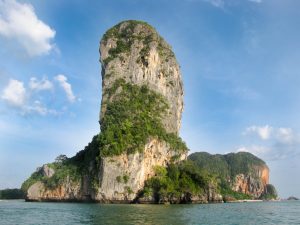 We climbed a 6-pitch line called Corcovado (6b) and found it clean, well-bolted and softly rated. We set out to climb the 6-pitch Nok Kaho Mai Chai Nok Rao (6b+) line but found very active bees nests on the first 2 pitches and bailed.

Getting from Bangkok to Railay will require flying into Krabi airport by those on any reasonable time budget (~800 km distance overland). Many local airlines can take you there pretty cheaply (we used Air Asia which operates from Don Mueang Airport in Bangkok …the two airports are separated by a 500 Baht cab ride).

From Krabi airport it’s a 30-45 minute cab ride (500 Baht) to one of the marinas, either Ao Nang (good for late evening boats) or the closer Ao Nam Pier during daylight hours. Railay lies on a peninsula which is cut off from the mainland by cliffs making it reachable by long-tail boat only. If you find others to share a boat ride great. Otherwise, it’s 1200 Baht from Ao Nang to Railay West.

Railay East and West generally provide more high end accommodations. Tonsai (separated from Railay by a 30 minute jungle path hike) has some lower key options including bungalows & camping (have fun with that latter one…). 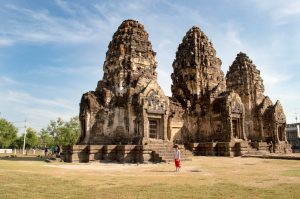 Many guidebooks are available. Sam Lightner Jr.’s (American) guidebook is a good read but seems a bit dated now and does not include all the new routes. We also used the King Climbers’ (local) guidebook which I would recommend. 800 Baht to buy locally with the proceeds going to rebolting the lines….ongoing effort to upgrade bolts to titanium glue-ins which are apparently the only durable option in the highly corrosive marine environment. Plenty of climbing shops in the area to meet any (sport) climbing needs. Well, not sure if they’ll carry large rock shoe sizes…

Hiring a long-tail boat for a half day (Ao Nang Tower climbing for example) was 1700 Baht; full day was 2200 Baht. Make sure the seas are calm enough or you’ll be out some cash for the ride out & back to the climb…

We did four routes there and found them well-bolted, clean, and very polished in some cases (Humanality). We bailed on one more because it was a bit wet, mossy and loose (I can go to the Columbia Gorge for that kind of shit). The ratings seemed soft on three (vs. Europe ) and pretty in-line with Euro ratings on Orange Chandeliers.

Know how to descend multi-pitch, overhanging terrain…seems like an obvious thing but based on the near epics we witnessed perhaps it’s not.

Go to Lopburi Part 1.
Go back to Climbing.