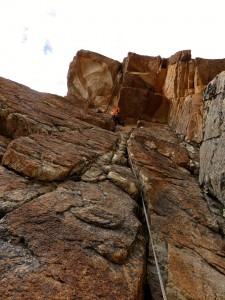 The next morning we woke up to a light dusting of snow. The upside of Frey is that most climbs are not long (nor are many approaches) and so you have time to massage your motivation into shape over 3 or 4 cups of coffee in the common kitchen. Eventually we rolled out into cold and worsening wind and hiked up to Aguja La Vieja. I don’t know if I can blame the marginal weather …more likely it was just lack of balls. But after the first pitch of Sudafricana route, pitch two was kind of hard and when things got wide (was wishing for a #6 but had nothing larger than a #4) I lowered off some fixed tat and we rapped off. The section is rated “5+” in the book – perhaps it’s a case similar to an old school “5.9+” back home… 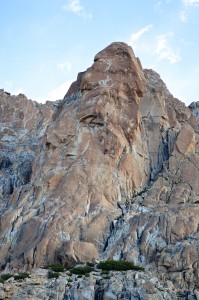 We got our first taste of a windy night in Frey. Holy shit, thought the 3-season tent (along with us inside) was going to end up in the lake. The wind did not let up in the morning and so we were resigned to not climbing. Joe and Barry – two climbers from the Carolinas that we had met in Frey arrived that day – and so at least we had company to bullshit with. Sometime in the early afternoon, we were heading back to the Refugio for some wine when the wind died down. We grabbed gear and ran up to Aguja Frey and climbed the Sifuentes-Weber route (5+) opting for the Monti finish on the last pitch (well, 2 pitches). The relatively low wind conditions lasted only for the first two pitches of course but the climbing was mostly straightforward and the finishing pitch really, really good (steep jug pulling in an exposed position right over the Refugio). This time we did one rap and some scrambling on the backside of the formation. We were getting pretty good at rapping in high winds with ropes neatly stacked on the shoulders. 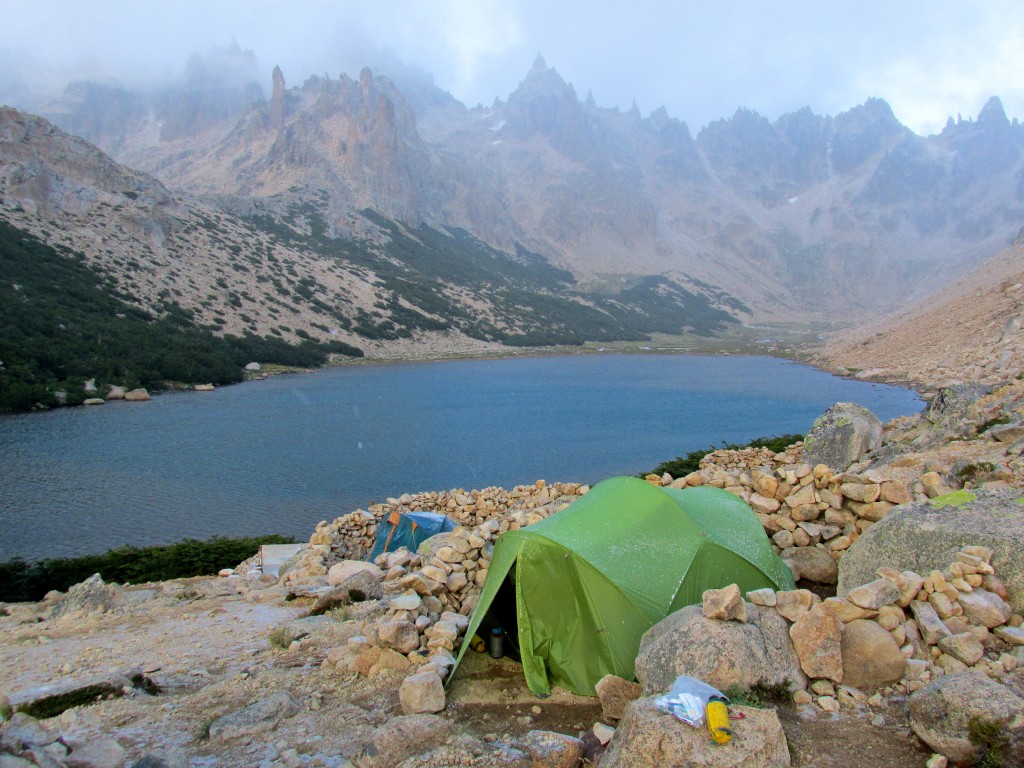 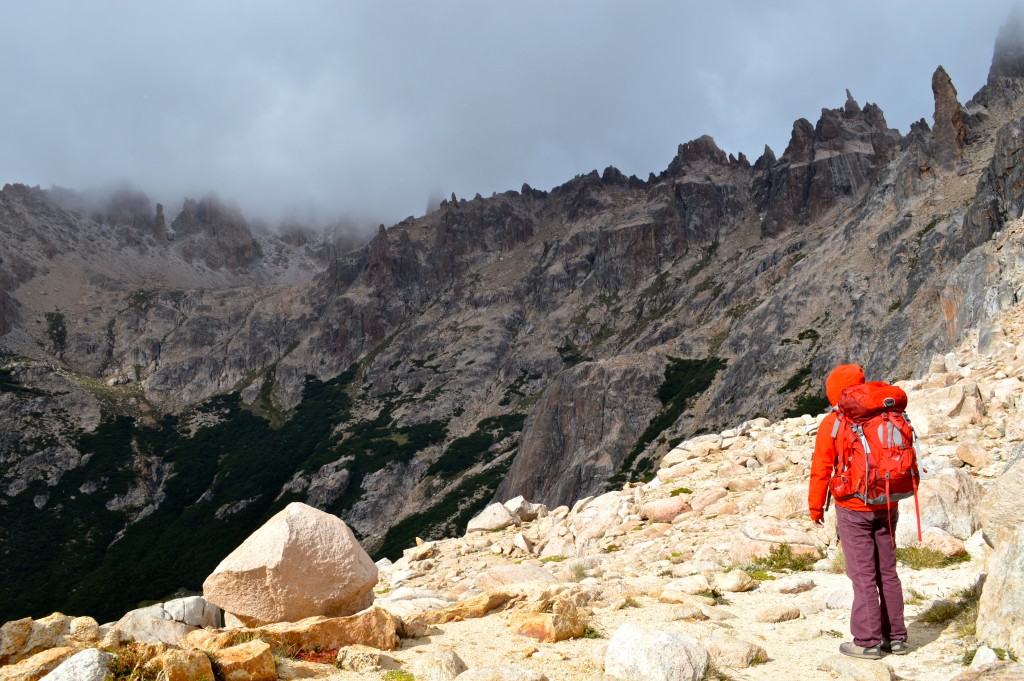 Hiking up to Aguja La Vieja (small spire in upper right corner of photo) on a marginal weather morning (Feb. 2015). 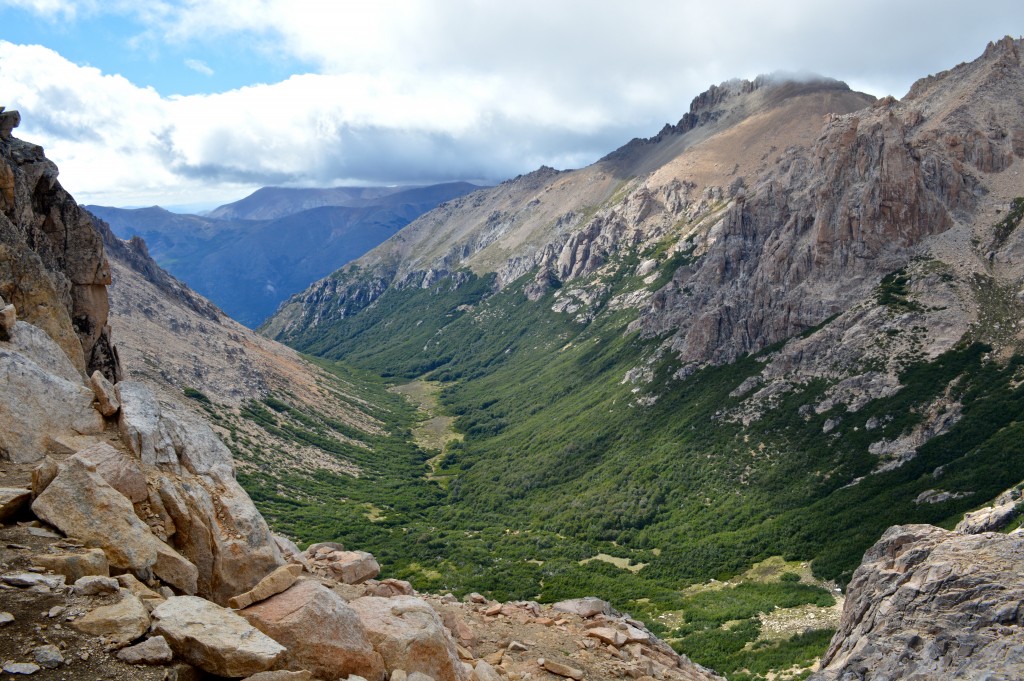 The “Campanile Valley”…not sure if that’s the name but it’s the adjacent one to the approach valley to Frey (Feb. 2015). 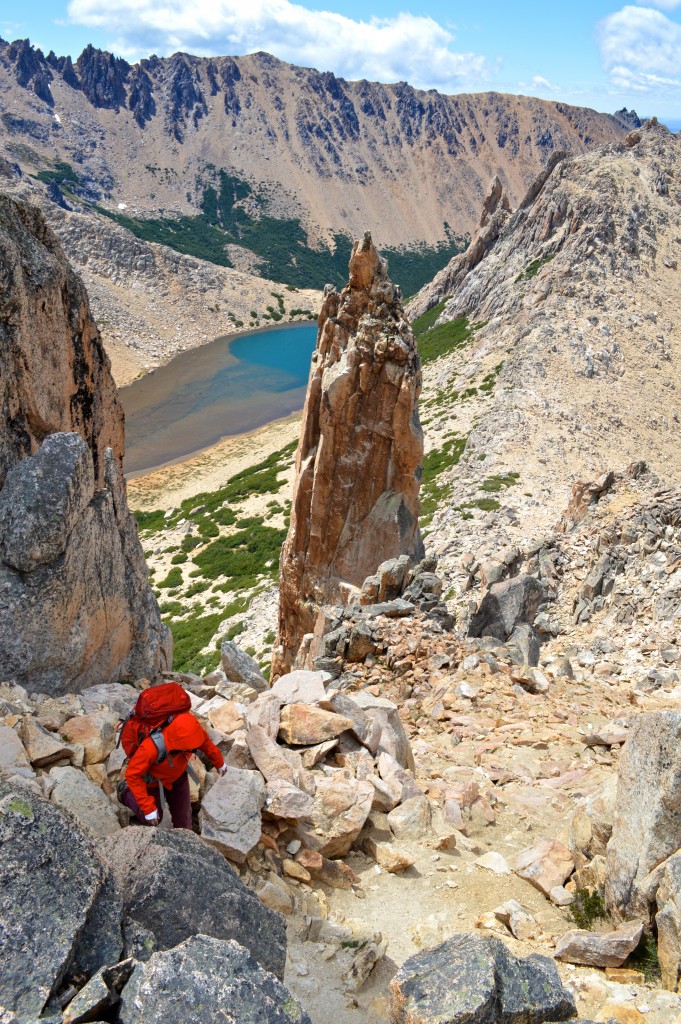 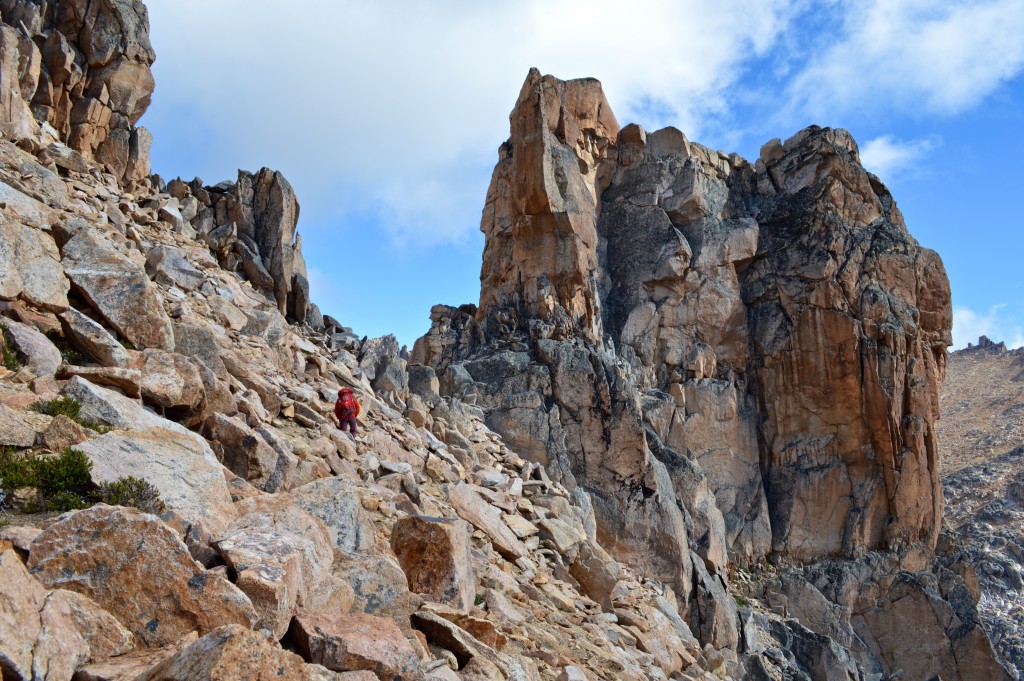 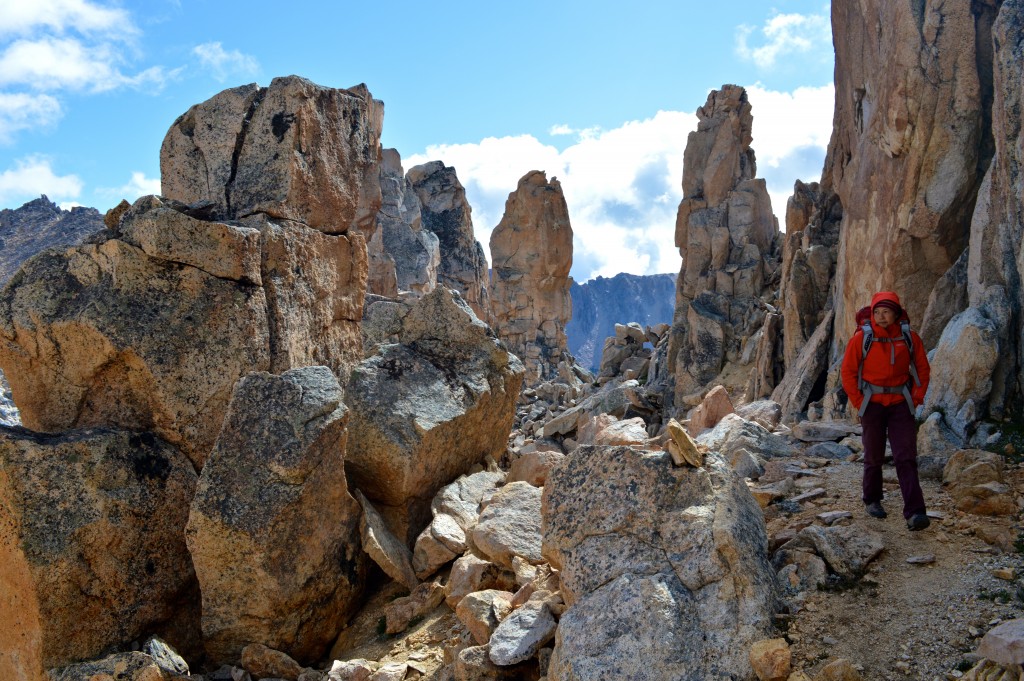 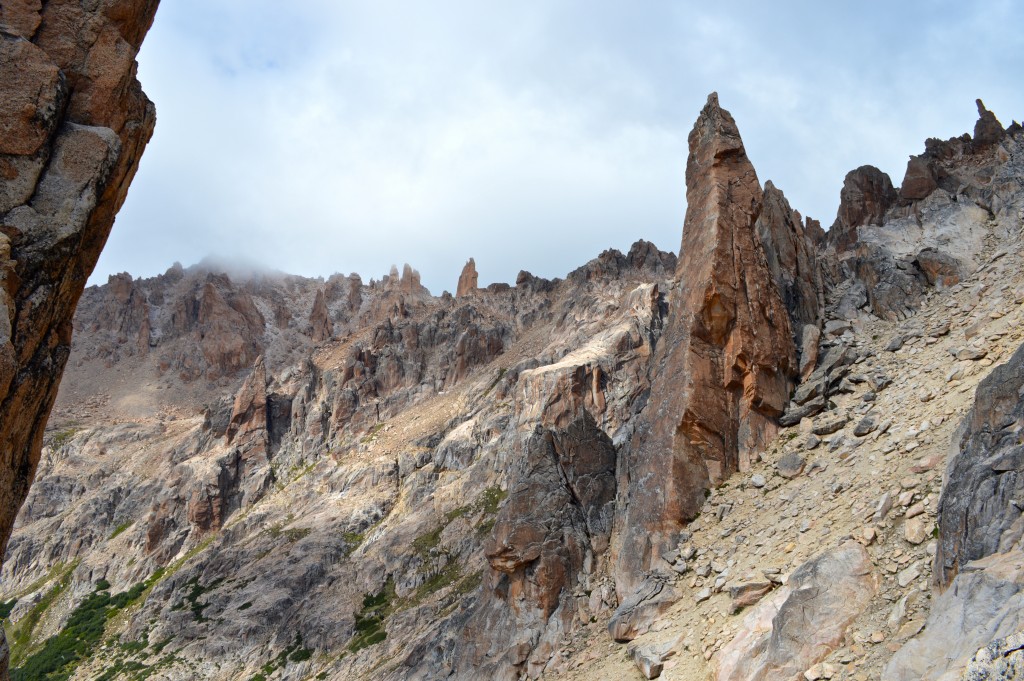 Aguja La Vieja. Sudafricana route climbs up the obvious dihedrals and then continues up the crack system above and right (Feb. 2015). 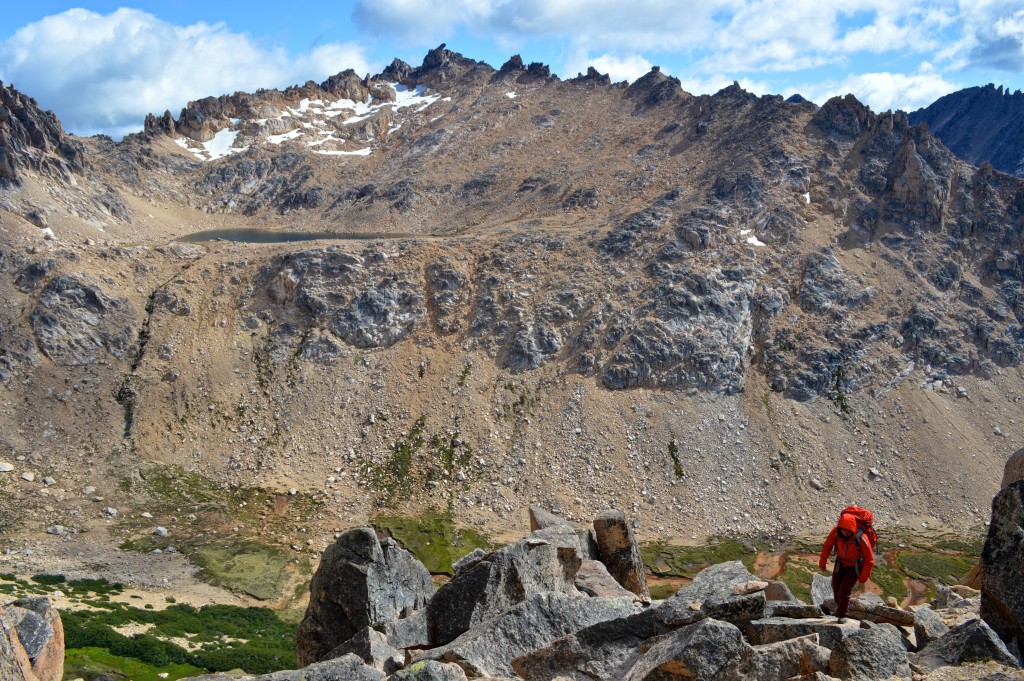 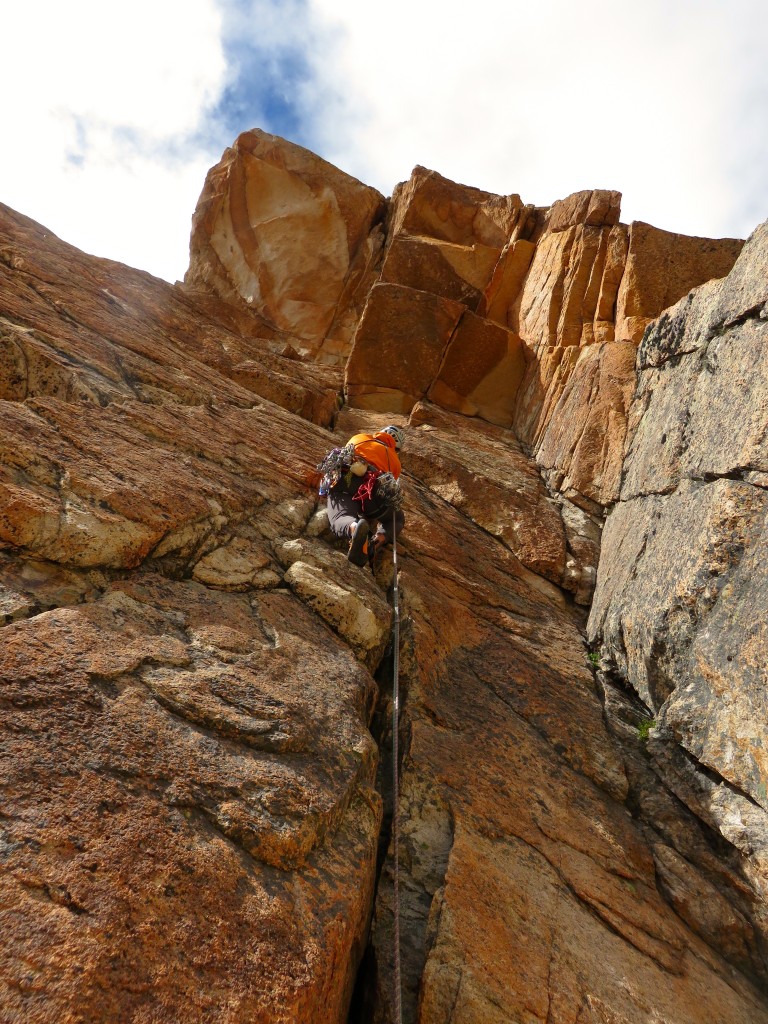 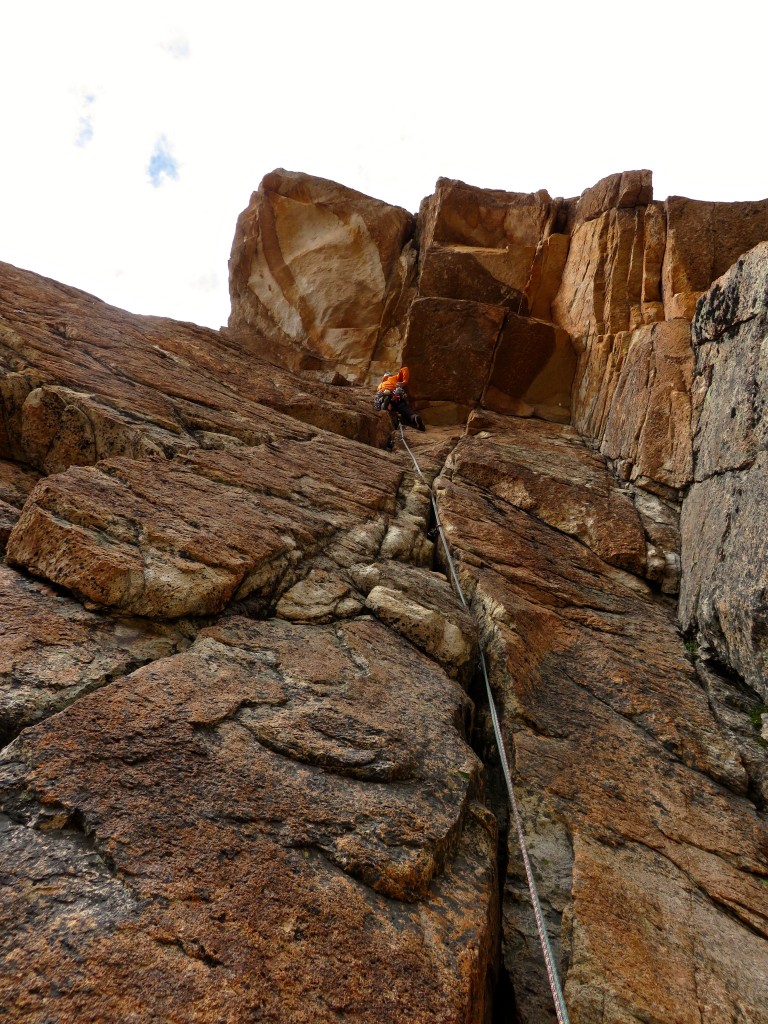 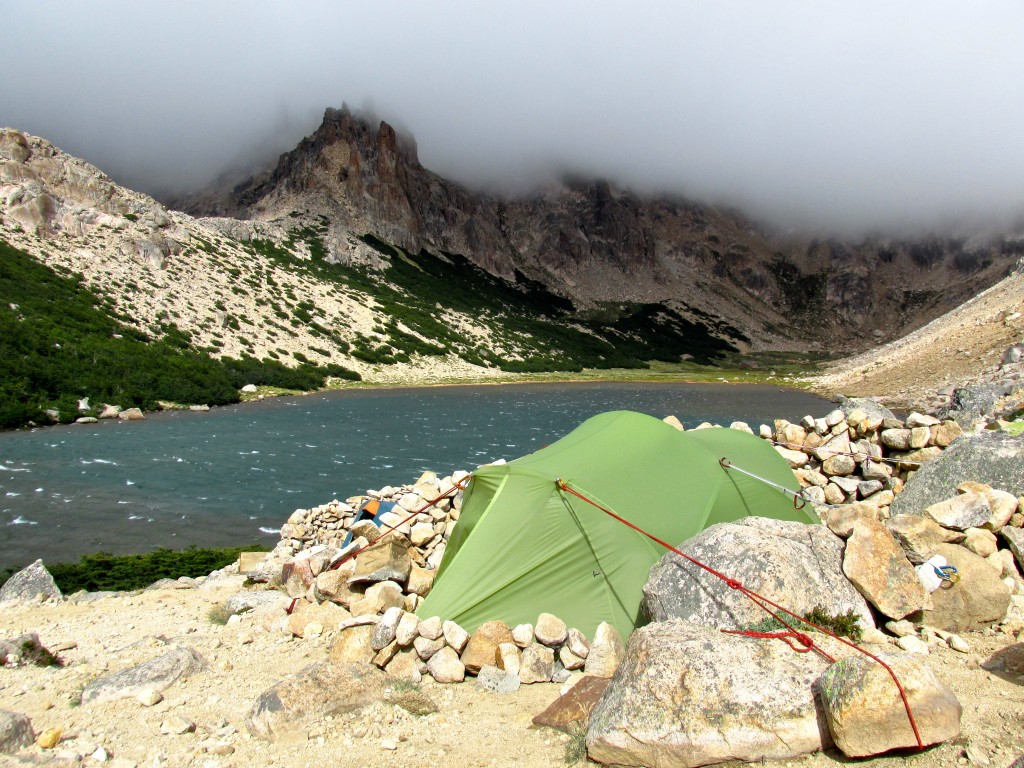 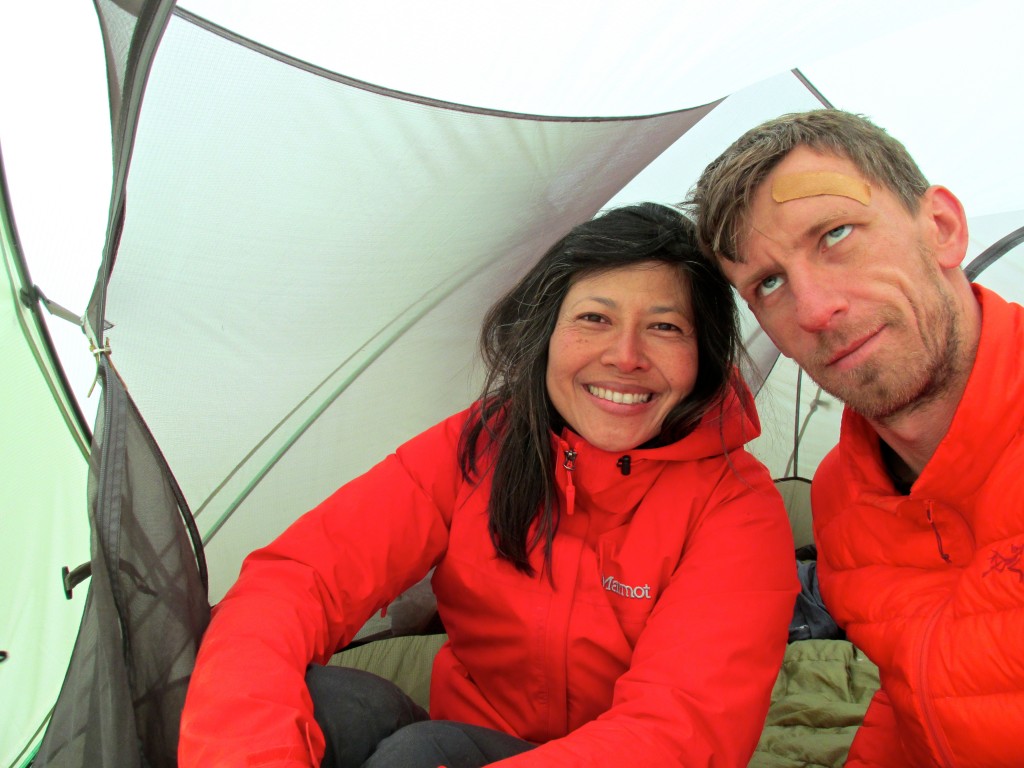 Shirley is still plenty happy about sitting out another half day of wind in the tent…I, less so. Click for a video (Feb. 2015). 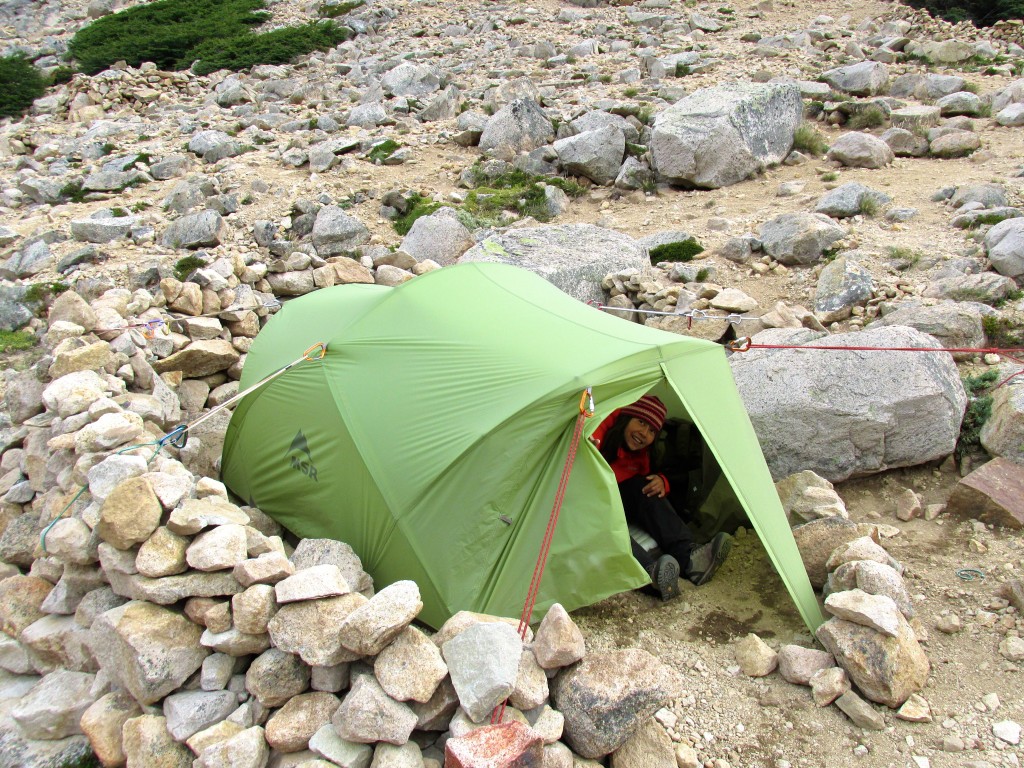 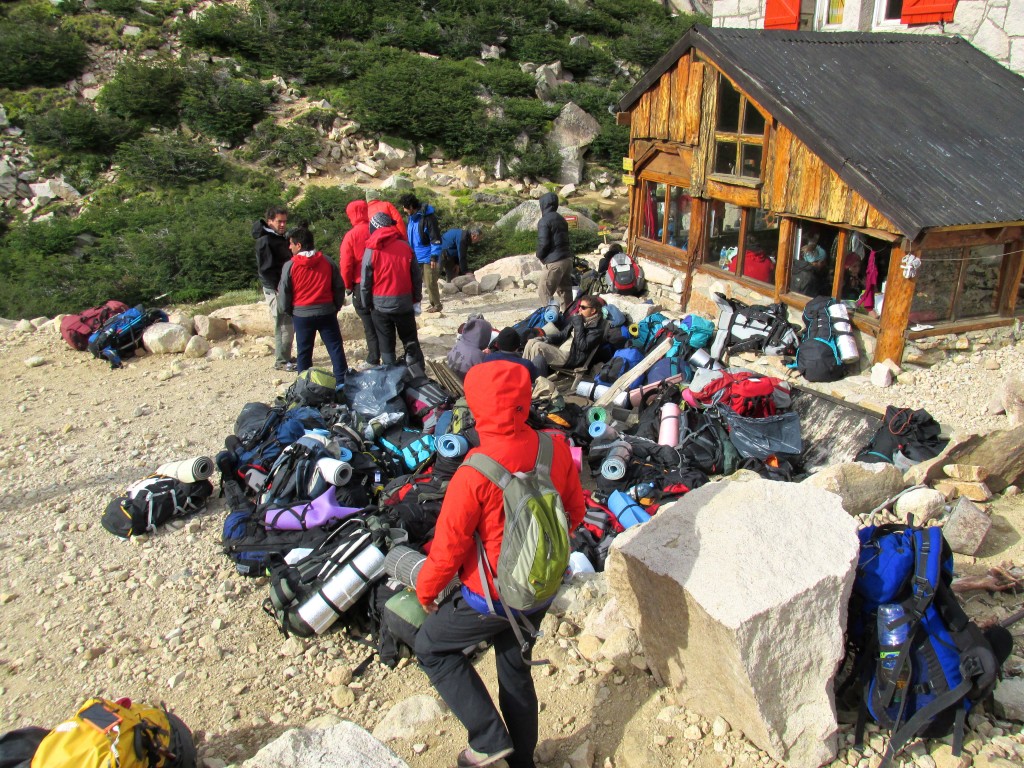 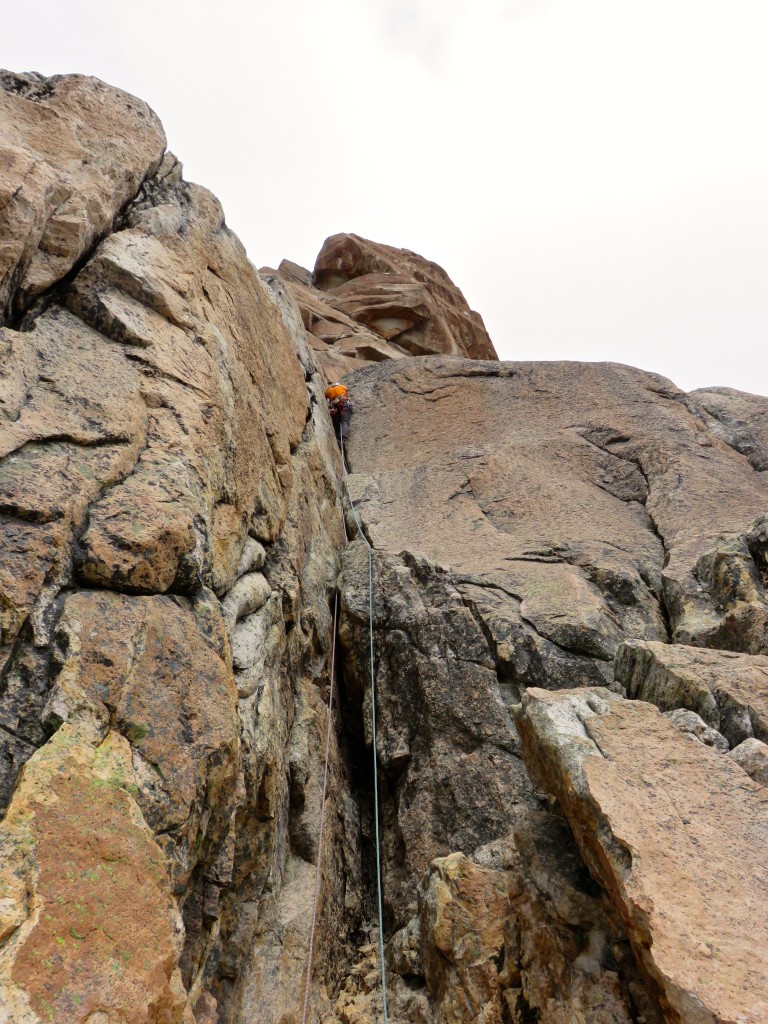 Starting up pitch 1 of Sifuentes-Weber on the north face of Aguja Frey in the afternoon (Feb. 2015). 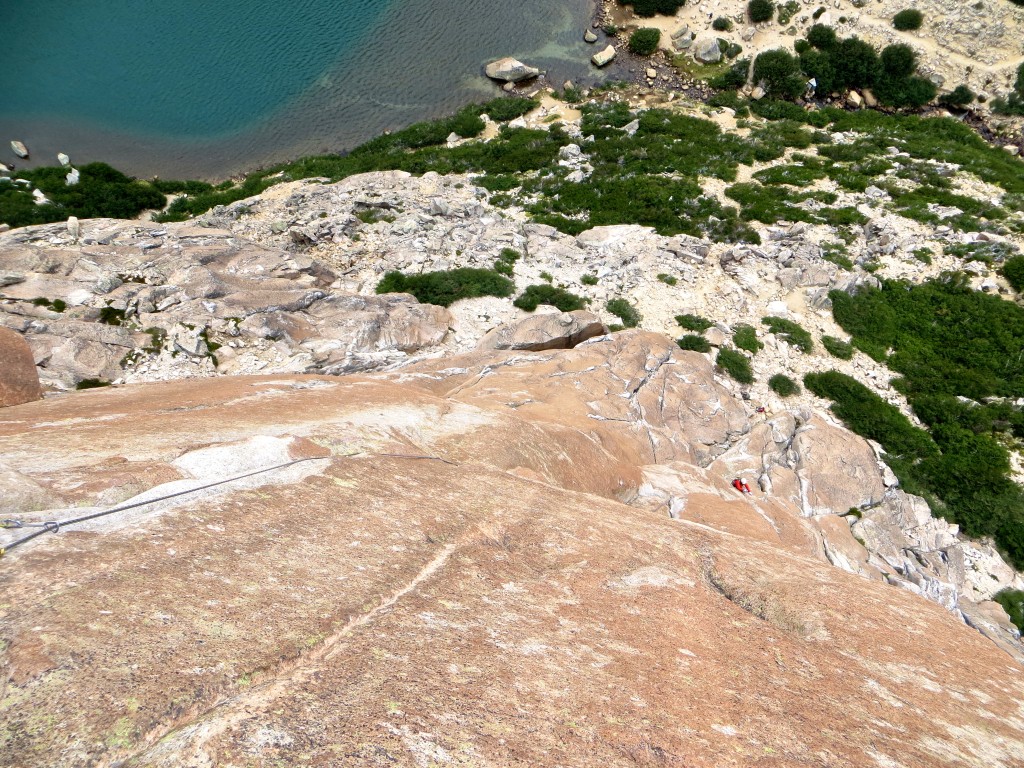 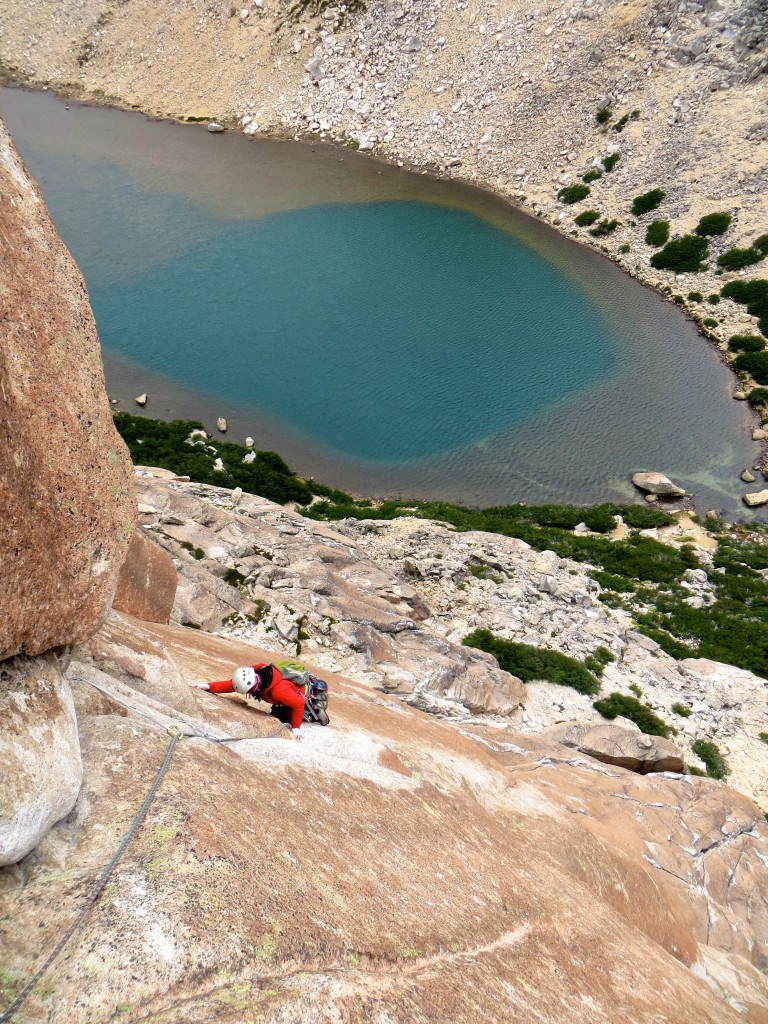 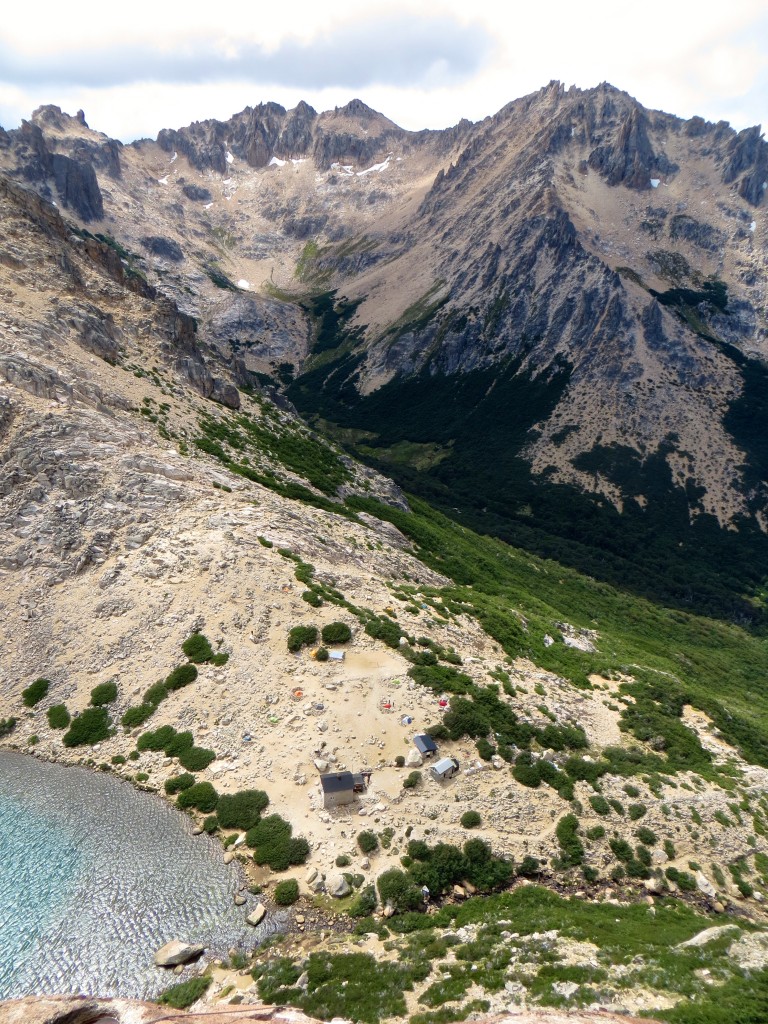 Views of the Refugio and our tent (green) from the top of Sifuentes-Weber route (Feb. 2015). 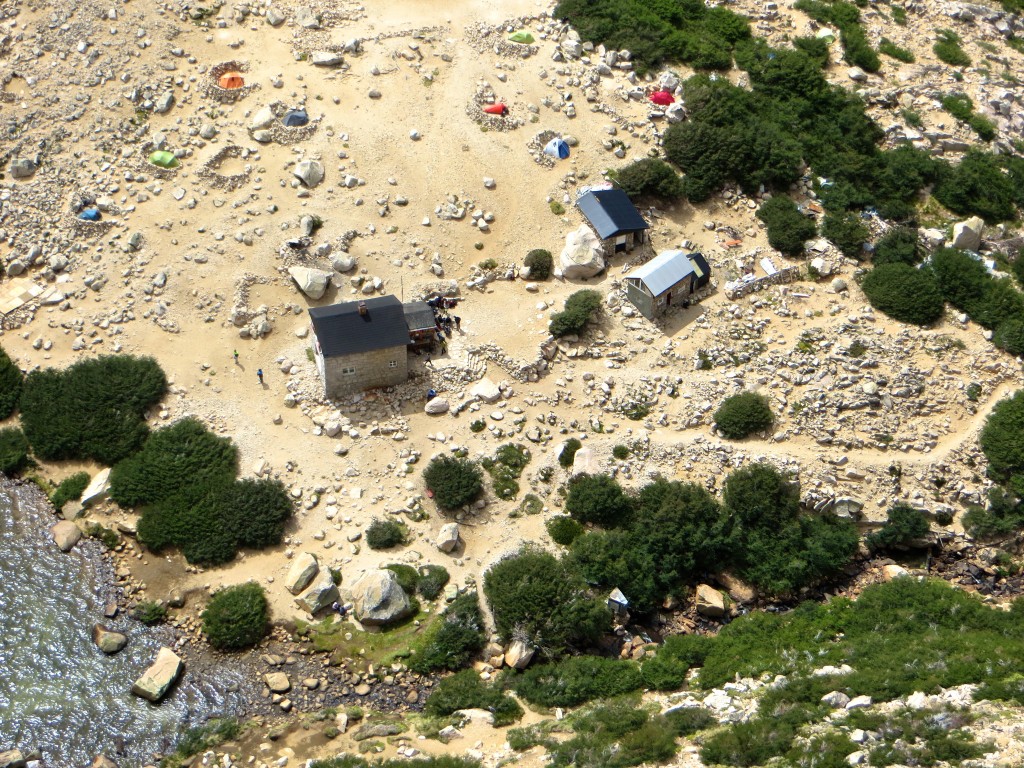 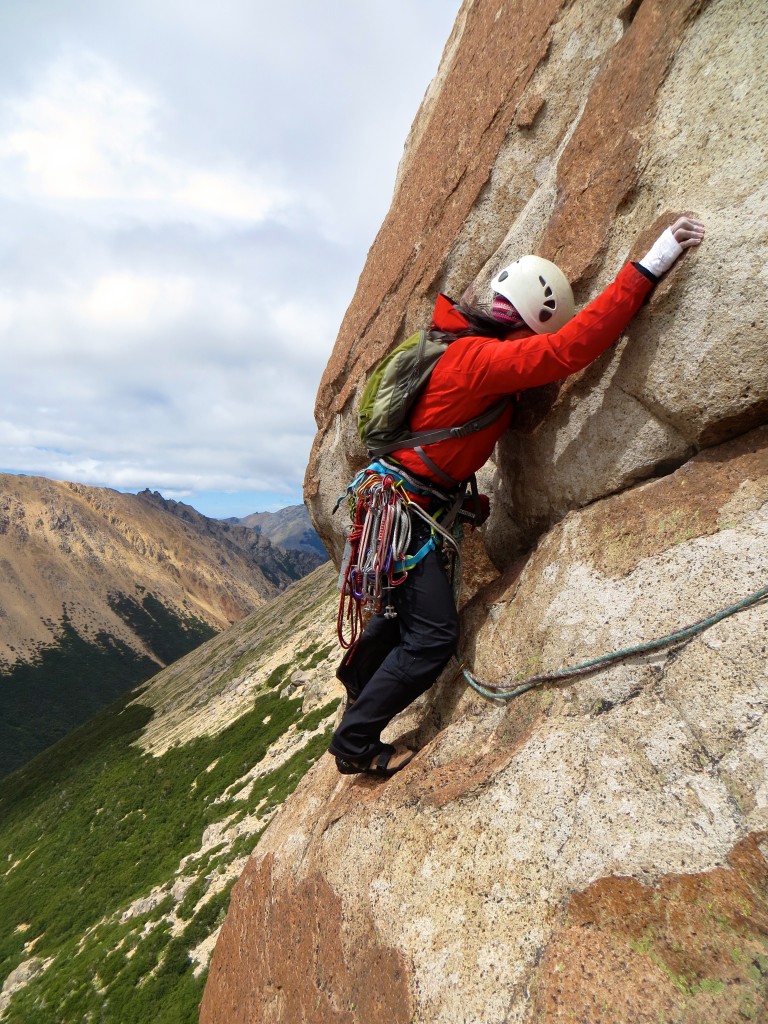 Shirley finishing up the traverse pitch for the “Monti finish” variation (Feb. 2015). 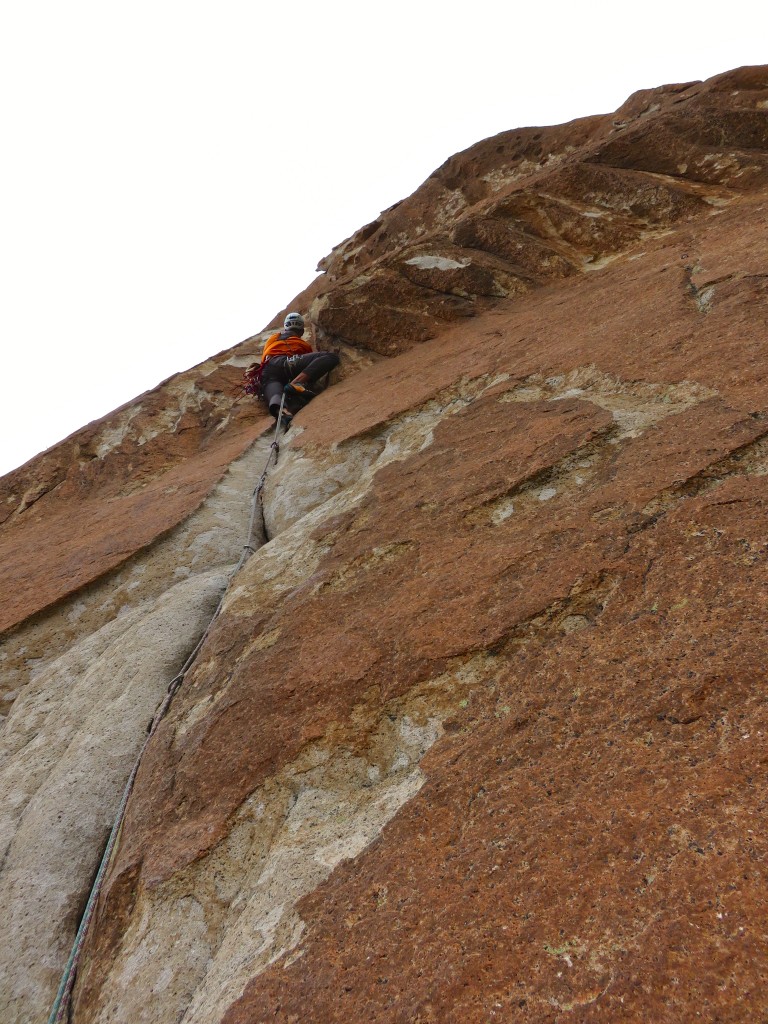 Leading the fourth and final pitch of the outing (#4). This is Sifuentes-Monti. A spectacular piece of climbing (Feb. 2015). 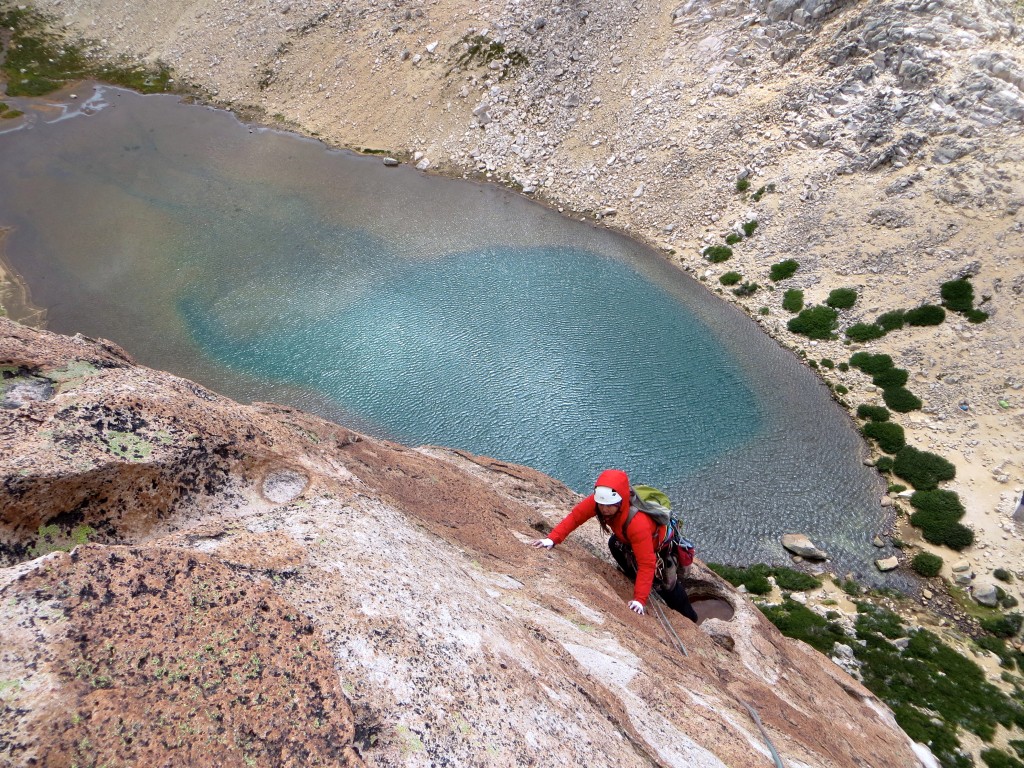 Shirley finishing up the 4th and final pitch of the afternoon (Feb. 2015). 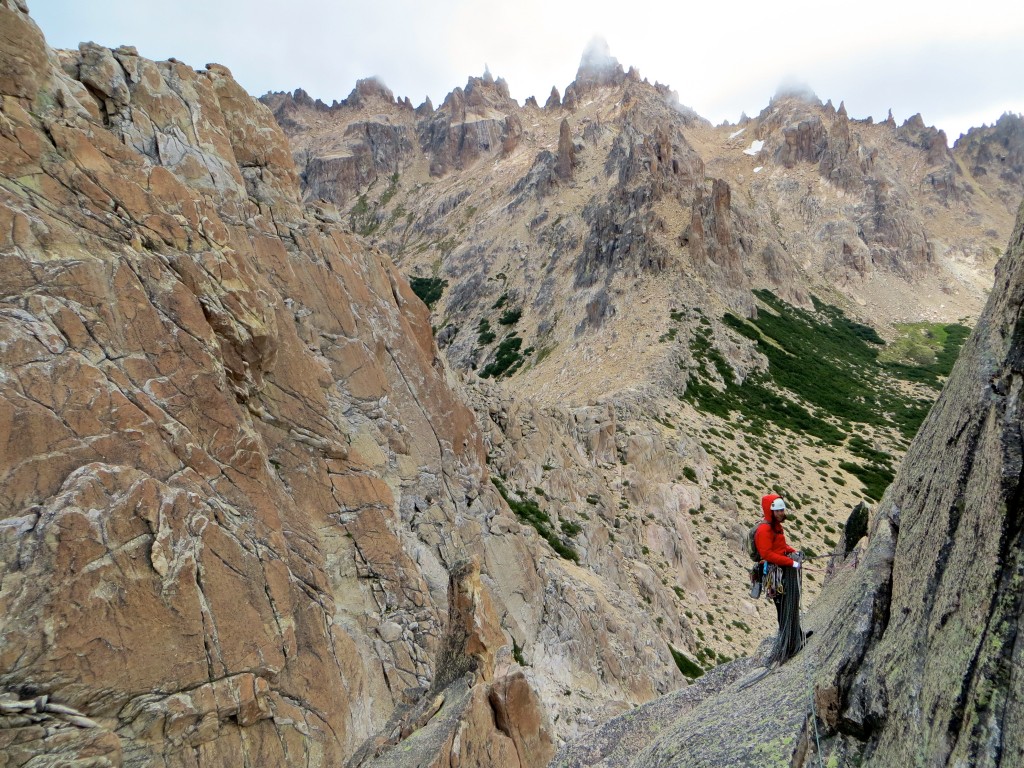 As the wind was picking up, we scrambled over and down to the “backside” (south face) descent. One, single rope rap & some 4th class scrambling down a gully (Feb. 2015). 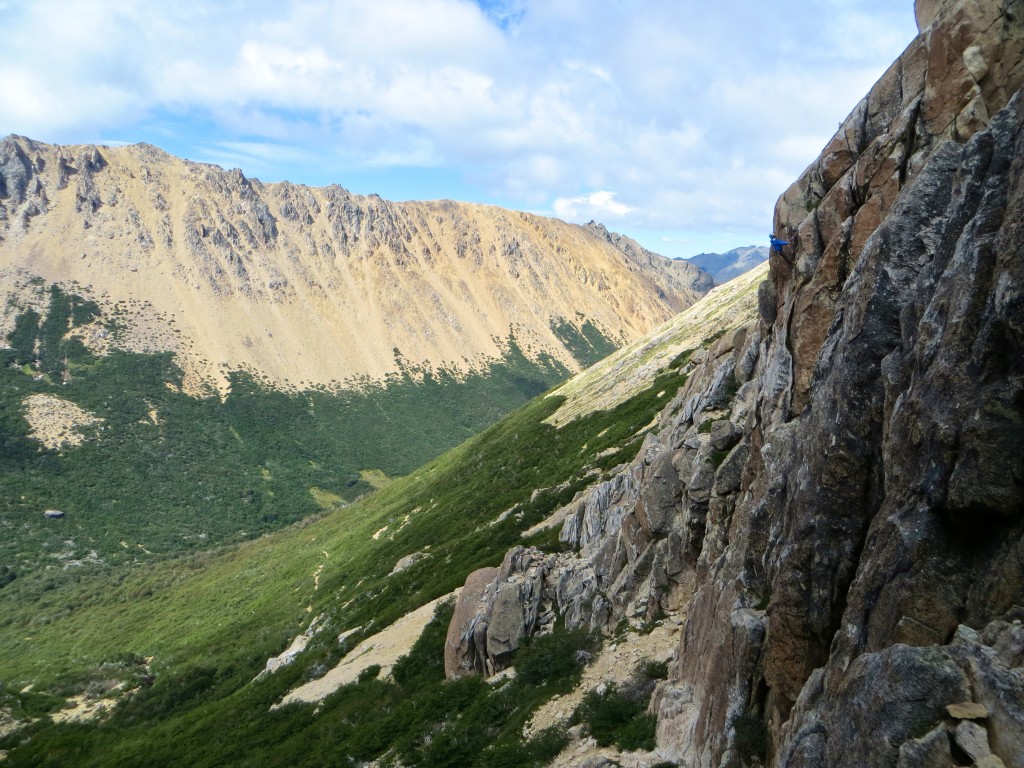 Our friends Joe (visible at top of the pitch) and Barry (not visible) from the Carolinas climbing some sport pitches behind Aguja Frey (Feb. 2015). 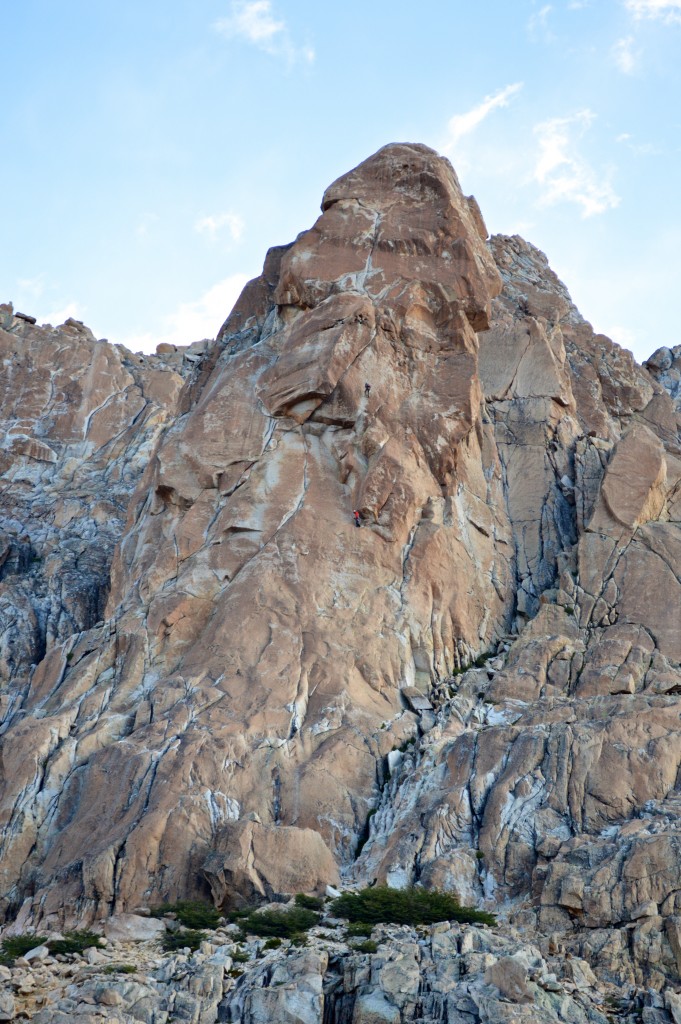 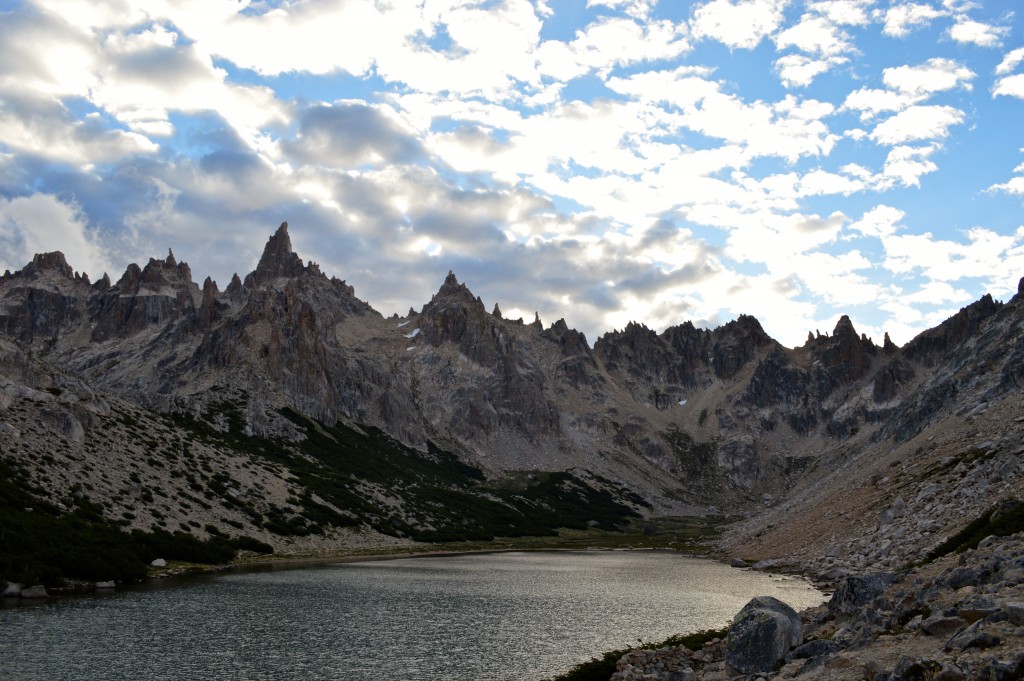 Go to Torre Principal.
Go back to Frey.