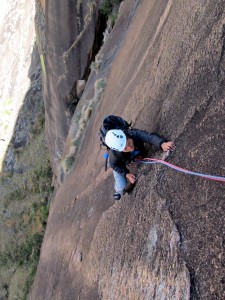 The following day we headed for the Lemur Wall which we had seen from Alien two days prior. The route, Pectorine, looked steep and blank from the approach hike. It’s not until you’re standing at the base that you start to see some features in the black granite above. Shirley took the first pitch and we were both reminded of one of the high quality, varnished sandstone faces from Red Rocks (one of the Sour Mashpitches say)…except it was granite. Things were hot, holds were small, rounded and greasy and we were both starting to complain about our finger tips being mangled by the very sharp granite. Pitch two started up the main wall via four A0 moves to bypass a blank lower section. Above, the remaining six pitches were all quite similar: vertical wall with mostly good holds (sharp ones above pitch 1) peppered throughout. The bolting is intelligent (in retrospect) if a bit spicy in places. Possibility of a 30 footer seemed routine. Pitch 5 featured a cool rightward traverse on some very dark granite. We topped out and (unaware of the walk off option) rapped down once again in stressful, high-wind conditions. On the hike down to camp, we almost did not notice a family (gang?) of lemurs sitting quietly in a tree above the trail. It was only when we stopped and took out the camera that the commotion started. Our first sighting and we were both awestruck! I guess it hit us for the first time where we’ve been climbing! 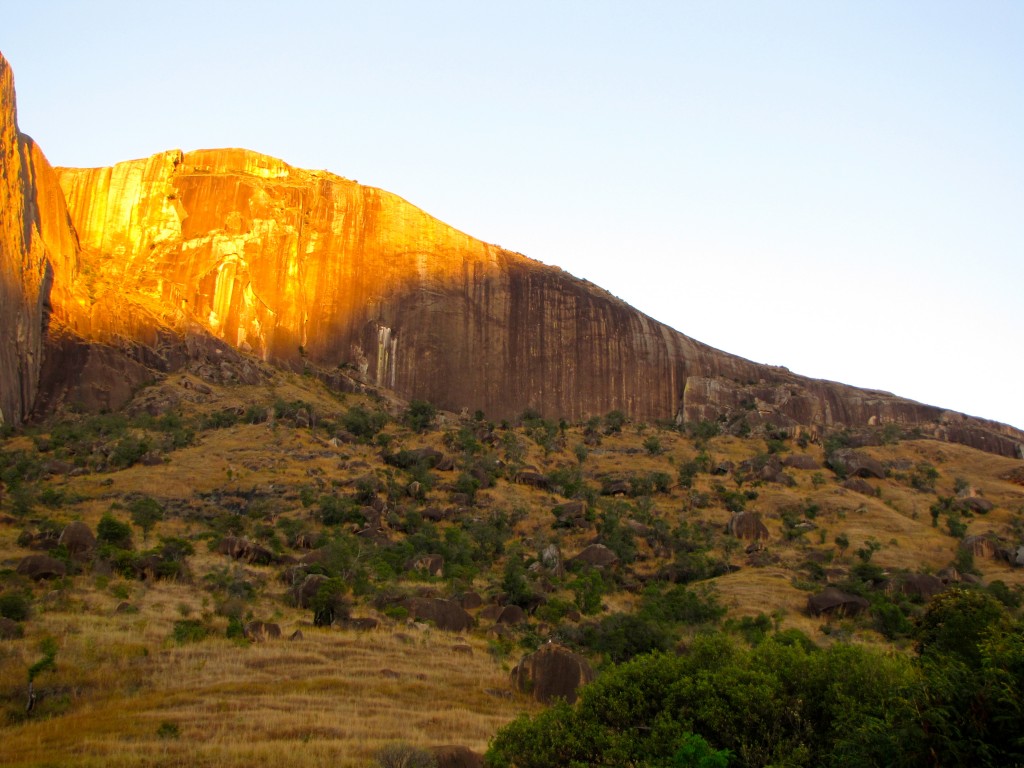 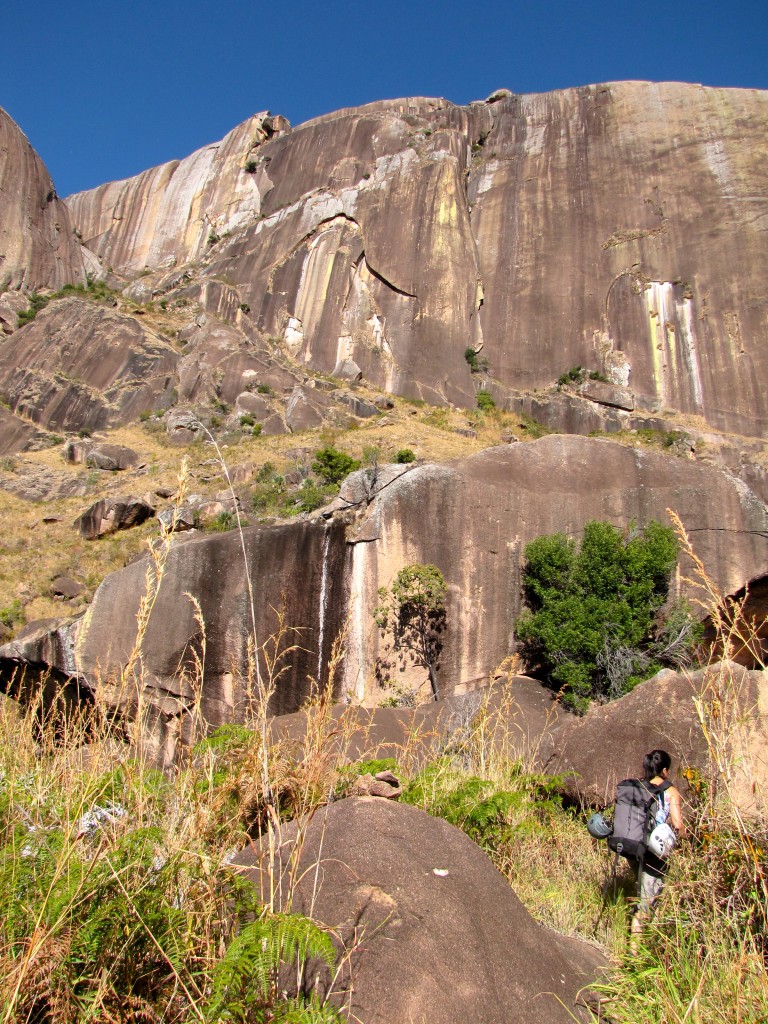 Approaching Pectorine route on the Lemur Wall, a great 7-pitch long 6b. The route follows the face just right of the obvious dihedral (& center of photo; Sept. 2011). 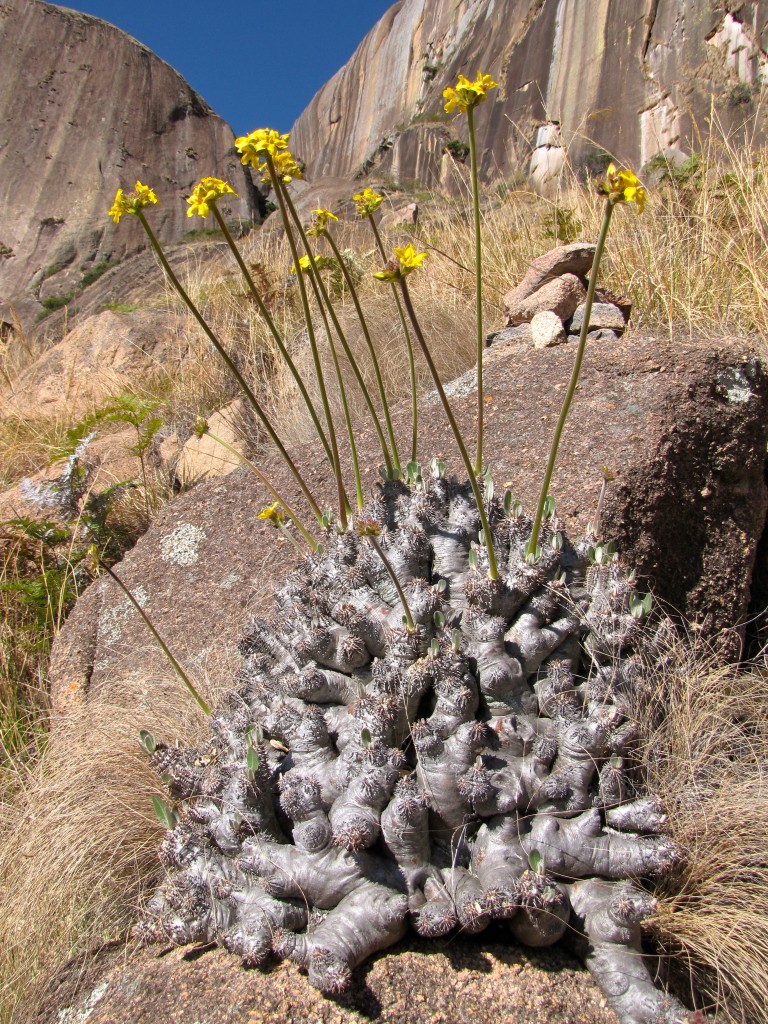 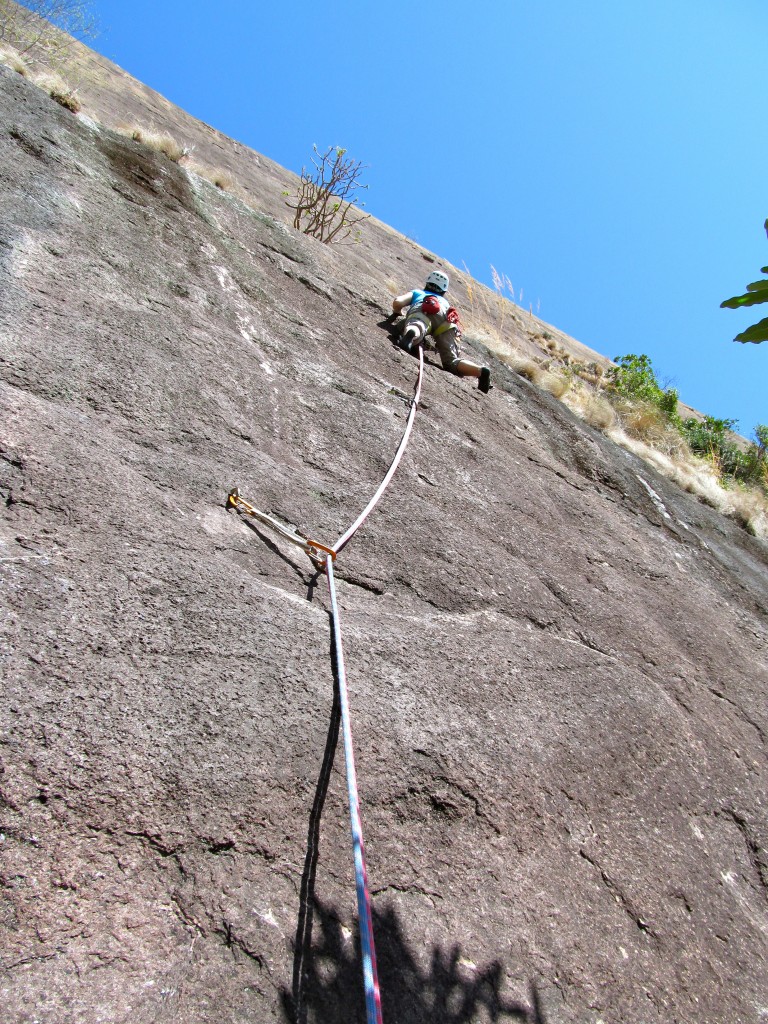 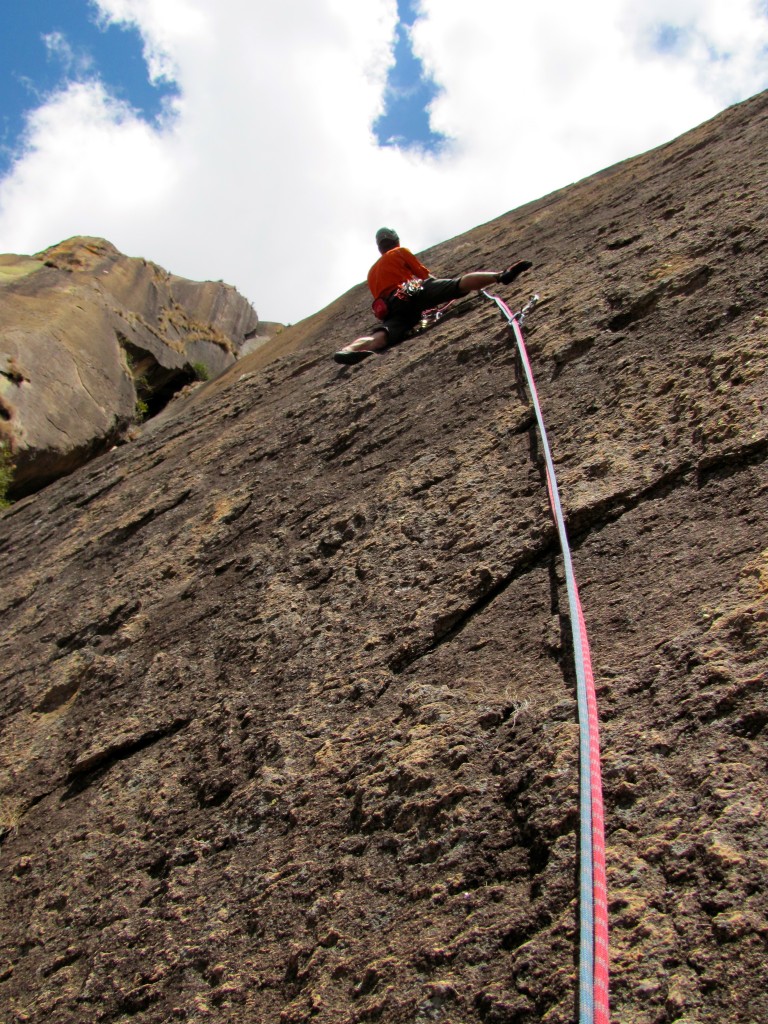 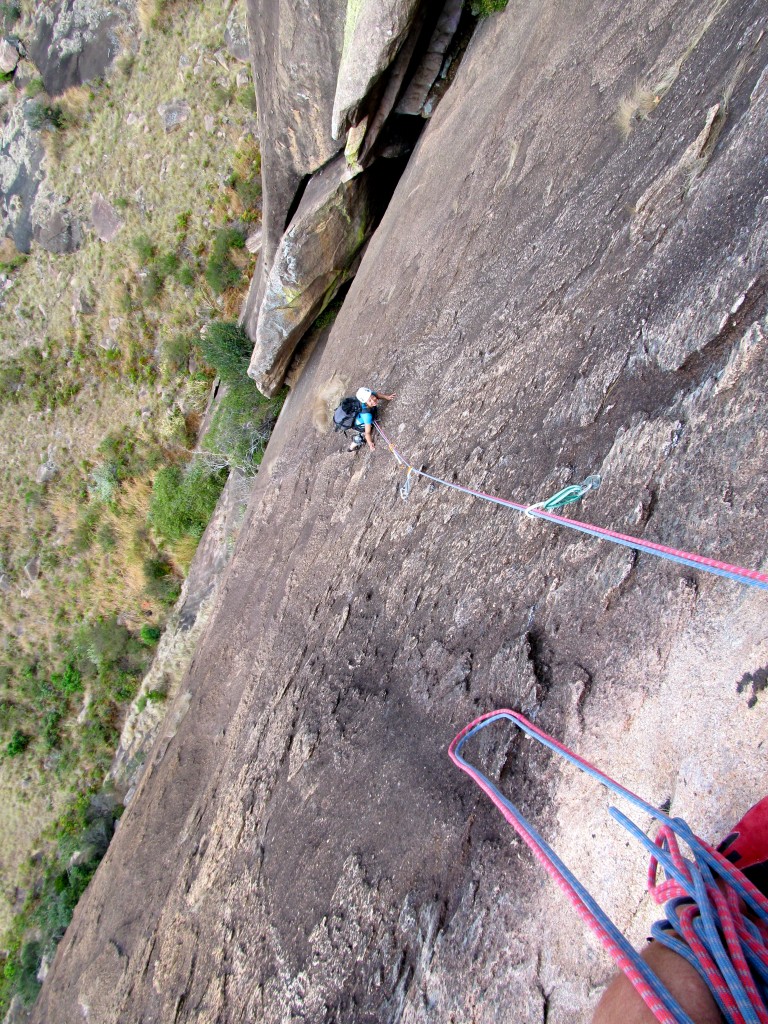 Shirley enjoying the fun climbing on pitch 3 of Pectorine (Sept. 2011). 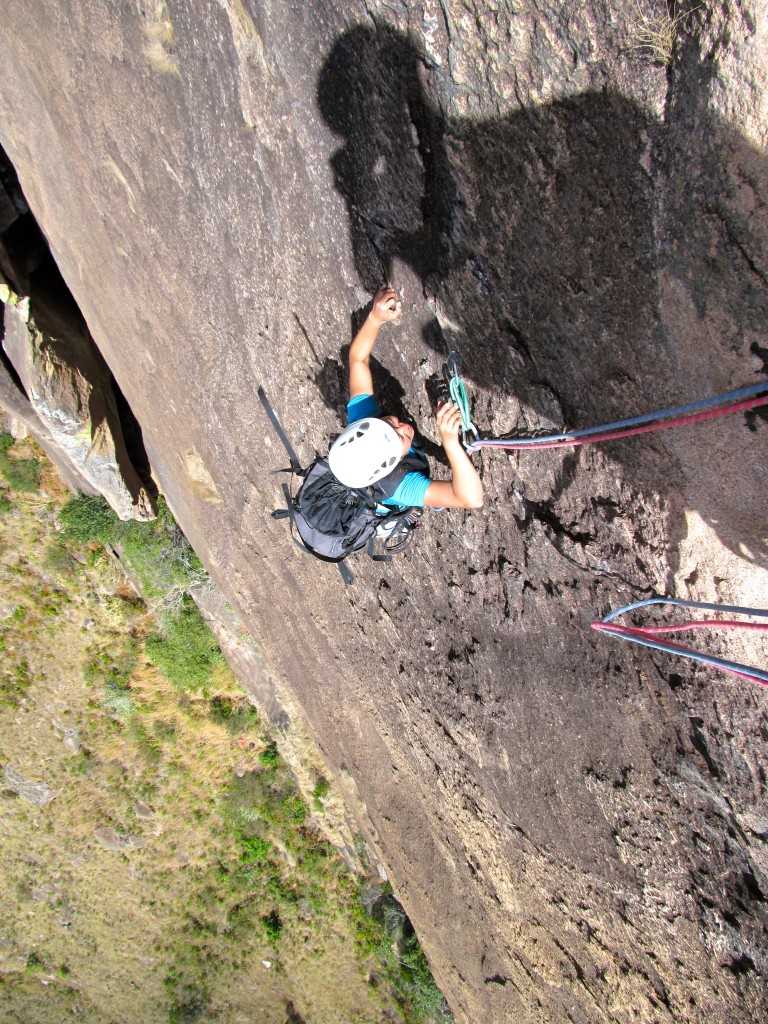 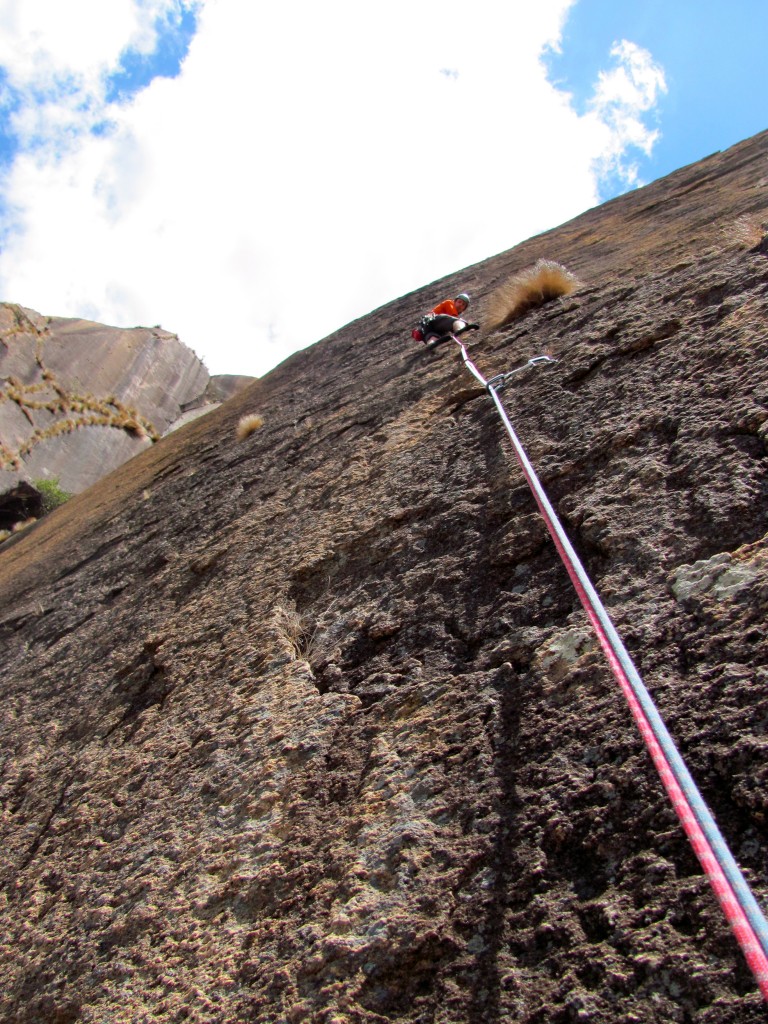 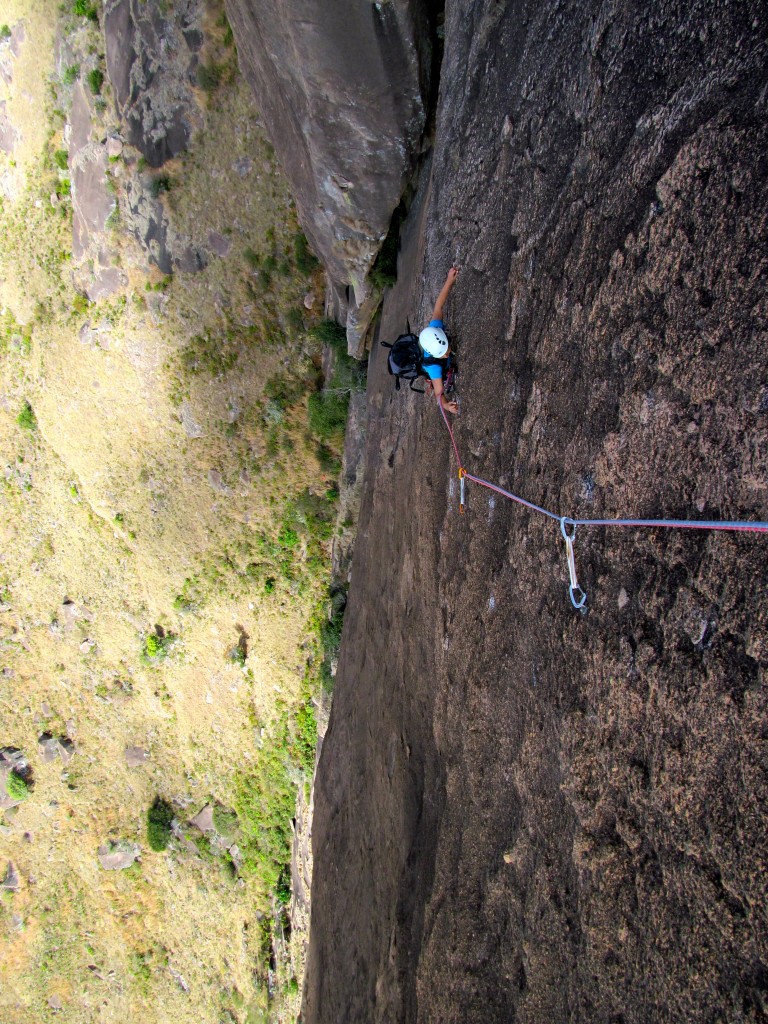 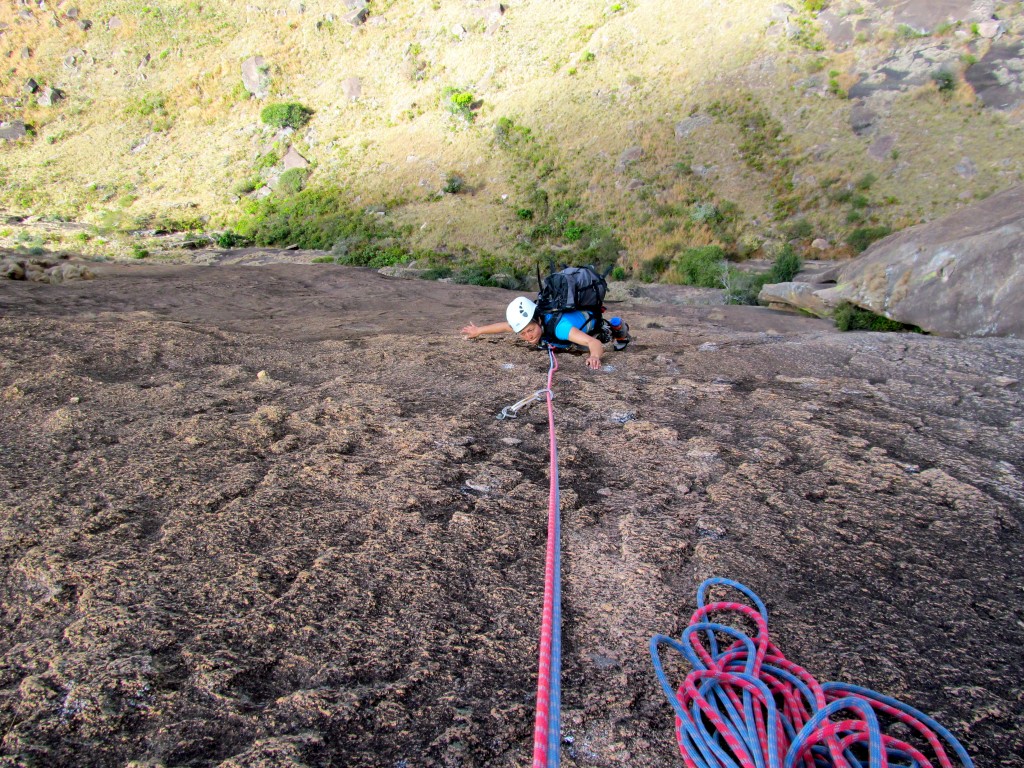 Shirley on pitch 4 of Pectorine...lookee that beautiful granite! September 2011. 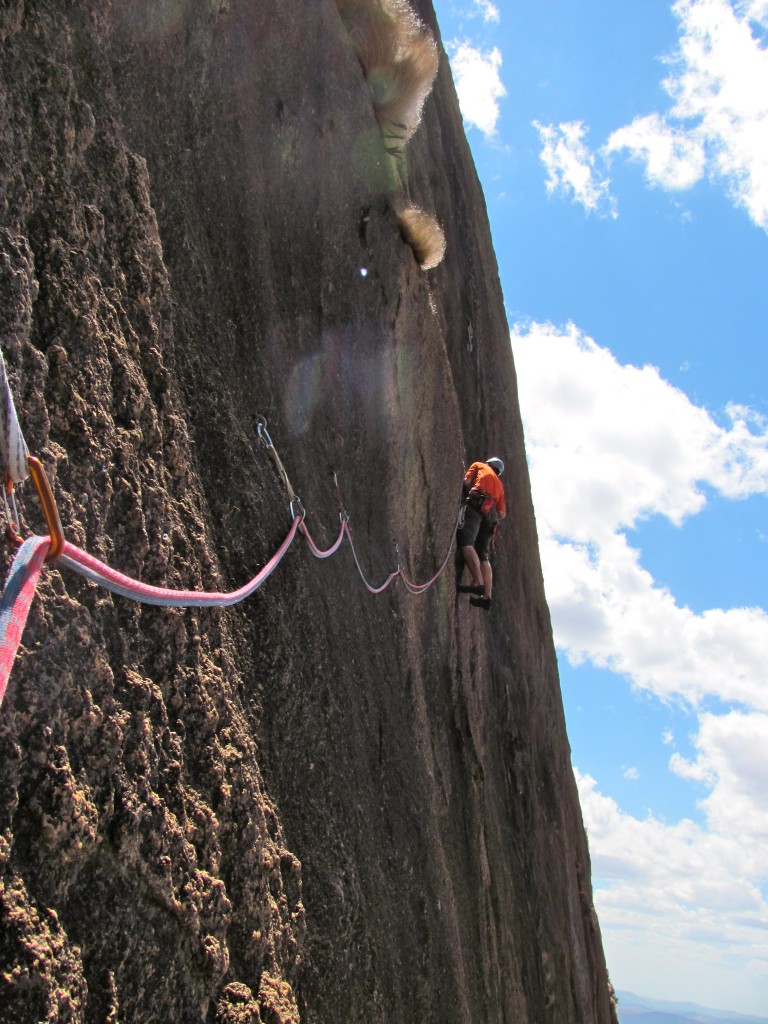 Leading the spectacular traverse on pitch 5 of Pectorine (Sept. 2011). 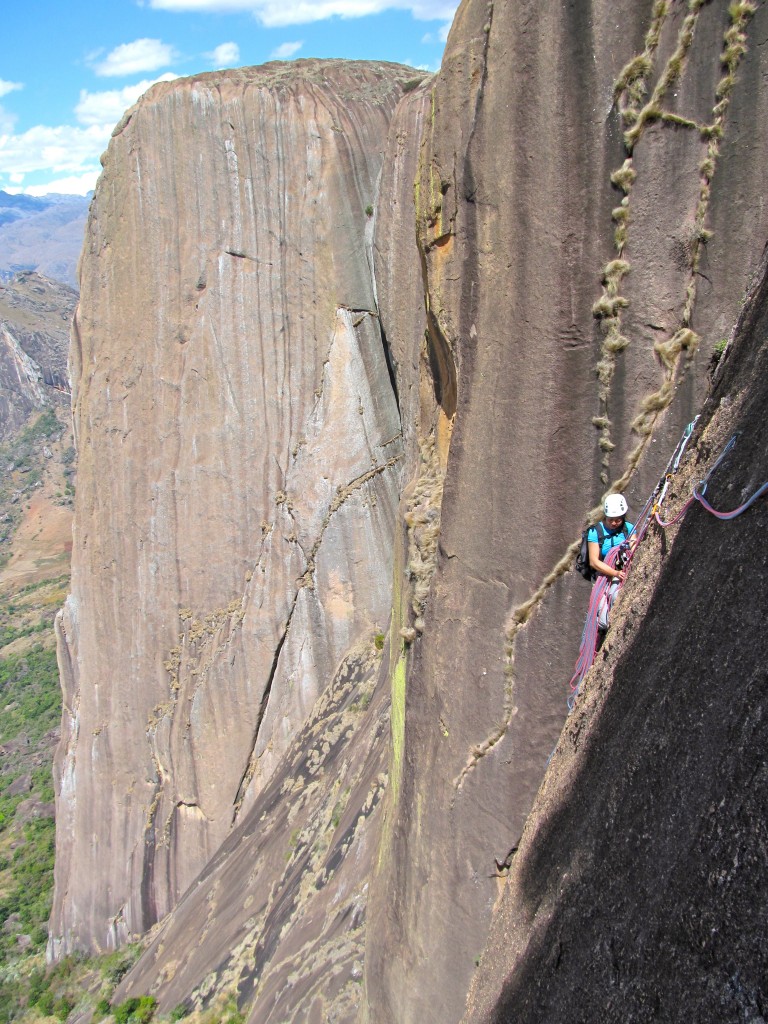 Looking back at Shirley belaying me on the pitch 5 traverse of Pectorine. The beautiful Karambony Pillar is in the background (Sept. 2011). 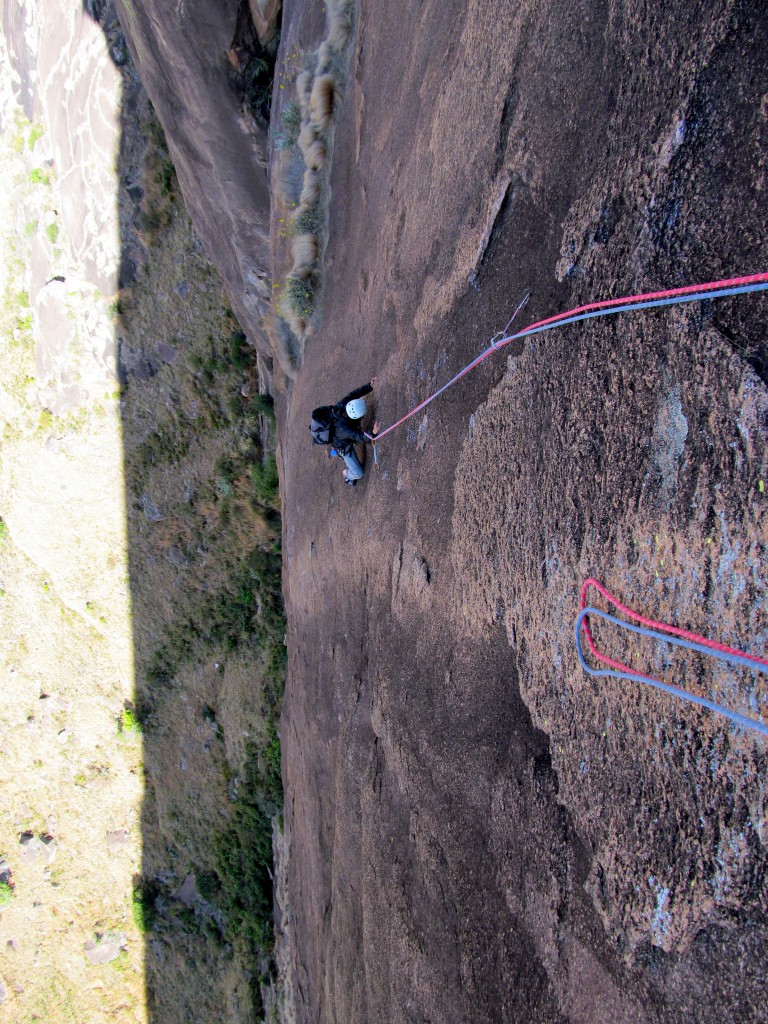 Shirley on the spectacular pitch 5 (above the traverse) of Pectorine (Sept. 2011). 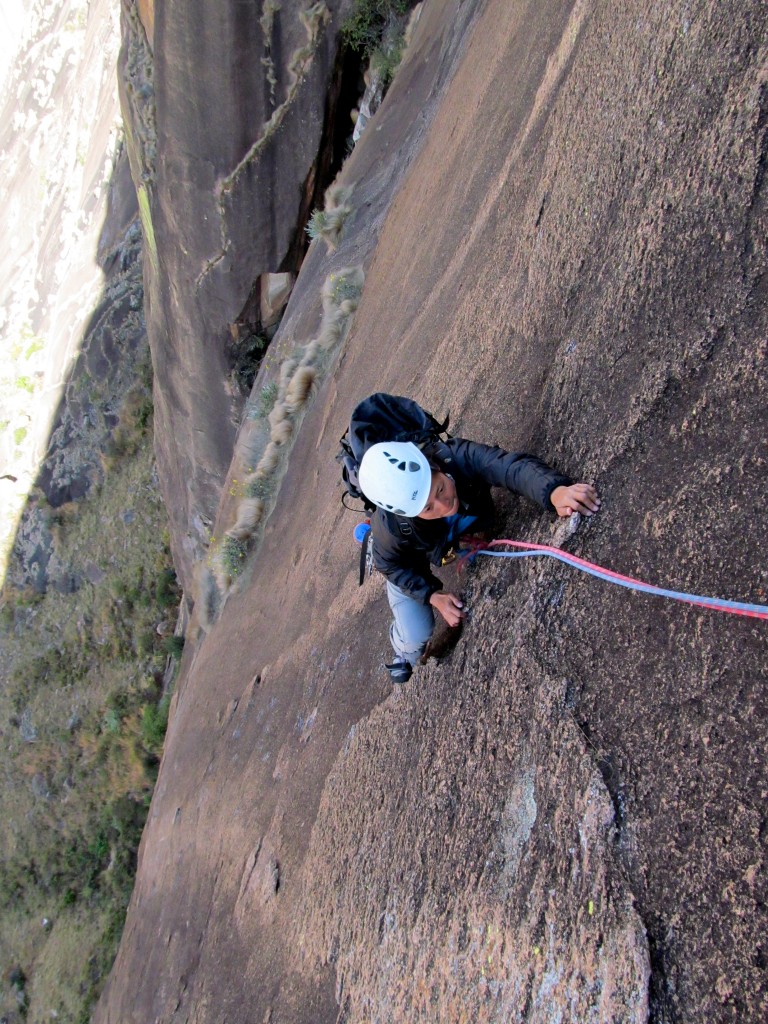 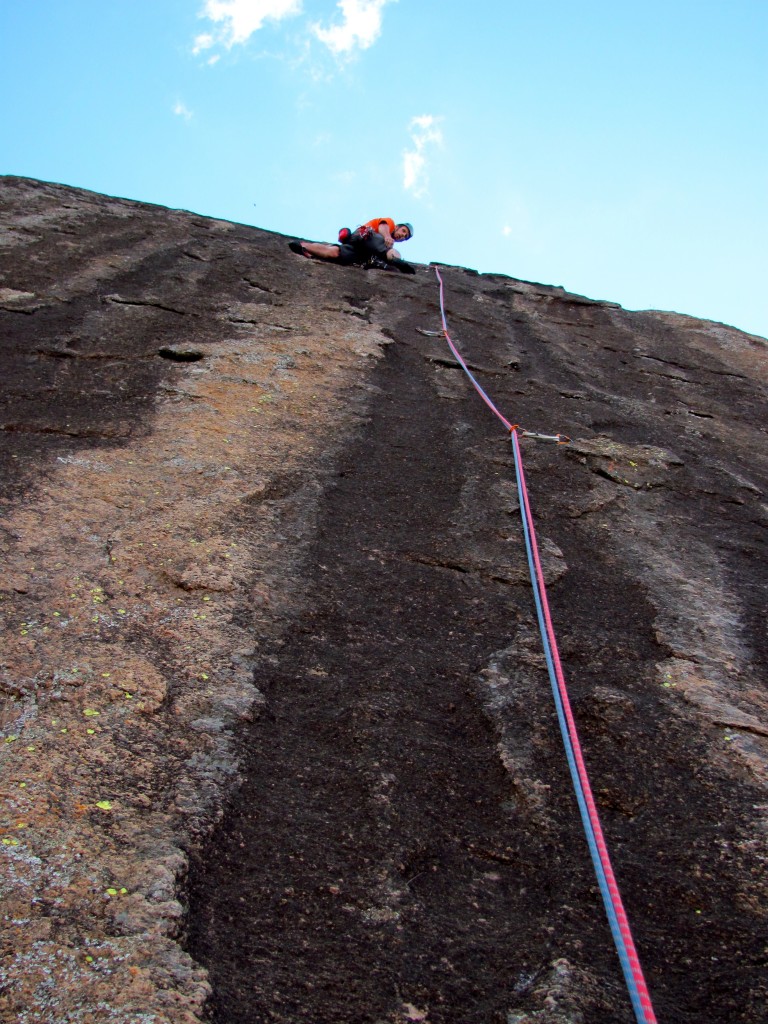 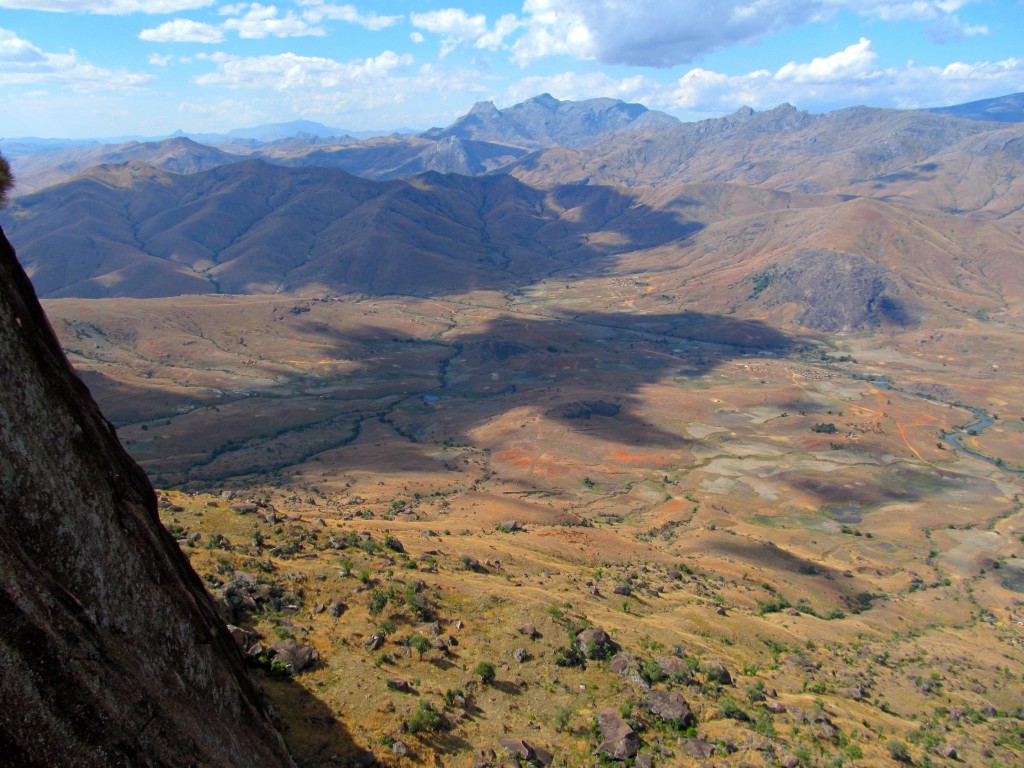 The views of the Tsaranoro Valley from high on Pectorine route (Sept. 2011). 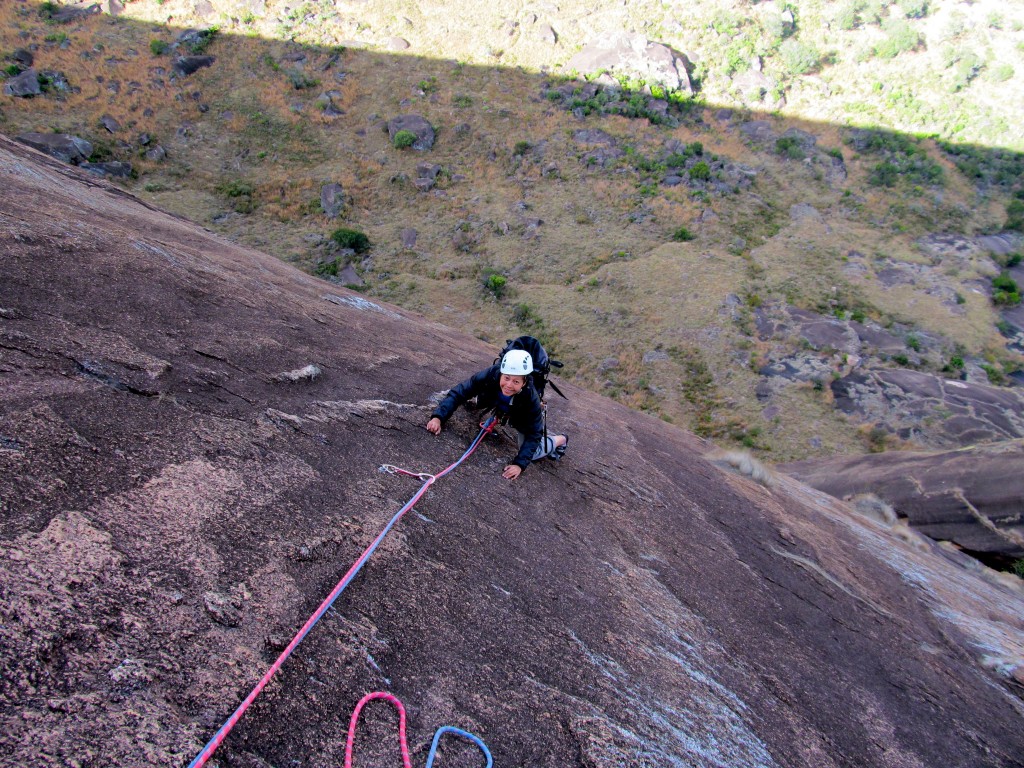 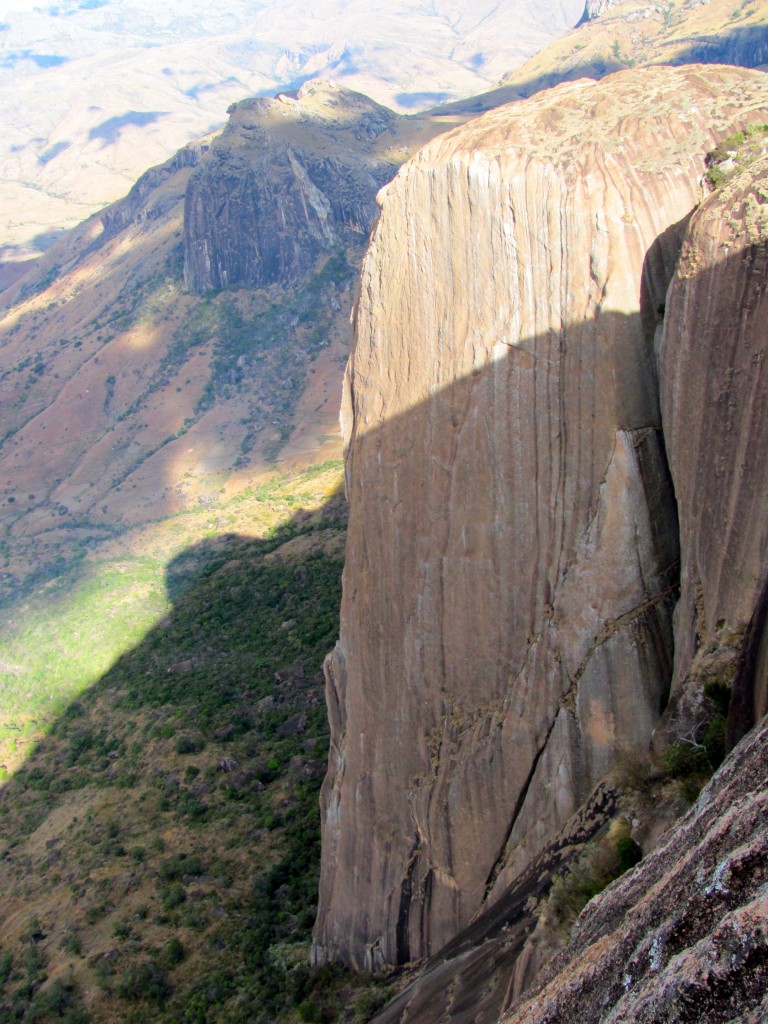 Karambony Pillar from the top of Pectorine on Lemur Wall. Tough Enough is around the corner; the route Rain Boto follows the arete in the photo while Always The Sun climbs the middle of Karambony's face in the photo...all very hard and very undoable (Sept. 2011). 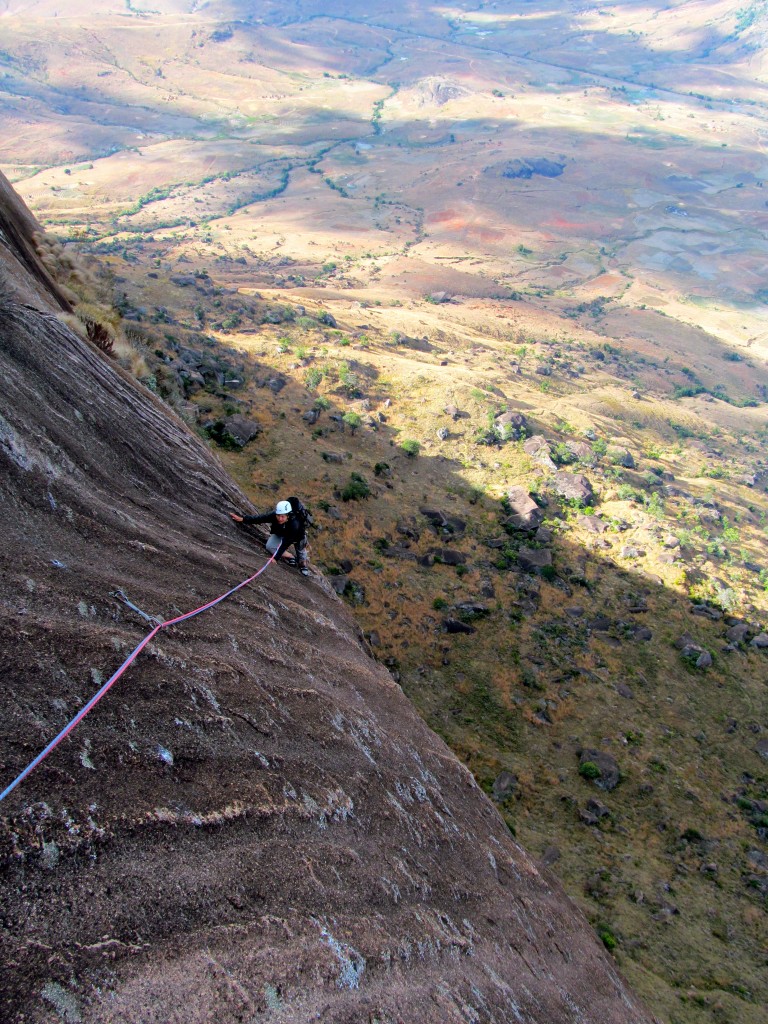 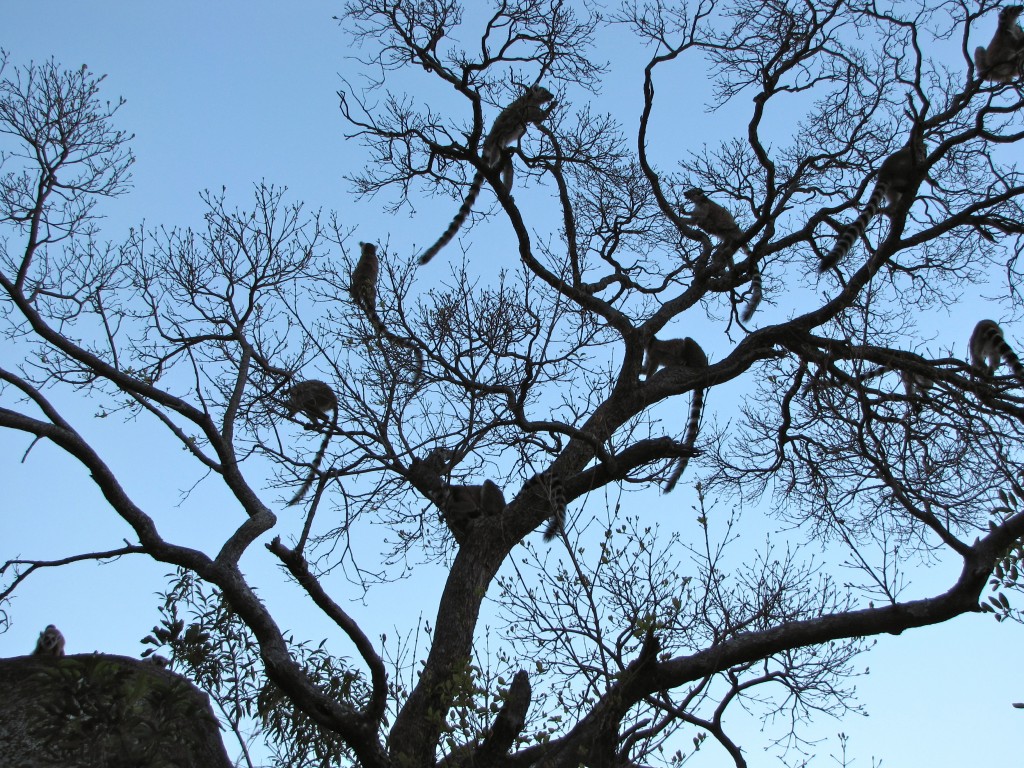 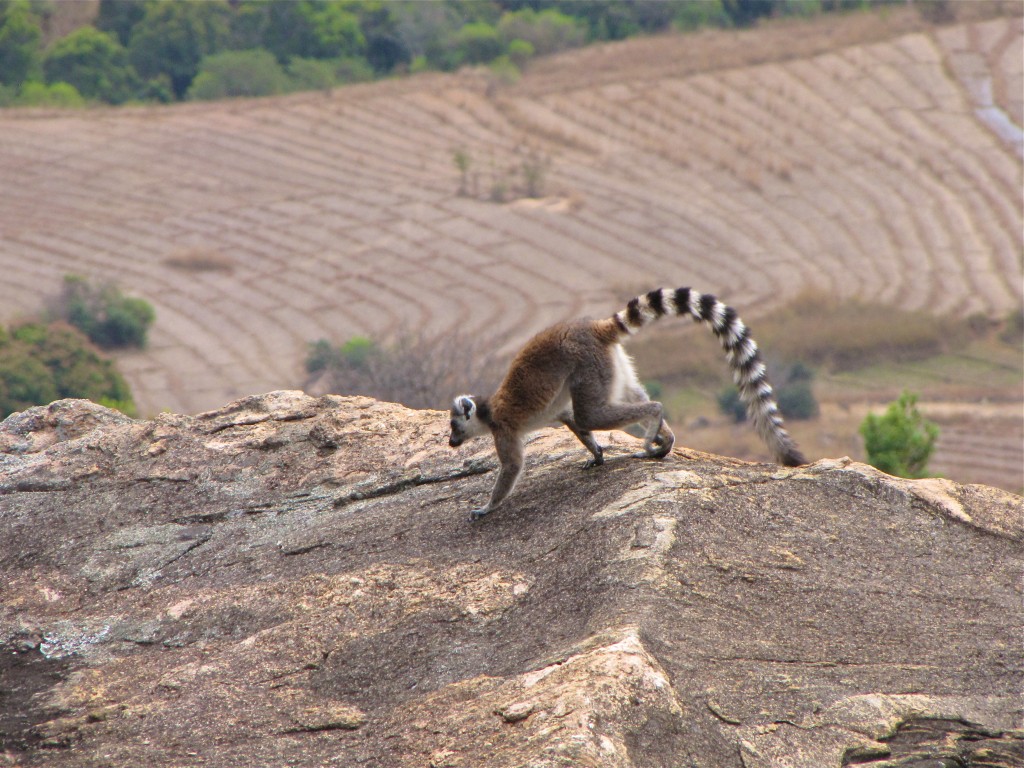 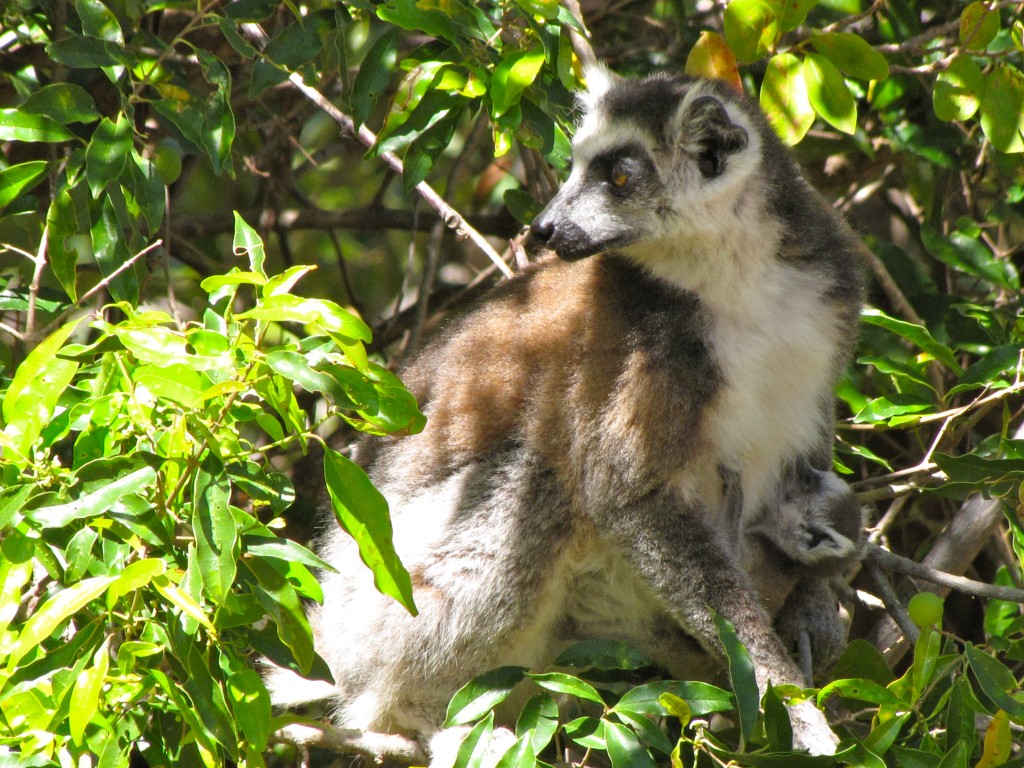 A female Catta Lemur with a baby. We saw this one low in a tree just outside of Camp Catta. She was not very alarmed by our presence (Sept. 2011). 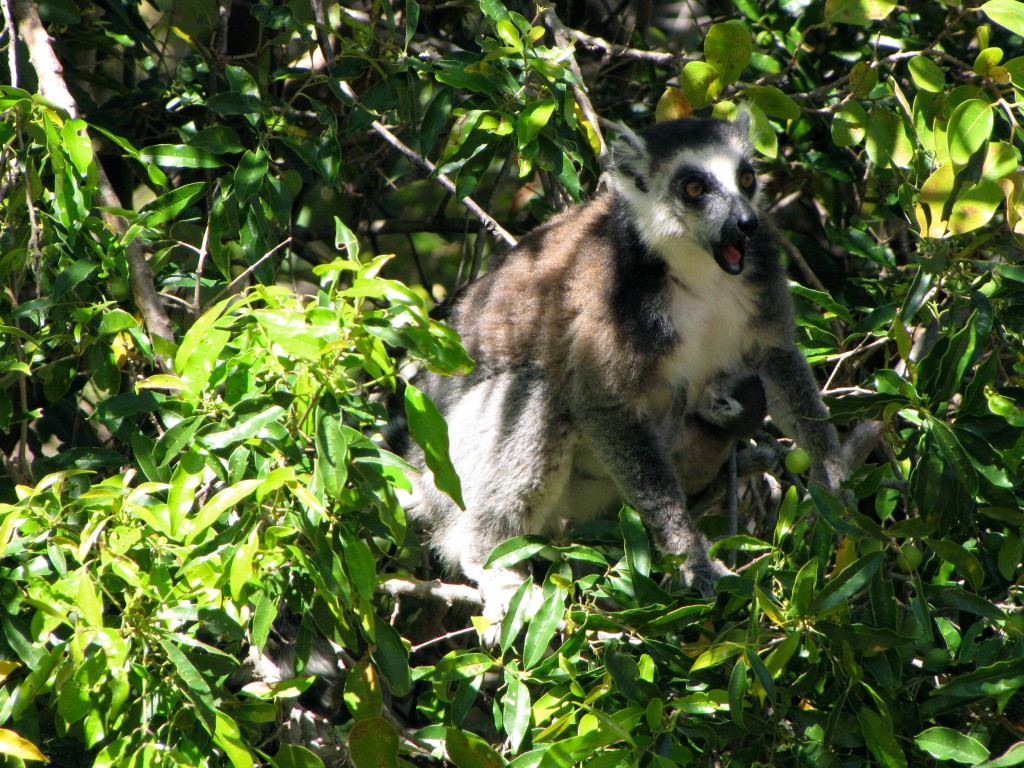 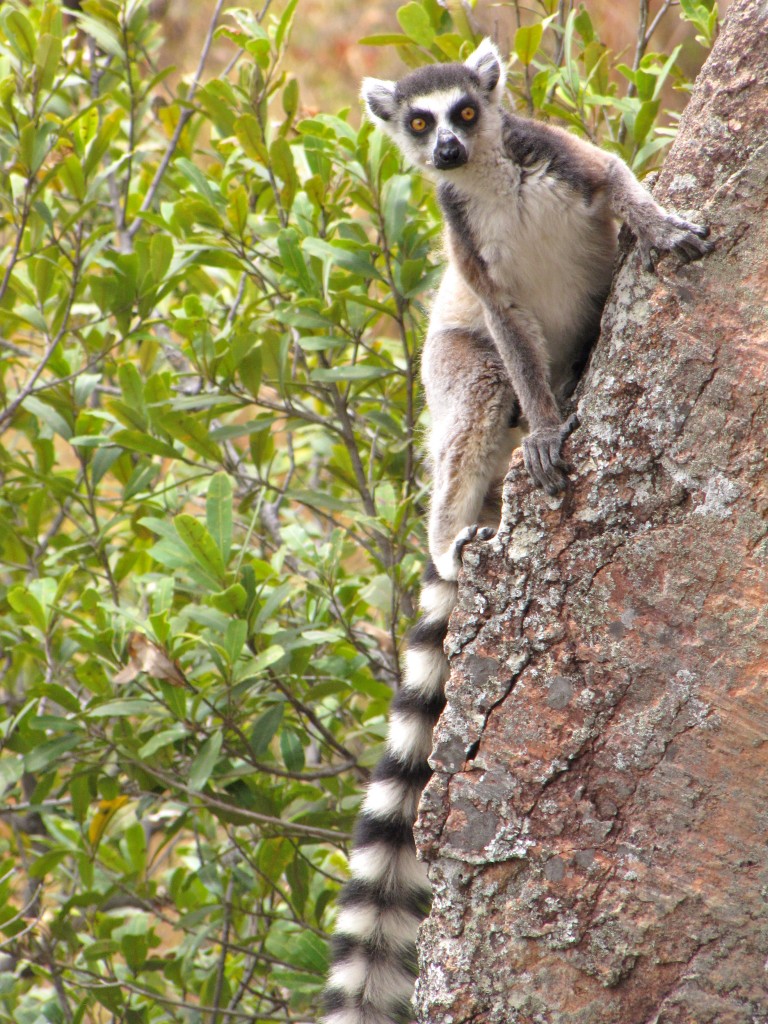 A curious lemur making sweet love to the camera (Sept. 2011).

Go to Part 5.
Go back to Madagascar page.