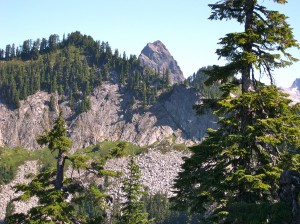 Mount Thomson as seen from the approach along the PCT.

I remember that Shirley & I did the hike in to Bumblebee Pass once in marginal weather & then the rain started as we were deliberating “go” or “no go” on the climb itself. We then cambe back (following season perhaps, in 2003) and climbed the West Ridge route (II 5.6) car to car…not really worth mentioning that part except for the fact that Shirley was still recovering from a partially torn achilles tendon. As a bonus, she got tagged by a yellow jacket (we think) on the hike in. Fun climb in a pretty alpine setting. On our hike out it got dark on us somewhere on the PCT. As we were hiking out (too quietly I guess) we nearly ran into a hiker who just set up his bivy on or right next to the trail. Startled, he screamed…then I screamed…then we all screamed! Then we all laughed. 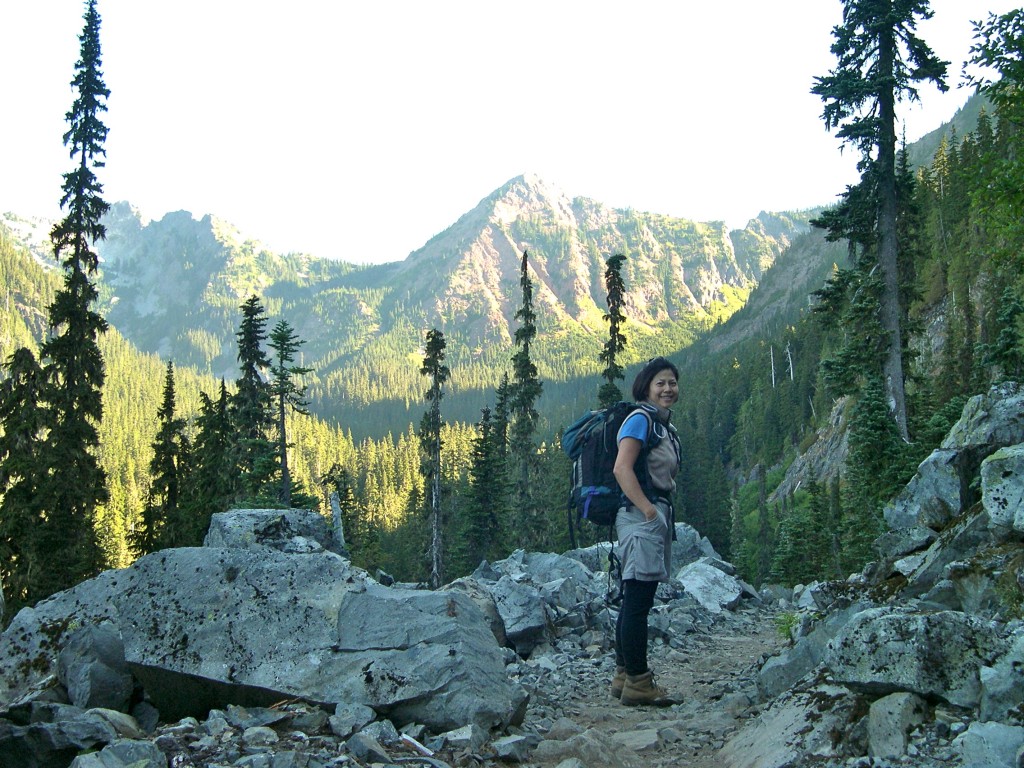 Shirley on the approach hike to Mount Thomson (August 2003). 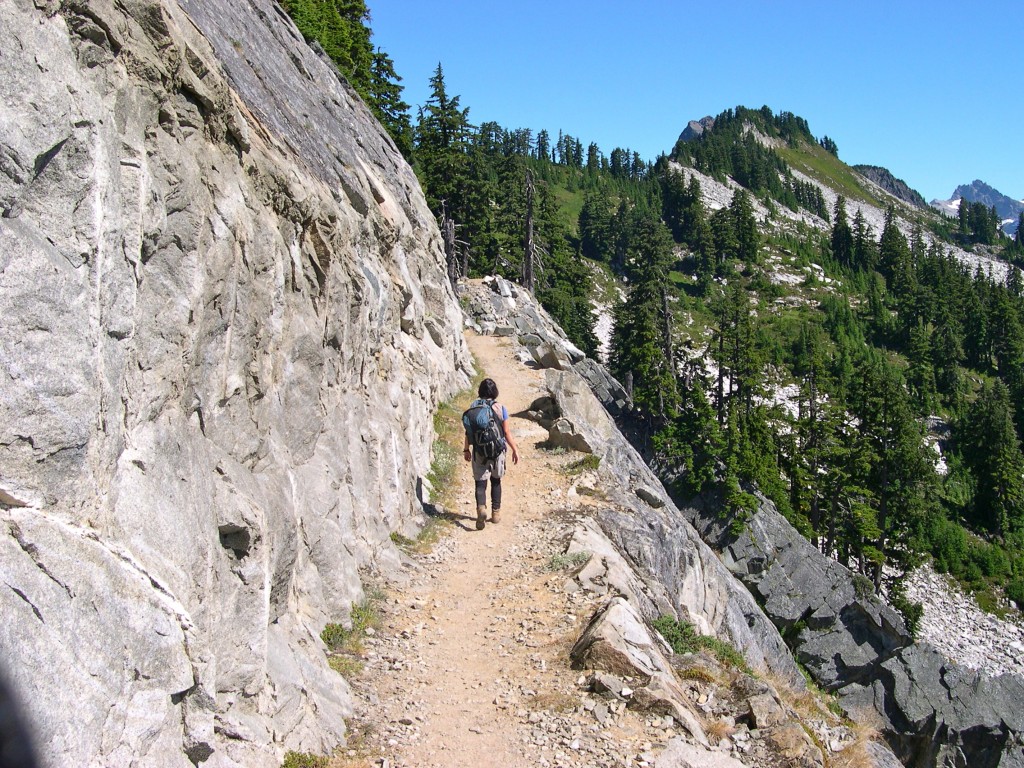 Kendall Katwalk section of the PCT on the approach to Thomson (a small piece of which is visible just right of photo's center beyond the grassy knoll) - the trail here was blasted out of the rockface (August 17, 2003). 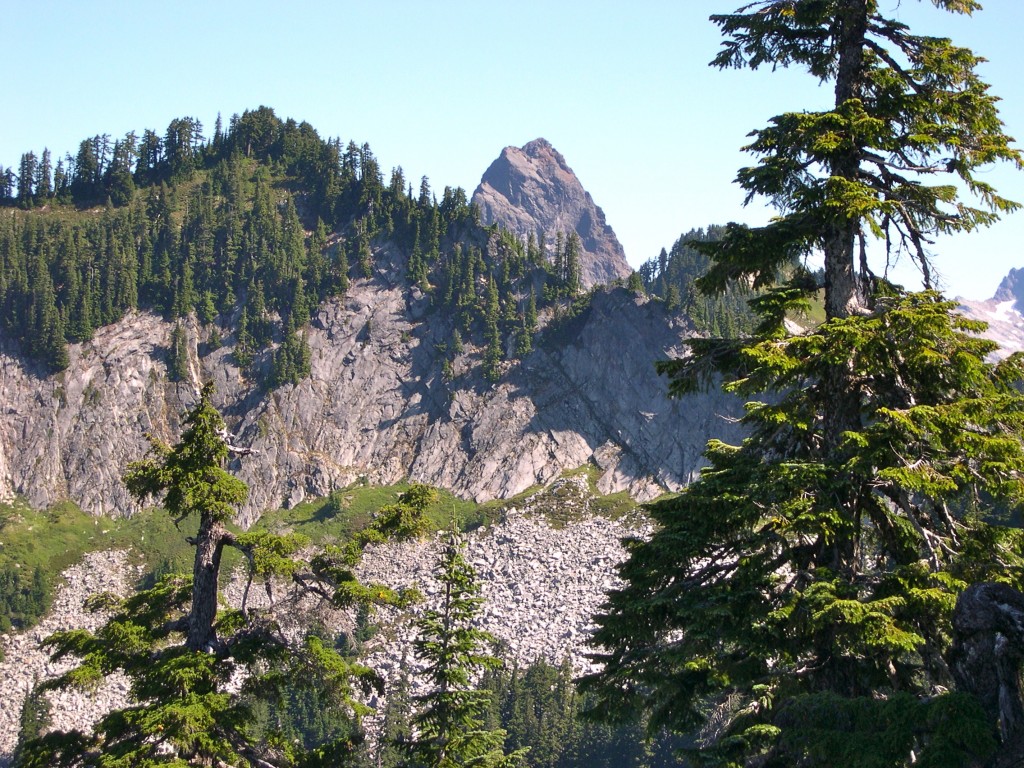 Mount Thomson as seen from the approach along the PCT. 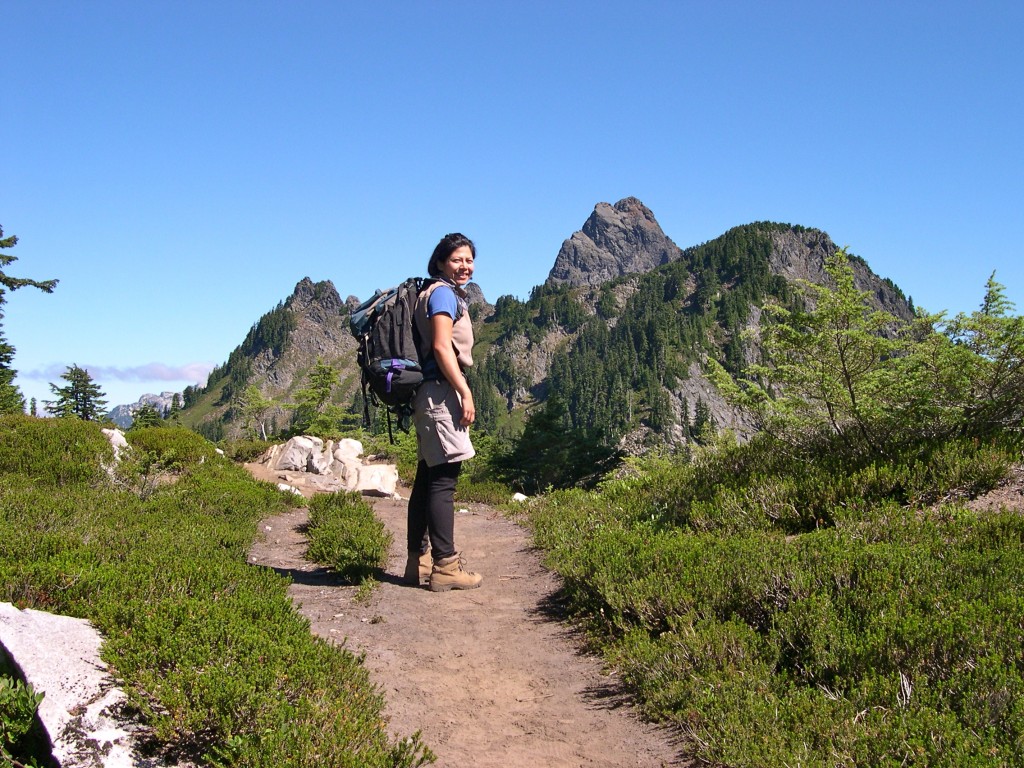 View of Thomson from the PCT above Ridge Lake. The West Ridge route reaches the summit via the left skyline (August 17, 2003). 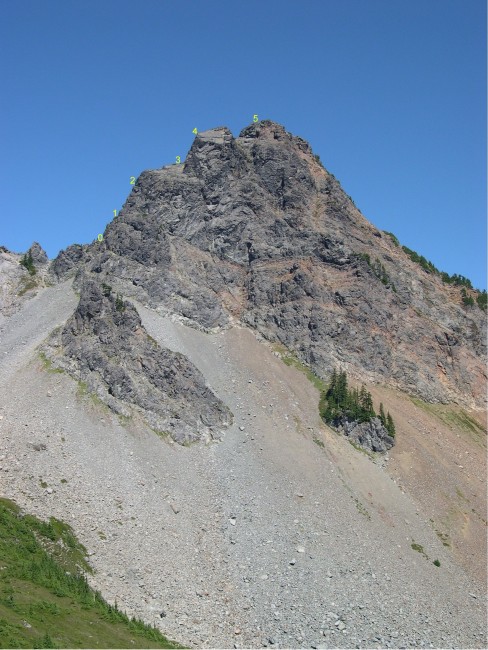 The West Ridge route viewed from Bumblebee Pass as done by us. Pitch one possibly has one 5.6 move (right off the ground - i.e. belay #0) followed by mostly c. 5.4 climbing. Pitch two is again mostly low fifth class with the exception of pulling over a bulge (somewhat loose rocks, two or three 5.6 moves). Pitch three is 3rd or 4th class slab traverse. Pitch four is a 5.4 "staircase" despite its steep look as seen from belay #3. Fifth and final pitch is largely 3rd or 4th class including a scramble down a gravelly path to the notch between the false and true summits. All belays are on comfy ledges with good natural anchors. There's lots of freedom in choosing belay locations as the climb is very "ledgy". 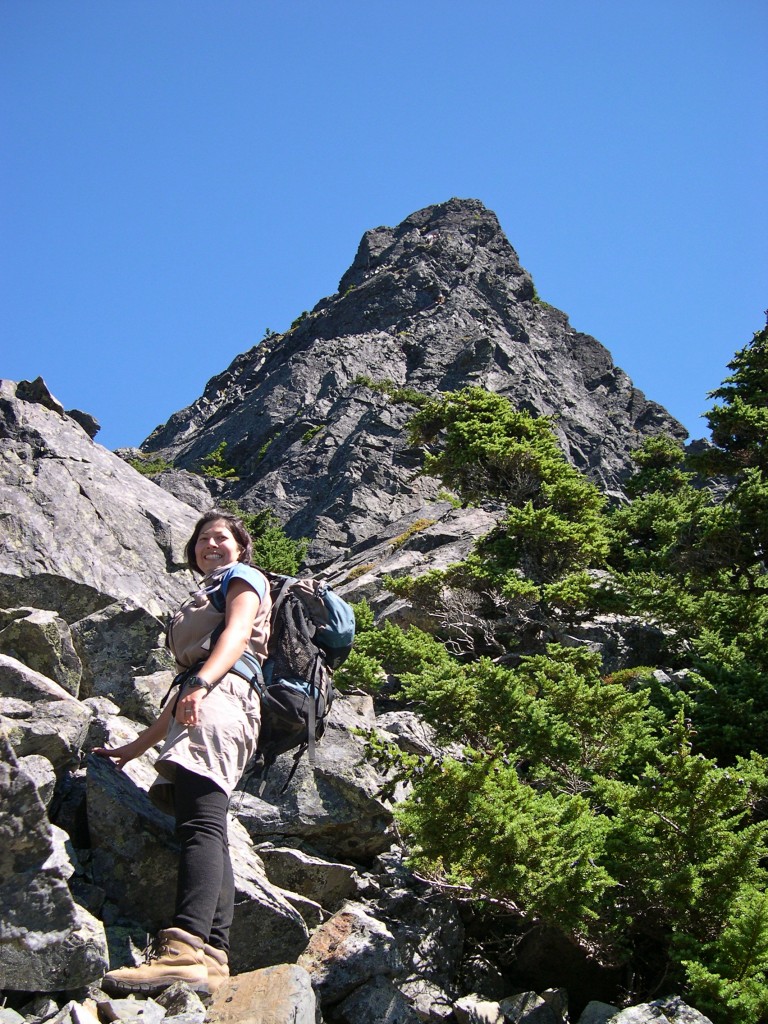 Shirley with the West Ridge route in the background - looking up from the base of the climb (August 17, 2003). 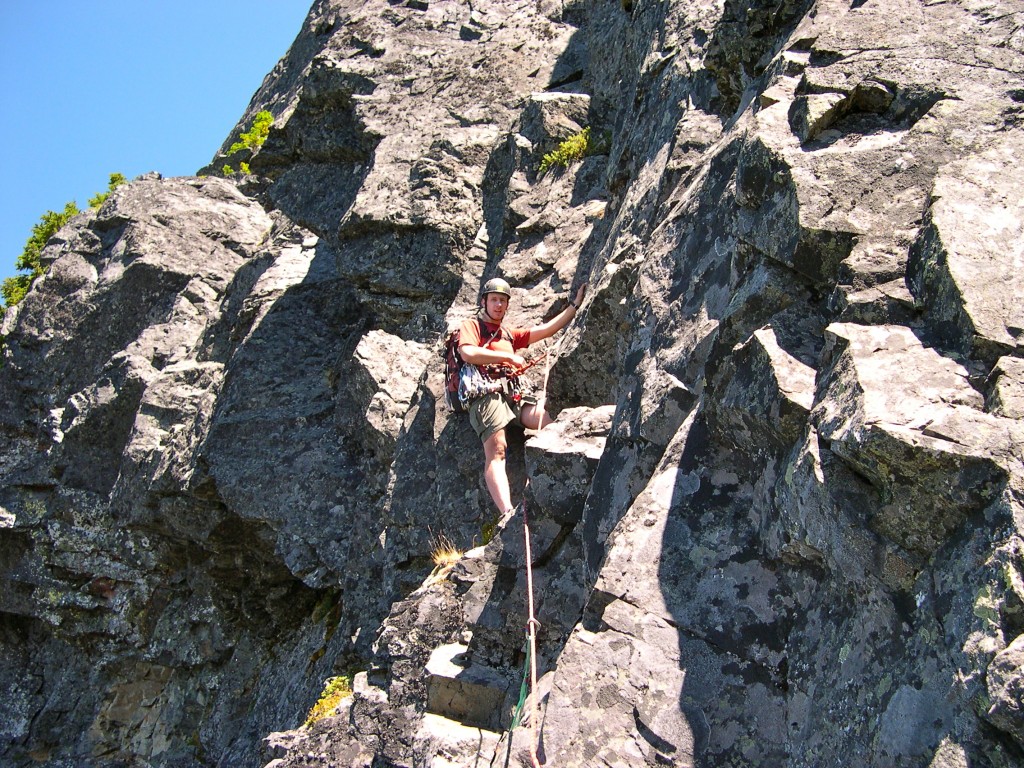 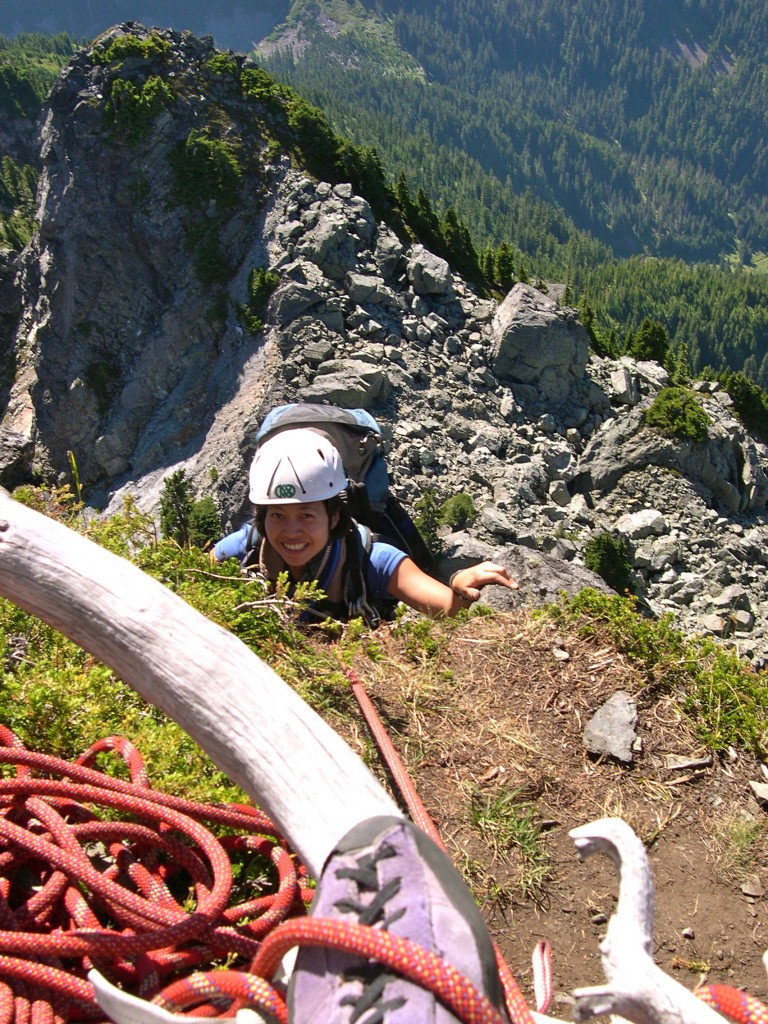 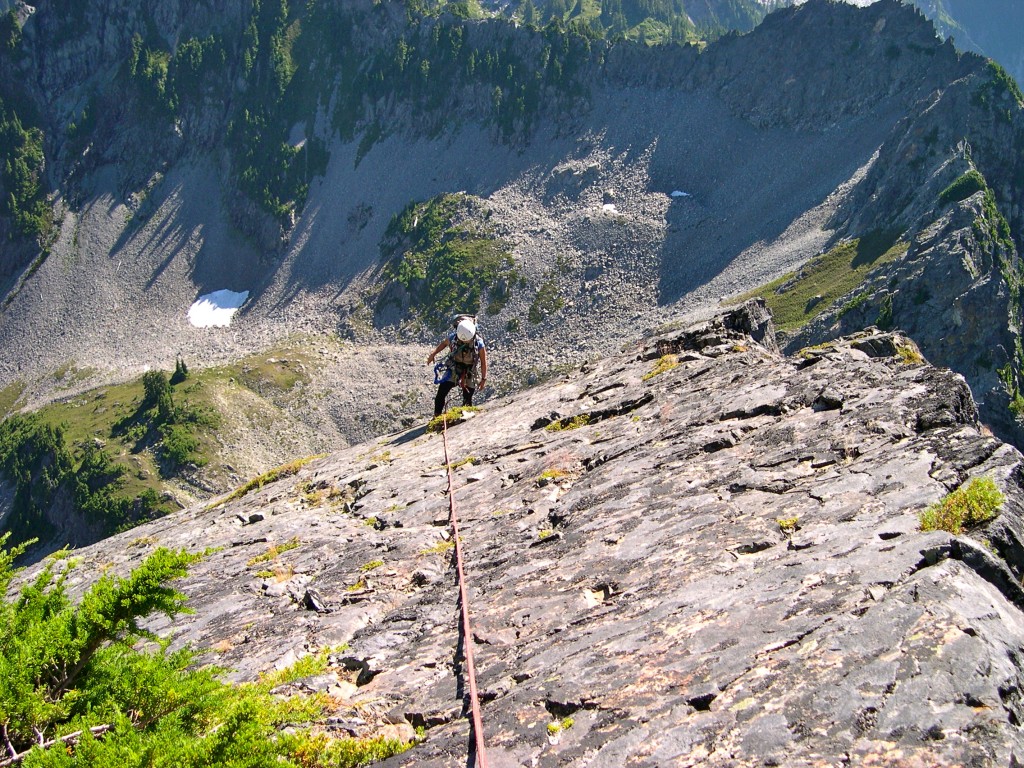 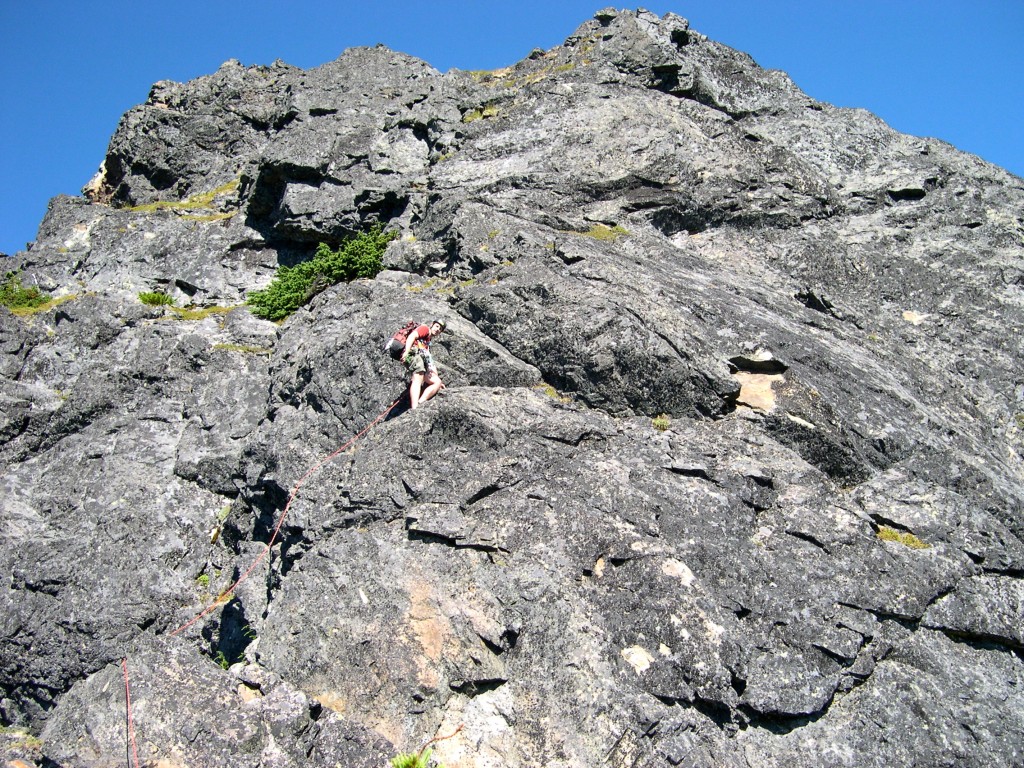 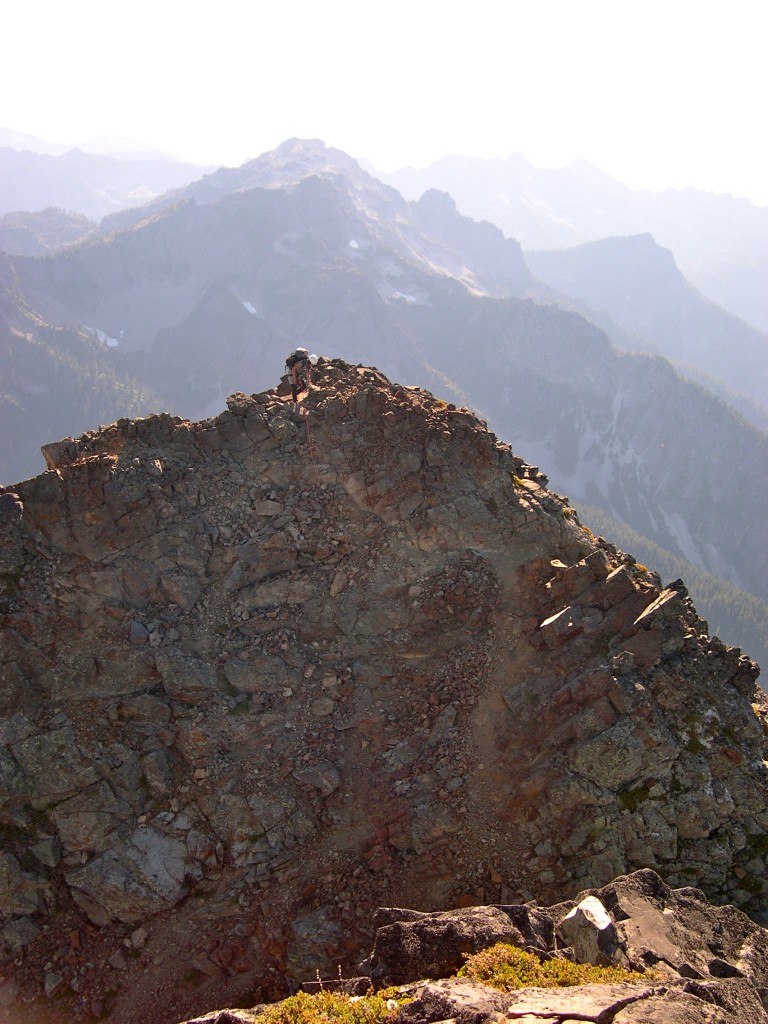 Shirley topping out on the false summit on the West Ridge route. Photo taken from just below the true summit (August 17, 2003). 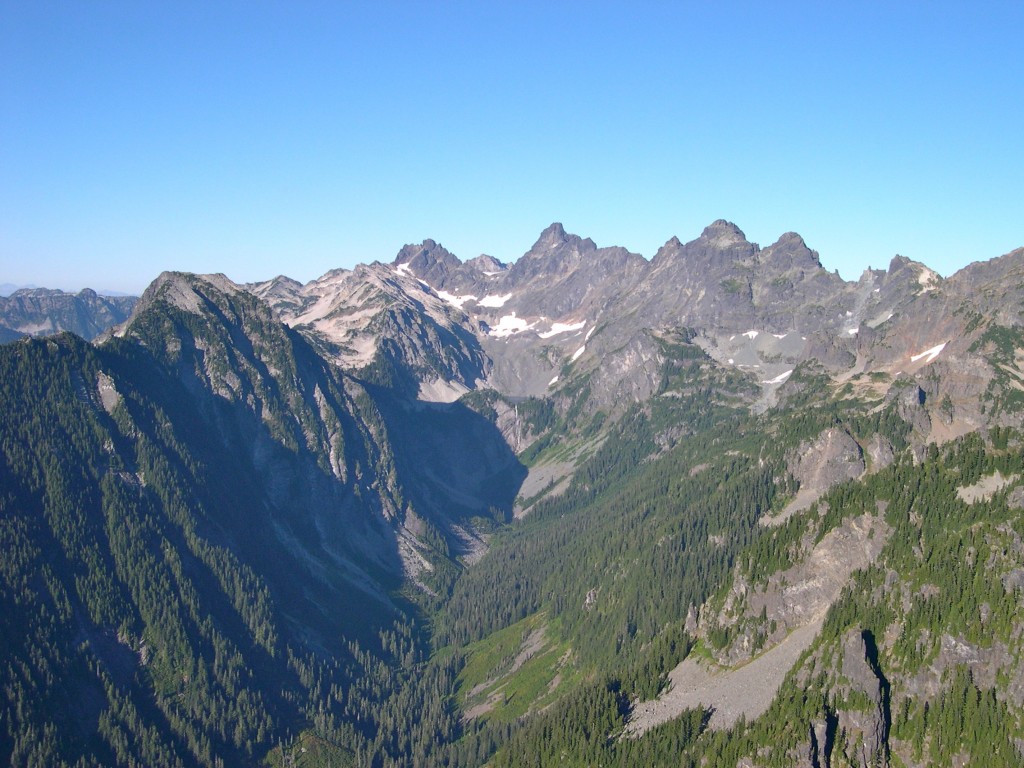 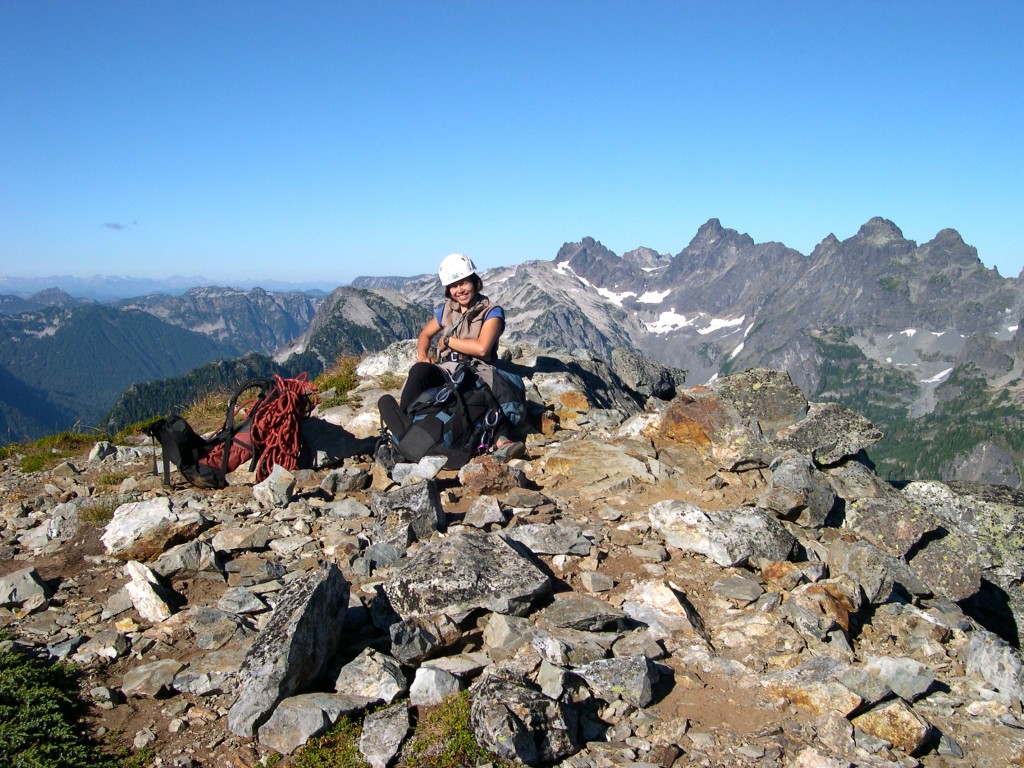 Shirley on the summit of Thomson after climbing the West Ridge route. Looking east from the summit (August 17, 2003). 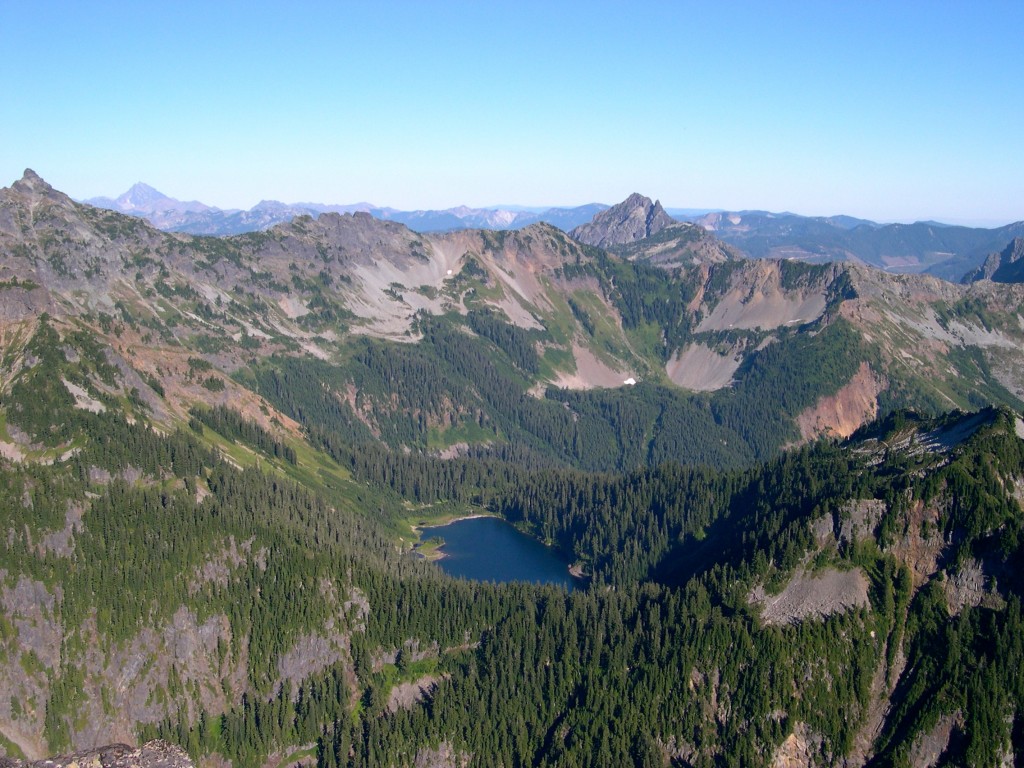 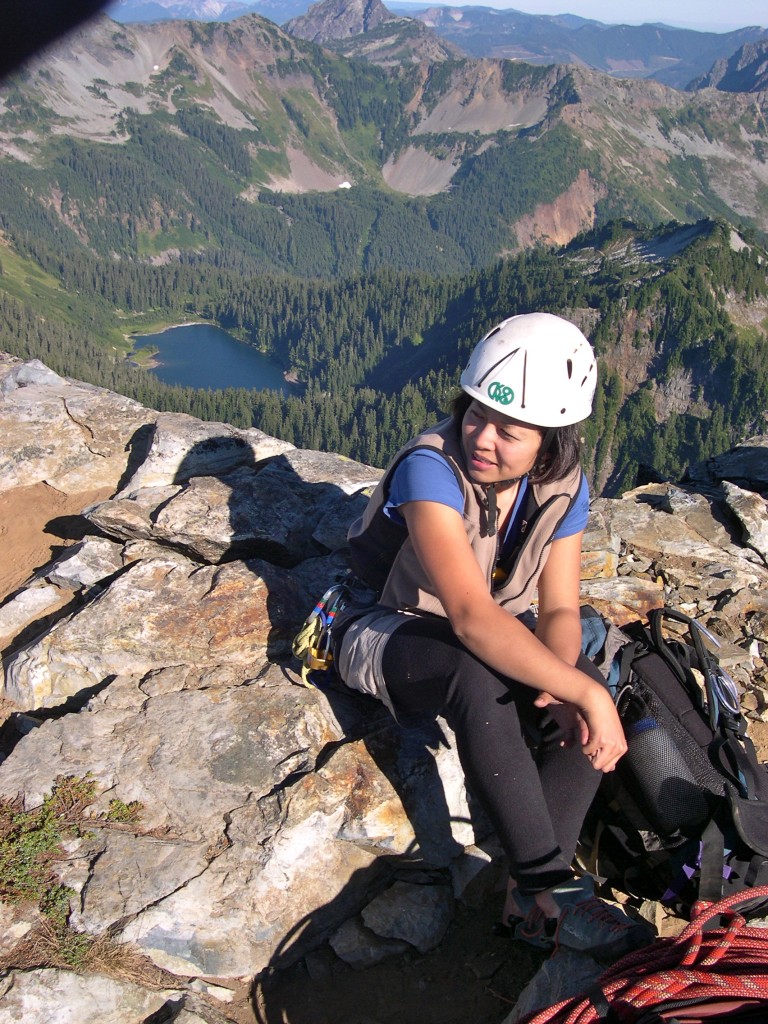 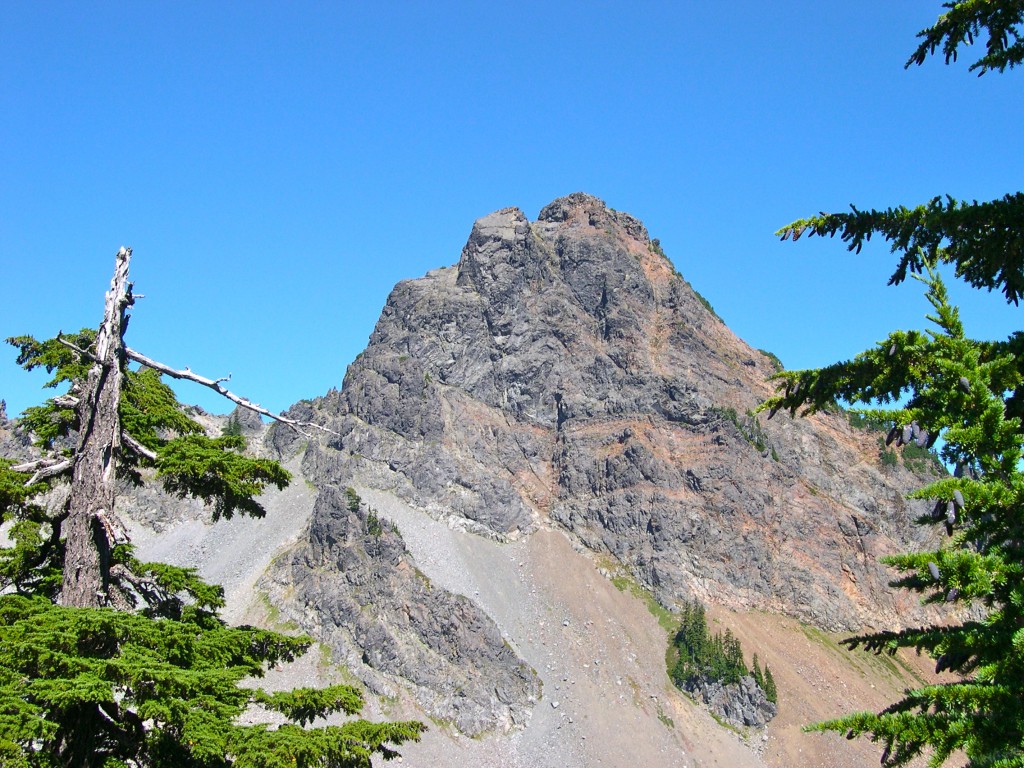 Mount Thomson from Bumblebee Pass. West Ridge is on the left (Aug. 2003).