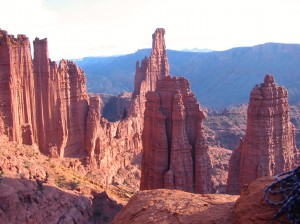 We wake up next morning planning on an aid climb. We head out to the Fishers to find lines fixed two pitches up the Northeast Ridge of Kingfisher. We start up the bolt ladder when the owners arrive. I combine the ladder with the chimney above and hang out at the notch to let these guys pass. They’re BASE jumpers as it turns out. They go first, and we climb behind them. We get to talk a lot with Taylor (BASE jumper) and Brandon (the climber in their midst) at belays. Two parties on a route is slow but we have a good time talking with these guys. Brandon’s done lots of stuff in the Fishers and I milk him for beta. The second pitch (third per guidebooks) is the money pitch – nothing terribly scary but exciting C2 stuff for sure. I wonder what will catch me if that red Alien in a shallow pocket blows. It holds and Shirley backaids all the pitches. The rock is actually pretty clean on this popular line. The next pitch is a long bolt ladder. I decide to bypass the hanging belay below the cap rock roof and link the next pitch. Things are awkward C1 through the roof but the exposure is butt clenching – as I look down, all I see is our dog and packs 400 feet below. 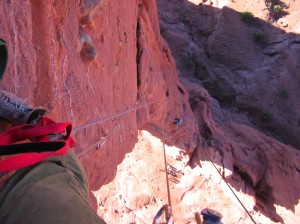 I can’t believe these guys are into jumping this stuff. One reachy move, some manky fixed stuff and I’m on a huge ledge 50 feet shy of the summit. In the meantime more jumpers have started up the fixed ropes on the side of the tower and one by one they begin to arrive. There’s a moment of excitement as one of the fixed lines nearly sews itself on a round shaped but sharp rock. Shirley comes up and I finish the line to the summit via a 5.8 squeeze chimney. We hear the guys leave the sub-summit ledge via the afternoon, downward bound express. The canopies open up with explosive concussions – one after another. By the time we rap back down to the large sub-summit ledge, we’re by ourselves rigging the double rope raps in the dark. But wait, three hundred feet below we pick up another jumper who did not make the top before darkness. He raps with us and we hike out together. We watch their helmet cam video of the jump (crazy shit!) and drink beers. Later over pizza, the guys suggest that we try their rope jump tomorrow – a Dan Osman style 180-foot dive on a climbing rope suspended on a Tyrolean line. We best leave town first thing in the morning – especially since there’s snow storms reported in the PNW (yeah that’s it!). 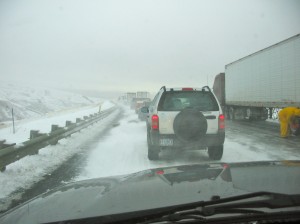 The pass on I84 in Oregon just east of Pendleton on the way home.

Wake up late. Depressed. One last drive through Arches for future stoke & we head home. Somewhere in the middle of nowhere, Idaho a car goes bouncing off the guard rails at 85 mph and we nearly slam into him….as do the next several cars. It’s a dark, moonless night and it takes us and other witnesses a few minutes to stop the oncoming traffic. Cops arrive and we depart. Get stuck in a blizzard in eastern Oregon for hours. Get home. I pulled my stitches out already with a feeling of nostalgia and started daydreaming about the next desert outing. 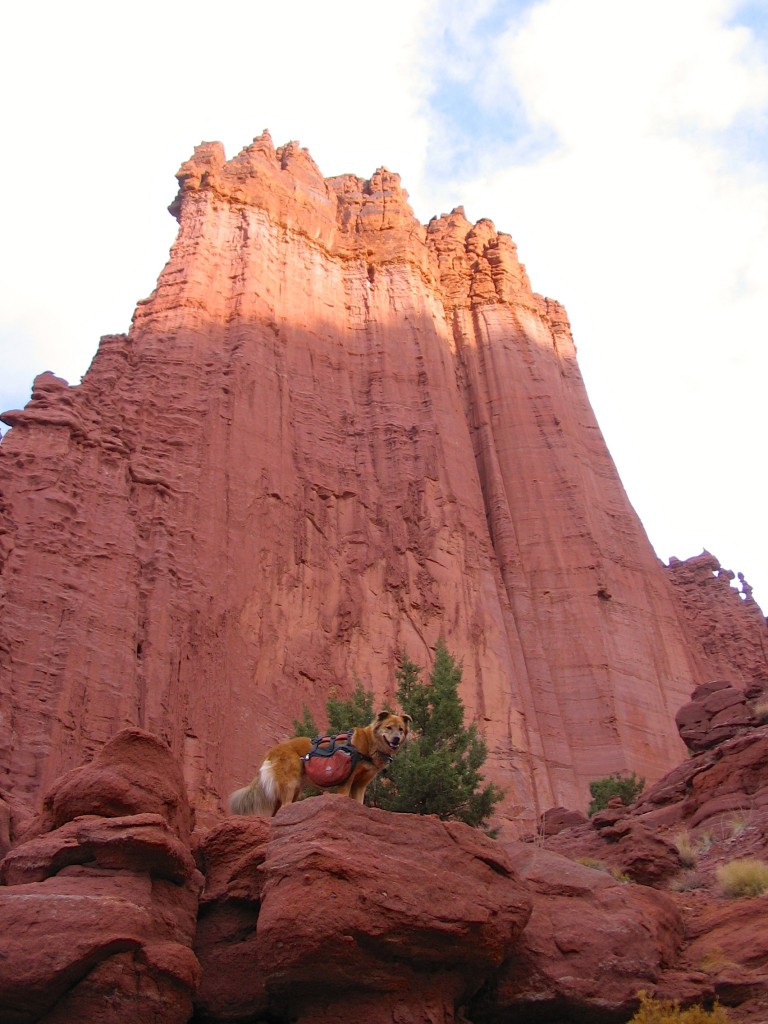 Kingfisher’s east face and Blondie on approach to Northeast Ridge route (just beyond the right skyline). Death Of American Democracy tackles this face directly up to the summit (Nov. 24, 2006). 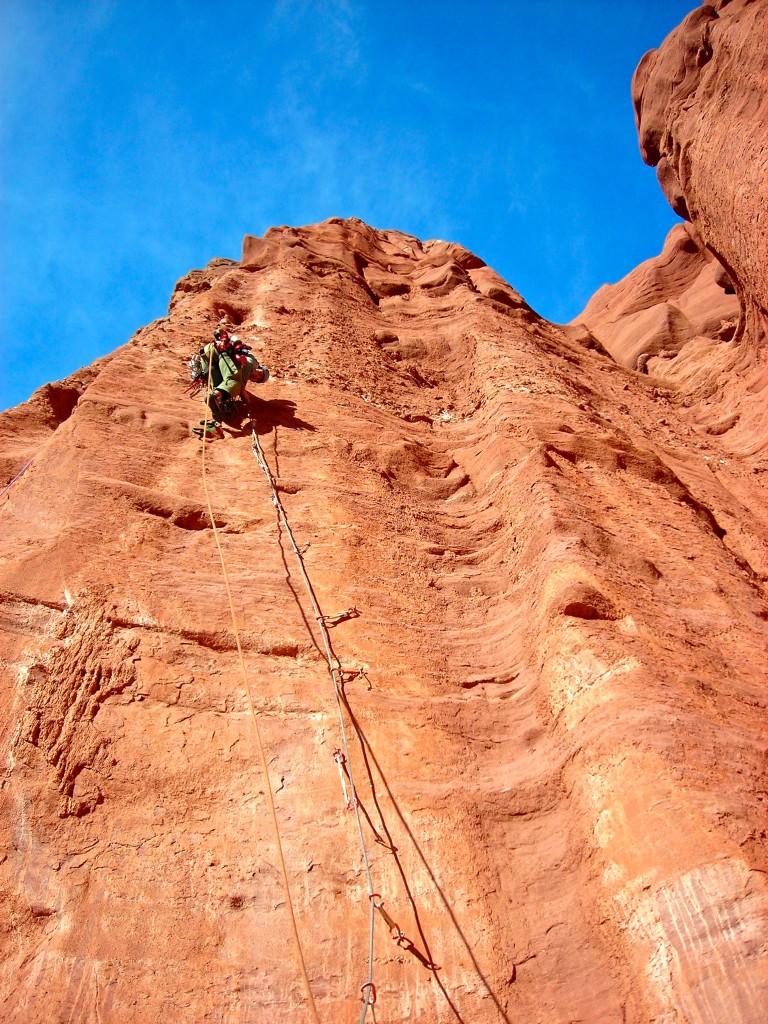 Leading the A0 pitch 1 of Northeast Ridge of Kingfisher. Mostly new hardware and pretty much all of it seemed solid (Nov. 24, 2006). 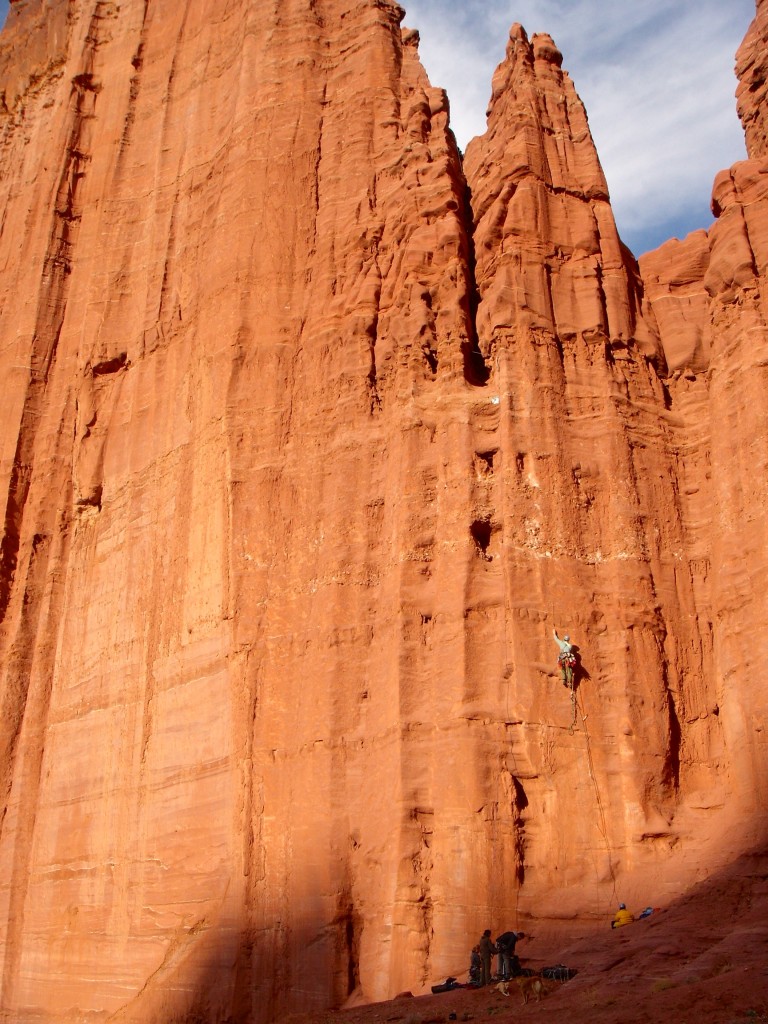 Yours truly leading the bolt ladder on pitch 1 of Northeast Ridge belayed by Shirley (yellow jacket). Three other folks are getting ready to jug their fixed lines from day before. Also visible our and their mutts. Chimney of pitch 2 (we combined with P1) is visible above as well. Photo taken November 24, 2006. 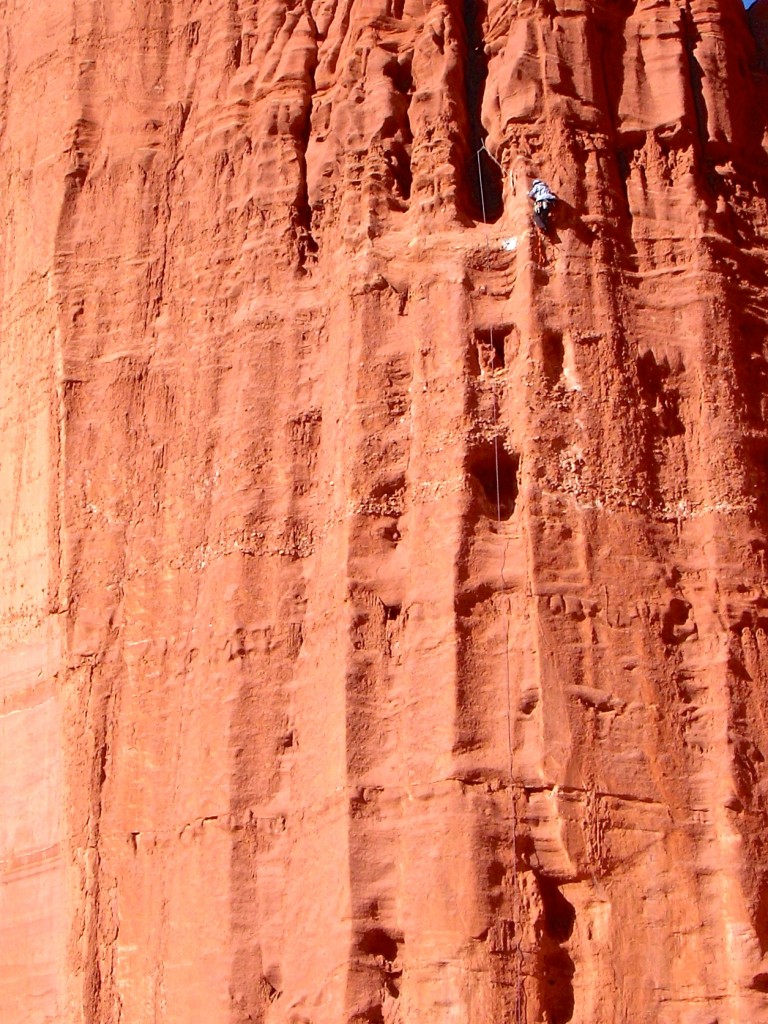 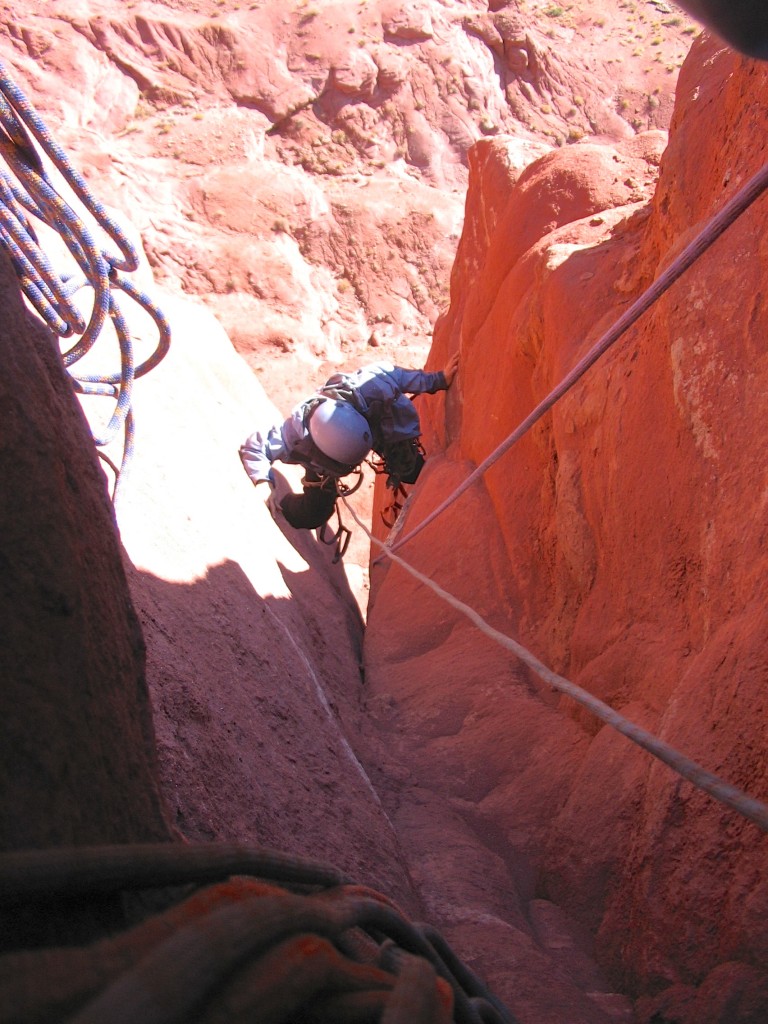 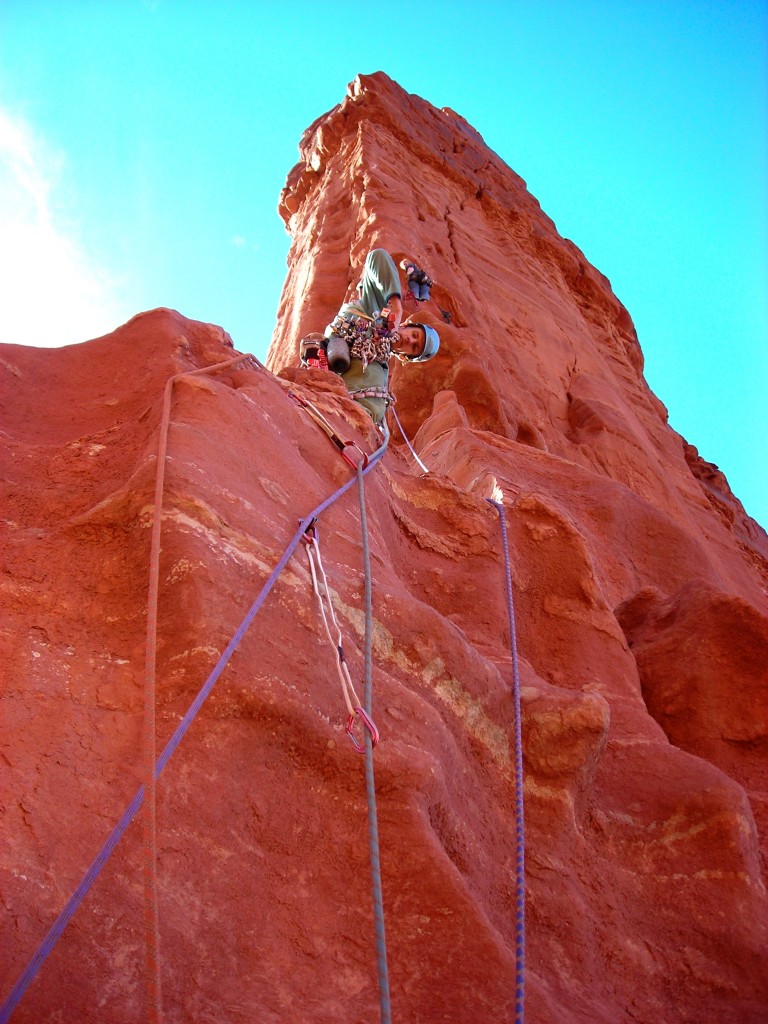 Beginning the lead of the third pitch of Northeast Ridge on Kingfisher. The party ahead of us was fixing ropes – lots of ropes to navigate around for everyone. Good times though (Nov. 24, 2006). 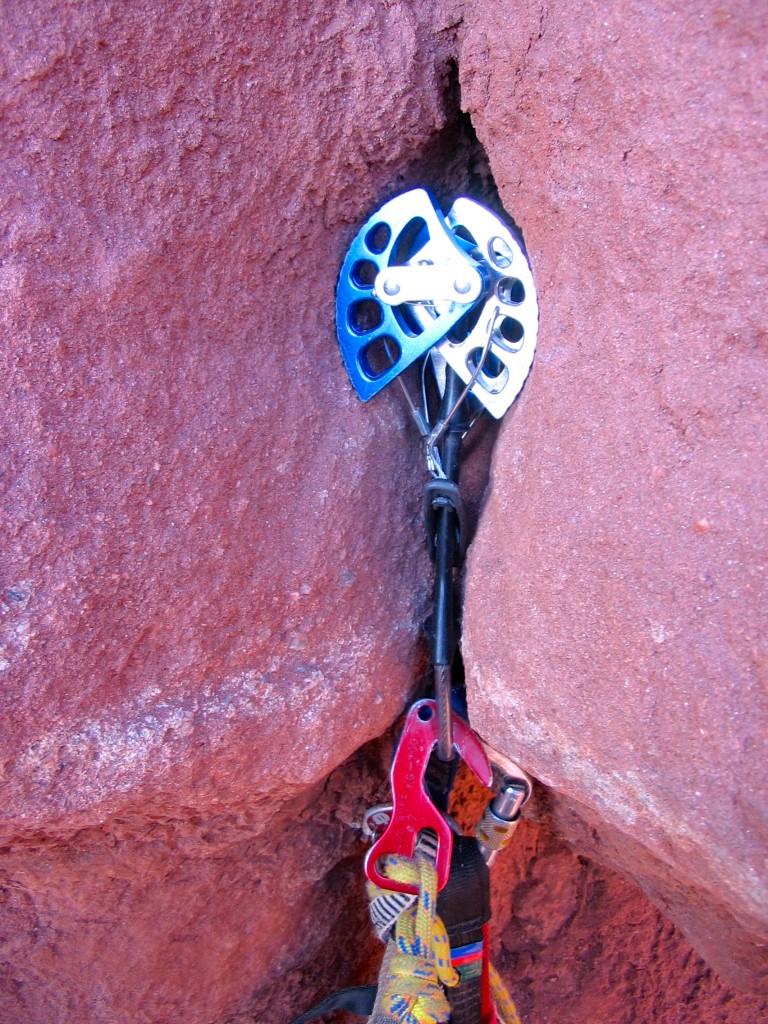 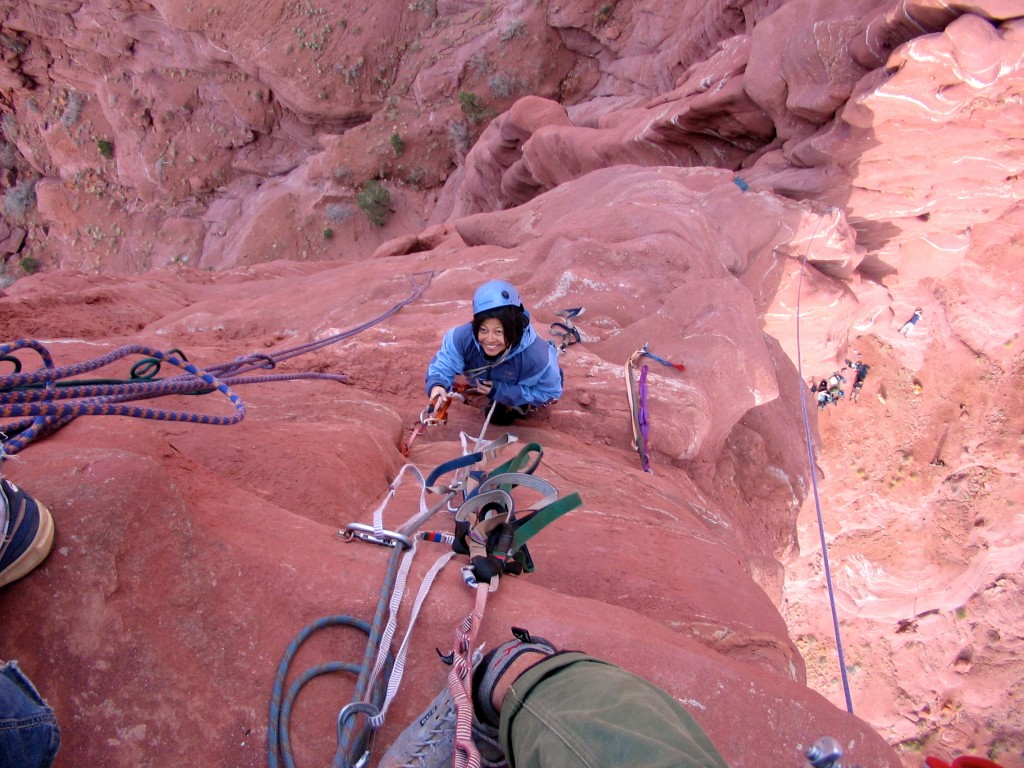 Shirley approaching the top of the third (our 2nd) pitch of Northeast Ridge. This is the crux C2 pitch of the line – ledgy nature & relative low angle make it twice as important not to blow things (Nov. 24, 2006). 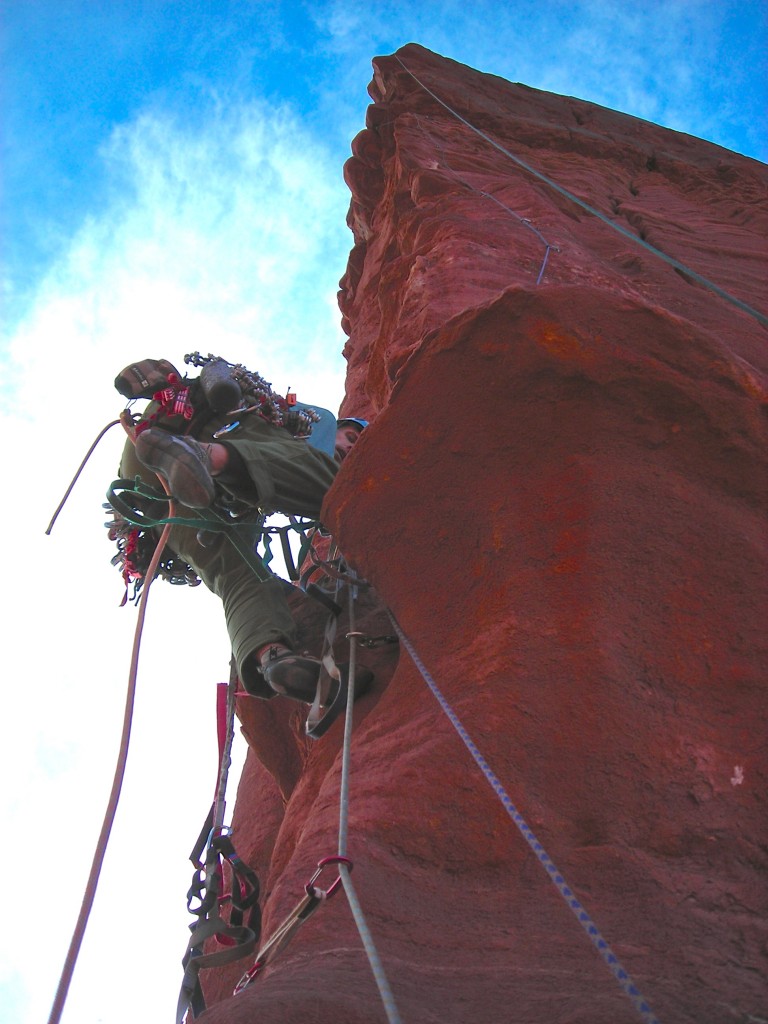 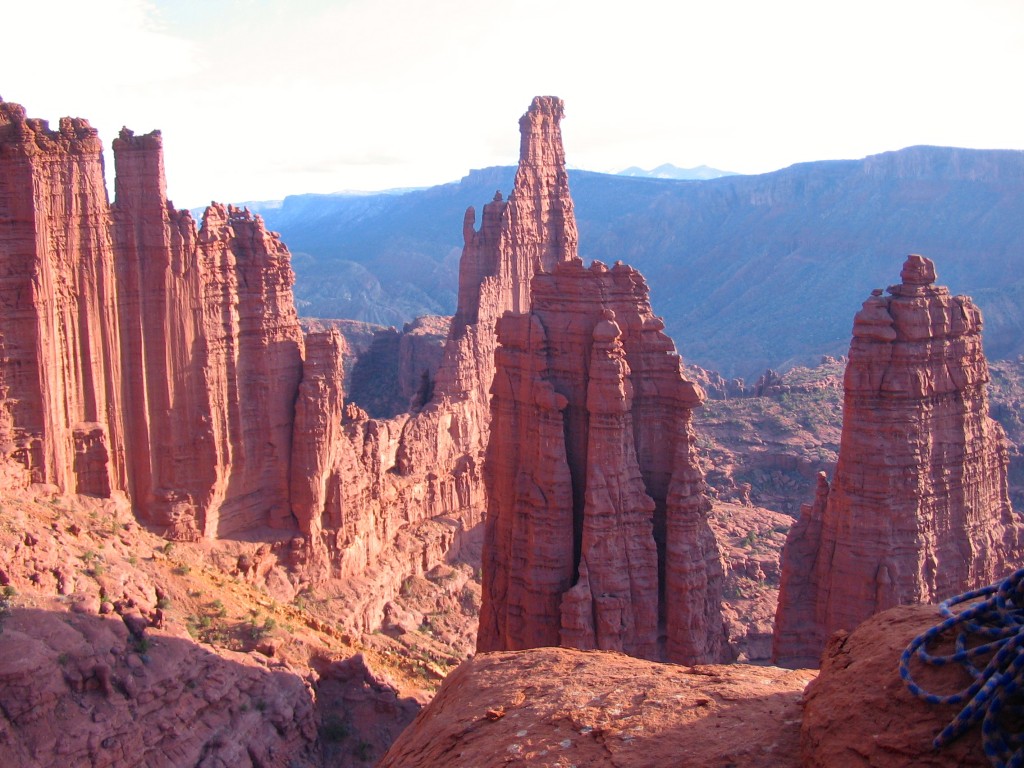 Four of the six main formations of the Fishers as seen from the Northeast Ridge route on Kingfisher: The Oracle (leftmost) and Titan (back row) followed by the Echo Tower (front, center) and Cottontail Tower (Nov. 2006). 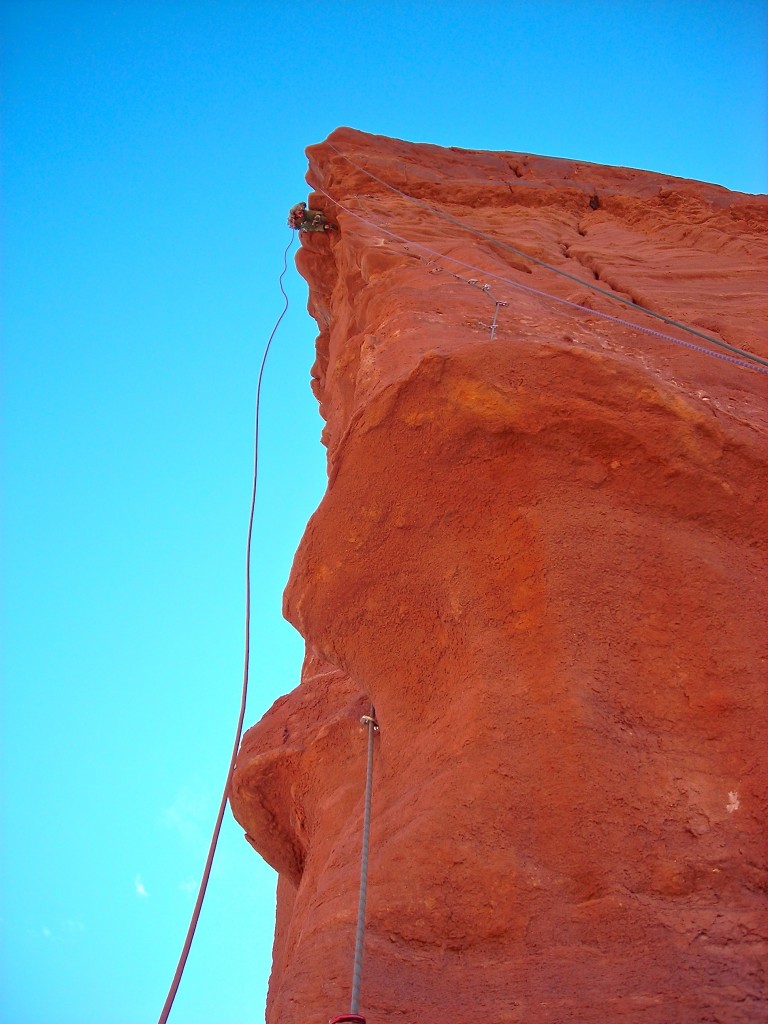 Wide angle view of the roof through the Moenkopi layer that crowns the top of Kingfisher. Aid is (reachy) C1 but position is spectacular. Northeast Ridge pitch 5 (Nov. 24, 2006). 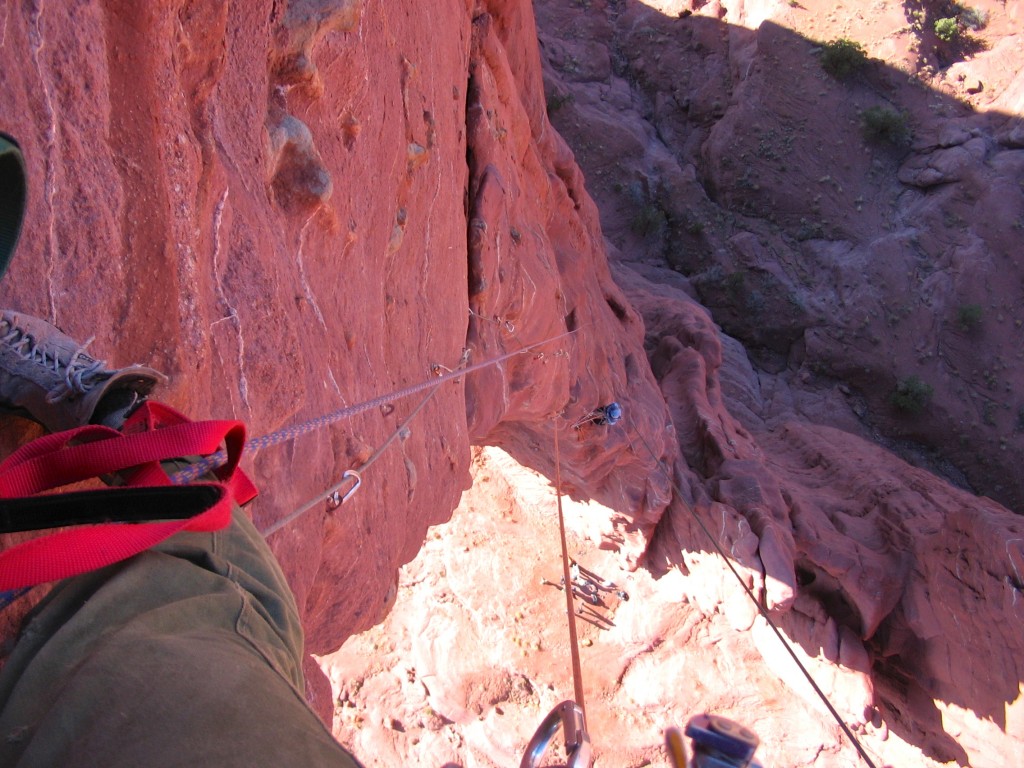 Looking down from the lead of the long bolt ladder on P4 (our P3) of Northeast Ridge. Shirley is at belay and a crowd of BASE jumpers are at the base of the route (as is our dog Blondie; Nov. 24, 2006). 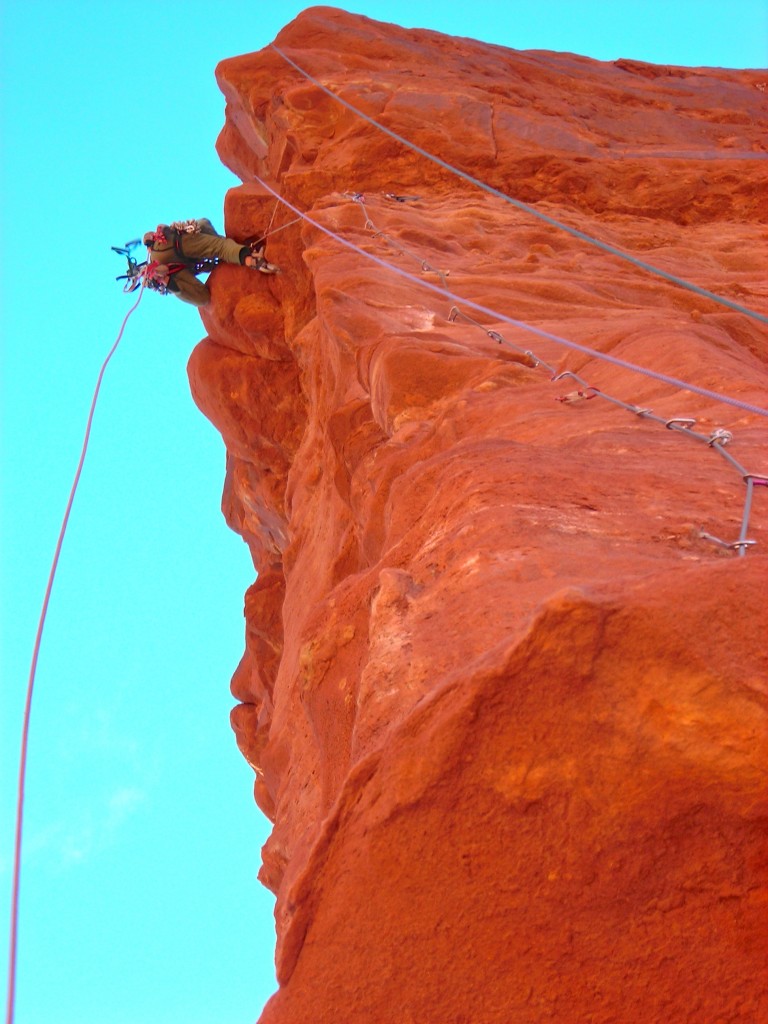 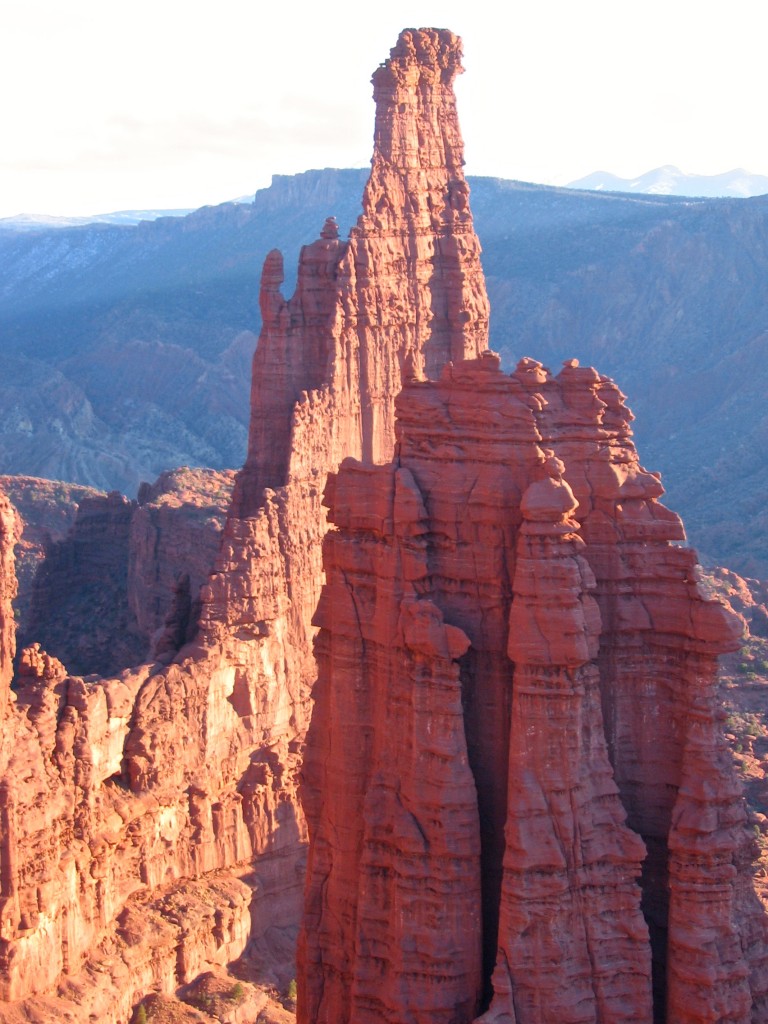 The Titan is in the background. Note the characteristic formations on it: The Finger Of Fate gendarme and The Duck. In the foreground is Echo Tower (summit). The cracks on the left of this formation are probably the upper pitches of Phantom Sprint (IV 5.9 C3-). The dark V-shaped chimney is the North Chimney line via which FA of the tower went (factoid to be checked). View seen from top of P5 of NE Ridge on Kingfisher (Nov. 24, 2006). 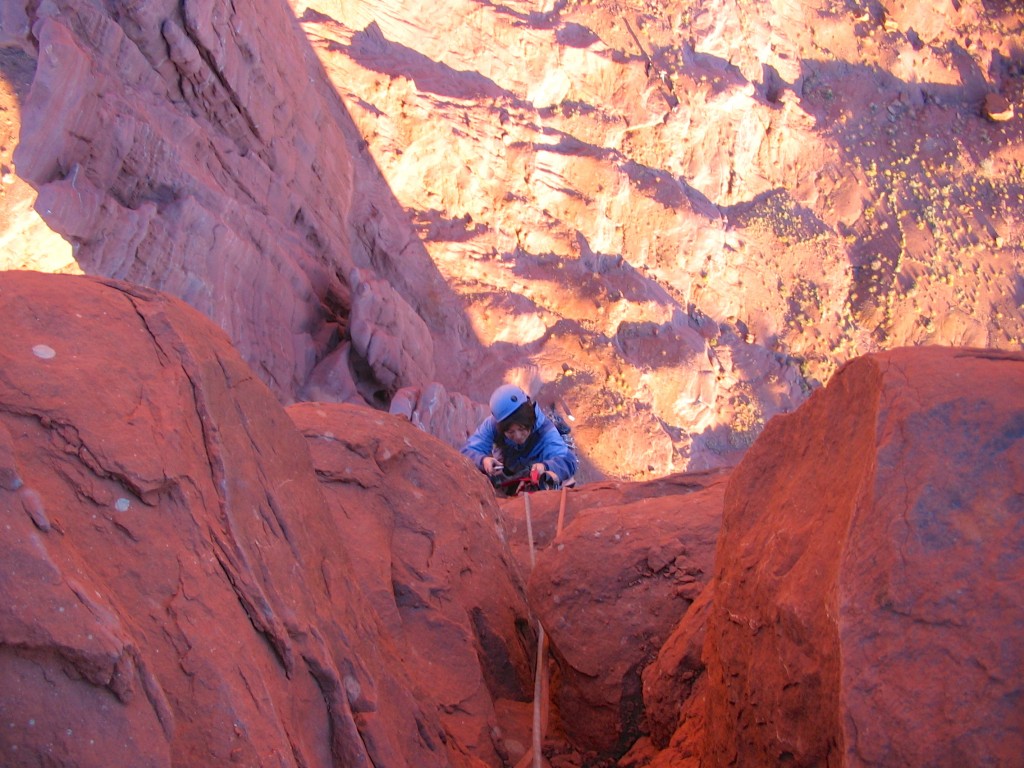 Shirley approaching the top of the 5th pitch (our 3rd) on Kingfisher’s Northeast Ridge line. A person and a dog are visible below at base (Nov. 24, 2006). 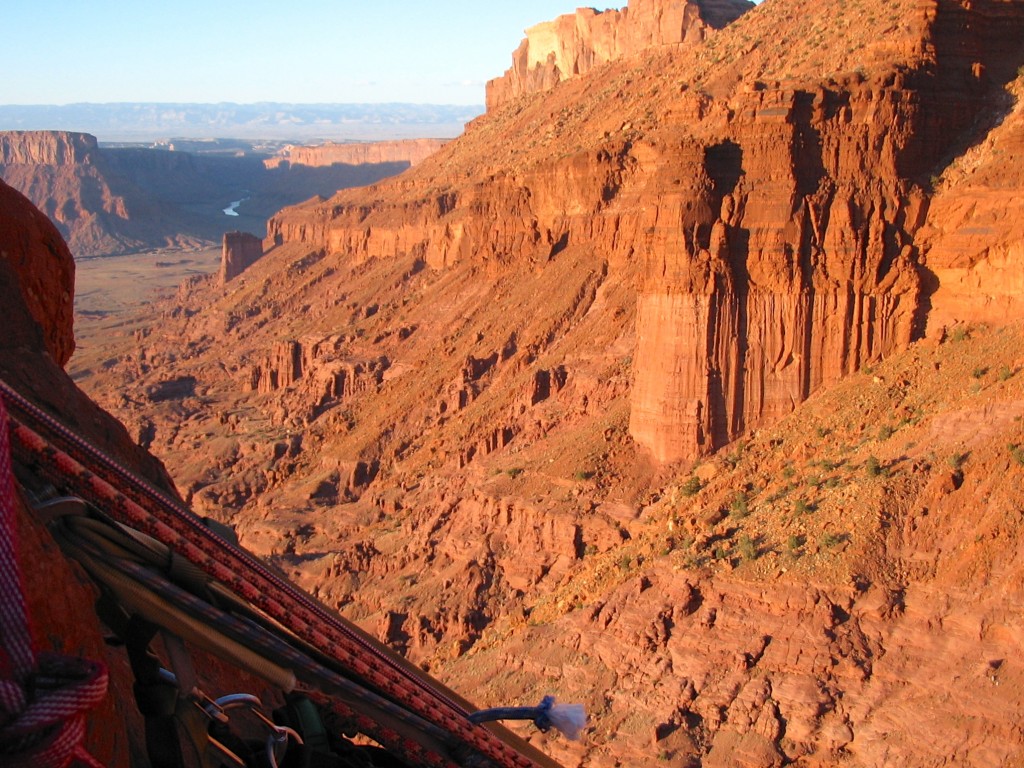 Looking roughly north from the top of the 5th pitch on Northeast Ridge. Forming Tower is in foreground (not yet a tower but part of the ridge) and River Tower is further back. Colorado River is in background (Nov. 24, 2006). 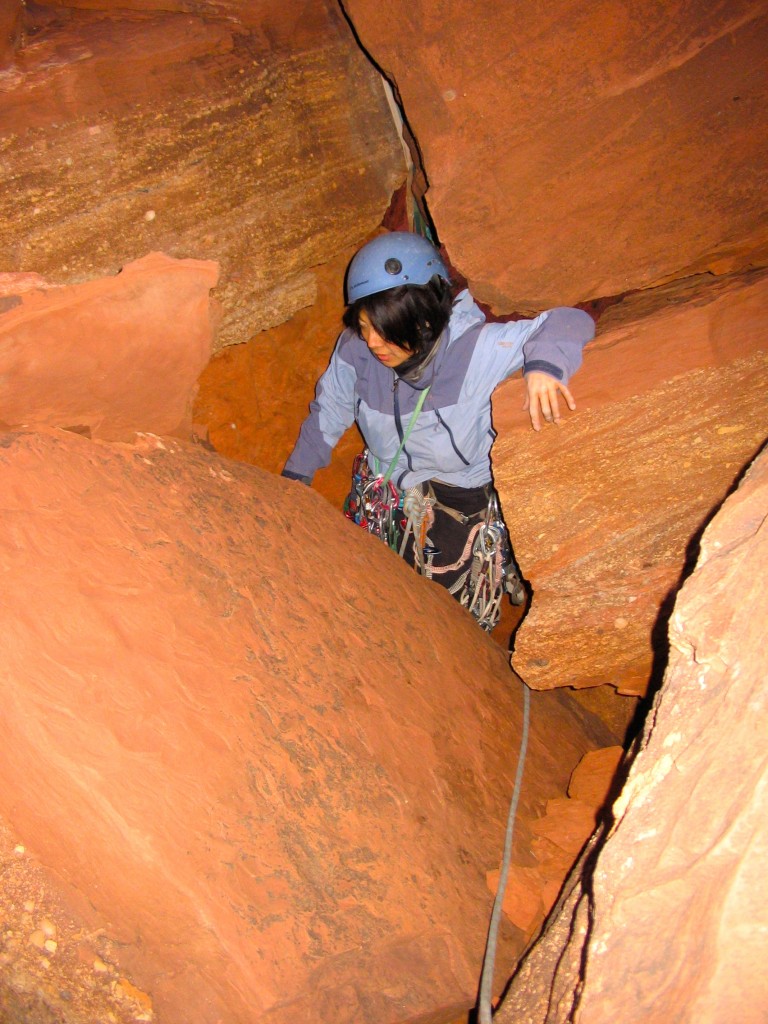 Shirley topping out on the final 5.8 chimney on the Northeast Ridge of Kingfisher Tower (Nov. 2006). 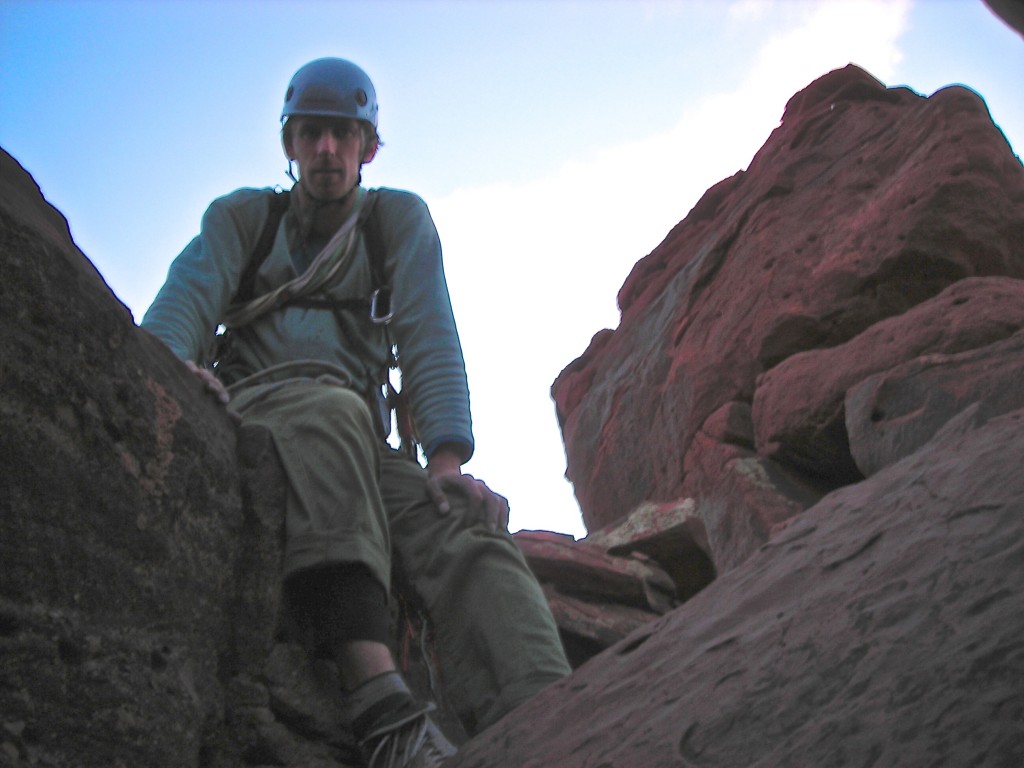 Summit ridge of Kingfisher in the fading daylight. On the night time rappel, we’d pick up a stranded base jumper (stranded on his way up..not down). 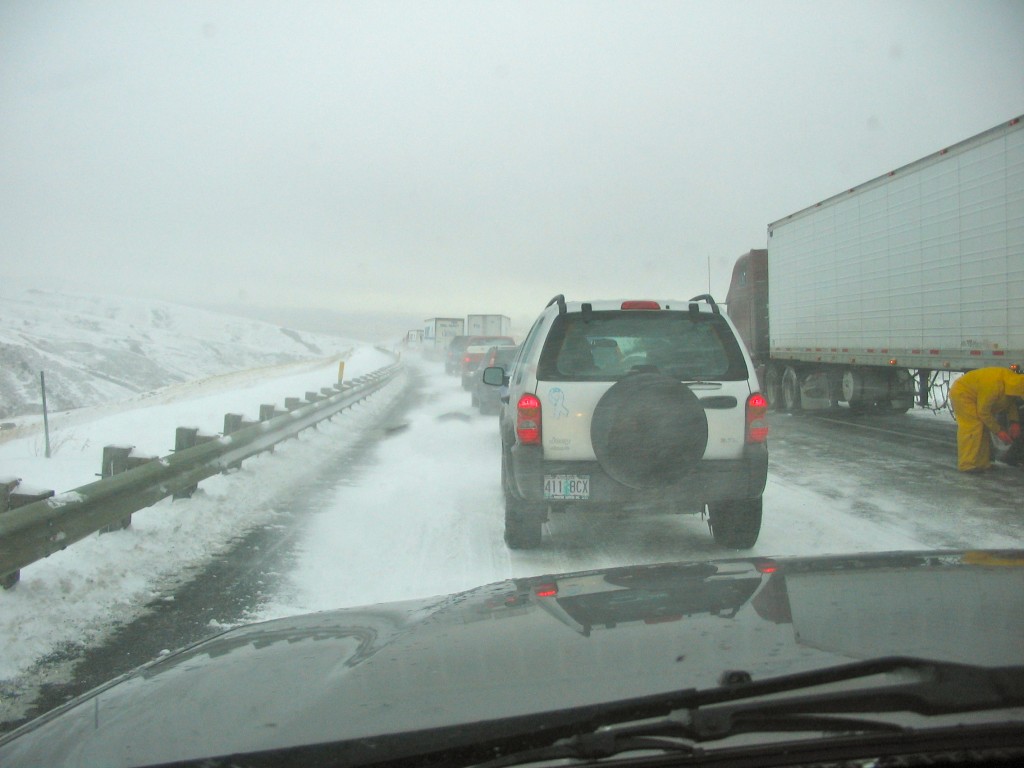 Typical drive home from the deserts. This is the pass on I84 in Oregon just east of Pendleton (November 2006).

Go back to Moab Mix.