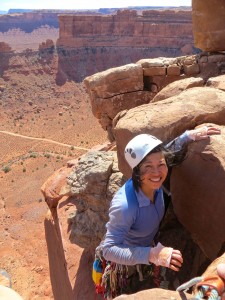 Happy Shirley arriving on the summit of Eagle Plume.

Late Friday night arrival in Salt Lake City is followed up by a 3 hour drive to Green River. Early morning wake up and…rain! 20% chance of precip apparently means steady rain and thick clouds in all directions. No longer in a rush, we make the short drive to Moab and enjoy a leisurely breakfast. We doubt that climbing is on the menu for the day. We scan forecasts for surrounding areas and see that Mexican Hat to the south is showing sunshine! Three hours later we’re in the Valley Of The Gods racking up for the handsome looking Eagle Plume Tower – arguably the centerpiece of The Valley. We’ve been here 7 years ago but did (almost) no climbing. The area has that middle of nowhere feel (maybe because it is) and breathtaking views of a rolling, red desert dotted with mid-sized sandstone towers. Eagle Plume’s South Face route (III, 5.10) is one of the few reasonable free routes (no aid gear with us). A 6-foot section of a black/blue Alien crack on pitch 2 is the crux and the topmost two pitches probably tie for the funnest climbing of the day despite the obvious patch of soft rock – careful, don’t go shearing off the slopers now. We both have a great time on this 4-pitch gem. Quick, friendly raps and we’re eating Mex food in Moab (used to be good – not sure what happened to it) while pondering the plans for our short Sunday: go with big or go with a surer bet…We try the former and end up enjoying a nice road trip through the Beehive State… 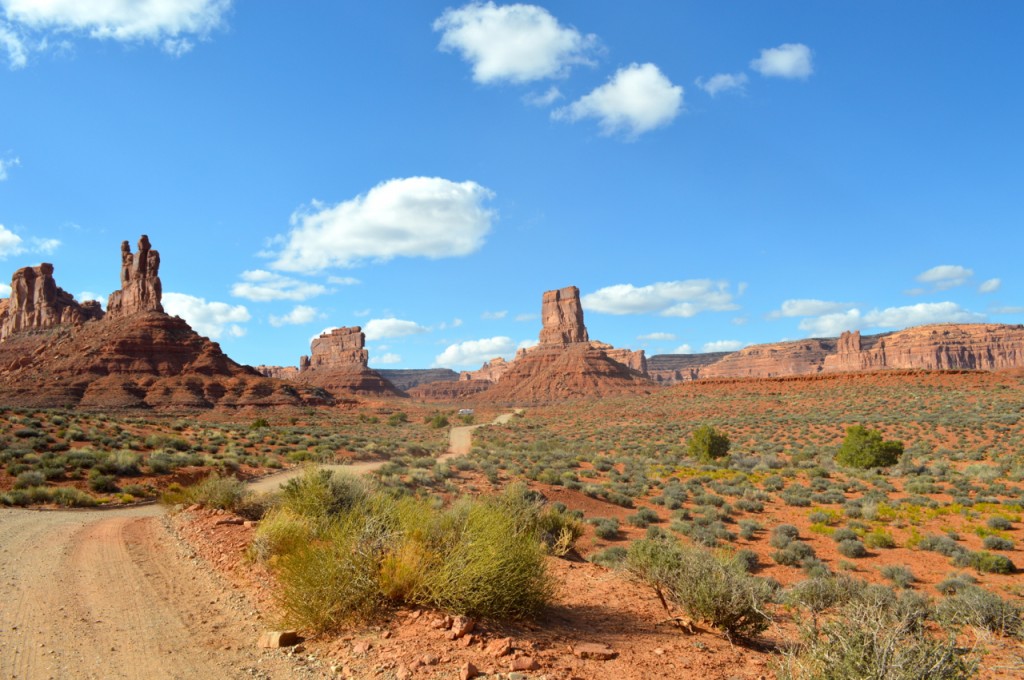 Valley Of The Gods. Eagle Plume Tower is the obvious one just right of center. The twin-summit formation on the left is The Puttermans (Putterman In A Bathtub is on the left and Putterman On The Thrown is on the right; Apr. 2013). 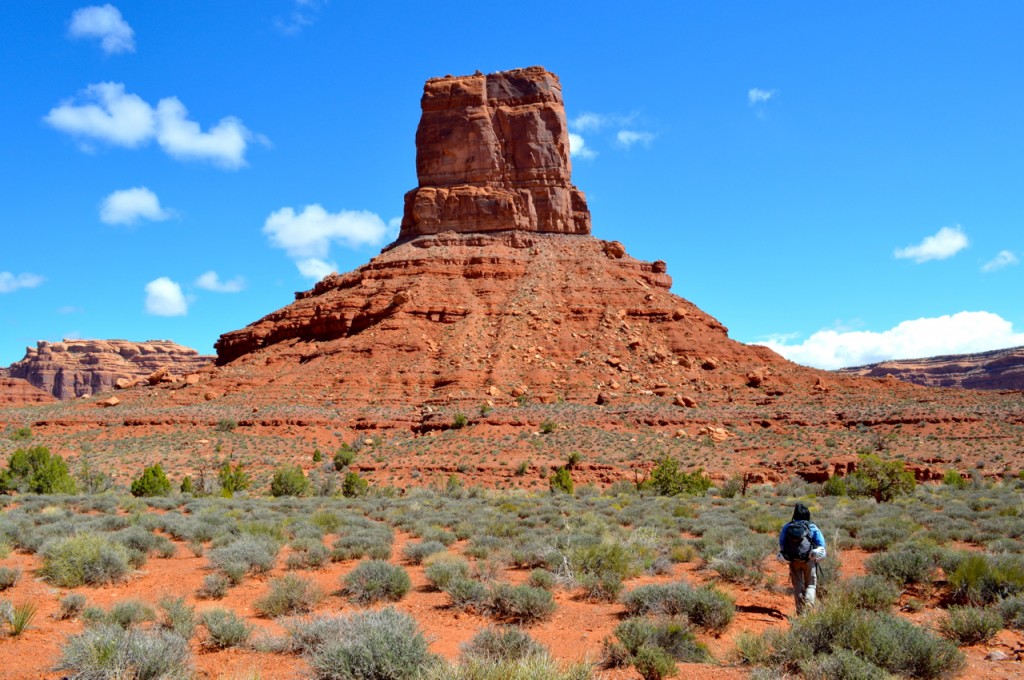 Shirley on the short, lunch-hour approach to the base of the south face of Eagle Plume Tower . The obvious right-facing dihedral is the South Face route (4 pitch, 5.10; Apr. 2013). 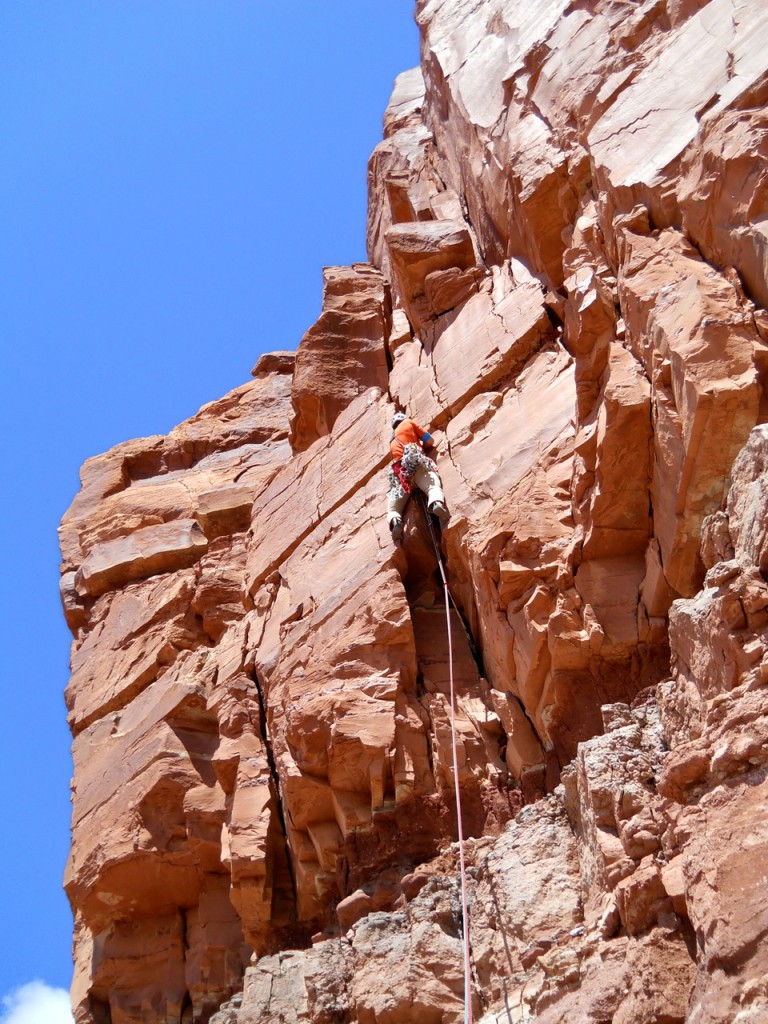 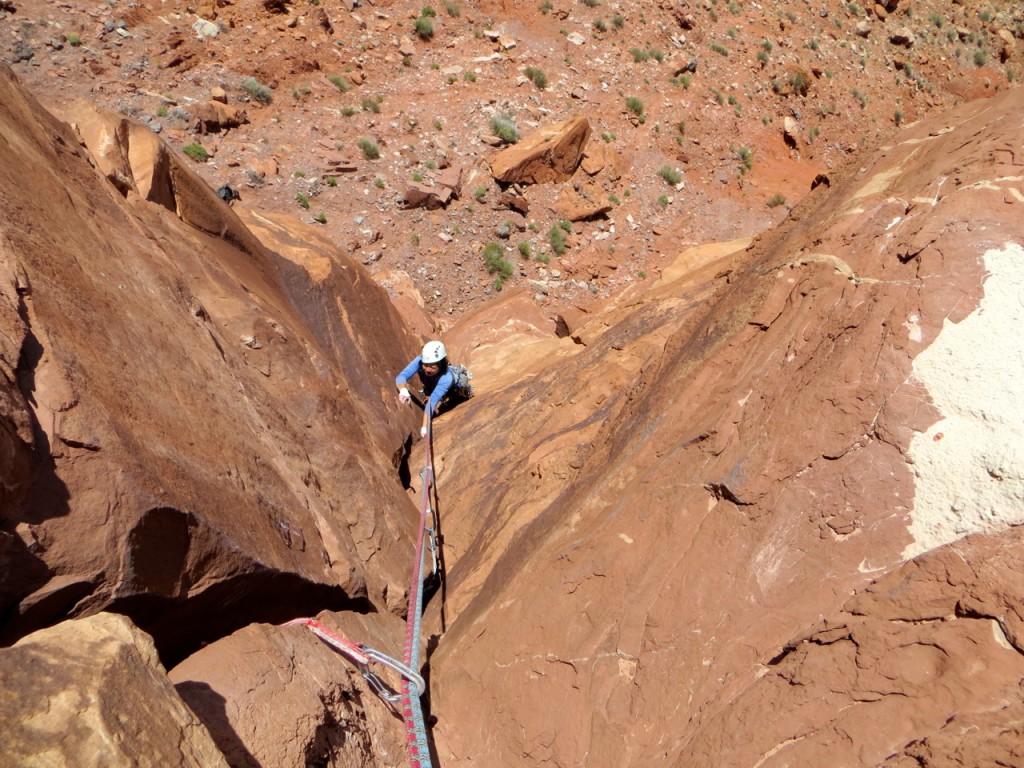 Shirley nearing the top of the first pitch of the South Face route – a ledgy 5.8 with this here short, wide finishing crack (Apr. 2013). 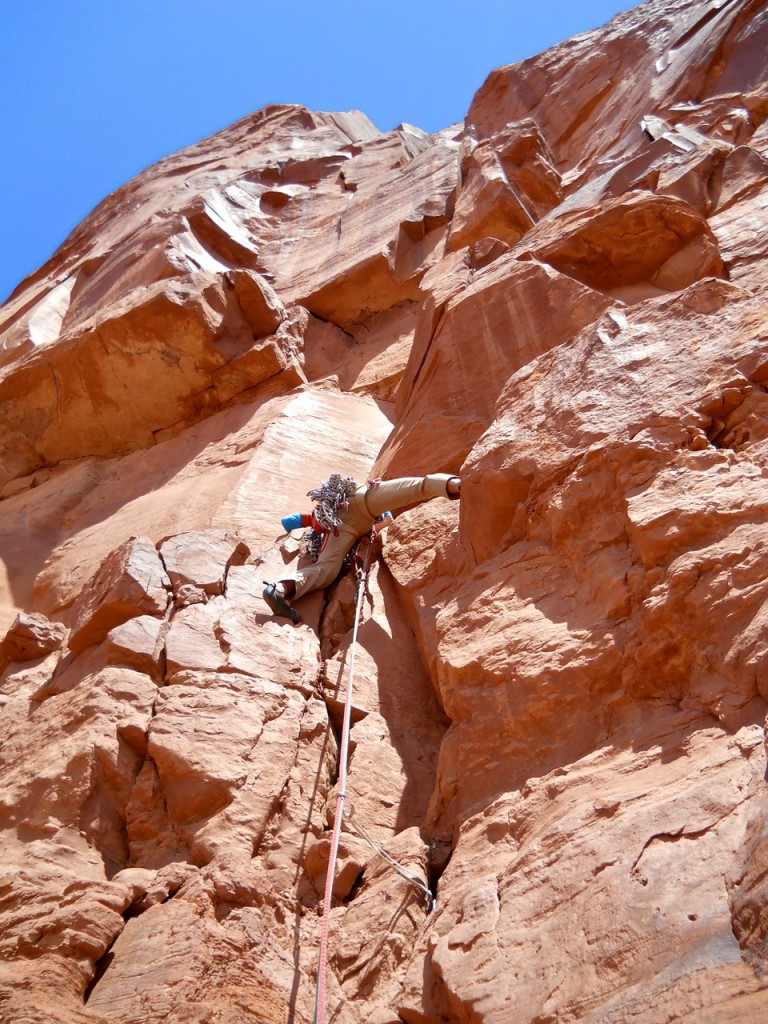 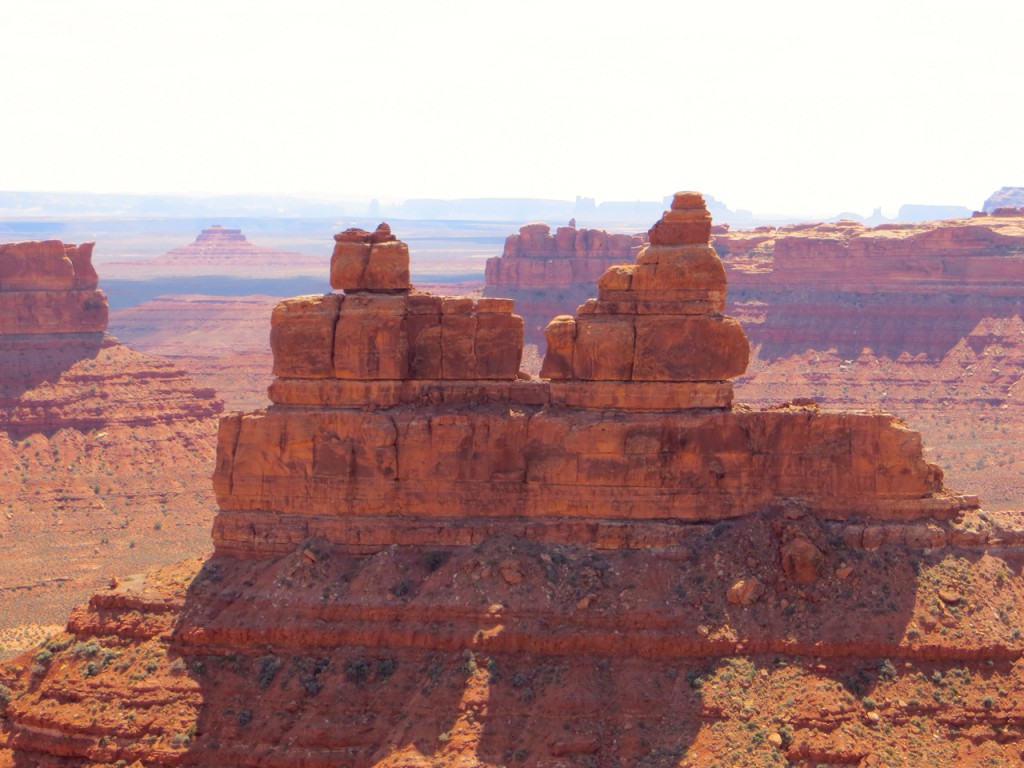 Ah the Puttermans from high on Eagle Plume. Putterman In A Bathtub is on the left and Putterman On The Thrown is on the right. Views beyond perhaps reach Monument Valley but I’m not sure (Apr. 2013). 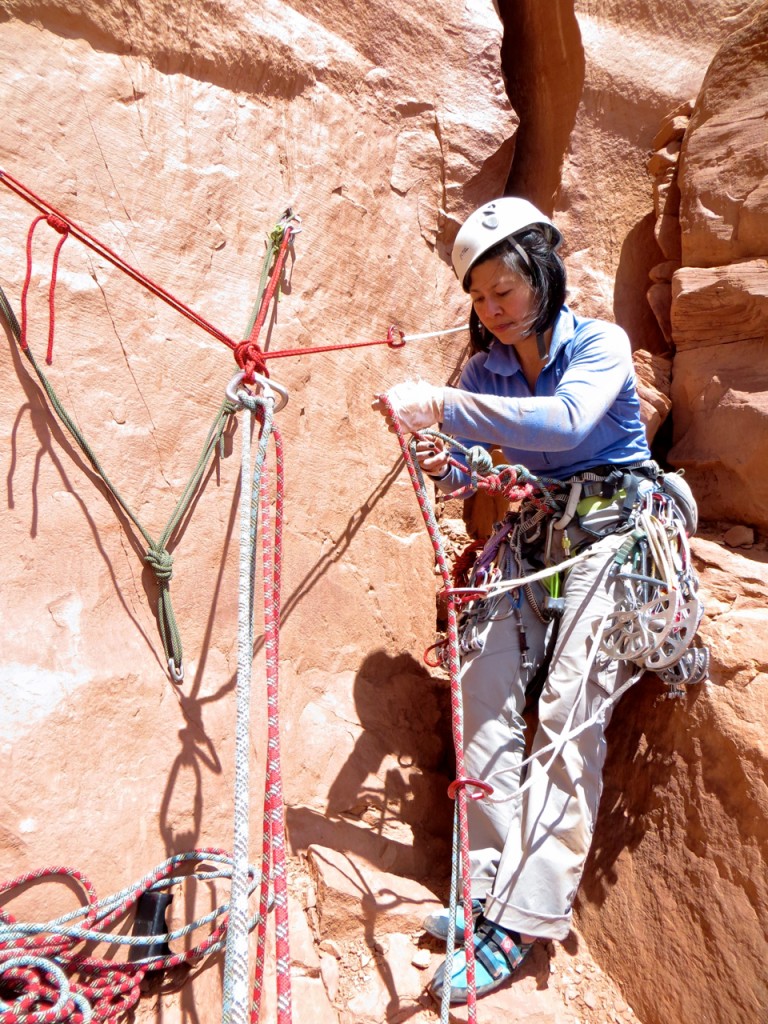 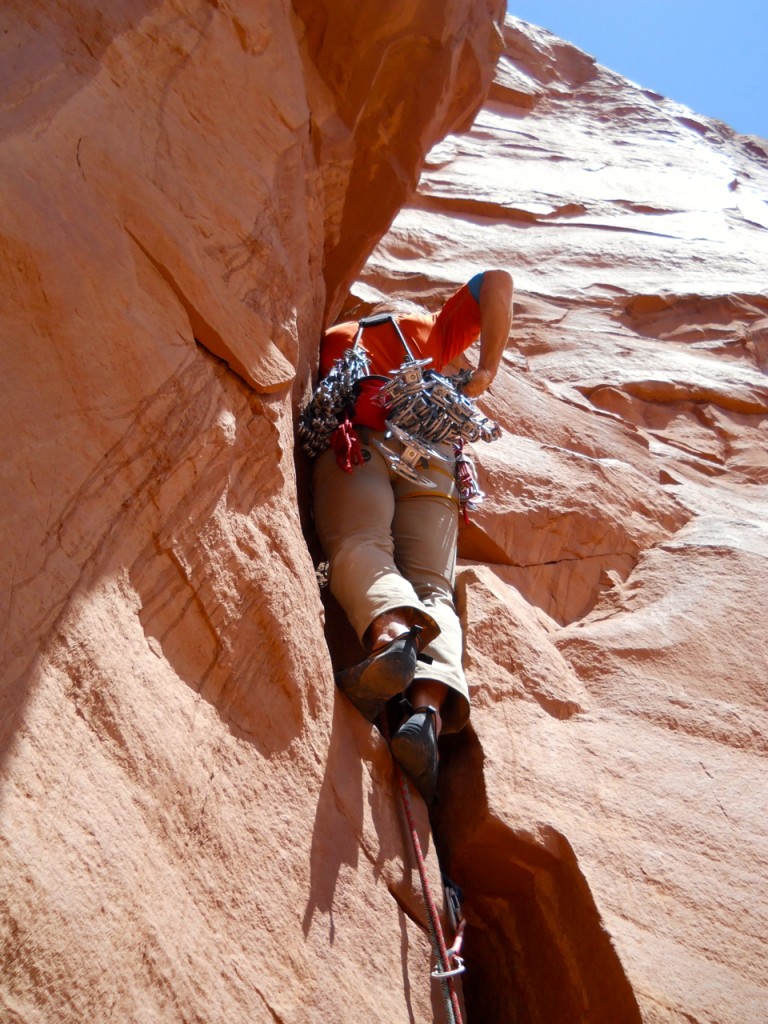 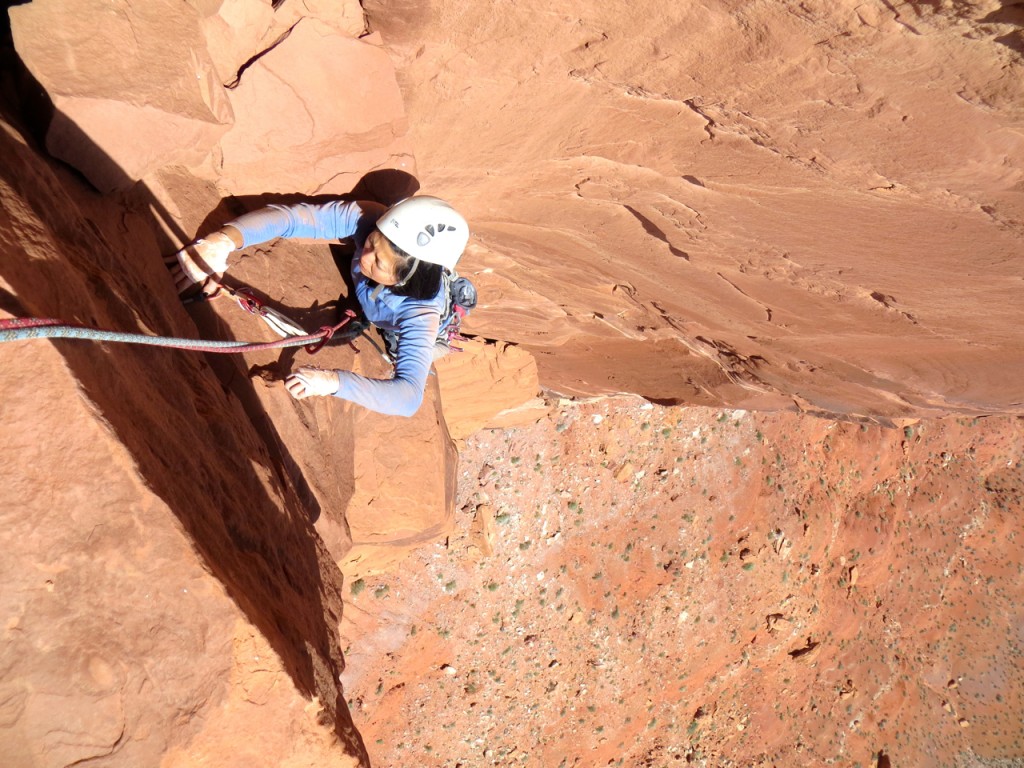 Dusty Shirley topping out on pitch 2.5 – we used the intermediate belay on the third pitch having read about the chossy bedding seam section above in Brad’s TR…this way Shirley could hear my weeping more clearly (Apr. 2013). 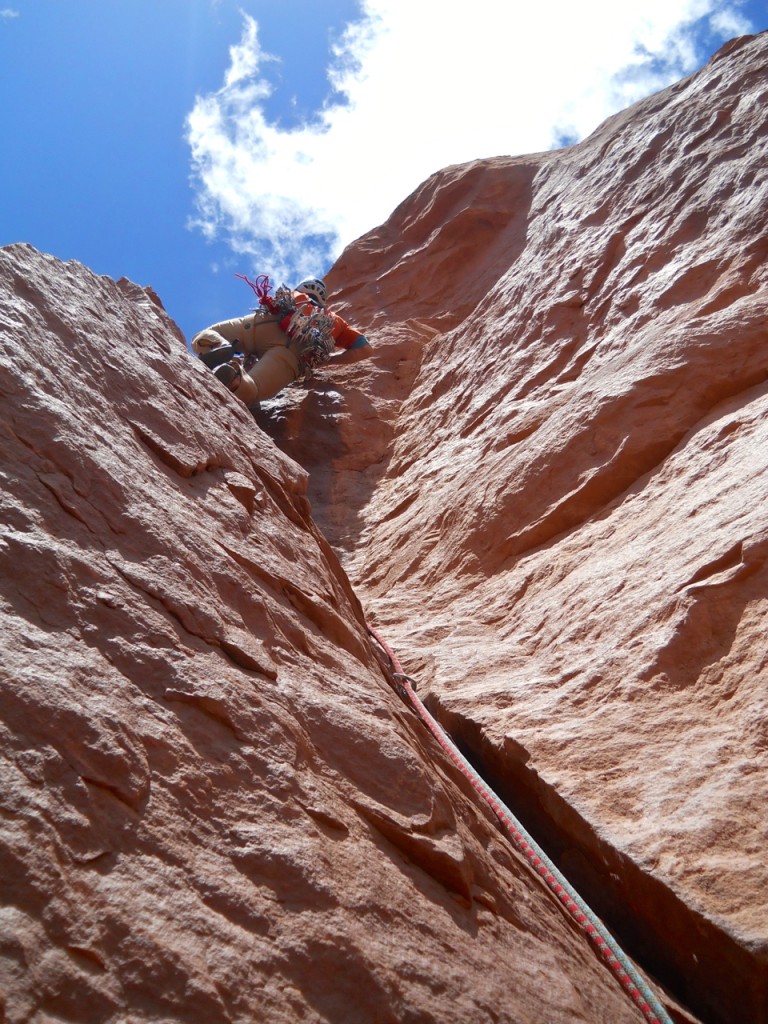 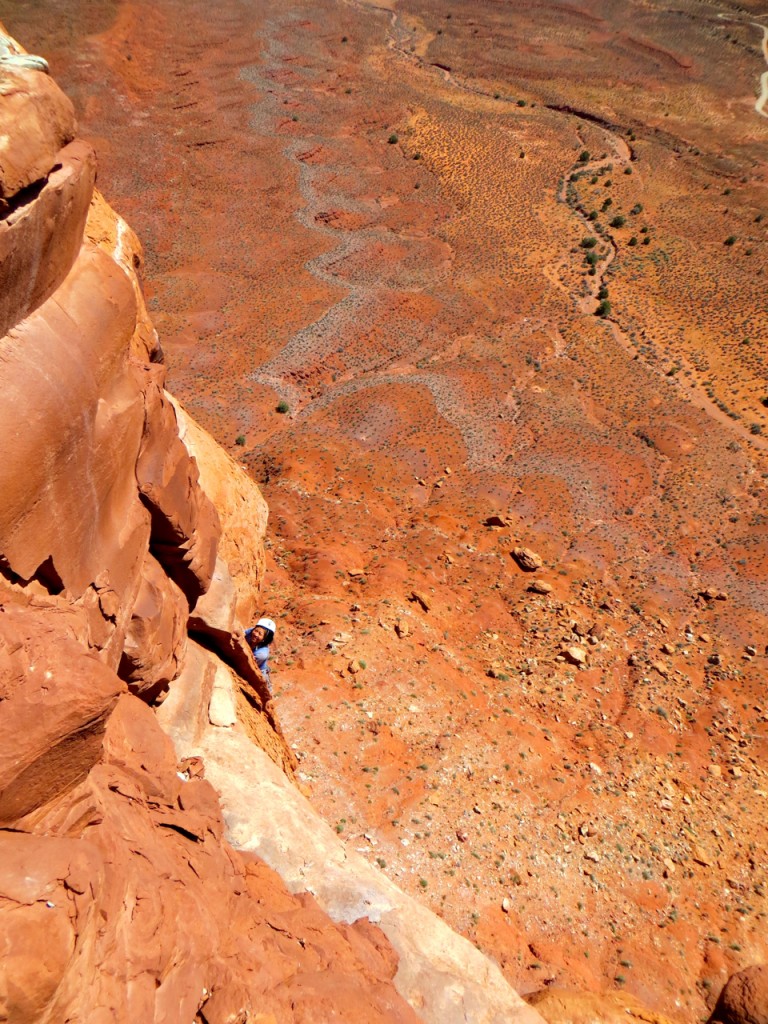 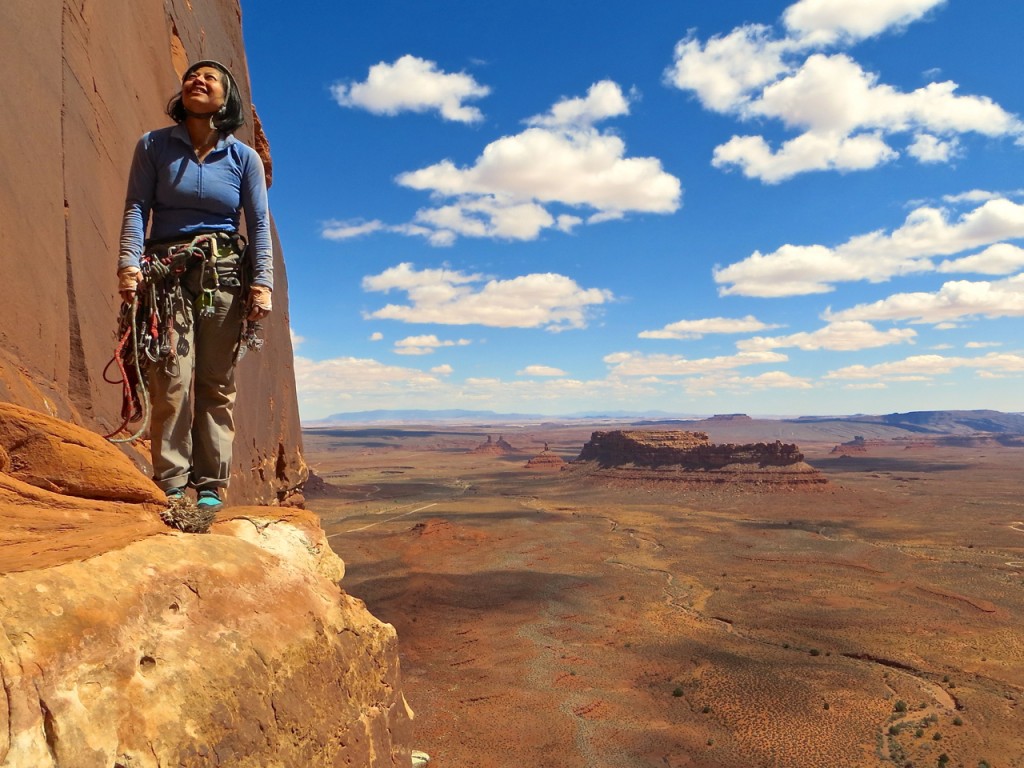 Shirley arriving at the base of the finishing (very nice!) dihedral on the South Face route of Eagle Plume. In the background (left to right) are Petard Tower , The Anvil and The Sitting Hen (the labeling comes from Brad’s TR on his www.piquaclimber.com website; Apr. 2013). 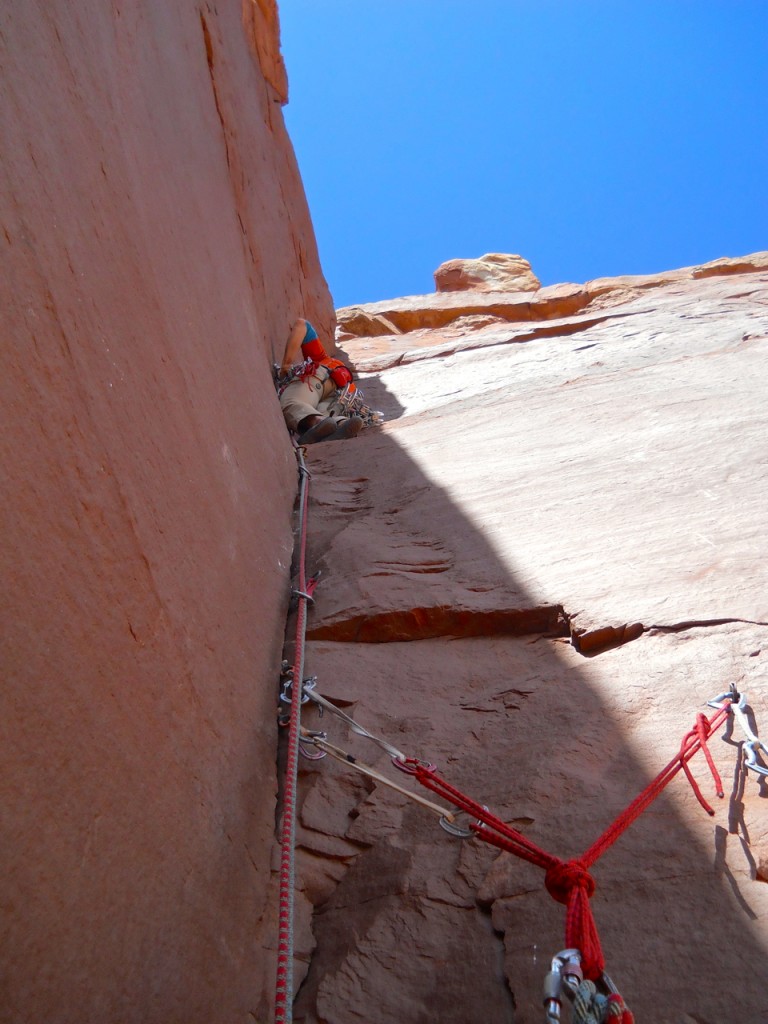 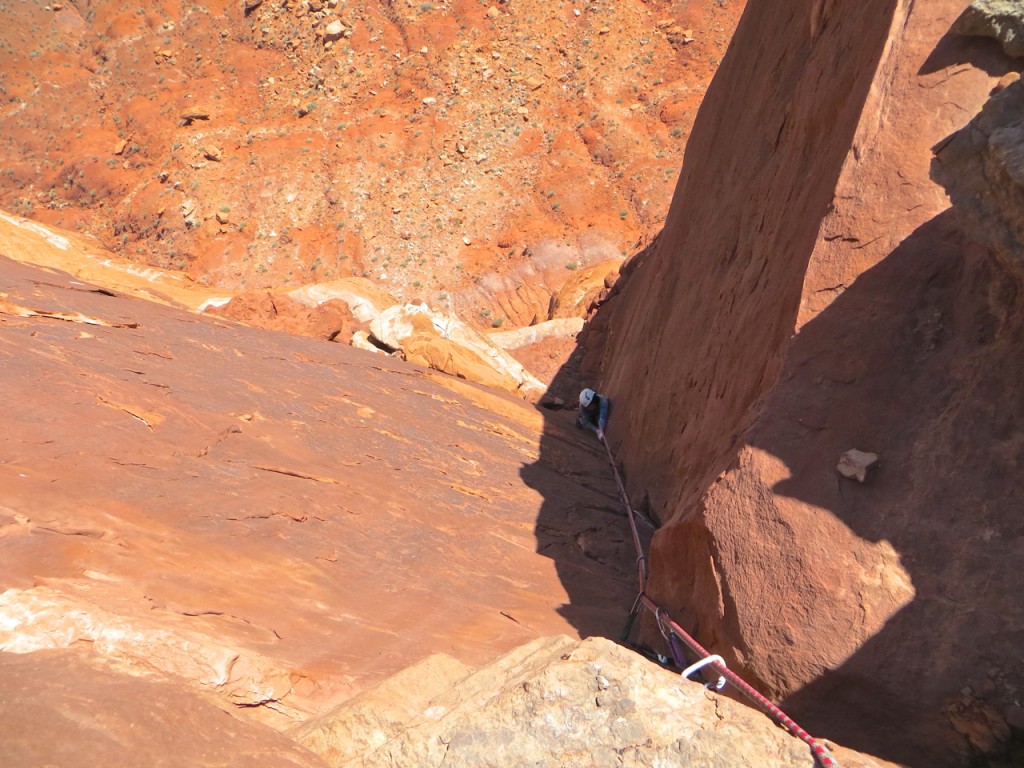 The very nice 5.9 finishing dihedral on Eagle Plume…don’t know why I plugged away all that gear at the top as the moves were nothing harder than the rest of the pitch below …perhaps I’m retarded (Apr. 2013). 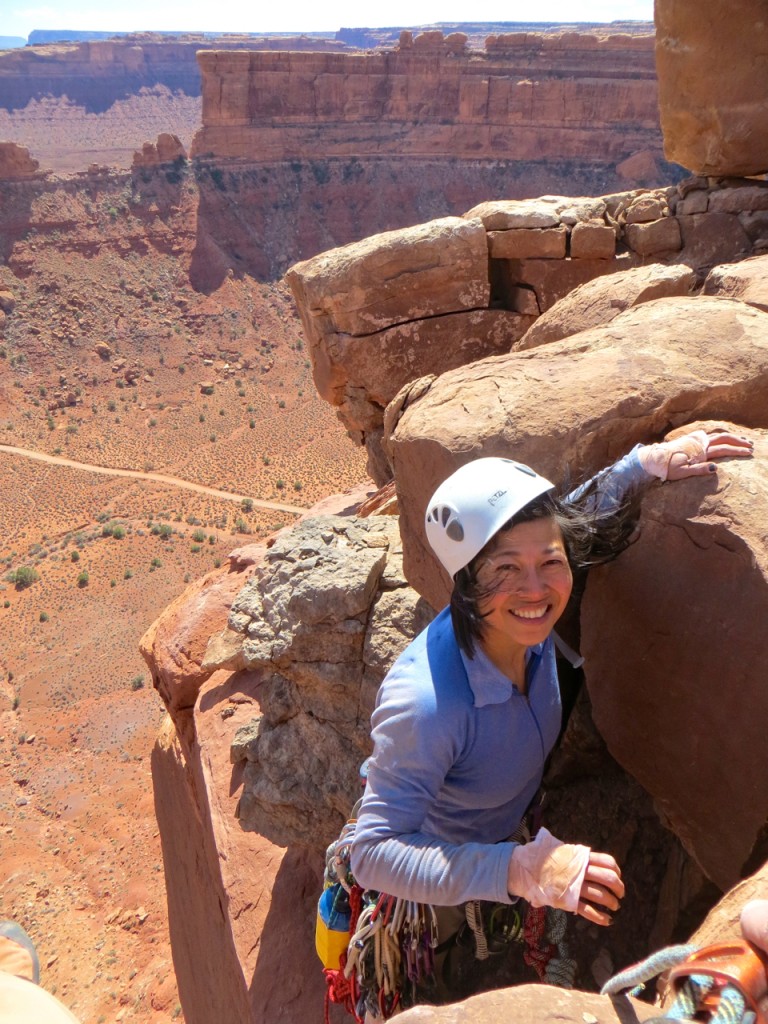 Happy Shirley arriving on the summit of Eagle Plume. It was just a fun, fun climb for us – we both had a really good wholesome fun on it (Apr. 2013). 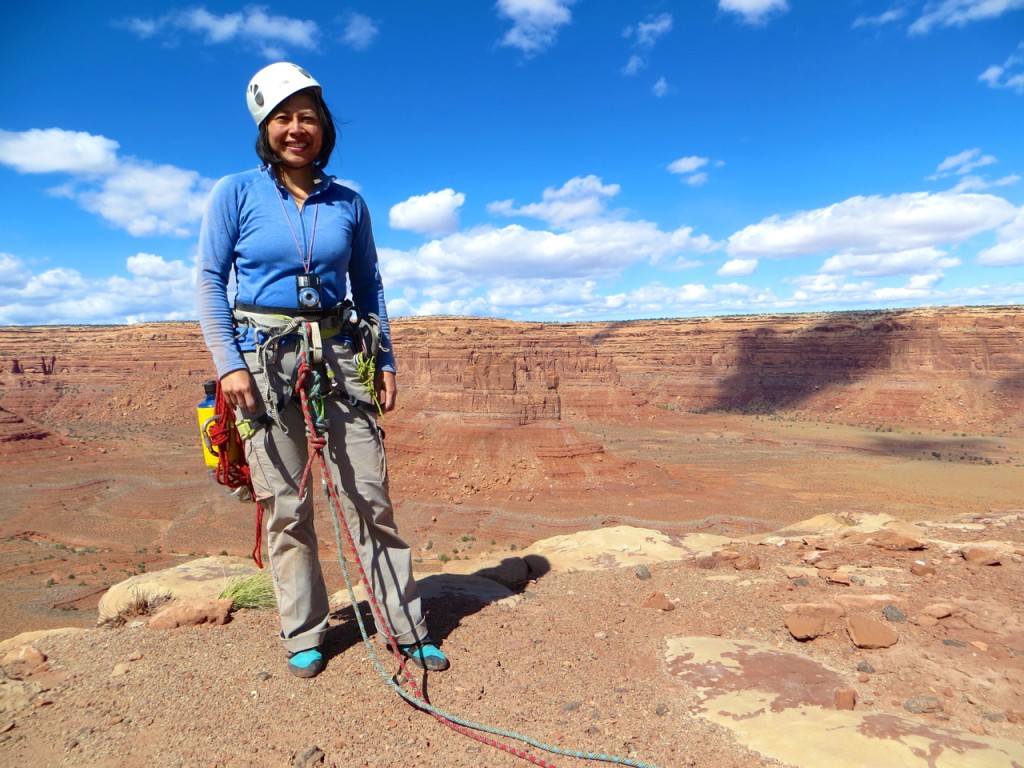 Shirley on the summit of Eagle Plume. View is roughly north. I believe we’re looking at North Tower (left) and Arrowhead Spire in the background (really blend in with the background; Apr. 2013). 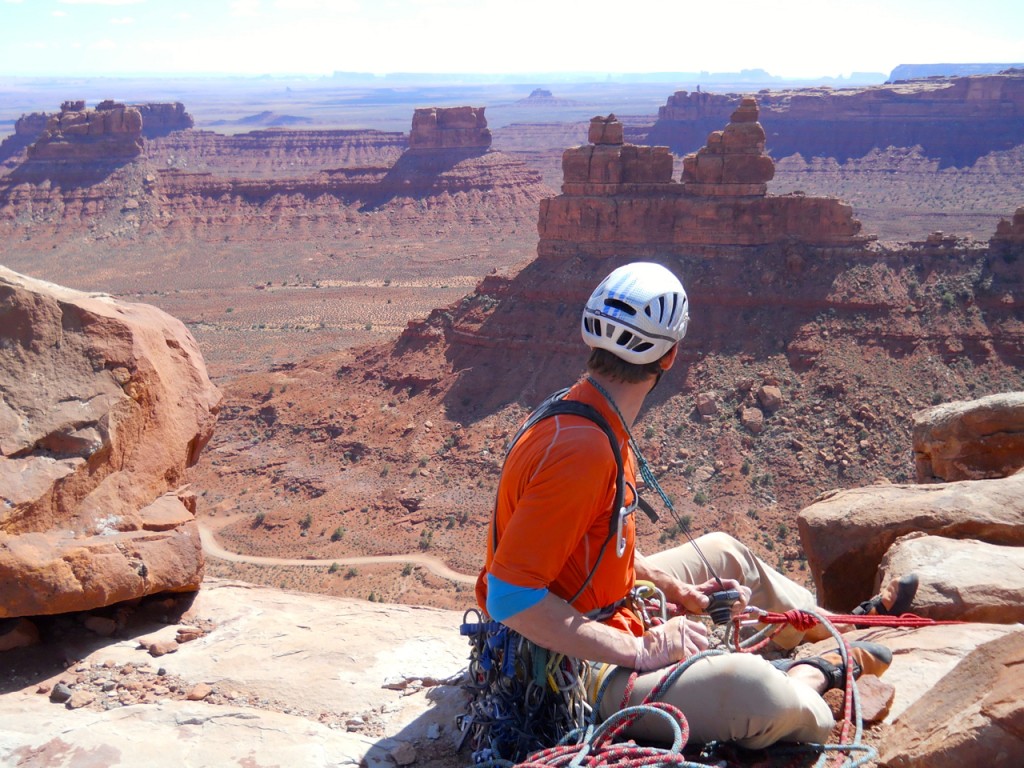 Yours truly on the summit admiring The Puttermans…next time, great area (Apr. 2013). 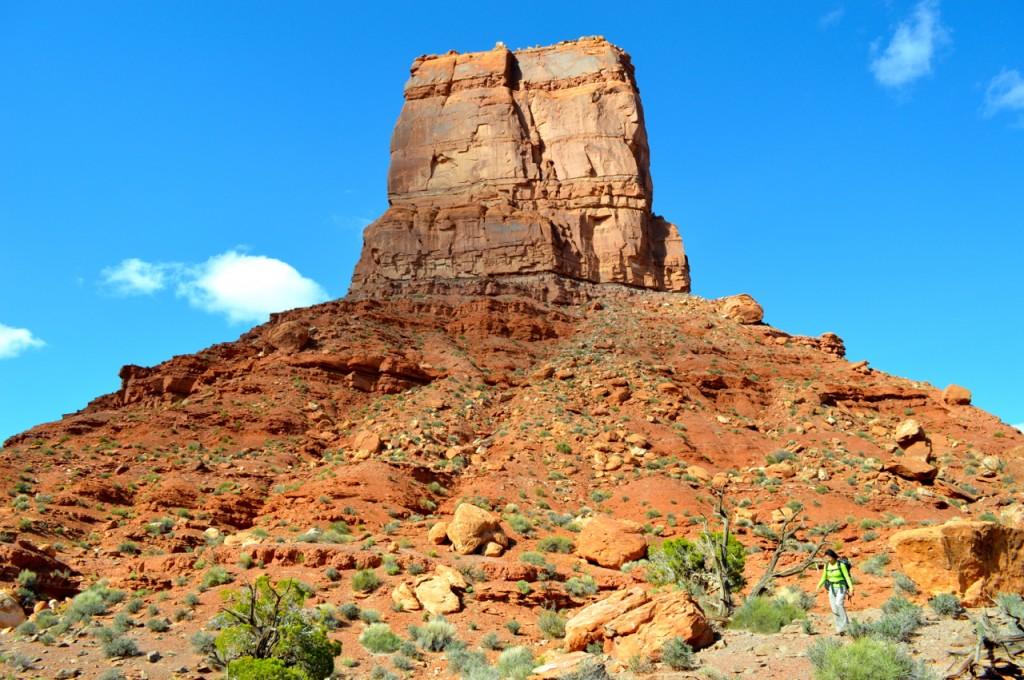 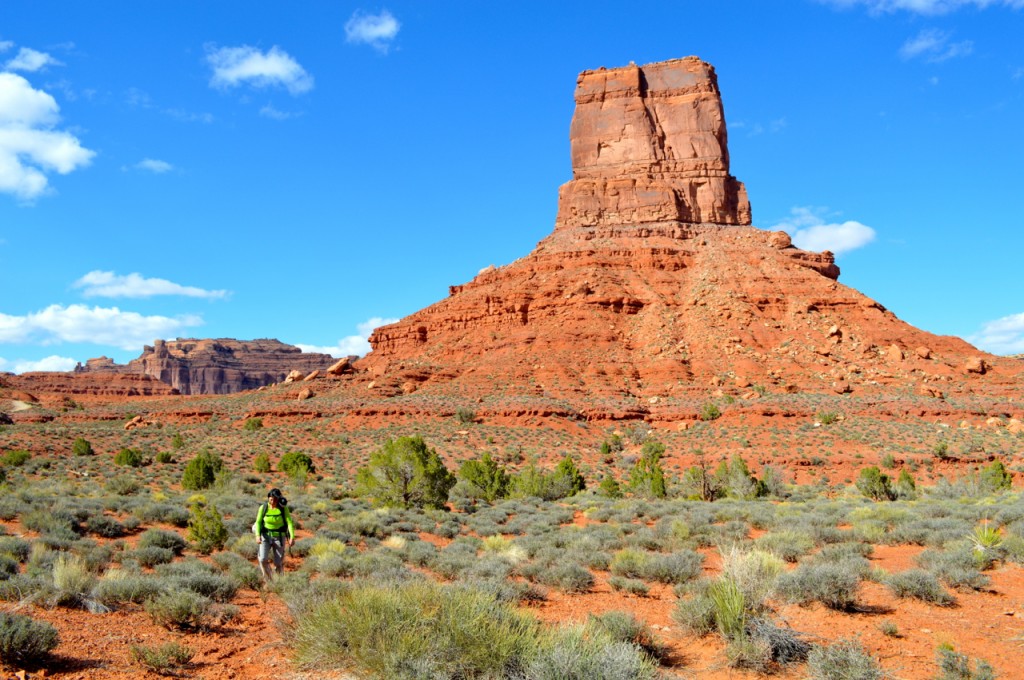 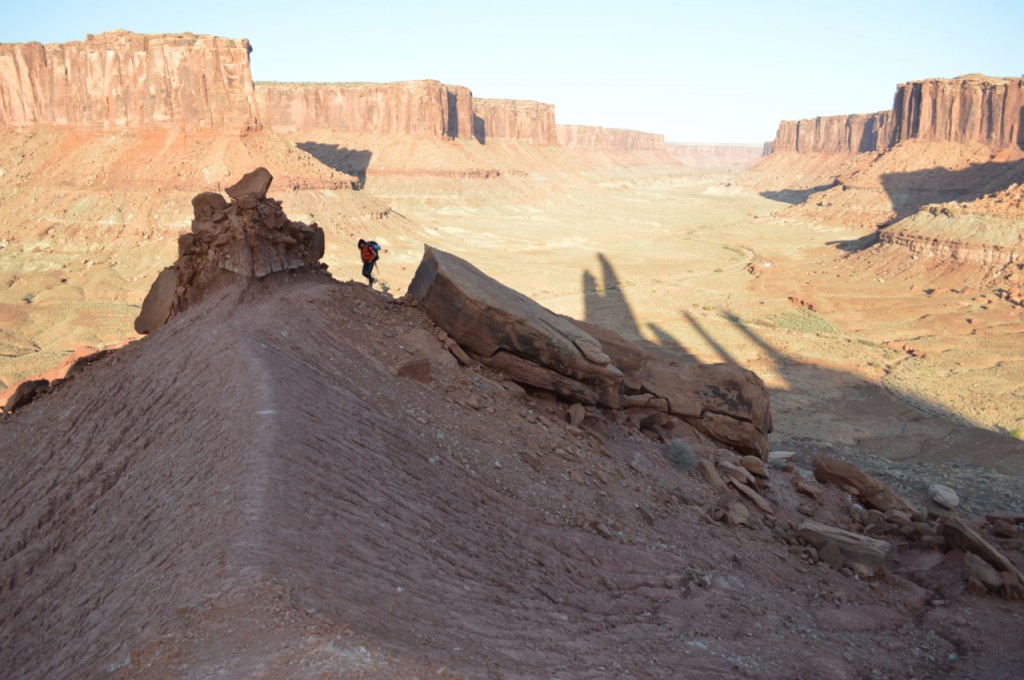 Morning approach hike in to a failure… 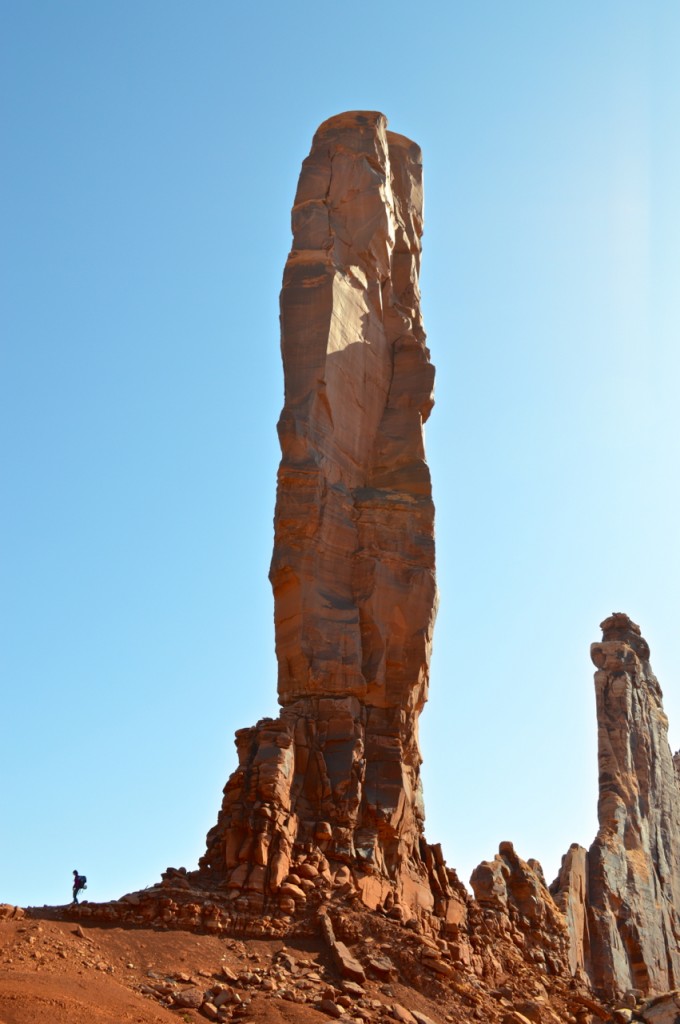