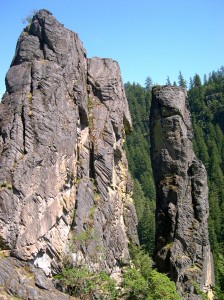 A great day on the rocks with Shirley. Drove down from Portland on Saturday morning and were back home by 7pm Saturday evening. The adventure was spiced up due to a collapsed bridge over the raging Boulder Creek (see photo). The climbing was very enjoyable. We did the Dilley’s Delight (5.9) route to the top of the Old Man and the Northwest Ridge (5.4) of the Old Woman. Had the whole place to ourselves. Perfect weather. According to the summit register, we had the 2nd ascent of Old Man this year. Also, we were impressed by the register on top of Old Woman – the first entry predates my birth by a year! Pretty cool stuff. Will probably go back to do some more pinnacles in the area sometime in the fall. 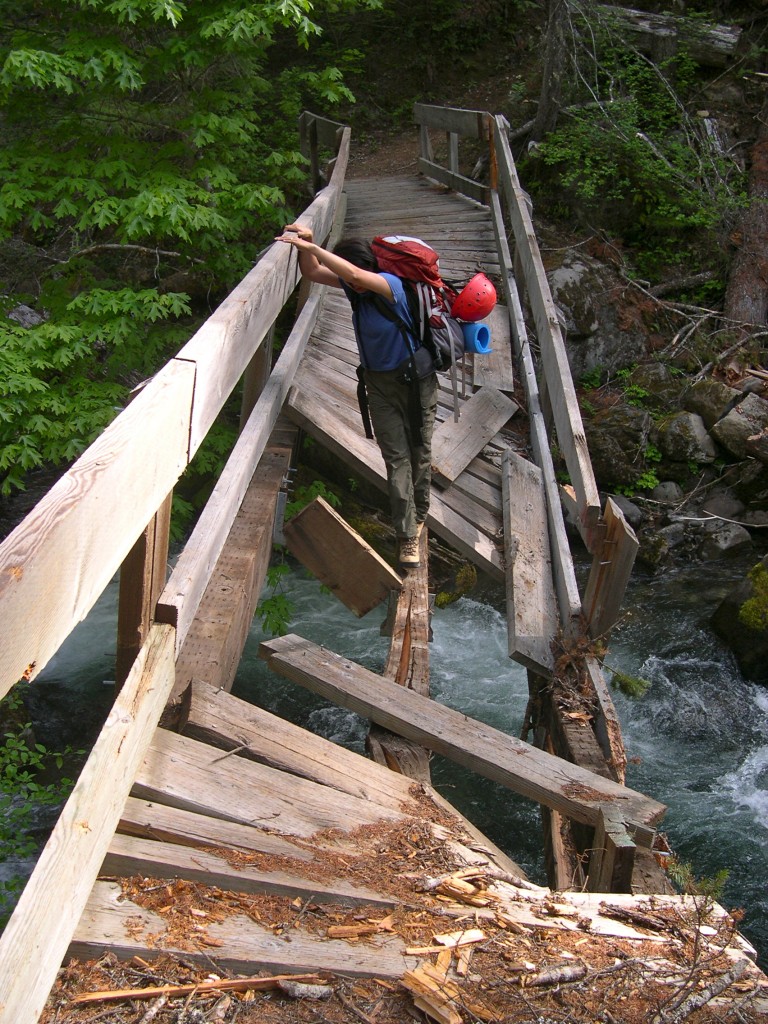 The mental crux of the entire climb day: crossing the mostly collapsed bridge over Boulder Creek. Note that 2 out of the 3 spans are cracked. You walk on the center (cracked) span and hold on to the one remaining with your hands (and hope for the best). Guess the note at the trailhead warning of the washed out bridge was not kidding (May 1, 2004). 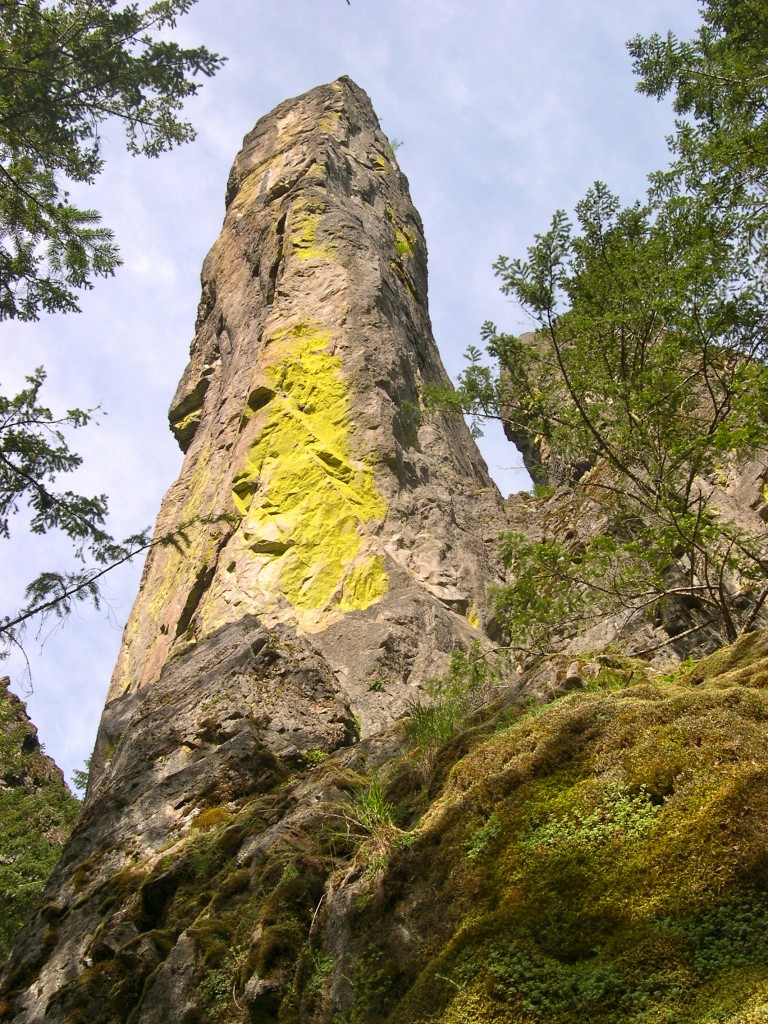 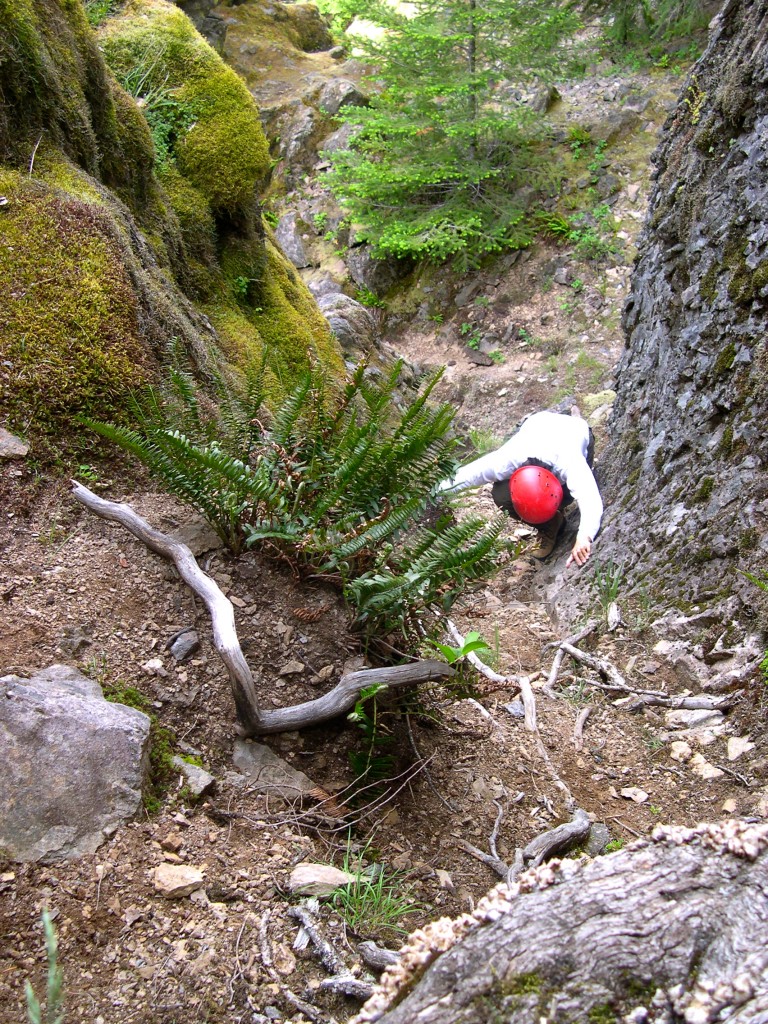 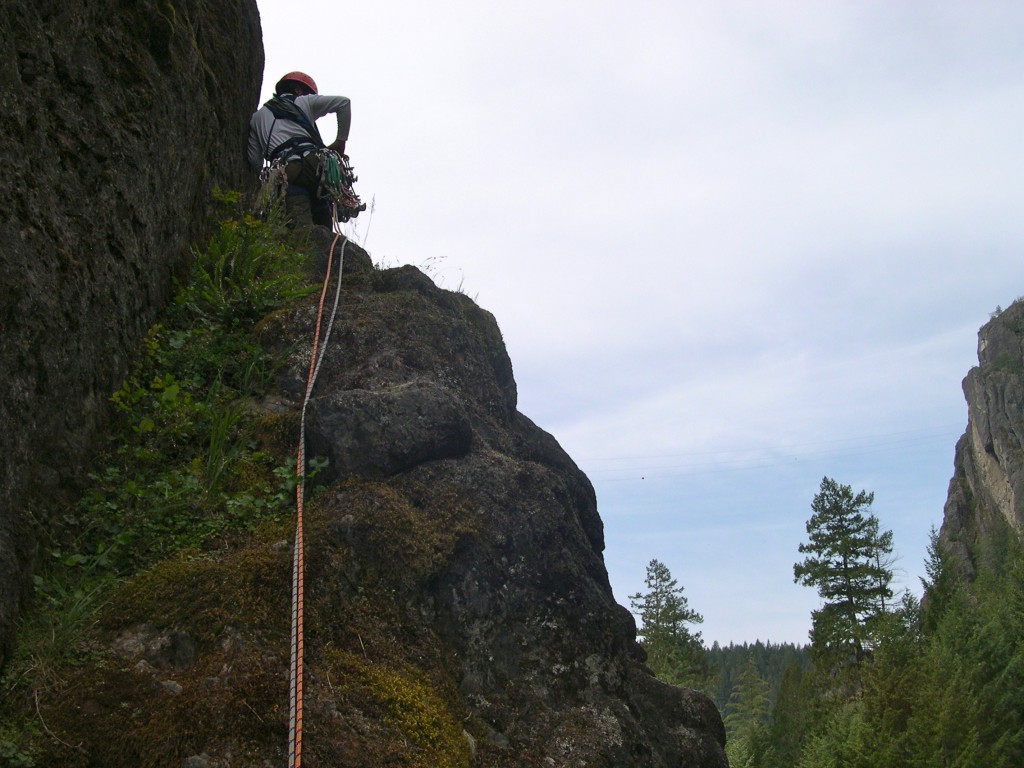 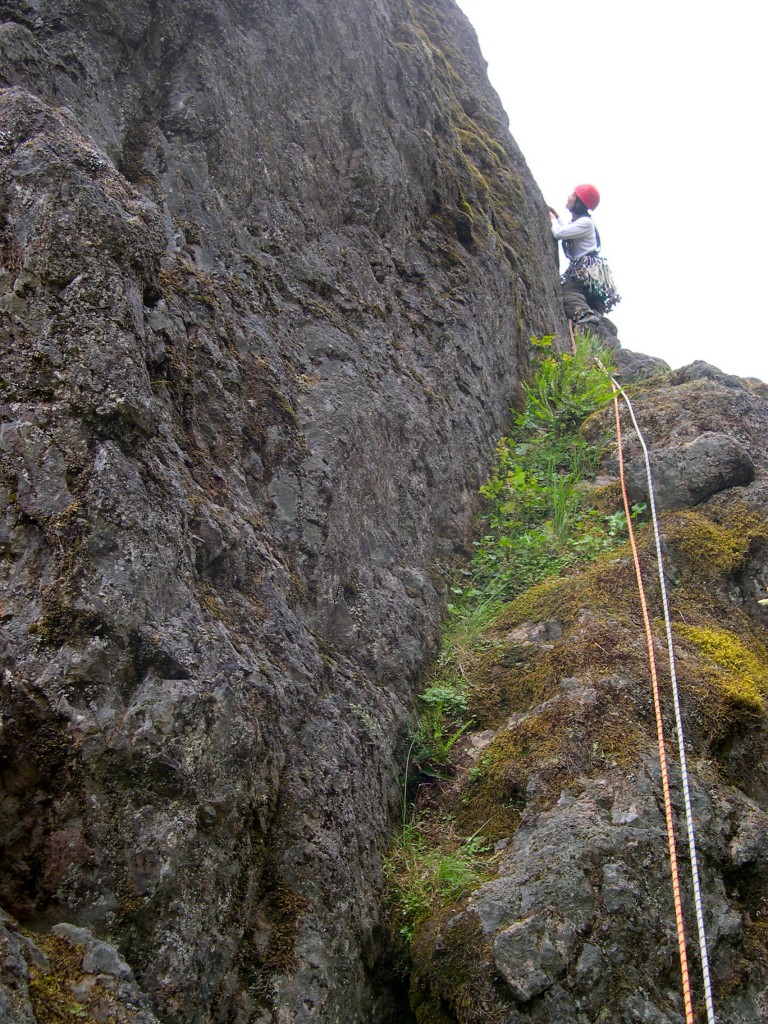 Shirley leading pitch one of Dilley's Delight at the base of the 5.6 crack. The pitch starts with a low angle traverse along a grassy ledge (4th class probably) - approx. 30 feet (May 1, 2004). 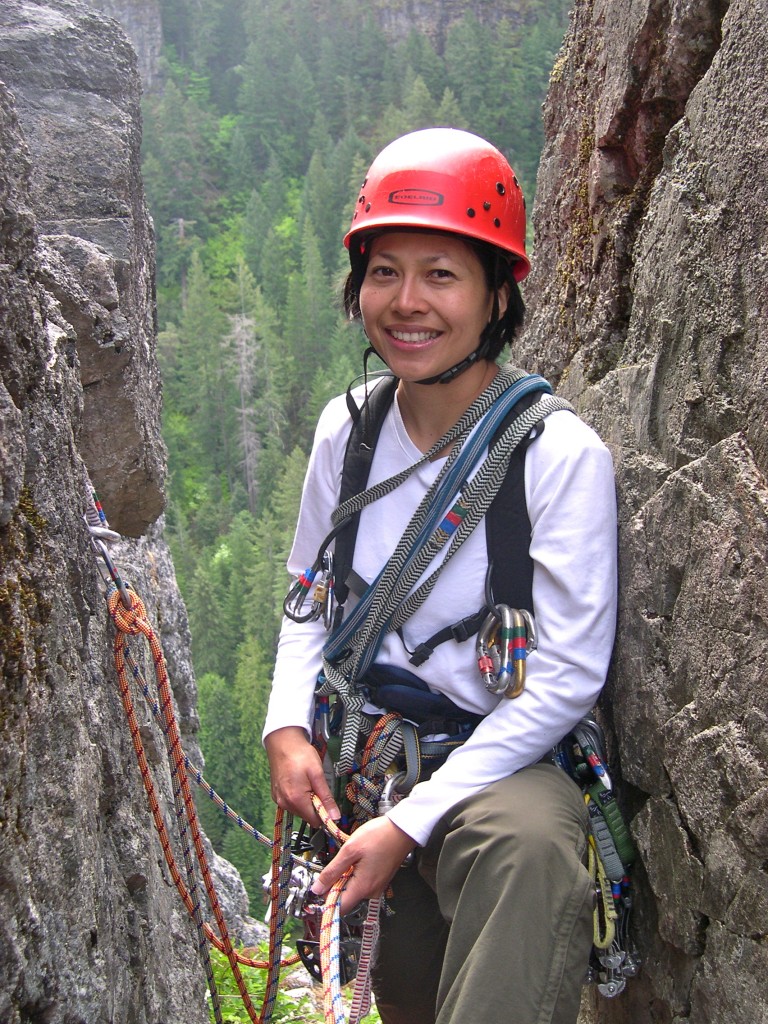 Shirley belaying me from the notch atop pitch one of Dilley's Delight (May 1, 2004). 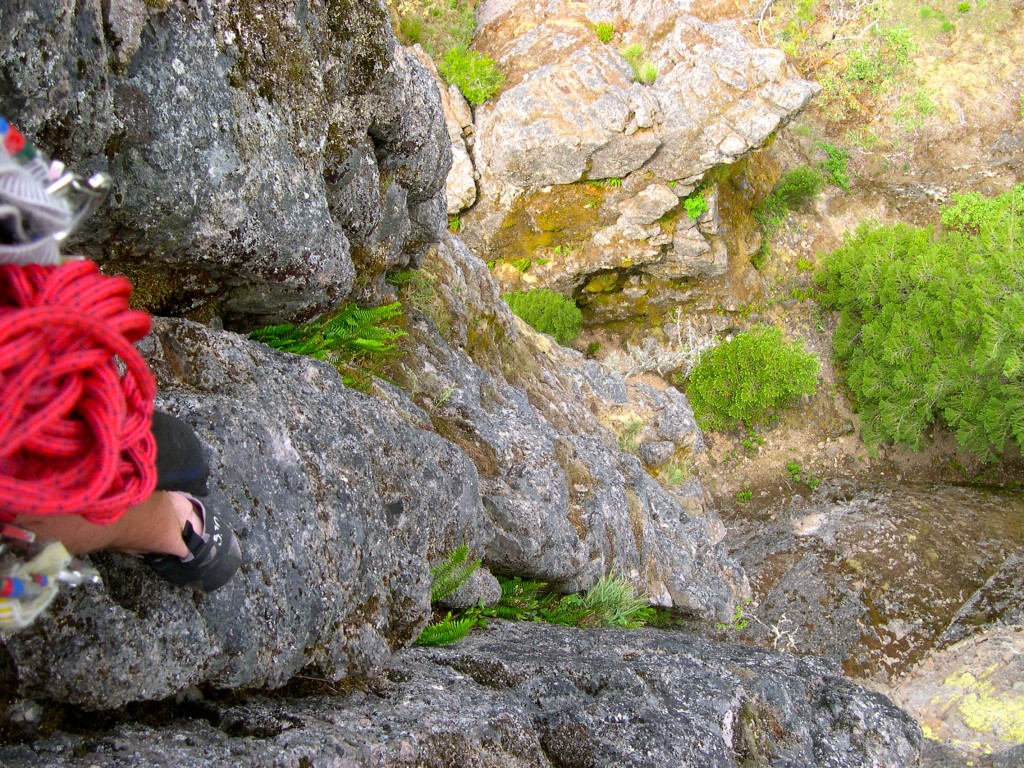 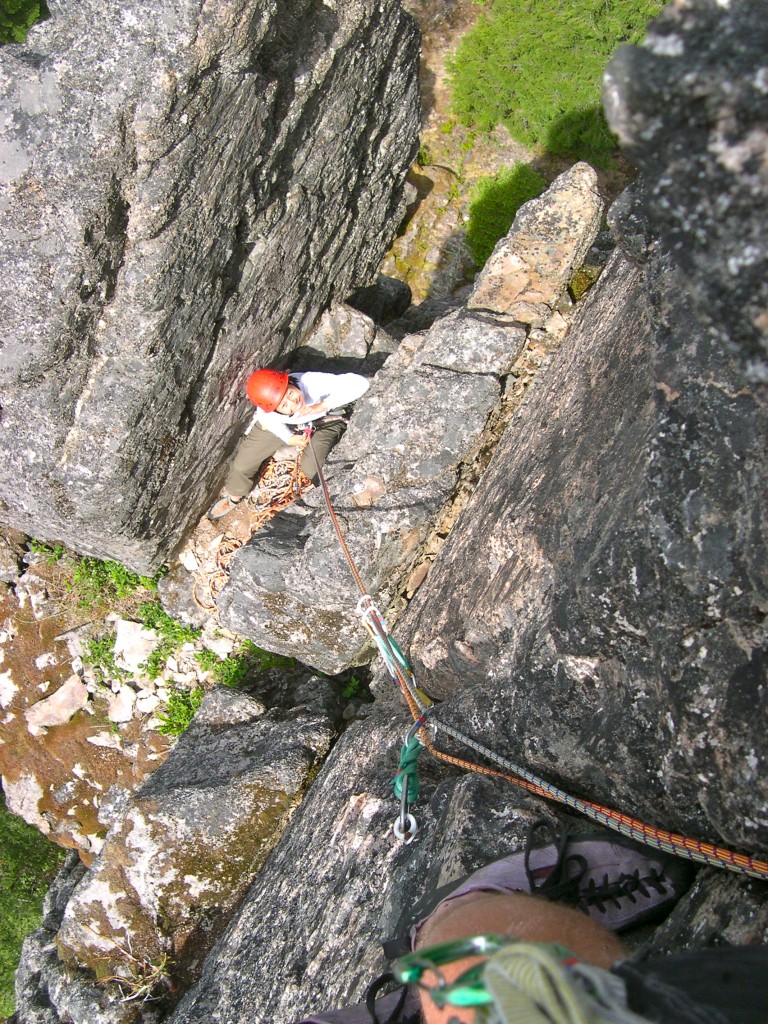 Looking down from just above the initial (5.8) crux of pitch two of Dilley's Delight. Shirley is belaying me from the nice notch below. Note the single bolt at the top of this 15 foot section and lots of trad gear possibilities. This section was harder than it looked from below (May 1, 2004). 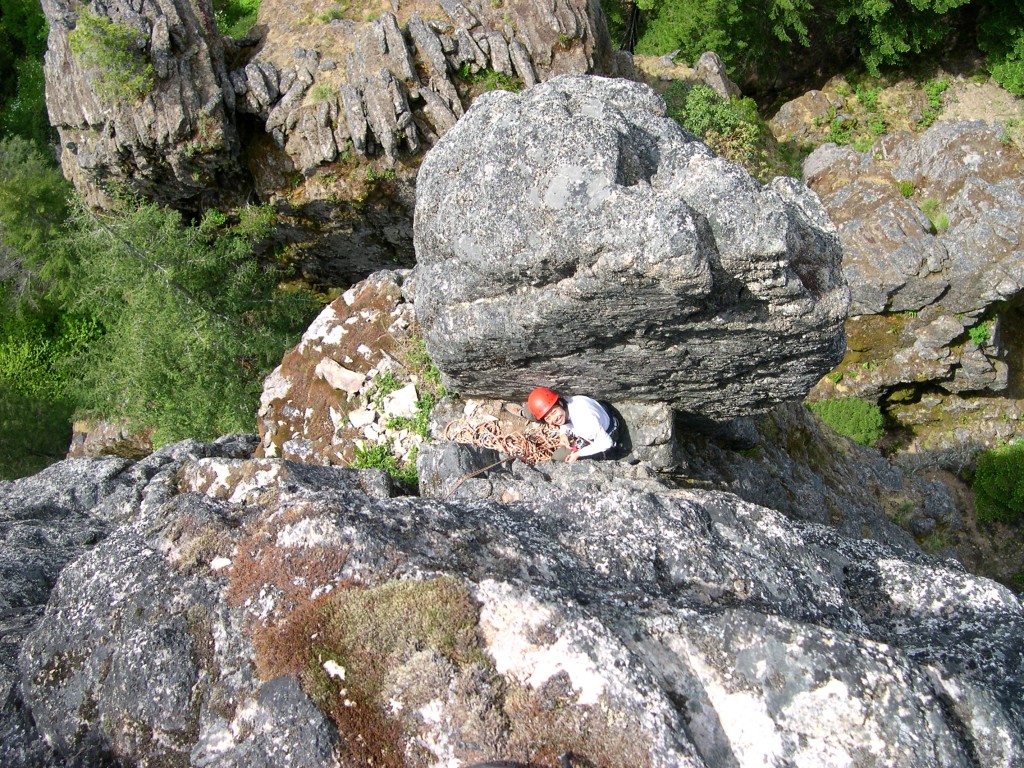 Looking down from the lead of pitch two of Dilley's Delight. This is about 1/3rd of the way up the pitch. Shirley is belaying me from the comfy notch below (May 1, 2004). 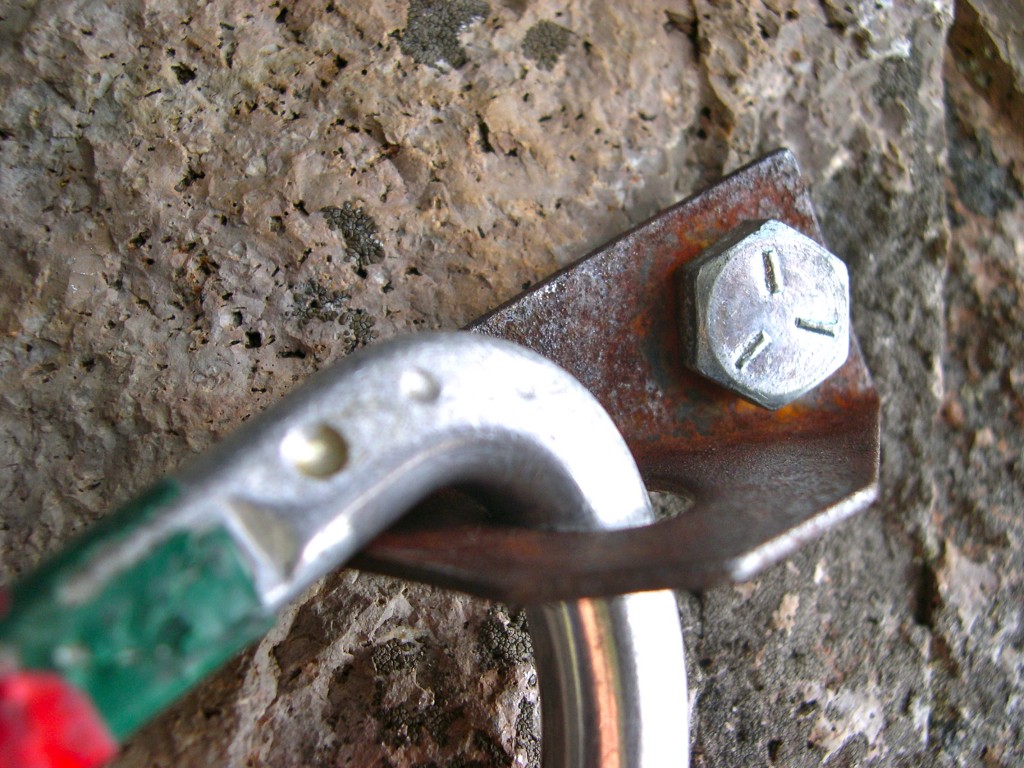 Old hanger somewhere on pitch 2 of Dilley's Delight route on the Old Man. 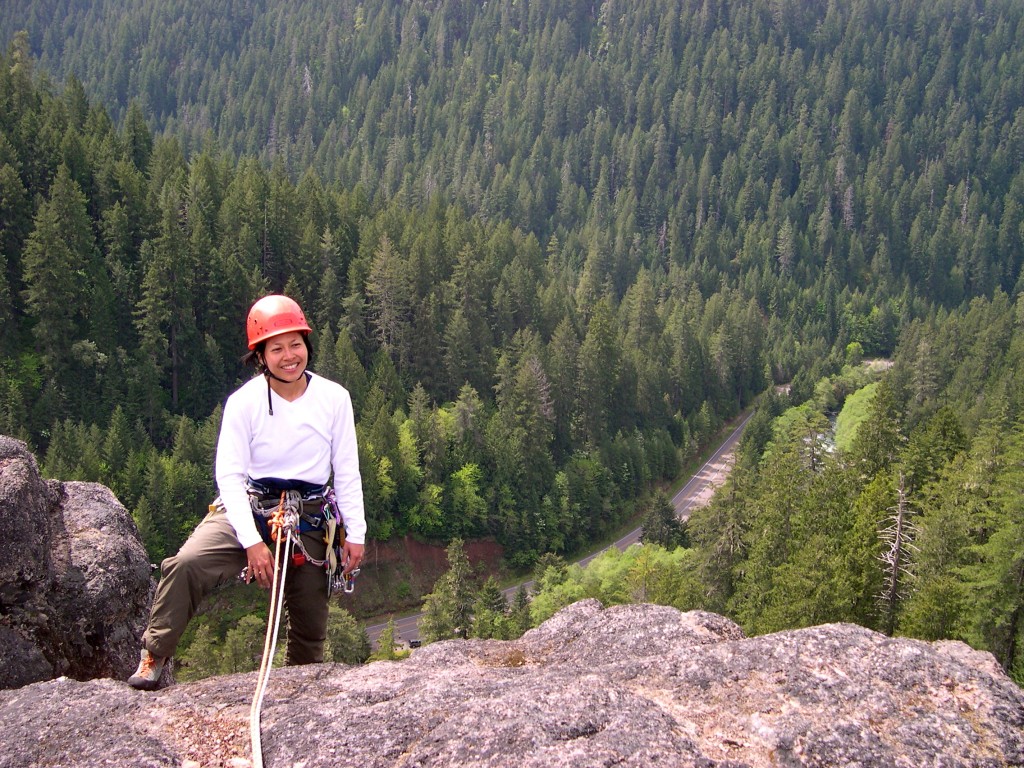 Shirley arriving on the summit of the Old Man via Dilley's Delight route. 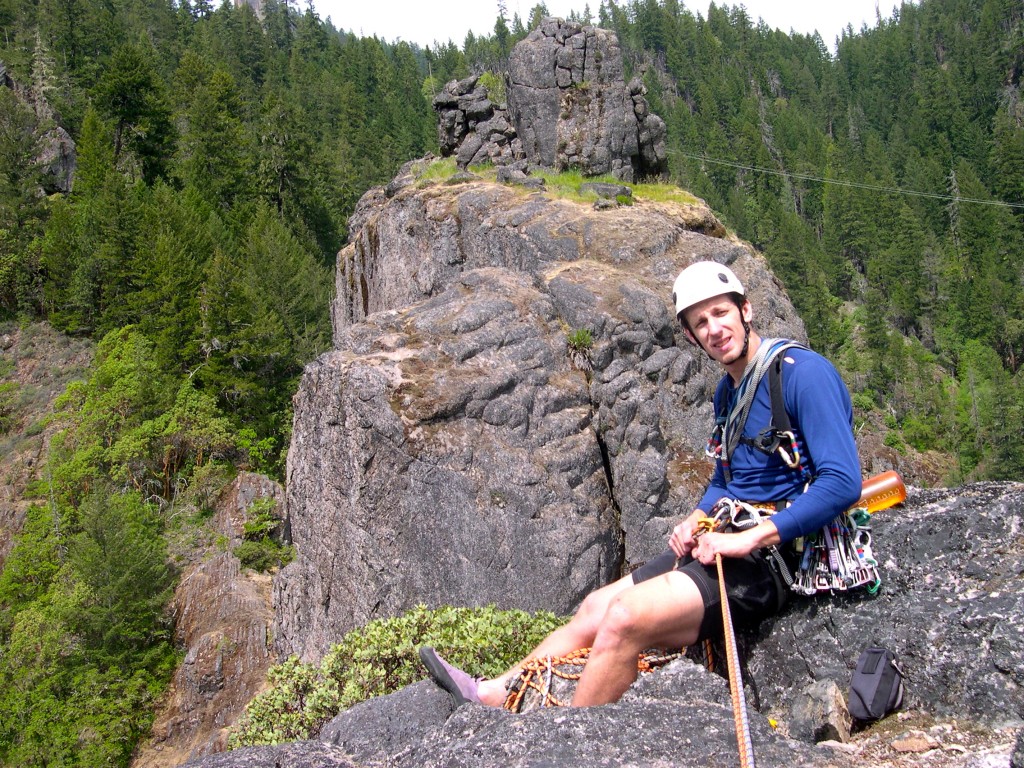 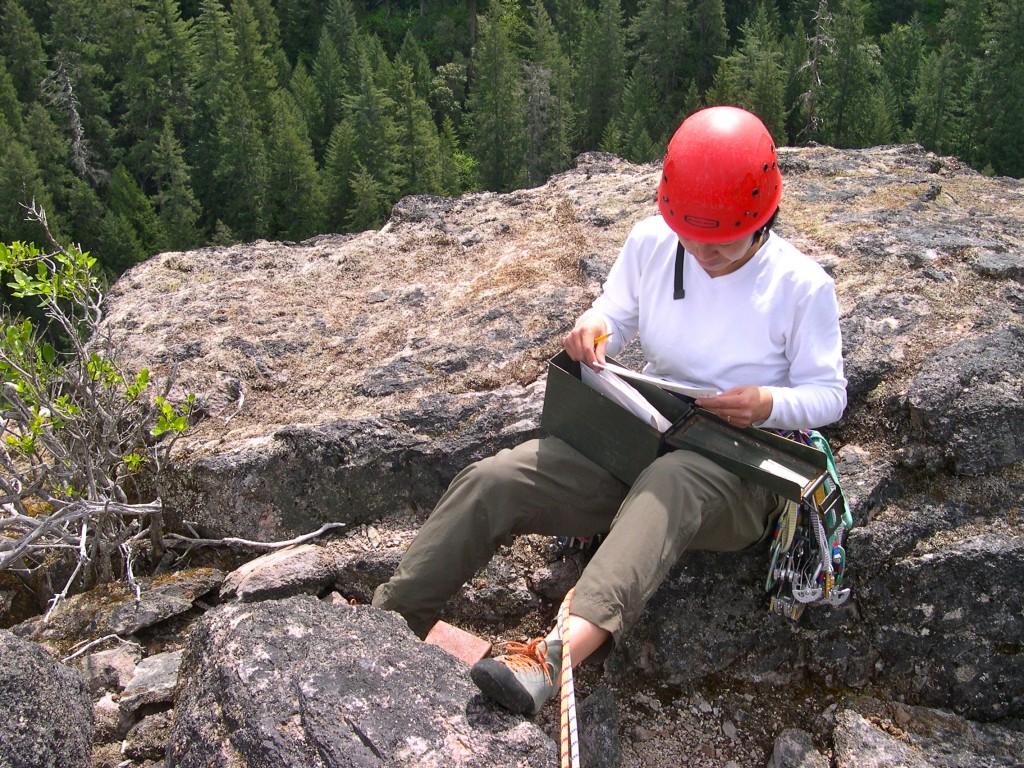 Shirley signing the summit register atop of Old Man according to which ours was the second ascent of the Old Man in 2004. The first was back in March (May 1, 2004) 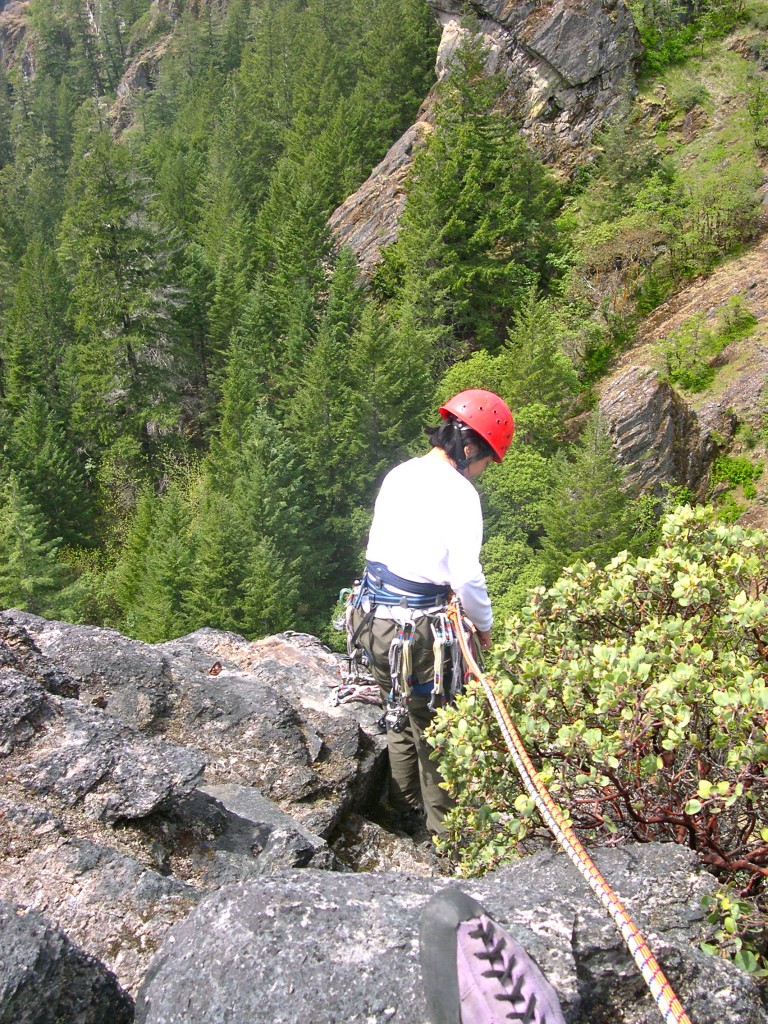 Shirley setting up the rappel on the summit of the Old Man. 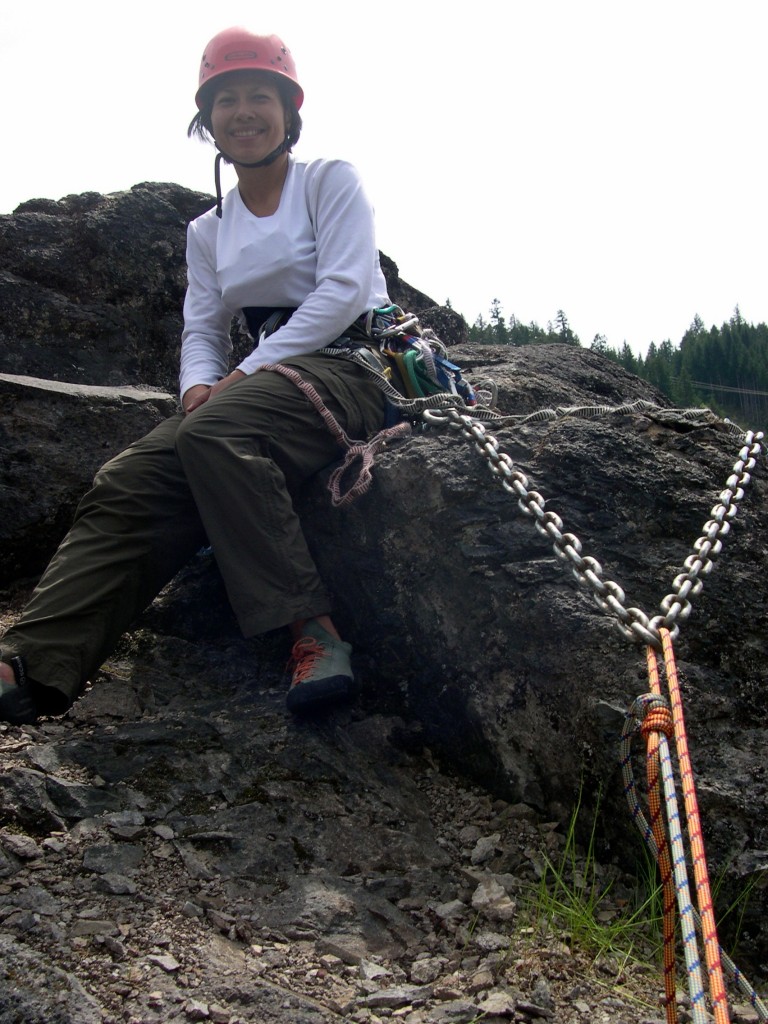 Shirley on the summit of the Old Man. 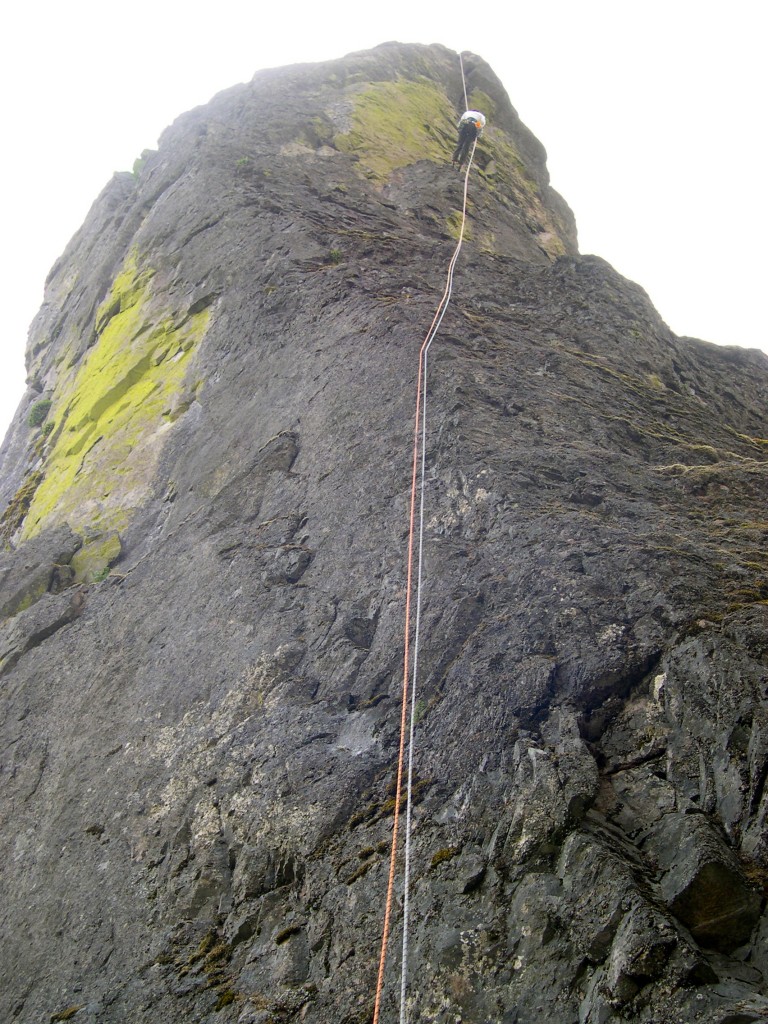 Rapping off the summit of the Old Man. 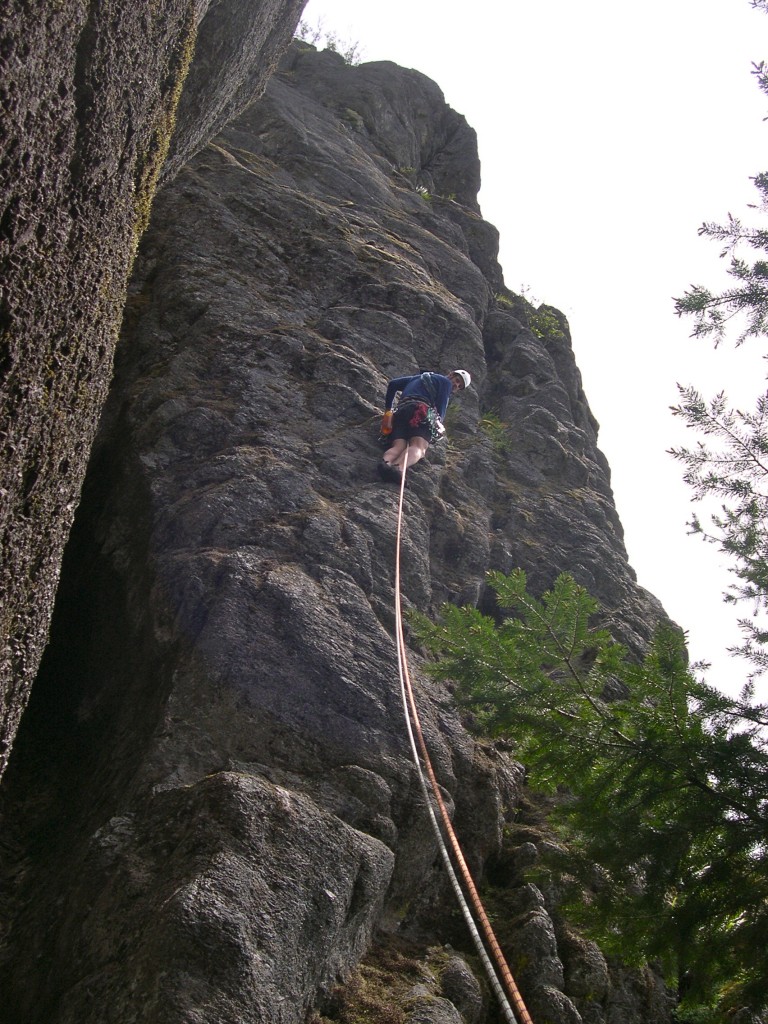 Beginning the lead of the Northwest Ridge on Old Woman (5.4R). Not much pro placement opportunity on the lower 2/3rds but the going is quite easy (May 1, 2004). 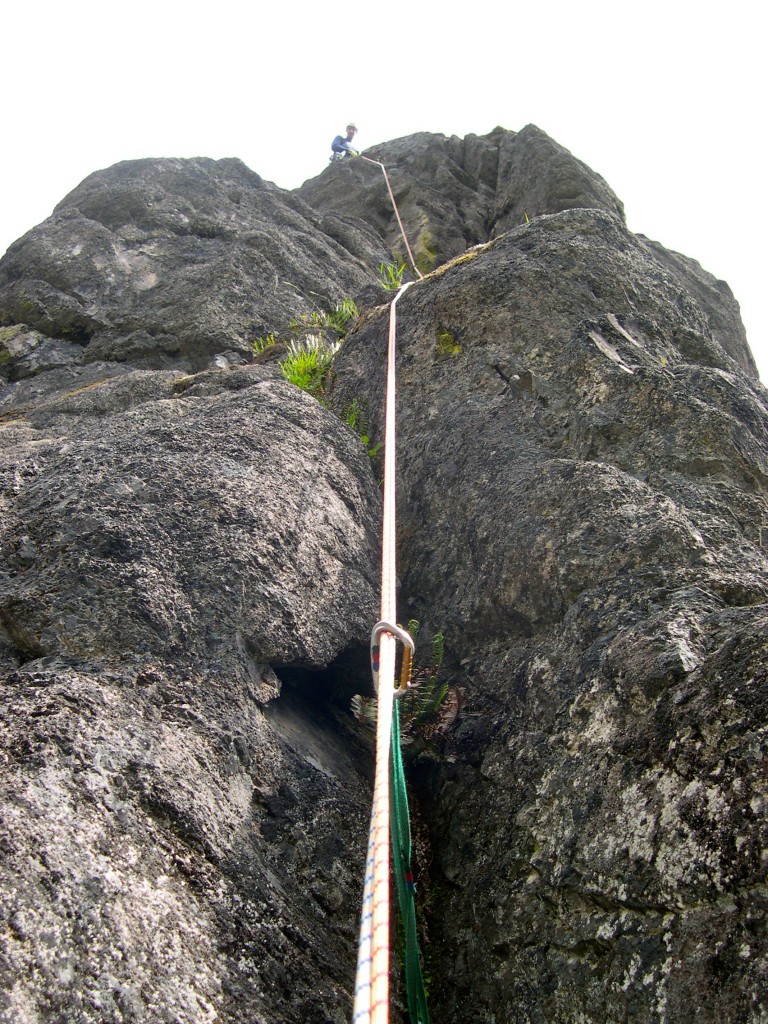 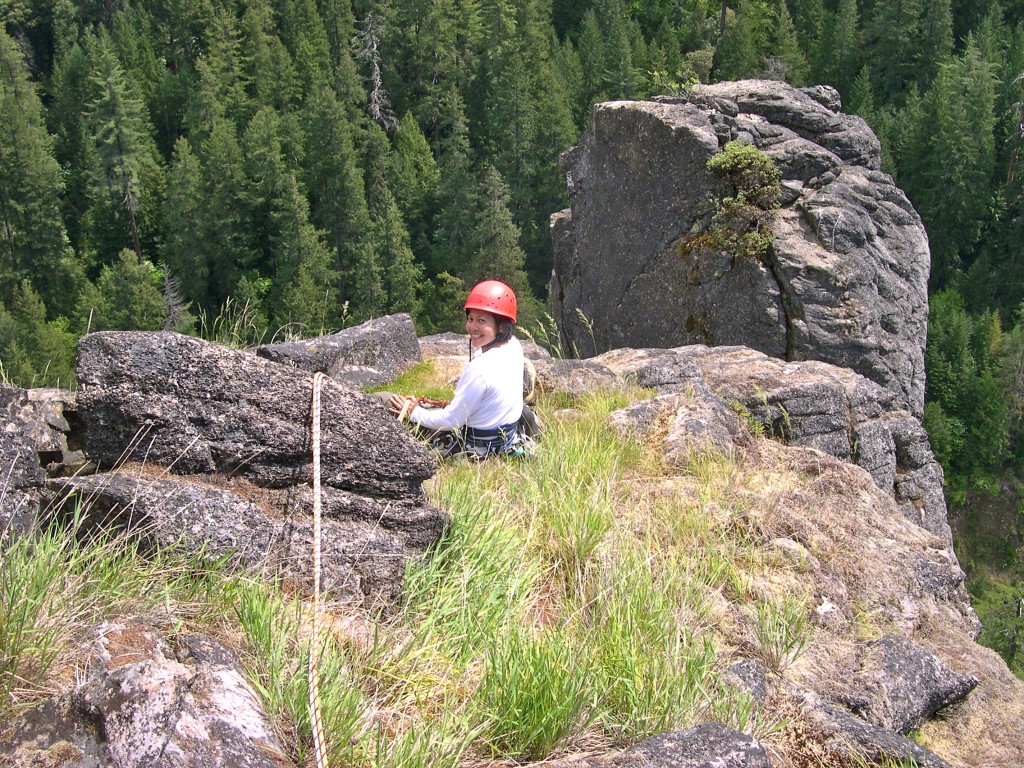 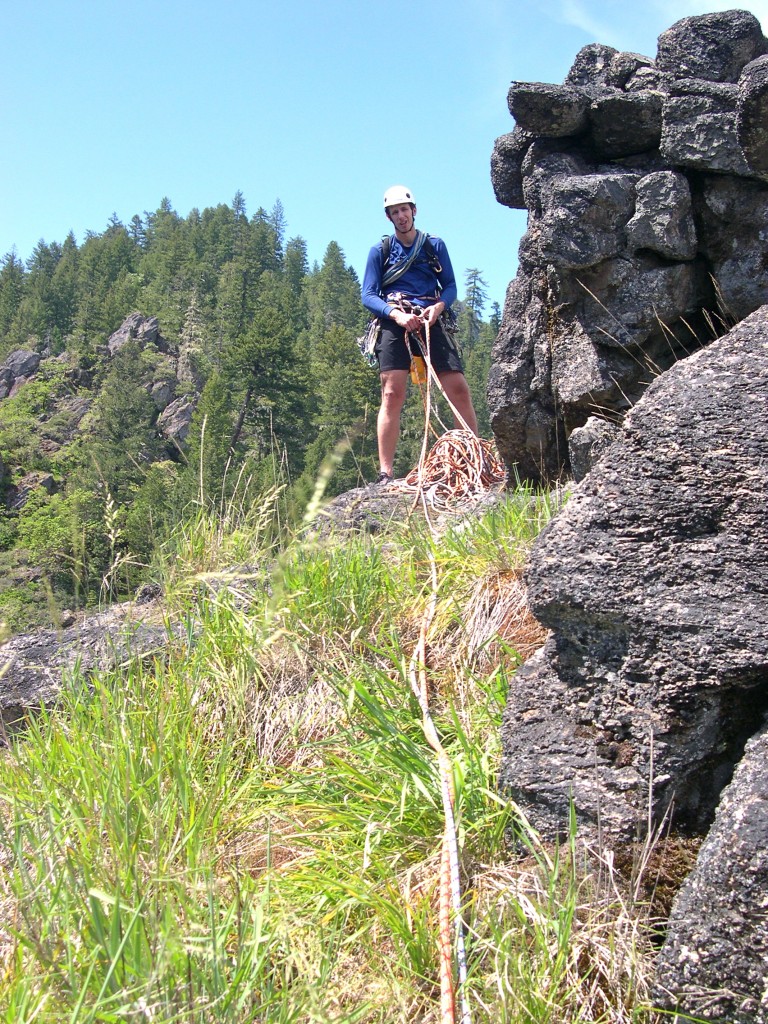 he required summit shot atop The Old Woman. This is looking north and "that" is a nalgene water bottle hanging from the back of my harness......though I WAS quite happy to be up there 🙂 (May 1, 2004). 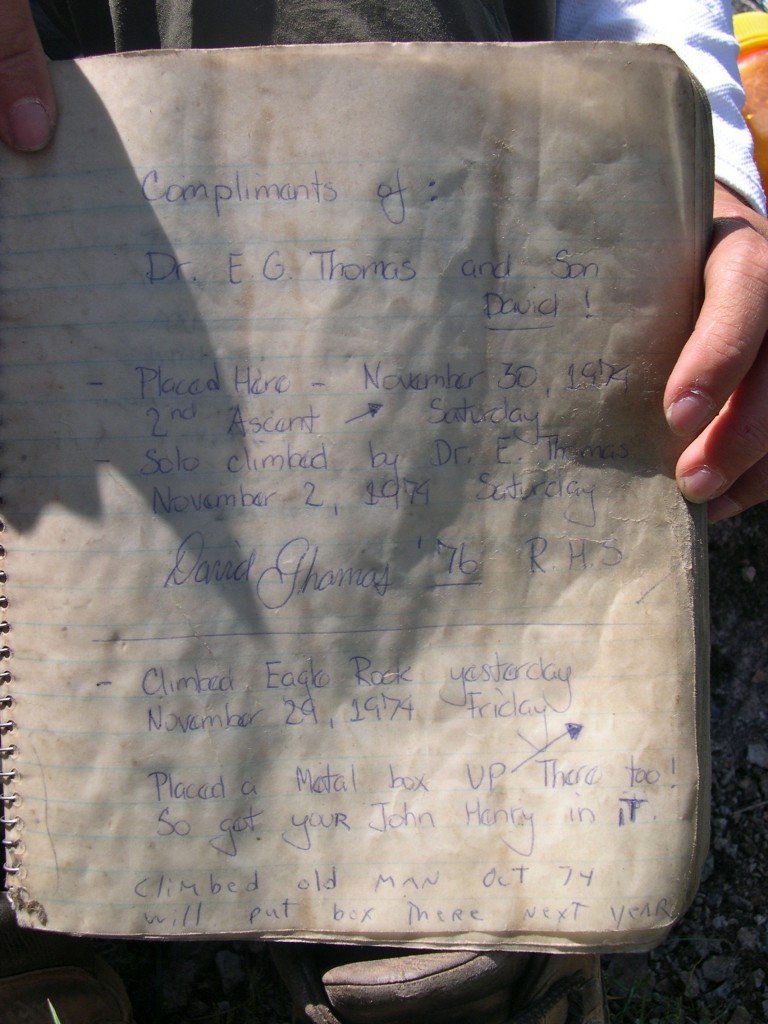 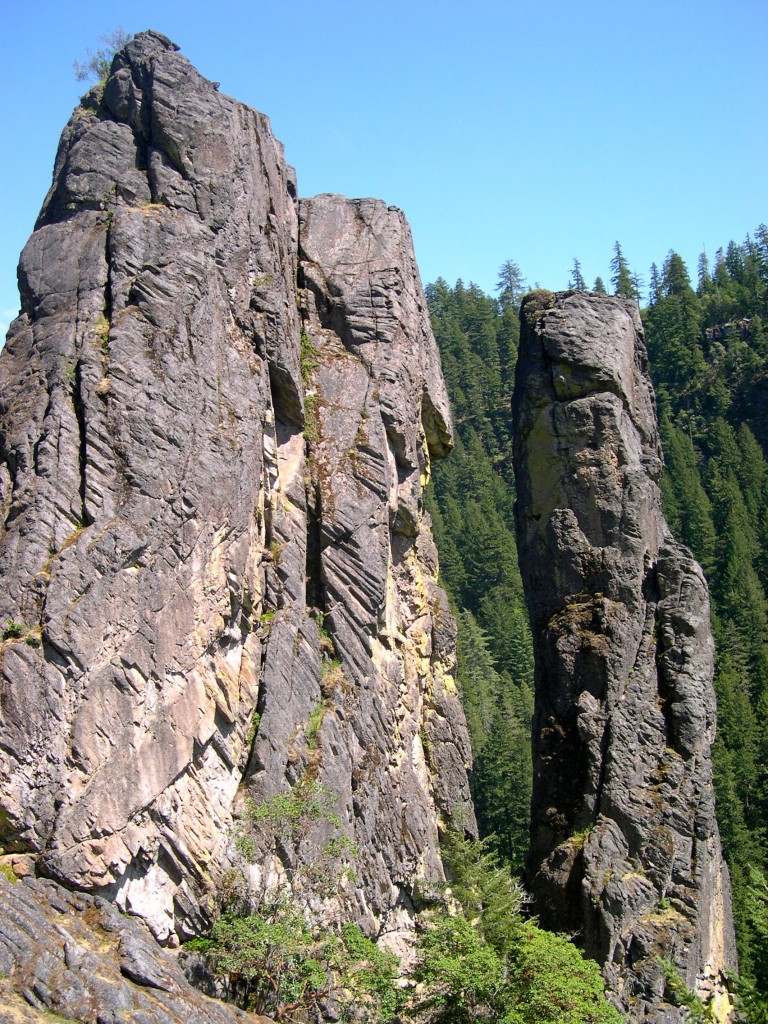 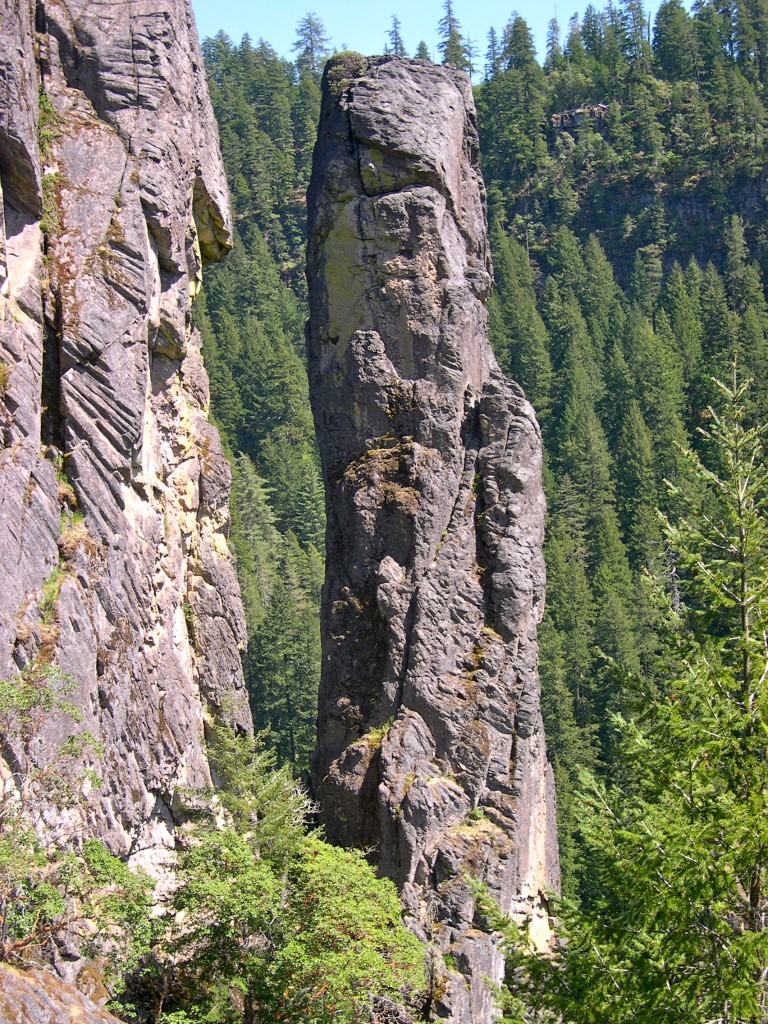 Old Woman (left) and Old Man as seen from the northwest. Dilley's Delight route climbs up to the obvious notch on the right side of The Old Man (May 1, 2004). 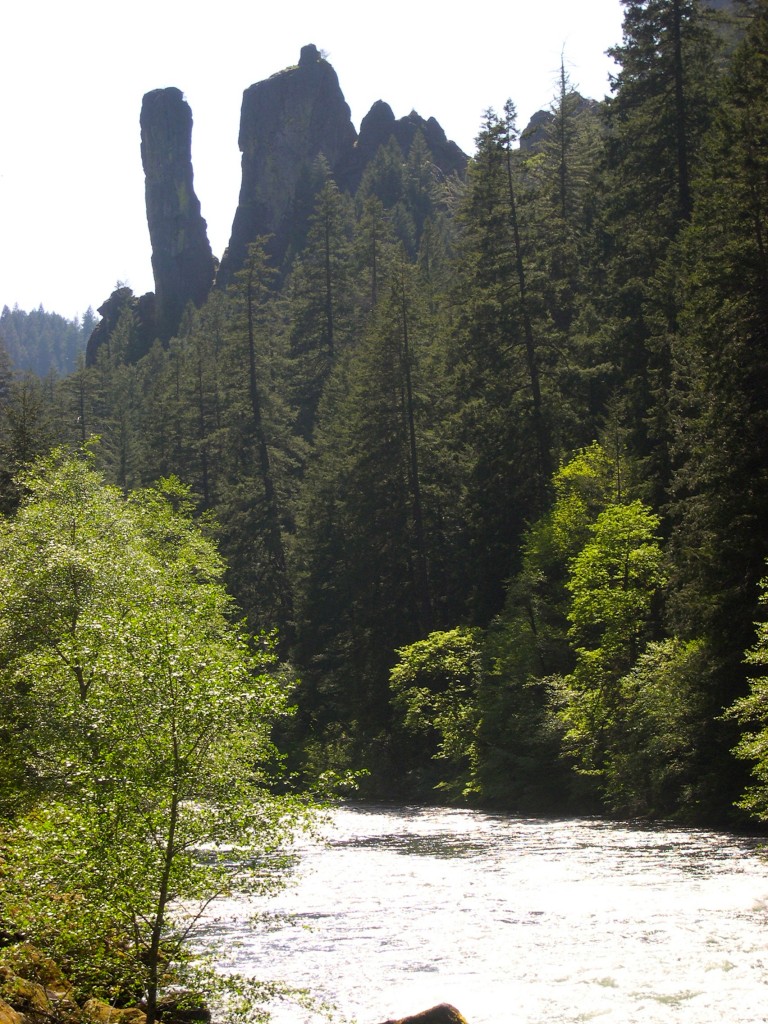 Old Man (left) and Old Woman as seen from highway 138 just east of the formations. Yes, it's not the greatest photo as it was shot with the sun shining head on, but it does show the sleek profiles of the formations (May 1, 2004). 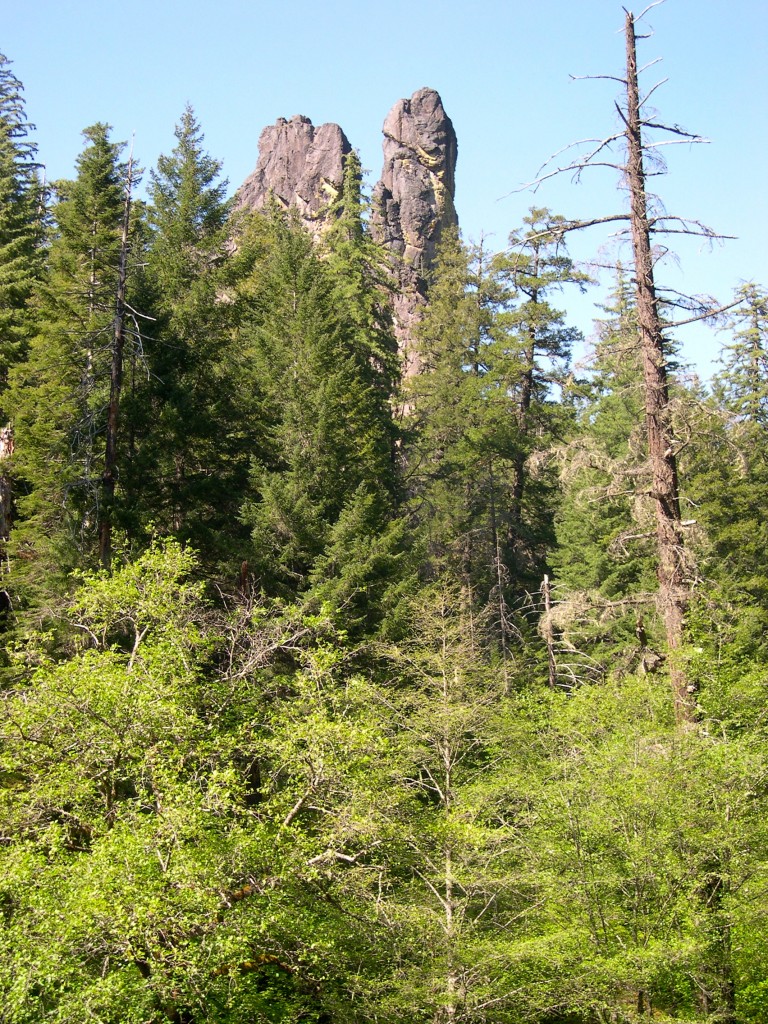 Old Man and Old Woman (left) as seen from the highway.