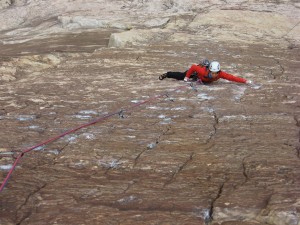 We’ve had a few trips out recently where flying was required and so Blondie was forced to sit those out at the doggie motel. No more! Given the pricey airline tickets, Turkey Day Weekend was going to be an all around family-fun time! With a stack of audio books (Michael Connelly’s crime novels deliver as usual), a thermos filled with quality Portland coffee and a dozen microbrews we hit I84 Wednesday night after work heading east into the wilderness. Standard push…Portland holiday traffic, Baker City 1st car refuel/pee break, Boise coffee refuel, a bit of sleep somewhere, Salt Lake City coffee refuel, and finally Las Vegas a short 1200 miles later. A quick nod to the crack wh…es at the Motel 6 convenience store (seems we’re all regulars there) and a good night’s sleep in the non-upgraded wing of the motel directly under the flashing orange “Hooters” neon sign. 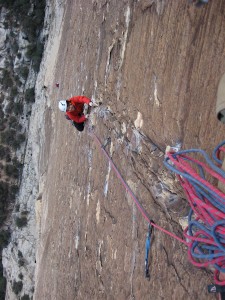 Day one plans take us out to the Black Velvet Canyon. Thought we got up early but there is already a ton of cars at the trailhead. Sheeeet. We grab our junk & hike in quickly. Blondie loves this boulder hopping in desert washes – just as I think a 3rd class step is too steep/tall for her, she surprises us with her canine climbing skill. We arrive at the base of the class 4 step and see a party on pitch two of Turkeys and one on Sour Mash…but that’s it! We gear up and start flaking ropes at the base of Prince Of Darkness…before we’re done, no fewer than five parties show up including 2 or 3 aiming for POD as well. We knew the route is popular but damn! Things work out great though as most parties scatter onto other lines including Rock Warrior & Fiddler. There’s one party behind us & I offer to let them pass if I’m really dragging ass on pitch two. They decline and later end up bailing from pitch 2 or 3. Shirley leads pitch one & I do two. Things are thin here but I’m slowly working my way up as…damn, seems I z-clipped myself – I’m a f…ing moron! Shirley is not having a great lead day & I end up leading the rest of the pitches. Knowing that the route has a ton of hanging belays, we’re both sporting our fat big wall climbing harnesses – a very nice! It’s almost like sitting in a recliner, now only if my toes would stop hurting. I do not really find the climbing monotonous – in fact, I find it very satisfying. There’s a mix of crimping and some smeary slab moves. Great fun! Somewhere midway up the route, I hear my name called out…I look up and after a short delay, my brain finally registers that we know the guys on Turkeys next door: Paul (with whom we’ve climbed The Predator tower in Moab) and Brad (with whom we drank beer afterwards). We make beer plans for later that evening. The short crux goes well and in retrospect I think it’s easier than pitch 2 (maybe it’s a height thing?). We arrive on Turkeyland Ledge together with Brad and Paul & start rapping down. As we’re hiking out in the coming dusk, we see headlamps light up high on BV Wall and on Frogland…glad it’s not us. Beer plans turn to margarita plans somewhere on the hike out & I go to bed quite hammered that night. Good times. 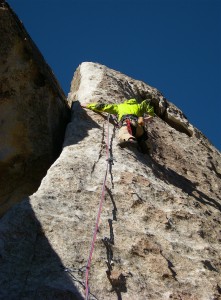 Day two starts out late and lazy (& a touch hung over in my case). Our fingertips are sore from crimping and we’re thumbing the book looking for something easier over a nice breakfast. By the time we reach the trailhead, we find it overflowing with cars…shit. Hike to the base of the chosen climb only to find parties on every pitch and a line at the base. The non-recommended start option is also occupied. Oh well – we got what we came for. That evening finds us at the City Of Rocks in Idaho .

A chilly morning greets us and though the sun is out, the thermometer says 20F…we’ve come this far. Make our way to Elephant Rock and pick the sunniest face. With numb fingers and toes, the crimpy sport line is more challenging than it looked from below. We spend the rest of the morning hiking around and scoping lines for spring. Have never been to The City this late in the season. Ten brief hours later we’re back home in Portland .

A Couple Of Photos 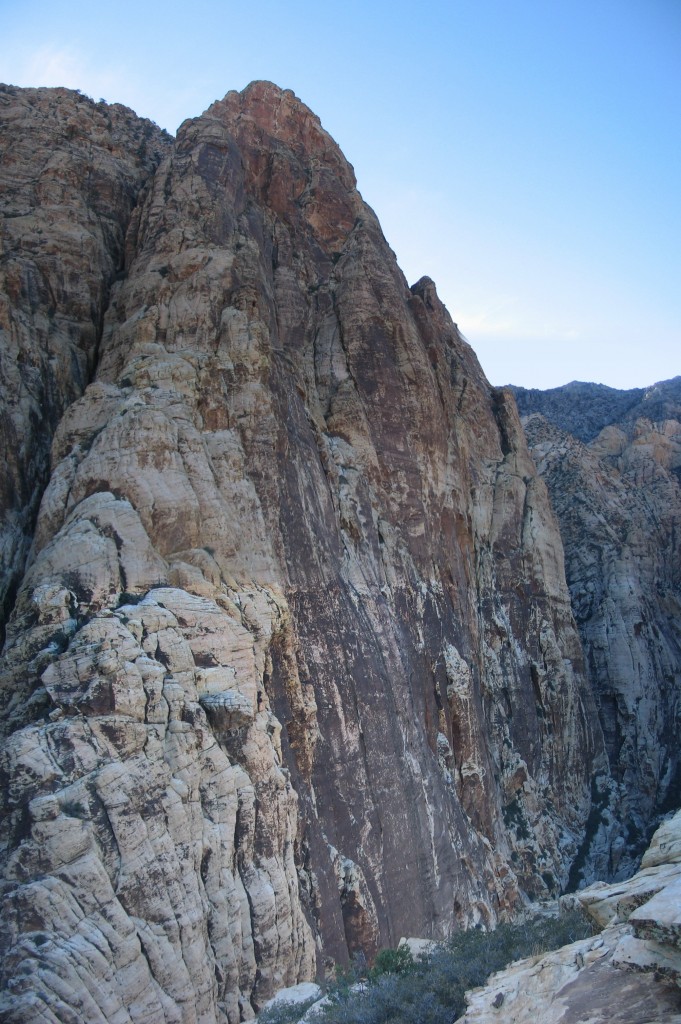 The 2000-foot tall Black Velvet Wall as seen from the summit of Whiskey Peak. Home to many of the Red Rocks' ultraclassic routes including Prince Of Darkness, Dream Of Wild Turkeys, Sour Mash, and of course Epinephrine (note the white capped Black Tower formation near right hand side of the Wall). 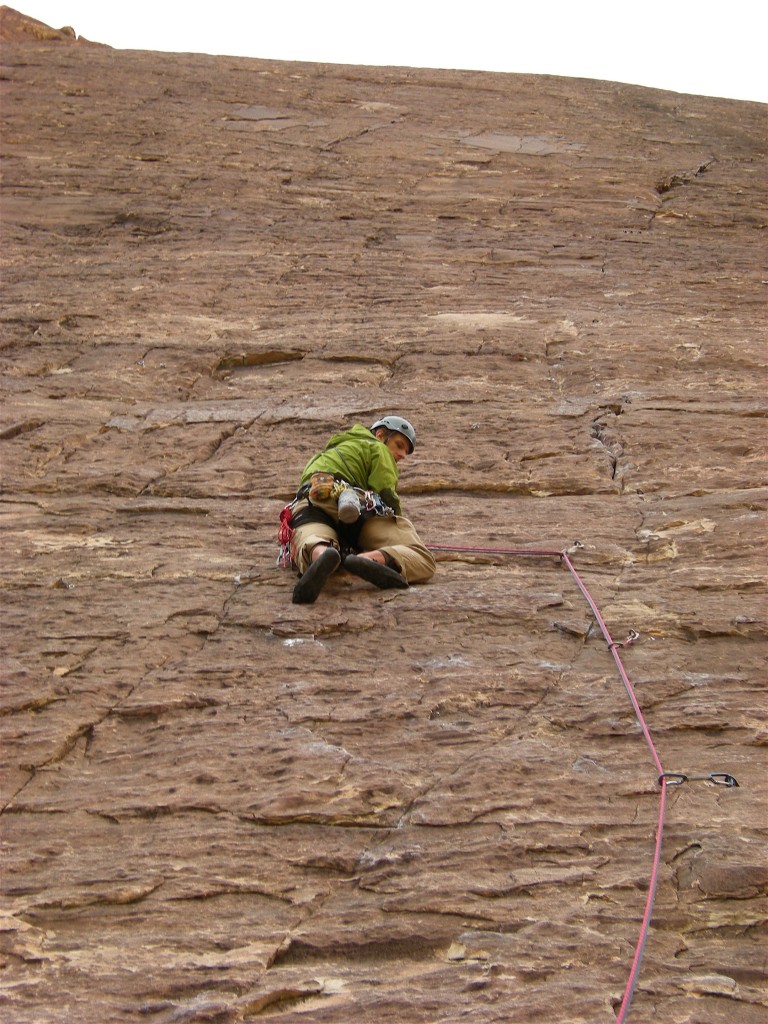 Yours truly on P2 of the beautiful Prince Of Darkness on Black Velvet Wall (Nov. 2009), 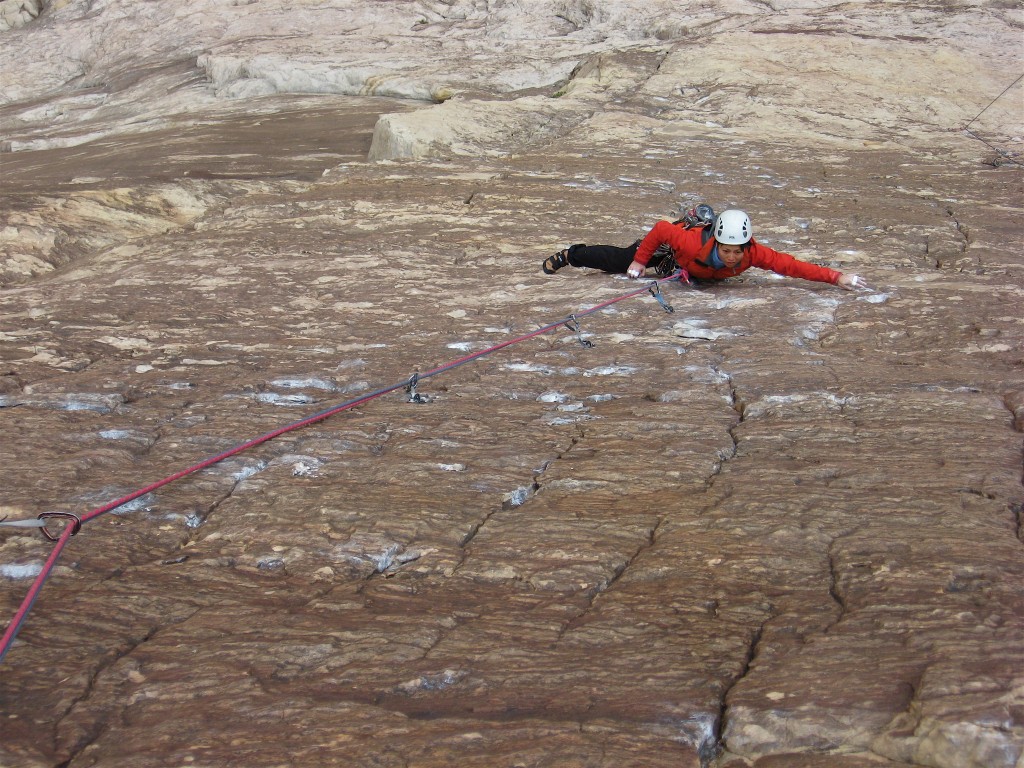 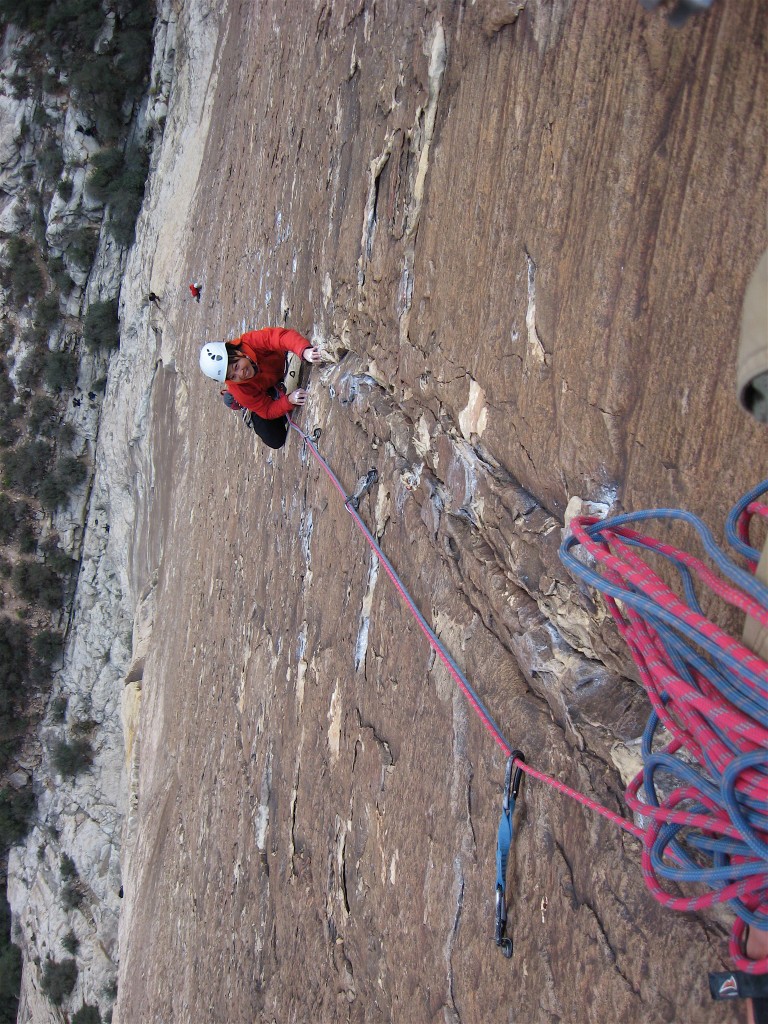 Shirley nearing the top of pitch 3 of Prince Of Darkness. Another party is starting up pitch 2 below (Nov. 2009). 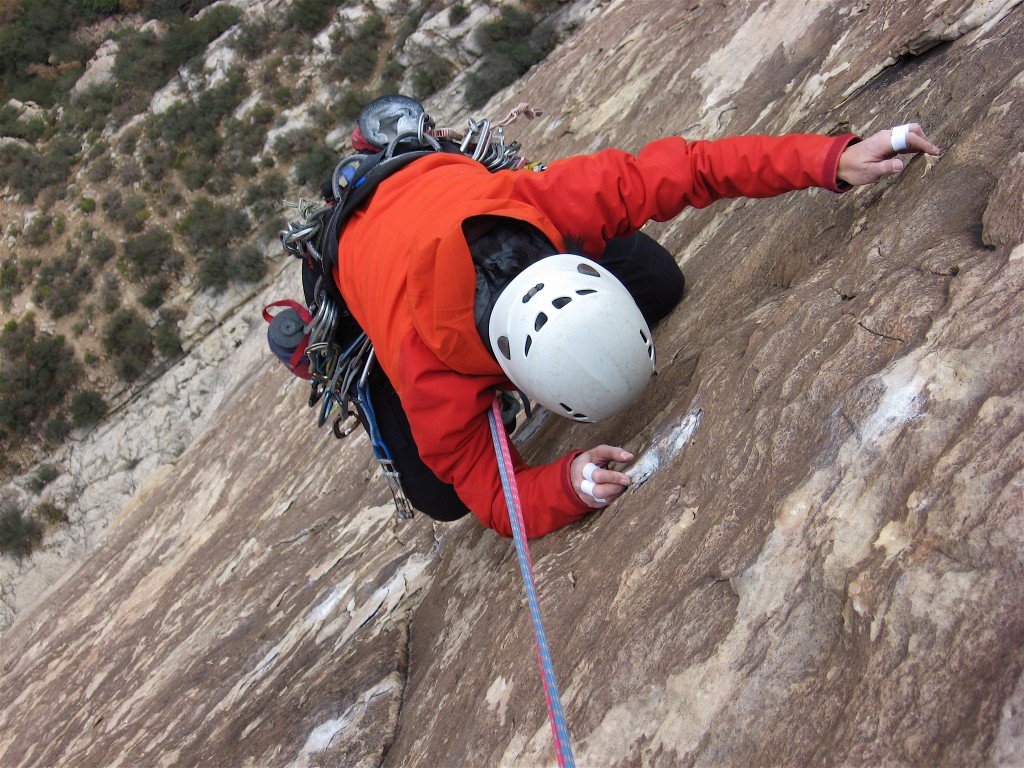 Shirley nearing the top of pitch 4 of Prince of Darkness on Black Velvet Wall....crimps all around - great fun (Nov. 2009). 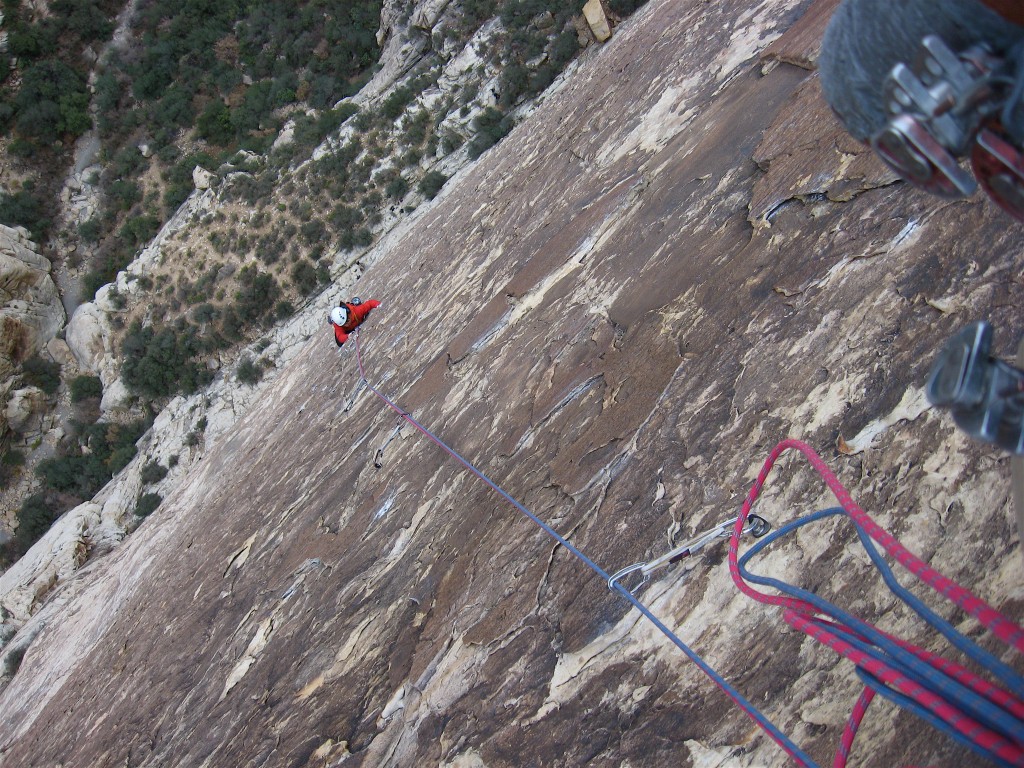 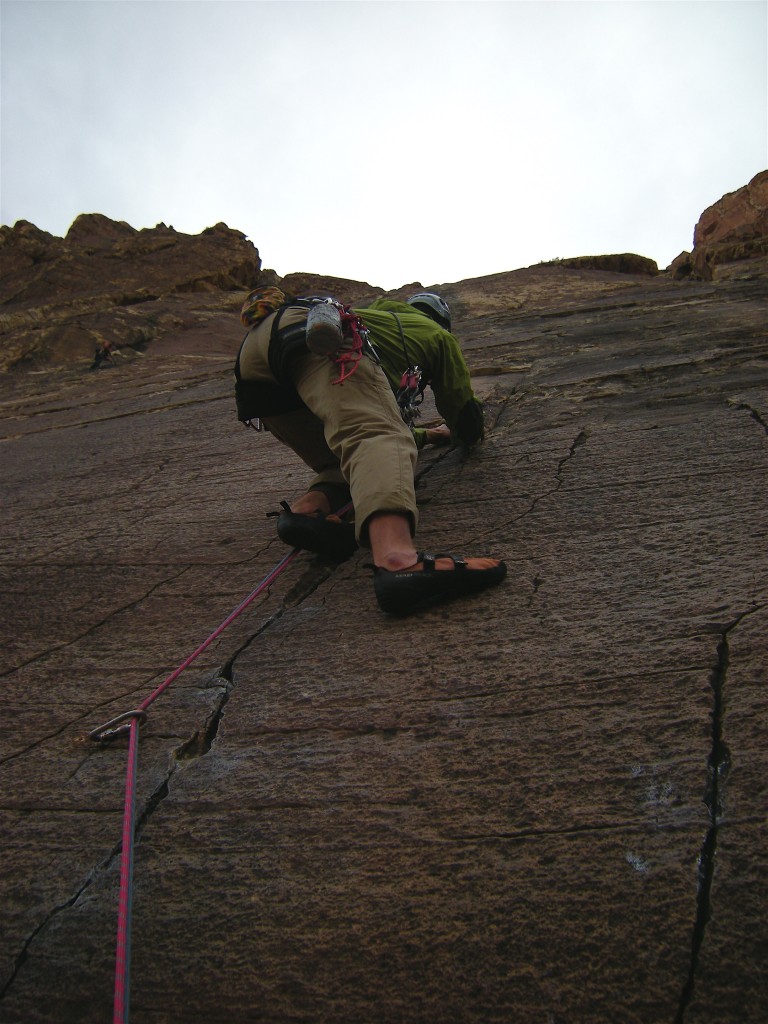 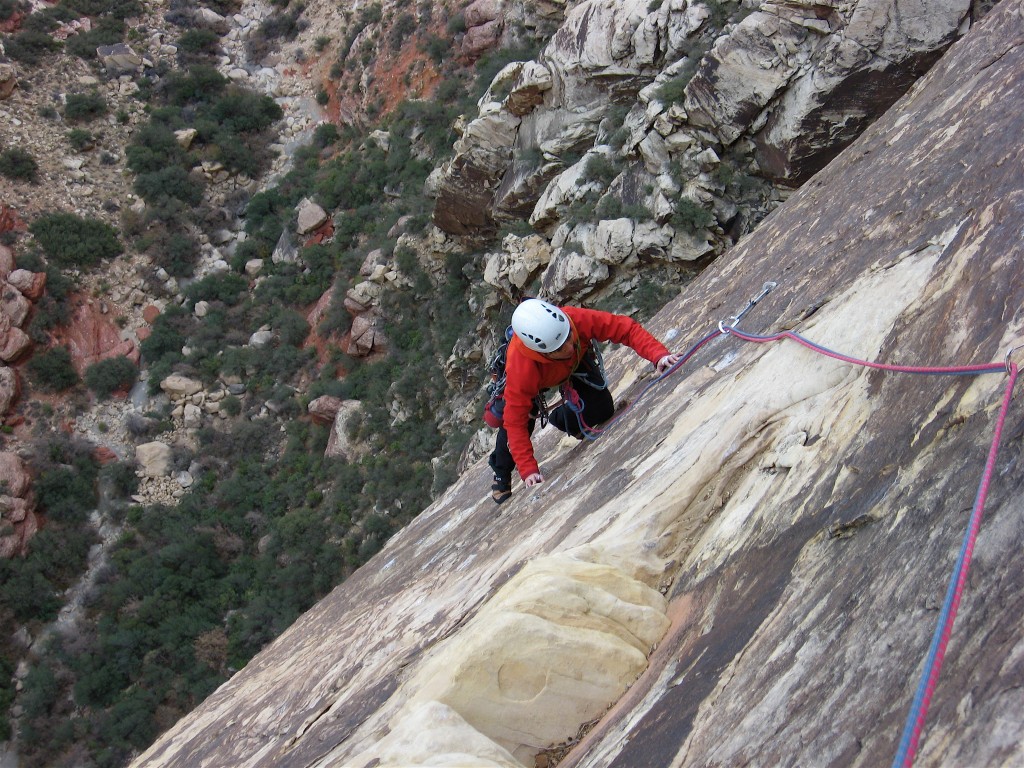 Shirley on the slabby finish of pitch 6 of Prince Of Darkness...this is the top of the route (Nov. 2009). 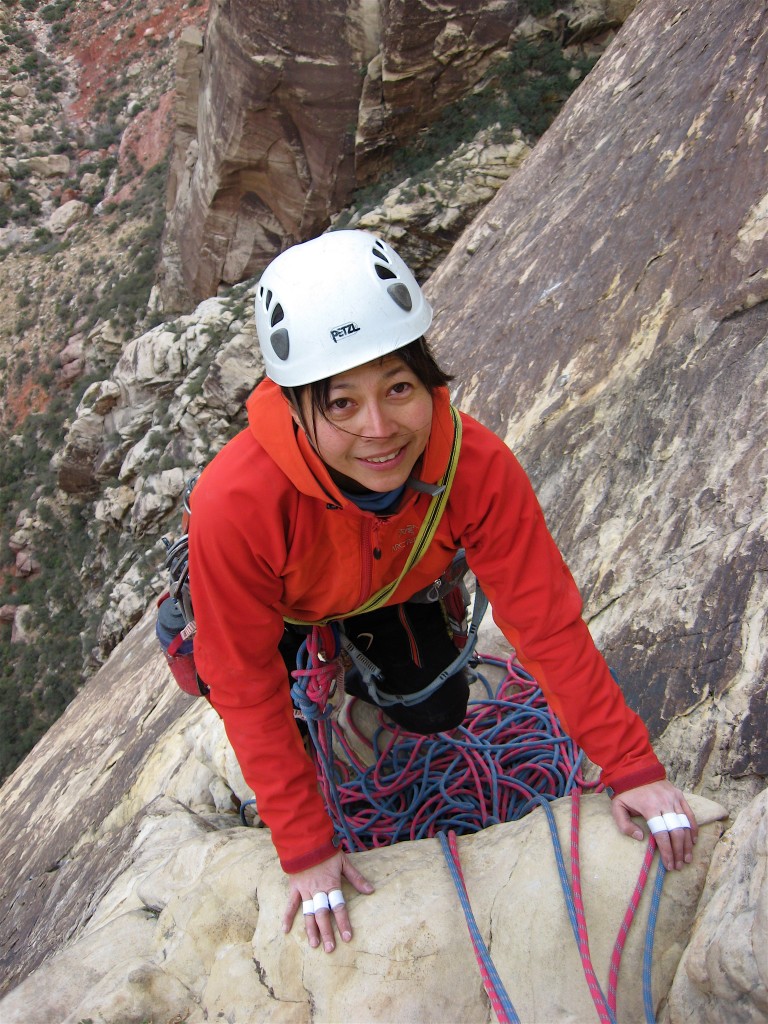 Happy Shirley topping out on Prince Of Darkness. Taped up fingers are Shirley's attempt at addressing painful tendons....for my painful tendons, I prefer a more traditional, far-eastern & ancient approach which involves massaging in fresh burro dung into the afflicted areas ideally under a void moon (Nov. 2009). 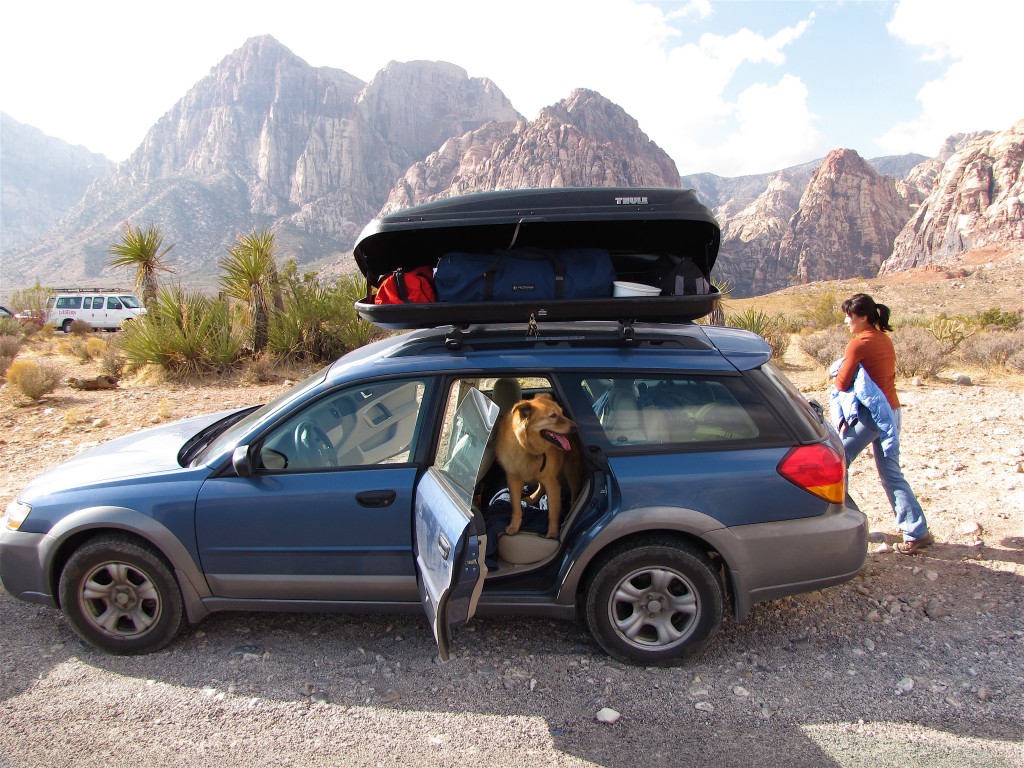 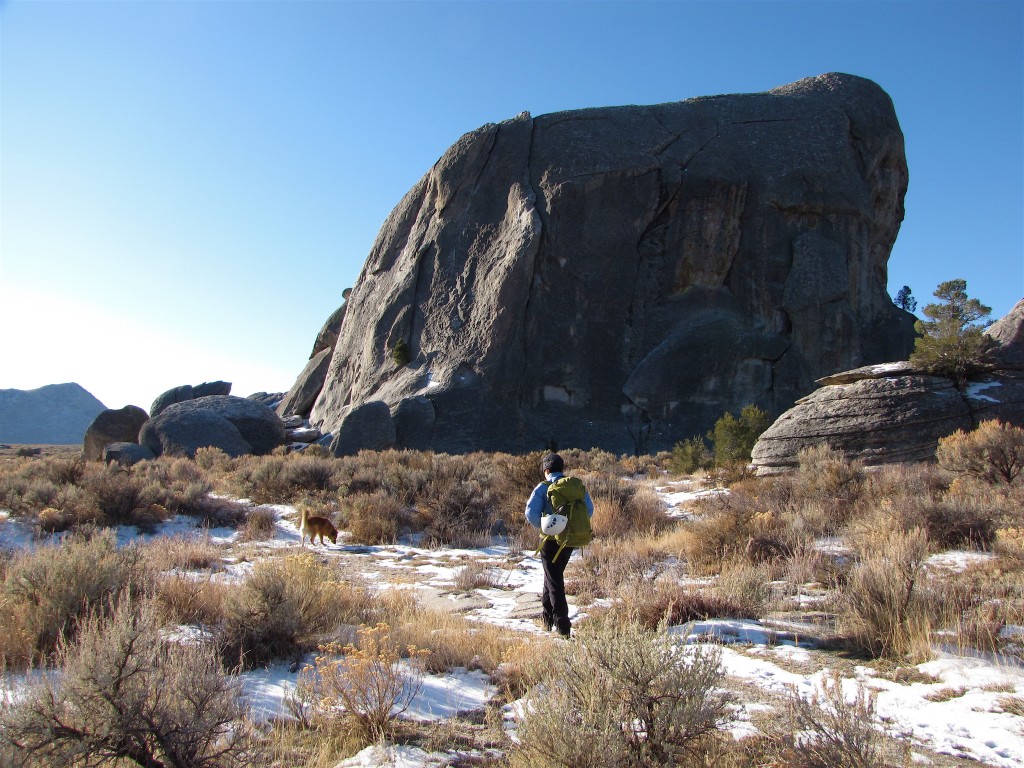 Shirley and Blondie hiking in to Elephant Rock in the chilly City Of Rocks...Thanksgiving Weekend 2009. 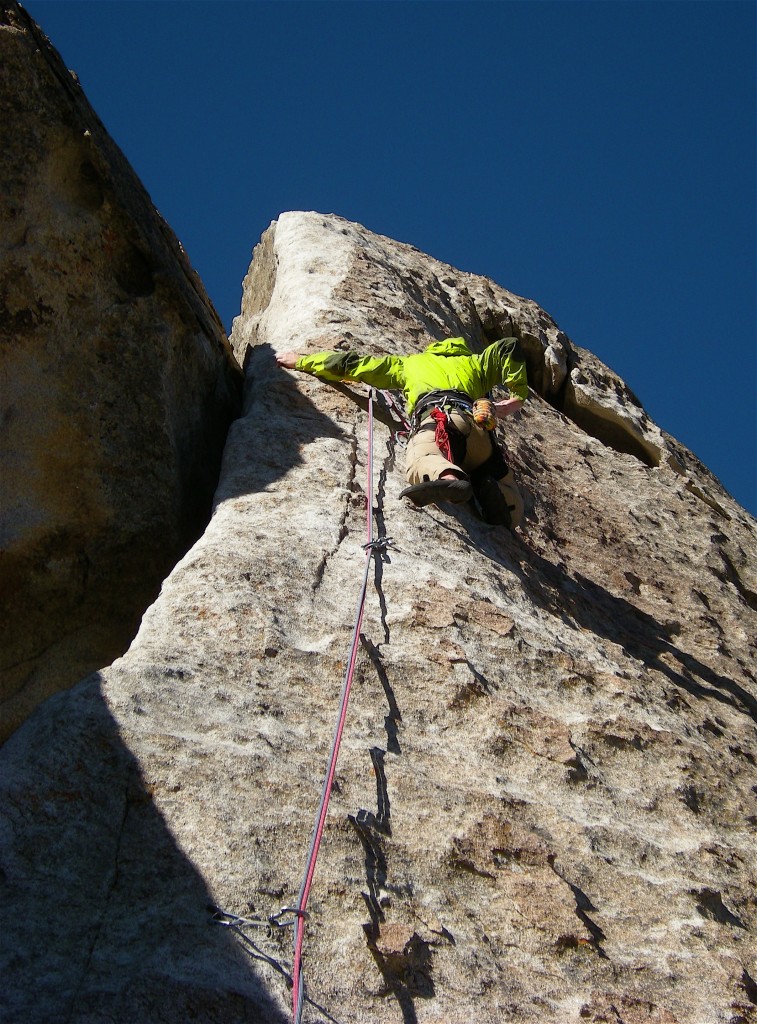 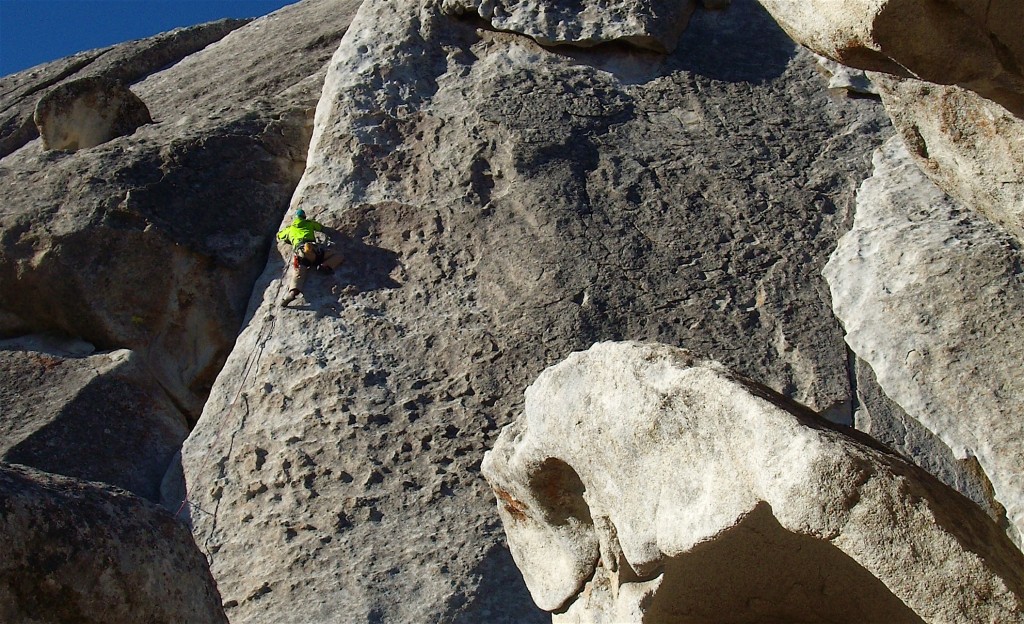 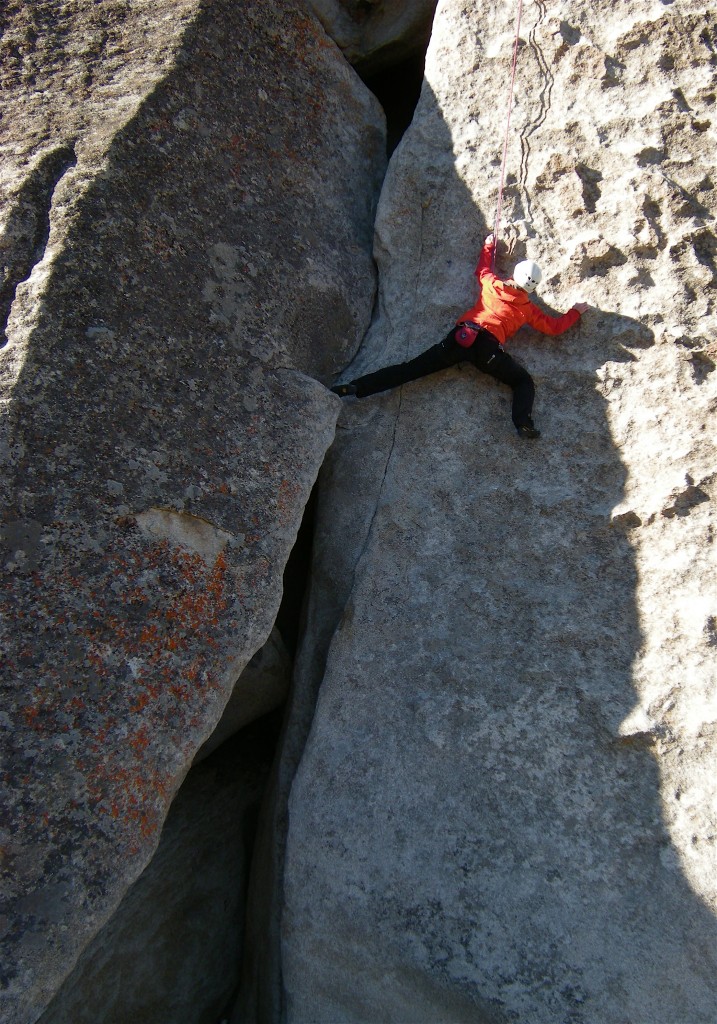