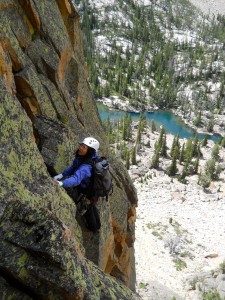 Keep on experimenting with an E-Perch route in a 2 day weekend from PDX. So far, zip. Hard to make the logistics work. It’s not really the driving (9-10hrs…well mostly it’s not the driving time). It’s the shuttle boat schedule. Yes, we are too lazy to hike the (boring-ass) lake shore for ~6 miles should we miss the shuttle boat. Renting a canoe would work well if we lived in say Boise . We are also probably too slow (at least for the route we’ve had interest in doing) to nail the climb & be back at the marina before the last shuttle boat leaves (7pm). We’d risk it but can’t really afford too many late-start Mondays at work. To salvage a bit of climbing, we started up The Tusk – a good looking formation two gullies over to the right of The Perch. No topo, no beta. An FA ambiance. We picked a line of least resistance (left side of ridge crest). Fun first pitch (5.8ish crack…I think shared with all routes on the formation?). OK second pitch (5.9ish). Short pitch 3 (5.9ish again with a bit of chunky rock but good pro). A short pitch 4 put us within a tempting reach of some bail tat among teetering blocks of granite. Was not clear how to proceed and so we bailed. In retrospect, we now know (pretty sure anyway) where the final pitch to the summit should’ve gone. We had company in the bailing – a party dropping off from The Tusk route (5.11?) complaining of old buttonheads protecting thin climbing. Their topo was hinting at the fact that we might’ve been on something called Ivory Coast (whereas the Original Line climbs the right side of the formation’s ridge). Oh well. Hiked out. Got home at 3am. 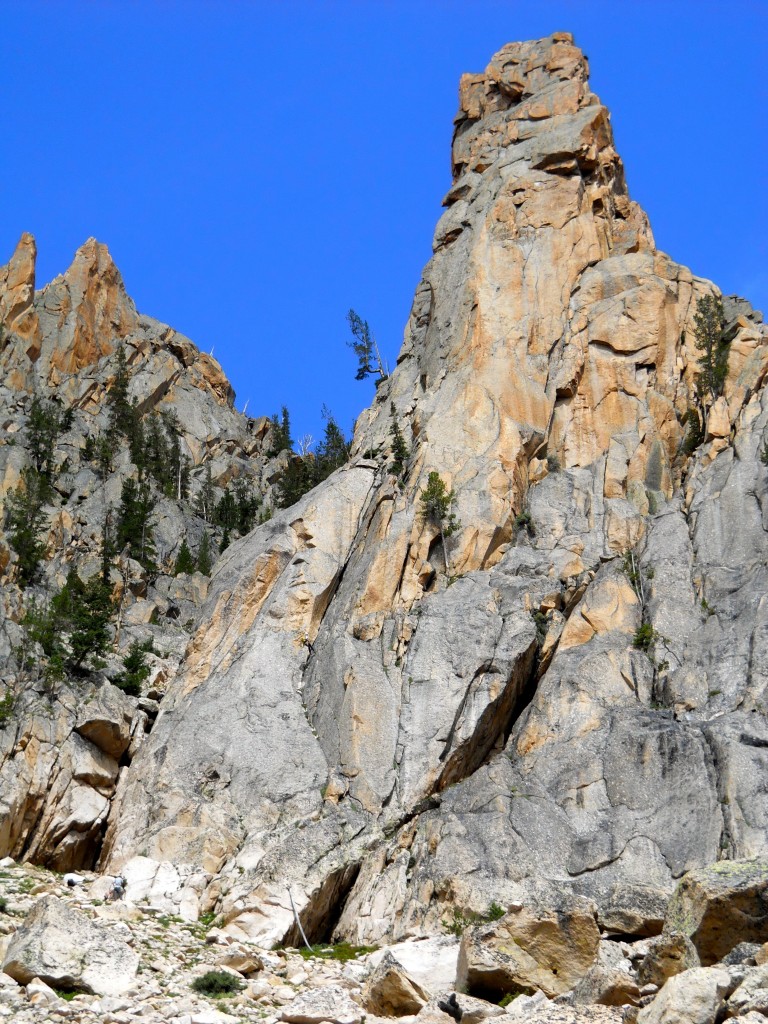 The southwest face of The Tusk towering above the lowest of the Saddleback Lakes. There's a climber rapping the first pitch (it was also our first pitch). Our line went up to the tree on the left and followed a left facing dihedral for 2.5 more pitches till we bailed in some loose block terrain. Think we missed an escape right at some point. Original line (reportedly 5.9) is on the right somewhere (Aug. 2011). 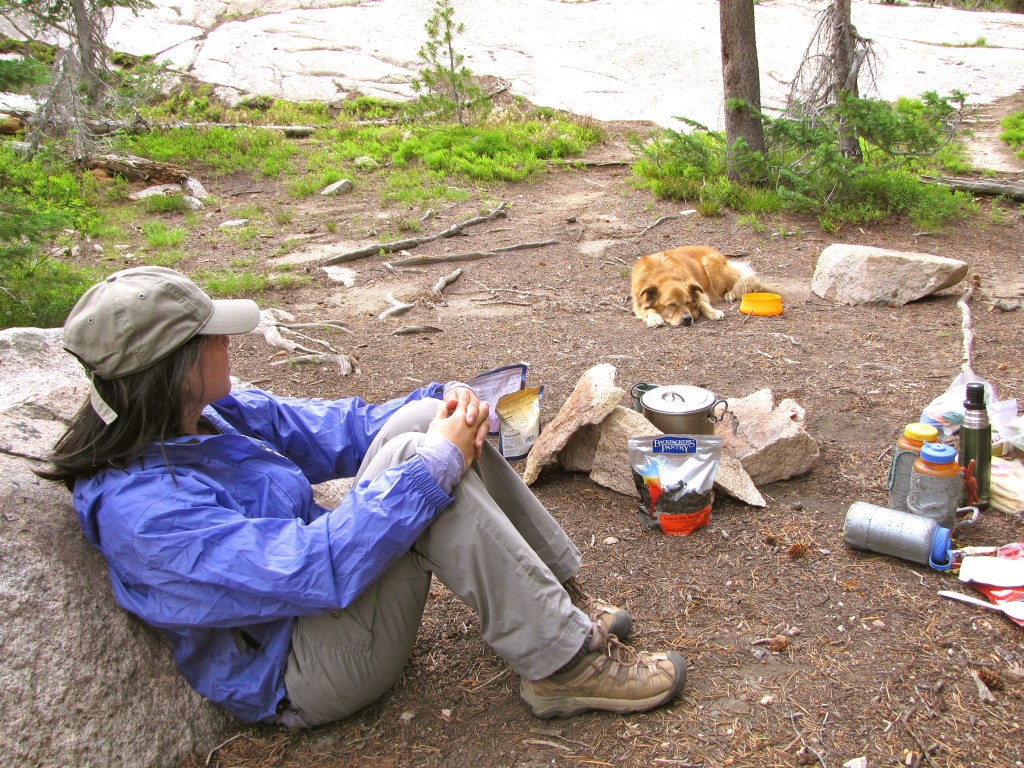 Shirley & Blondie chilling in camp by Saddleback Lakes. It was a VERY crowded weekend there (Aug. 2011). 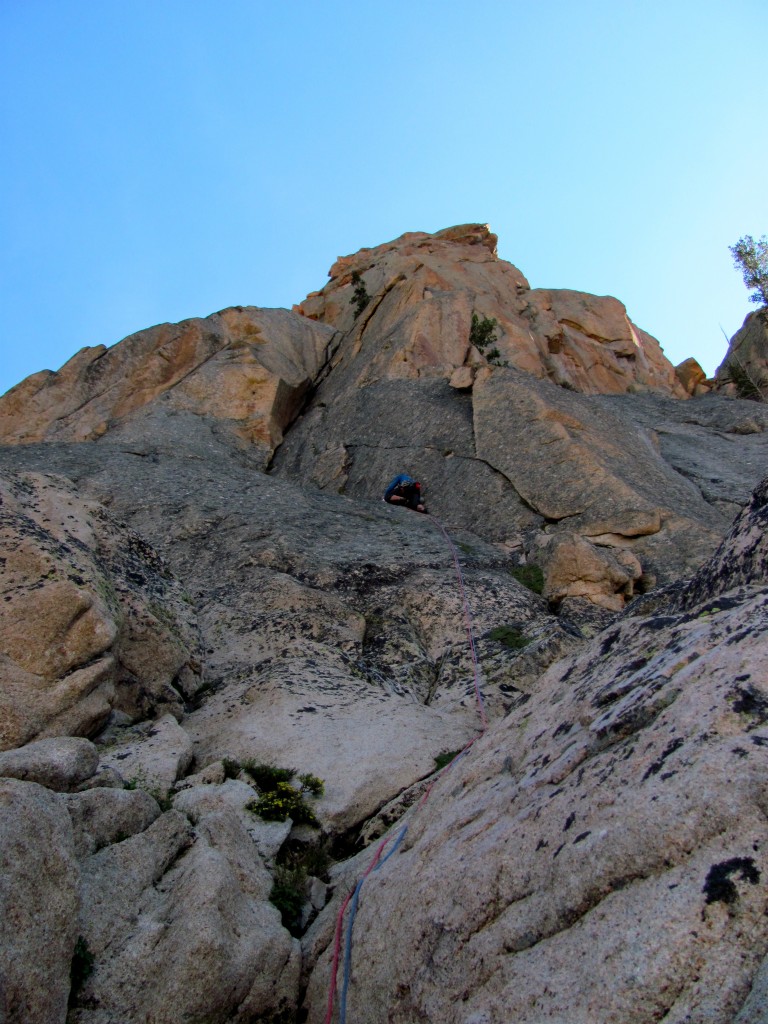 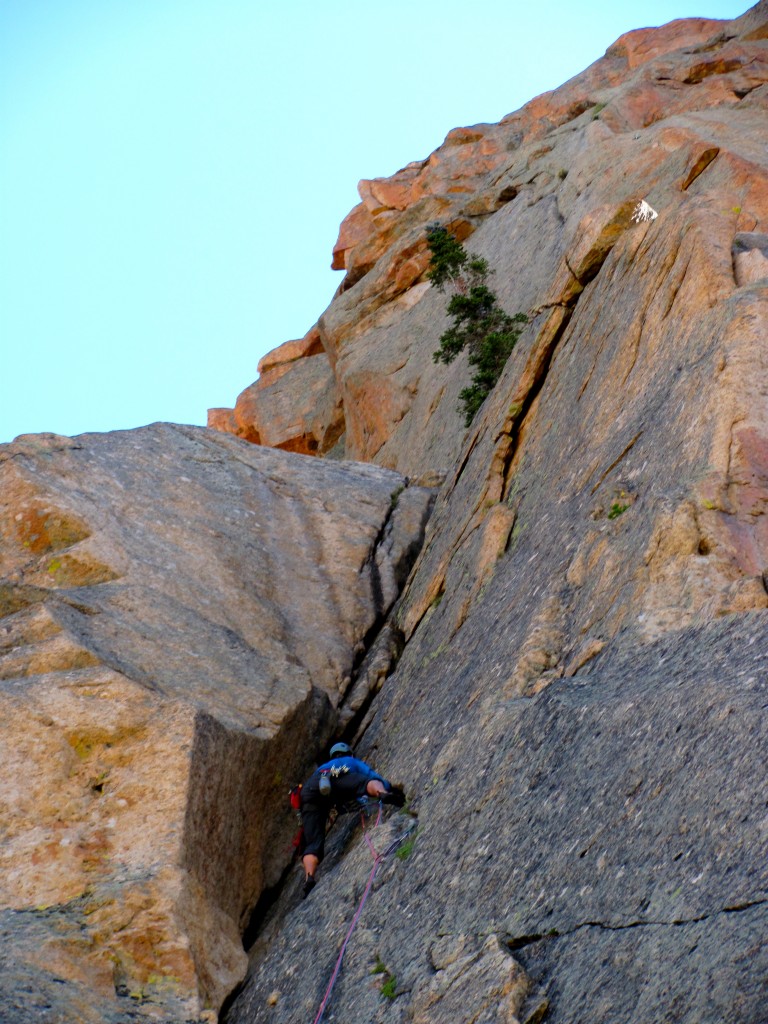 More pitch 1 scenery. The flaring chimney is avoided via a very nice crack on the right face (Aug. 2011). 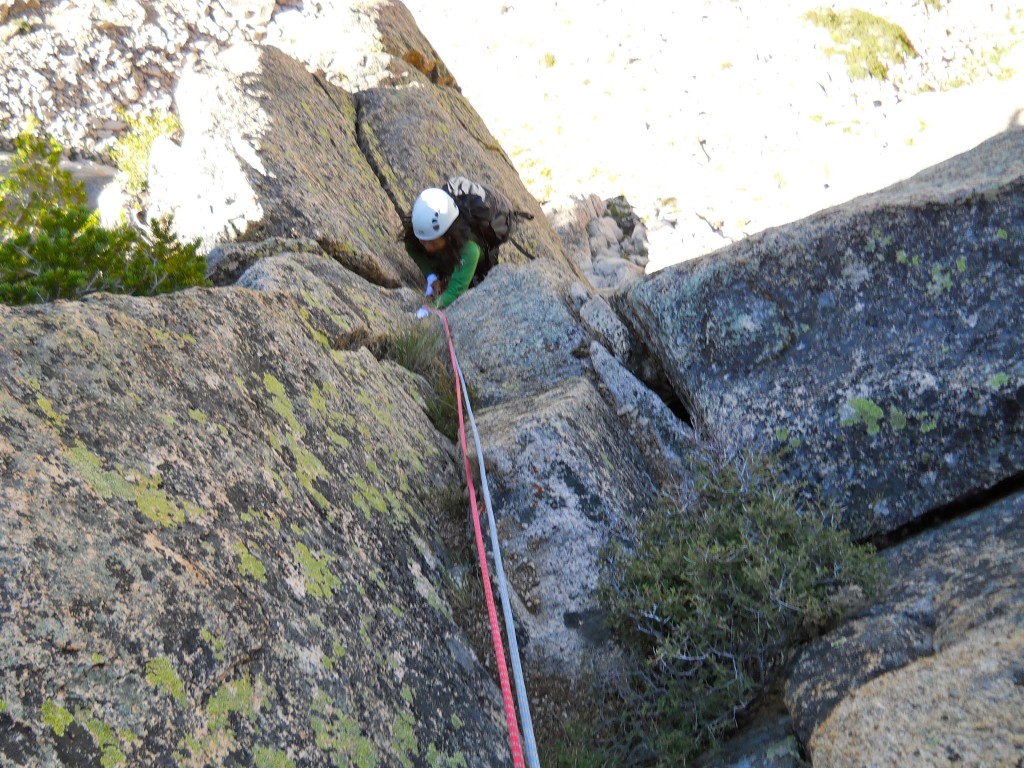 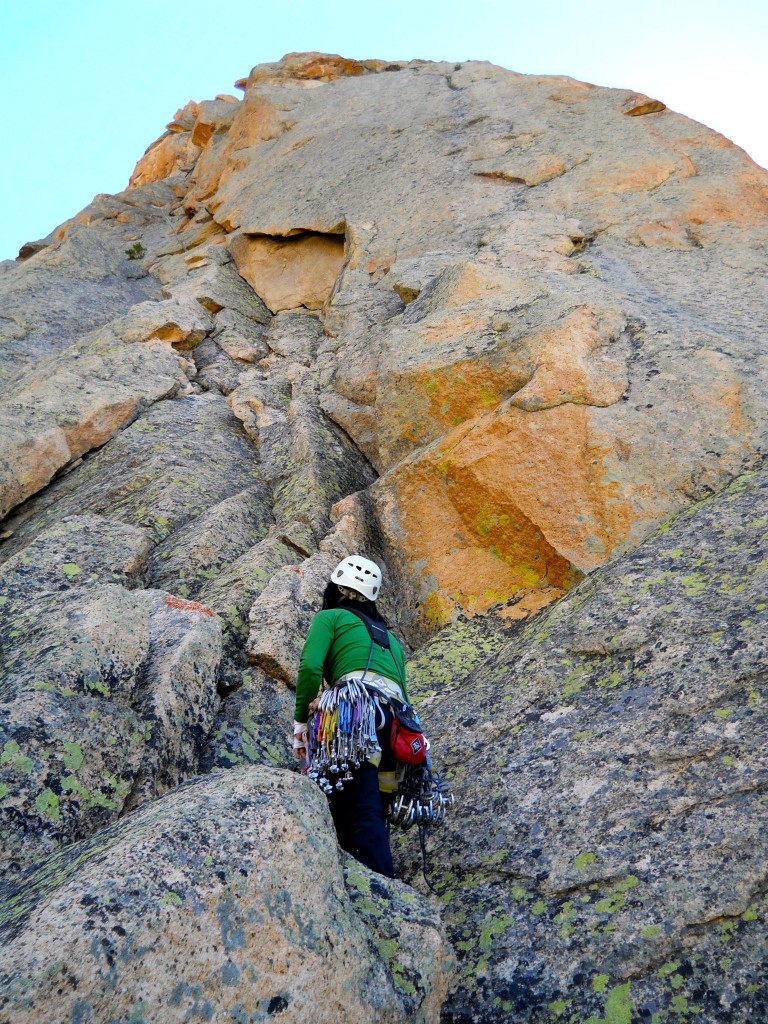 Shirley starting up our pitch 2 (5.9ish). We followed this left-facing dihedral a bit too far I think...should've found a way right at some point (Aug. 2011). 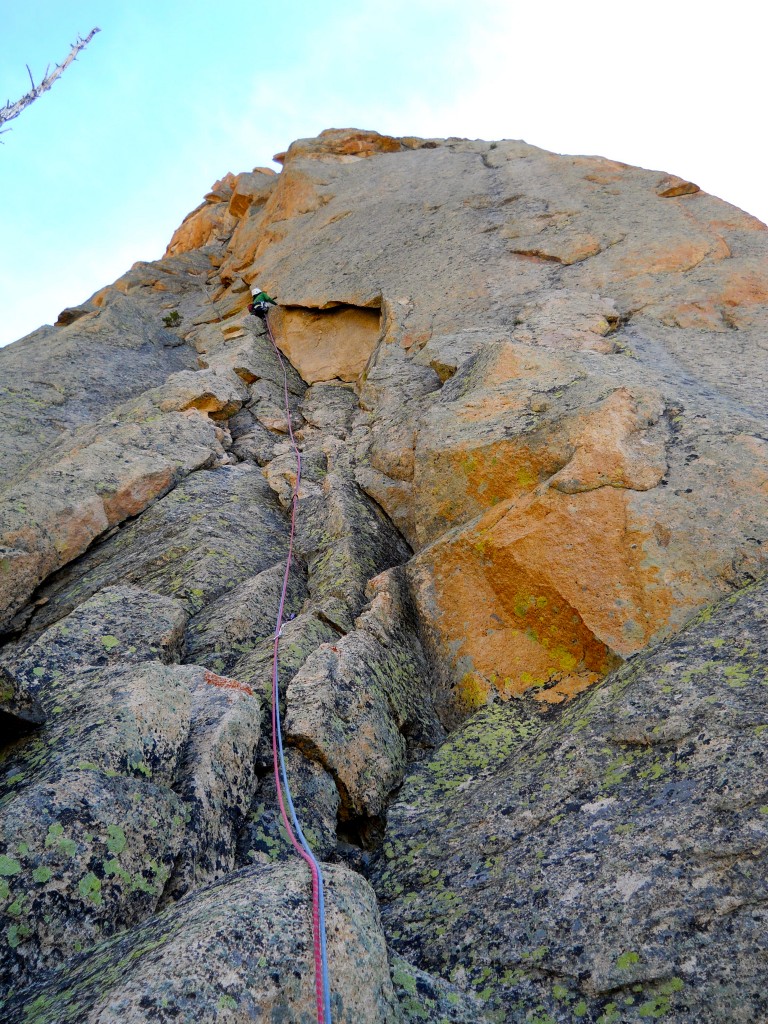 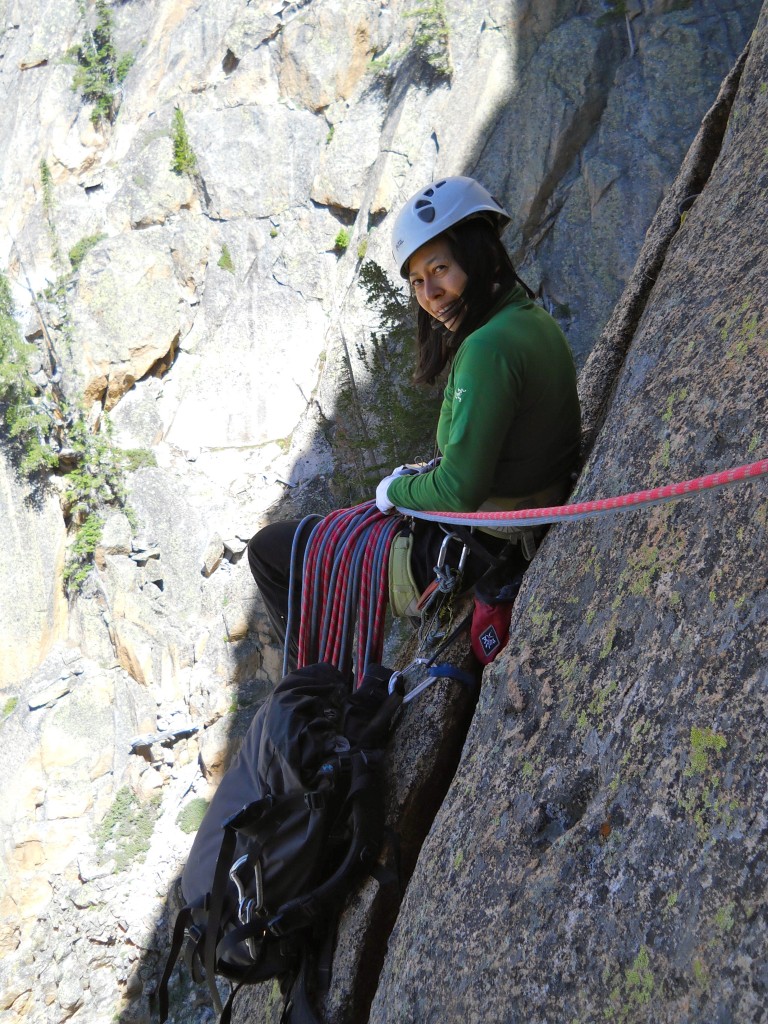 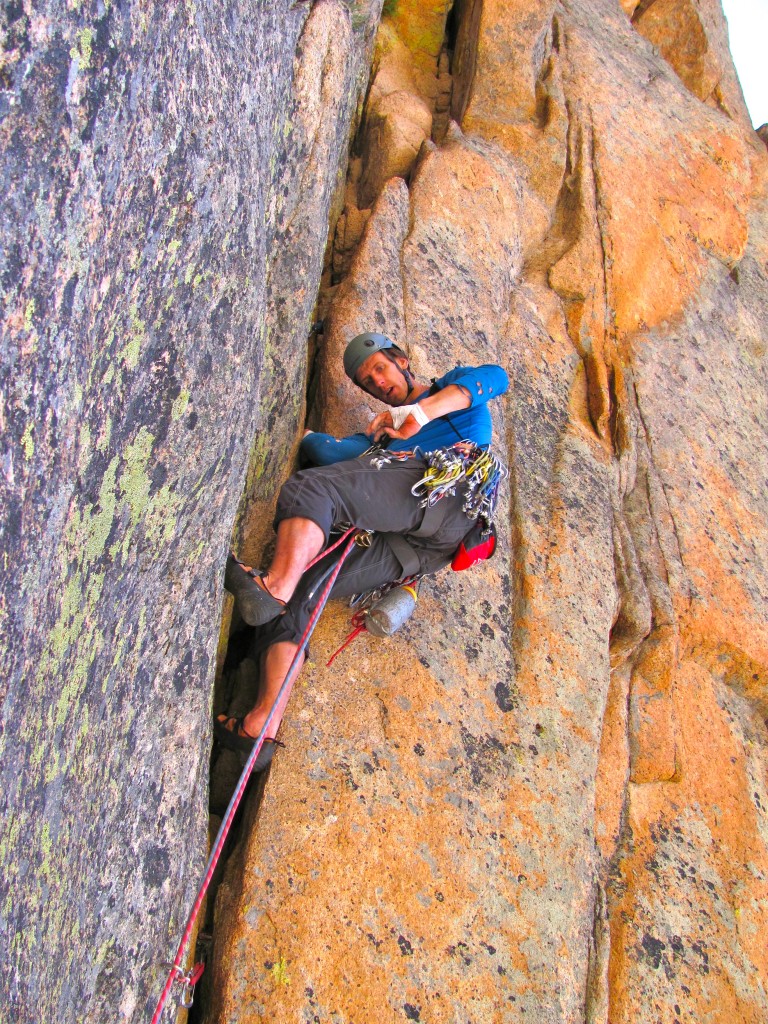 Starting pitch 3 of something or other on The Tusk...the camera was at a weird angle and things are only as steep as the plumb line formed by my hanging camalots would suggest (5.9ish; Aug. 2011). 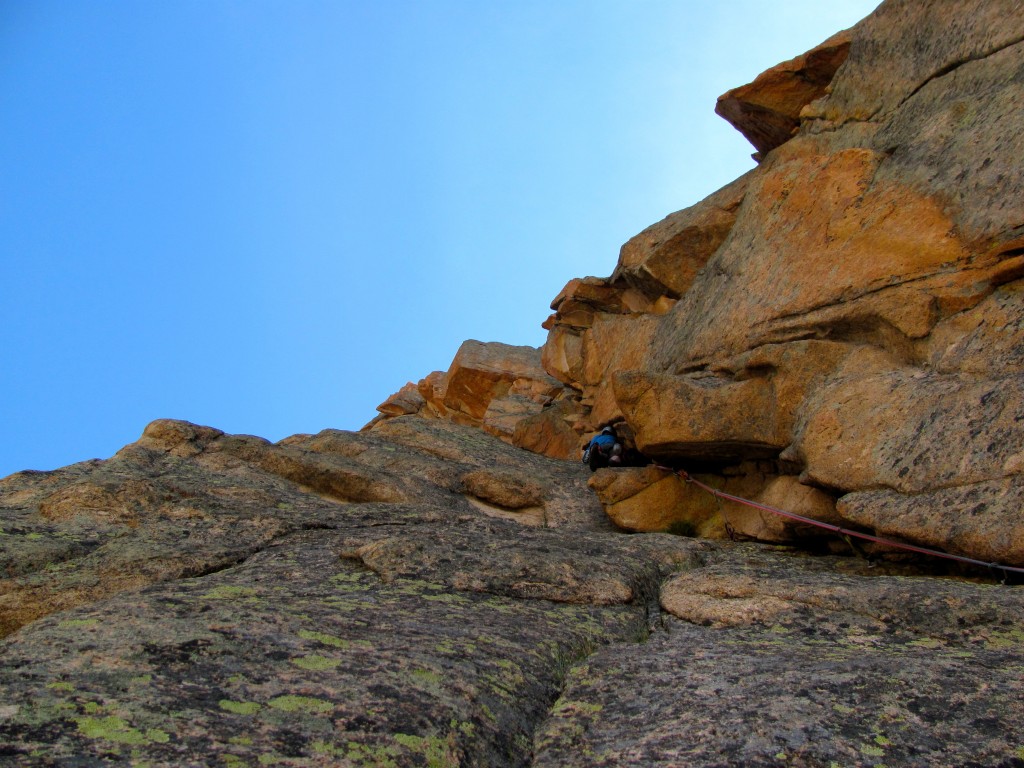 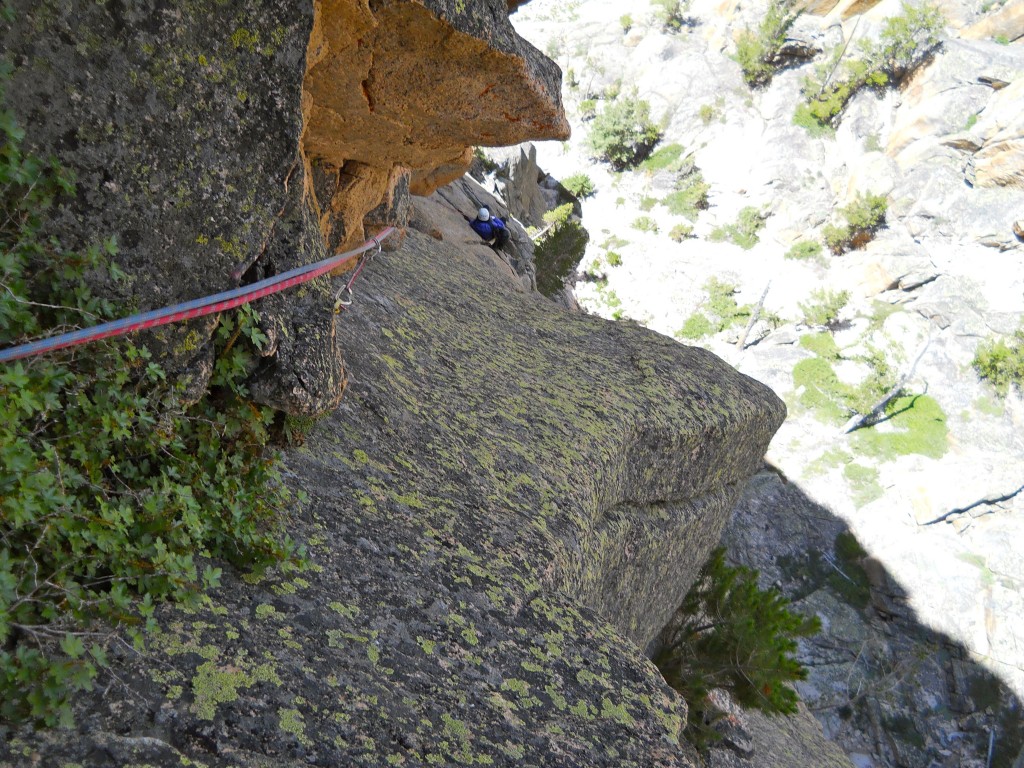 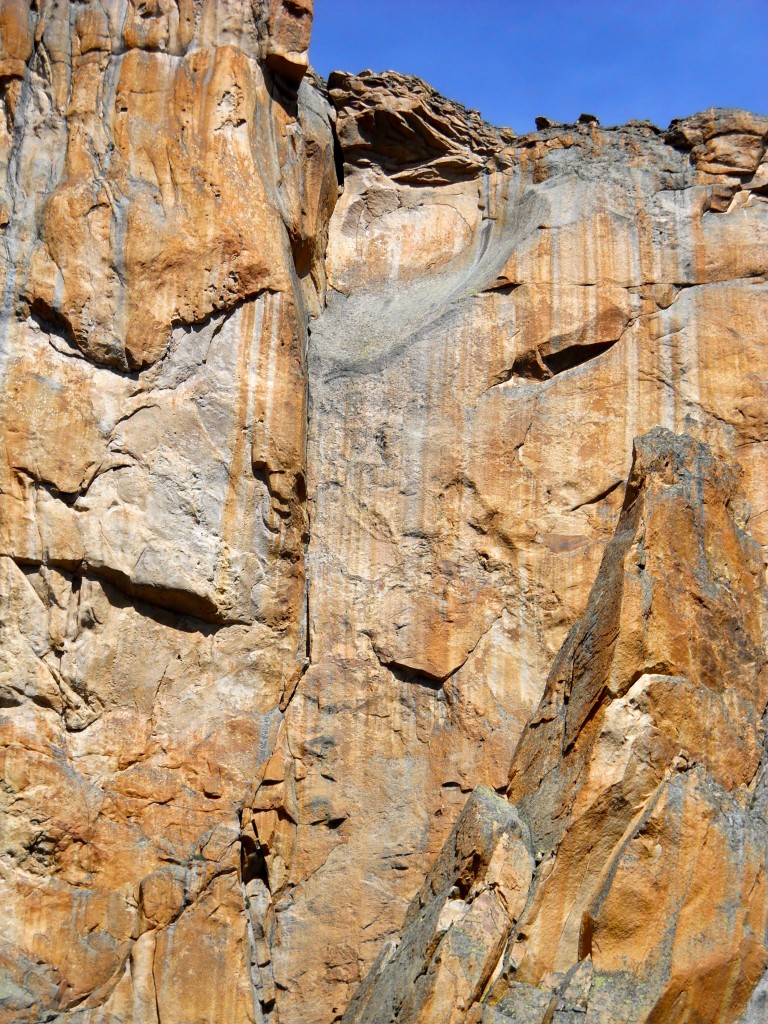 Sunrise Book route (III 5.10 C1) on Elephants Perch follows the obvious dihedral. Top of pitch 1 is barely visible but pitches 2-5 are in full view (the meat of pitch 3 is the dihedral proper, 5.10+ish). 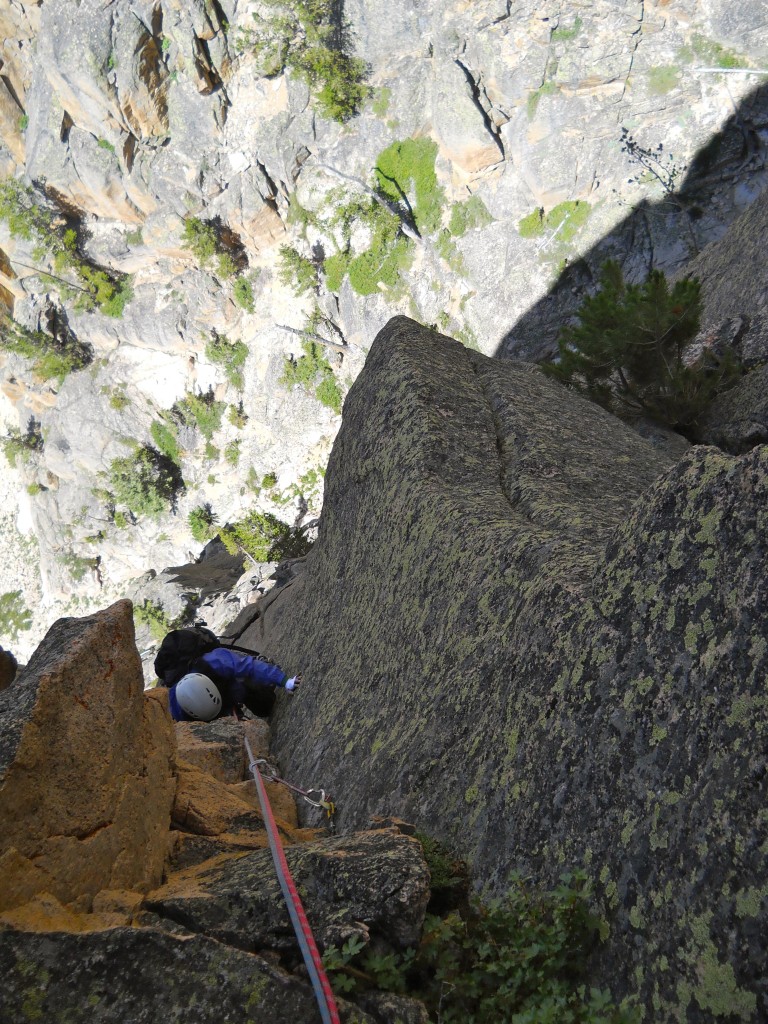 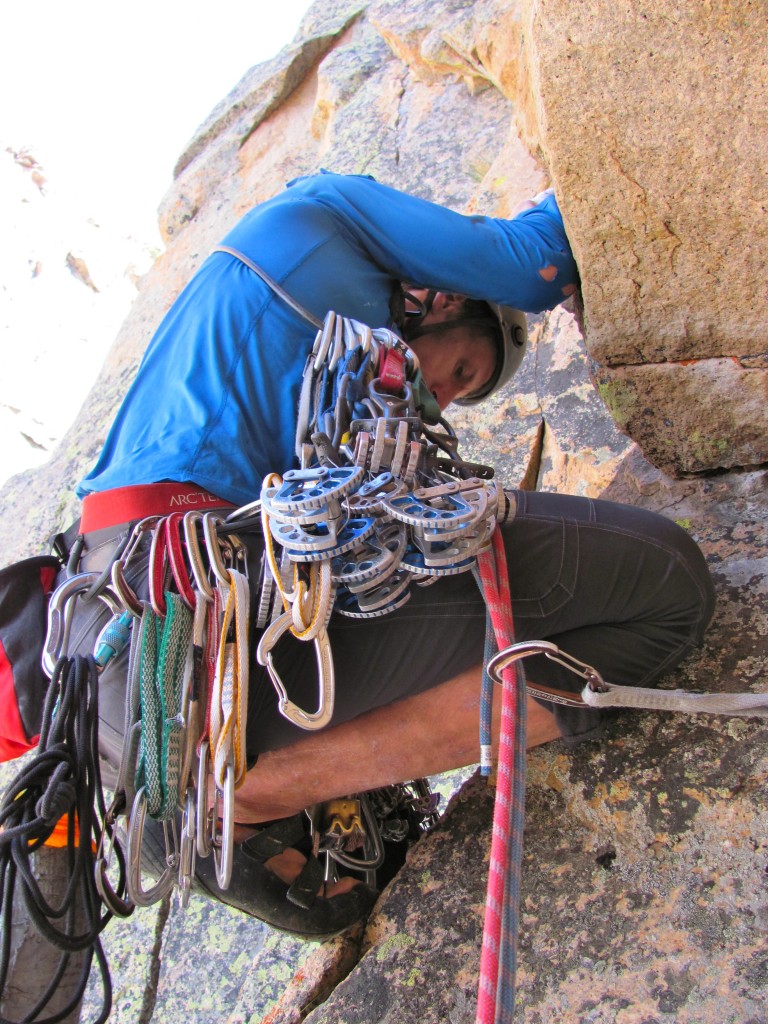 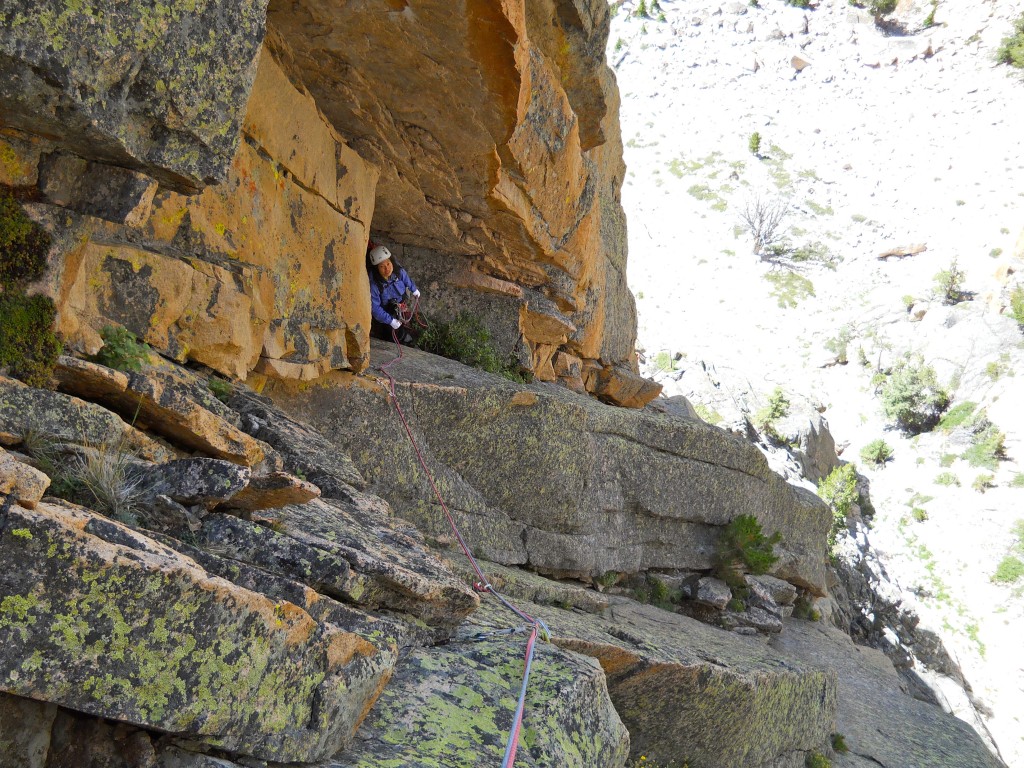 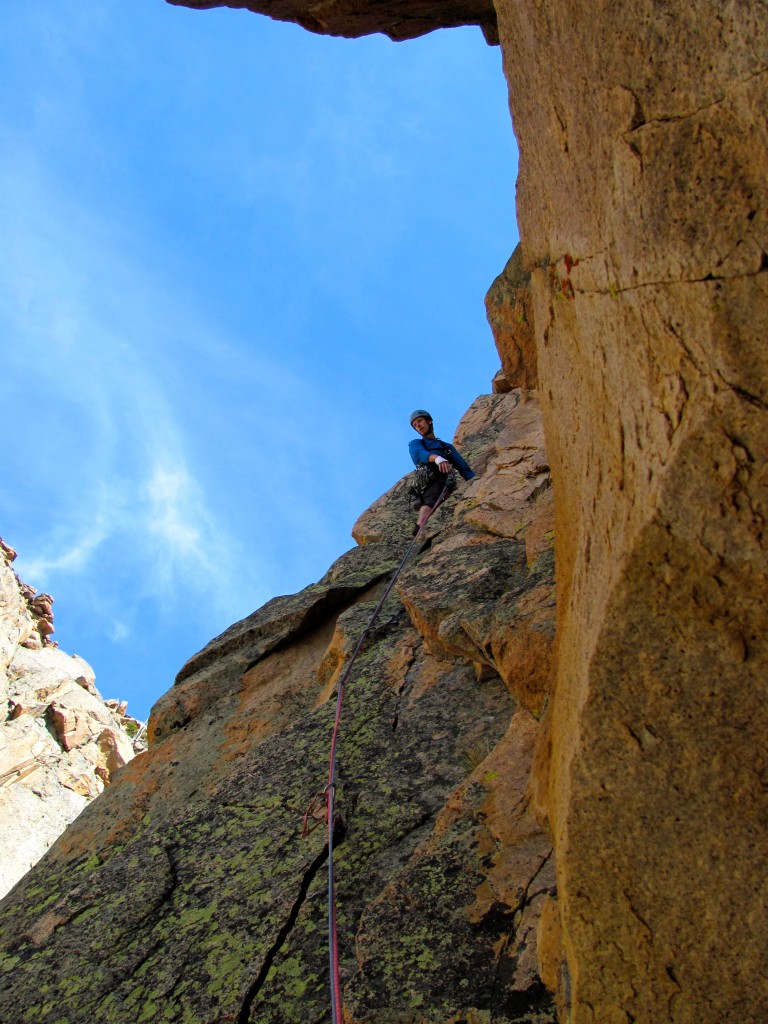 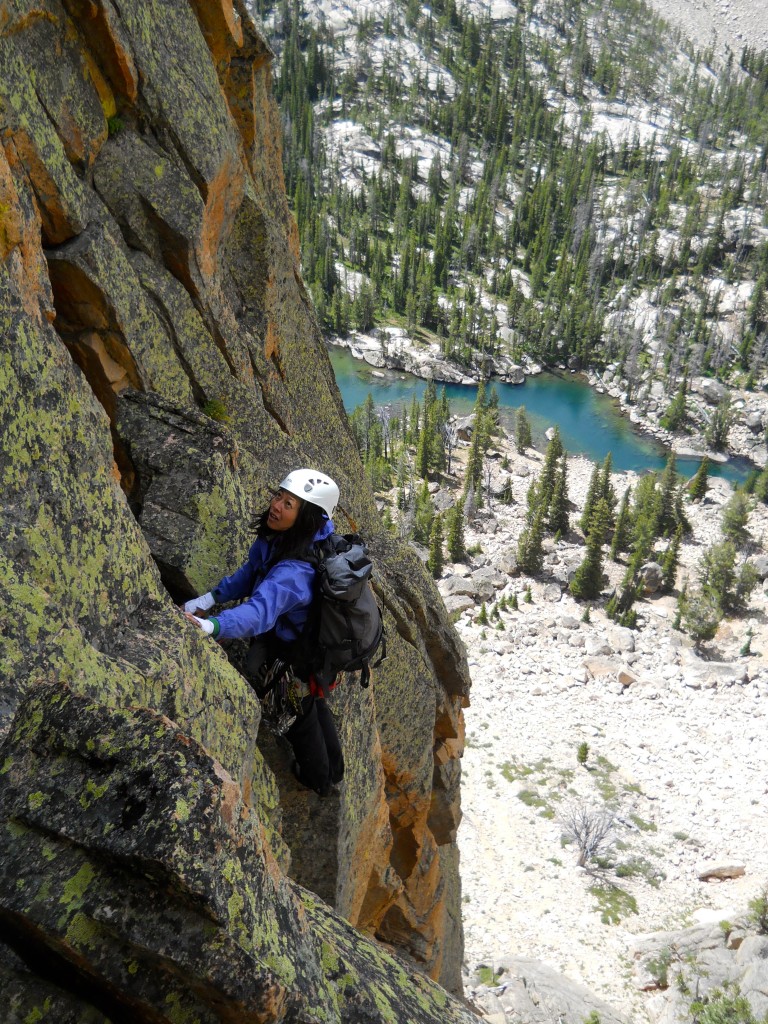 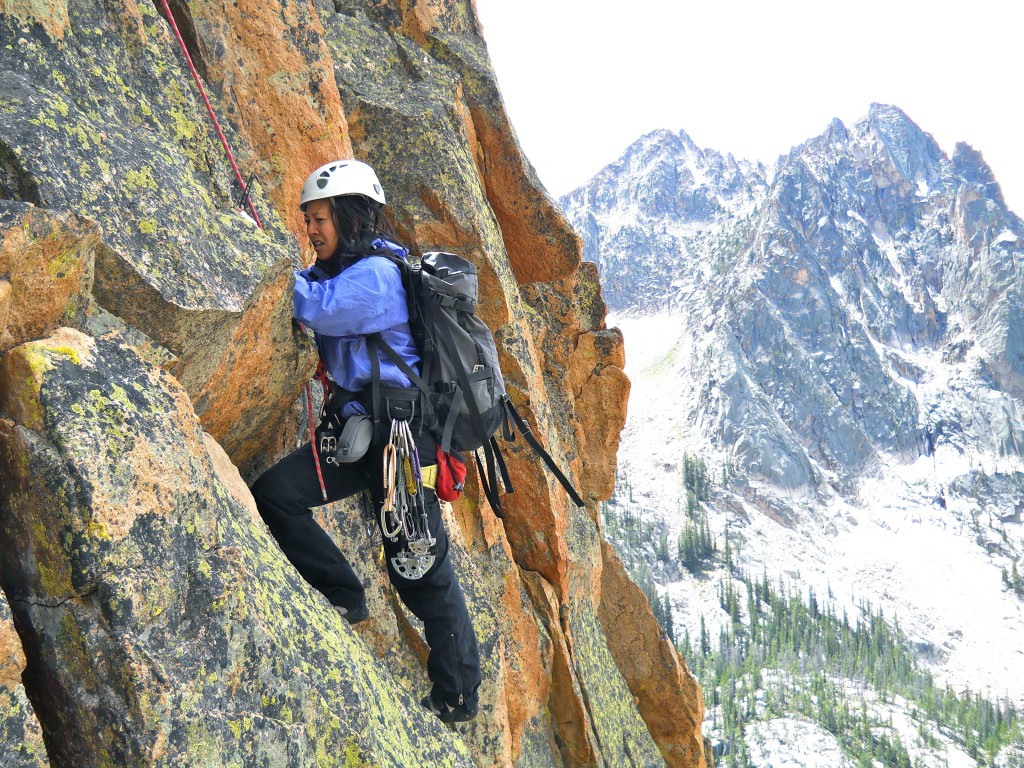