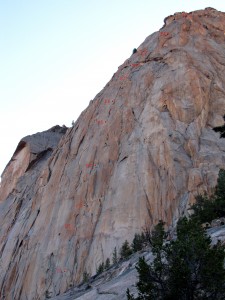 A three day weekend and the end cap of summer. What to do, what to do?! Thought about some multi-pitch limestone up in Alberta. Thought about the Wind Rivers in Wyoming. In the end, we both felt as though we’ve put too many tries into Idaho’s Sawtooths this summer to not walk away with at least one completed route. Packed a large rack, a load of food, and our huge tent, as Blondie is not too crazy about bunking it in the vestibule of our little 2 person tent & Shirley’s even less crazy about letting Blondie sleep inside. This was to be a fun-for-all sort of weekend especially since Elephants Perch on a three day weekend from Portland feels positively laid back. 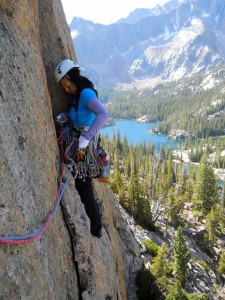 Shirley starting up pitch 3 of Beckey Direct...she did not care for the start of the pitch & after she gave me back the rack, I saw why (Sept. 2011).

After a more than sensible dinner, we hit the sack early and faded out quickly listening to another audio book courtesy of Shirley’s iphone. We had agreed with a couple guys earlier that evening that they’d start the route around 6ish in the morning while we’d be there at 7:30ish. As it turned out, we started climbing about 8:30 the next day and they arrived 20 minutes later. The first pitch was a fairly stiff cup of coffee even before the 5.11 roof. The start directly below the roof looked like it offered little in the way of pro for a while and so we started via a traverse in from the right. After getting a sense of the tips crack at the roof, I quickly went for some obvious nylon holds. The pitch was capped off by a balancy and handhold free foot shuffle on a nice ramp. Pitch two (advertised as the second hardest pitch of the day at 10c) was actually quite reasonable with the crux section consisting of about 20 feet of blue TCU crack in a dihedral though I almost pitched off at the very top (wide-ish). With those two out of the way, we were both expecting an enjoyable ride to the top (with nothing harder than 5.10- per our topo). We were wrong of course.

Shirley took the rack and traversed over to the start of pitch 3. After a couple minutes of finagling some thin cams in, she decided that she did not like the look of the terrain above and handed me the rack back. Holy f…ing thinness Batman! A black Alien went into the only piece of crack that was visible. Fortunately it was solid as I hung and swung off of it for quite a while & ultimately ended up pulling on the tiny f…er to gain the finger crack above. This Beckey Direct here obviously resides in a different universe, where things like Cruel Sister get a 5.8 rating and Last Chance perhaps a 5.9+. Pitch 4 was (I think!) one of the OK 10- pitches. Pitch 5 was a long one. Pitch 6 I believe started with a short but tight squeeze where I lost my traction & slid back down. Pitch 7 was another improbably thin crack nightmare where some old school (a.k.a. French) means were employed at the start. At this point we were already rationing our last bit of water. Setting out in the morning we thought more about chilly temps than scorching heat. The lower angle (5.7ish) pitch 8 was therefore a welcome sight. As was the following 5.8 pitch that put us next to the (very large) “Beckey Tree.” This was truly an oasis: a spacious ledge and a welcomed bit of shade! Pitch 10 wouldíve been a highly enjoyable 5.8 crack pitch had I not been so preoccupied with dry heaves and a solidly glued shut mouth. We combined the 3rd class pitch 11 with most of the final pitch (~5.8). We finally plopped on the summit some 15 minutes before the last scheduled shuttle boat of the day (7pm) was to leave the Redfish Lake marina (thinking back to our crazy idea of trying this thing on a regular weekend). We hiked down the familiar gully chatting with the two guys from the route. They were off to do Myopia the next day…oh to be young again!

Dinner in camp was followed by a mostly sleepless night (for me anyway…Shirley slept like a baby). Think I was too beat to sleep. Finally gave up and got up pre-dawn to catch the 9am shuttle boat. Back home in the late afternoon. 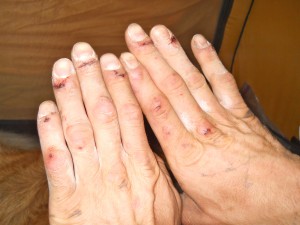 I think one word sums up the Beckey Direct for us: hard. Not just the 5.11 crux (aided) but the 5.10 cracks. Places that should not be too bad per topo were just improbably stiff! I think back to the Astroelephantroute and there seems to be little correlation in the rating of the 5.10- pitches between the two lines. Still, it is arguably the most handsome looking route on the Elephants Perch. A proud 12-pitch plumb line down the center of the golden granite wall. 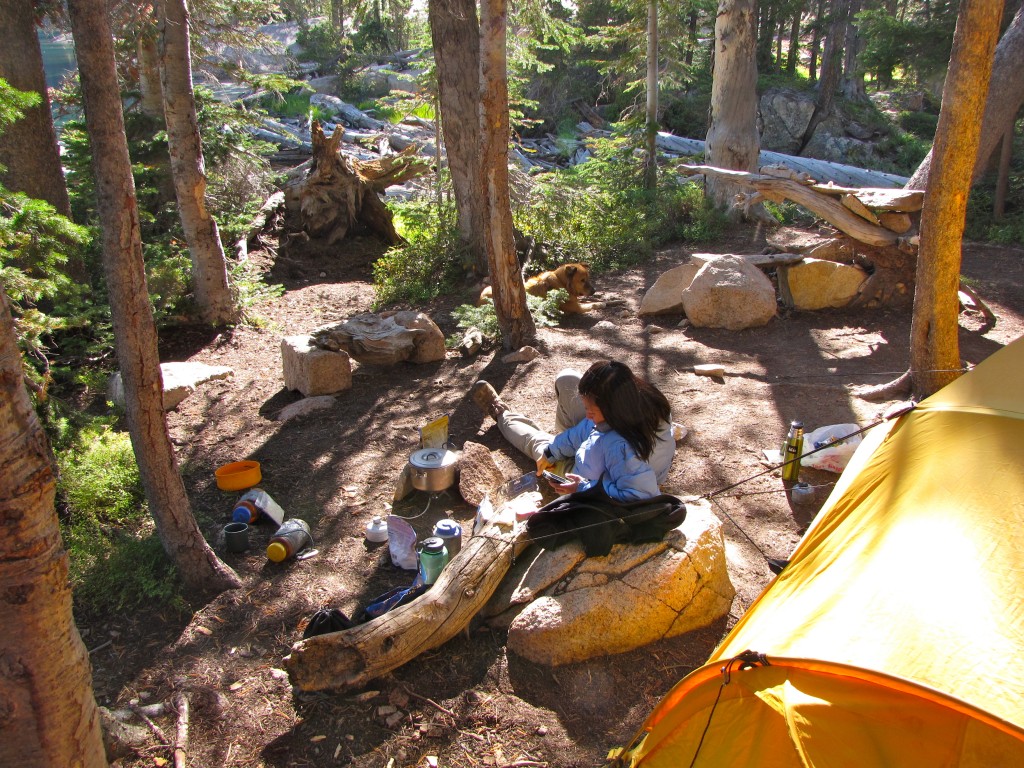 Shirley & Blondie relaxing in our camp at the base of Elephants Perch on the afternoon before our climb day (Sept. 2011). 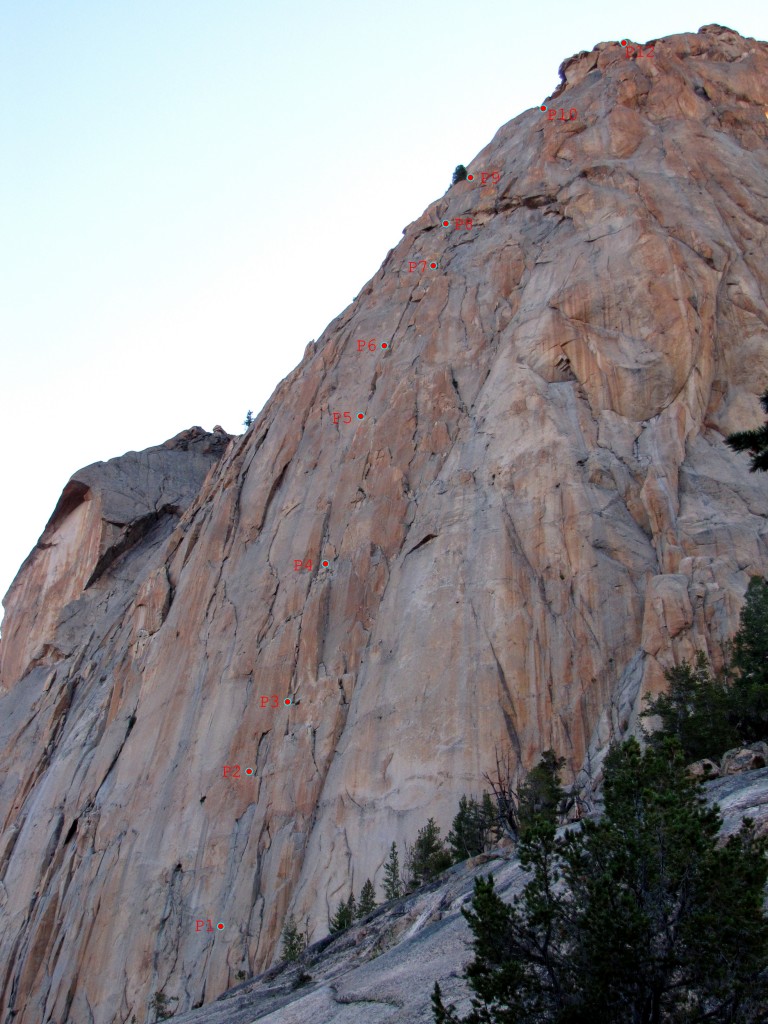 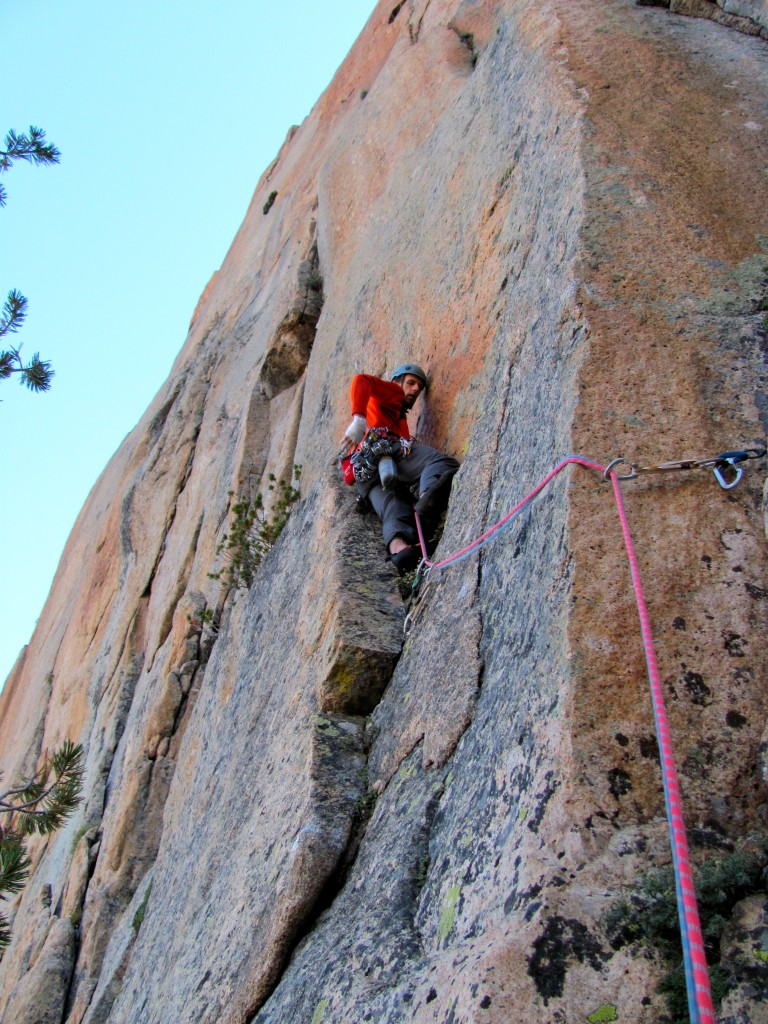 Starting up the first pitch of Beckey Direct. Perhaps a variation as it looked more appealing than the direct to the direct (Sept. 2011). 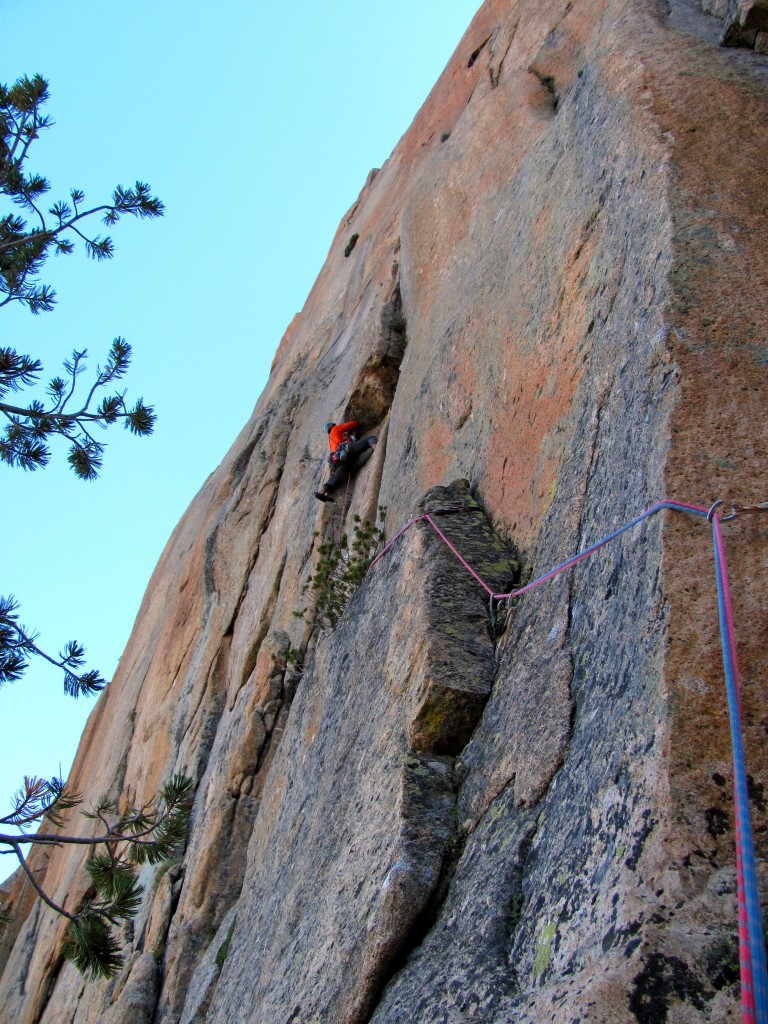 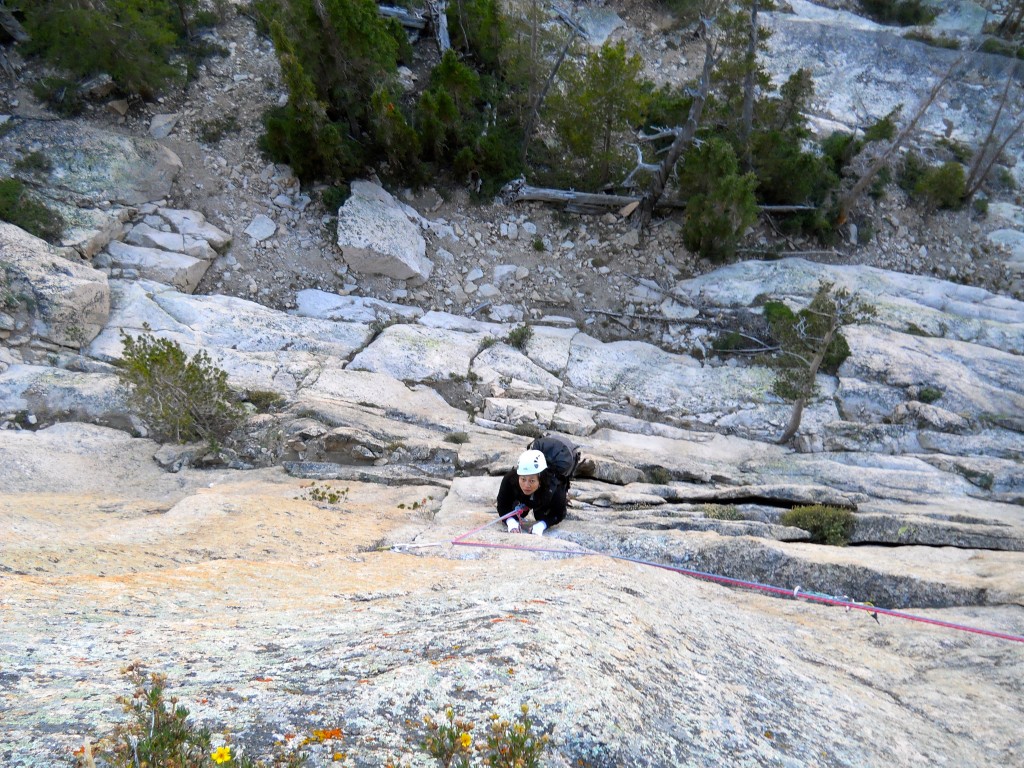 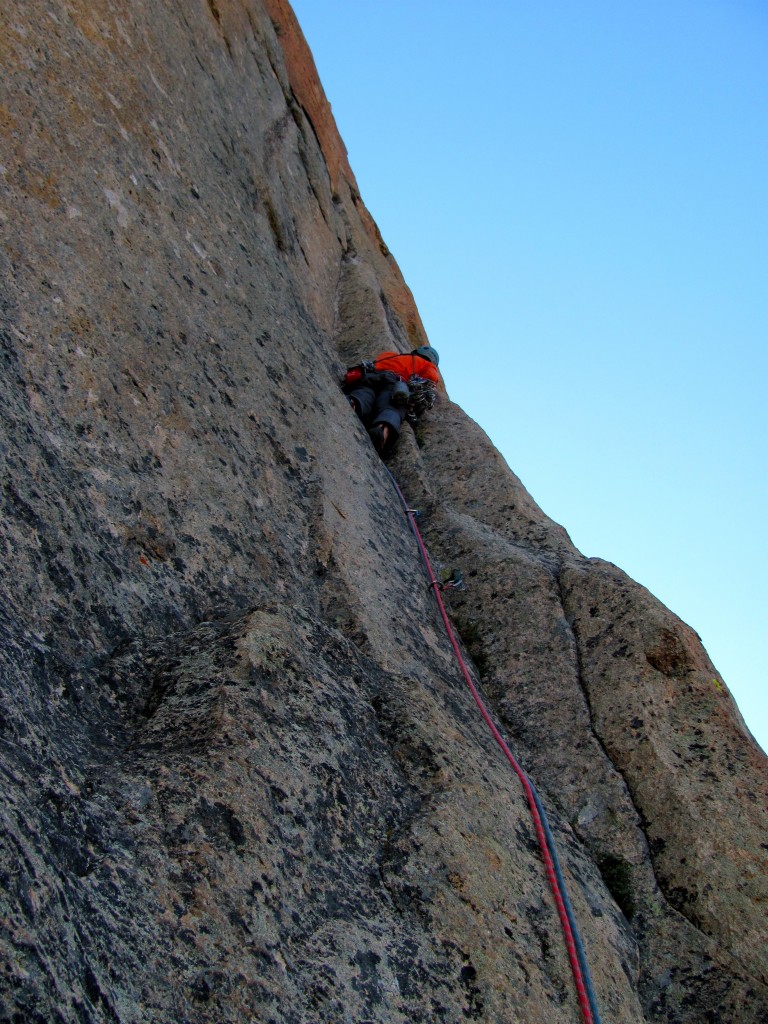 Starting the lead of pitch 2 of Beckey Direct - some easy ground leading to a thin tips crack for ~20 feet followed by some steep crack of variable size (Sept. 2011). 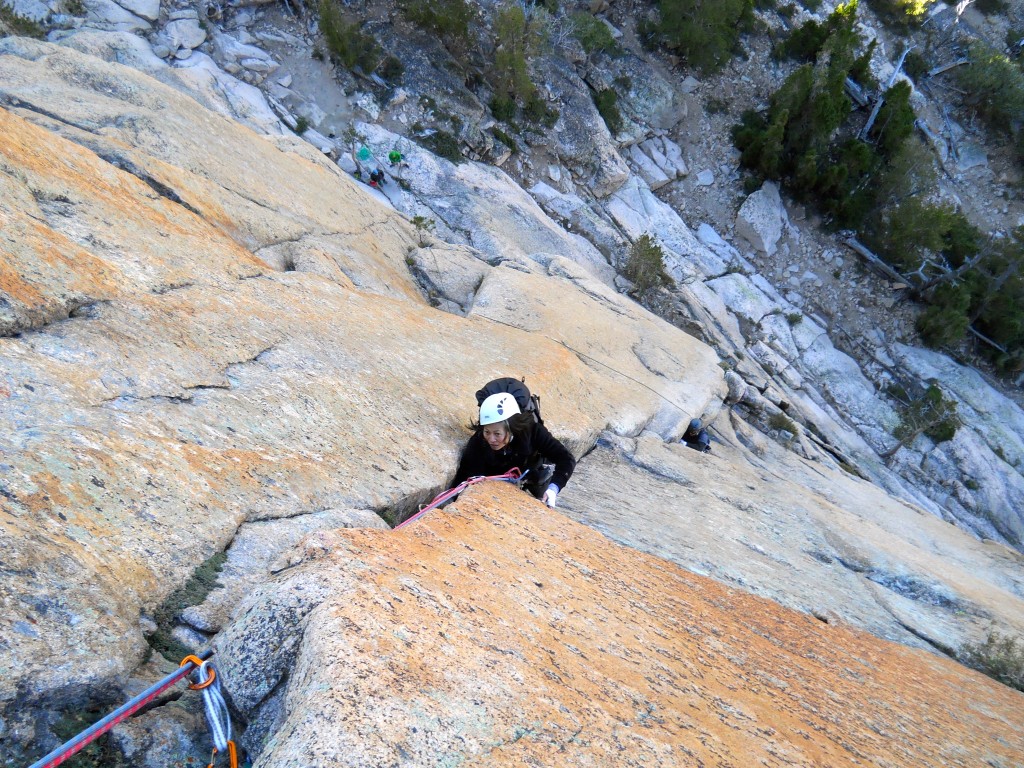 Shirley nearing the top of pitch 2 of Beckey Direct...we both thought the hard climbing was largely below us at this point. Not so. Some of the 5.10- pitches were harder for us than this 5.10 pitch here (Sept. 2011). 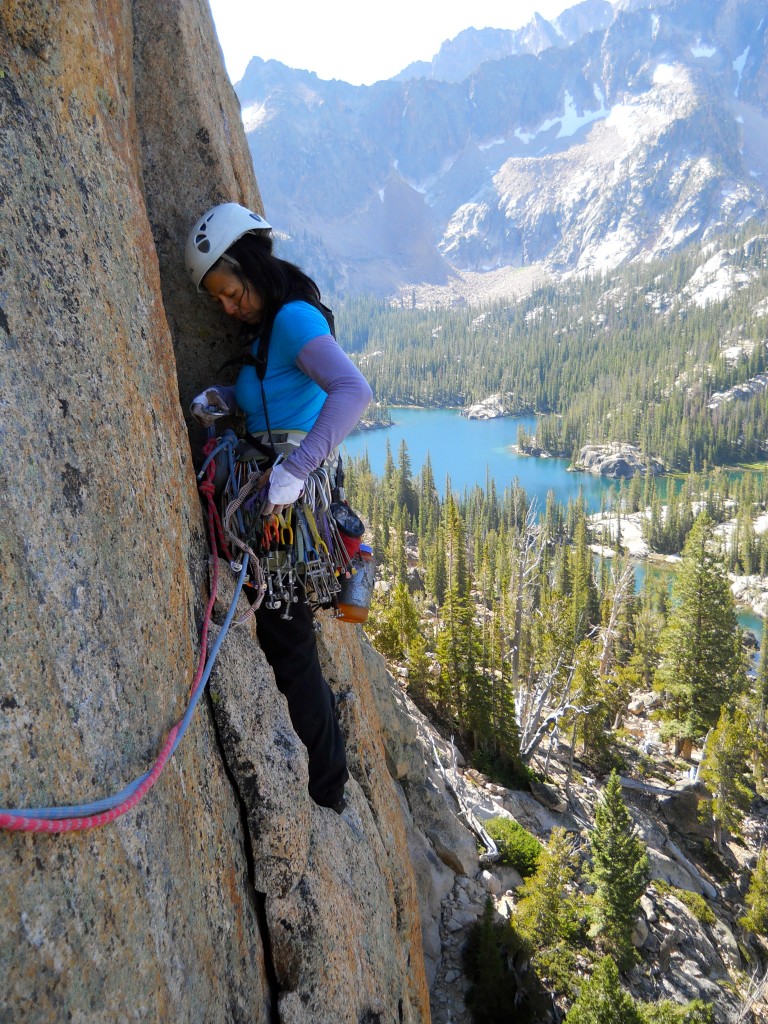 Shirley starting up pitch 3 of Beckey Direct...she did not care for the start of the pitch & after she gave me back the rack, I saw why (Sept. 2011). 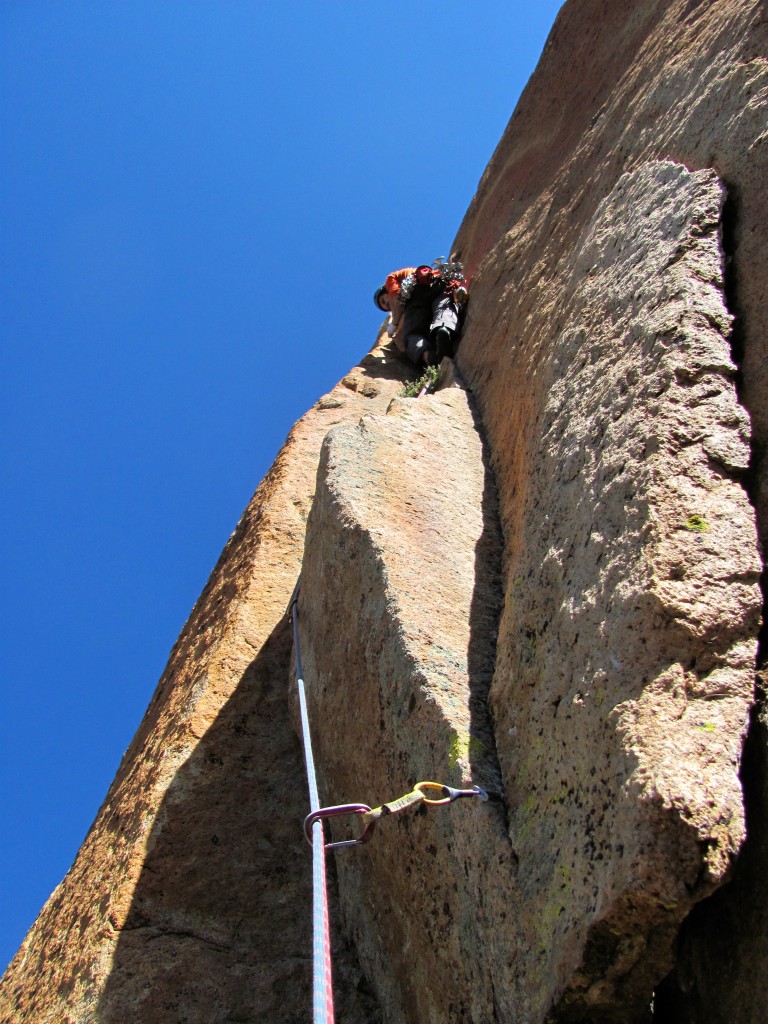 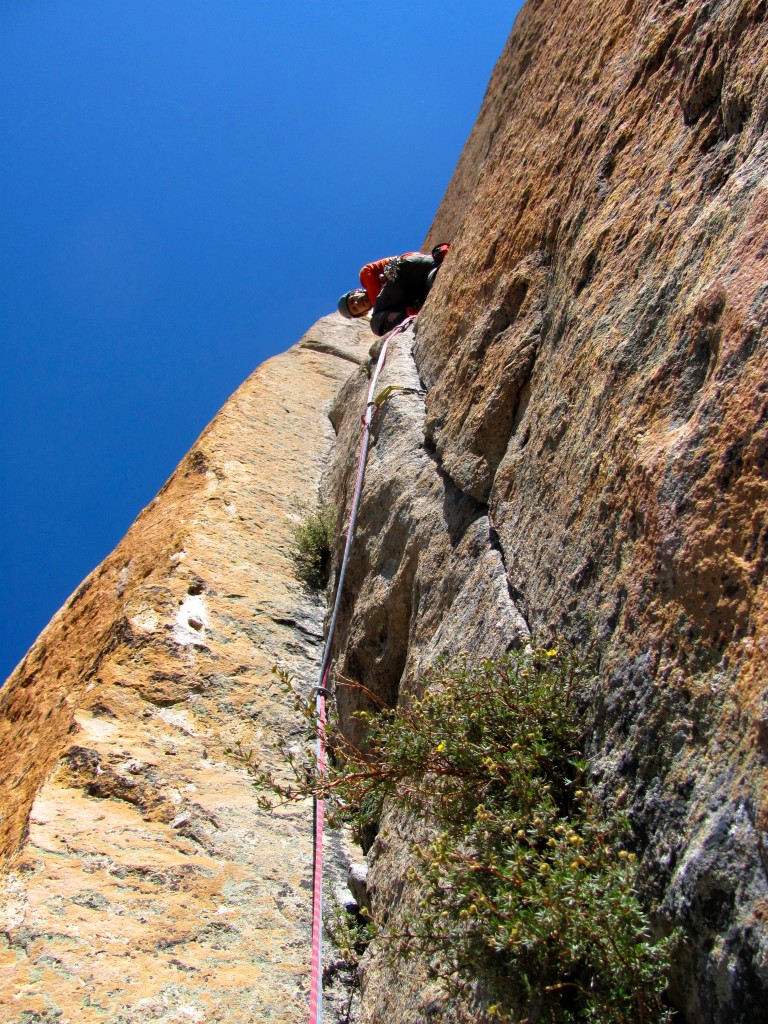 Leading pitch 5 of Beckey Direct. Finger crack to a flake mantle to some dihedral climbing (Sept. 2011). 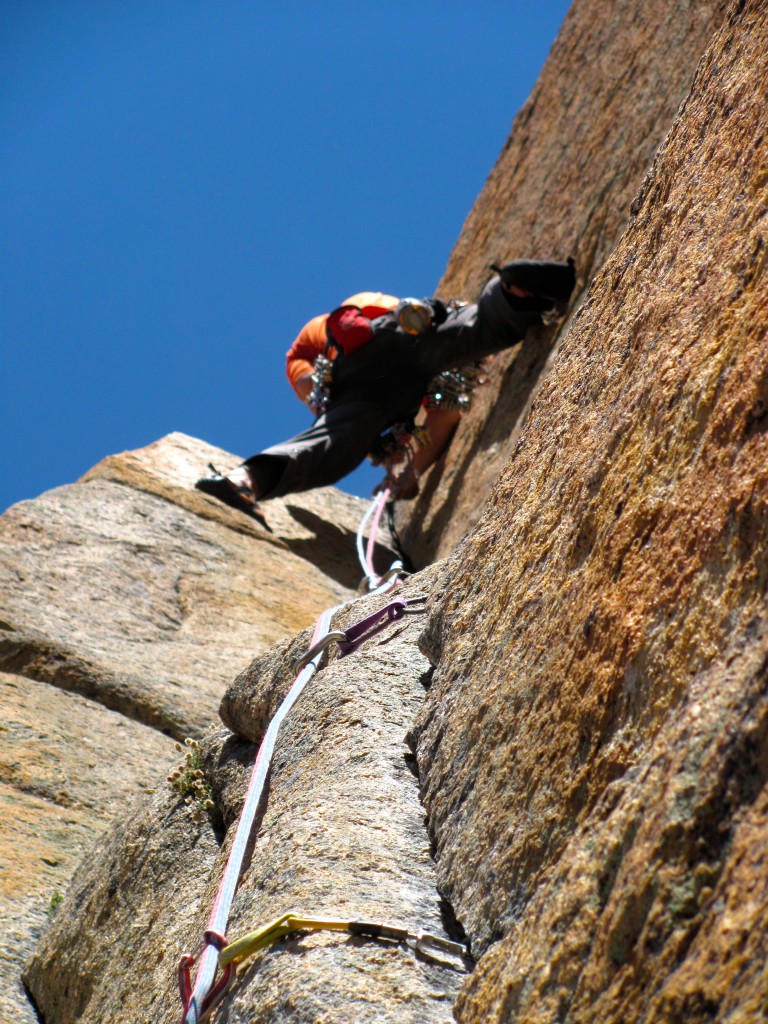 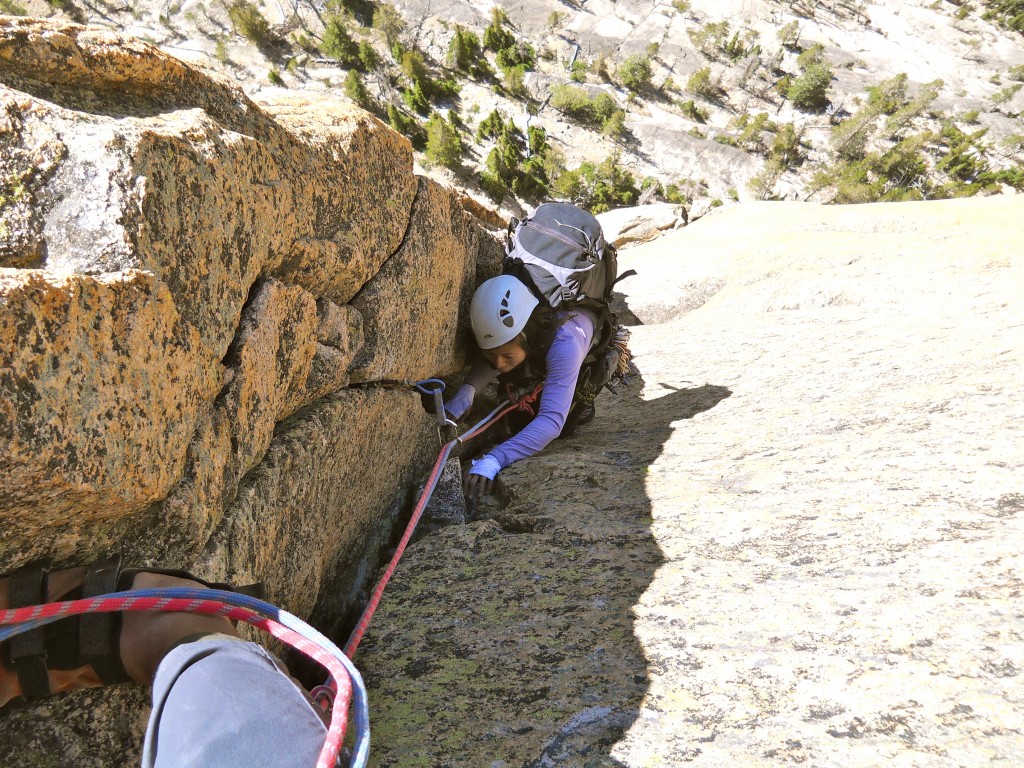 Shirley nearing the top of pitch 5 of Beckey Direct. I think this is the first place you get to see one of Beckey's own (?) buttonhead bolts (Sept. 2011). 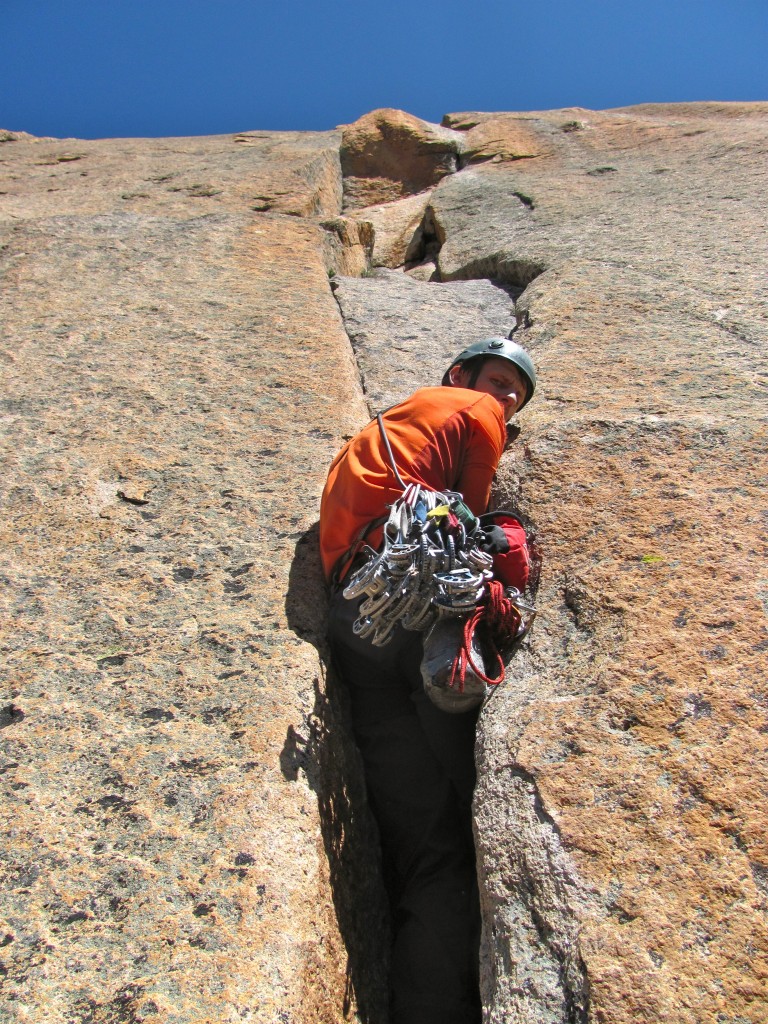 Starting pitch 6 of Beckey Direct - an awkward if short squeeze to the stembox above followed by a roof pull (Sept. 2011). 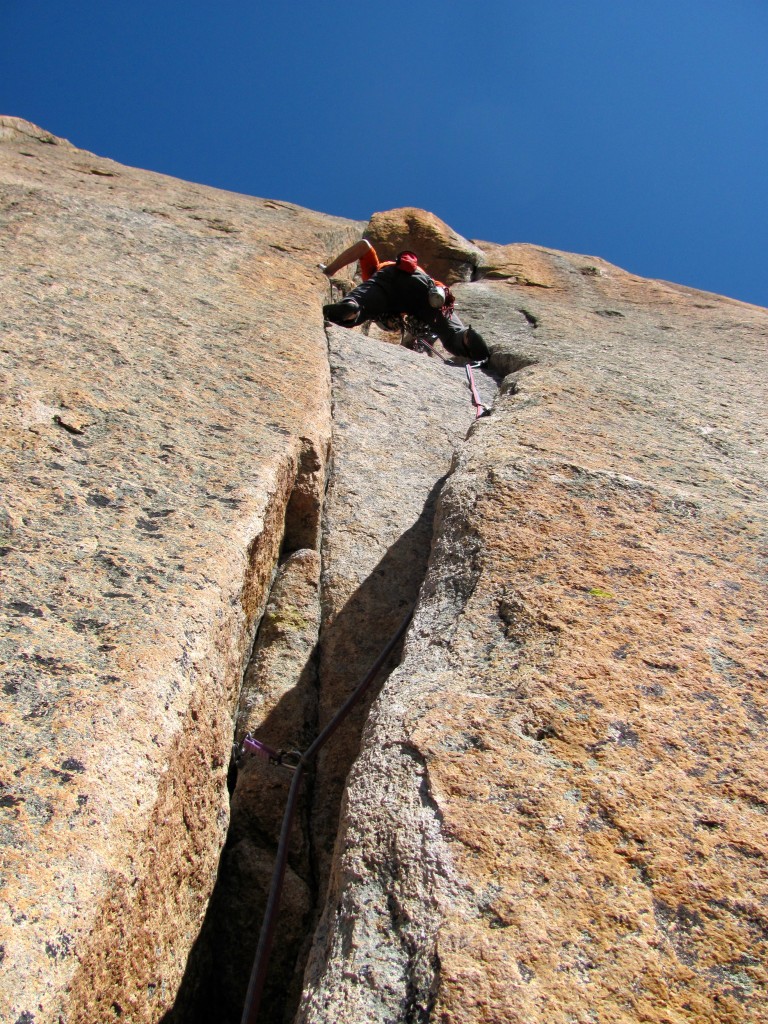 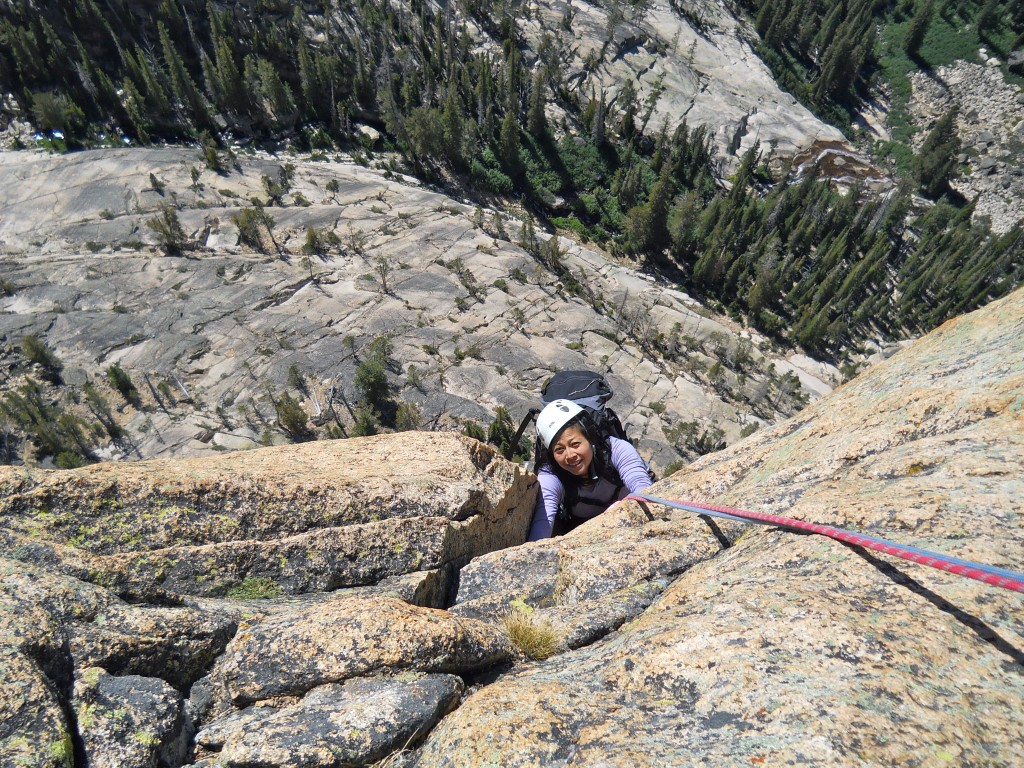 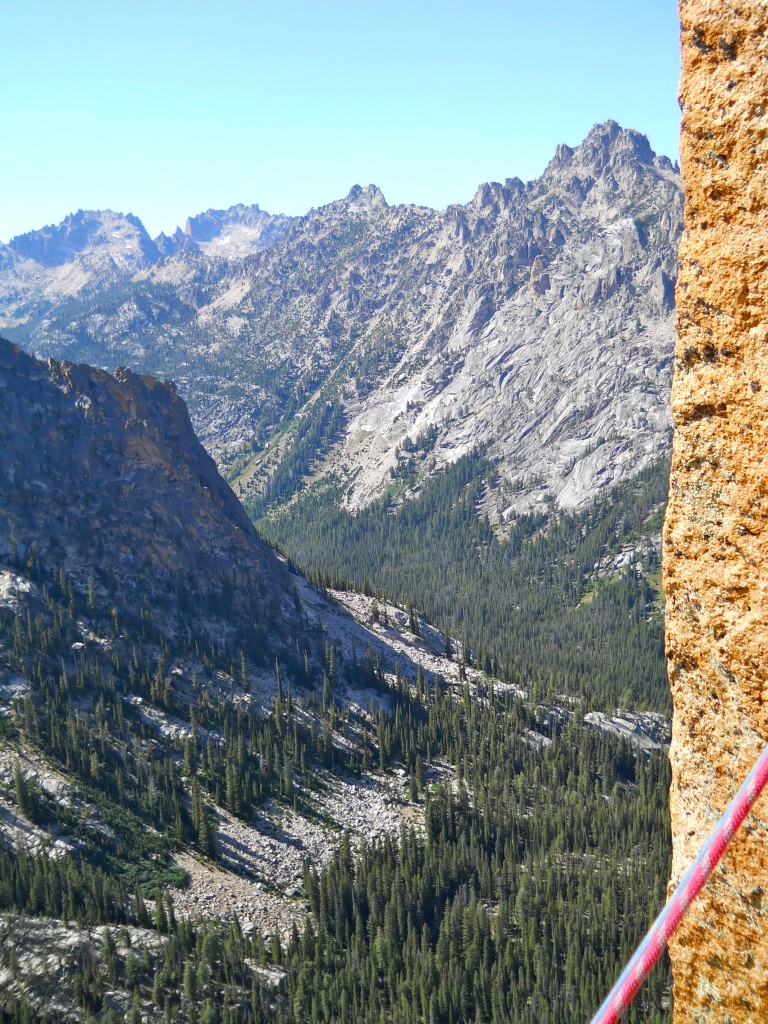 Looking in the direction of Alpine Lakes from the pitch 6 belay on Beckey Direct...lookee at that golden granite (Sept. 2011). 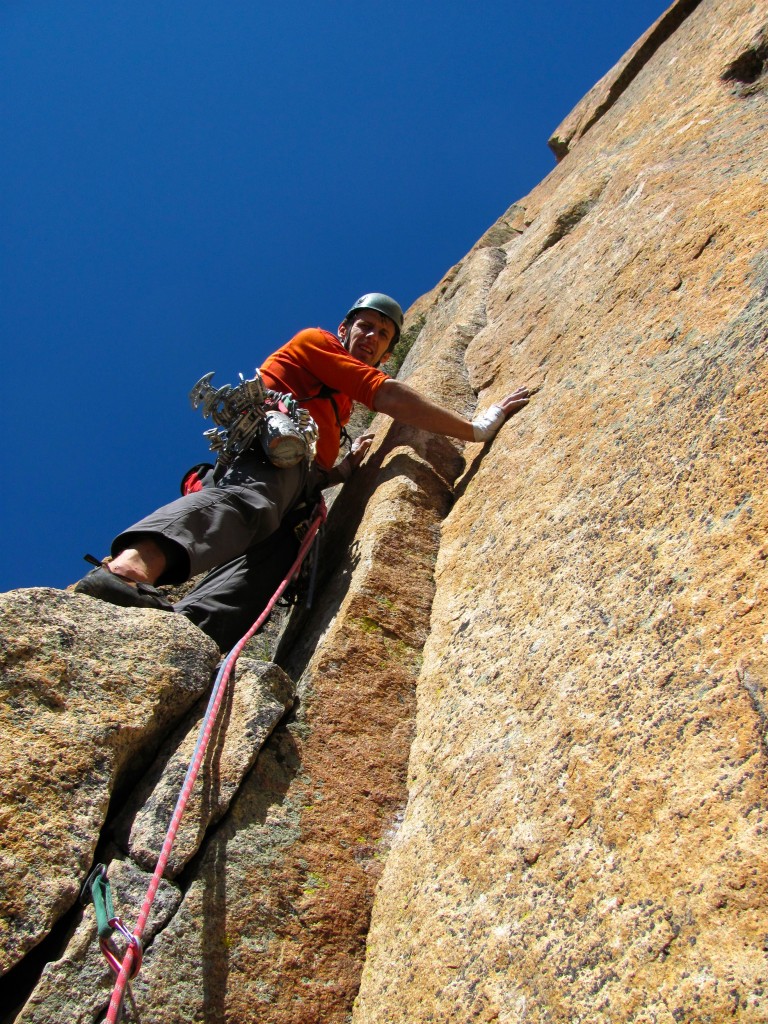 Starting up pitch 7 of Beckey Direct. The good news was that this was the last of the 5.10 pitches; the bad news was that it was another thin tips crack (at least the start; Sept. 2011). 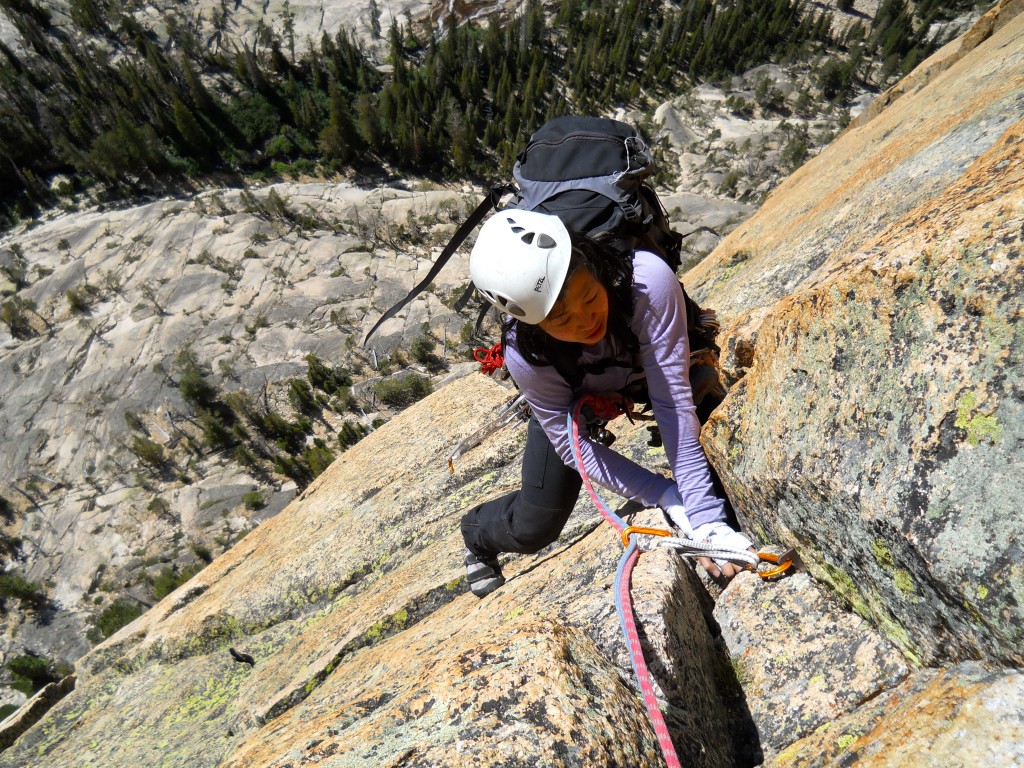 Shirley finishing the last of the hard climbing atop pitch 7 of Beckey Direct (Sept. 2011). 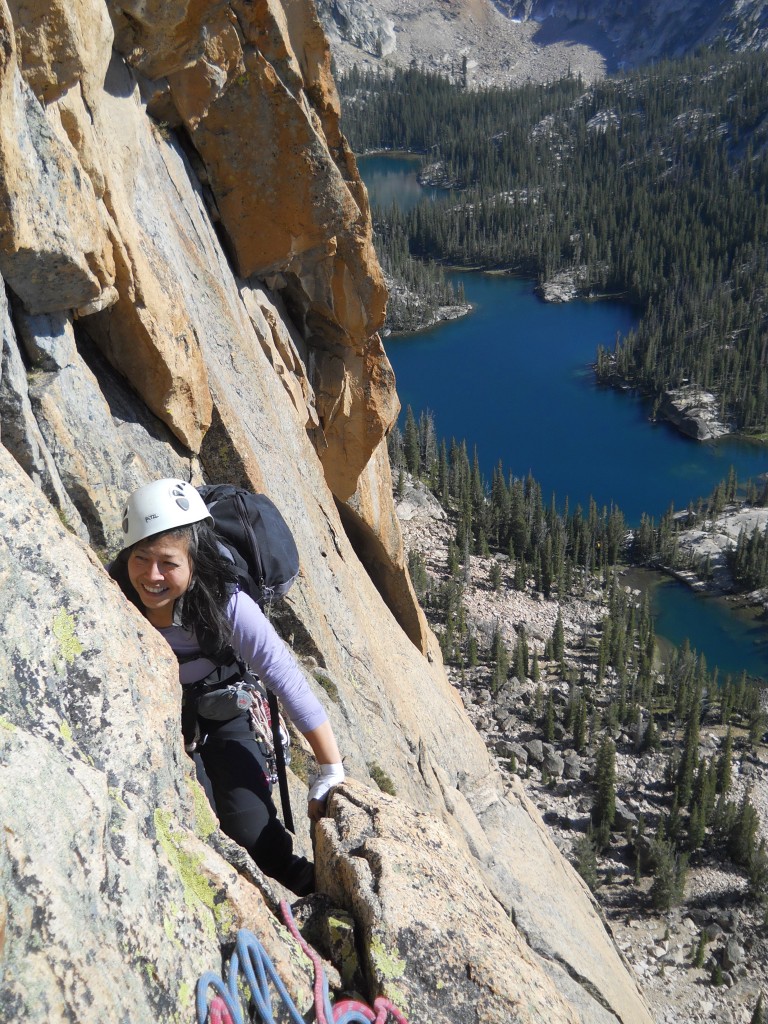 Shirley arriving atop pitch 8 of Beckey Direct. Our camp is down below in the trees near the isthmus separating the two lakes (Sept. 2011). 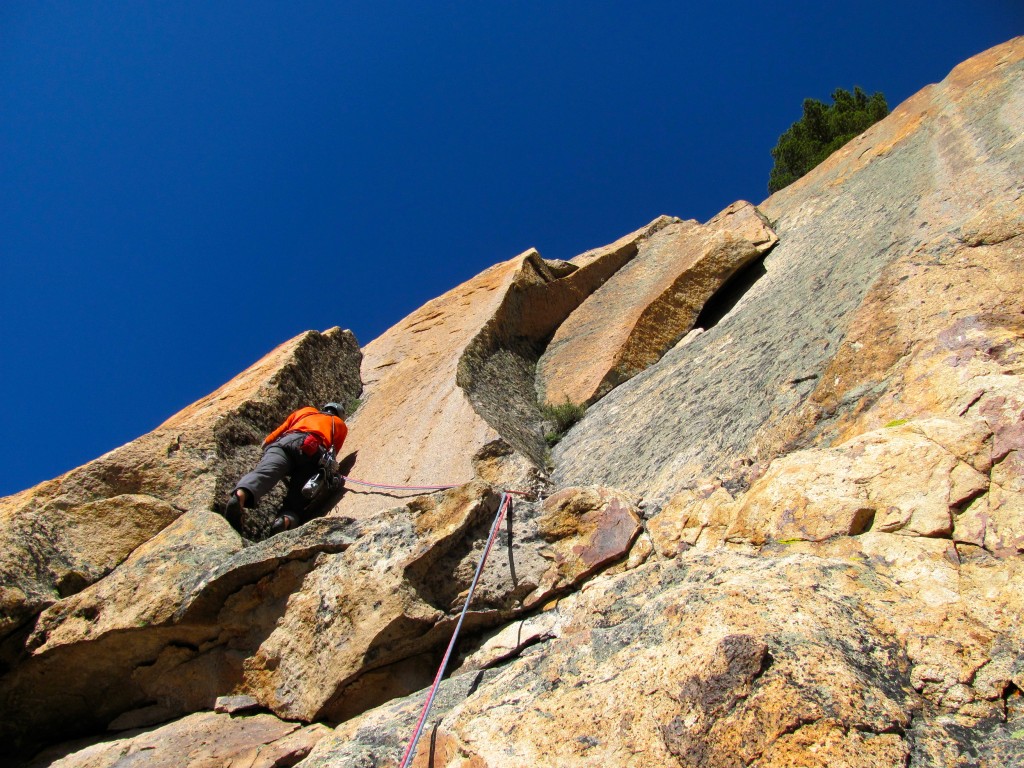 Leading pitch 9 (5.8) of the Beckey Direct route with the Beckey Tree looming above...a little oasis of shade and flat comfort high on the south face of The Perch (Sept. 2011). 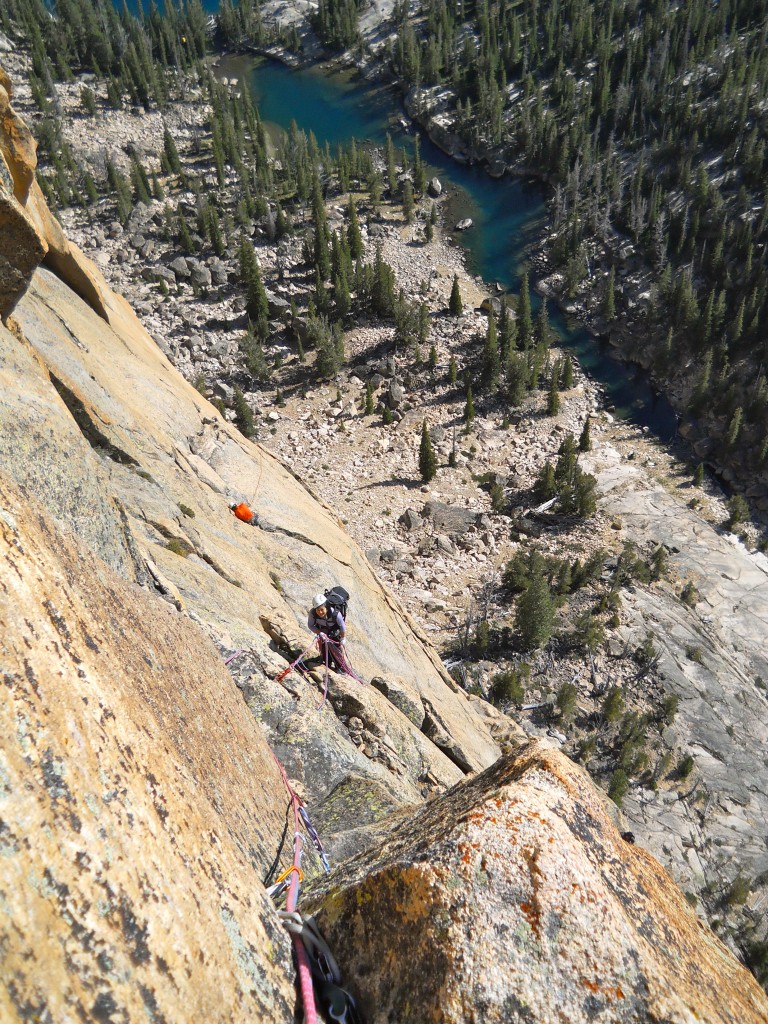 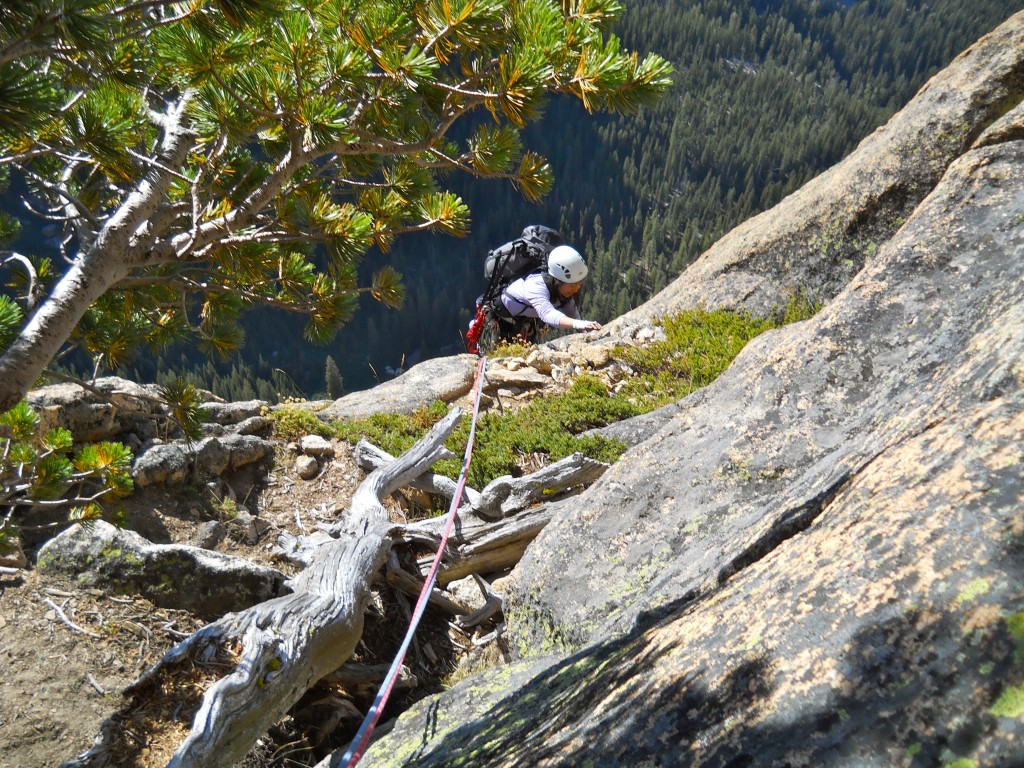 Shirley arriving at the Beckey Tree, top of pitch 9 of Beckey Direct (Sept. 2011). 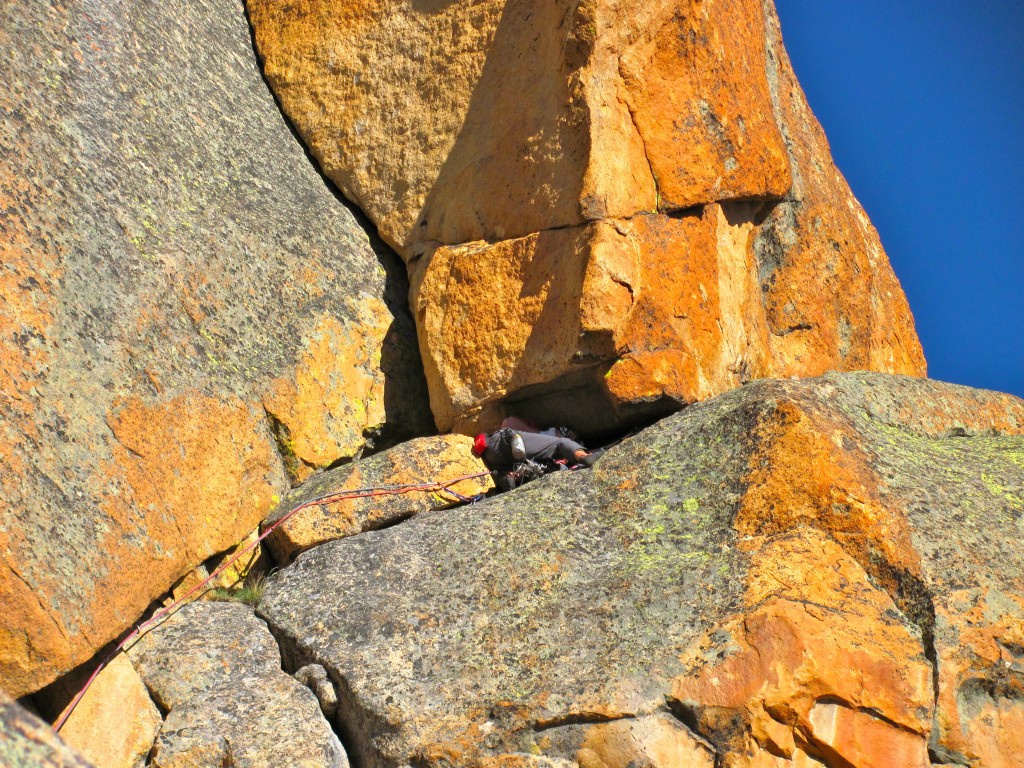 Leading the final pitch of Beckey Direct and very much looking forward to the end of it (Sept. 2011). 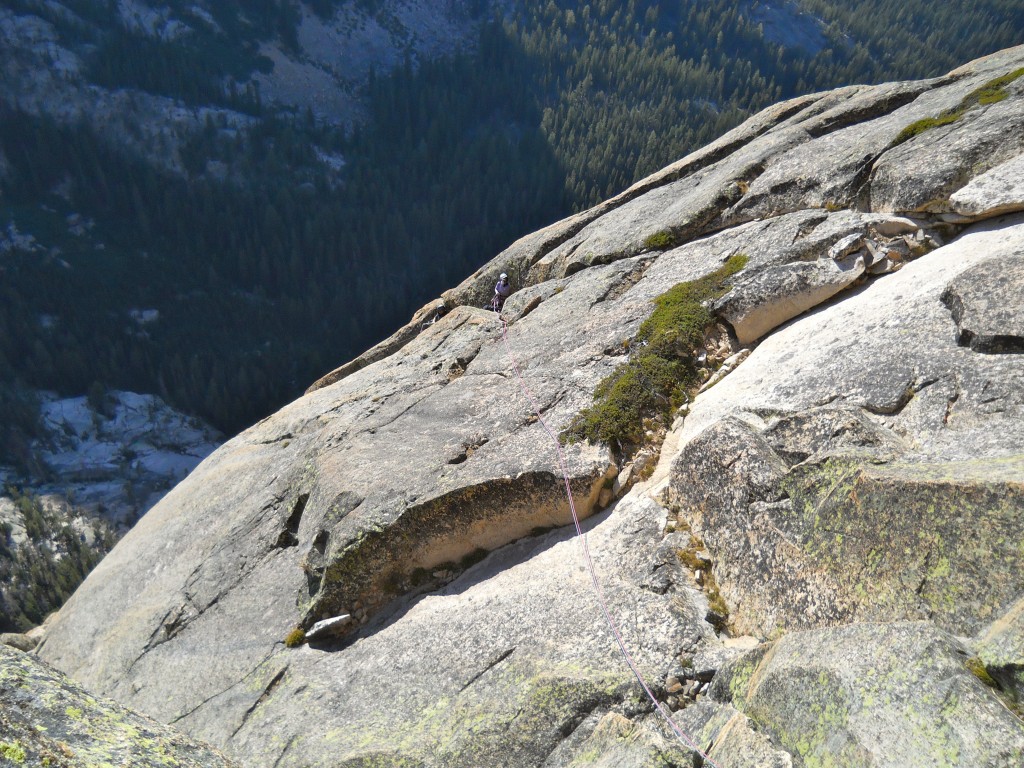 Looking back towards Shirley from somewhere on the final pitch (#12) of Beckey Direct (Sept. 2011). 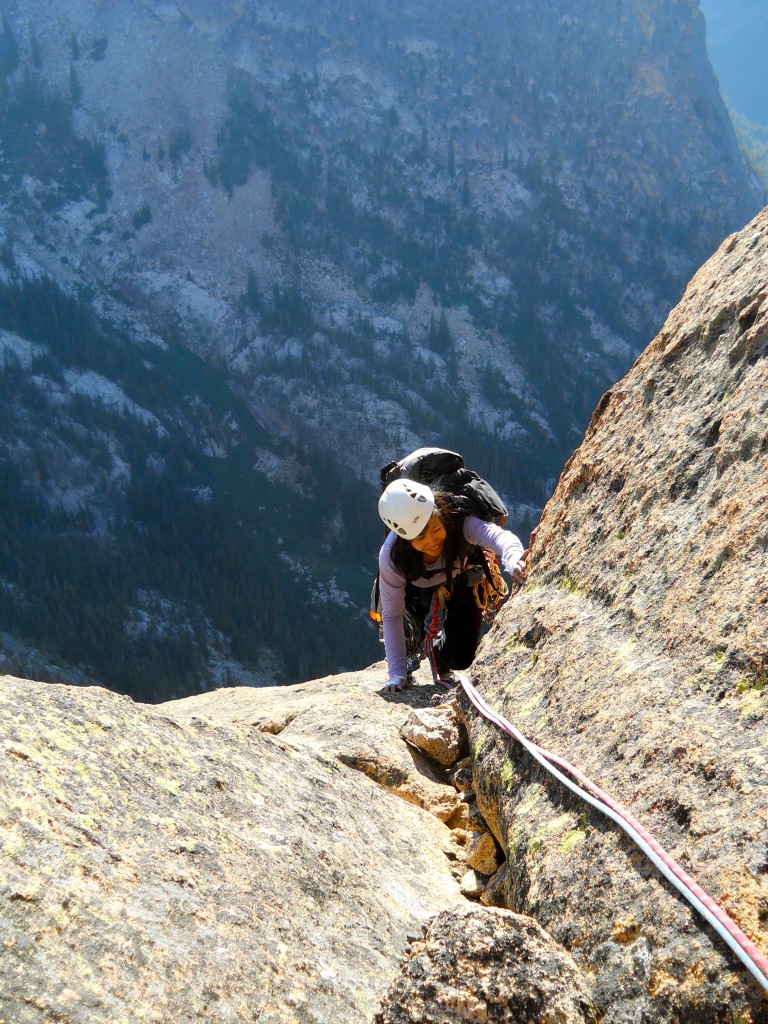 Shirley topping out on Beckey Direct. This is 20 feet from the top of the summit ridge. Thirsty, hot and tired (Sept. 2011). 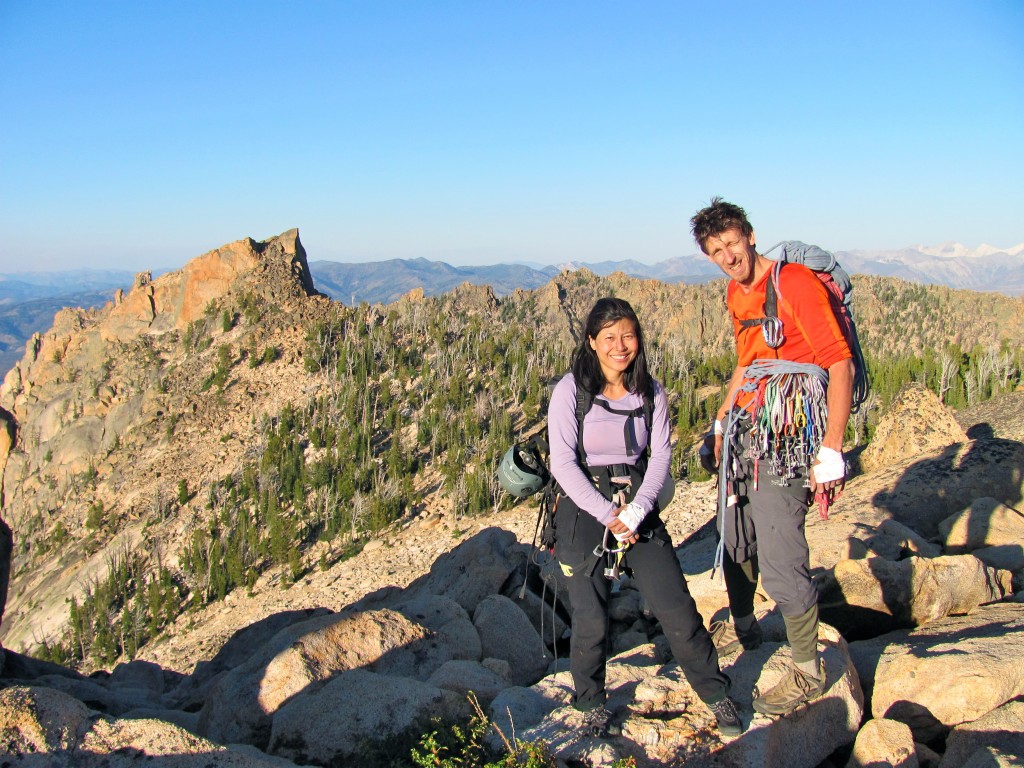 Shirley & I atop Elephants Perch after The Beckey Direct route (Sept. 2011). 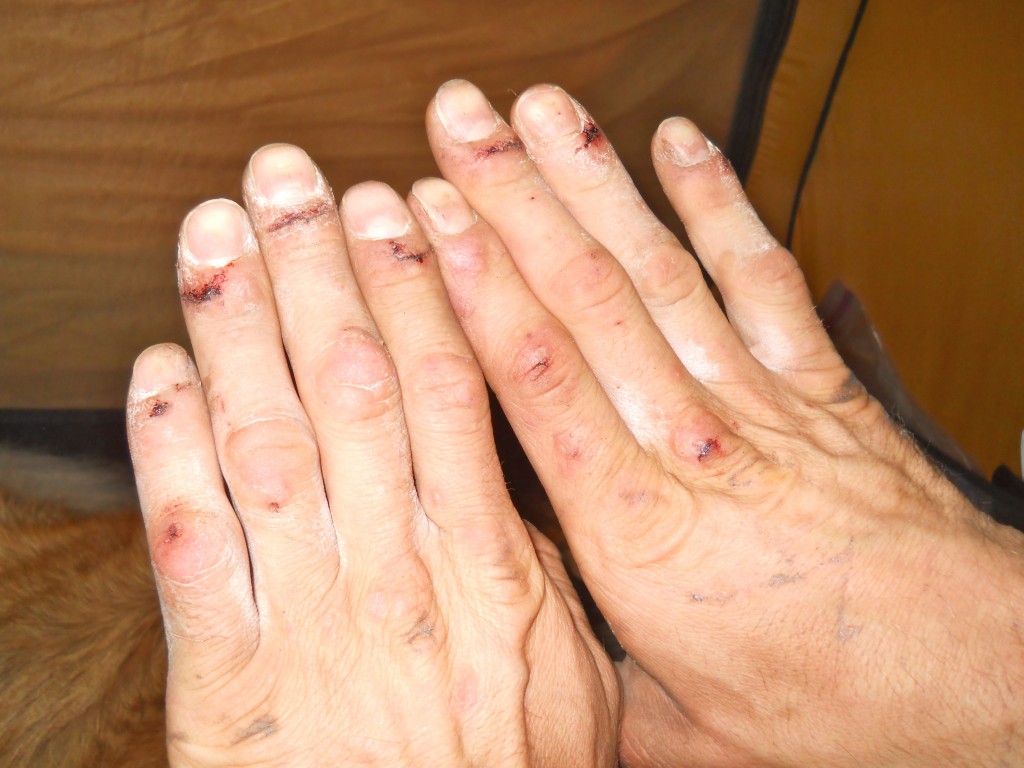