An Attempt On The Finger (One Of Many) 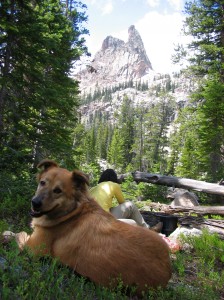 Relaxing in "basecamp" below Finger Of Fate - this is by one of the mid-sized lakes above Hellroaring Lake. Nice camping but plenty of buzzing, biting f...kers when you hit the place at the wrong time of the year (June 25, 2005).

We first scouted the trailhead of the Finger the day after doing Mounties Route on the Perch. Well, we tried to scout it out but kept on bottoming out the rental sedan and finally gave up (which itself required some major work to get the car out…) Some years later, we saw a minivan parked at the trailhead which to this day (6 or 7 years later) I still think about with admiration.

The second time around, we hiked in after driving from Portland Friday after work only to see two old dudes racking up, taping up and doing all sorts of shit at the base. After a quick hour of preparation one got started and was still working the bulge 30 feet up pitch 1 a brief hour later. I suspect malice vs. incompetence…i.e. “locals” showing us out of towners that it’s their Finger. Whatever.

Third time around (most of the photos below, from June of 2005), we camped at the upper lakes on Saturday night and started up the route (The Book III 5.8) on Sunday morning only to have a thunderstorm chase us off from pitch 2. We bailed. The skies cleared…fortunately it was only momentary before a downpour began as we hiked out.

Then there were more failures. “Let’s go do The Finger” has become synonymous with let’s go do a long drive, followed by a nice casual family backpacking trip :). Perhaps one day… 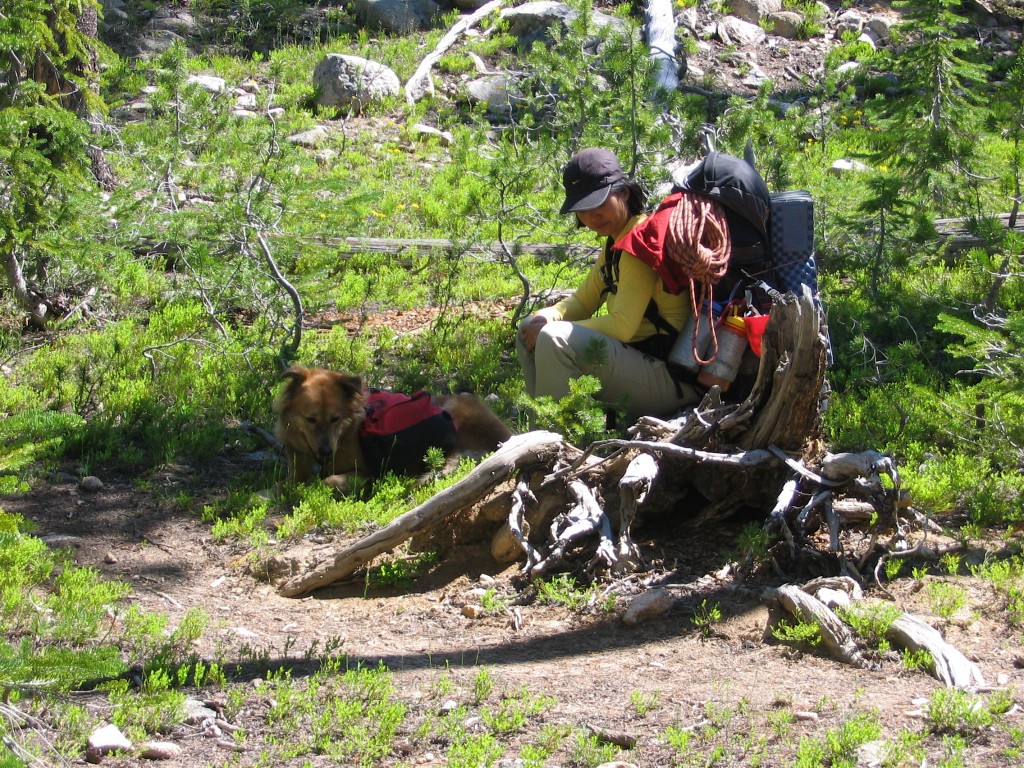 Shirley & Blondie resting during the approach hike to the Finger Of Fate (June 2005). 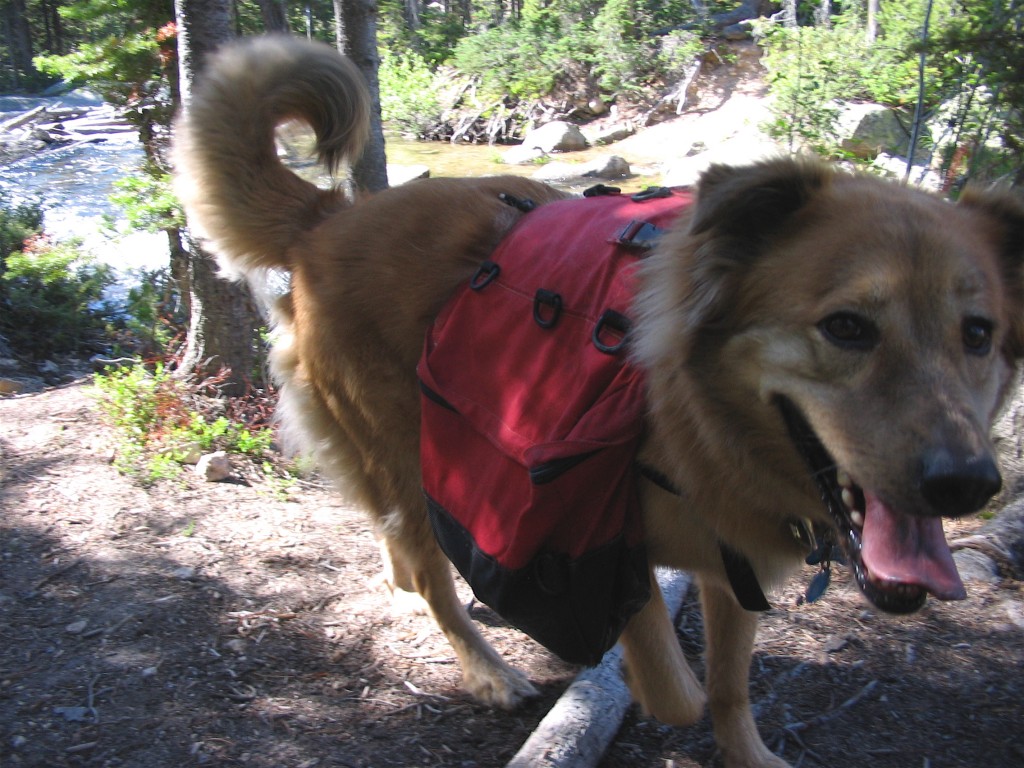 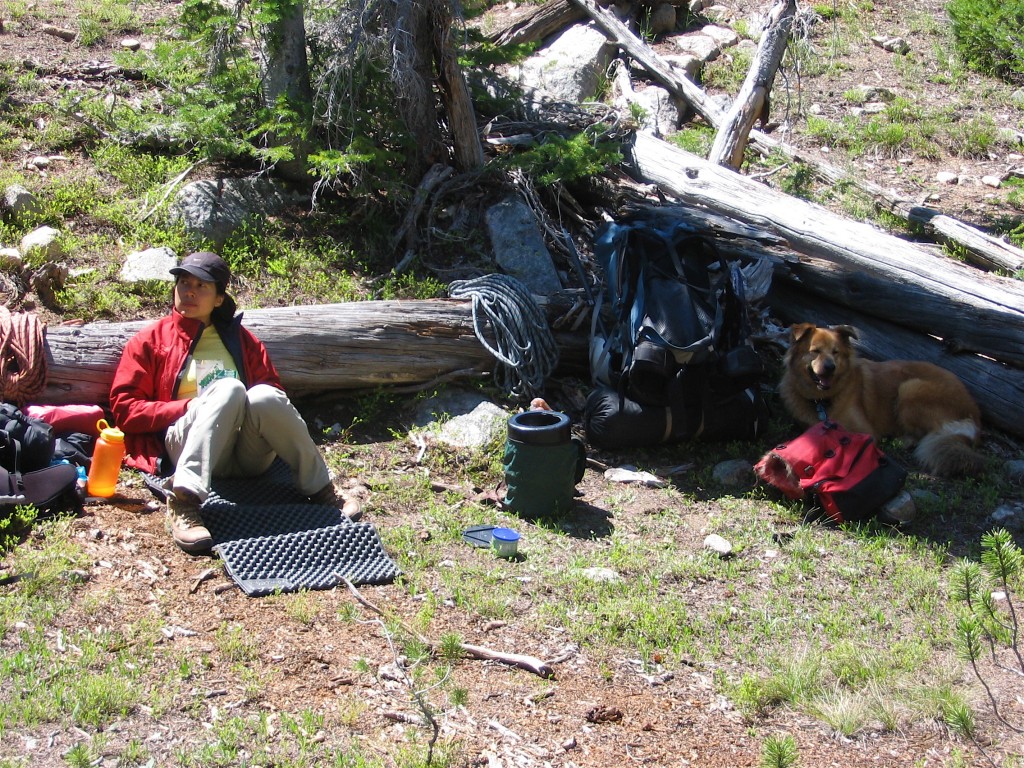 Shirley & Blondie resting in camp after the hike in (June 2005). 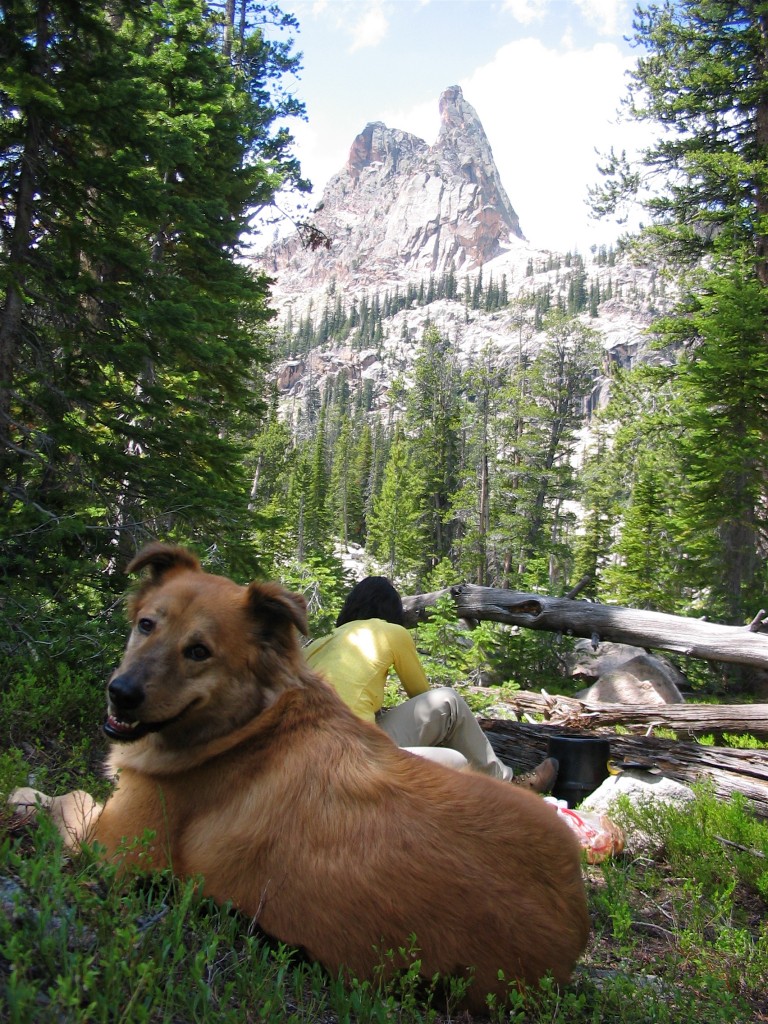 Relaxing in "basecamp" below Finger Of Fate - this is by one of the mid-sized lakes above Hellroaring Lake. Nice camping but plenty of buzzing, biting f...kers when you hit the place at the wrong time of the year (June 25, 2005). 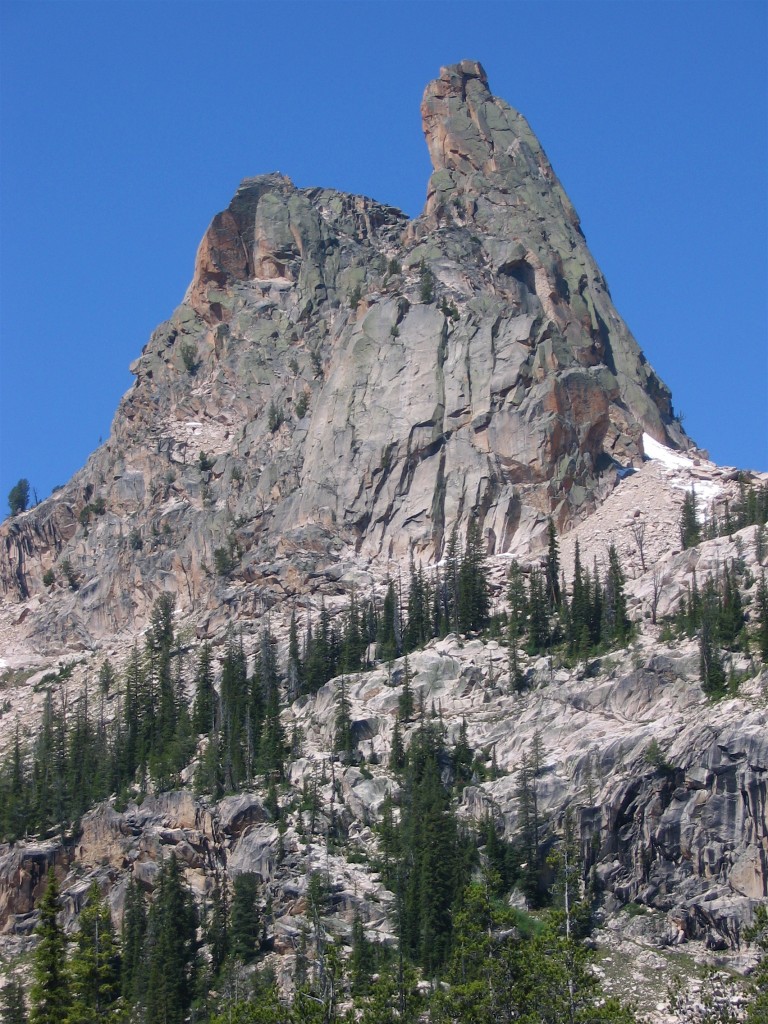 The Finger Of Fate as seen from the approach (June 2005). 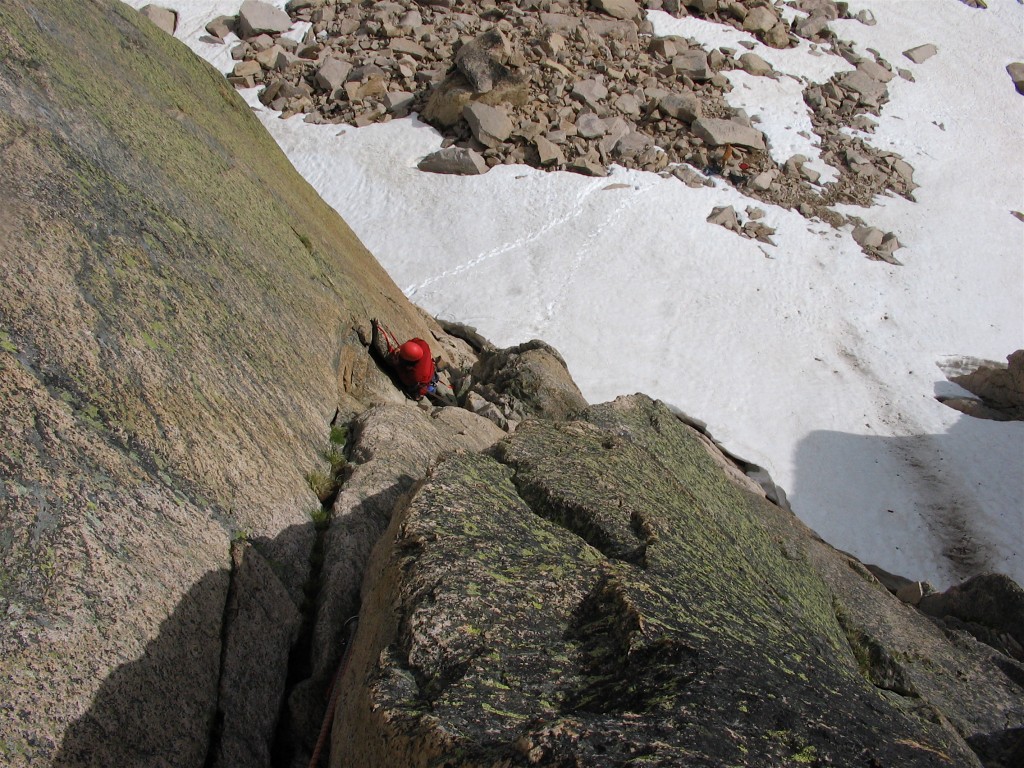 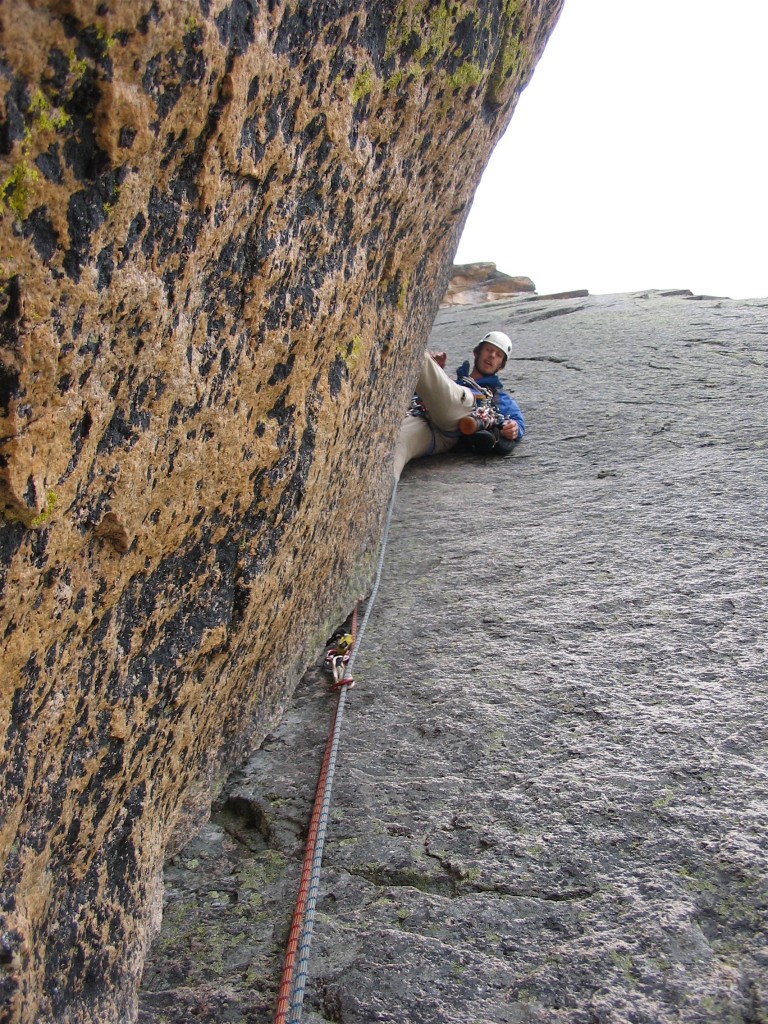 Leading P2 of The Open Book. Incredibly fun crack in dihedral and some of the best granite I've seen (June 2005). 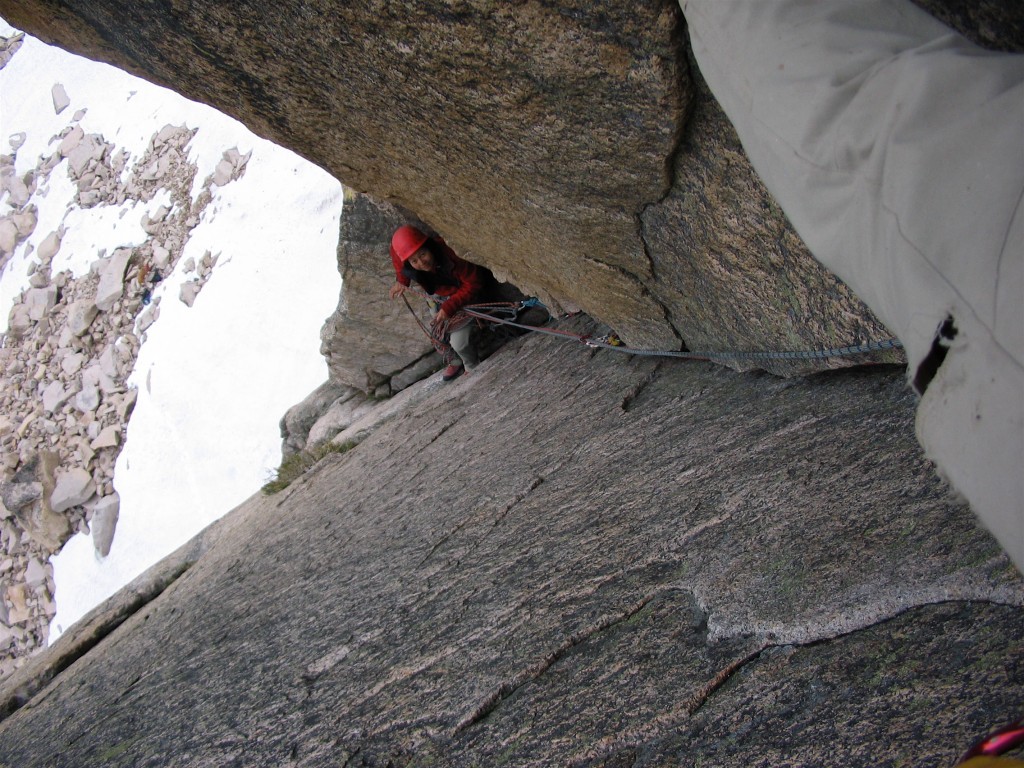 Looking back at Shirley from the lead of the stellar pitch 2 of The Book route (June 2005). 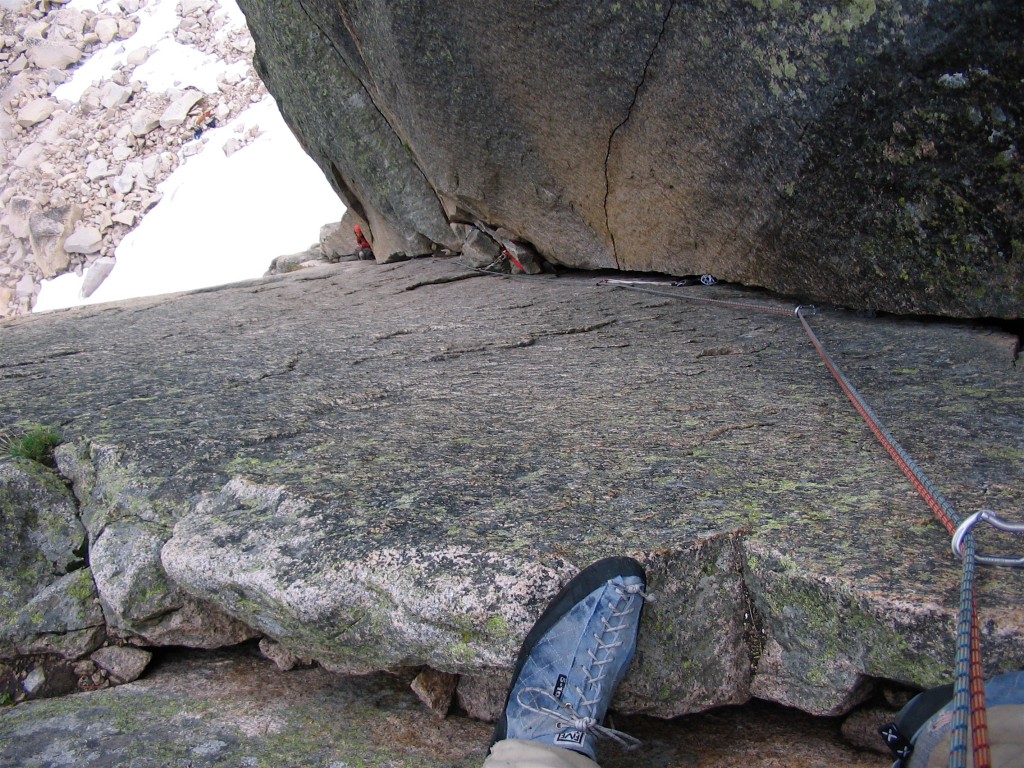 Looking down lower half of P2 of The Open Book. Stellar climbing! The handcrack is incredibly fun (June 26, 2005). 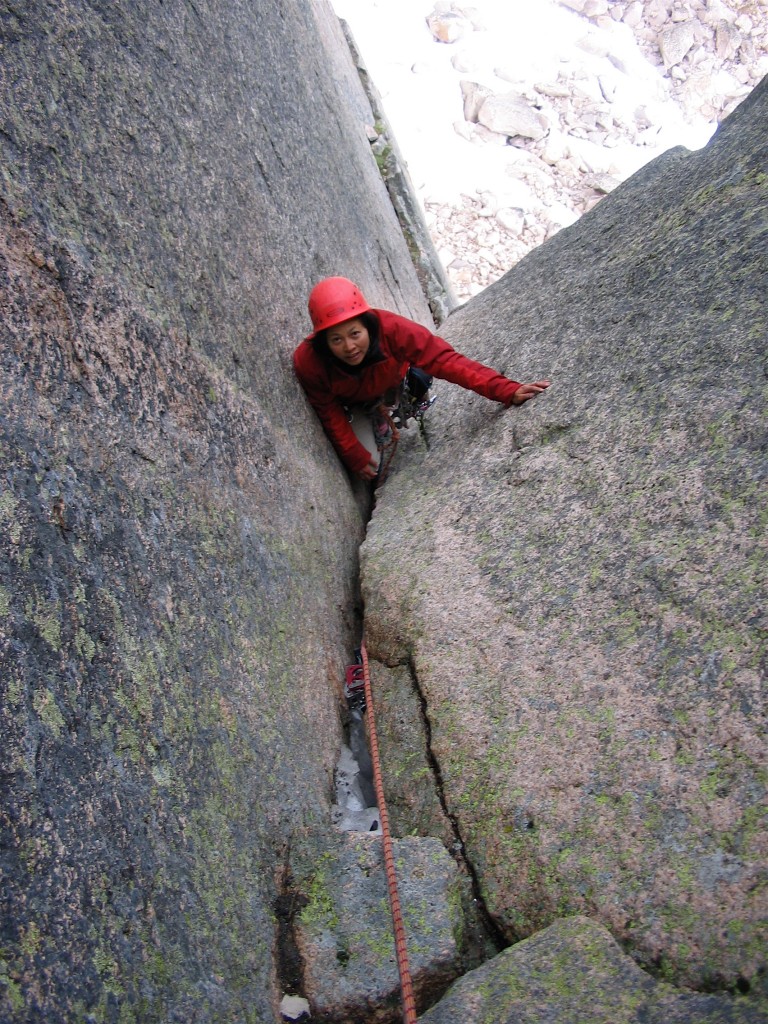 Shirley on the upper half of pitch 2 of The Open Book route. This is right before we bailed in a rain. Second failed attempt on the route (June 26, 2005). 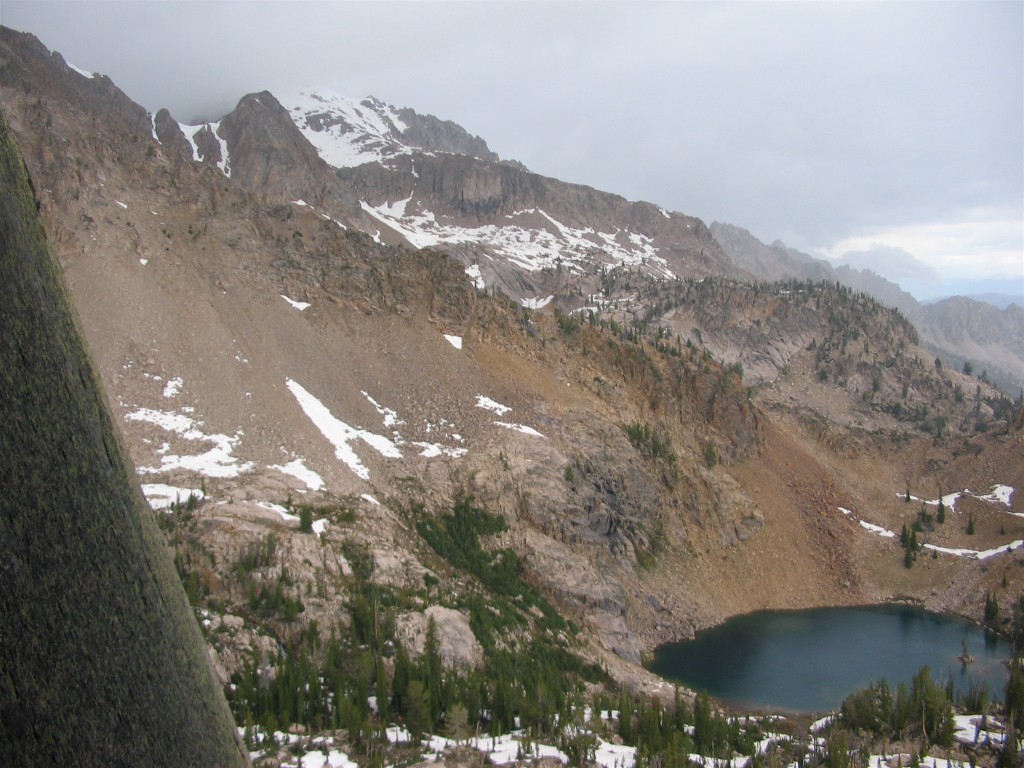 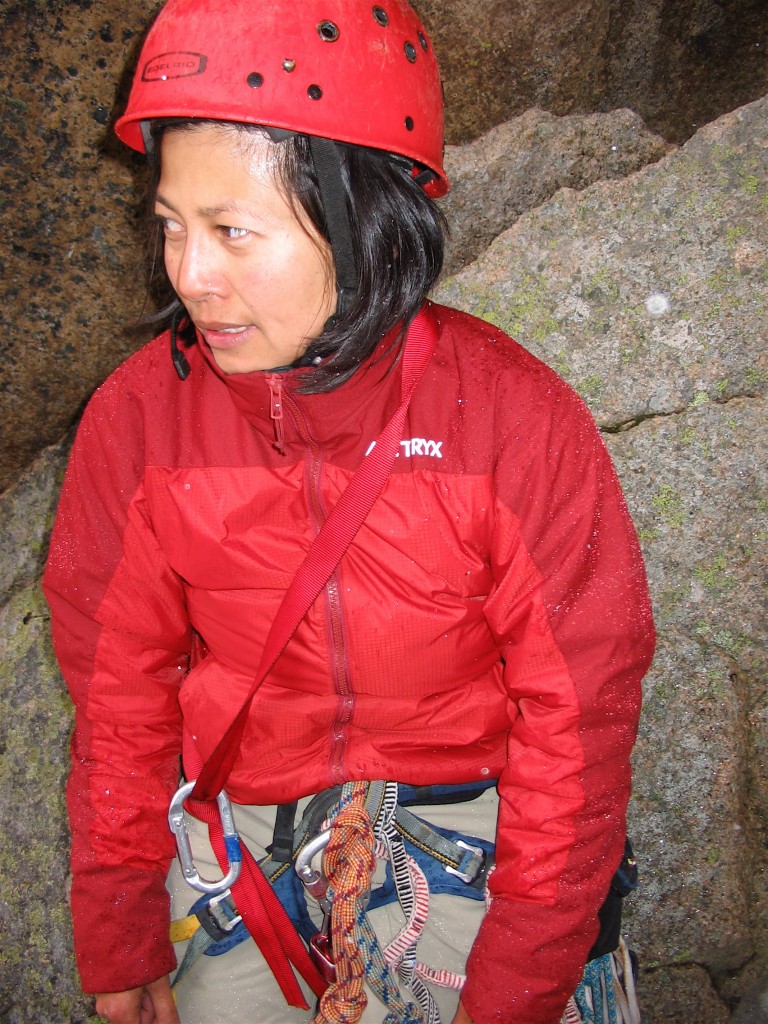 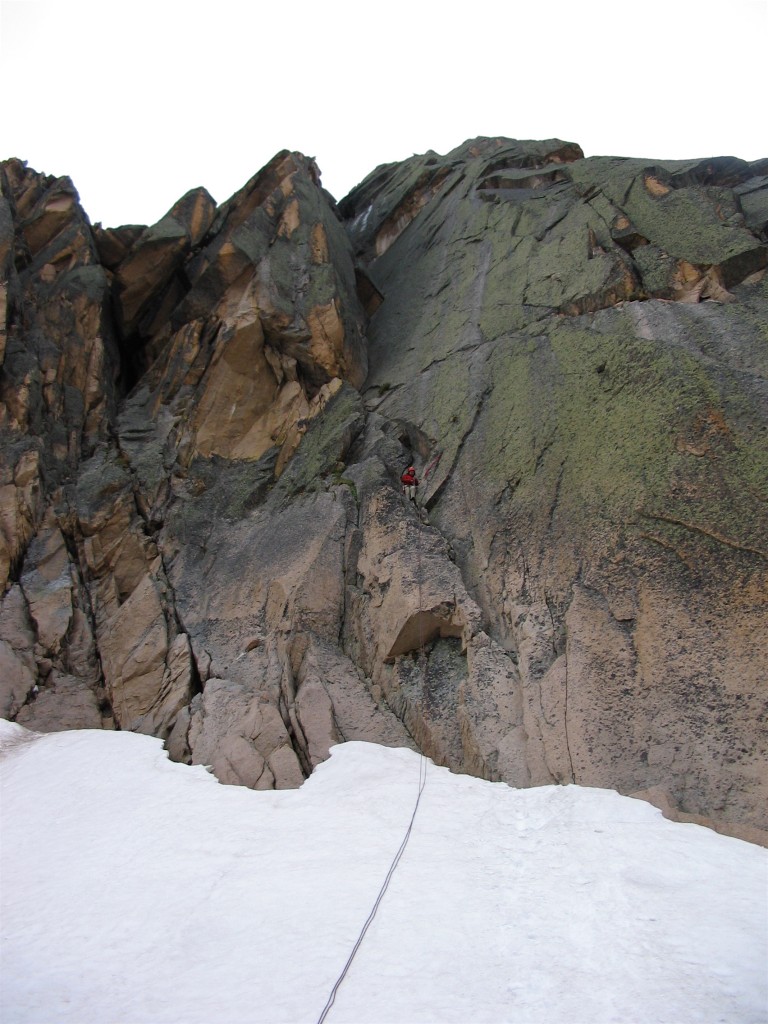 Shirley rapping off The Book route on the Finger Of Fate (June 2005). 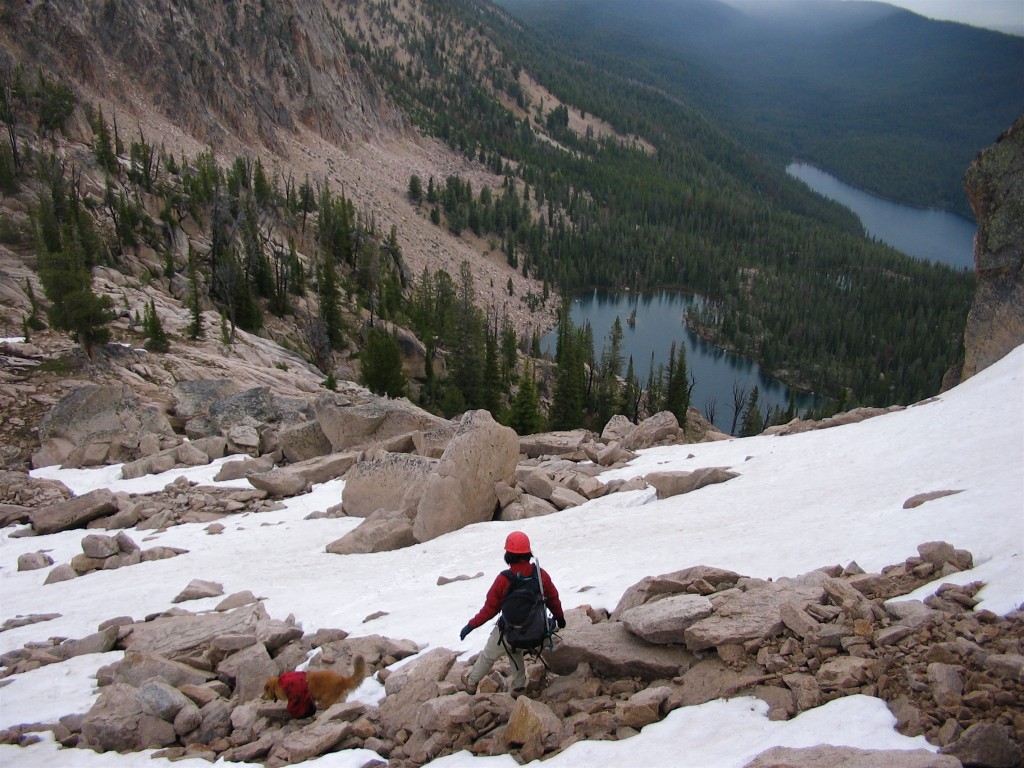 Shirley & Blondie hiking down after our bailing...a short break in the leading storm front followed by a steady downpour for the hike out. 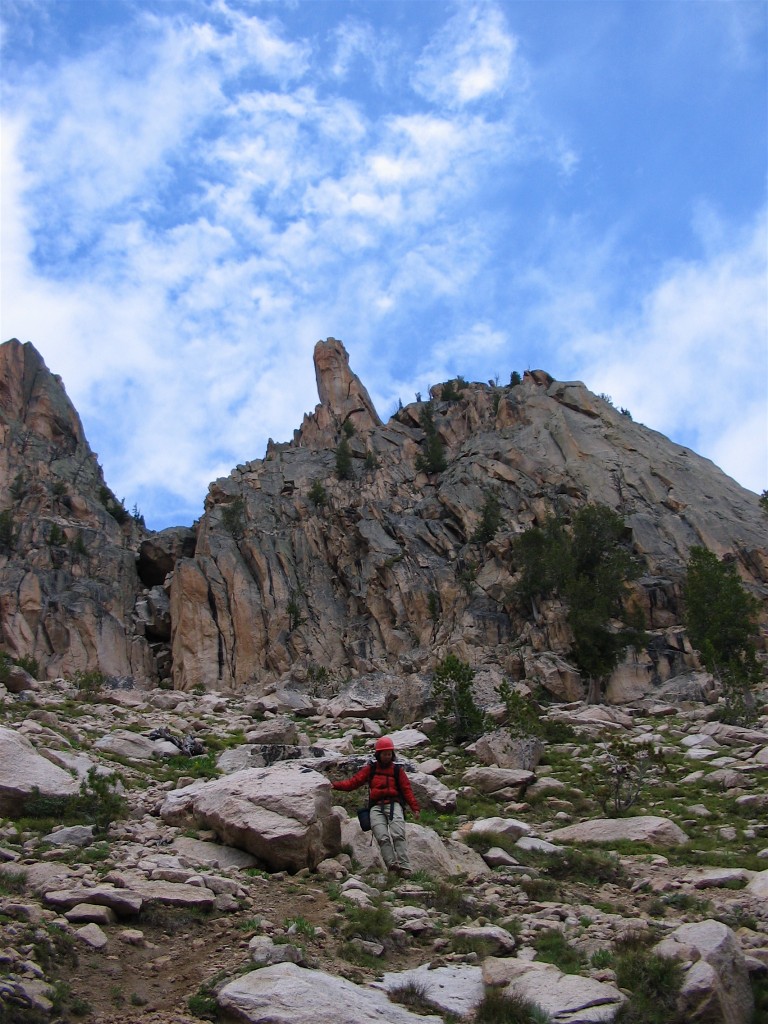 "Standard" approach to Finger of Fate. The Open Book route is accessed by hiking (more or less) straight up to the base in the photo and then traversing right around the corner (our second failed attempt on June 26, 2005) 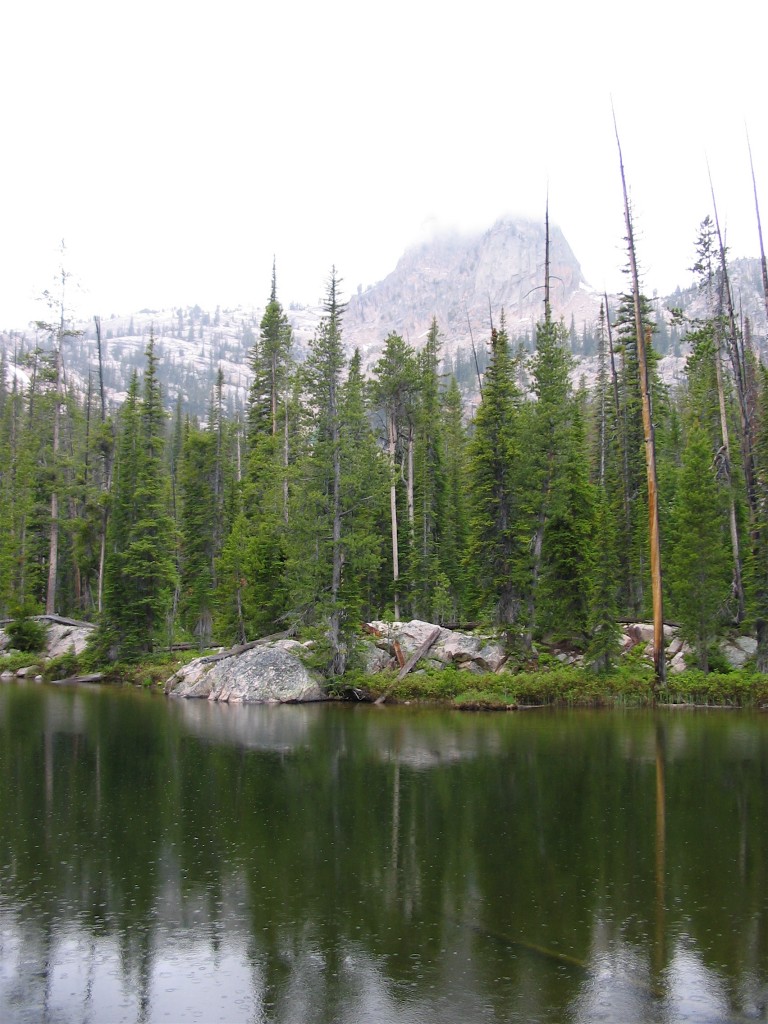 By the time we got down to our camp, The Finger was mostly socked in and it was pouring (June 2005).