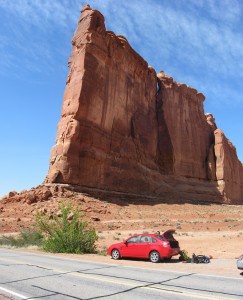 Shirley packing up the junk at the car with Tower Of Babel in the background. Zenyatta-Entrada climbs the sunny prow of the formation (~600 feet). The arduous approach to the base can also be seen (Apr. 2008).

We’ve been wanting to climb Zenyatta Entrada (IV 5.4 C3) for a few years but nerves, weather, opportunity never came together at the right instant of time and space until last weekend. Taking advantage of Southwest’s airfare slashes (a poor aircraft inspection record becoming public might have induced this – I dunno?), we flew down to Salt Lake last Friday night. Due to late arrival in town and our laziness, we got to the base of the line after 10am following the arduous 90 second approach. The weather was sunny but there were strong gusts of wind. At this point we were pretty sure we’d be fixing the first couple pitches and returning for more on Sunday.

The first two pitches offer lower angle climbing and positive nutting and so they went relatively quickly (mostly C1 I’d guess). Third pitch is where things got steeper, thinner and less positive (small nuts, largish RP’s mostly). The going was fairly secure until I came to within 10 feet of the intermediate belay anchor. Well in sight of the bolts and chains, I would spend the next hour trying to put together a house of cards to get my fat ass up this final short stretch. With a long string of questionable gear below me, I did a fare share of praying as my attempts at hooking the section resulted in small flakes blowing off. Similar results were obtained when trying to nut a sandy looking groove which would be nearly out of reach had I not been able to string three nuts together to extend my range. All for nothing. A half engaged #2 Camalot in a blown out pin nest combined with some well-timed updraft (you know, levitation…) and I finally clipped the anchor. Thoughts of finishing up to top of P3 proper were nixed and so we fixed the ropes and came down trying to secure the lines from abrasion the best we could. Did I mention the windy conditions?

As it was early afternoon, Shirley & I went into Moab and did the tourist thing: first we had a couple beers at McStiff’s and then a couple margaritas at the Mexican joint, followed by more margaritas with dinner in the evening. We carb-loaded in anticipation of having to do the arduous approach again. At this point the thoughts of wind + Entrada abrading the shit out of our ropes were almost out of my mind. We headed back to our discount motel in Green River where the sounds of a trucker next door doing his share to support the rest stop economy lulled us to sleep. 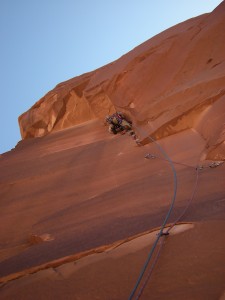 Leading the reported C3 crux pitch of Zenyatta-Entrada - a tiered roof/dihedral system above some ledges. This is a great position with the entire route below your feet once you turn the roof. Long range shot of the roof from below is here (Apr. 2008).

Expecting a fuller day 2, we got to the base of ZE after 8am once again following the arduous approach. The wind was trying to outdo its performance from Saturday with more sustained blowing and bigger gusts. We jugged the lines which pleasantly enough held. For breakfast, I ordered 15 feet of C2-ish blown out scars to a bolt, to a penji, to an easy crack. And then we were looking up at what reports call the “C3 roof”. We were trying to find a stance for Shirley that would allow her to avoid the human meat rocket (that’s me!! That’s me!!) should I fuck up at the crux thinness. The going was thin and funky but I was still only within a bone-breaking distance of the belay ledge (not a “lights out” kind of a fall) when I got some small but positive RP’s and small nuts. Like a typical gumby, I supplemented lack of skill and nerve with excess of purchasable technology in the form of countless aid screamers. An interesting hybrid placement under a mini-roof, then a few more thin RP’s (…technically mid-sized RP’s as they go from #1 to #6, but “thin” gives more drama) and I was singing “Hallelujah” at the bolts under the big roof. Quick traverse on drilled angles and soon I was watching Shirley swinging out from under the roof as she cleaned the pitch. It should be noted that this route is a real draw for crowds down below: some choose to drive by and yell while hanging out the window while others stop and take photos. [And once in a blue moon, a kind sould will send you some of those GREAT shots from below – thank you Adam!!] I was waiting to get a drive-by flash next. Did not happen. The last pitch went quickly and smoothly as it has been restored to its FA condition in interest of preserving the stone (a great effort by some very dedicated and hard working people – see below): a touch of C2 followed by a reachy bolt ladder. It’s not supposed to be a bolt ladder but with my 6’7” height and top stepping I did not have to do any hooking or other funkiness. Sitting on the formation’s sloping shoulder just below the summit I was being sandblasted by relentless wind that kept coiled rope nearly horizontal. Shirley arrived and we hiked over to the back of the summit “bulb” and did a quick pitch to the top (A0). Unlike Saturday, the horizon was cloudy and LaSals were nearly invisible. We first thought that a rainstorm was about to roll over us but then realized it’s only a dust storm. We did not linger as we were expecting an epic rappel. Did I mention it was windy? With care and diligence we avoided any rope snags and reached the ground smoothly however.

Quick drive to town and soon we were putting away all-you-can pizza at the what-chummacall-it place on the main drag along with bad-but-cold-so-who-gives-a-shit beer. Salt Lake City again and back to work Monday morning. I have to say that ZE was the best aid route thus far for me but I always say profound things like this on a Monday morning after… 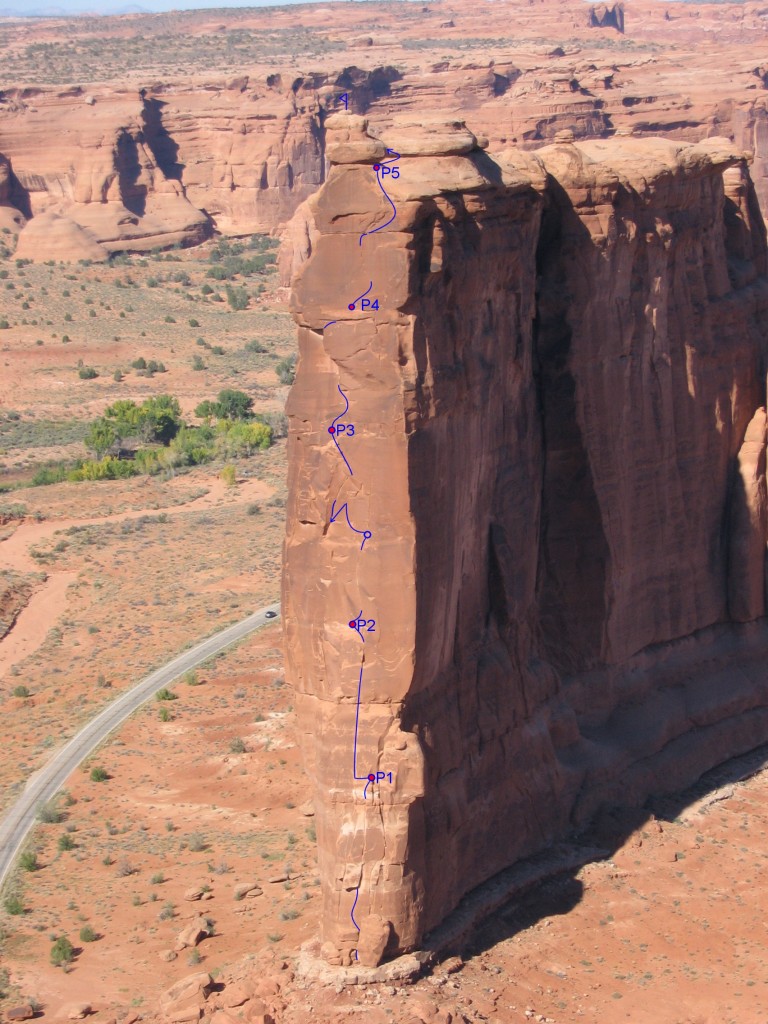 Zenyatta-Entrada (IV 5.4 C3) on The Tower Of Babel as seen from summit of Three Gossips (North Tower). Belays indicated and route highlighted only where it's not clear where the crack is in photo.

Starting up the first pitch of Zenyatta-Entrada on the Tower Of Babel (C1; Apr. 2008). 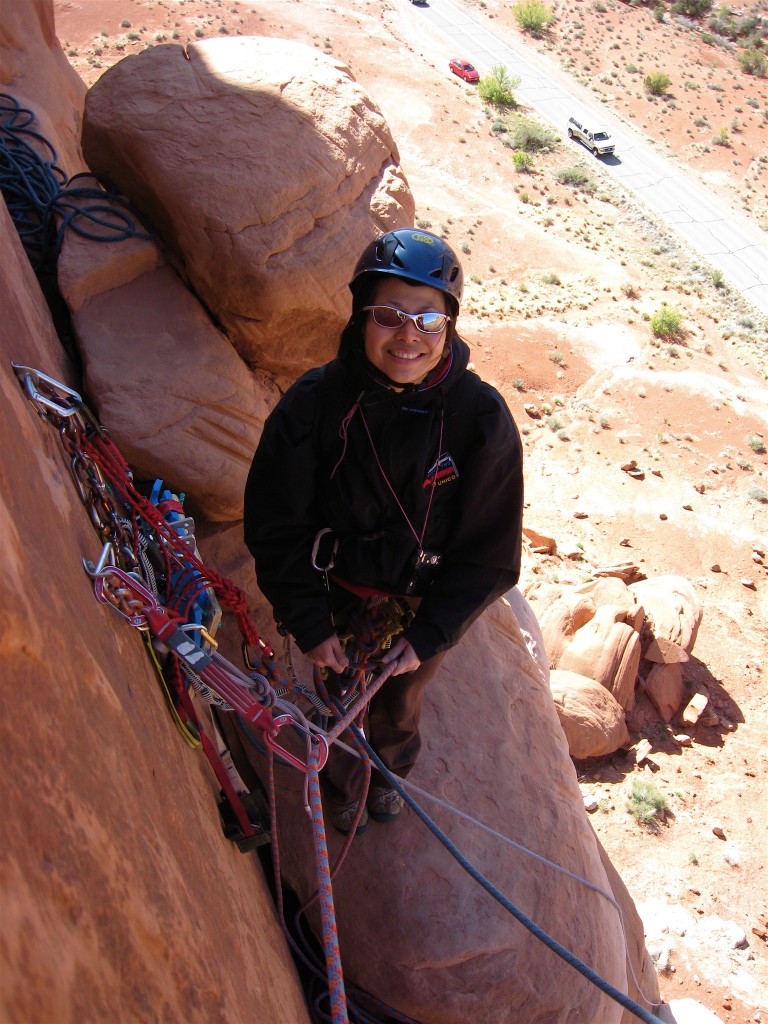 Shirley belaying from a comfy ledge atop P1 of Zenyatta-Entrada (Apr. 2008). 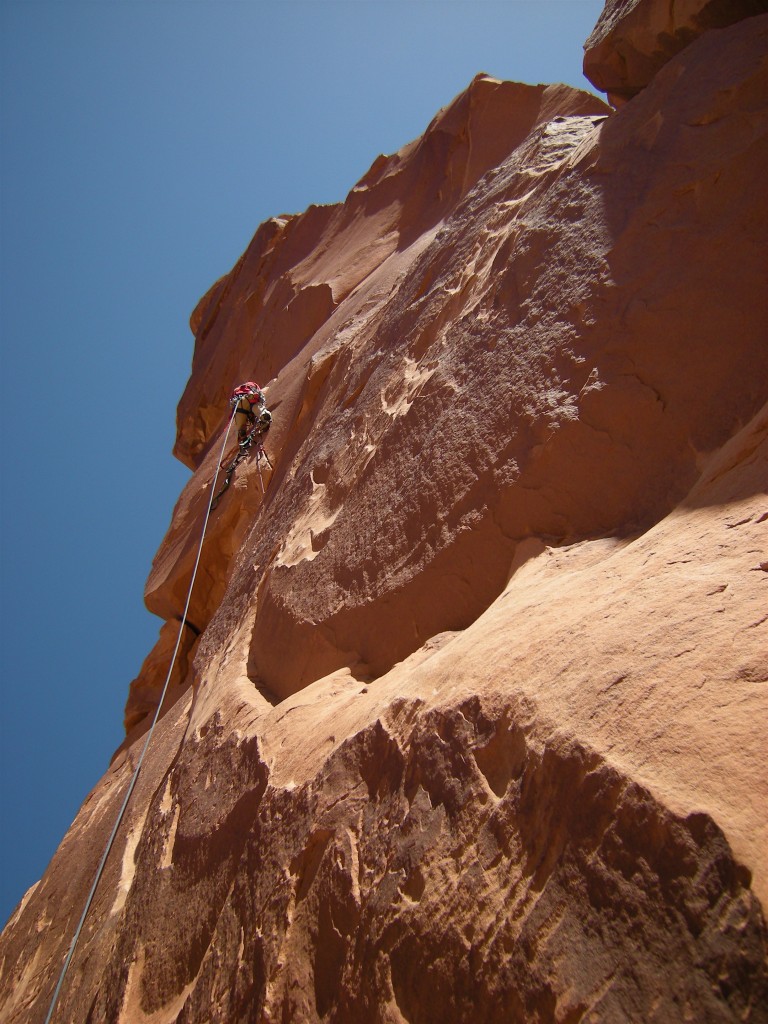 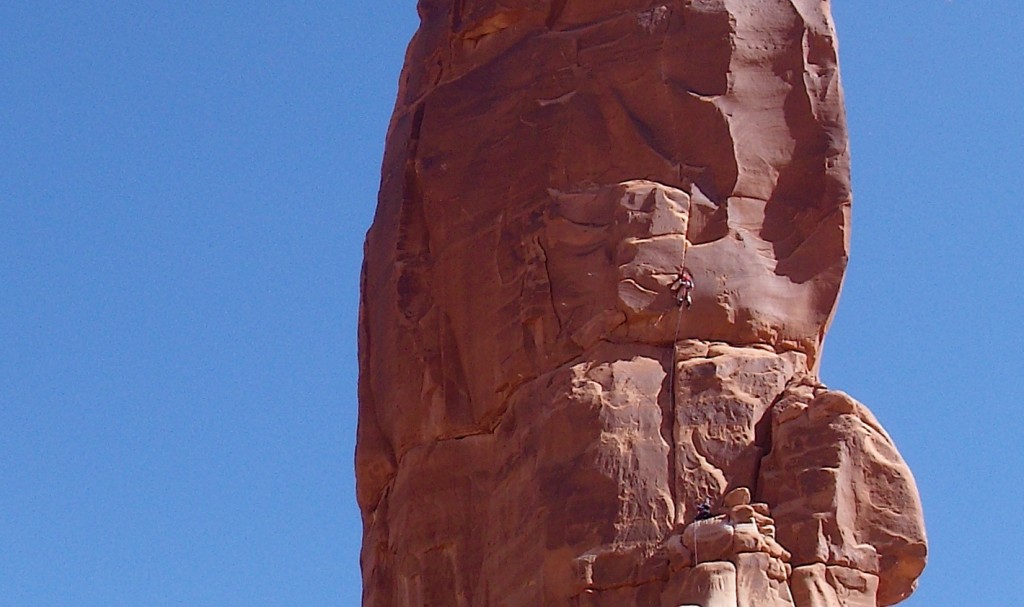 Yours truly leading pitch 2 (C1) of Zenyatta-Entrada belayed by Shirley. Butt shot of same instant in time is here (Apr. 2008). 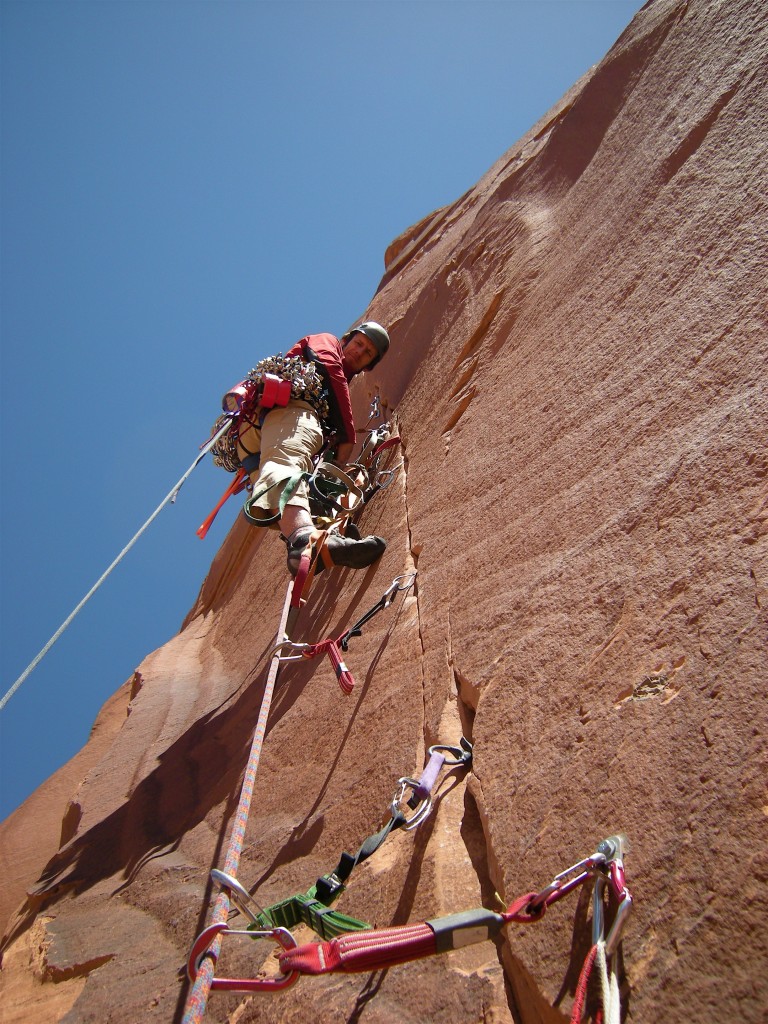 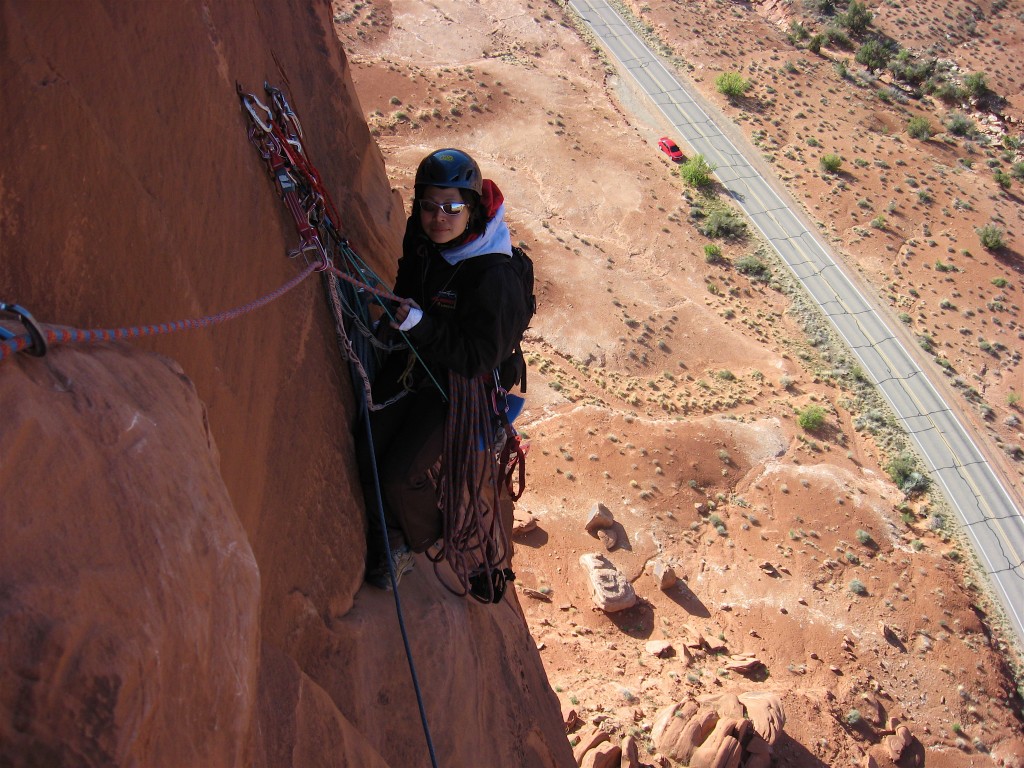 Shirley hanging out at the intermediate belay on P3 of Zenyatta-Entrada at the start of our day 2 (Apr. 2008). 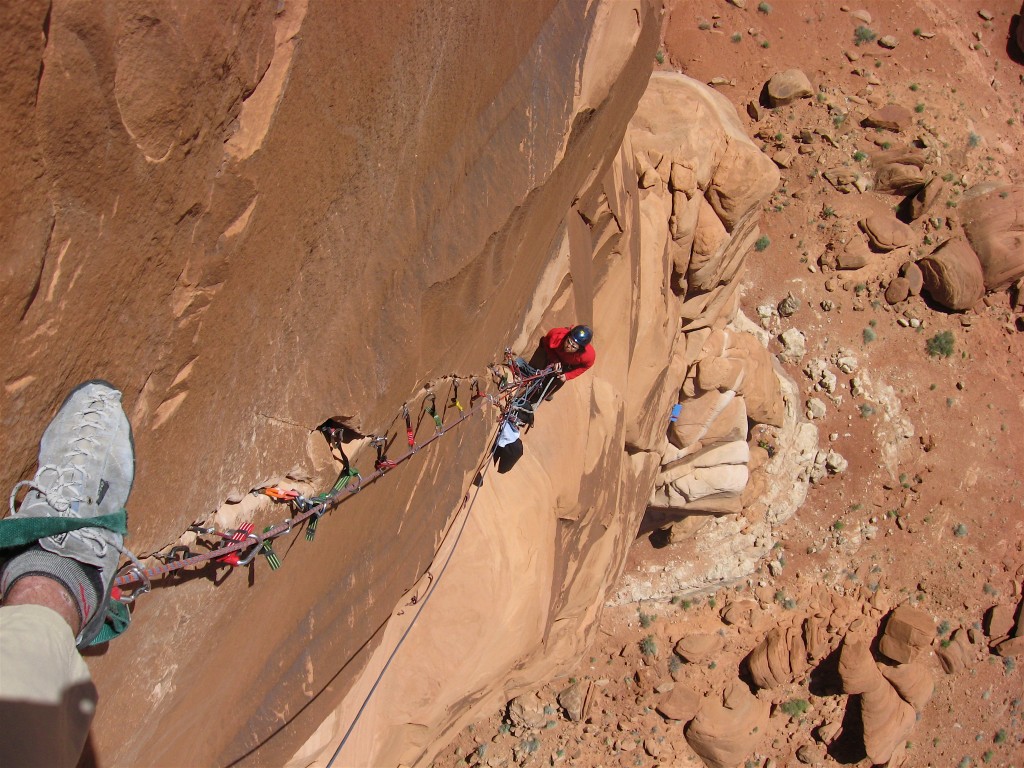 Looking down towards Shirley at belay from midway up P3 of Zenyatta-Entrada....yes, that's a few screamers but I'm chicken shit & not to mention I had them from another project. Shirley's blue belay seat is hanging atop P1 & our packs are sitting at the base (Apr. 2008). 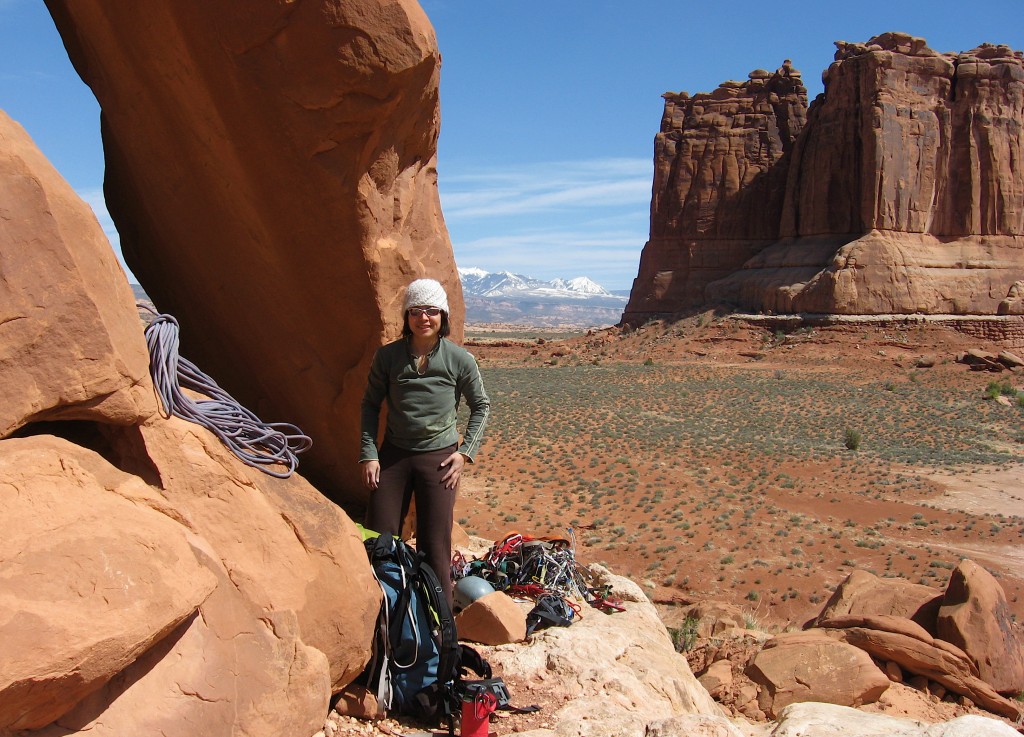 Shirley packing up at base of Zenyatta-Entrada on Saturday afternoon. The two Organ Towers and LaSal Mountains form the backdrop (Apr. 2008). 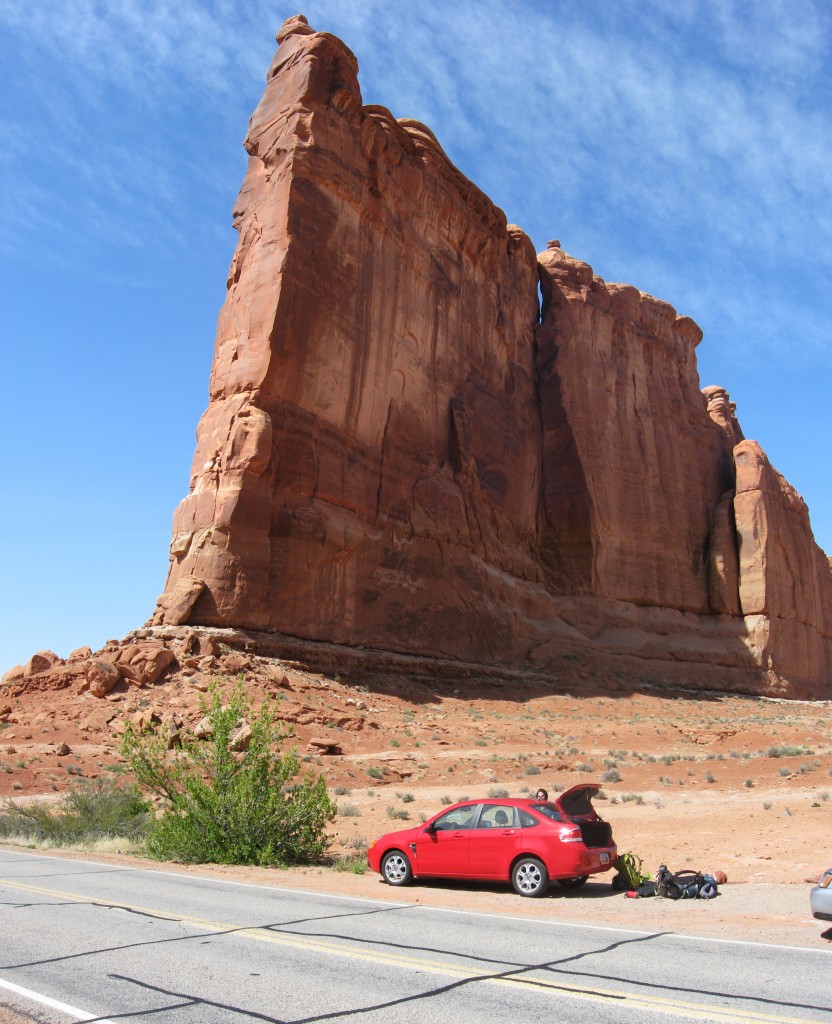 Shirley packing up the junk at the car with Tower Of Babel in the background. Zenyatta-Entrada climbs the sunny prow of the formation (~600 feet). The arduous approach to the base can also be seen (Apr. 2008). 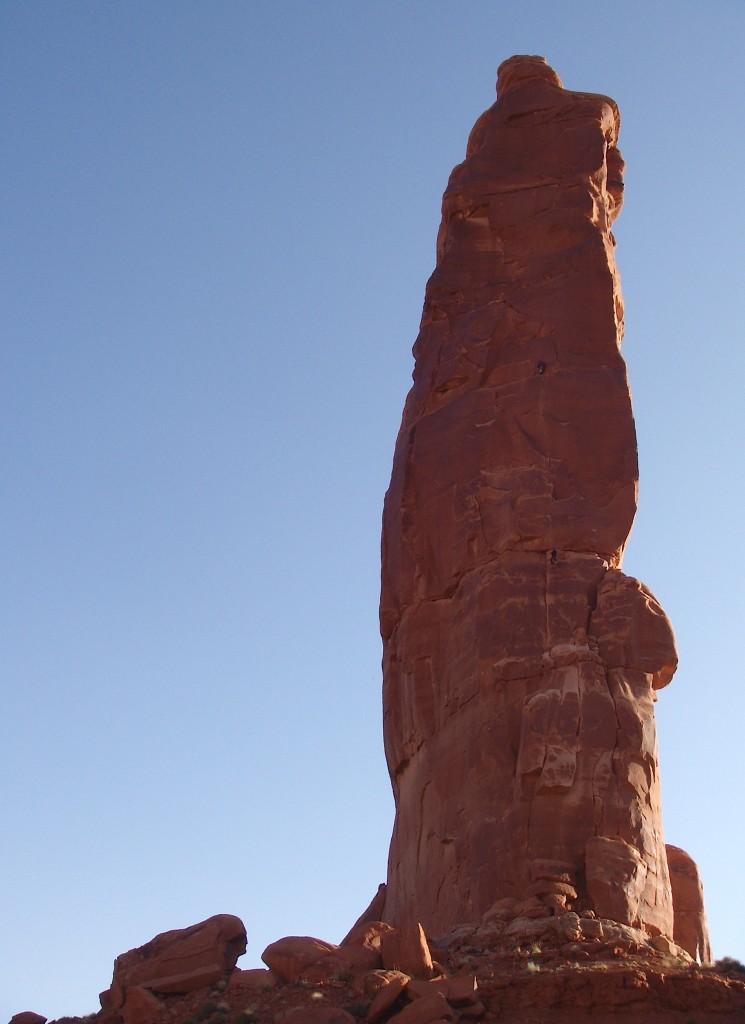 Jugging our fixed lines to our high point on Sunday morning on Zenyatta-Entrada. Shirley's midway up P2 while I'm at the intermediate belay midway up P3 - the hardness lies above (left facing dihedral/roof system; Apr. 2008). 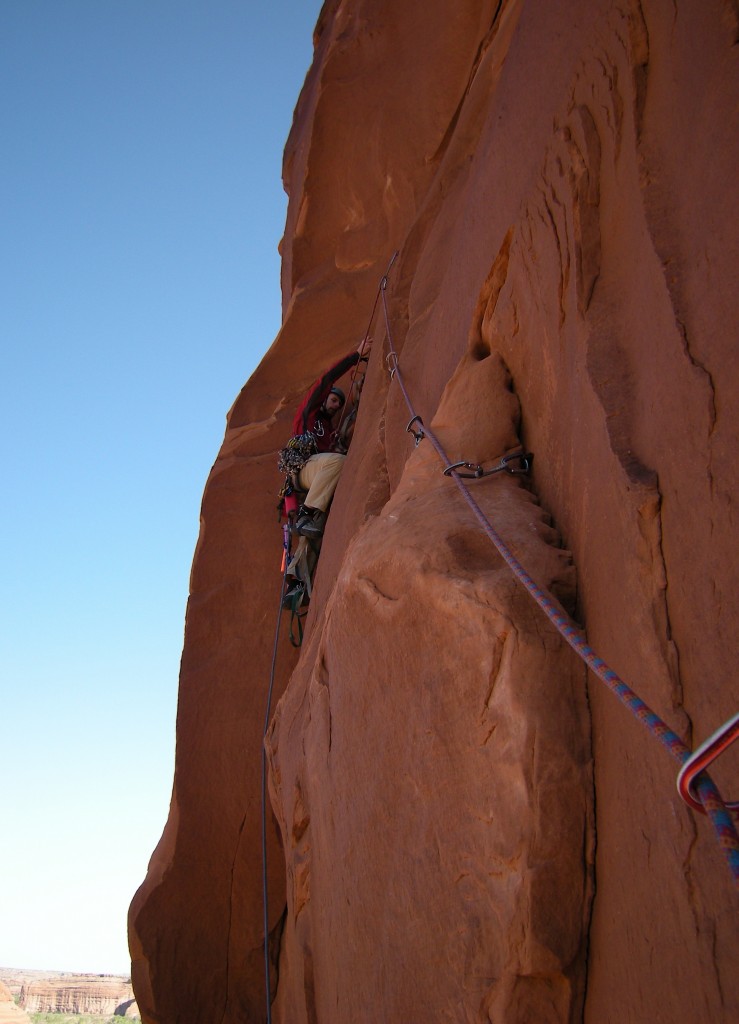 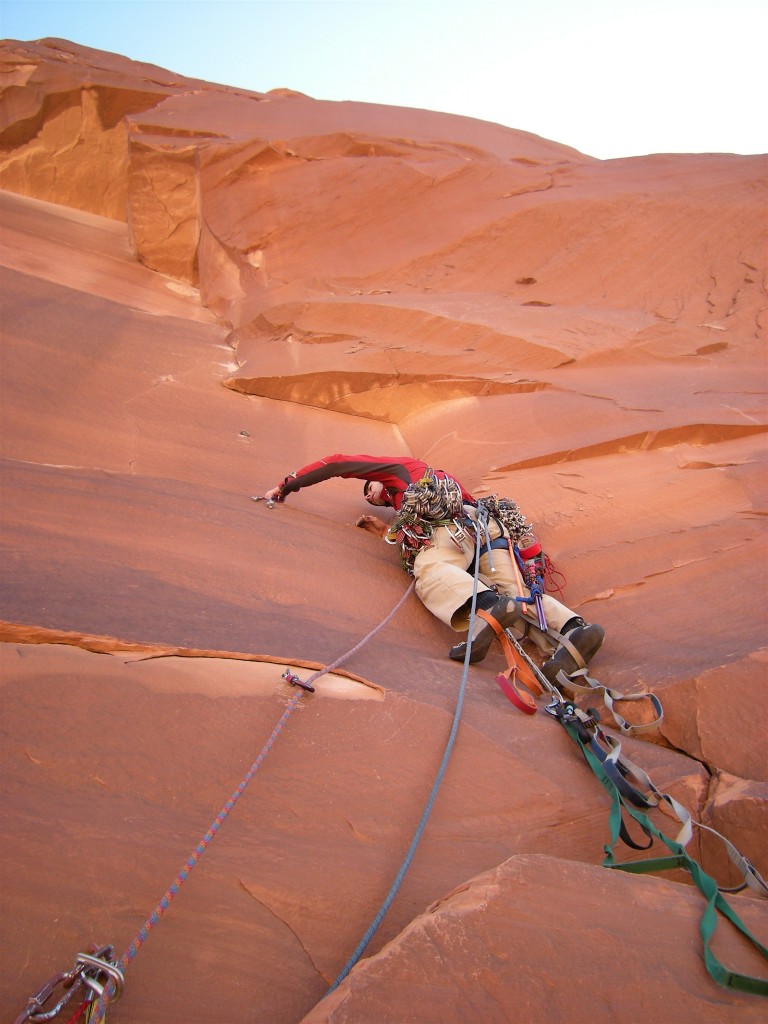 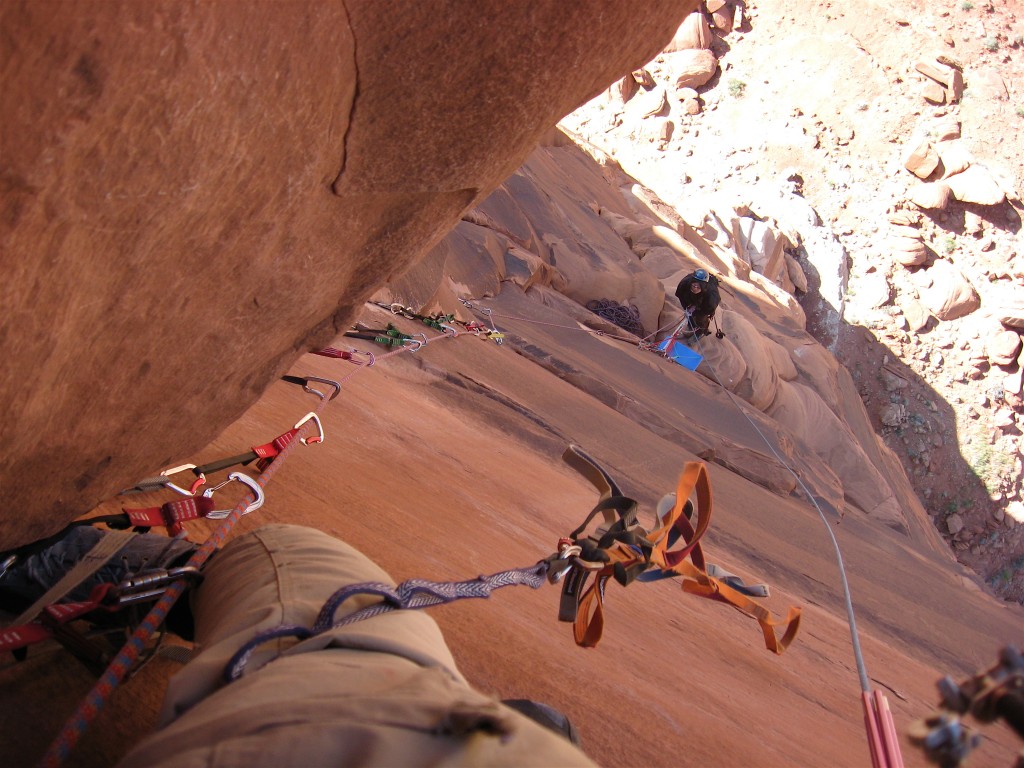 View down from the crux on pitch 4 (our P5) of Zenyatta-Entrada. Shirley's trying to estimate my possible trajectory (Apr. 2008). 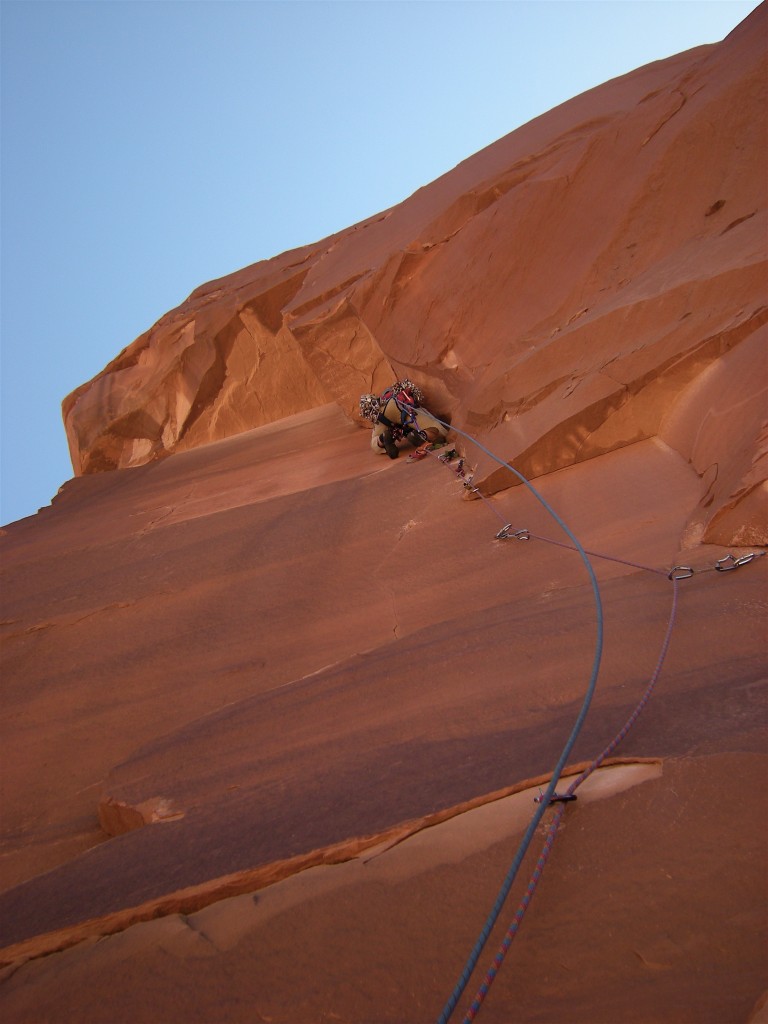 Leading the reported C3 crux pitch of Zenyatta-Entrada - a tiered roof/dihedral system above some ledges. This is a great position with the entire route below your feet once you turn the roof. Long range shot of the roof from below is here (Apr. 2008). 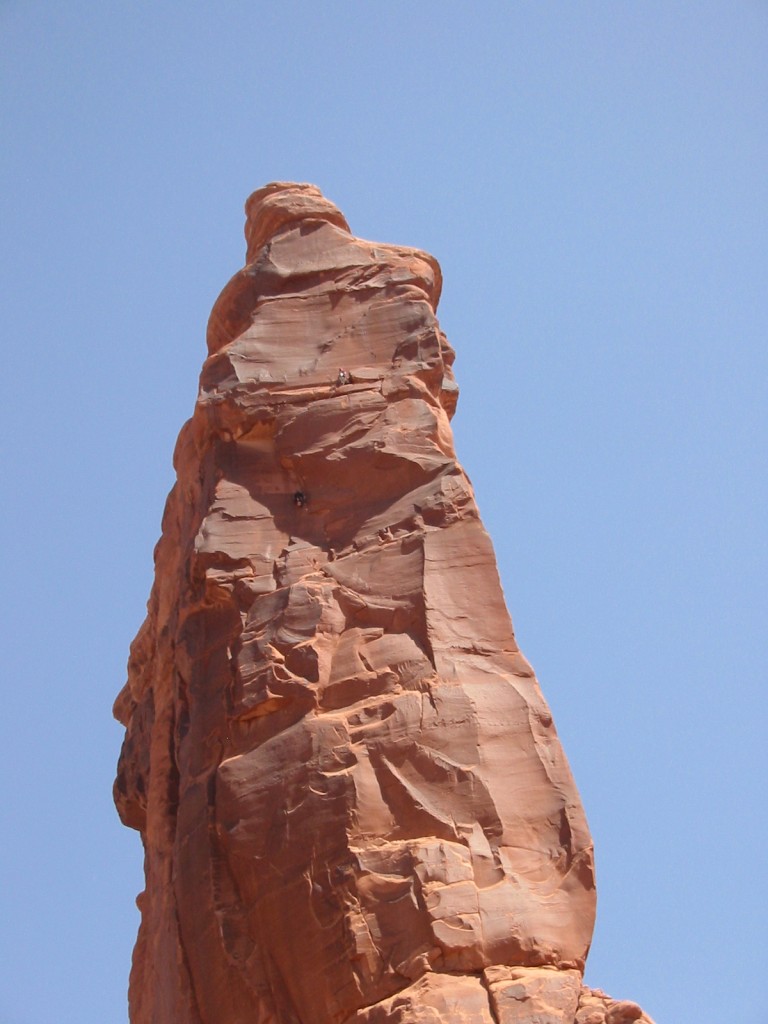 Shirley jugging under the crux roof on pitch 4 (our 5) of Zenyatta-Entrada. Shot was taken by a kind stranger from below who was also nice enough to email it to me. Credit goes to Adam T.. Posted with permission. Close-up of the said roof from below here (Apr. 2008). 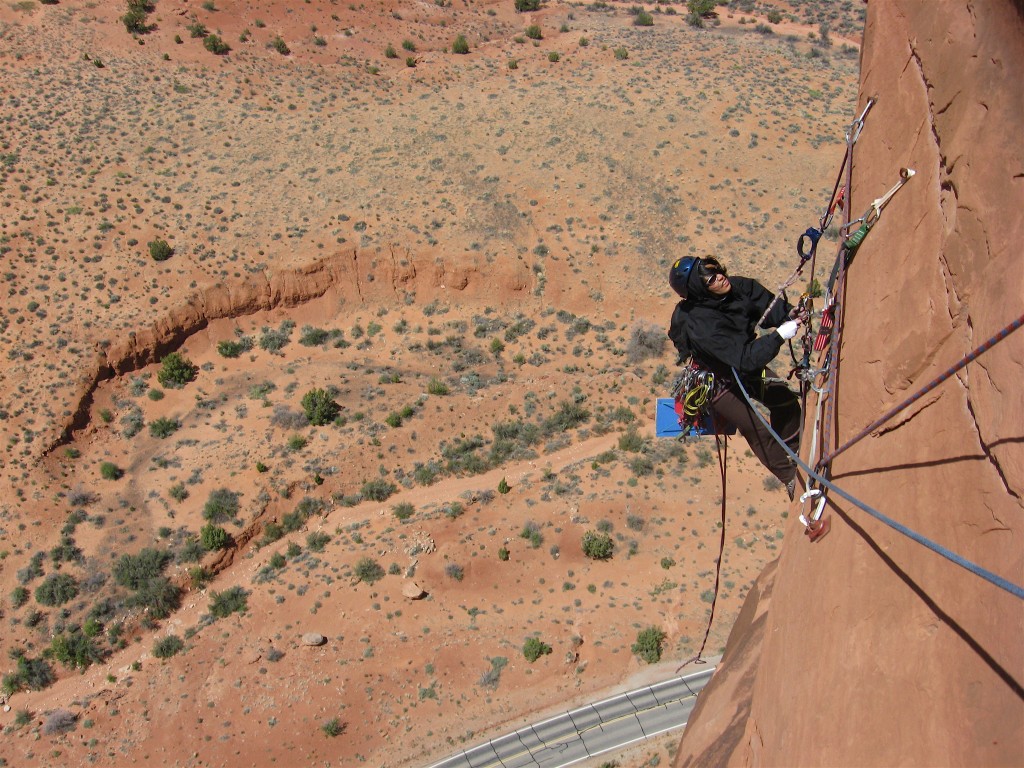 Shirley emerging from under the roof while cleaning on pitch 4 (our 5) of Zenyatta-Entrada (Apr. 2008). 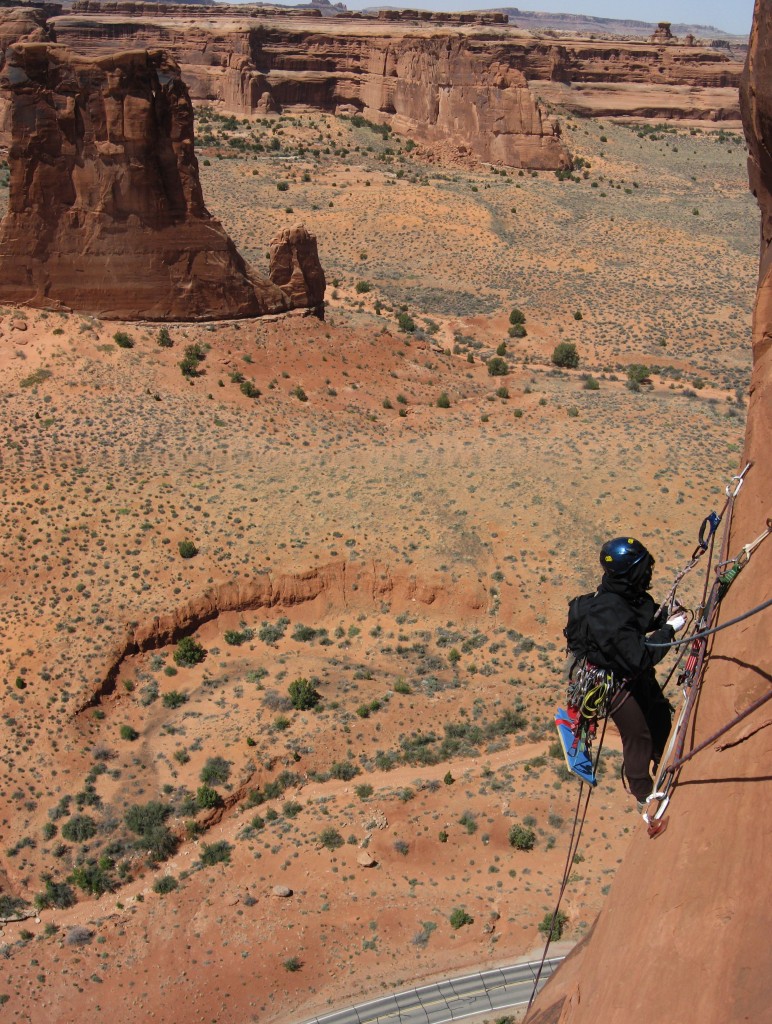 Shirley jugging pitch 4 of Zenyatta-Entrada with the Sheep and the Lamb keeping a lookout (Apr. 2008). 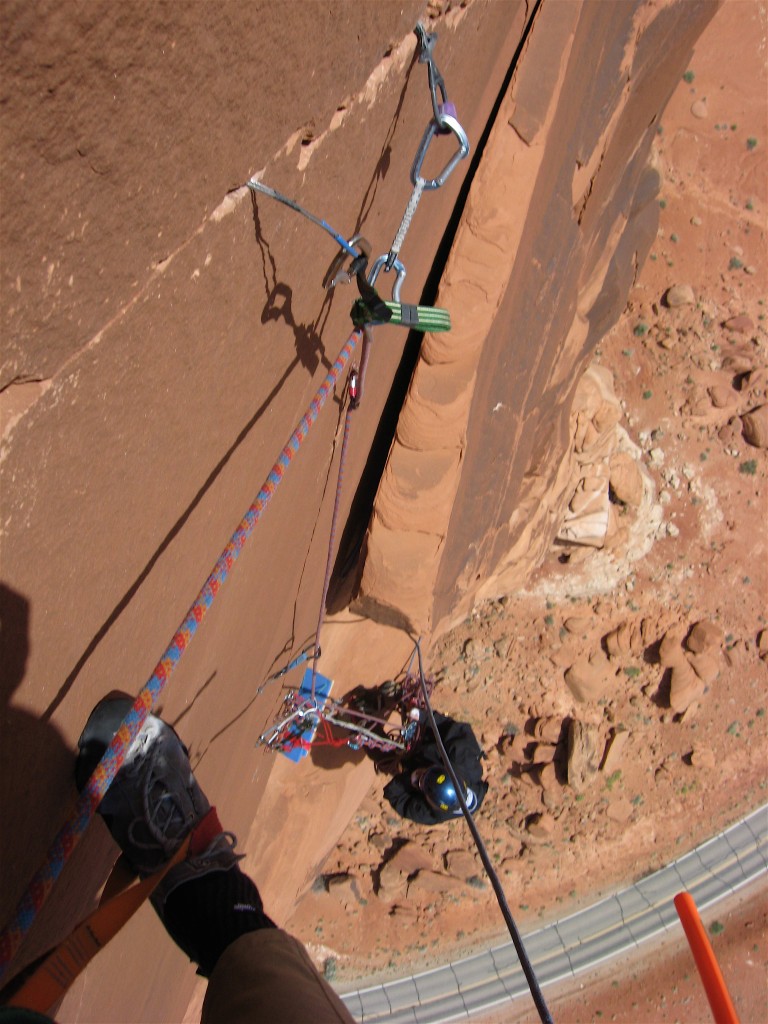 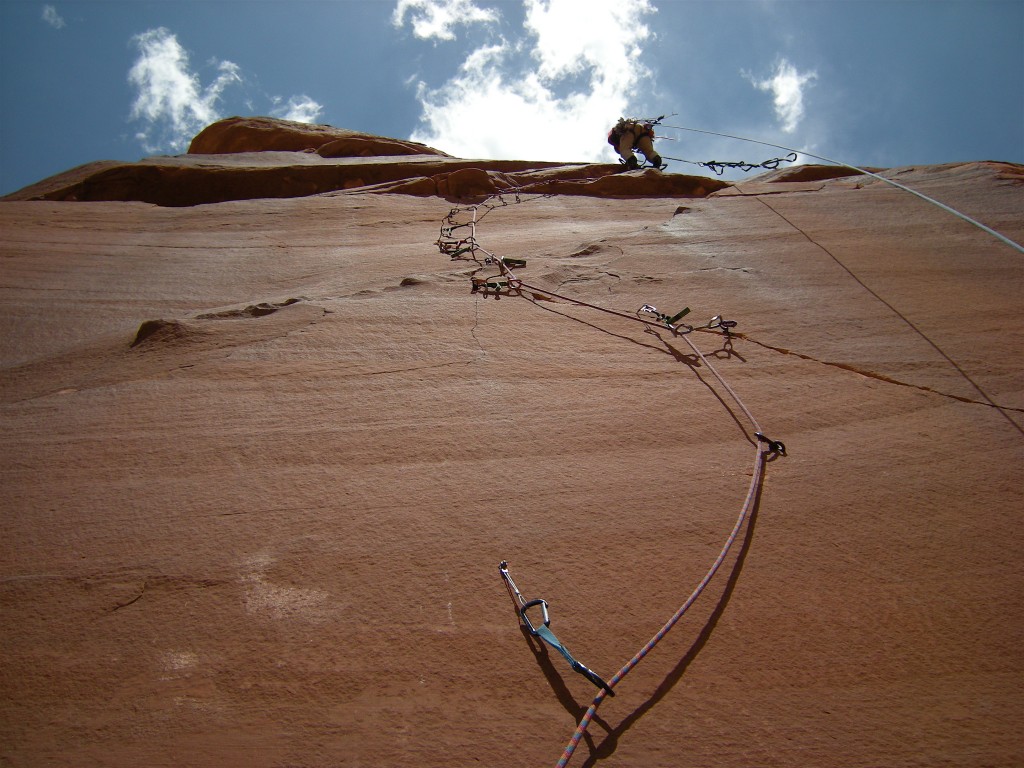 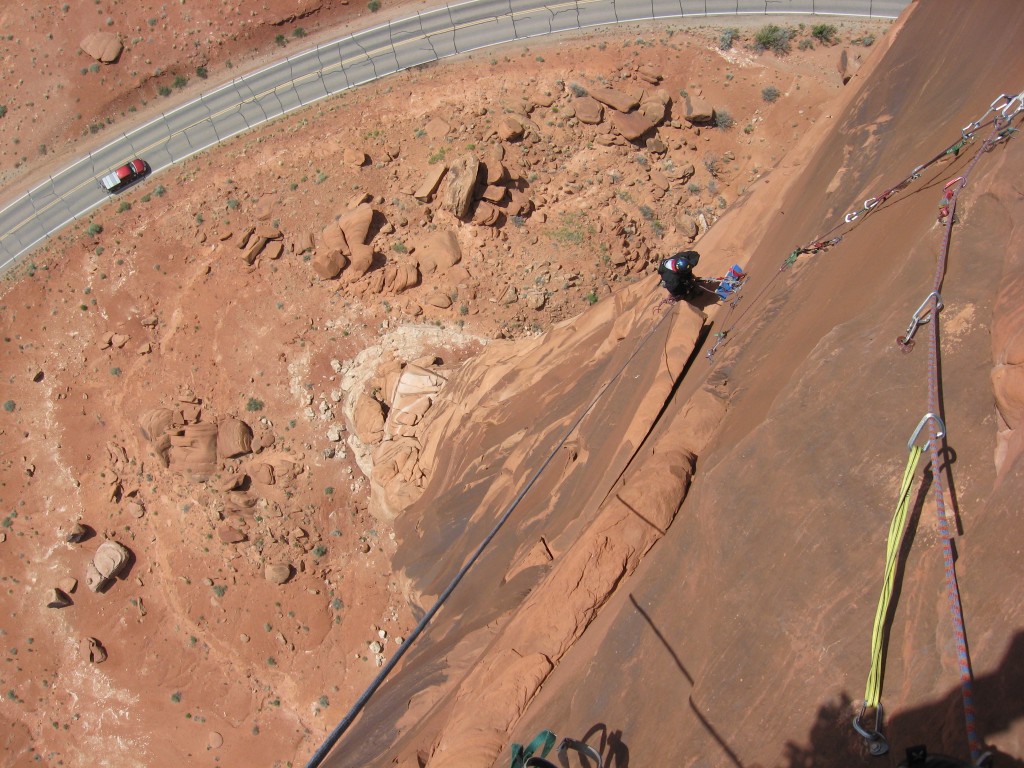 View down the route from the final steep pitch of Zenyatta-Entrada. You can see all the way down to our (green) packs at base some 500 feet below. This is the final bolt ladder above all difficulties to subsummit shoulder. This is really the first time on the climb you can tell you're on a prow of a huge formation - cool stuff (Apr. 2008). 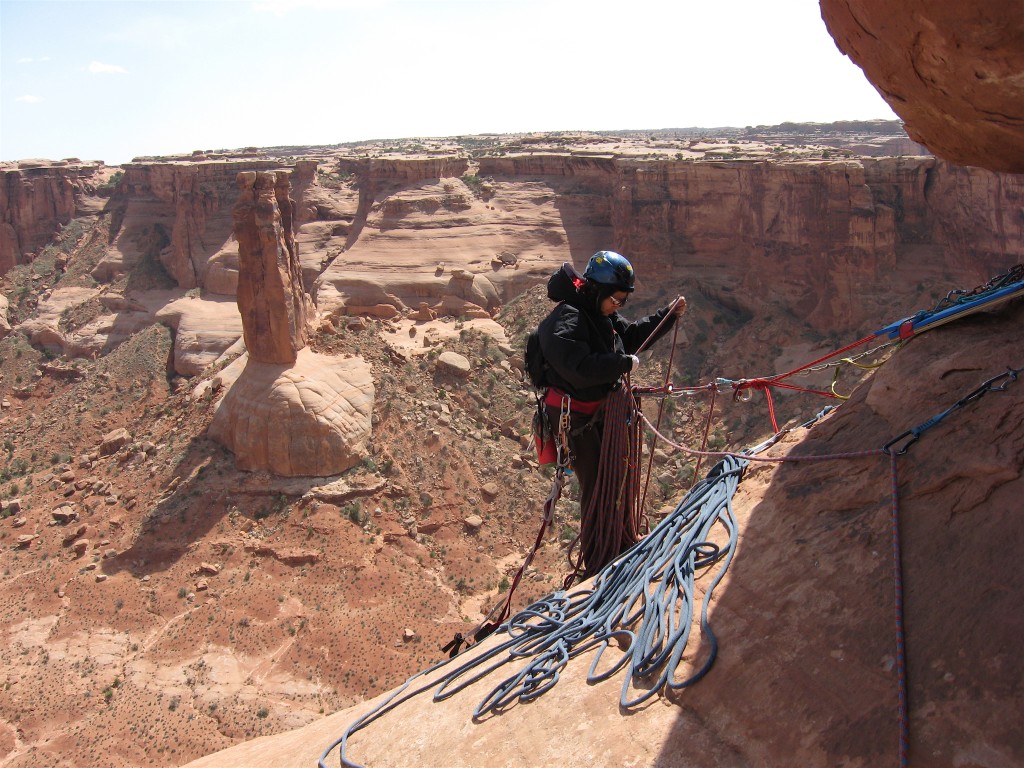 Shirley on the shoulder of Tower Of Babel atop pitch 5 of Zenyatta-Entrada. This is one short pitch below the summit. The Three Gossips are in the background (Apr. 2008). 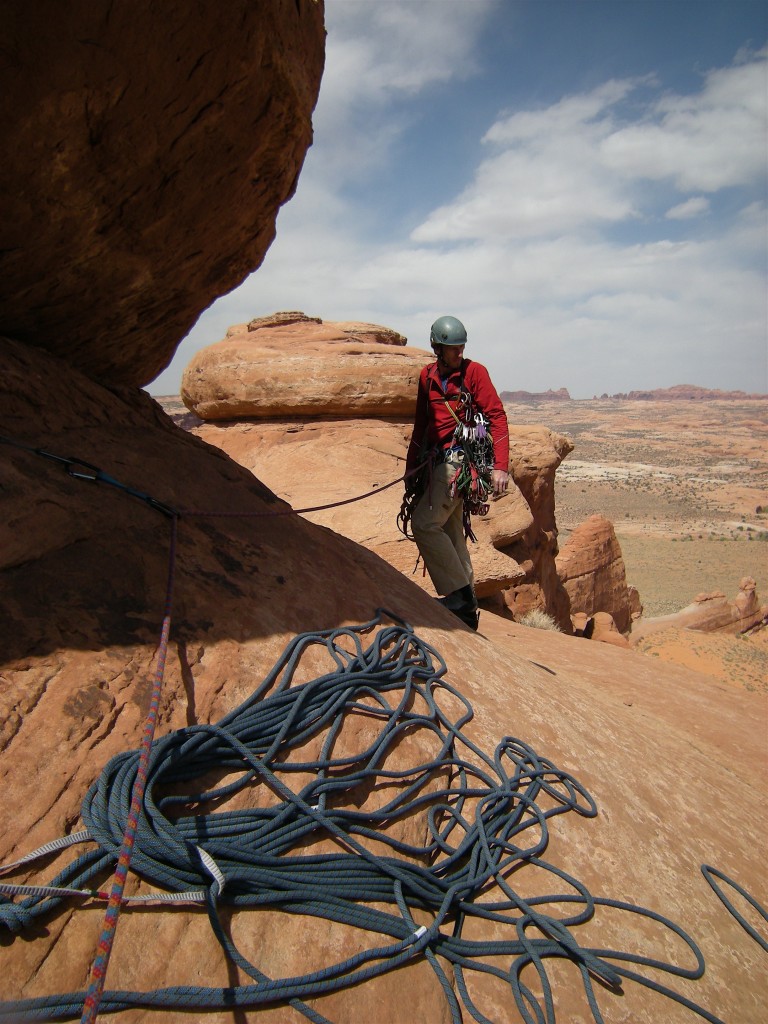 Yours truly on the shoulder of Tower Of Babel atop pitch 5 of Zenyatta-Entrada. The summit is a short distance above. Someone was yelling sh.t at us from the road again that day (Apr. 2008).

Shirley on the subsummit shoulder of The Tower Of Babel with the entire Courthouse Area of Arches N.P. spreadout below. On the left are the massive (West & East) Organ Towers; Park Avenue and Argon Tower (on its right side) are near center; summits of The Three Gossips are visible on right. A little piece of Queen Victoria spire is also likely showing but it would too much text to point out where (Apr. 2008). 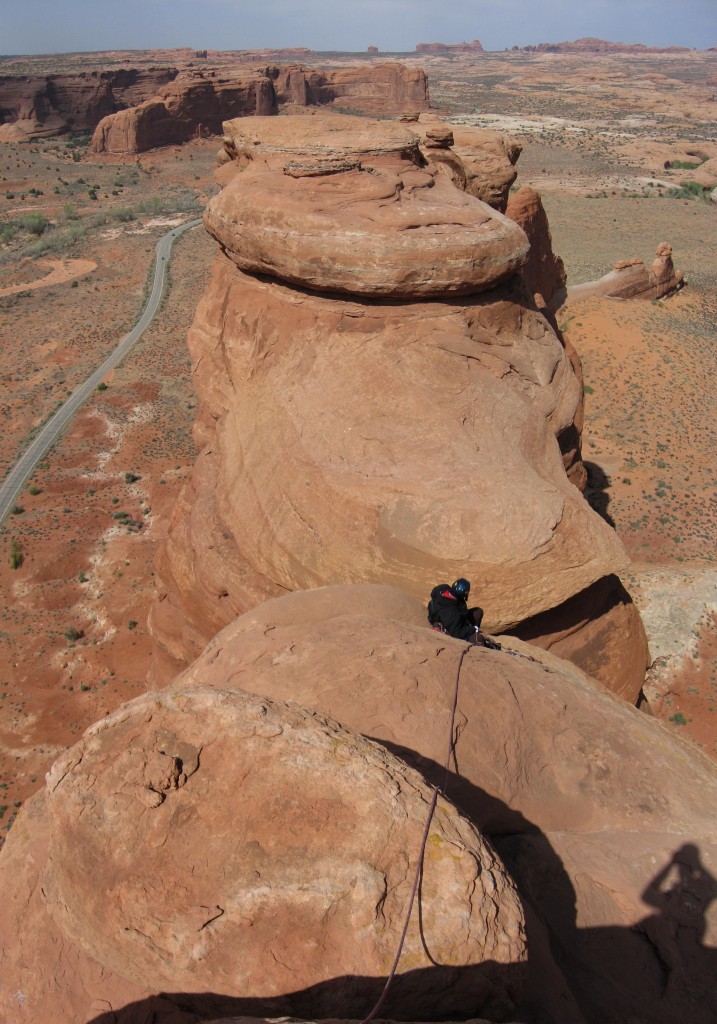 Top of Tower Of Babel - view from summit. Shirley is at the final belay of Zenyatta-Entrada route (Apr. 2008). 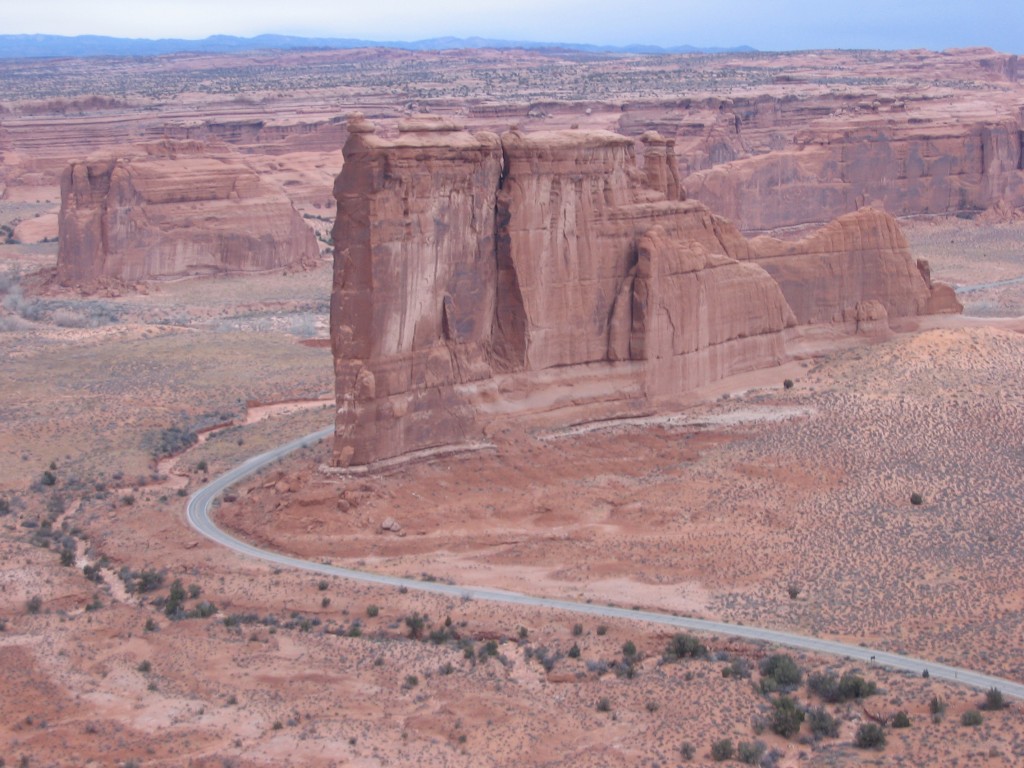 Tower Of Babel from the summit of Argon Tower. Zenyatta Entrada climbs the narrow face on the left side of the Tower. Photo taken on a miserably cold December 30th 2005. For view from Babel towards Argon, see here.